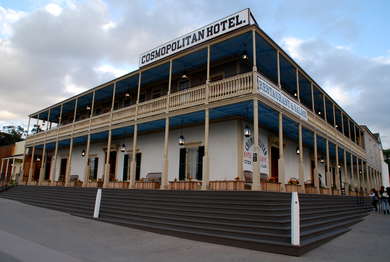 Established in 1769 with nothing more than a fort and a mission, Old Town is known as the birthplace of California. The Cosmopolitan Hotel has been around for much of its history, first as the grandest adobe home in the startup town and later, in the 1870s, as a stagecoach hotel built right on top of the original adobe. A distinctive veranda wraps around the second story of the Greek Revival-style building, which underwent a meticulous restoration in 2011 -- a project overseen by the state. The historic inn features Victorian-style guestrooms filled with American-made period furniture, an Old West saloon, and a restaurant that serves an afternoon tea. The staff wear old-timey costumes, as well, and are known for their excellent service.

YOU SHOULD KNOW The Cosmopolitan is supposedly one of the most haunted places in San Diego. The inn even made an appearance on the TV show “Ghost Adventures.”

The inn’s rooms are straight out of the Victorian era, with wood floors, decorative wallpaper, carved mahogany beds, parlor chairs, and gaslight chandelier reproductions. Some are on the small side and antique seating might not be to everybody's modern comfort standards, though.

YOU SHOULD KNOW Rooms do not have TVs because, you know, the Victorian era. (The hotel does offer complimentary Wi-fi though, because how would you survive otherwise?)

Talk about authentic. The bathrooms, which vary quite a bit by room, feature period touches like pull-chain toilets and copper freestanding tubs that are so tall they require a step stool to get in and out. Some have clawfoot tubs or showers. Be sure to inquire if you have a preference.

The 10-room in has a small reception area.

In the morning, the hotel serves hot coffee and tea with fresh-baked pastries.

Drink whiskey like you’re in the Old West at Cosmopolitan’s historic saloon, which features a carved wooden bar with a heckuva backstory. Built in Europe, it was shipped to the U.S. in the 1870s, and eventually purchased by Wyatt Earp, who had it sent to Tombstone, Arizona. By the time it arrived, Earp was long gone, and the piece was placed in storage for 130 years before finding a new home at the Cosmopolitan Hotel. We won’t judge if you wear a cowboy hat when you sidle up to the bar.

San Diego is easiest explored by car, but public transit is still a doable option. You can catch the San Diego Trolley at the Old Town Transit Center, a 5-minute walk from the Cosmopolitan Hotel. The trolley’s Green Line services Little Italy, Seaport Village, the Gaslamp Quarter, and the Convention Center. Also at the Old Town Transit Center are trains that run north, including the Coaster train, which stops in the coastal communities of Solana Beach, Encinitas, Carlsbad, and Oceanside; Amtrak’s Pacific Surfliner keeps going north through L.A. and beyond.

There’s no shortage of Mexican restaurants in Old Town, but Casa de Reyes (3-minute walk) is one of the most popular. The restaurant is set in an outdoor garden under an arbor and showcases live entertainment ranging from lively mariachis to folklorico dancing. If you’ve had your fill of Mexican food, Pizza Bella (3-minute walk) makes surprisingly good pizza, while Harney Sushi (3-minute walk) serves creative rolls and cocktails in a lively setting -- and it’s open until midnight.

You’ll find plenty of places to throw back a drink or two in Old Town, especially if that drink involves tequila. With ample outdoor seating, the popular Café Coyote (5-minute walk), is a good place to sip frosty margaritas or choose from around 100 tequilas that deserve to be sipped solo. Mariachi bands add to the lively vibe. If you’ve had enough with the agave-based beverages, Old Town Saloon (4-minute walk) is a brick cantina meant to resemble an old cowboy bar where you’ll find stiff drinks and sports on TV.

Staying at the Cosmopolitan Hotel is like taking a trip back in time to the Old West, from the classic Victorian furniture to the historic gleaming-wood saloon -- even the staff dresses in period clothing to keep the vibe going. And while Old Town has its own unique charm, you won’t feel stuck there since many of San Diego’s other attractions are within easy reach by trolley or car.