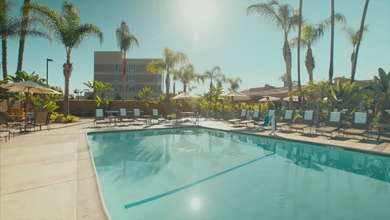 Located in Point Loma, just five minutes from the airport, the Holiday Inn Bayside is a budget-friendly option for families and business travelers. The guestroom decor is on the plain side, but the contemporary lobby is airy and filled with bright colors. A pool, shuffleboard court, ping-pong tables, and 9-hole putt-putt course keep the kids busy if they’re still not worn out yet after outings to SeaWorld or the San Diego Zoo. The hotel is in walking distance of Fisherman’s Landing, where sportfishing and whale-watching boats depart, and it’s also close to Shelter Island, which has a shoreline park and is home to Humphreys Half Moon Inn, which hosts an annual summer concert series on the bay. Walking and bike paths run along the waterfront.

YOU SHOULD KNOW The hotel offers a free 24-hour shuttle service to the airport and cruise terminal.

Guestrooms are pretty basic and somewhat dated, with taupe walls and bedspreads, blond wood desk and dressers, and pops of teal. The hotel’s poolside rooms look out on the pool and putting green, and include private patios or balconies. Upgraded executive rooms in the hotel’s Bayside Building feature bay and marina views.

Bathrooms are basic but clean, with a separate water closet, shower-tub combo, and toiletries by Bath and Body Works.

The hotel completed a major expansion a few years ago. The sleek four-story Bayside Building added 57 guest rooms and suites with bay and marina views, a grand entrance, and a 2,200-square-foot lobby with 18-foot teak ceilings. Bright contemporary furniture in bright blue, pale yellow, and white complement the airy space. The grounds got an update too, with tropical landscaping and a 23-foot-sculpture by nationally renowned artist Matt Devine.

A rectangular pool is bordered by chaise lounges and pretty landscaping, including colorful flowers and palm trees. The large pool area includes a shuffleboard and lots of comfy seating with heat lamps.

YOU SHOULD KNOW This is a family-friendly hotel, so you probably won't be catching any sun-baked afternoon naps by the pool.

The hotel offers a 24-hour shuttle service to the airport and cruise ship terminal. From this part of town, you’re best off having a car if you plan to do a lot of exploring. Head east on Rosecrans Street about 15 minutes to reach Interstate 5, or “The 5” as it’s known to locals. From I-5, a major south-north freeway, you can get to just about anywhere, either directly or via any number of highways and major roads.

There are several restaurants within walking distance, including Jimmy’s Famous American (3-minute walk) a popular pub on the marina that serves comfort food like burgers, nachos, and ribs, along with quite a few craft beer taps. On a breezy day, the outdoor patio seating with views of the harbor and fancy moored boats is really pleasant. Pizza Nova (3-minute walk) also has water views and outdoor seating, and an Italian menu with favorites like garlic knots, pasta, and gourmet pizza. A short drive away, Liberty Station (4-minute drive), a fabulously repurposed former naval station, has several worthy options as well.

Tiki lovers: You are close to Polynesian paradise. As it was developed in the ‘60s, the two-mile Shelter Island embraced a midcentury Pacific island theme. Decades-old booze shop Trader Mort’s Liquor (5-minute drive) is tikitastic, with tiki heads and a selection of hard-to-find rums. The Bali Hai (5-minute drive) is beyond its glory years but still has expansive bay views and a mean Mai Tai. And finally, Humphreys Half Moon Inn (5-minute walk), a resort with lush tropical landscaping and a steep A-frame, Hawaiian-style entry. Every summer, the hotel hosts Humphreys Concerts by the Bay, with acts ranging from Fleet Foxes and Weird “Al” Yankovic to Toto and Joan Baez. From the outdoor seating, you can see the bay -- many locals watch the concerts from the water floating in kayaks and inner tubes.

Holiday Inn Bayfront is a budget-friendly option that’s perfect for families and business travelers. The contemporary hotel, which underwent a major expansion in 2015, features an airy lobby with colorful decor and a teak ceiling and a pool with plenty of outdoor seating. The proximity to Fisherman’s Landing and the marina is also a plus. And while it’s a bit of a haul to San Diego attractions, there are lots of restaurants and bars nearby.