Once Upon a Time… in Hollywood, Quentin Tarantino’s latest film, chronicles the lives of hanging-on-by-a-thread A-list actor Rick Dalton (played by Leonardo DiCaprio) and his much-more-easygoing stunt double Cliff Booth (played by Brad Pitt) in Hollywood around the late 1960s, aka the Golden Age of Hollywood.

Once Upon a Time is very different from Tarantino’s other works—the gratuitous violence and ruthless motives ever-present in the likes of Kill Bill and The Hateful Eight have been tuned way down, and in their place are an air of melancholy and a methodical pace that allows the aforementioned characters (and the actors playing them) to live a little. Heck, the setting alone is, for lack of a better expression, a mood.

Perhaps most importantly though, the film showcases Los Angeles in a way very few movies do nowadays: as a destination. Can you think of the last movie—other than 2016’s La La Land—that checks that box? The Artist (2011)? Bowfinger (1999)?!

When the traffic isn’t horrific—that’s truly L.A.’s biggest caveat—the city can be quite beguiling, especially if you examine its history the way Once Upon a Time does. The locations were de-aged in the movie, of course, but here’s where you should head if you’re a fan of the 10th Tarantino flick and want to see the onscreen history for yourself, in person.

Cocktails. Steaks. Spaghetti. What more could you want? Homemade Chicken Pot Pie? They’ve got it. Lobster Ravioli? They’ve got that, too. The Los Angeles eatery that is Musso & Frank Grill has been serving an extensive menu full of fine cuisine since 1919 (a century!). In the film, Rick Dalton meets industry mogul Marvin Schwarz (played by Al Pacino) to talk business over drinks. Having recently dined there myself, this editor can confirm that the wonderful, accommodating service and expertly-shaken martinis are enough to warrant the establishment’s icon status. 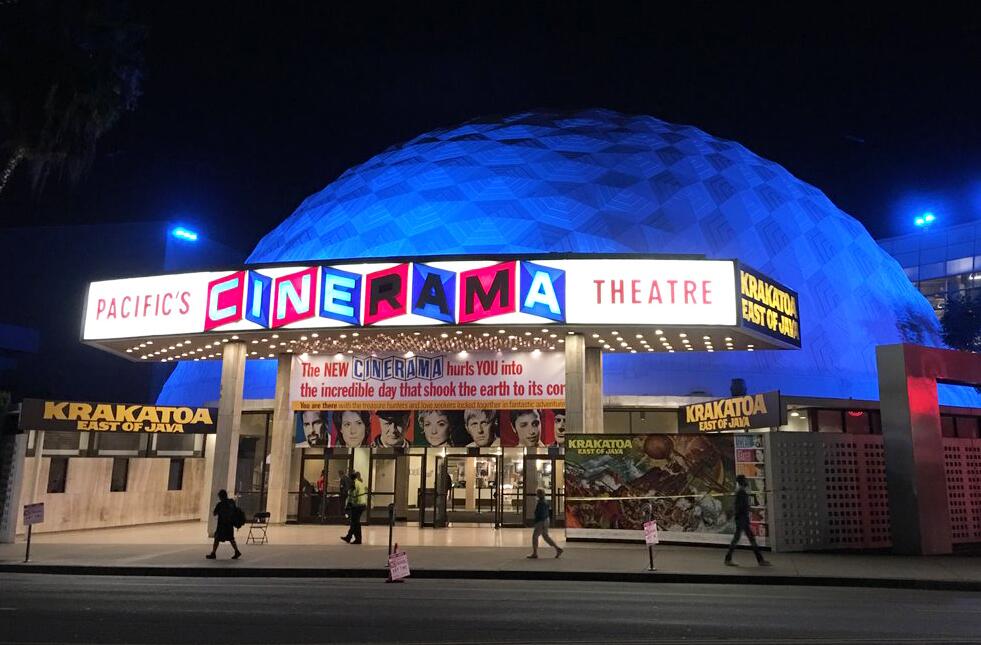 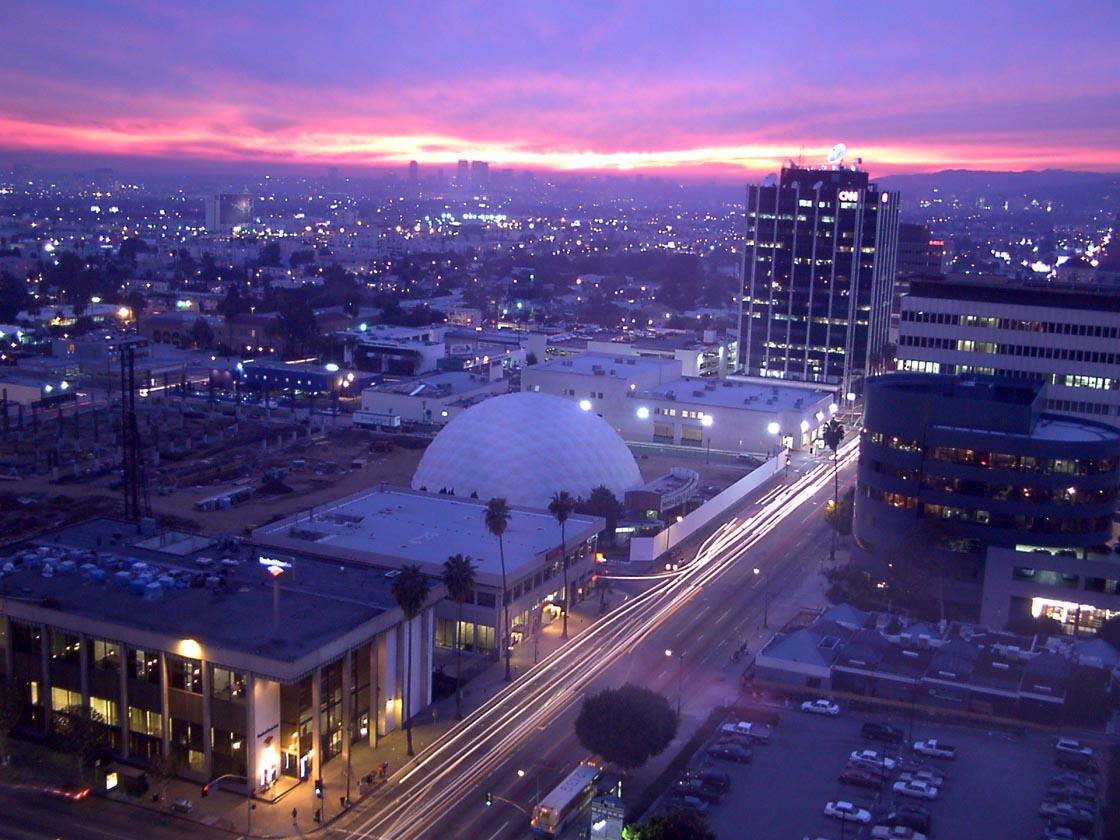 For Movie Buffs: Arclight Hollywood and Its Dome

Arclight Hollywood is a theater where the movie-going experience is cherished and protected by its employees, who ensure that the quality of the projection and sound in each theater is up to high standards. This is no more evident than in the theater’s Dome, which is instantly recognizable when characters cruise by it in OUATIH. Built in 1963, but “refreshed” in 2002, the hexagonal structure can seat over 800 guests and regularly houses Q&As with actors and directors immediately following screenings of their respective movies. The Dome is equipped with a special projector that allows 70mm films to be watched on its palatial screen (70mm is a type of film that has a higher resolution, which allows for a much clearer image compared to the images projected onto screens in the average chain theaters). Additionally, The Dome’s 44 computer-placed surround sound speakers complement the structure’s curved shape in a way that equates to a completely unique viewing experience. 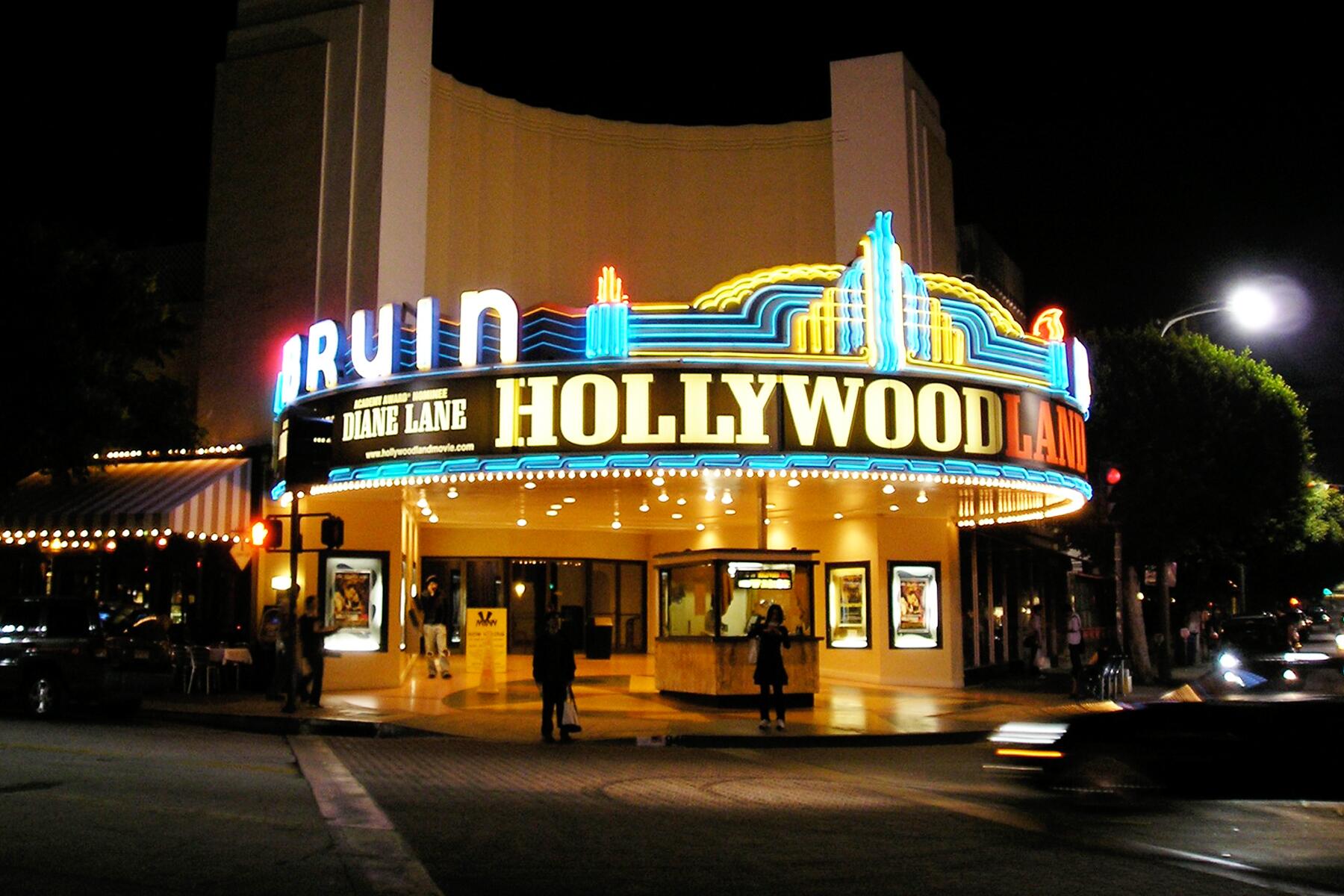 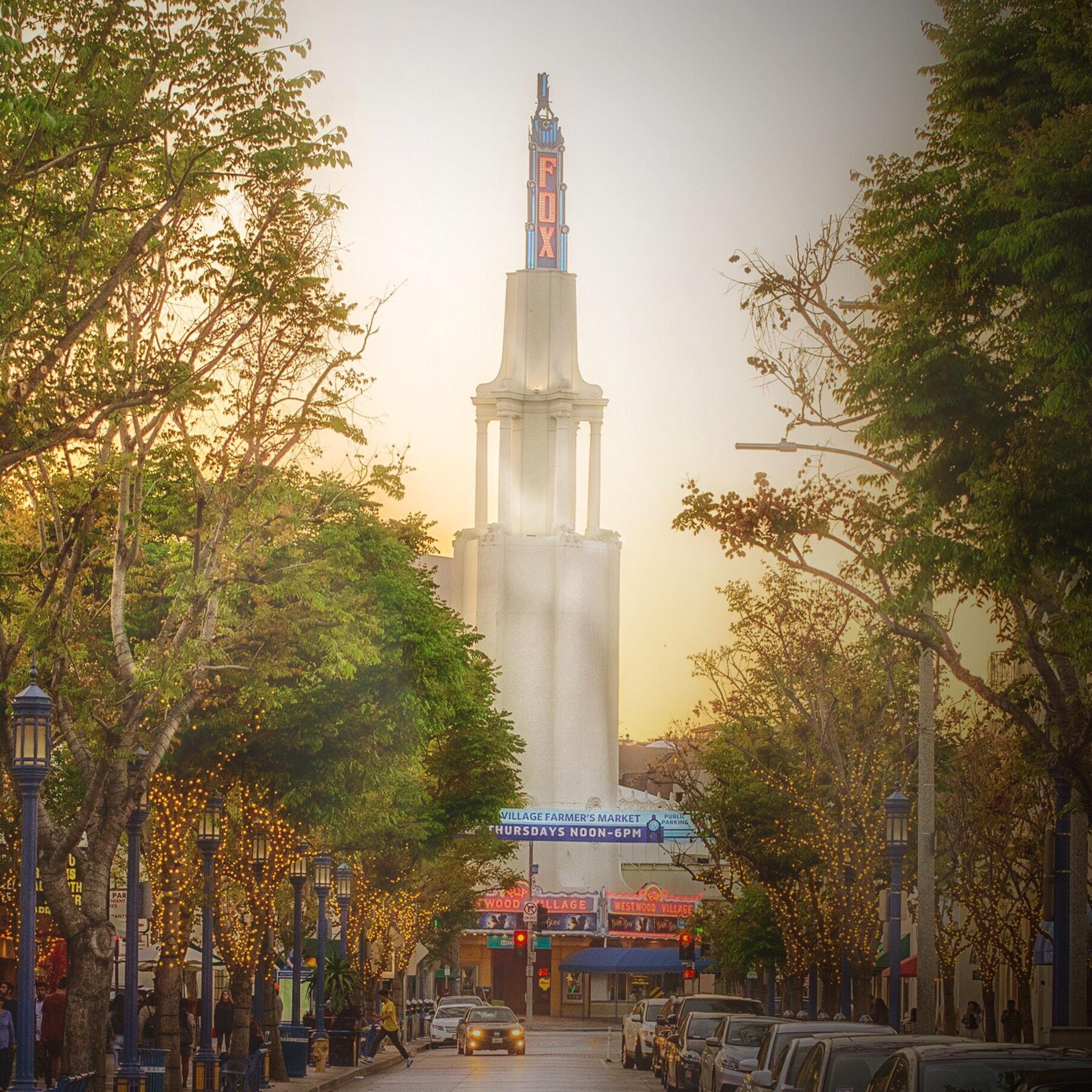 Located near the UCLA campus, this landmark shows a single movie at a time. Even if it’s not a flick you’re aching to see, The Regency Bruin Theater, a certified Los Angeles Historic-Cultural Monument, is still worth visiting as its classic marquee signage will surely conjure up stars in your eyes. The air of nostalgia surrounding the box office—which has seen its share of red carpets since opening in 1937—is almost tangible. In a recent interview, Once Upon a Time producer Shannon McIntosh said the crew found pictures from the time and “if you look at the marquees on the theaters, those have movies that were actually on the date that it would’ve happened.” Westwood, the neighborhood in which the theater is located, is super walkable, as well, so dinner and drinks after the movie will make for a wholly satisfying night out.

For the Tourist: Starline Bus Tour

Sure, this is perhaps the most cliché offering on this list, but if there’s a way to cram in all of the flashy attractions and locations in Los Angeles, you should probably hop on. The well-known company offers several tours with a focus on Hollywood, such as the Hollywood420 Celebrity Tour—which includes a one-hour celebrity homes tour and a glass blowing demonstration—and a “Hop on Hop off” tour that will have you stopping by/exploring the TCL Chinese Theater, Grand Central Market, and Santa Monica Pier.

El Coyote first opened its doors in 1931. And, while it has since relocated, the business is still going strong, serving a (reported) average of 1,000 meals a day, complemented by what the LA Times calls “the best margaritas in the city,” which Sharon Tate (played by Margot Robbie) indulges in Once Upon a Time’s latter half. The restaurant’s eclectic aesthetic—Christmas lights are left up all year round—includes a wall lined with autographed photos of movie stars who stopped in for a bite. And quite a few stars—from John Wayne to Ricardo Montalban to Princess Grace of Monaco—have stopped in. 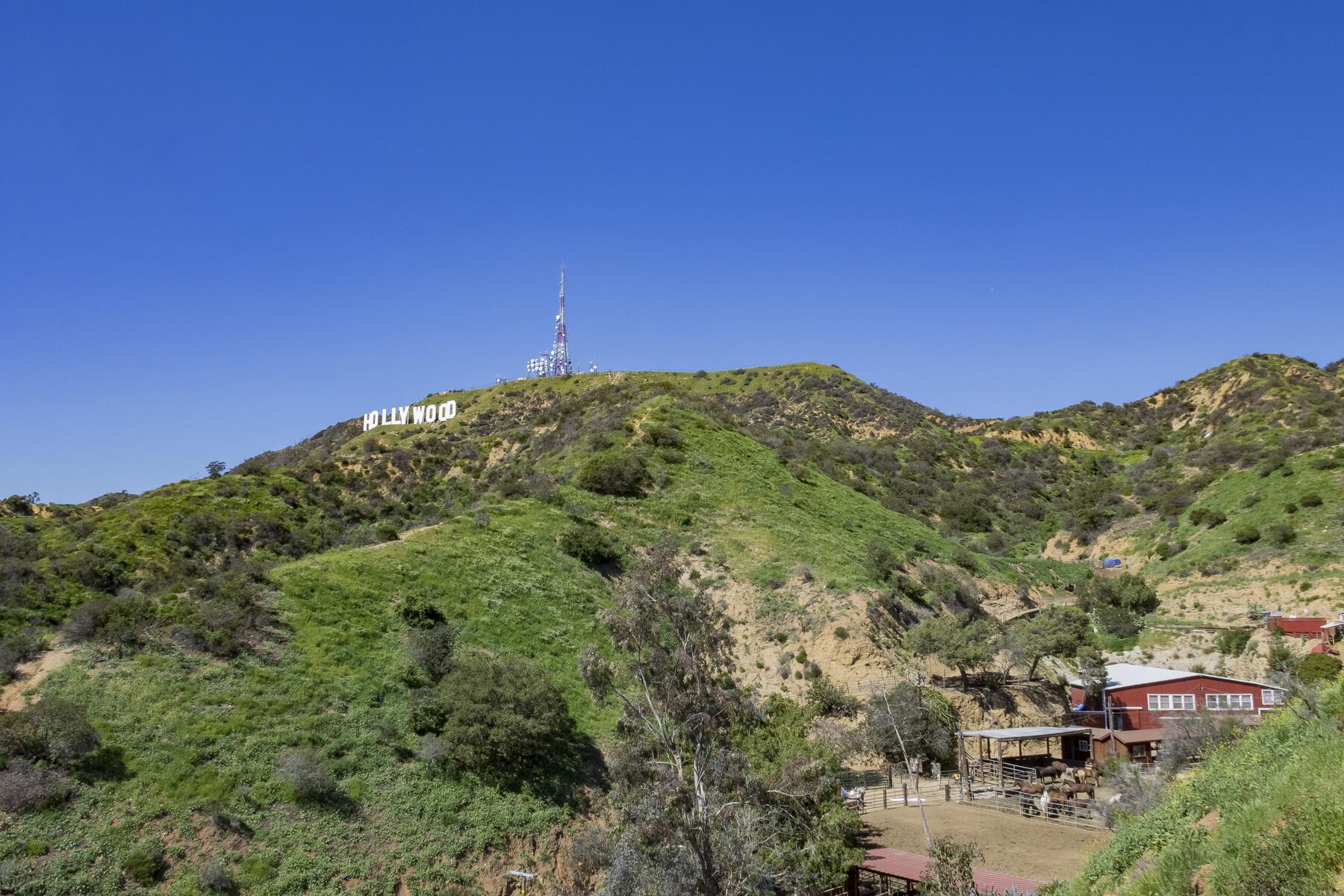 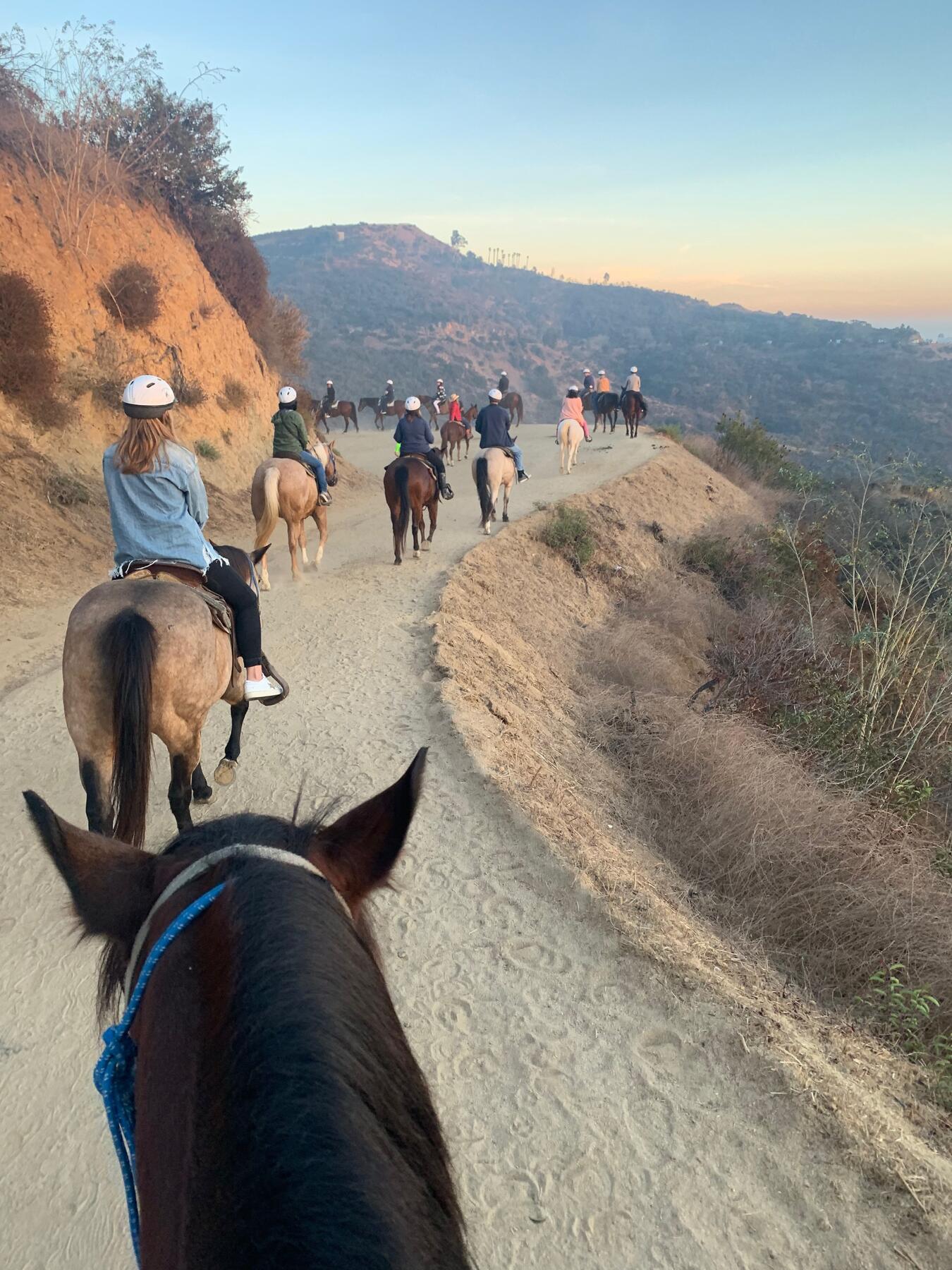 For Fans of Views: Sunset Ranch

Have you ever wanted to see the Hollywood sign? OK, so you’ve seen it. But, have you seen it while riding on a horse through the Hollywood Hills? It’s not quite the 55-acre Spahn Ranch from the movie where Cliff Booth kicks a lot of Manson-follower ass, but it’s certainly the next best thing. There’s a one-hour tour (you’ll get views of the L.A. Basin and the Hollywood sign), a two-hour tour (you’ll ride to the top of Mount Hollywood, where you’ll score some truly remarkable views), and there’s a Best View & BBQ tour (which is exactly what it sounds like). If you’ve seen Once Upon a Time, you know that that third offering is probably the most “Cliff” choice of the lot.

While you won’t necessarily see the landmark spots from Once Upon a Time comparable to the ones above, a walkthrough of a studio lot should certainly be on your list of must-sees when visiting LA. Actually, the lots are landmarks in and of themselves and this one’s especially fitting as Sony distributed the movie! You’ll get a taste of Old Hollywood as you traipse past the (original!) Yellow Brick Road, peek at multiple soundstages where the “magic” happens, and even get the chance to visit the sets of current hit shows like Wheel of Fortune and Jeopardy.

Owned by Tarantino himself, The New Bev has become a go-to for cinephiles in L.A. The space opened in 1929 as a candy store and has, over the decades, gone through several redesigns to suit its different purposes. Tarantino bought the property in 2007 to save it from the redevelopment. “I want The New Beverly to be a bastion for 35mm films,” Tarantino has said. “I want it to stand for something. As long as I’m alive, and as long as I’m rich, The New Bev will be showing double features in 35mm.” Despite having come and gone from mainstream theaters (its original theatrical release was July 26), Once Upon a Time… in Hollywood is still showing here! It’s also now available on Blu-Ray, DVD, and Digital. 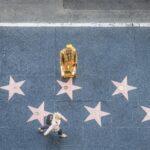