From Echo Park to Koreatown, West Hollywood to Century City, Marina del Rey to Beverly Hills, greater Los Angeles is one of the most exciting food cities in the country right now. A list of all the best eating and drinking experiences in the City of Angels could fill a dictionary; here are five favorites—some new, some institutions, all absolutely essential. 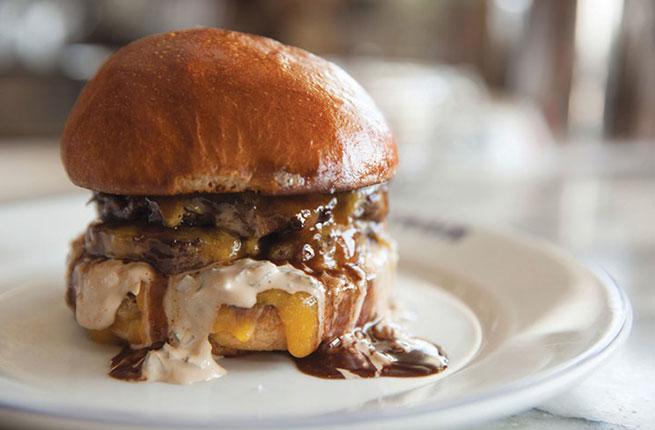 Ludo Lefebvre first gained notoriety in L.A. for his LudoBites pop-up dinner parties. These days, after teaming up with chefs Jon Shook and Vinny Dotolo (Animal, Son of a Gun), he runs three restaurants in the city: Trois Mec, Petit Trois and Trois Families. Each is different; each is worth a visit, although the original is by far the most difficult reservation to secure. Trois Mec resides in a Hollywood strip mall beneath a blinking neon sign for its former tenant, Raffallo's Pizza. Seats for the 6 and 8 pm seatings each night are sold through Tock and go for $85, which gets you five unusual courses (recently, carrot tartare and king crab buried in tangy sushi rice) set to circa-1990s hip-hop. Next door, Petit Trois (average main $27) is the dark, loud, high-energy bistro of your dreams. There's a handful of tables and a bar fronting an open kitchen where Lefebvre's crew crushes classics like steak frites, buttery omelets, vampire-repelling escargot, and a bordelaise-drenched burger. It's walk-in only, so go at off hours. Trois Familia (average main $12) is the newest member of the group, a sunny breakfast-and-lunch-only spot in trendy Silver Lake with communal picnic tables, melon-hued walls, and drop ceilings. The menu here riffs between French (electric lemon crêpes) and Mexican (a fantastic Milanesa de pollo), and the chances for a celeb sighting are high. Hey, Pete from The League! 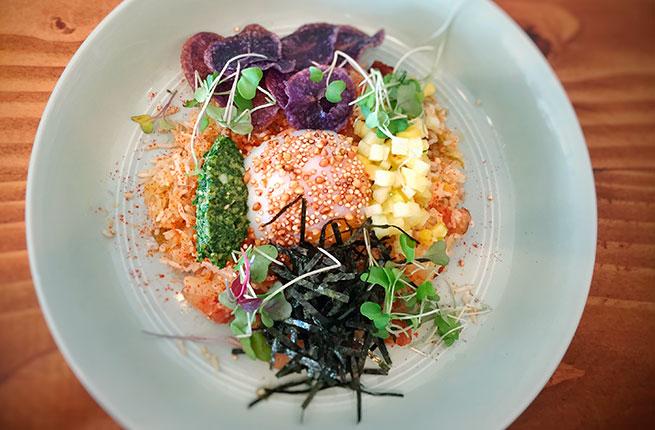 Korean-born Kwang Uh and Matthew Kim, the chefs and partners at Baroo (average main $12), would probably shudder at the word, but it’s hard to find a better one to adequately express the thrilling pastas at this stripped-down, idiosyncratic hole-in the-wall slotted like a paperback between a 7-11 and hair salon in a forlorn Hollywood strip mall. Uh and Kim’s wavy, tagliatelle-like noodles would pass muster at the best Italian restaurants in the country, but dishes skew East with components like gochujang-enriched oxtail ragu with puffed beef tendon. Jars of assorted pickles and kimchi decorate the stark white room and show up all over the menu in grain bowls and on salads: pineapple kimchi, onions scented with rose petals, passion fruit kraut, shiso beets, and more. Uh, who worked for Daniel Boulud and Nobu Matsuhisa and did the obligatory Noma stage before striking out on his own, calls Baroo a “freestyle experimental kitchen.” The joyful sense of creativity that powers the place earned it a spot on the James Beard Foundation’s semifinalist list for Best New Restaurant. If you dine at only one restaurant in L.A., make it this one. 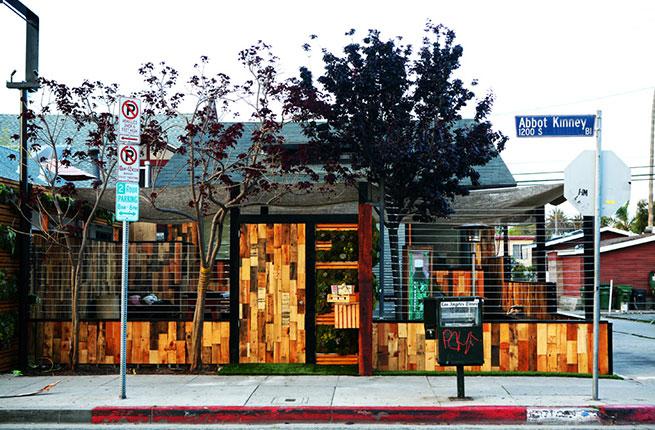 Lined with bungalow boutiques, pop-up craft markets, and fashion labels high-end and ragamuffin, the diagonal boulevard slicing through Venice Beach is so hip, it’s almost a caricature of itself, as if any day someone will announce the publication of an ironic shelter magazine dedicated to the lifestyle of its inhabitants. That said, go there. The mile-and-change stretch is the best drag in L.A. for eating and drinking. Abbot Kinney’s core edible and drinkable attractions fall between Broadway Street and Venice Boulevard, from the perpetually thronged Intelligentsia and Blue Bottle outposts to breezy, seafood-focused Salt Air (average main $29) and ZenBunni, a biodynamic chocolate shop hidden down an alley. Portland, Oregon’s Blue Star Donuts and Salt & Straw Ice Cream have set up shop on Abbot Kinney. But you really can’t talk about this street without mentioning Travis Lett and his restaurant, Gjelina (average main $23). Open all day and always busy, the eatery deals in stuff like bottarga-dusted burrata, heirloom lettuce salads, and duck confit with mandarinquats. The thin-crusted pizzas are remarkable and—if you can’t bear the wait—available to go at GTA (Gjelina Take Away). 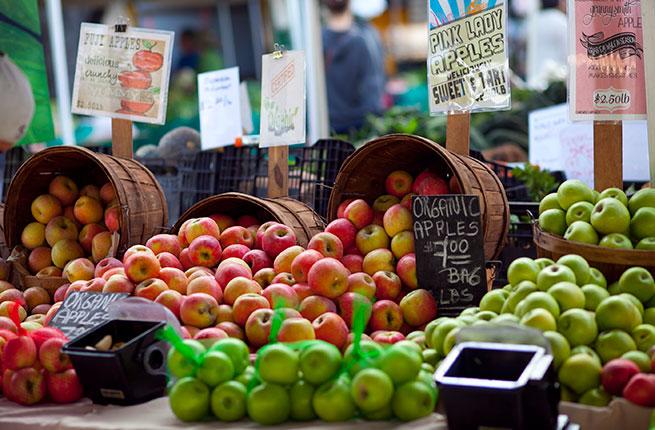 Celebrating its 25th anniversary this year, the Hollywood Farmers’ Market (L.A.’s best) sets up Sundays on Ivar Avenue between Hollywood and Sunset. It’s a scene that draws vibrant mix (including celebrities), so get there early, when there are still some unoccupied plastic tables by Delmy’s Pupusas, the stall you should definitely visit for breakfast. After polishing off a pair, grab a watermelon juice from the jugo vendor next door and start shopping for souvenirs: candy-like dates from Bautista’s, radiant citrus, spiced pistachios, more varieties of avocado than you knew existed… It’s an orgy of fresh local food that will make every winter-hardened Northeasterner die a little inside. Note: If you’re leery about packing your carry-on full of tangelos, there’s a strong contingent of artisans here, as well, selling woven moccasins, tintype portraits, on-demand typewriter poems, and other nonperishable take-homes.

More Than Toast at Sqirl 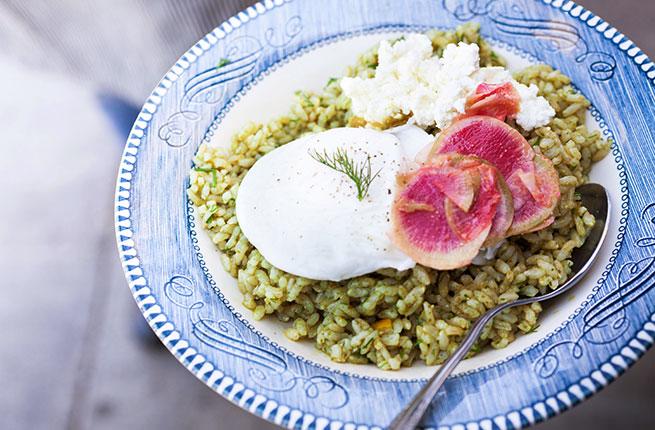 Jessica Koslow’s Sqirl (average main $9), the microchip-size café/cultural juggernaut in Silver Lake, is famous for toast. In fact, the proper name for the thick-cut brioche slathered with ricotta and house-made jam is “Famed Ricotta Toast.” And it’s great (as is Sqirl’s equally well-known avocado toast), but if you buy the hype and bypass the rest of the curious, nourishing, tantalizing things on the menu, you’ll be missing out. So come here hungry, early, and with a group and be ready to fawn over poached eggs with gingery tomato-braised chickpeas, carrot sopes piled with duck mole, and kabocha squash socca pancakes. Wondering why the rice in the savory rice bowl and sweet porridge is so flavorful? Hint: It’s not just the sorrel pesto and lacto-fermented hot sauce. Sqirl uses Koda Farms’ Kukuho Rose, a proprietary heirloom developed in the 1950s, just one example of the excellent products Koslow uses to elevate L.A.’s morning and afternoon meals.