What It’s Like to Visit Northern Alaska in Winter

By Rosamund Lupton, author of The Quality of Silence 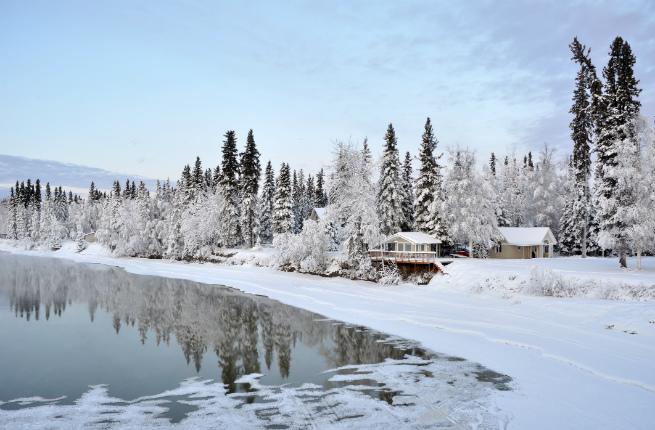 Northern Alaska is a land where the sun shines at midnight in summer and, in winter, a night of darkness lasts two months; where the temperature can plummet to –80 Fahrenheit, with winds screaming across the tundra; where animals’ fur and birds’ feathers turn white to match the land and sky. The Arctic has exerted its pull on explorers, writers, and prospectors for centuries and it was the setting for my novel. For months I’d wanted to go there.

It had seemed reasonably simple in England. I would fly to Fairbanks and, from there, get a flight to Coldfoot in the far north. It was March, so there was some daylight, although it would be punishingly cold. The first part went to plan, but a storm blew in to Coldfoot and all flights were grounded. The forecast was set to get worse. Looking on the bright side, it was an uncannily similar scenario to the beginning of my novel, when a woman tries to go north to find her husband. I phoned taxi company after taxi company but no one would take me. Finally, and increasingly desperate, I bribed a driver who had a van to take me as far north as possible.

Like all the vehicles I’d seen in Alaska, the van had a wire coming out of the grille to plug into an electrical outlet to prevent the engine from freezing, but that was the only reassuring feature. It wasn’t a four-wheel drive and from the looks of it, didn’t even have winter tires. As we drove out of Fairbanks, Charlie, the driver, cheerfully pointed out the graveyard and the aboveground storage shed where dead bodies lay until the earth thawed enough for burial.

The road was snow-covered and icy, the gritting lorries hadn’t been out, and it had no lights or markings. The tracks through the snow on our side of the road were deep, as trucks had hauled their heavy cargos north. On the opposite side of the road, the tracks were far shallower. We passed abandoned gold-panning equipment, just left in the snow. After half an hour, we saw a cluster of about 30 mailboxes, looking like a hastily assembled dovecote. Charlie explained that the postal service ended at this point, so all cabin owners and homesteaders would come to collect their mail. The electricity also stopped here. Anyone further north lived off the grid. We drove on.

Snow-covered trees stretched as far as the eye could see in a boreal forest, part of the largest ecosystem in the world. Farther north, trees stop growing and the land becomes vast tundra. A moose moved silently in the forest to the side of the road, a fleeting shadow through the trees. It was like going through the wardrobe door into Narnia—but it was a Narnia with a huge metal pipe running through it. Gleamingly metallic, the Trans-Alaska Pipeline was never far from view. I wanted to get out of the van and away from the road and pipeline, but the snow was getting heavier and the light was failing. We continued driving, and the temperature continued falling. Charlie told me that the temperature often dropped to –50.

On the side of the road there were small signs with an arrow pointing left or right to keep you on the road. They popped in the gloom as the road narrowed and became more perilous. A truck thundered towards us, its headlights fuzzy through the darkness and falling snow. Unlike my fictitious character, I had no good reason to risk going further. As Charlie pulled the van off the road, the wheels got stuck in deep snow. It took him two attempts, but he managed to get chains on the tires.

I was relieved when I saw the orange glow of Fairbanks, but also disappointed: I felt I had not fully seen the beauty of northern Alaska. So the next day, I returned to the dovecote cluster of mailboxes and went along one of the trails to a place that offered the opportunity to go mushing. There was a simple cabin with a generator that made enough electricity for a light, but nothing else, and 15 kennels of excited huskies. I went out on a sledge pulled by eight huskies through falling snowflakes. There was no road or pipeline or trucks here. The only sound was that of the dogs’ breathing and the sledge bumping over the frozen ground. The huskies are now in training for the great 100-mile-long Iditarod race across the wilds of Alaska, while I am back in England remembering travelling by through a boreal forest on virgin unmarked snow in a vast, ethereal, timeless land.

Rosamund Lupton is the internationally bestselling and critically acclaimed author of the novels Sister and Afterwards. Her New York Times bestselling debut, Sister, was a New York Times Editor’s Choice and Target Book Club pick, and has been translated into more than thirty languages with international sales of more than 1.5 million copies. Lupton lives in London with her husband and two sons.