Prince Edward Island is Canada’s smallest province and also one of the most beautiful. Upon arrival, the fresh sea air and red sandy beaches welcome you to this peaceful and laid back island. Every year tourists and fans flock to PEI from around the world in search of Anne of Green Gables – a fictional character from the children’s novel written by talented local author Lucy Maud Montgomery. This story of an imaginative red-haired and spunky orphan with braids searching for belonging after mistakenly being sent to live with older siblings has won hearts since it was first published in 1908. The charming stories of Anne have been translated into dozens of languages with over 50 million copies sold. Over three million people have been mesmerized by the musical based on the book, and there was a hugely popular mini-series in 1985 of the same name. This lead to the television series Road To Avonlea, one of Canada’s most-watched series of all time. When you visit PEI and follow in Anne’s footprints, you will see why her funky and optimistic spirit has forever immortalized her in hearts around the world.

INSIDER TIPAnne of Green Gables activities at Prince Edward Island are seasonal, and most of these attractions are open from May/June to September. Before you visit, catch up with all things “Anne” on Netflix–the first season of CBC’s brand new series is now streaming for a new generation of fans.

Go Back in Time at Mrs. Lynde’s Dress Up Shoppe

Begin your exciting Anne-themed tour with a stroll through Avonlea Village in Cavendish. This fully recreated village is just like the one Anne grew up in. Pop in Mrs. Lynde’s Dress Up Shoppe to try on old-fashioned clothing to match those of 1908, when the novel was first published. Sit in a realistic carriage wearing your authentic dresses, hats, and blazers and smile for photos to laugh at later.

Check out a 19th Century Schoolhouse

Continue in Avonlea Village and stop by the local Church like the one Anne attended in the novel. While the last thing kids on vacation might want to think about is school, don’t let that stop you from checking out the old 19th-century schoolhouse. Sit behind the wooden desks to get in the spirit of learning just like Anne and her classmates used to do. 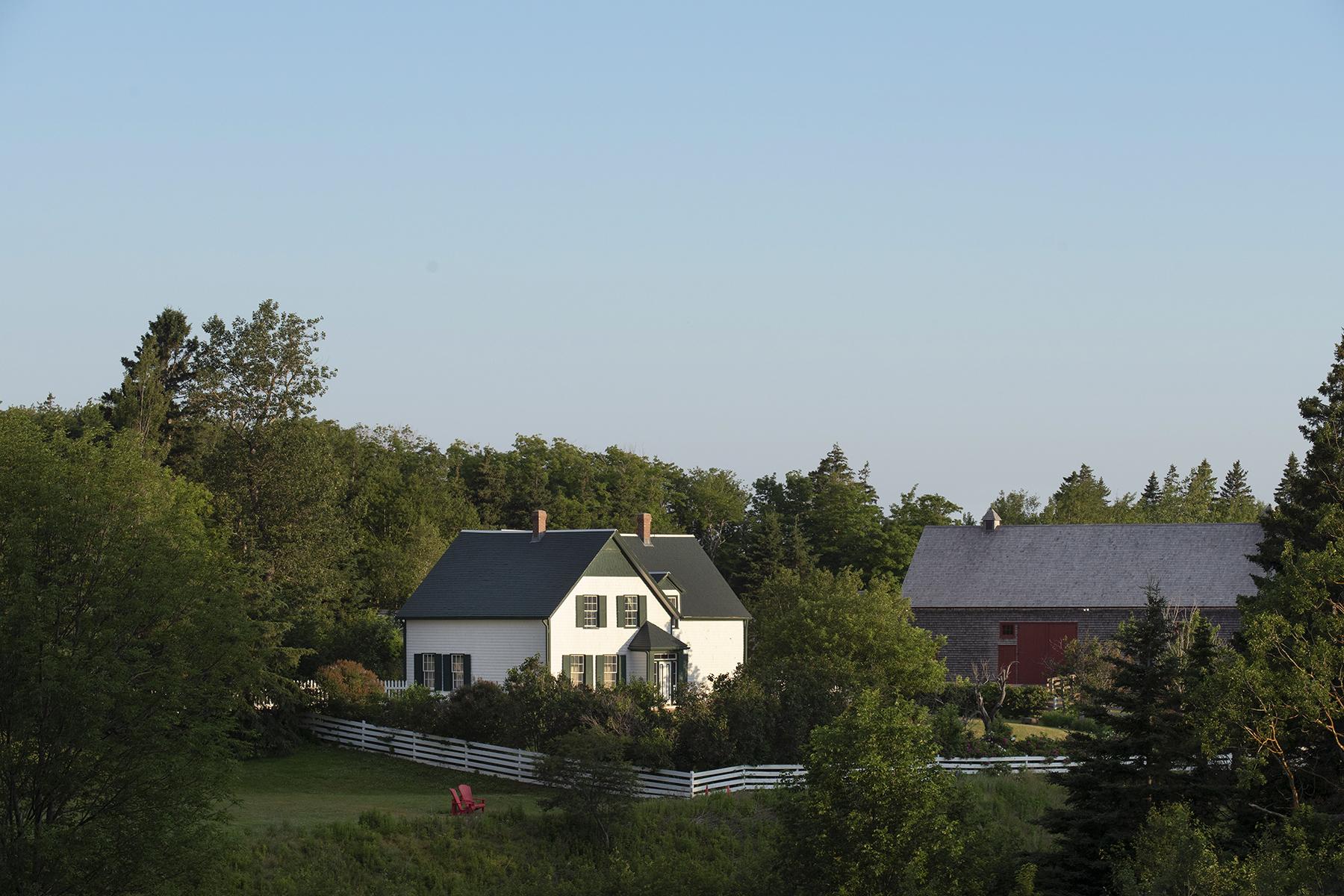 This famous landmark from the novel can be found on the grounds of Green Gables Heritage Place in Cavendish, inside Prince Edward Island National Park along the north shore. Sandy beaches and farmland greet you upon entry, and time seems to stand still. Start the journey by visiting Anne’s home and walk through the kitchen, living room, and her bedroom, complete with appropriate décor of the times. 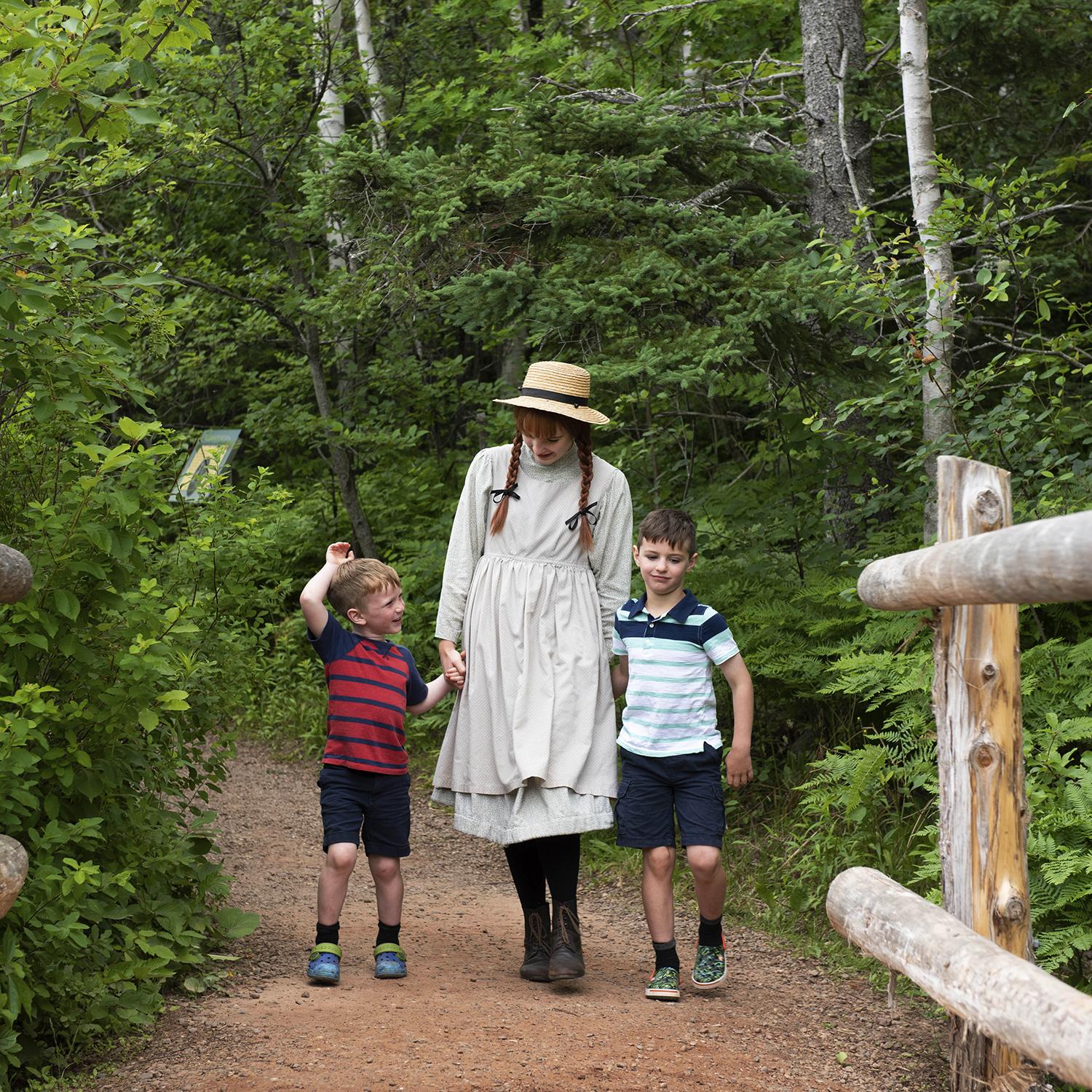 Walk Through the Haunted Woods

Walk in the footsteps of Anne and her friends in the “Haunted Woods” at Green Gables. The woods are located along the path behind the historical landmarks, and you can also check out the famous “Lovers Lane” and Balsam Hollow trails–appropriate for all ages that want a glimpse behind the scenes of the novel. There are opportunities in the summer at Green Gables Heritage Place to join up with organized interpretive programs that include storytelling, singing, and playing some good old-fashioned games like potato sack races–guaranteed to bring laughter to visitors of all ages. 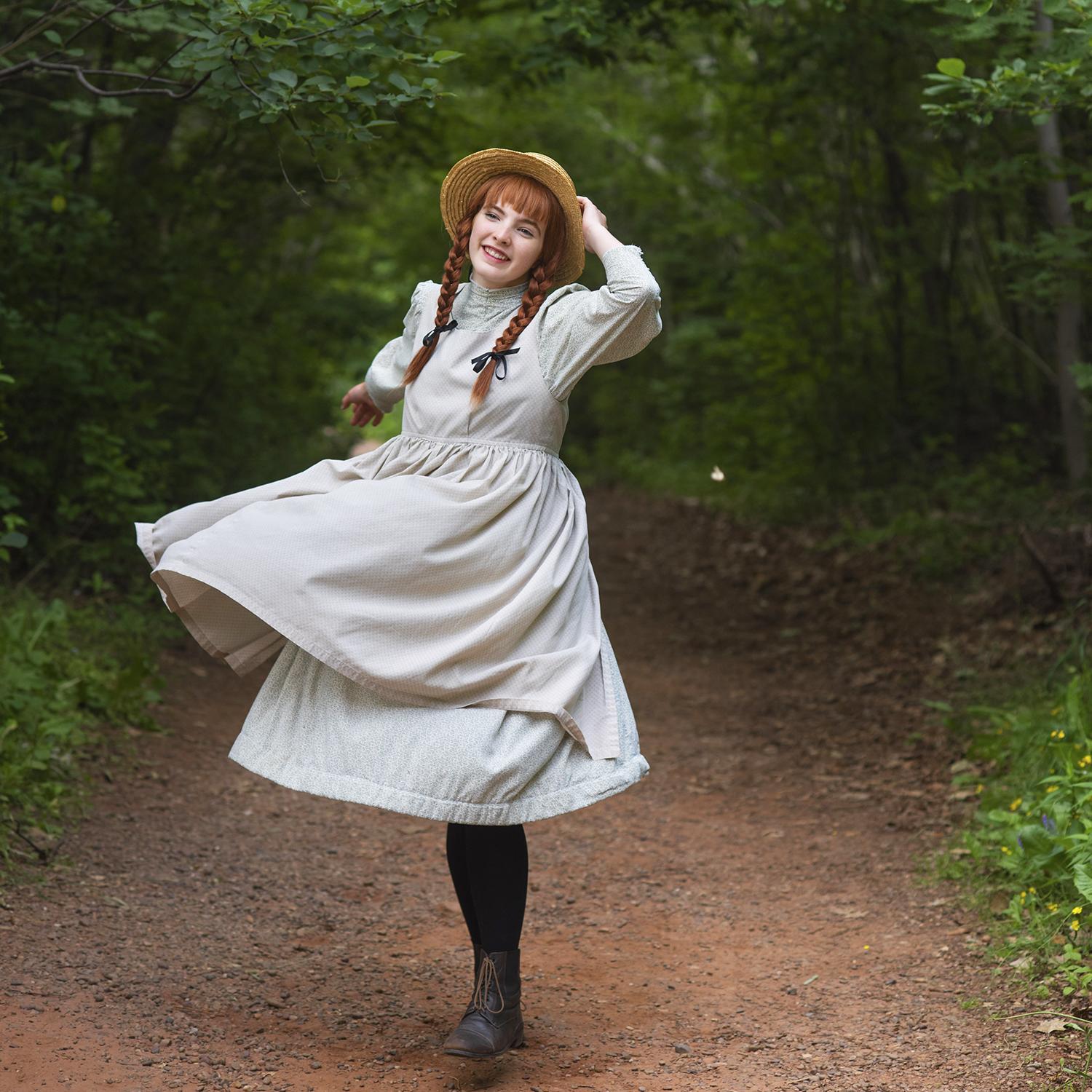 That’s right, get the kids and cameras ready for an experience they won’t soon forget. The famous Anne Shirley complete with long red braids and spunky personality is at Green Gables. Anne will gladly smile for photos and stay in character if you want to ask her questions about what it’s like to be the world’s most famous lovable red-haired orphan. 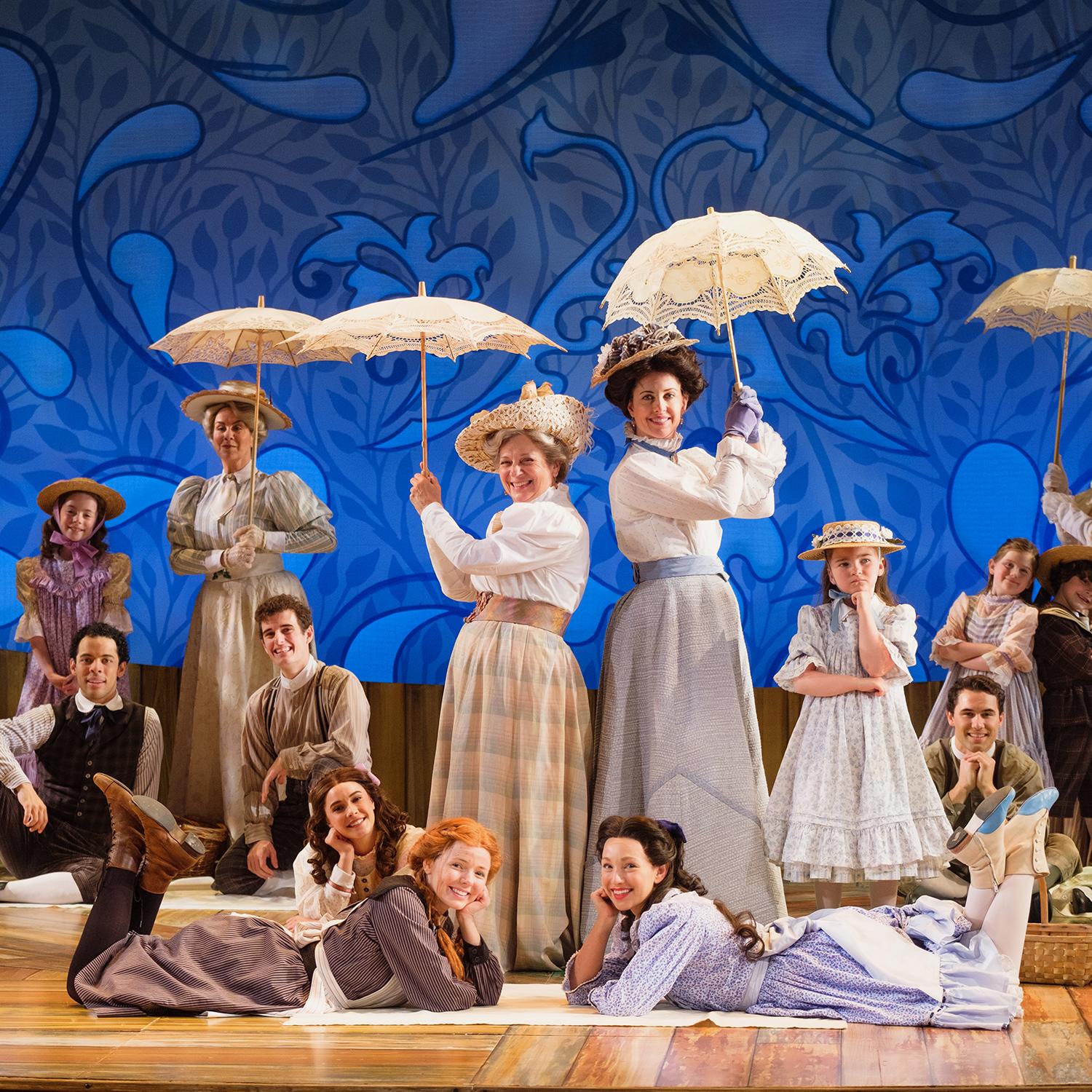 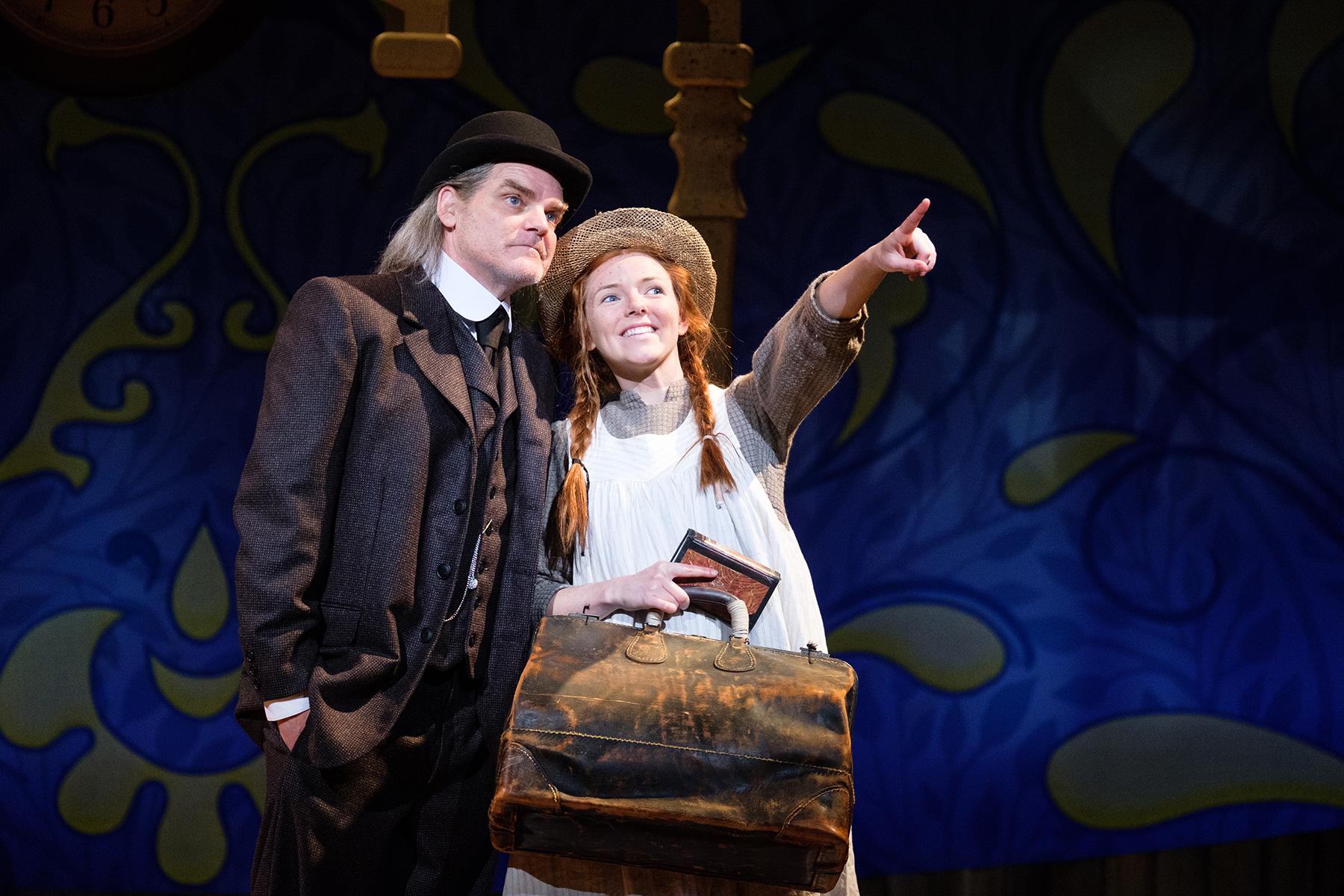 PHOTO: Louise Vessey.
Previous Next
7 OF 12

The Confederation Centre of the Arts in Charlottetown is home to the famous Anne of Green Gables musical. Over the summer months you can sing along with the talented cast that are part of the longest running musical in the entire world. This Guinness Record setting Canadian classic is based on the original novel and is sure to make your heart melt from the moment Anne saunters onto the stage in adorable red braids and with spunky spirit. To ensure you get tickets, purchase them at least two weeks prior. 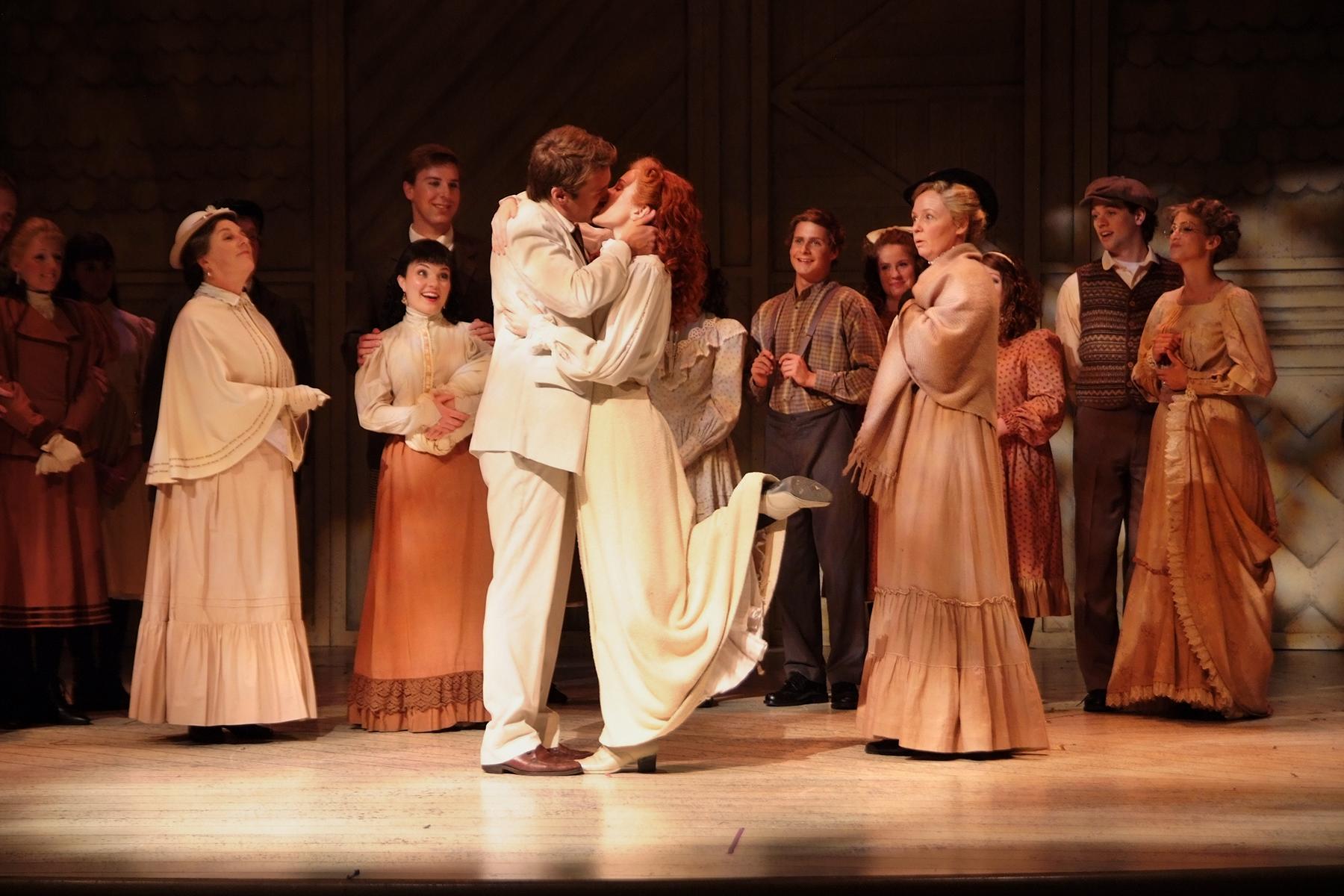 Check out Anne & Gilbert on Stage

Anne & Gilbert the Musical launched in 2005 and became an instant hit. The award-winning songs tell the story of Anne and Gilbert’s famous Canadian love story once Anne is older and about to start her first job as a teacher. The message of love, friendship, and hope is perfect for families (kids must be age four and older) and based on the novels Anne of the Island and Anne of Avonlea by L.M. Montgomery.

Learn All About the Author at Her Birthplace

As real as she seems, Anne is a fictional character dreamed up by talented Canadian author L.M. Montgomery. To learn all about her life on the peaceful and picturesque island, visit her birthplace. Walk through the old rooms of her home decorated with period furniture, an organ, replica wedding dress, and numerous accessories. 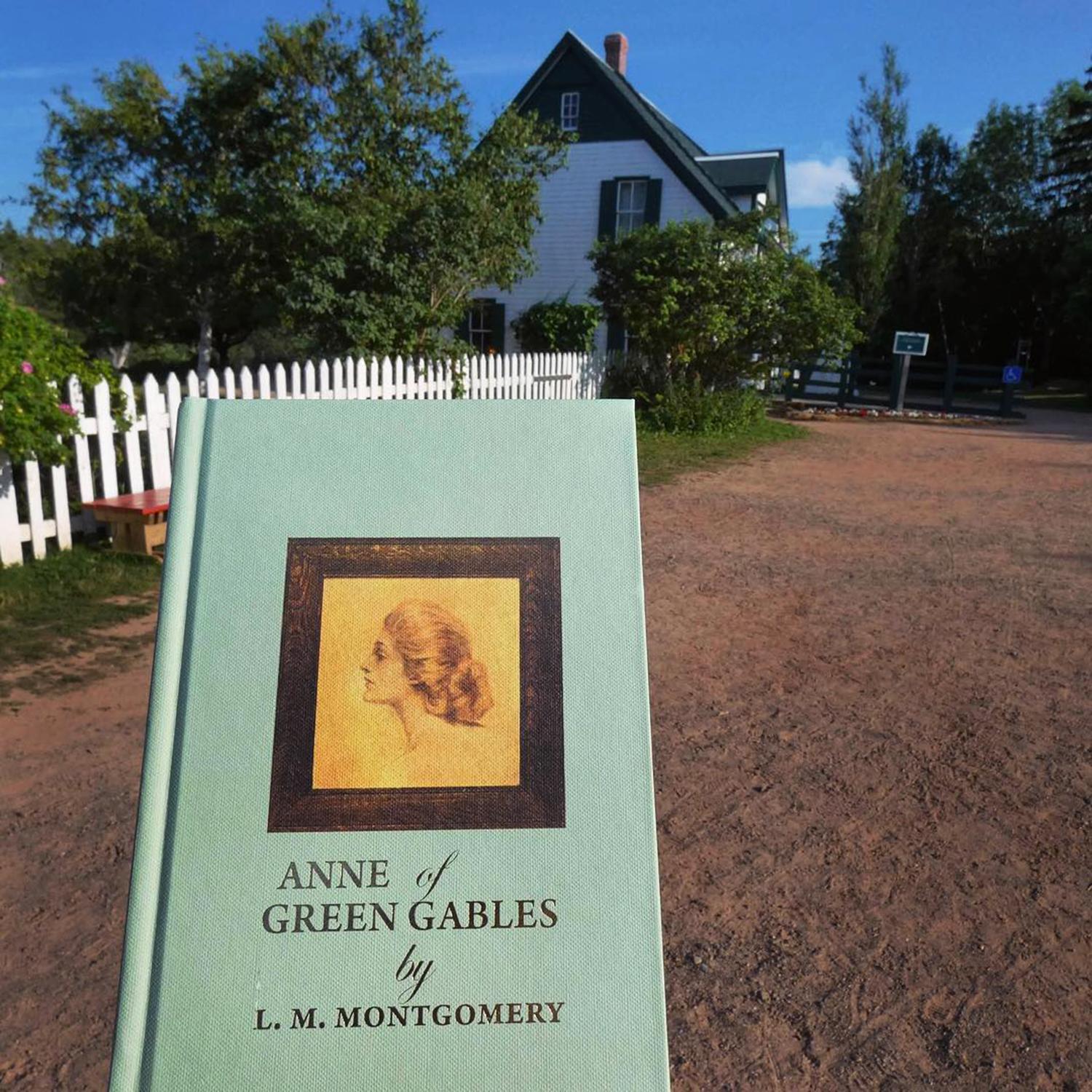 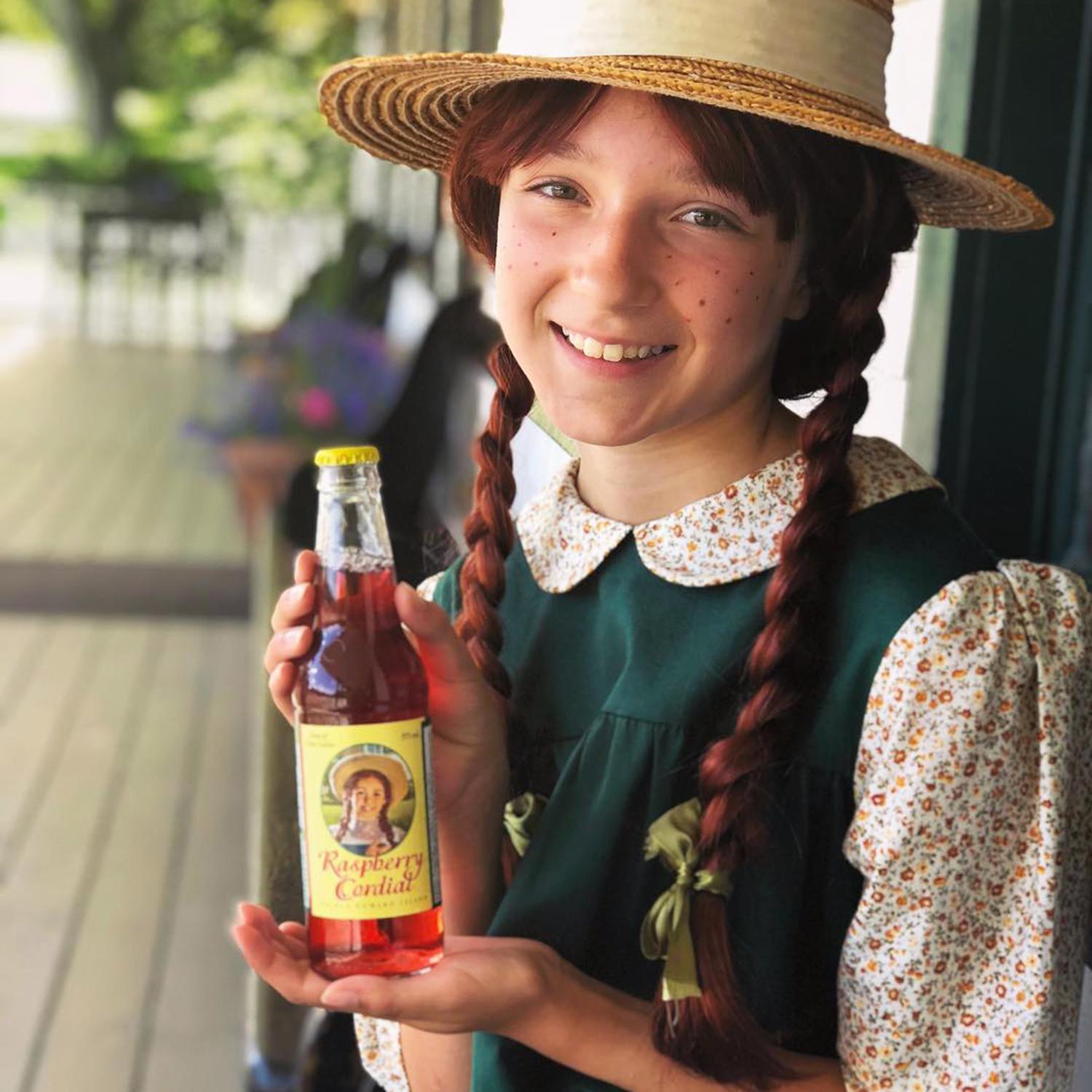 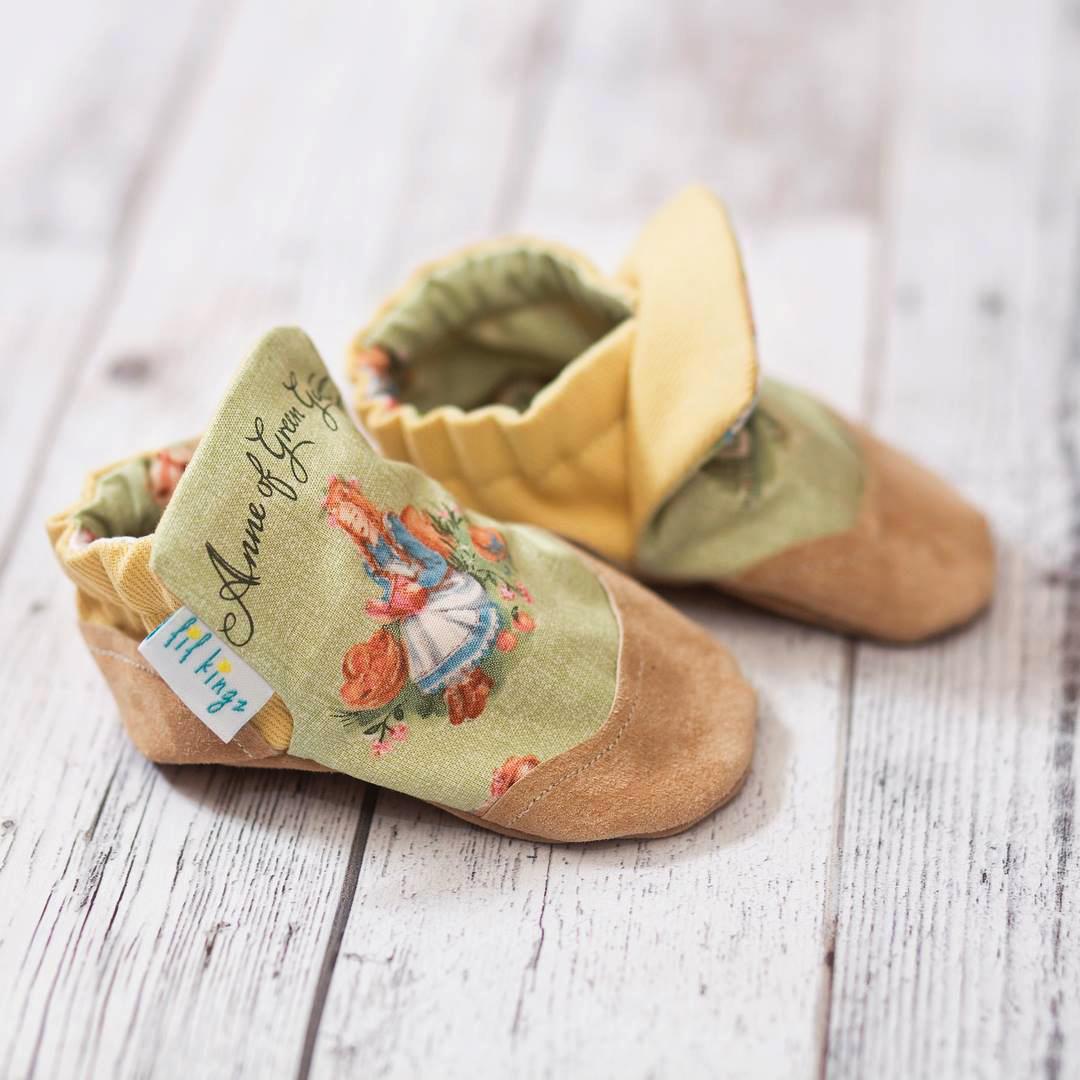 PHOTO: Anne of Green Gables Store
Previous Next
10 OF 12

Leave With at Least One Souvenir

Avonlea Village is also home to the Anne of Green Gables Store in the train station. They sell adorable Anne dolls, Anne themed clothing, books, posters, jewelery, stained glass, plush toys, and so much more. This location in Cavendish reopens early May. If you are in PEI earlier and must have Anne-themed souvenirs, check out their Charlottetown location now open and browse through books and dozens of Anne related treasures.

Head over to this family owned Museum set against 110 acres of blooming flower gardens and a view of the Lake of Shining Waters, straight out of L.M. Montgomery’s story. It’s here at this inspiring setting that Montgomery wrote many of her novels, making the area even more significant. The museum’s artefacts include authentic furniture, linens, dishes, quilts, and a pretty cool old-fashioned stove; all significant items from the Anne of Green Gables series. Montgomery was married on these grounds at the famous Campbell home of her Uncle John and Aunt Annie, built in 1872. 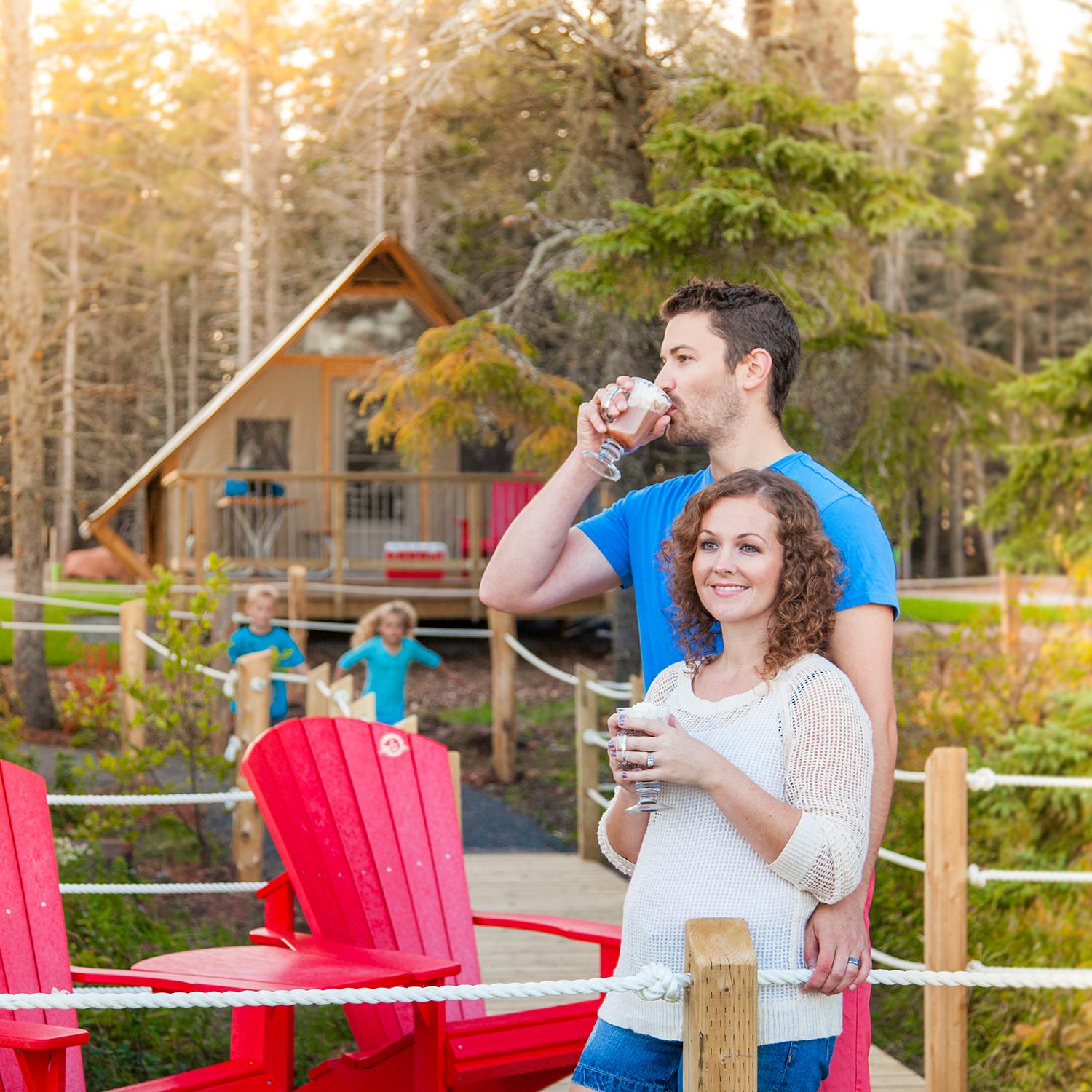 Pack up a Picnic

You can’t end your Anne-themed trip to the island without a summer picnic along Cavendish Beach. Visit the Charlottetown Farmer’s Market and pick up everything you need for lunch including local fruit, veggies and fresh bread. Should you desire, turn your day at the beach into an overnight adventure and sleep in an authentic Parks Canada oTENTik, a cross between a rustic cabin and a tent. Top off your Anne themed trip by reading the original Anne of Green Gables novel under a starry Prince Edward Island sky.