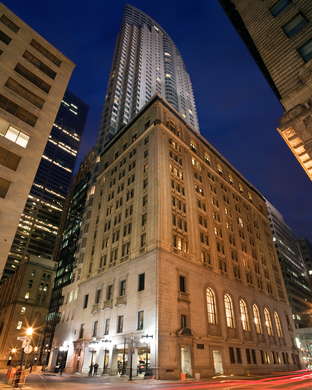 One King has one foot in Old Toronto and one in the modern business world. The hotel's sleek, 51-story tower soars up from the original Dominion Bank of Canada (circa 1912) in the city's downtown business and shopping core. There's a community feeling to this property, which is a mixture of condos, long-term rentals, and hotel rooms frequented by repeat customers. Renovated suites are smart, if a bit drab, and you'll want for nothing--except free Wi-Fi. There's a small fitness center, 24-hour concierge, and a connection to the PATH walkway system.

Request a suite on floor 25 or above in "the sliver"--the tower's nickname--for breathtaking views of either Lake Ontario and the Toronto Islands, or the city's sea of skyscrapers.

It's easy to make yourself at home in the well-appointed suites. They are outfitted with crisp white bedding, washer/dryers, large-screen HDTV, and full kitchenette with fridge, microwave oven and dishwasher. While the decor lacks pizzazz, making too much use of mat chocolate brown finishings, it's dignified. More style shines through in the most expensive rooms.

YOU SHOULD KNOW We aren't wild about having to pay for the internet in a high-end hotel. Only one hour of free Wi-Fi is available in the lobby? That's insulting. 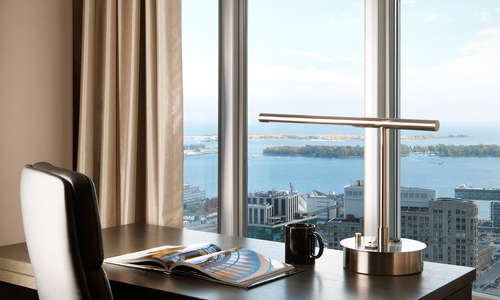 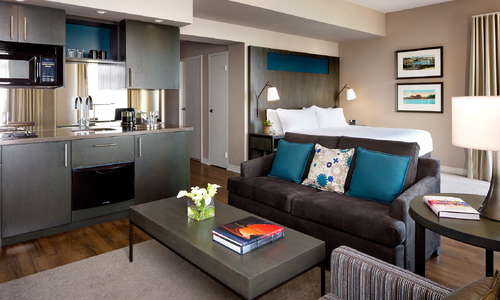 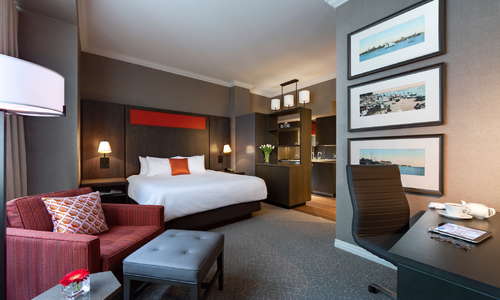 The square sinks are eye-catching, as is the white-on-white wallpaper, and the circular mirrors that glow from behind. Full-sized tubs are appreciated. 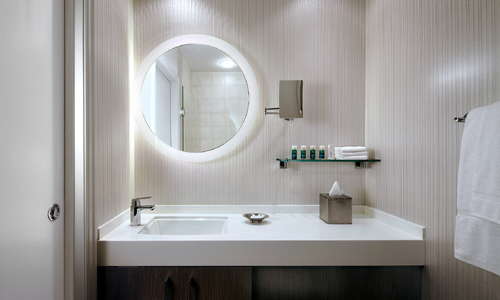 Guests immediately look up at at the chandeliers, coffered ceilings, marble columns, three-story archways and polished brass details. The Beaux-Arts style building and its Renaissance Revival accents are impressive. The reception won't give you a warm fuzzy, but it's grand. The original bank vault from 1914 is still on view. 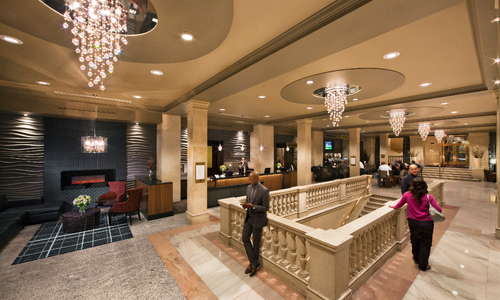 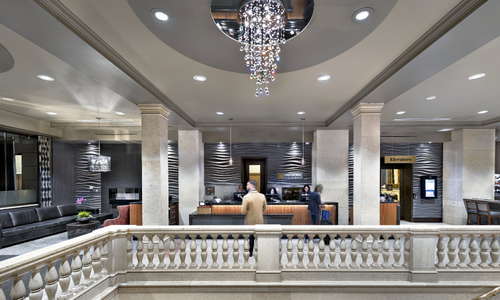 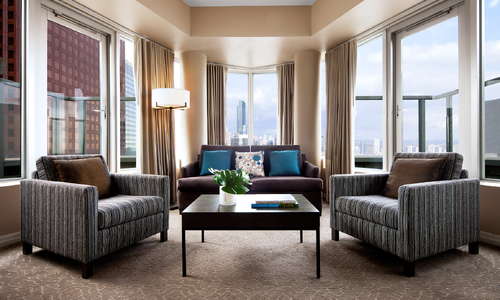 What a view from the treadmill! Hello, rooftop fitness centre! The hotel recently renovated their gym, keeping the focus outwards--out the floor-to-ceiling windows. While quite small, there are a handfull of treadmills, stationary bikes & elliptical machines, each with their own TVs. Note the new free weights and yoga mats. The men’s and ladies sauna got a makeover, as did the whirlpool.

Lodged in the old banking hall, Teller's Bar and Lounge incorporates--you guessed it--the original teller wickets into the design. The atmosphere is so-so, but the breakfast (both buffet and menu items) is spectacular. For dinner, guests rave about the Jerk chicken taco, the One King Cobb Salad and the Blackened Spice Salmon. The late night menu is available until 11 p.m. Also attached to the hotel is Cafe Plenty--a daytime eatery with gleaming white subway tiles, fresh-based treats and delicious sandwiches.

YOU SHOULD KNOW The decor was updated recently, but they played it too safe. All those washed out tones are dreary. Nothing pops. 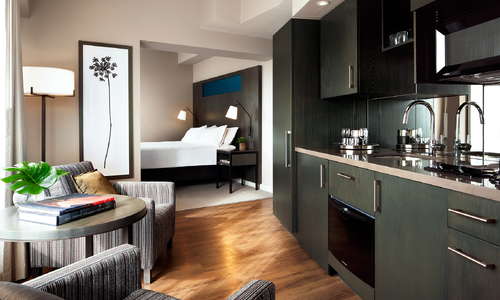 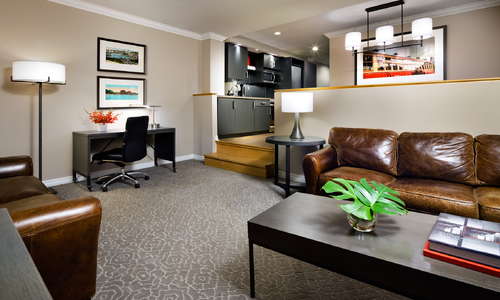 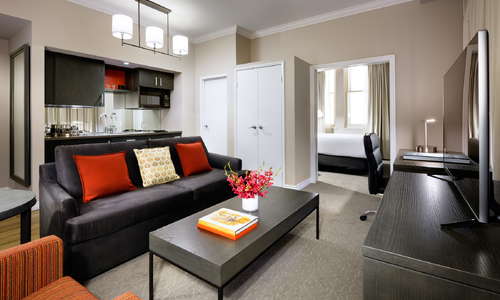 Teller's has a well-stocked bar, serving artisan cocktails and reliable classics. Get a vodka drink called the Salted Caramel Apple. There are seven or eight stools along the actual bar, but there are other sitting areas scattered around the area where you can enjoy your libation. 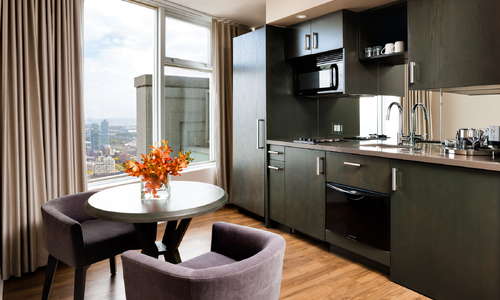 Valet parking ($49 per night) is limited and chancy. There are self-park options available on Wellington Street, located within walking distance. The good news is the hotel has three car charging stations: two Tesla Connectors (80A) and one universal charger (40A). The hotel has optimal access to the downtown core by way of PATH. PATH is a 29 kilometer network of constructed tunnels directly beneath the office towers throughout Downtown Toronto, and the nearby King subway station.

Earl's Kitchen and Bar (7-minute walk) has gourmet burgers, sleek decor and a young vibe for dinner, while Nami (5-minute walk) serves some of the best Japanese food in the city.

Speakeasy 21 (4-minute walk) is a fun place to enjoy live music and craft cocktails in a Prohibition-themed setting. Just round the corner, Beerbistro (1-minute walk) is an ale palace with high ceilings and an endless menu of bottles, draft and cocktails. Even the food menu is heavily beer themed.

This historic hotel captures the moment when Toronto transformed from a podunk frontier outpost into a thriving colonial capital. It's all in the marble and the two-story bank vault. We love the lobby's architectural splendour and the restored Dominion Bank Building (b. 1914), along with the modern sophistication of a high-rise hotel built on top. Suites are roomy and kitted out with everything you'd need for a long-term stay. While the decor is too brown in some rooms, you can't argue with the stunning south views of Lake Ontario. 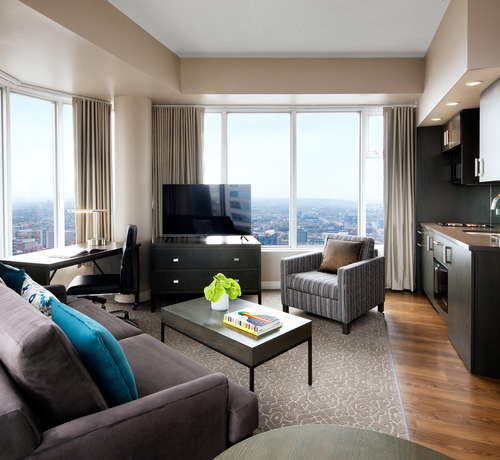 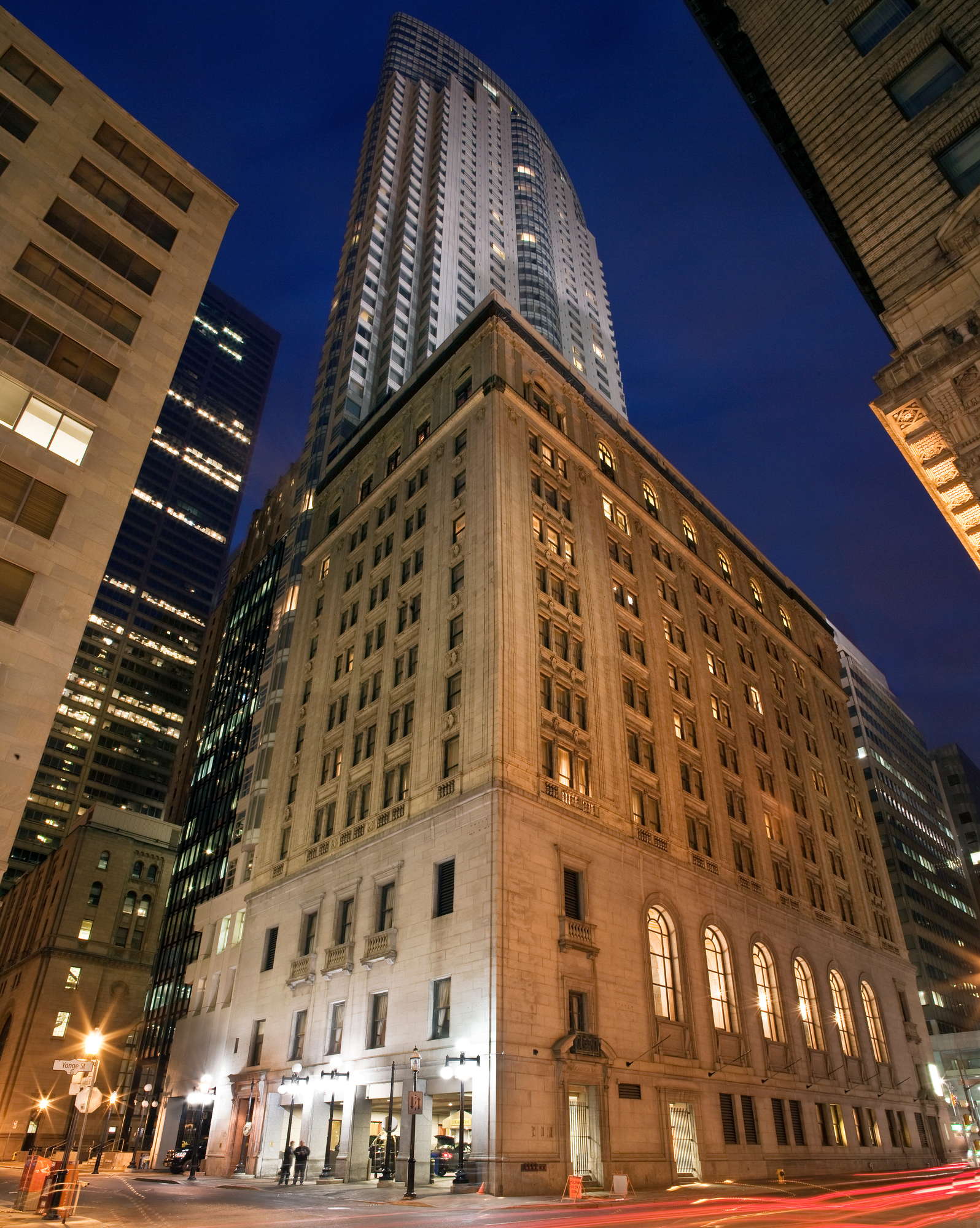 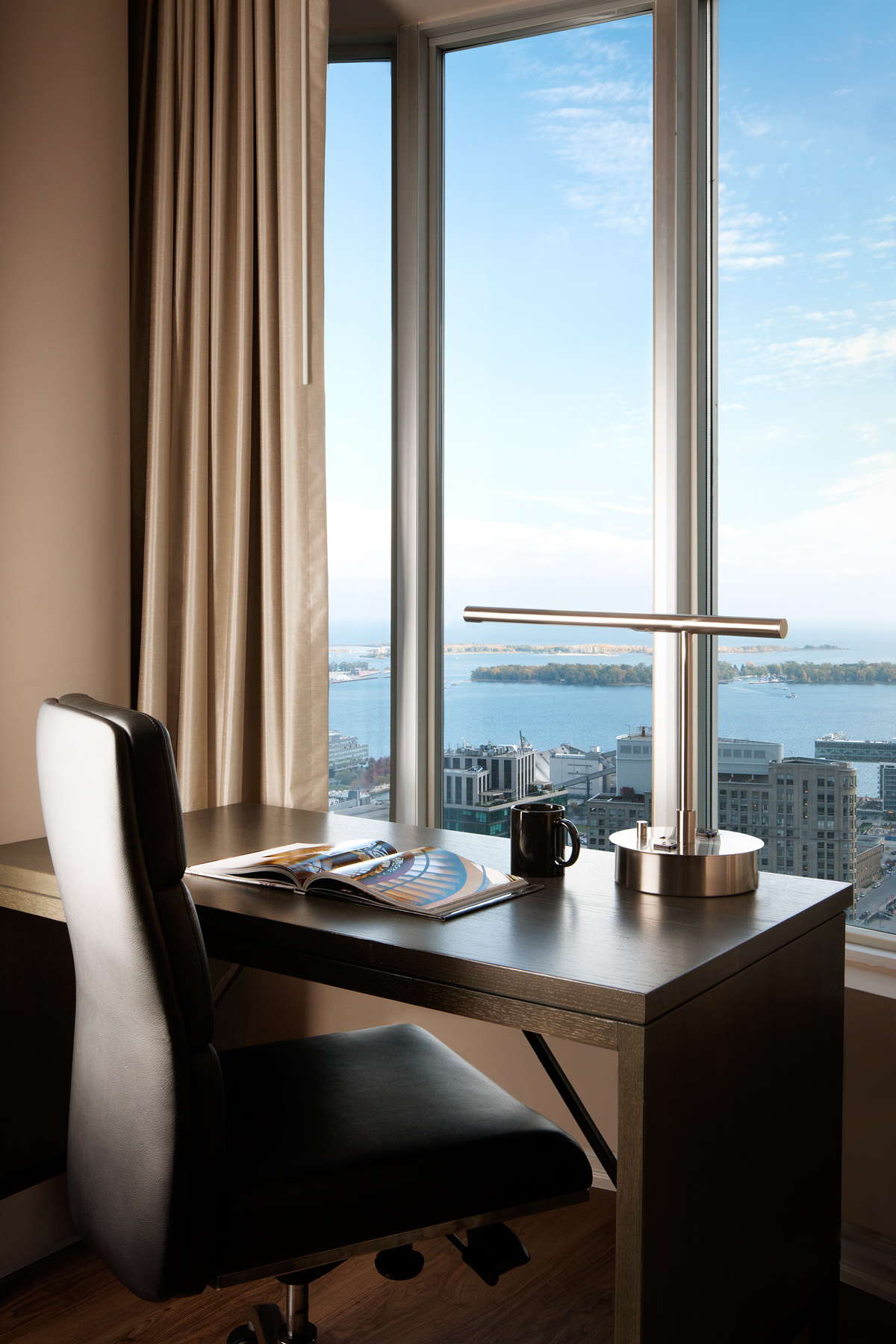 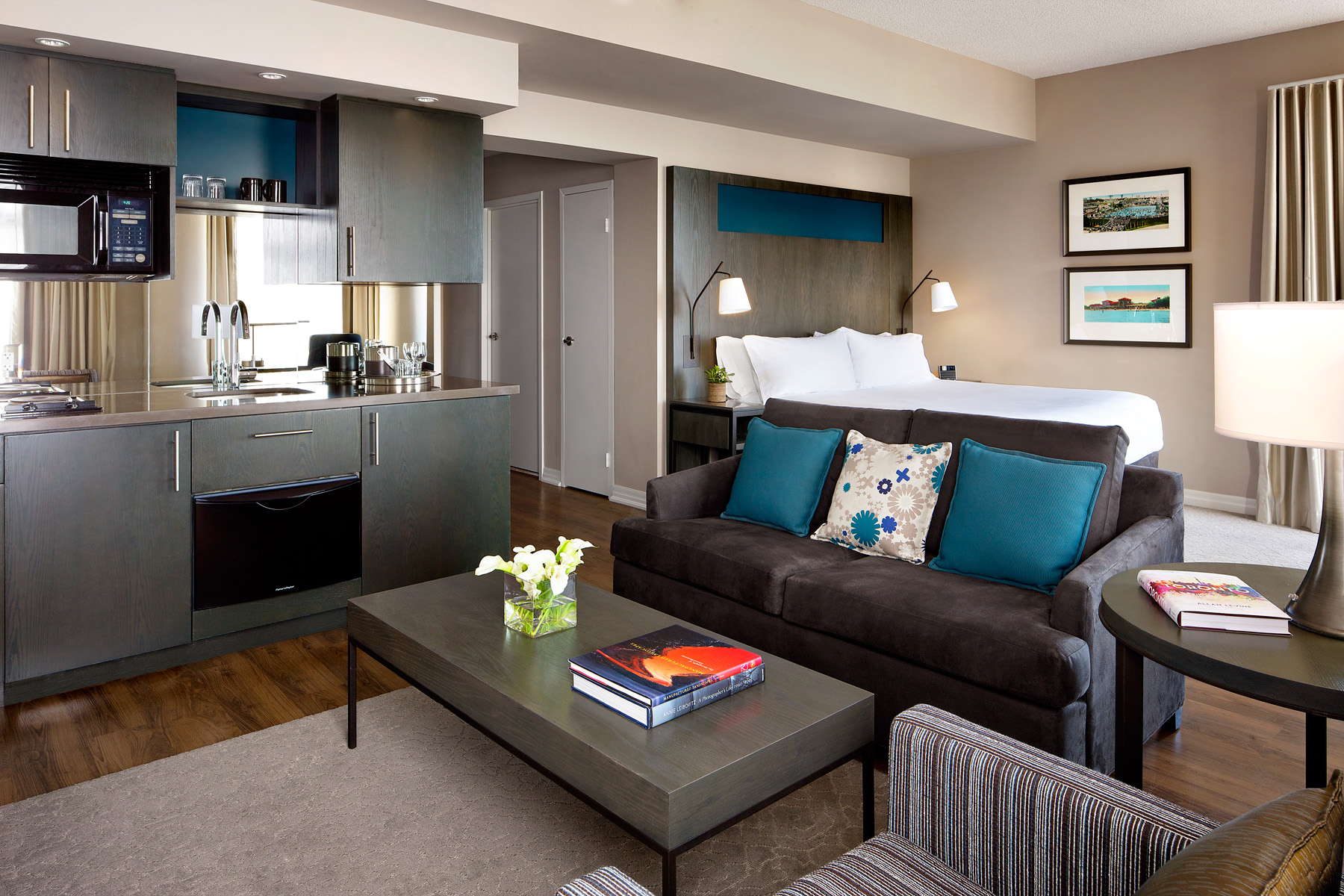 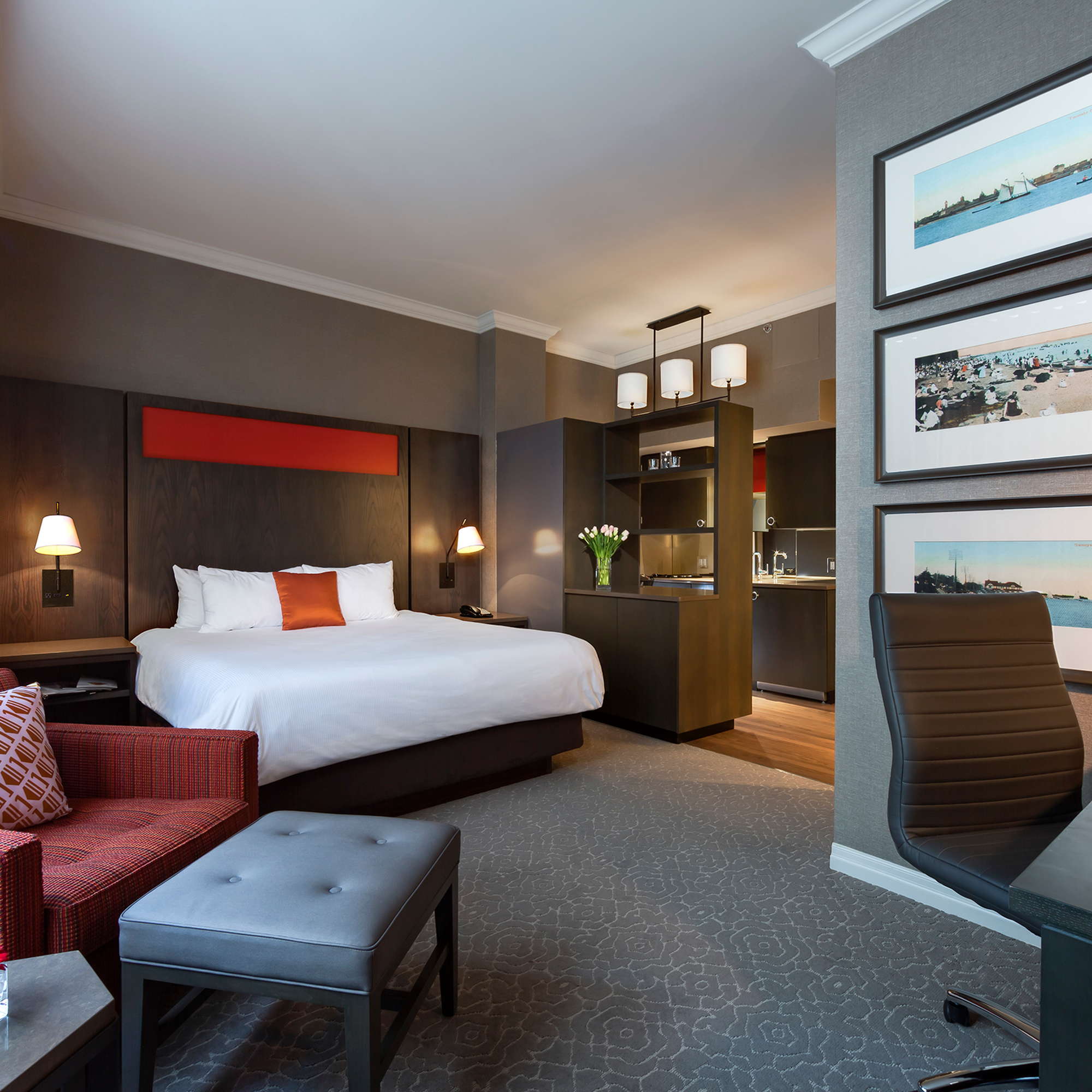 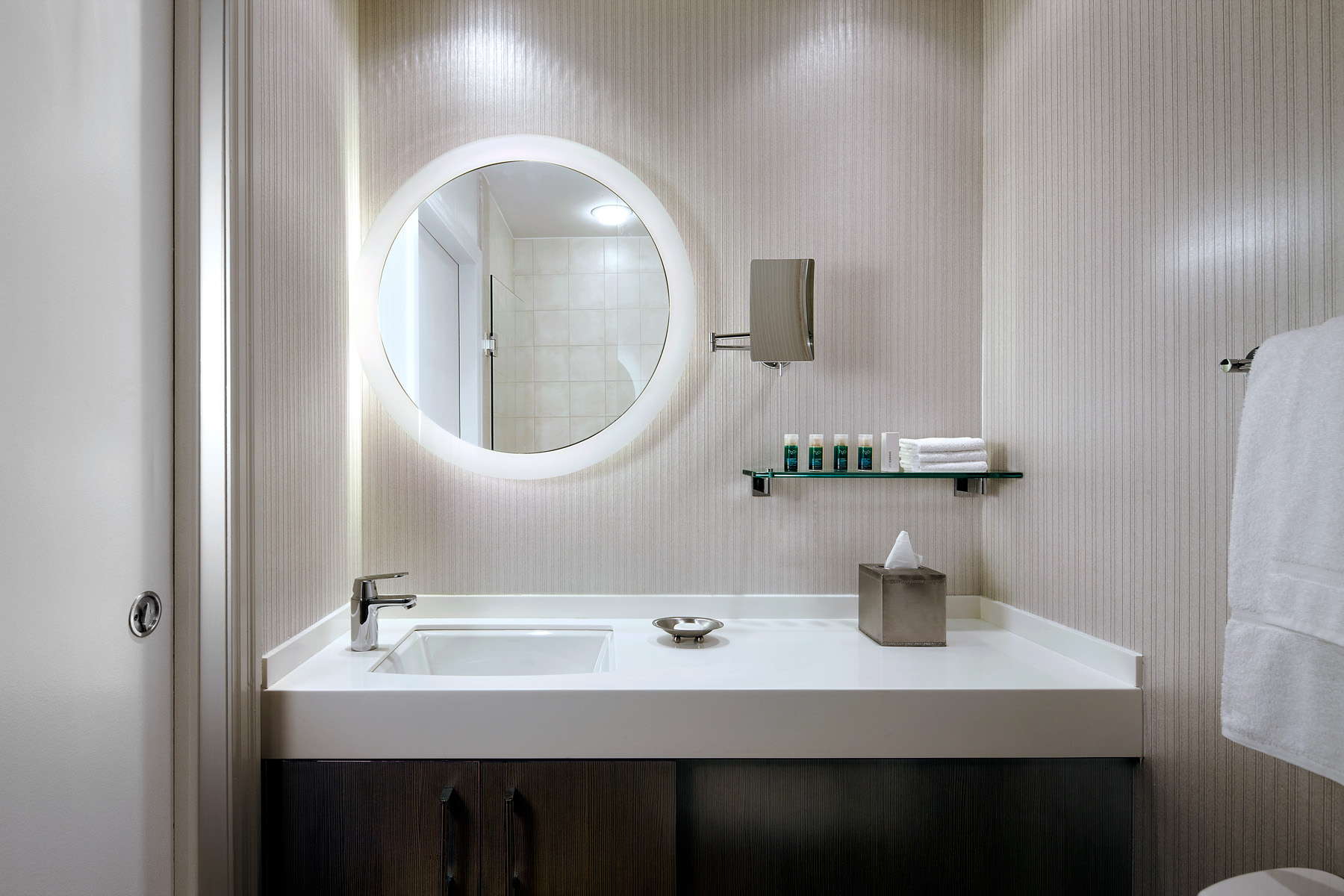 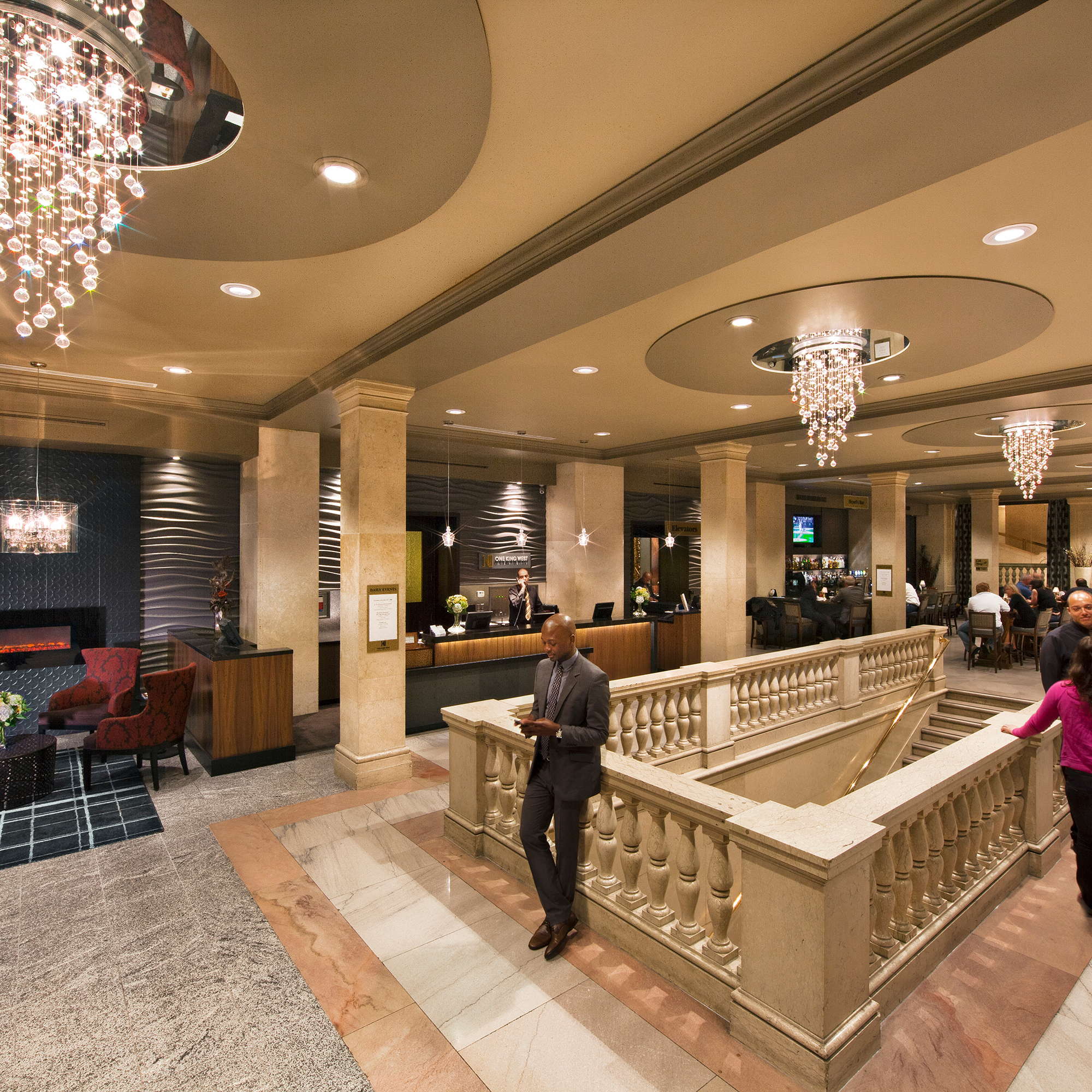 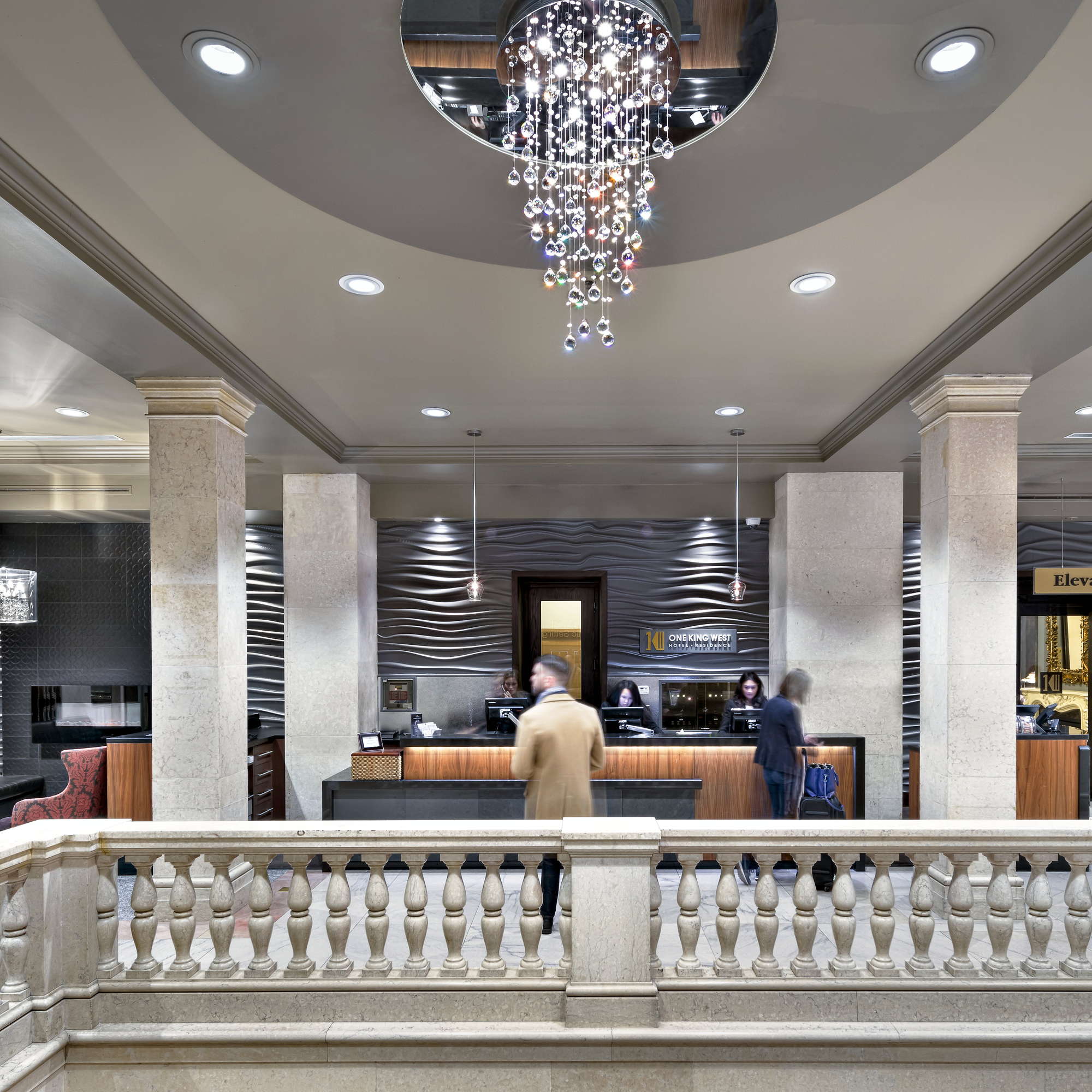 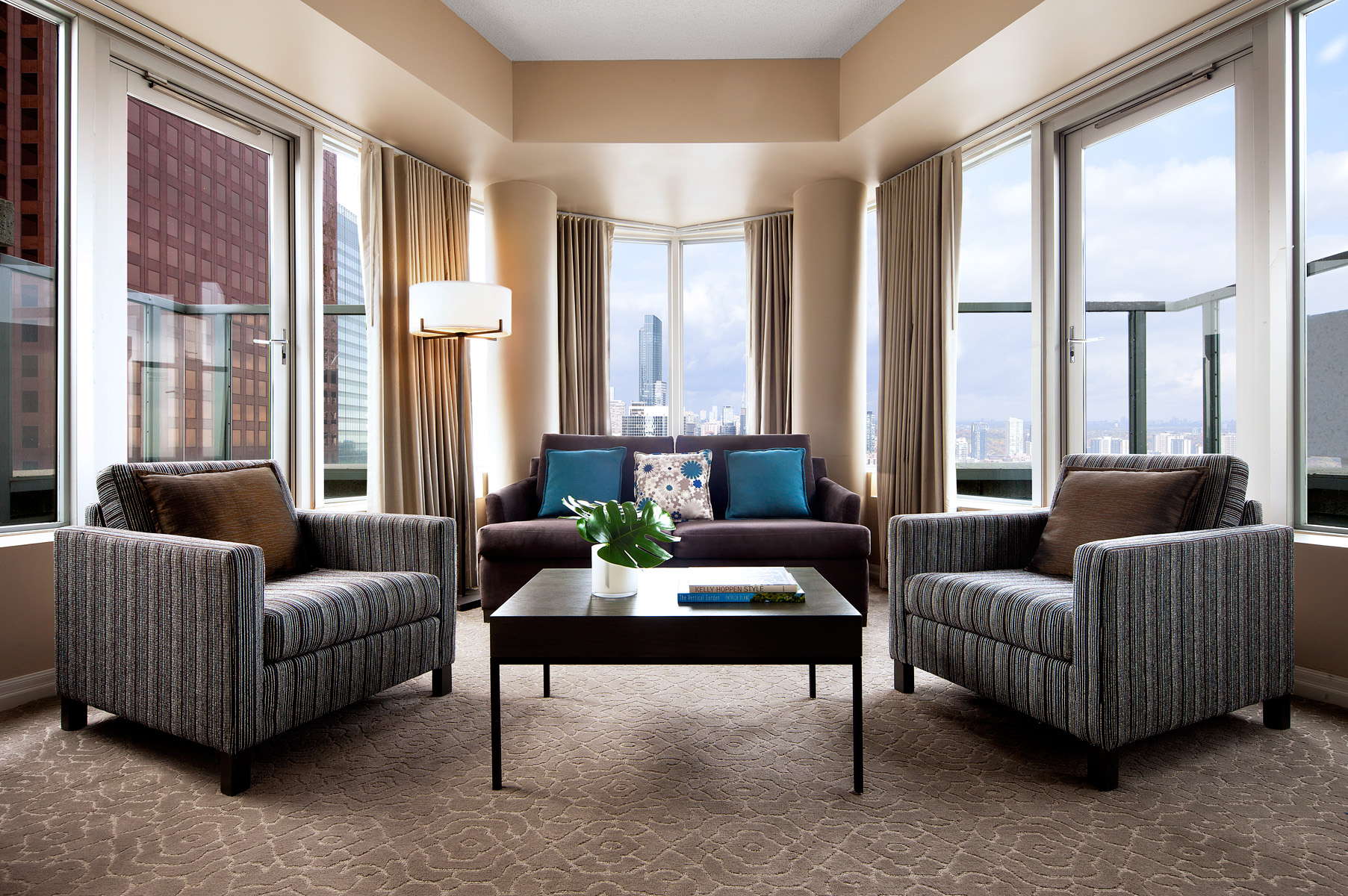 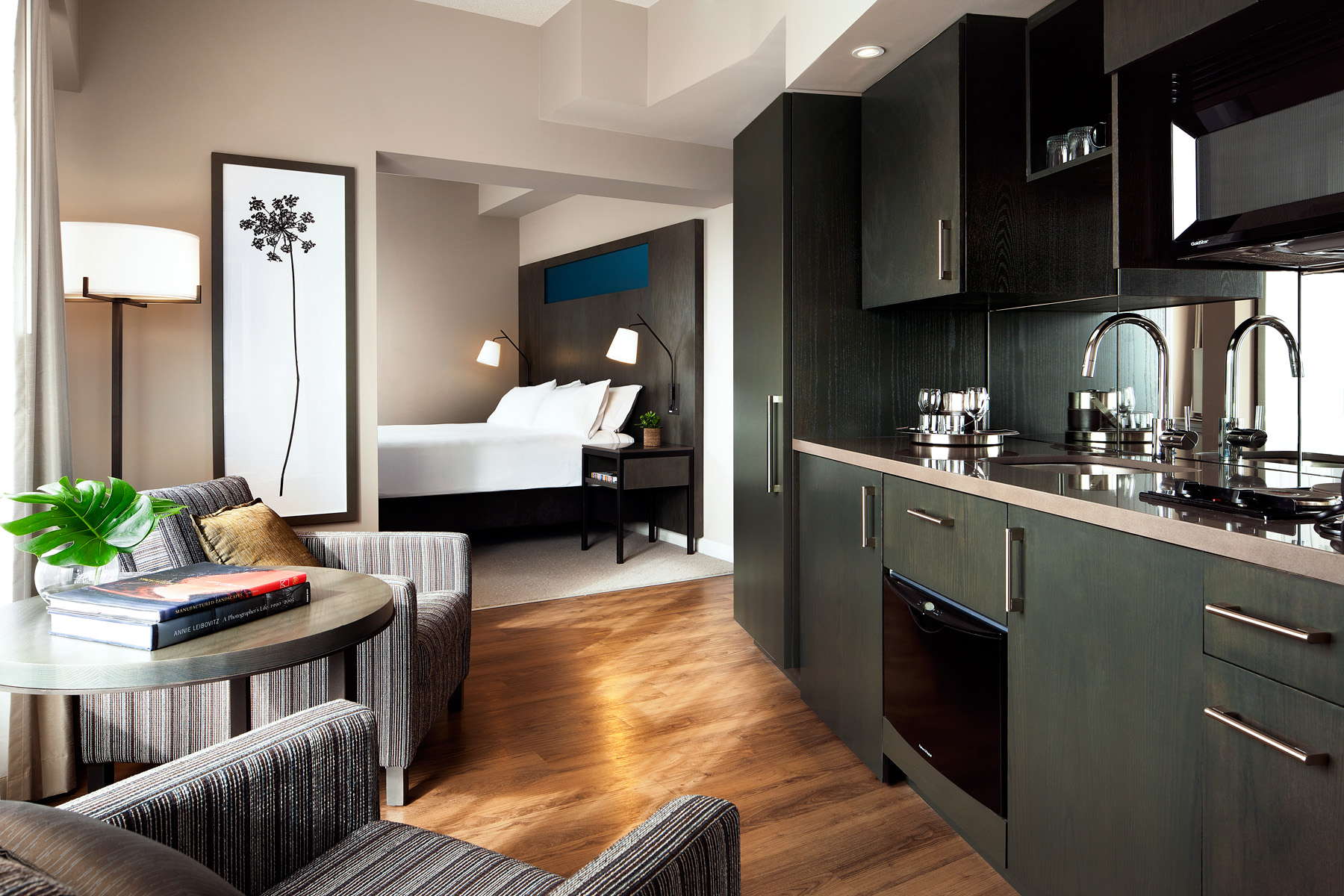 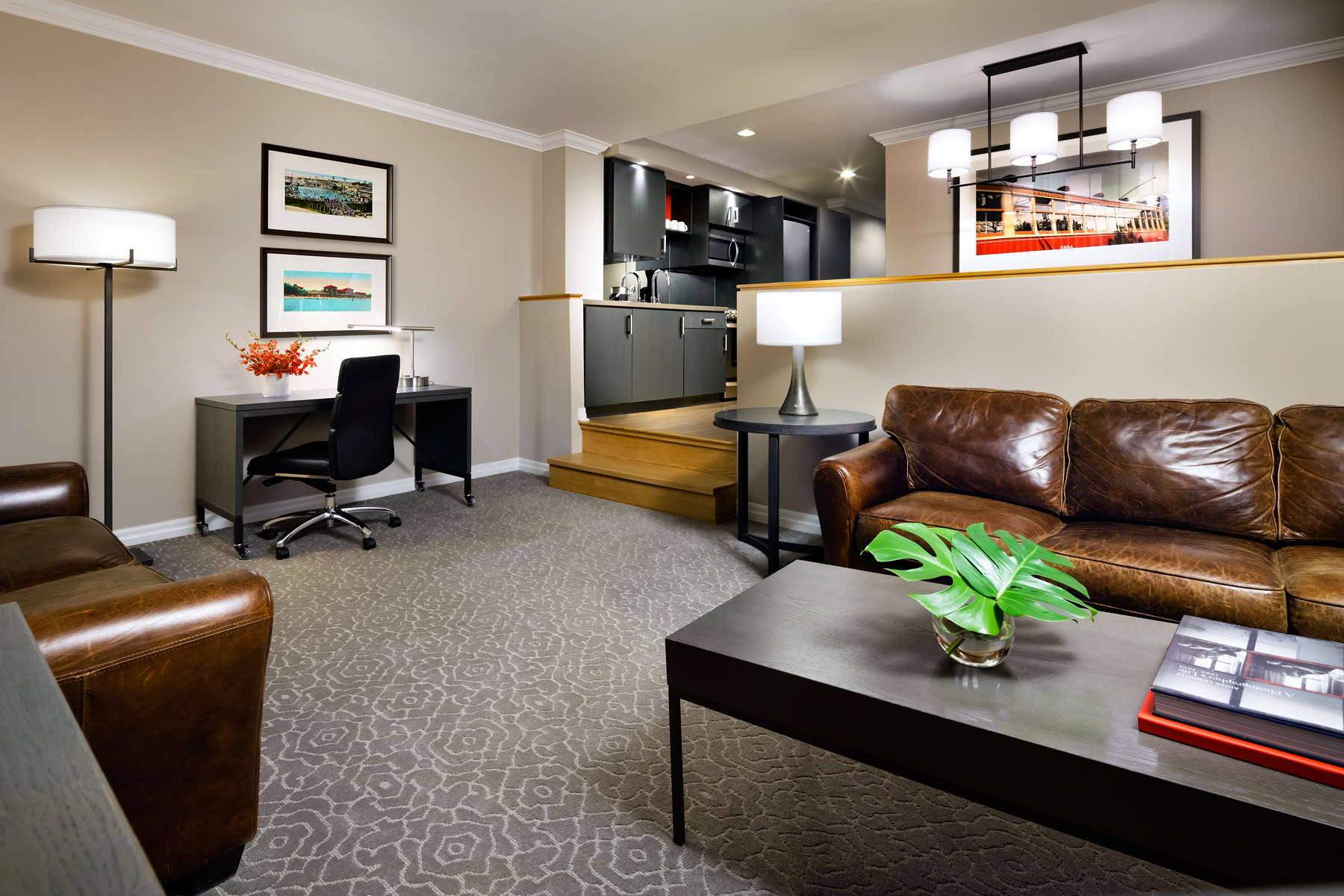 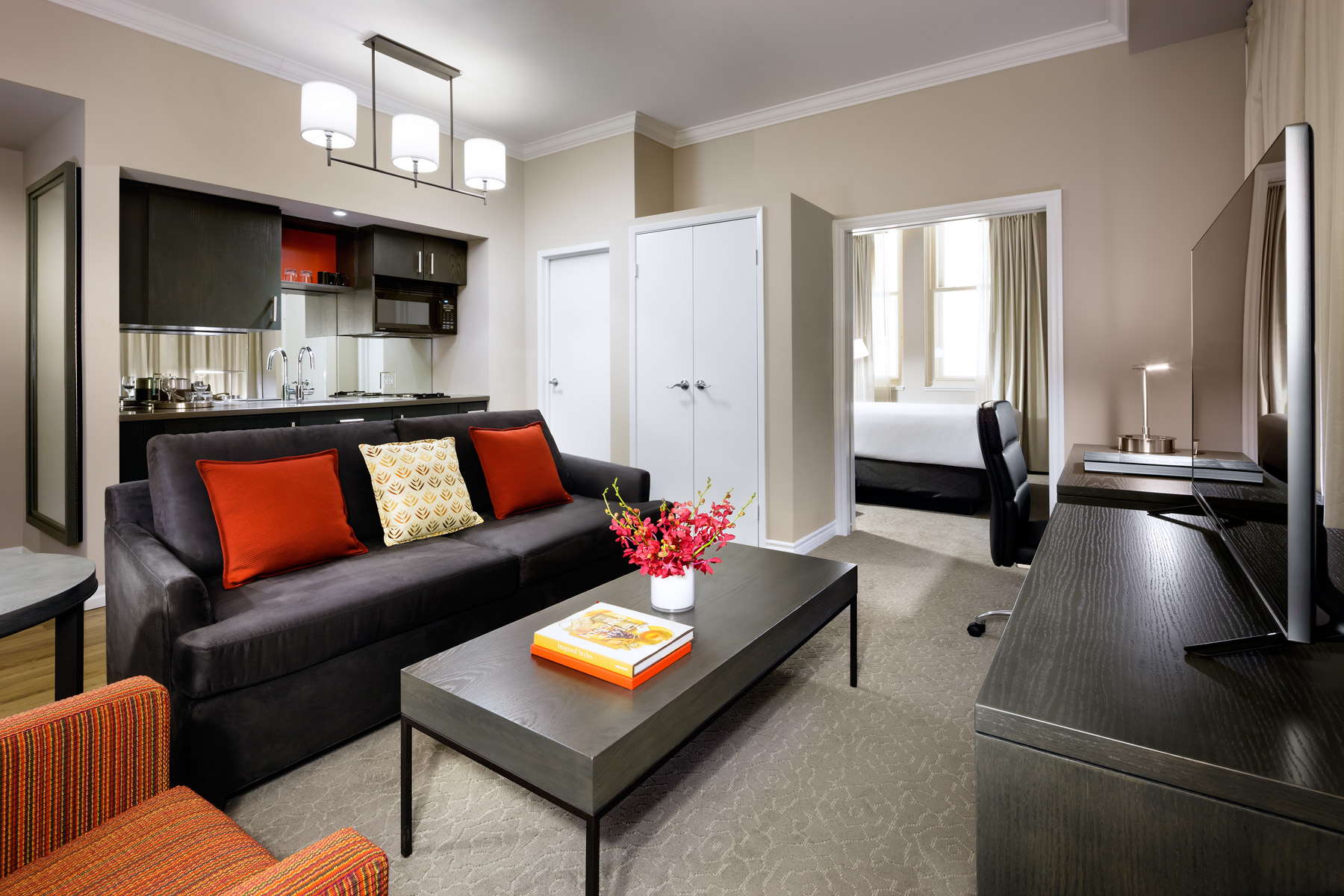 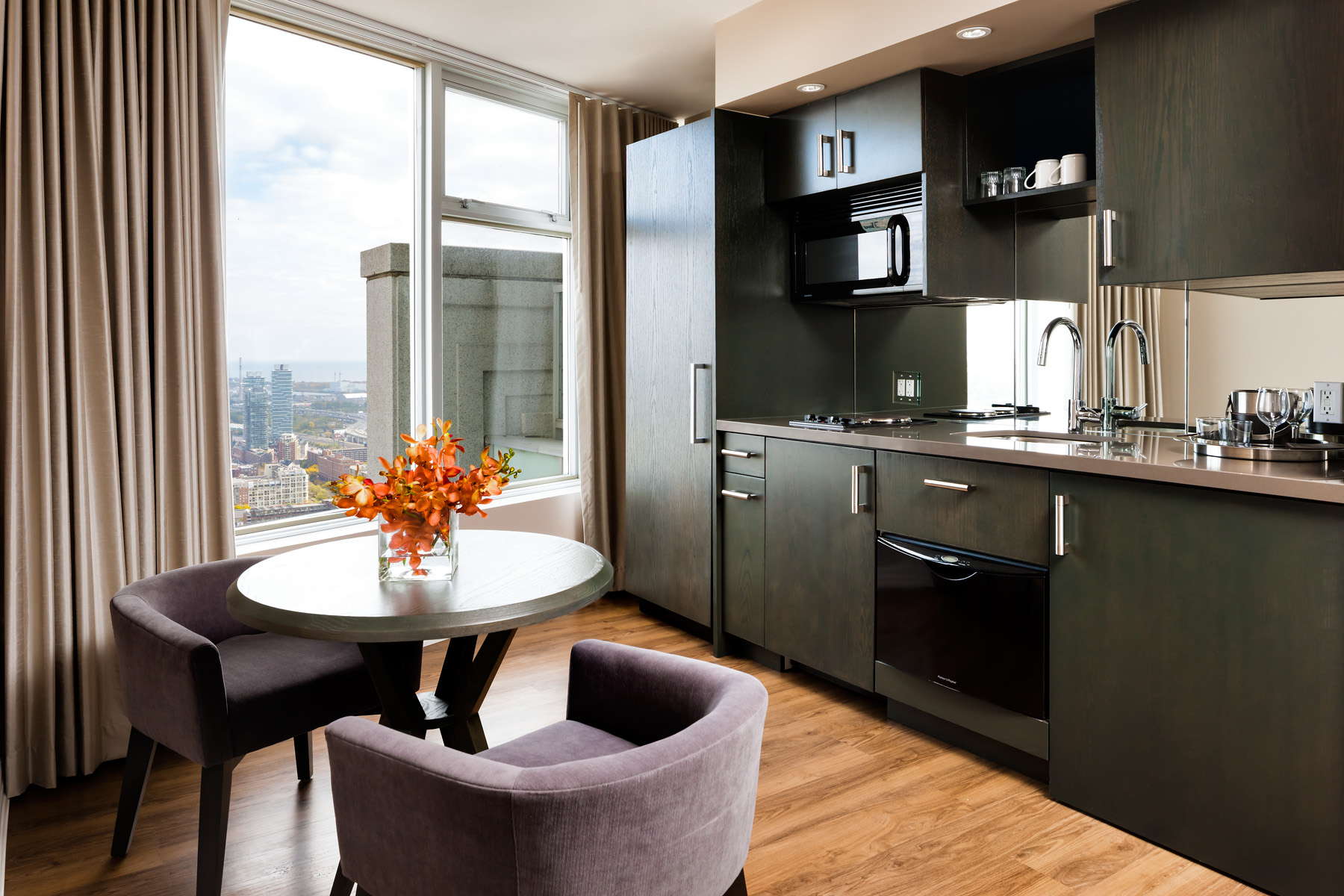