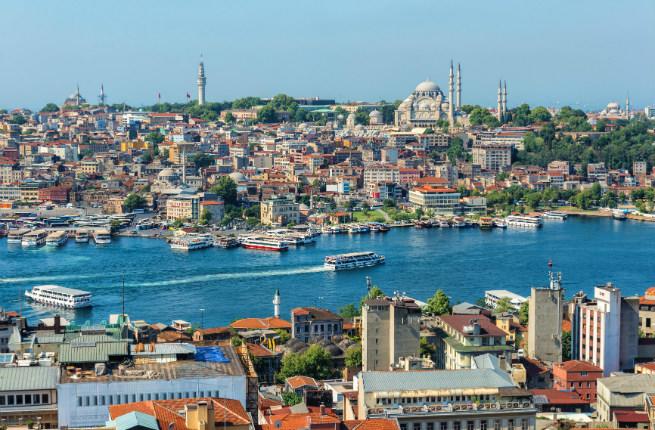 Once known as Constantinople, Istanbul owns the distinction of being the only city in the world that occupies two continents. Half in Europe, half in Asia, this Turkish city offers jarring juxtapositions of old and new at every turn: a centuries-old mosque here, a shard-like skyscraper there; greased auto parts for sale here, Tom Ford pumps for sale there. Heels aside, a getaway to Istanbul is surprisingly affordable thanks to the favorable exchange rate and a well-tuned tourism infrastructure. Here’s how to experience the city’s mystical allure, from Turkish breakfast to rooftop cocktails, in just a couple of days. 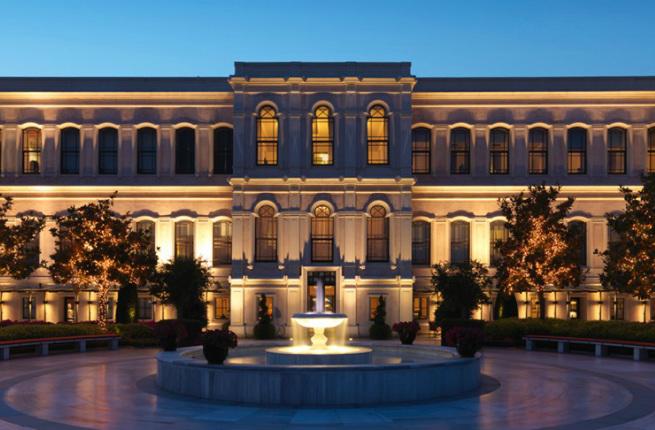 Most of the nonstop flights to Istanbul from the U.S. will get you into Ataturk International Airport in the late afternoon or early evening—rush hour. Because Ataturk is already a good half-hour from the city center without traffic, it's best not to make big plans for your first night. Grab a taxi or collect your private transfer (worth the splurge) after exiting customs and settle in for the ride.

Though it might add to your driving time, ask the driver to take the serpentine boulevard along the Bosphorus instead of the modern highway. (The Bosphorus is the wide, blue strait diving Europe and Asia—Istanbul is located on either side—and it is the city’s lifeblood.) On this road, you can absorb a better sense of the city’s layout as you pass the walled “Old City” of Sultanahmet, home to Istanbul’s major sights, and cross the fisherman-lined Galta Bridge into residential neighborhoods like Besiktas, where you'll find the Four Seasons Bosphorus (rooms from $306), converted from a waterside palace into Istanbul’s finest hotel in 2008. Though Istanbul isn’t short on beautiful hotels—the current government has fueled a construction bubble, to much controversy—the Four Seasons’ pair of properties are widely regarded as the best. (The original is in Sultanahmet.)

After checking into your room—book one with Bosphorus views—head back out for dinner in Besiktas. A ten-minute walk brings you to Sidika Meze (average main: $9), a small, family-run spot decorated with vases of dried lavender, votive candles, and mobiles of felt fish. Seafood is the specialty here; start with a spread of cold meze (walnut-stuffed olives, pistachio-feta spread) and then order tender, grilled octopus tentacles, and grilled bass wrapped in grape leaves. Don't skip the unusual Turkish wines, either. After dinner, wander back down Sair Nidem Caddessi, where the bakeries and laundromats of Sidika’s block give way to sidewalk cafes and posh boutiques as you near the W Hotel and the main road. Pop into Mendel’s (average dessert: $5), a slick pastry shop and chocolate atelier, for a white mocha and pistachio cake buried in sliced bananas and strawberries. 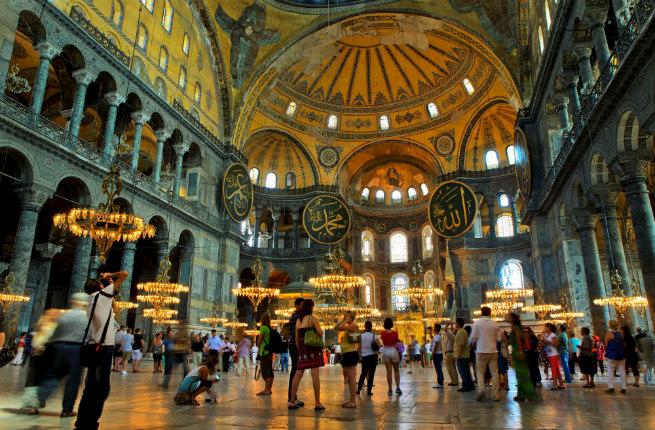 Istanbul’s biggest attractions—Topkapi Palace, Aya Sofya, and the Blue Mosque—can take up an entire day of sightseeing, so get an early start to fuel up with Turkish breakfast. There are dozens of kahvali solanlari (breakfast salons) specializing in the leisurely, table-covering spreads of cheeses, breads, tomato-and-cucumber salad, preserves, and more. Halfway between the Four Seasons and Old City in the charming Cihangir neighborhood, grad students, retired doctors, and food bloggers linger at Van Kahvalti Evi (Defterdar Yokusu 52; average main: $4), a sun-washed spot with wooden tables on the sidewalk that wouldn’t be out of place on Abbot Kinney Boulevard. Here, Turkish breakfast gets a Kurdish bent (Van is a city in the eastern part of the country near the Iranian border) with trucked-in cheeses freckled with wild herbs, and raw honeycomb served with kaymak, a clotted cream that’s like a cross between ricotta and crème fraîche.

After breakfast, head down the road that twists and pitches like a roller-coaster track toward the main avenue. If you’re game to walk, Sultanahmet is about two miles away, or you can hop in a cab or take the faster, very user-friendly, modern tram that runs right into the Old City; you want the T1 Bagcilar-Kabatas line ($1.40). Get off at the Gulhane stop and wander through Gulhane Park, a fairy-tale greenway dotted with strolling couples and public art, to Topkapi Palace, the lavish headquarters of Ottoman Empire rulers for 400 years. Set around three landscaped courtyards, the palace’s can’t-miss galleries include the armory (stacked with ancient weapons) and the treasury (stacked with valuables bequeathed to—and pillaged by—the Ottomans). The latter has a stunning view of the Bosphorous from its terrace, making it a favorite spot for the selfie stick-wielding set.

Grab a snack from one of the carts standing outside the palace grounds; beneath peppermint-striped canopies, most sell roasted chestnuts, grilled corn, or simits, the ubiquitous, sesame-speckled bread rings. Wash it down with a fresh-pressed juice (pomegranate and orange this time of year) from one of the nearby stalls, then head off to the Blue Mosque to gape at architect Memhet Aga’s shimmering confection of stained glass and aquamarine tiles. Note that during prayer times, all tourists are brusquely shuffled out of the mosque; just listen for the muezzin’s hypnotic call from the minarets. You won’t have this problem at Aya Sofya, which Mustafa Kemal Ataturk, Turkey’s first President, decommissioned as a mosque and turned into a museum in 1935. Before this Byzantine masterpiece was a museum or a mosque it was the world’s grandest church, commissioned by the Emperor Justinian and completed in 537 A.D. The result is a structure where iconography from three of the world’s great religions exist under one roof—or rather, one 18-story, 110-foot-diameter dome.

Even seasoned independent travelers might want to consider hiring a guide in Istanbul, for the educational aspects alone. (Turkish guides have to go through rigorous training before receiving their licenses.) Guidebook author Serif Yenen runs small group tours (max. 12 people) that visit the above, plus the labyrinthine Grand Bazaar for $85 per person. You can also hire a private guide through Yenen’s company for $100 per person, not including the costs of museum admissions and transportation.

After a day of heavy sightseeing, head up to the rooftop of the Tomtom Suites, a boutique hotel housed in a former Franciscan nunnery in bustling Beyoğlu. There, restaurant Nicole offers two luxurious, modern tasting menus ($58 or $69) rooted in Turkish ingredients and tradition. Sit out on the terrace if it’s not too chilly, and watch the city lights flicker while you dine. 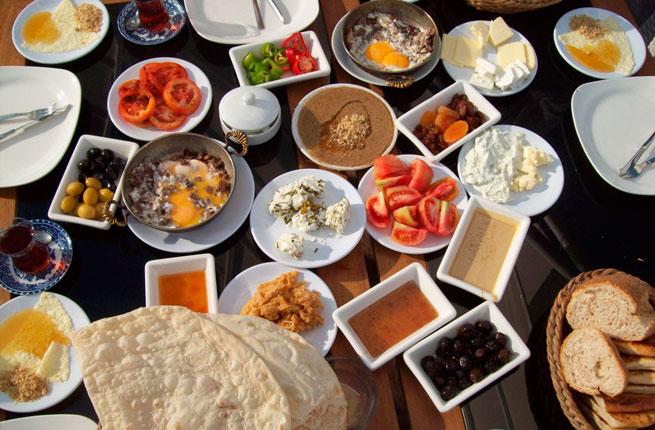 You’ll be back on the Turkish breakfast beat Sunday morning, though this time with Istanbul Eats (average tour: $125 per person), widely regarded as the must-book outfitter for food lovers visiting the city. At Çakmak Kahvalti Salonu (average main: $3), the first stop on the “Born on the Bosphorus” culinary walk, the kaymak is made with buffalo milk; it’s denser, creamier and completely different from the cow’s-milk version at Van Kahvalti. You’ll bounce around Besiktas, sampling döner and a caramelized milk pudding thickened with finely shredded chicken breast, before crossing the Bosphorus on one of the public ferries to bubbling Üsküdar on the Asian side, where the grazing continues with pickles, olives, boza (a surprisingly delicious fermented millet drink that tastes like a cross between lemon sherbet and apple sauce), Turkish delight flavored with rose petal, and goat cheese aged in wooly goat skin.

The walk winds down in nearby Kuzguncuk, a tony enclave of tree-lined streets and Victorian architecture. At Hatice Annenin Ev Yemekleri (average main: $5), one of the area's man “tradesman restaurants” frequented by local merchants, you’ll sit down for straightforward, soulful, home-cooked dishes like zucchini patties, stuffed eggplant, and manti, Turkish dumplings cloaked in yogurt sauce and chile butter. After saying goodbye to your guide (hopefully it’s the wonderful Ugur Ildiz), catch the ferry back to Besiktas. You should be able to pop into the handsome Naval Museum, located right off the dock, for a quick look before it closes at 5 pm.

You’ll be too full to eat a big dinner, so just wander back to your hotel, maybe stopping to grab a sack of stuffed mussels, the house specialty at Midyeci Ahmet (average main: $5) on Ciragan Caddesi, on the way. A cocktail at the Four Seasons’ YALI (average main: $15) is exactly what you'll need. The dapper, deferential staff mixes up classics like the Americano and Negroni, as well as Ottoman-inspired creations made with mint lemonade. Or just do like the locals and order raki, the anise aperitif and Turkish cousin to ouzo, served with ice water on the side. After a couple of glasses, you’ll understand why it’s known as “lion’s milk.”

In terms of finding luxury and value, the Four Seasons Bosphorus is unbeatable. You could stay also stay at Four Seasons Sultanahmet (rooms from $288), housed in a saffron-colored former prison; it’s more convenient to the sights but also less stitched into the local fabric. Jumeirah’s Pera Palace Hotel (rooms from $195) has a historic guest register (Hitchock, Hemingway, Christie), soothing rooms, and an underground spa. For something younger and more design-focused, Mama Shelter Istanbul (rooms from $100) features the same affordable, louche style it trademarked in Paris.

Istanbul has four true seasons. Avoid summer (hot and humid) and winter (surprising amounts of snow) and stick to fall or spring, when you’ll find better deals and better weather.

HOW TO GET THERE

Turkish Airlines, the country’s flag carrier, currently flies nonstop between Istanbul and eight U.S. cities: New York, L.A., D.C., Chicago, San Francisco, Boston, Houston, and Miami, with direct flights from Atlanta coming online in May 2016. Until the airline comes to your city—and they probably will, as they’re on a relatively aggressive expansion track in the U.S. market—most routes will connect you through London; Istanbul is a three-hour hop from the British capital.