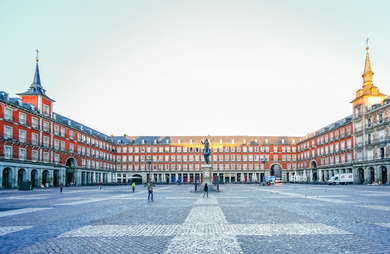 Housed in the Carrión Building, Madrid’s most iconic Art Deco structure, the Vincci Capitol is a contemporary hotel situated on Gran Vía among the city’s top theaters and big-box clothing stores. The hotel attracts a diverse clientele with its warm service and unbeatable views, though some leave disappointed by its deteriorating décor and unremarkable breakfasts. Film buffs will feel at home in the fourth- and fifth-floor “Cinema” rooms, whose Hollywood motif is a wink to the historic Cine Capitol theater, located on the ground floor.

Businessy rooms are comfortable if slightly insipid with dark-wood floors, gray curtains, and outdated TVs. Though the décor may not inspire you, the gorgeous views of bustling Gran Vía—provided you book an exterior-facing room—most certainly will. Coffee-makers and kettles are conspicuously absent, as are water glasses (one guest reported a €3 surcharge when these were requested).

YOU SHOULD KNOW Jacuzzis, featured in a handful of rooms, have fallen into disrepair with some guests complaining about mold, funky odors, and nonfunctional jets.

Though bathrooms are consistently clean and stocked (albeit skimpily) with toiletries, a few are in dire need of a facelift with loose shower knobs, cracked tiles, and overflowing tubs.

Decked out in purple and gold and illuminated by faux-crystal chandeliers, the lobby is a misguided attempt at opulence—a motif that repeats itself throughout the property. To the hotel’s credit, the front desk is manned by a team of consummate professionals eager to assist.

YOU SHOULD KNOW Entryway steps make for uncomfortable lugging, and some rooms require two elevators to reach. For a hotel at this price point, it’s surprising that porter services are not offered (receptionists motion you toward a luggage cart that you load yourself).

A steep fee is required to access the spa, which features a sauna and Turkish baths.

Breakfast is certainly passable, with various egg dishes and freshly cut fruit, but for the gouging price of €15, your money is better spent elsewhere. A minor grievance: fresh-squeezed orange juice is the norm in Spain, even in the seediest breakfast joints, yet somehow Vincci Capitol gets away with serving the from-concentrate stuff.

If you can fix your gaze away from the gaudy fuschia furniture and out to the city skyline, you’ll have a pleasant time on the rooftop terrace (or, if it’s too cold outside, in the pretentiously named Reims Bar).

The hotel is within walking distance from most of Madrid’s top attractions, but for adventures further afield, hop on the metro at Callao (Lines 3 and 5).

Avoid the tourist traps along Gran Vía and instead stroll over to Conde Duque, Madrid’s hottest new neighborhood, known for its eclectic mix of trendster tapas spots and dusty abuelo bars. Get your caffeine fix at Federal Café (12-minute walk), an American-owned spot that has the only decent coffee (and American-style brunch) in the vicinity. Come nightfall, head to El Maño (12-minute walk) for old-school tapas (garlicky white anchovies, Spanish-style meatballs, and spicy fried potatoes), or post up at La Carbonera (11-minute walk), a pocket-size “cheese bar” known for its hard-to-find quesos and funky wines by the glass.

Beer lovers unite at Fábrica Maravillas (7-minute walk), Madrid’s only city-center brewpub. Choose from a dozen draft beers that were brewed just steps from your barstool. If cocktails are more your speed, duck into La Bicicleta, a retro café one block up that transforms into a low-key, dimly lit bar by night.

If you’re an Art Deco enthusiast who relishes being in the thick of things, Vincci Capitol might be up your alley. Otherwise, we can only recommend this hotel as a plan B (or C, or D). 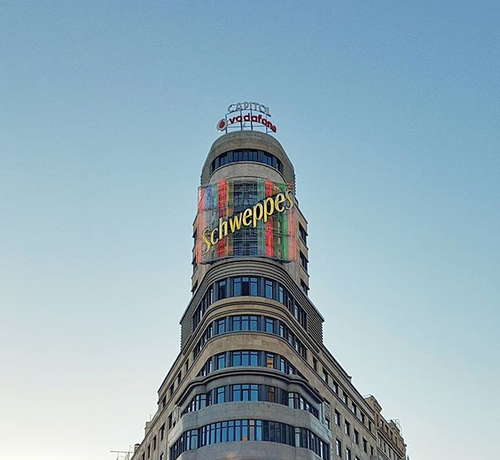