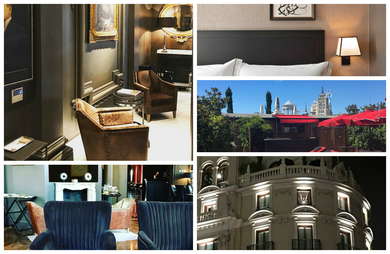 Dozens of hotels flank Gran Vía, Madrid’s main artery, but only one of them can claim five stars: The Principal. Opened in 2015 following a €3.5 million remodeling, the hotel stands out for its stately façade, luxury townhouse feel, and swanky rooftop cocktail bar—the latter being the best vantage point to admire the newly restored dome of the Metropolis, a Beaux-Arts marvel. The property’s central location, within walking distance of Retiro park and the “Golden Triangle” of museums, is another great selling point.

Accommodations feature soothing gray tones and minimal furnishings, design touches that make the compact rooms feel slightly more commodious than they actually are. Perks like Bluetooth speakers, international plug adaptors, and complimentary shoeshine make you feel like you’re in the lap of luxury.

YOU SHOULD KNOW Don’t expect silent nights in the east-facing rooms, whose windows fail to block out the loud shouts of weekend revelers.

Check-in staff are friendly and efficient, but you won’t want to linger long in this lobby; for lolling and lounging, head to the Terraza rooftop bar.

Don’t confuse the street-level entrance with the lobby, which is actually located on the sixth floor. 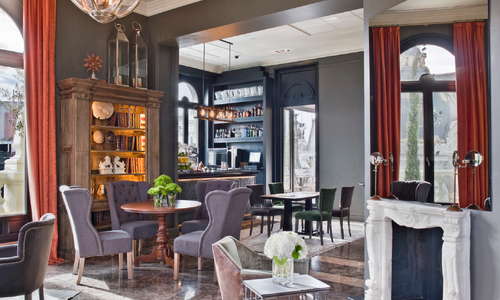 There’s a small overflow pool on the roof deck (but nothing you can dip more than a toe into).

Private individual and couples treatments are offered upon request in the Wellness Suite. The petit sauna, which fits two, can also be booked in advance.

The abbreviated fitness center, outfitted with a treadmill, two stationary bikes, and a dumbbell set, is nothing to write home about. Early risers beware: The gym doesn’t open until 10 a.m.

Ramón Freixa, who presides over one (of the city’s five) two-Michelin-star restaurants, is the brains behind the menu at Ático, a high-ceilinged dining room specializing in playful nueva cocina dishes. 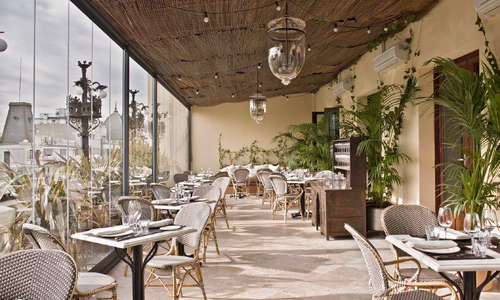 As one of the only rooftop bars in Madrid offering unimpeded 360-degree views, it’s no wonder there’s always a wait to snag a table at Terraza. Spring for a champagne cocktail (or a mocktail—they offer a generous list) and enjoy the sunset over the Sierra de Guadarrama mountains. 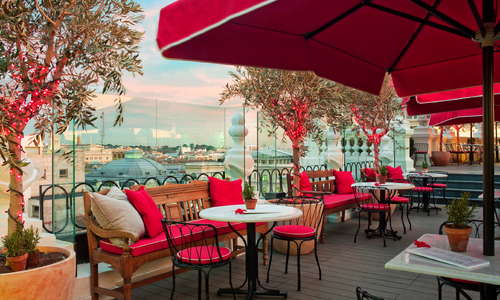 Walk a couple blocks north of the hotel, and you’ll be in the heart of Chueca, an upscale neighborhood known for its winding streets, gay-friendly atmosphere, and charming restaurants. Whet your appetite with Canary Island delicacies at Siete Delicatessen inside Mercado de San Antón (5-minute walk), a renovated market whose top two floors are packed with tapas stalls. From there, head a block north to Atlántico, a shiny new Galician restaurant known for its pristine raw seafood, or get your funghi fix at the neighboring El Cisne Azúl, an old-school joint specializing in mushroom dishes.

Beer lovers unite at Fábrica Maravillas (11-minute walk), Madrid’s only city-center brewpub. Choose from a dozen draft beers that were brewed just steps from your barstool. If cocktails are more your speed, duck into La Bicicleta, a retro café one block up that transforms into a low-key, dimly lit bar by night.

The Principal is a fresh, game-changing property in the heart of Madrid that eschews all the fusty pretentiousness you’ll find in many of the city’s five-star hotels. Its Terraza rooftop bar, with unbeatable views and polished cocktail list, is a destination in itself, as is the envelope-pushing Ático restaurant. What you see is what you get: a well-appointed urban crashpad designed to please any discerning traveler. 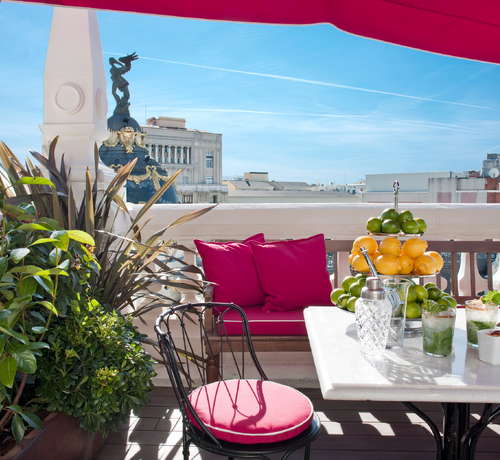 #1 The Best Hotels With Spectacular Rooftops in Madrid

#3 The Most Luxurious (Ahem, Expensive) Hotels in Madrid

#10 The Best Hotel Bars in Madrid 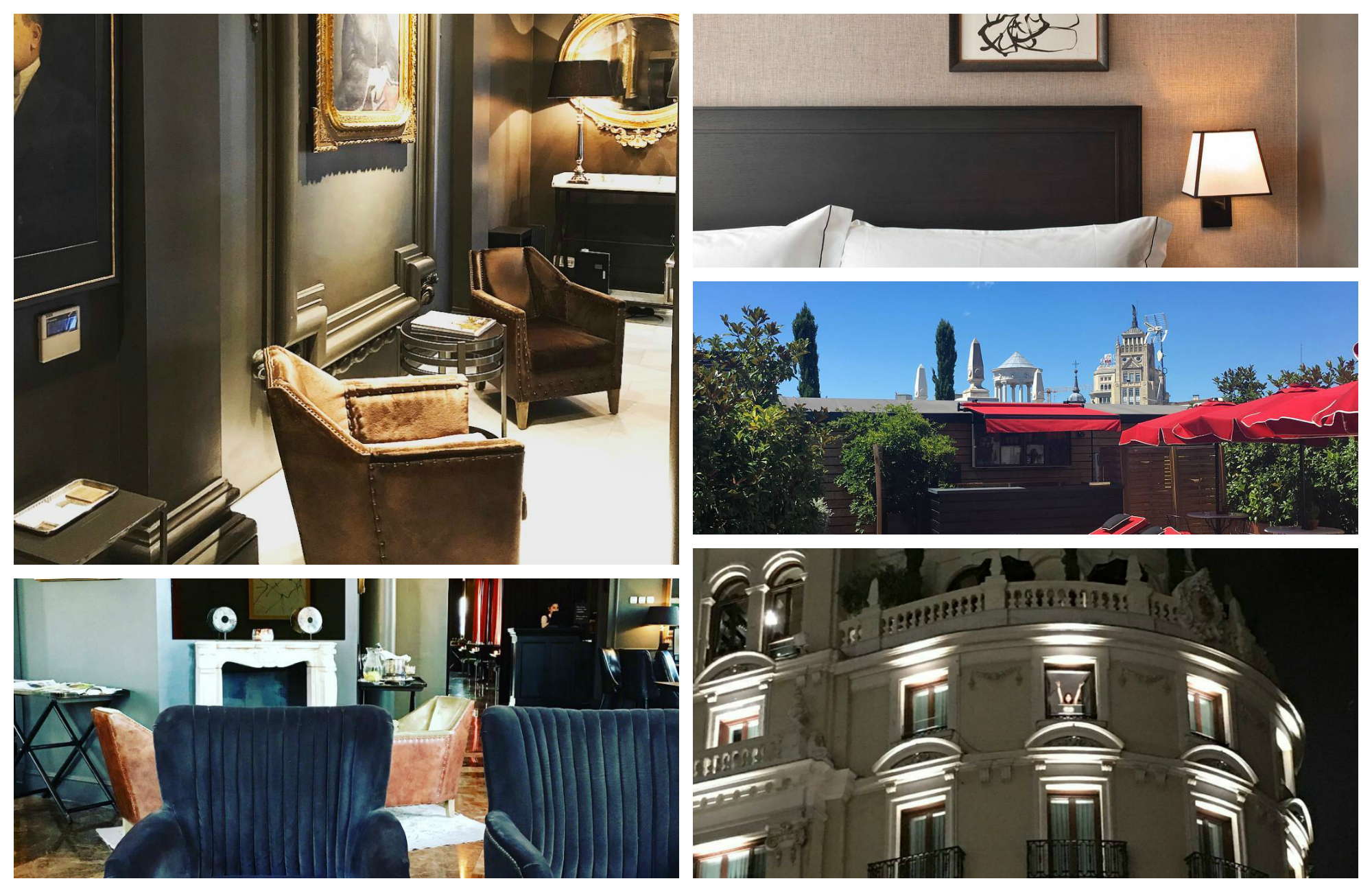 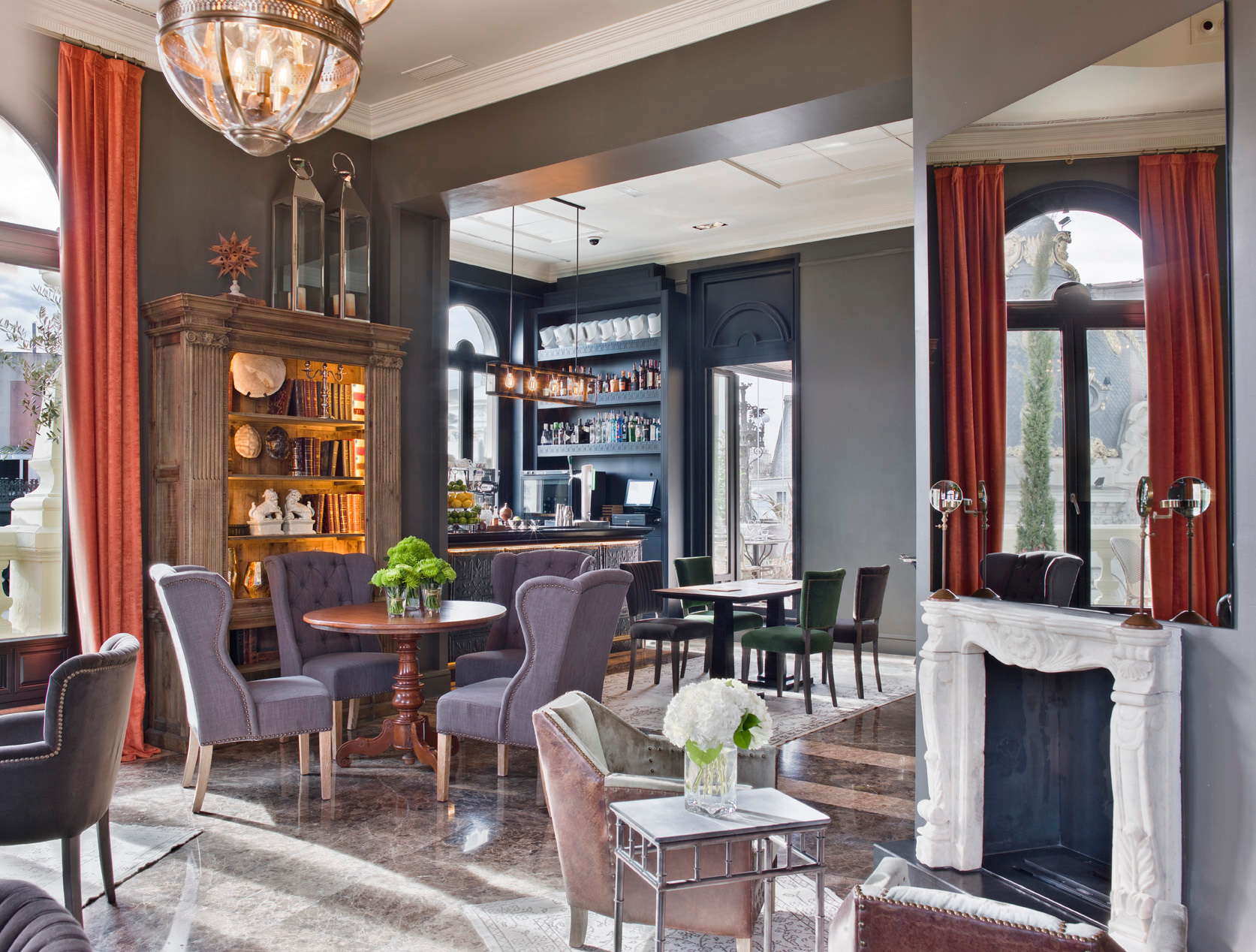 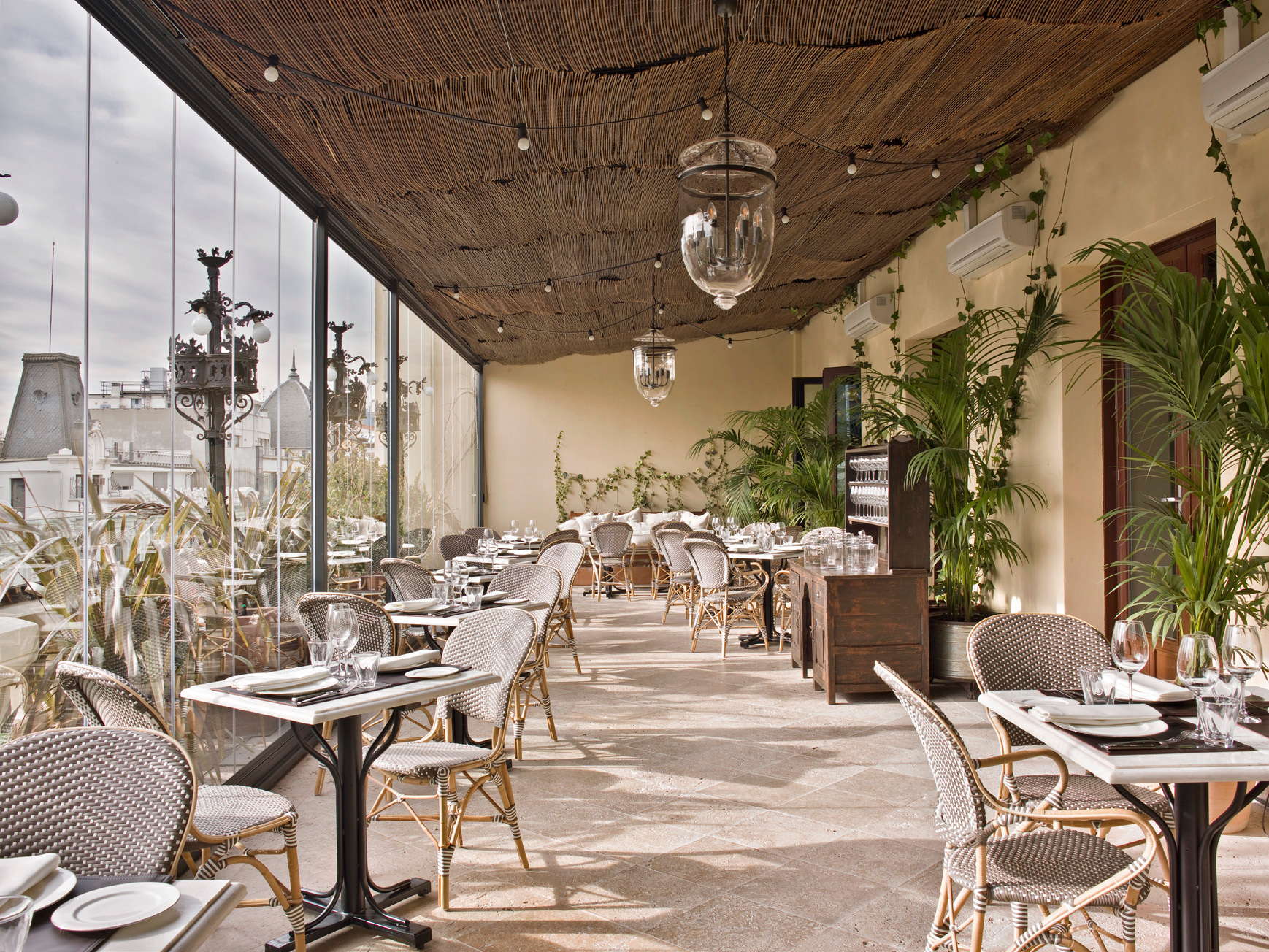 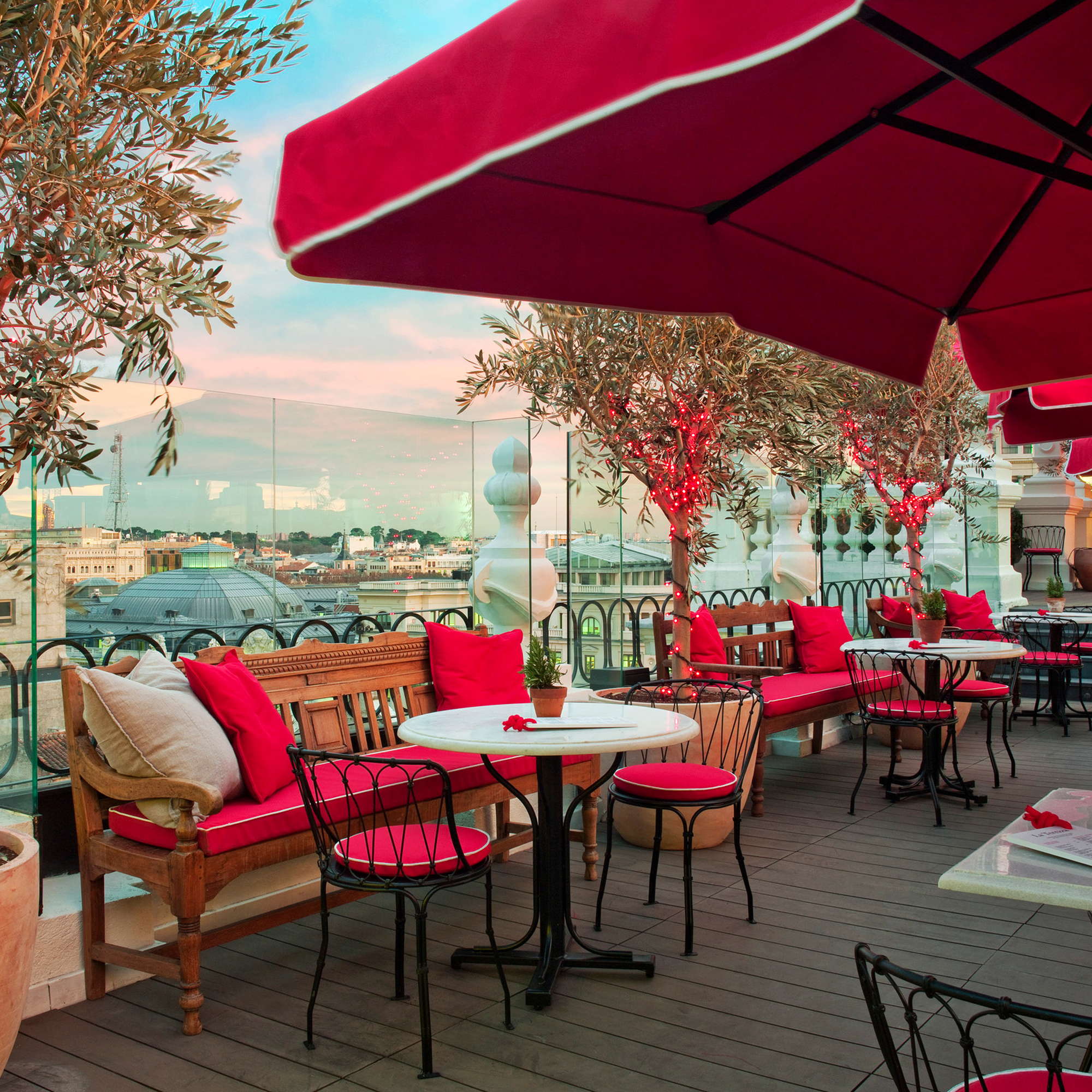