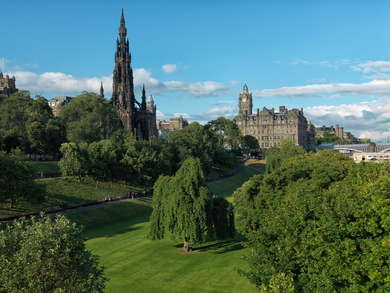 This grand landmark property, below the clock tower marking the east end of Princes Street, is a pretty special introduction to the Scottish capital. The lively buzz in the hotel's beautiful turn-of-the-century-esque lobby makes you feel as if you're at the center of Edinburgh high life. And indeed you are: this is where its greatest luminaries and visitors often choose to stay, and who can blame them? A wonderful top-end hotel with a great restaurant, bar and spa to match.

YOU SHOULD KNOW The hotel's Latin motto - featured in its stained glass windows in the wide corridors - is 'Nemo me impune lacessit'. Taken from the Royal Stuart dynasty of Scotland and James VI, it translates as 'no-one attacks me with impunity' - so we'll leave it up to you whether you think we're brave enough to criticise this fierce old dame where necessary (spoiler: we are).

The attention to detail in the elegant rooms—colors were picked to echo the Scottish heathers and moors—and the sheer élan that has re-created the Edwardian splendor is lovely. Rooms are stylish but still comfortable and welcoming, with Scottish-sourced textiles.

For fans of Harry Potter, the JK Rowling Suite is a once-in-a-lifetime (pricey) place to stay. The pleasant corner suite is where the author holed up for months to write the last Harry Potter book, and she left a note on the guest notepad which is now framed (as well as her signature on a bust). 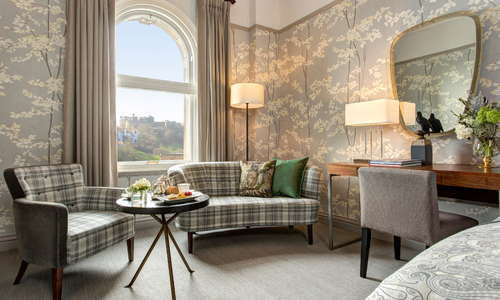 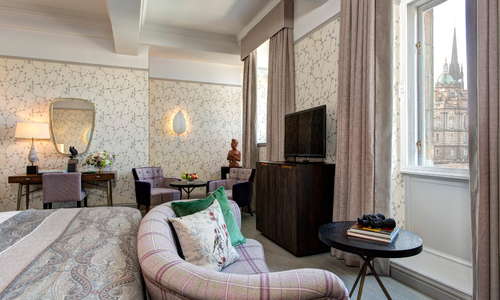 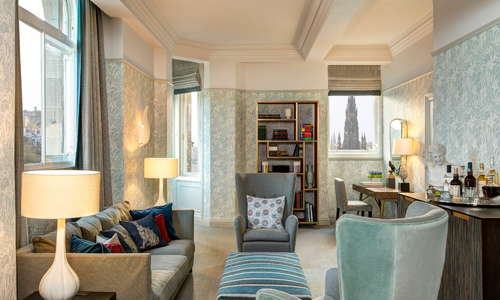 Bathrooms are all Italian marble, with showers over baths, and lovely luxurious toiletries, as you'd expect from a 5* property.

The lobby is gorgeous, with chandeliers and columns, a dark wood desk and a marble floor. Staff are exceptionally polite and competent. The flower display in the centre is often themed, recently paying tribute to Harry Potter and The Open. 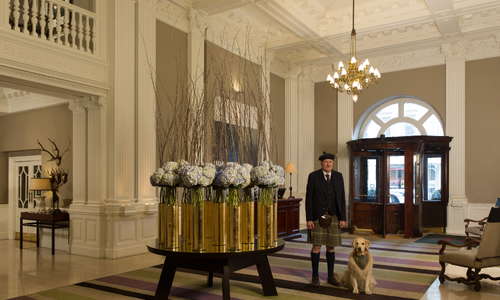 The hotel's luxurious spa is a good place to recover from overindulging in its bar or restaurants. There's a sauna, steam room, five treatment rooms, a mani/pedi room, a relaxation room and a yoga studio. The lovely Forte Organics products (made from the brand's own olives, oranges and lemons from its resort in Sicily) used here are also in the rooms. 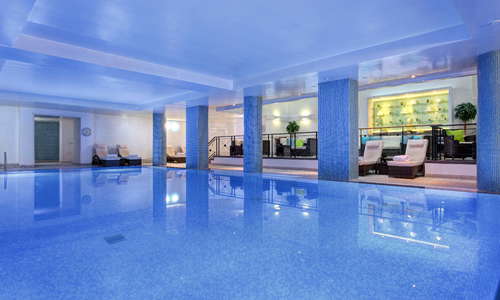 The spa includes a small-ish gym.

The hotel's main restaurant is the plush and clubby Number One, serving excellent Scottish seafood and game, for which it has been rewarded with a Michelin star (one of only four starred establishments in Edinburgh). The Balmoral is also about to open Prince Brasserie, a new restaurant and bar by Alan Roux (Michel Roux's son), a French-style brasserie with a fire pit. Breakfast is also great.

YOU SHOULD KNOW Make sure to book in advance for Number One, as it is popular. 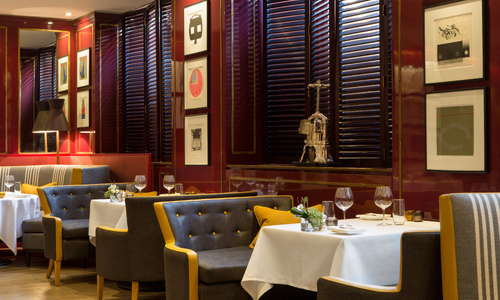 Photo: The Balmoral - Number One restaurant 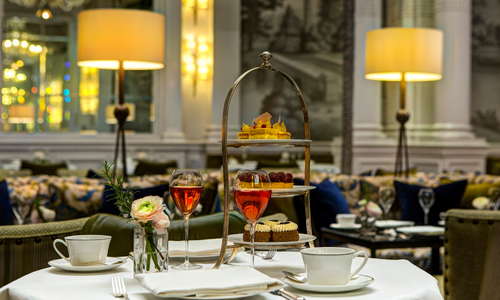 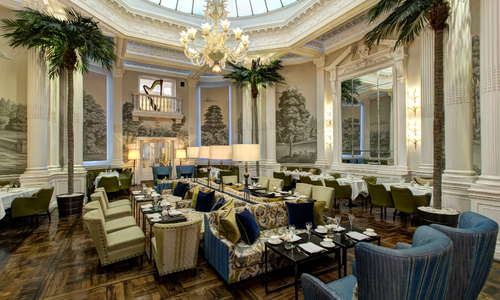 The 'Scotch' whisky bar serves 500 malts and blends - one of the largest selections in the world - accompanied by unusual bar snacks. It also hosts tastings and pairings. And don't miss the afternoon tea, served in the hotel's original Palm Court tearoom. It's a gorgeous spot, and the hotel will even run groups through some etiquette lessons while you eat if you feel the need! 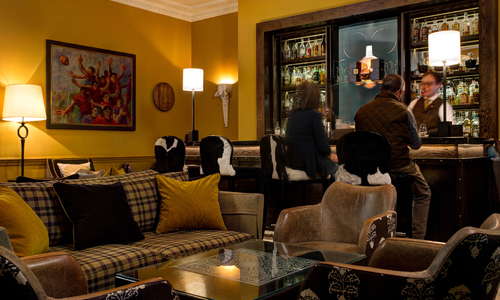 The hotel has one of the best locations in town - walking distance from all the main sights and well-connected for public transport too.

Try Dishoom (3-minute walk) for a change: it's the first non-London branch of the cool restaurant inspired by the Iranian cafes of 1920s' Bombay. Or try the lovely Gardener's Cottage (13-minute walk), within the Royal Terrace Gardens, for a seasonal treat.

For our money (and you'll certainly need it to stay at The Balmoral), this is the best luxury hotel in Edinburgh, from its fantastic restaurant to its respect for old-school hospitality. Rooms are lovely too, and the spa is a knockout. 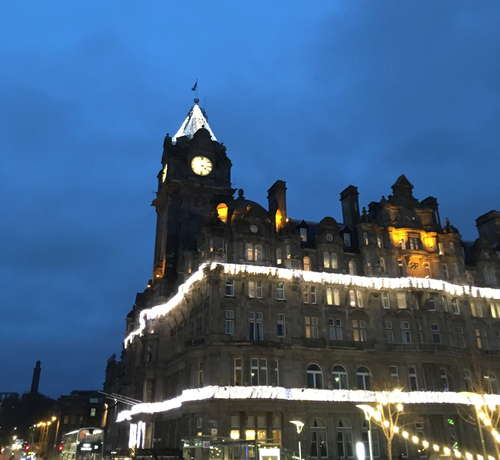 #1 The Best Hotels in All of Edinburgh

#2 The Most Luxurious Hotels in Edinburgh 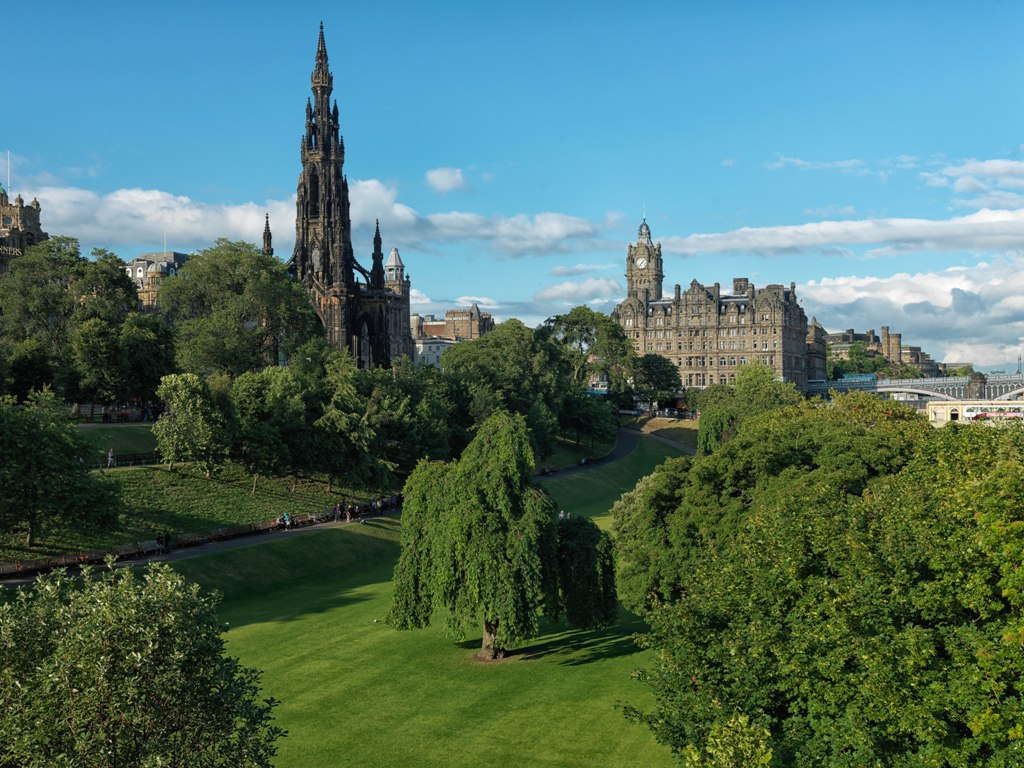 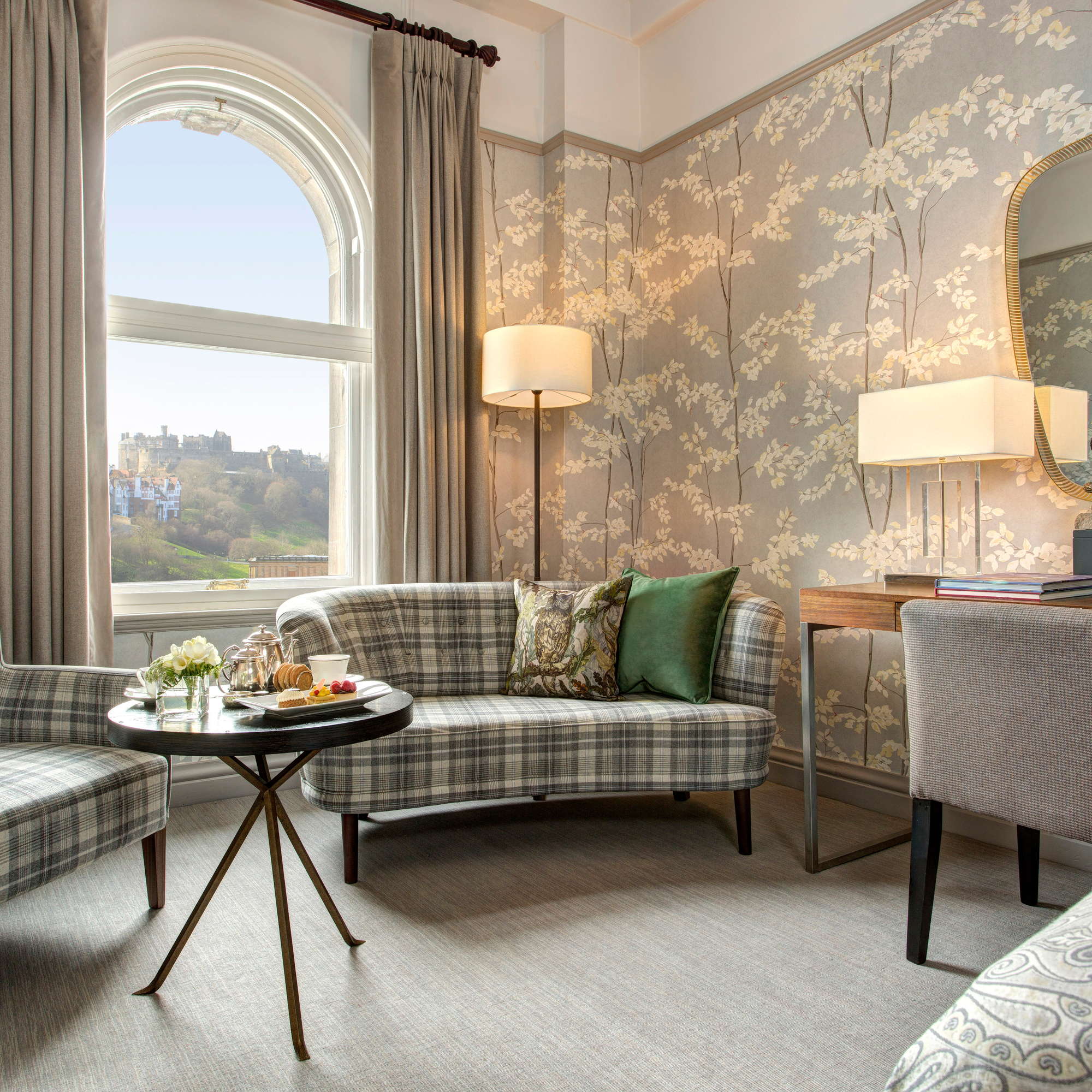 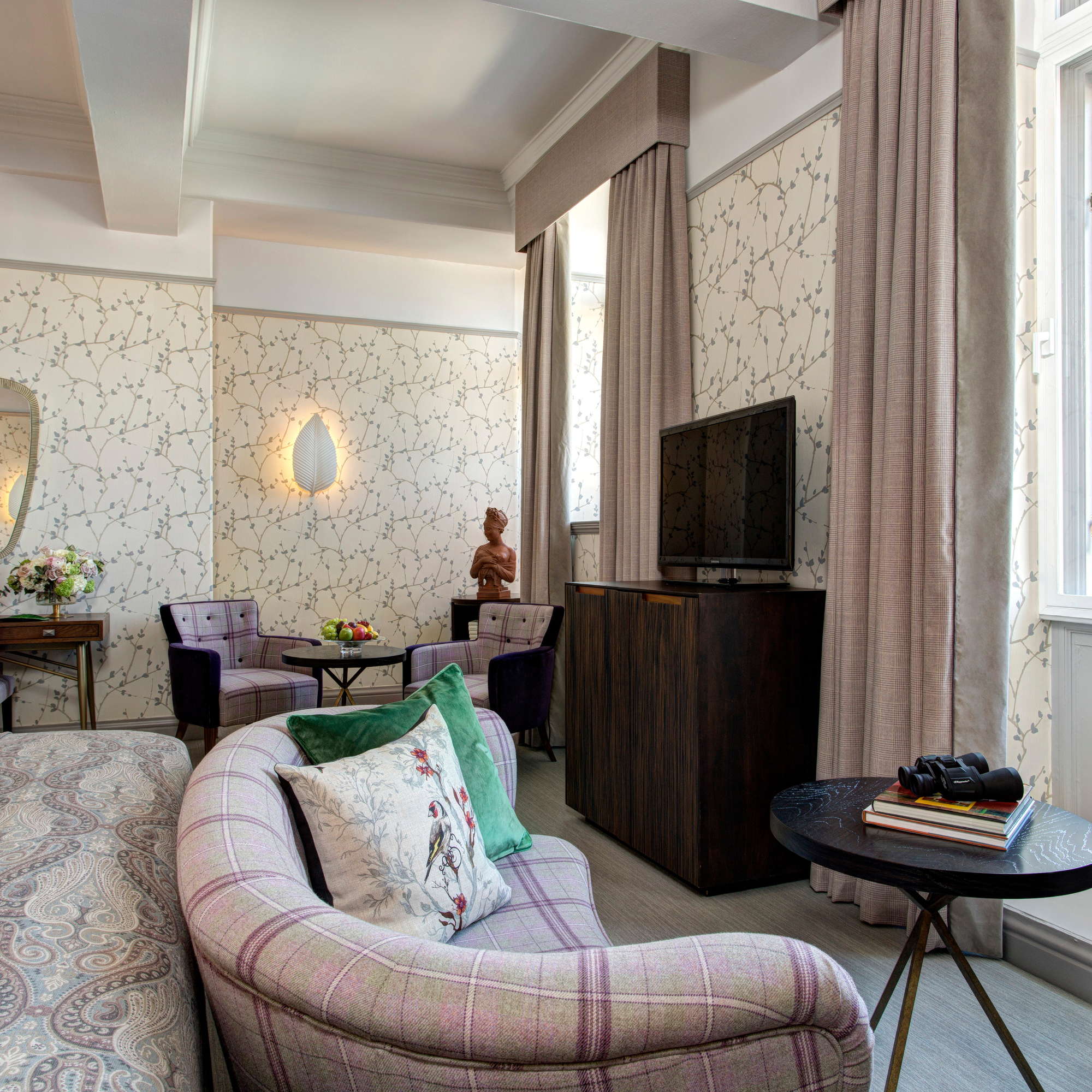 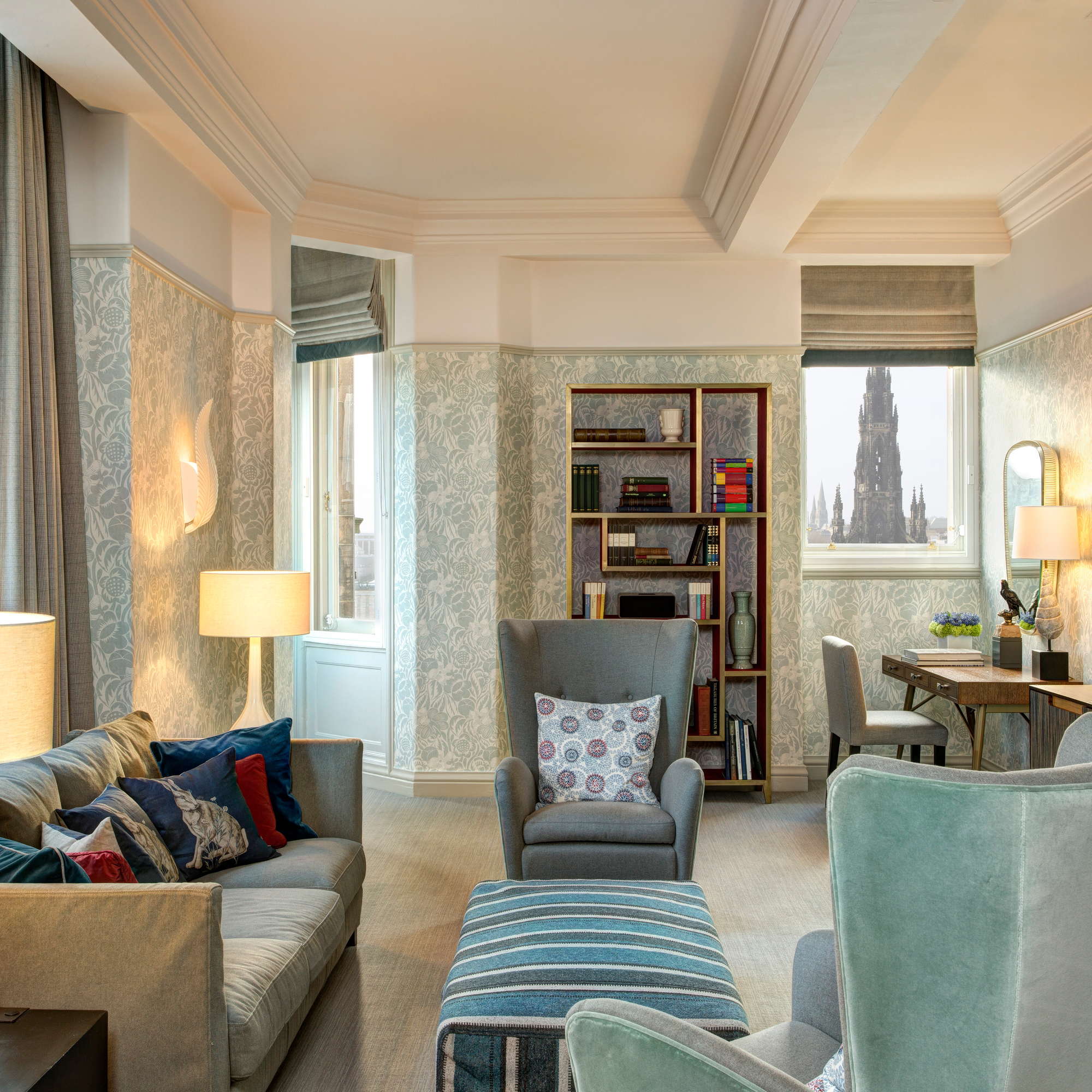 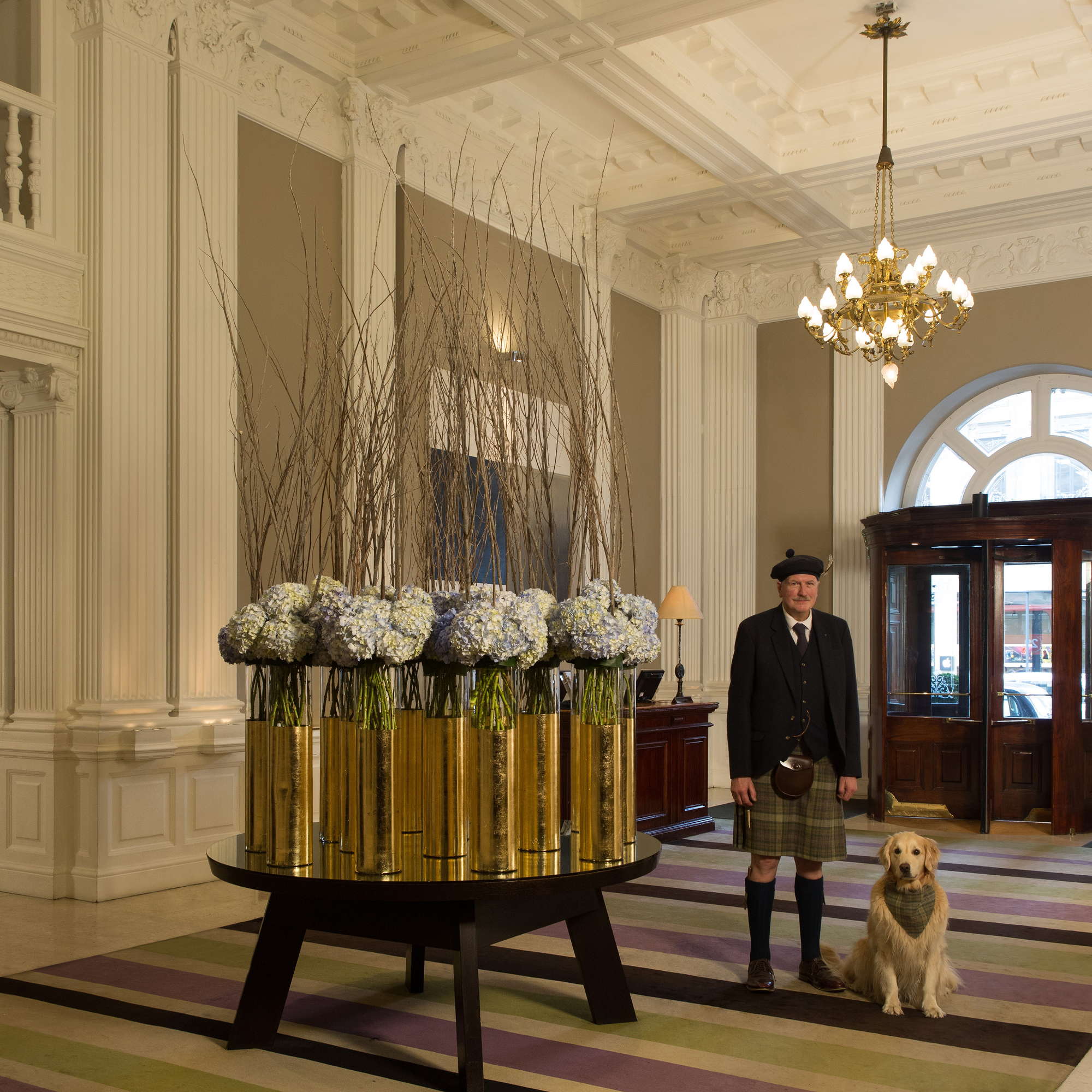 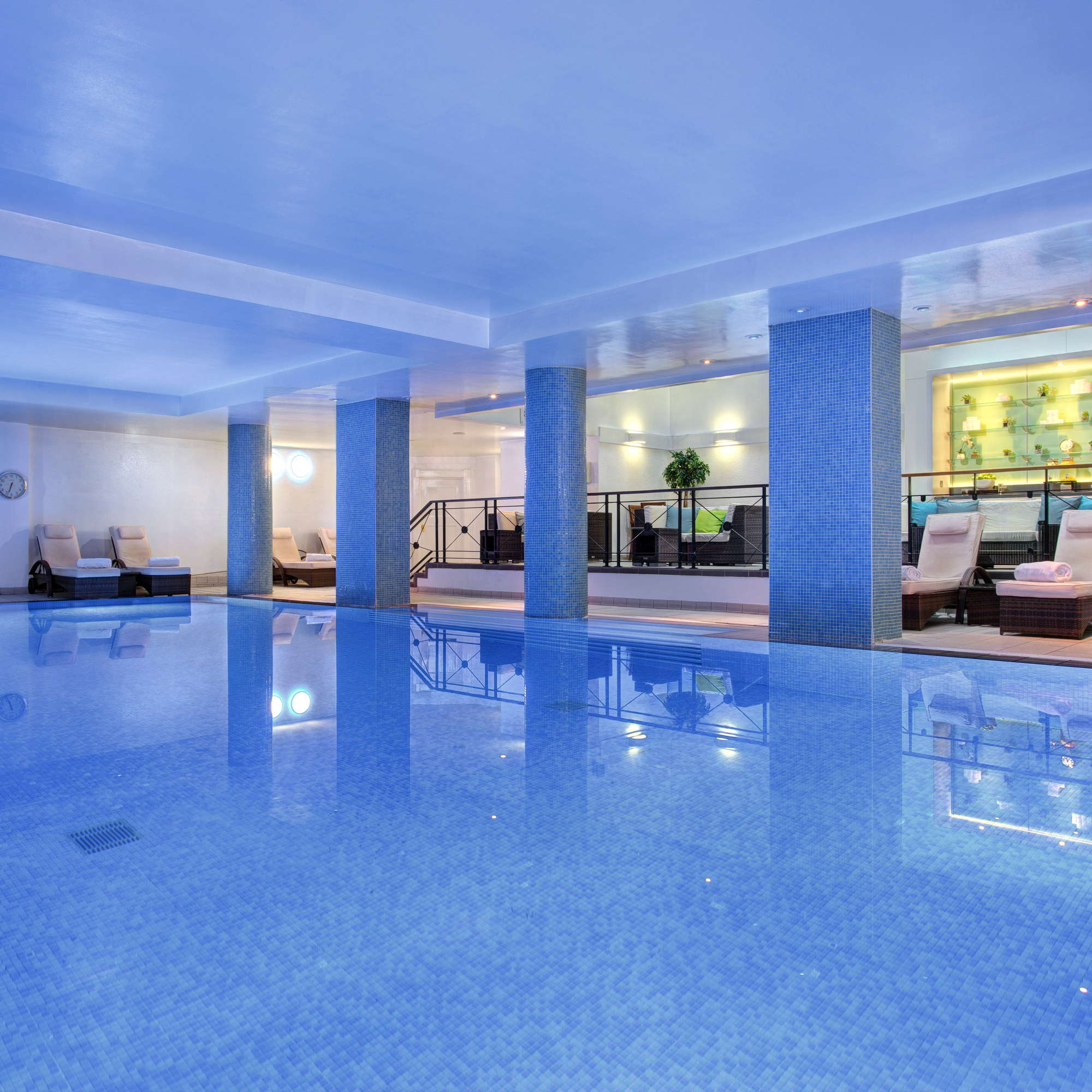 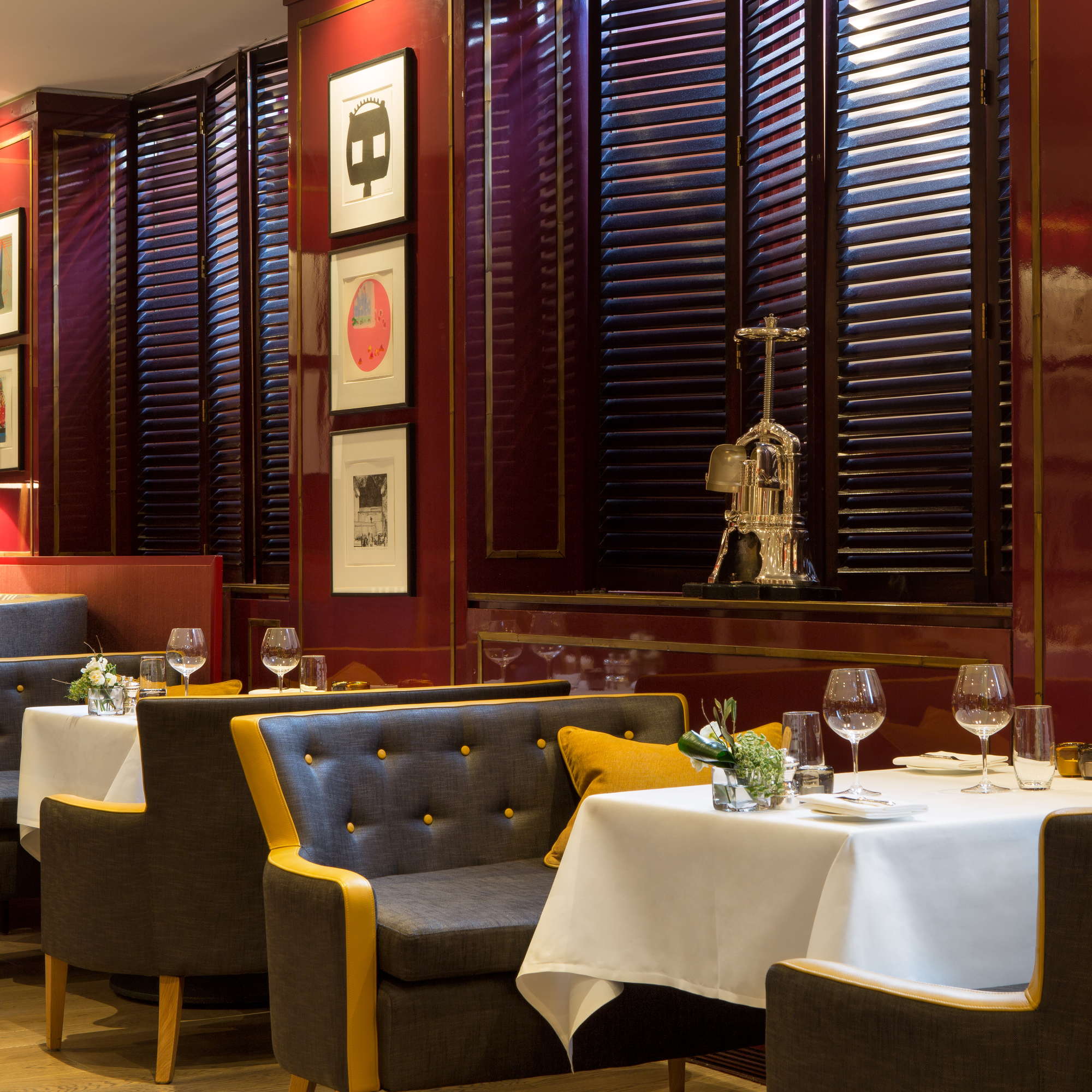 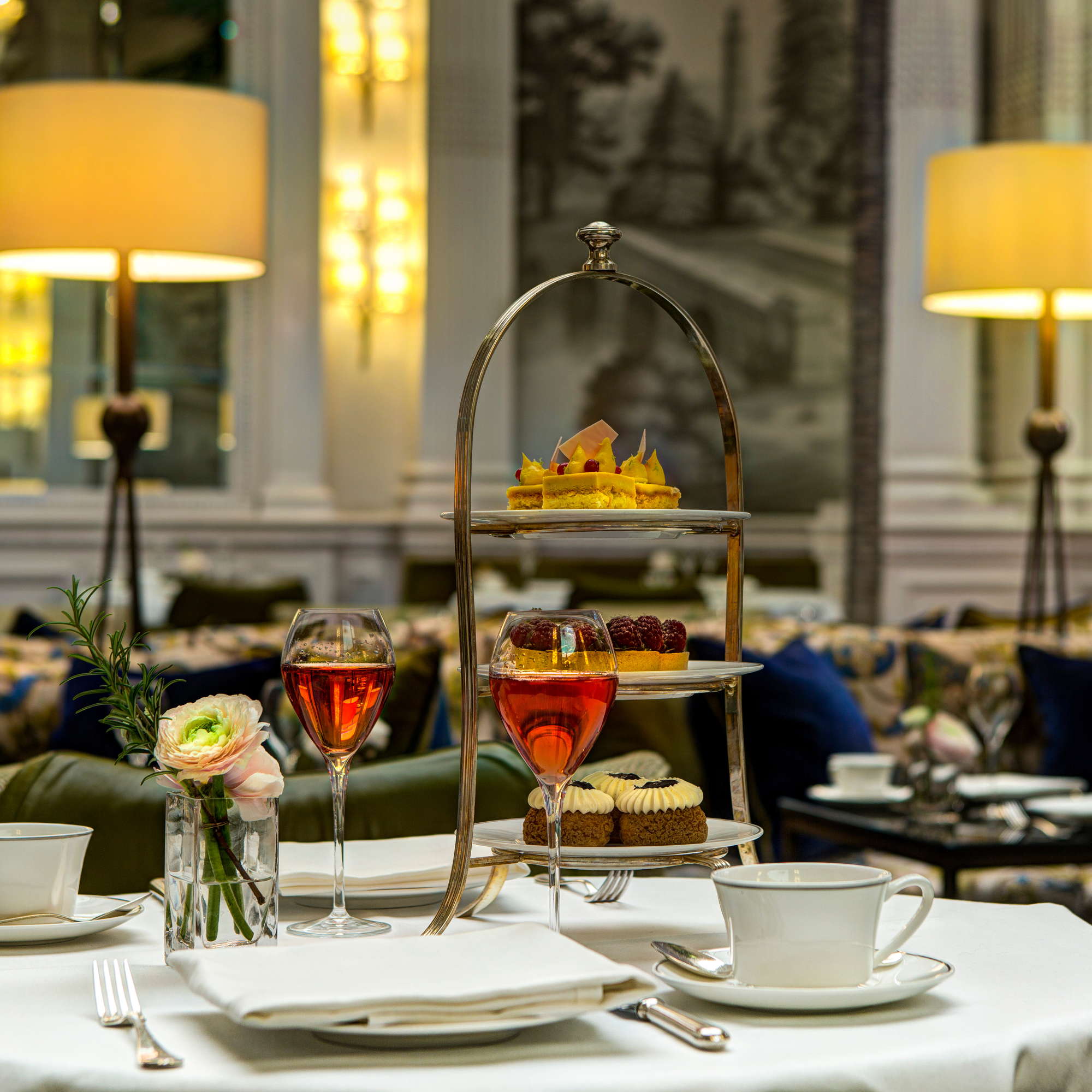 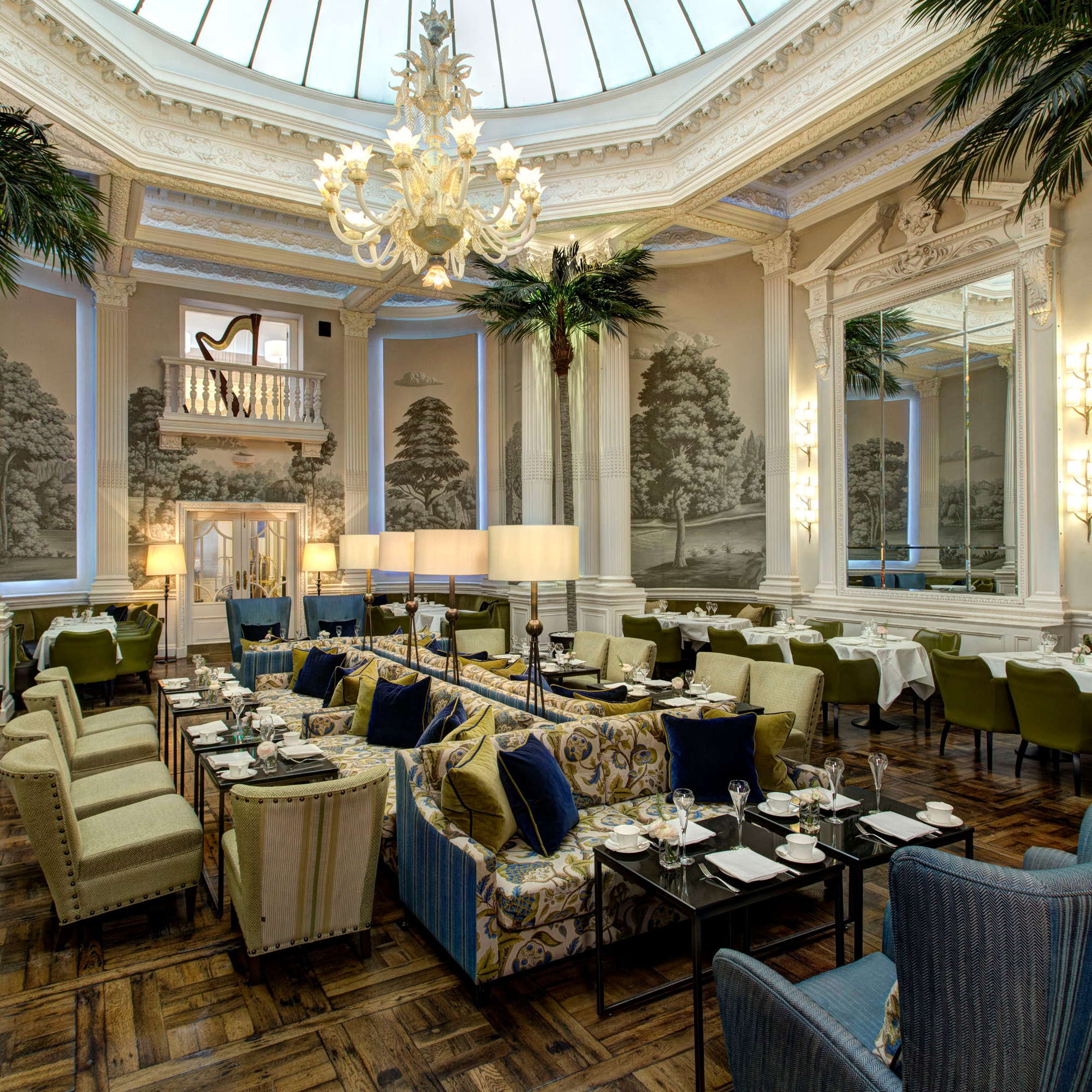 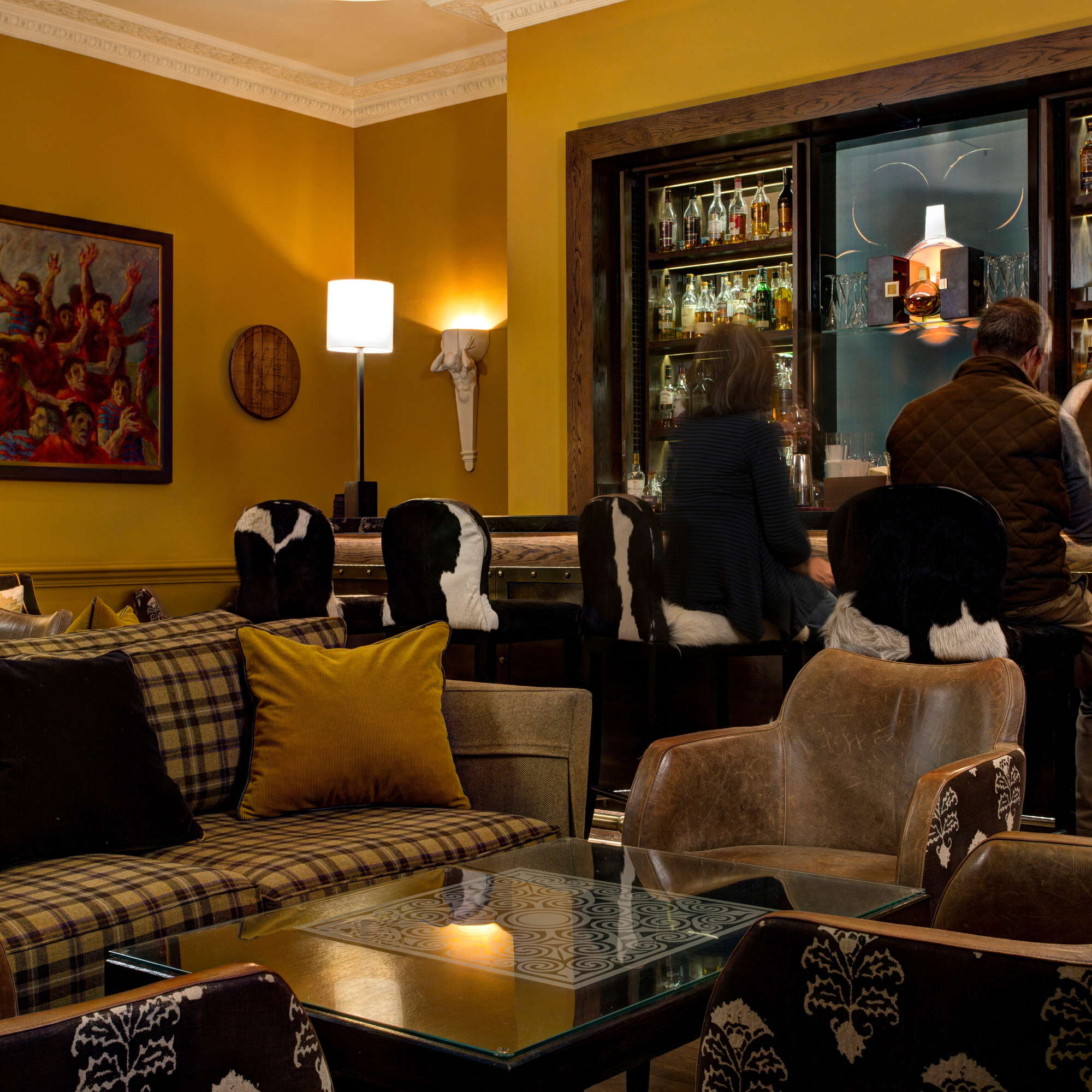