The isolated location of the Azores, nine hundred miles from the coast of Europe, gives the archipelago a unique culinary landscape. The cuisine is characterized by the local seafood of the nine islands, an abundance of beef and dairy (there are more cows than people on the Azores and they are the only source of traffic jams), pastries that stem from Portuguese traditions, and wine grown on volcanic soil. Due to their location in the middle of the Atlantic Ocean, the Azores was a frequent stopover point for Europeans sailing to and from Asia and Africa, resulting in an world of spices that are still used today. These are the twelve regional foods you must try while visiting the Azores. 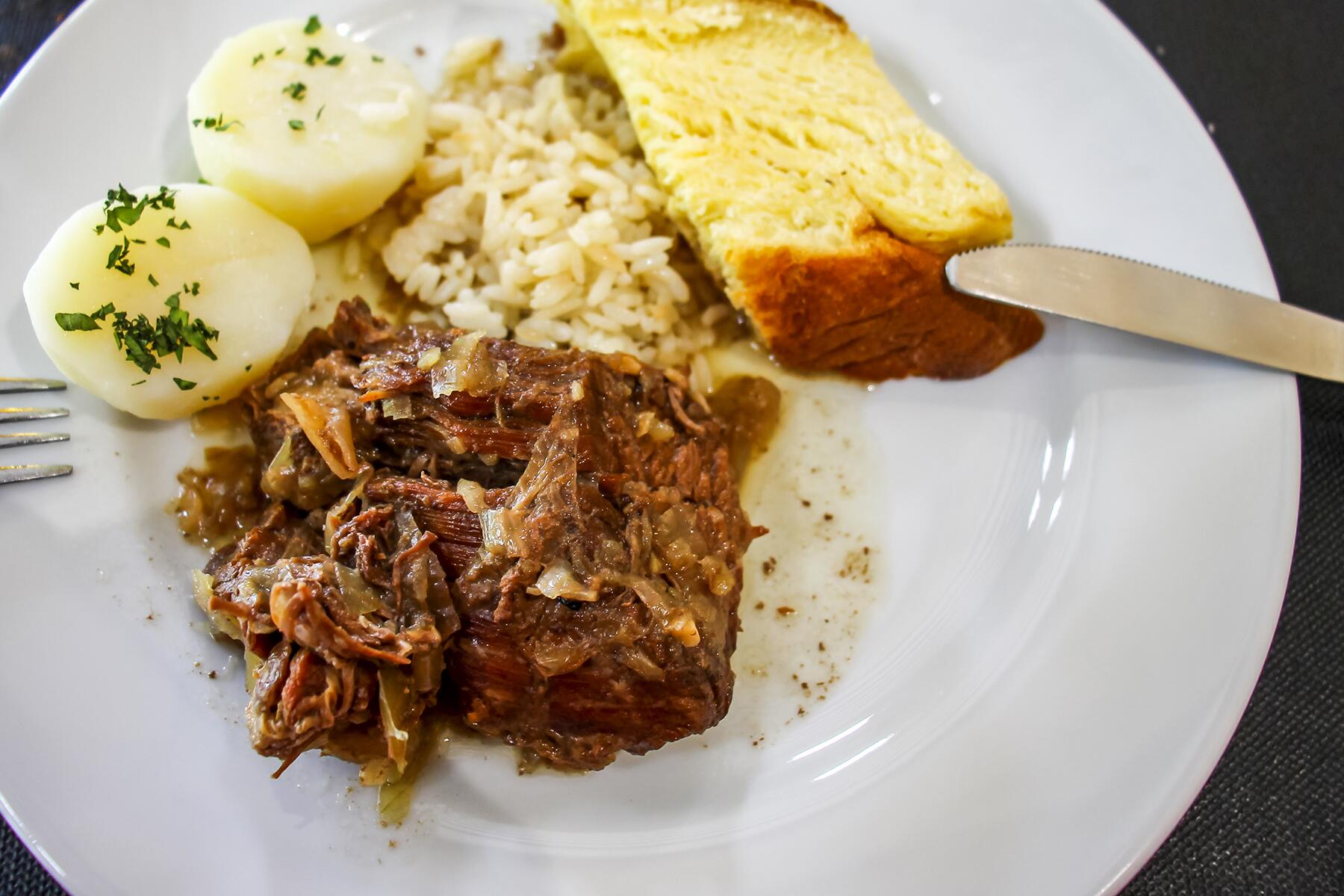 This wine-based pot roast is the signature dish of the island of Terceira. The name comes from the word alcatre which means “rump,” hinting at the type of cut that is commonly used in the dish. It is traditionally made in a clay pot that is used over and over—the more it’s used, the more flavor the next one will have. The beef is slowly cooked with pork fat or bacon, onion, garlic, red wine, and spices until the meat is tender and the broth is infused with flavor. Alcatra is typically eatenwith a lightly sweet bread that is used to soak up the broth. To try this dish in Terceira, head to Ti Choa in Serreta or Restaurante O Chico in Angra do Heroismo. 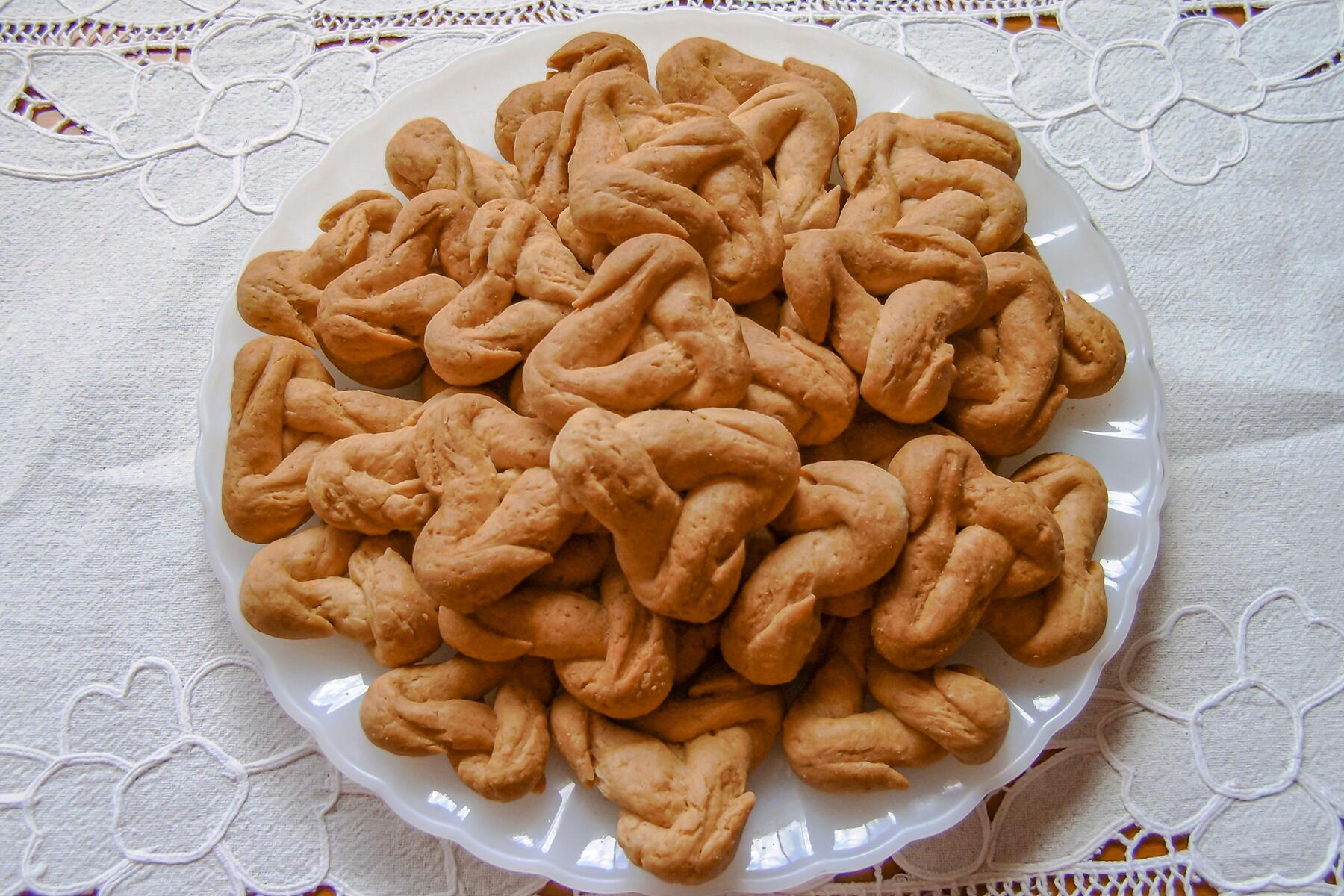 Named for their ear-like shape, these cookies from Santa Maria island are similar to sugar cookies. The cookies are a constant presence in Mariense homes on religious holidays and weddings. On Christmas and the Festival of the Holy Spirit, the cookies are given by godfathers to their godchildren. While they are usually made for special occasions, you can purchase the cookies made by the island’s artisanal cooperative at many markets and snack bars in the area. 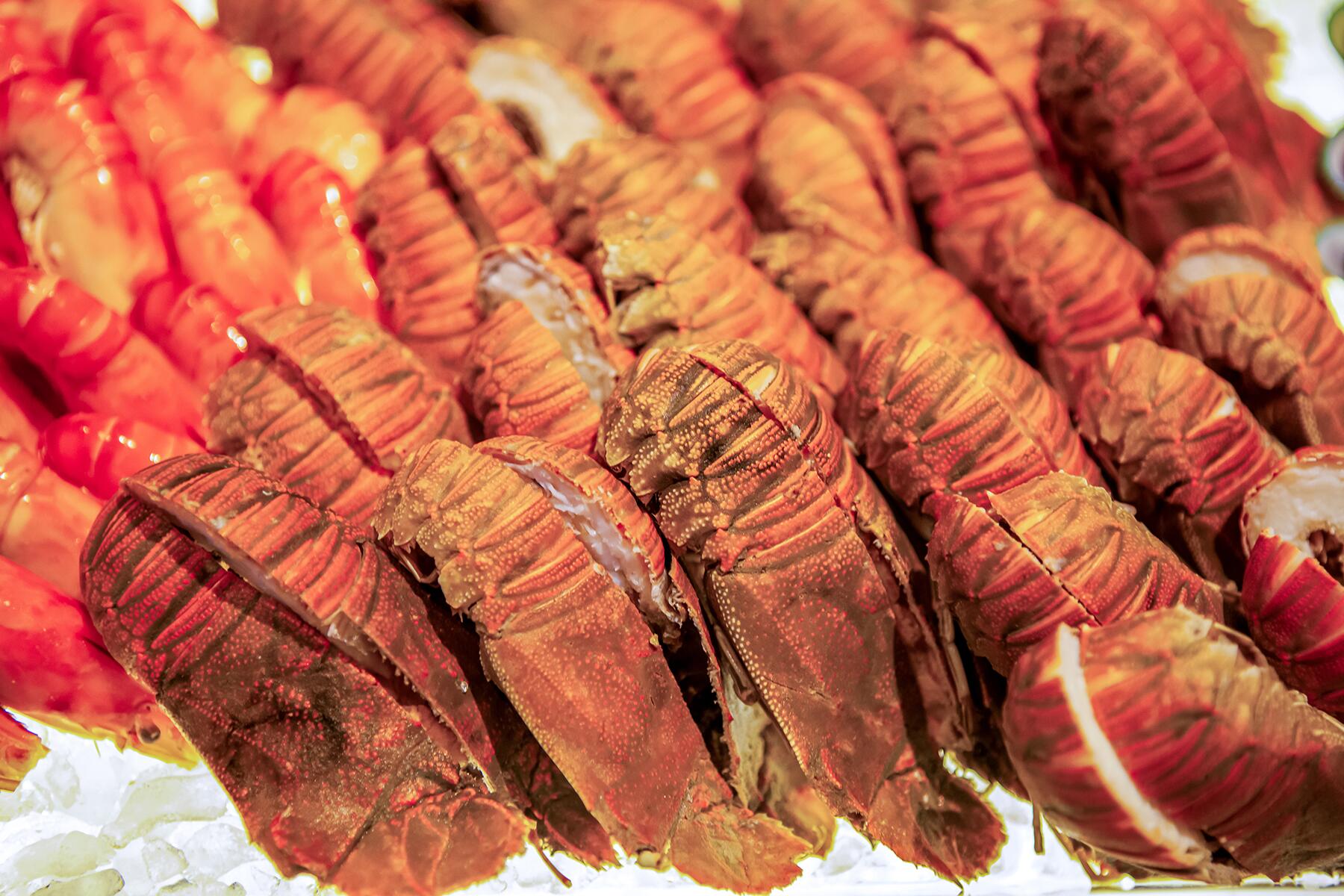 Cavaco is a type of local slipper lobster (also sometimes called locust lobster) known for its tender meat. They’re easier to find in the summer but otherwise elusive and locals sometimes order their lobsters at popular restaurants ahead of time. Those fortunate enough to encounter them should certainly taste them. When in season, try them at Beira Mar or Quebra Mar in Terceira’s fishing village of São Mateus, or at Cais 20 on São Miguel. 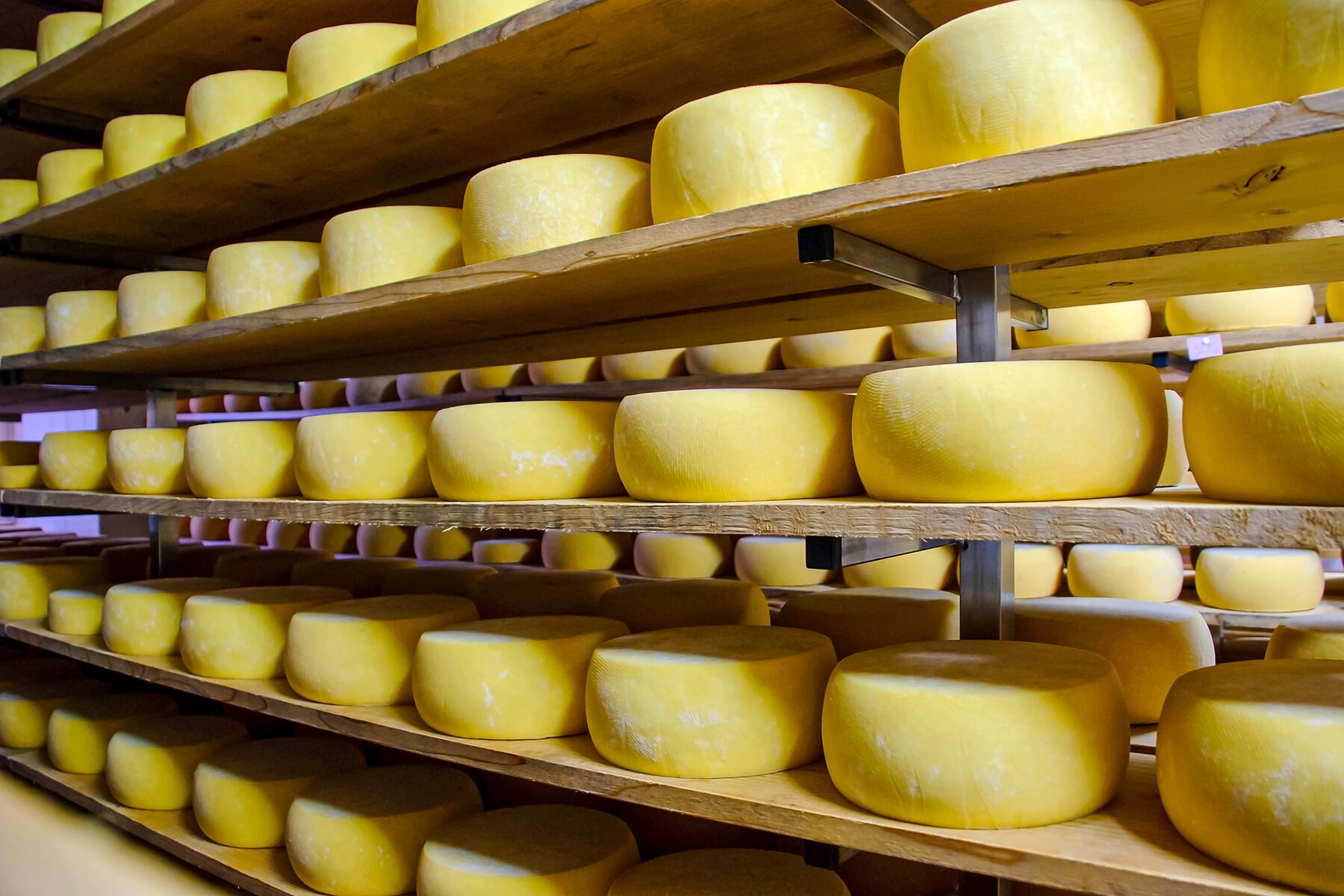 While fresh cheeses are common across the islands (and well worth trying, with a tofu-like texture), São Jorge, in particular, is known for aged cheeses. The cheeses have even obtained PDO (“Protected Designation Origin”), which identifies them as products with a strong link to the region and special characteristics that come from a specific geographical environment, much like the concept of wine “terroir”. The island was settled by the Flemish in the 15th century, who brought cheese-making to the island. São Jorge cheeses are commonly aged from three months to a year, which turns the cheeses tangy and salty–sometimes even spicy. Though the cheeses are sold throughout the islands, if you visit São Jorge, you can find cheeses aged up to three years. There are three working cheese factories on São Jorge, but Uniqueijo, which is composed of eight cooperatives, is a good option as they offer factory tours on Tuesdays and Thursdays (or by appointment). 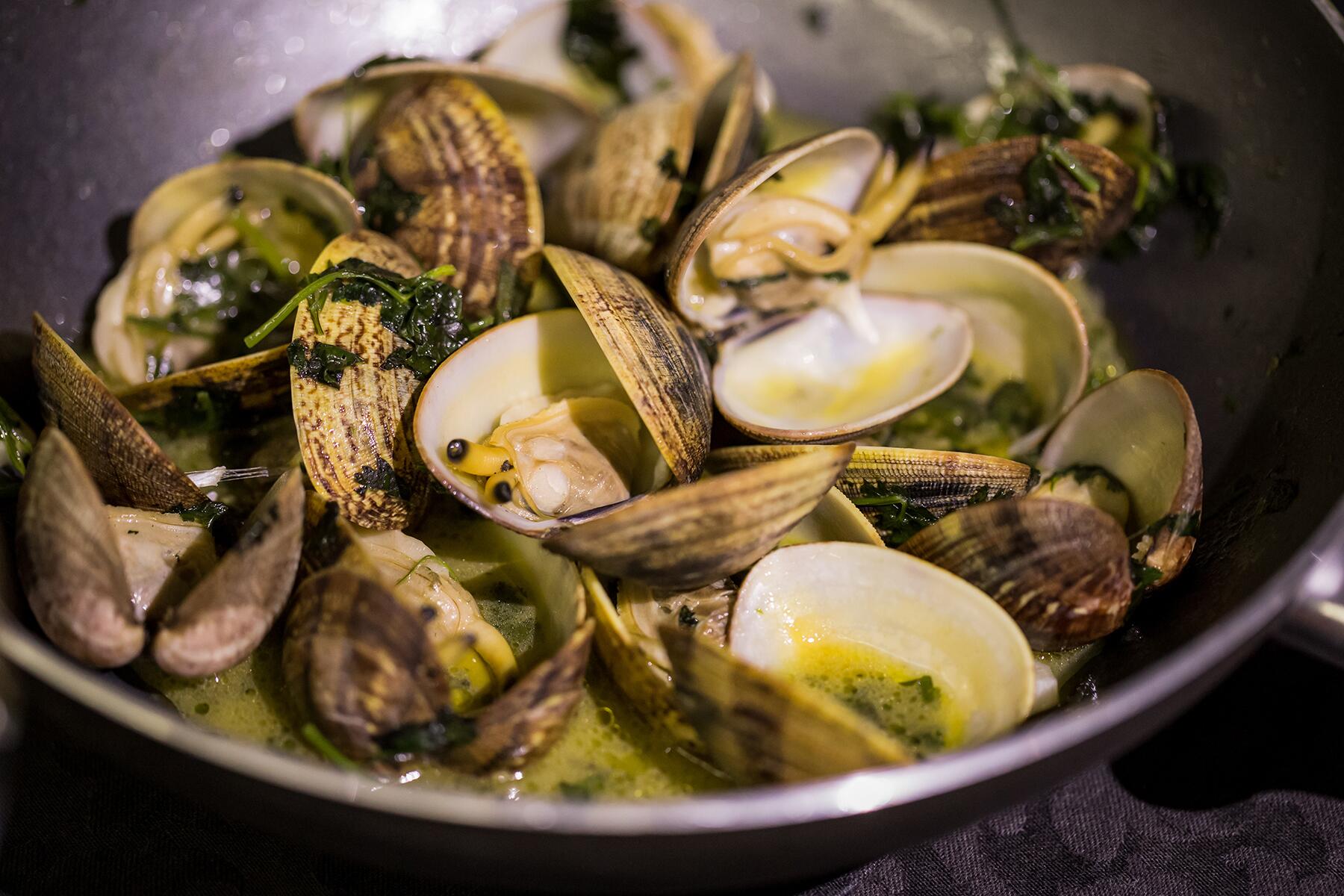 São Jorge is the only Azorean island where you can find clams, and the only place they breed is in the lagoon of Faja de Santo Cristo. Legend has it a Canadian man placed some clams in the lagoon and the condition happened to be great for breeding clams. There are restaurants around the island that serve them, including Restaurante Fornos de Lava, but the one closest to the source is O Borges. The clams are only available from mid-August to mid-May, as clam harvesting is prohibited beyond this window. 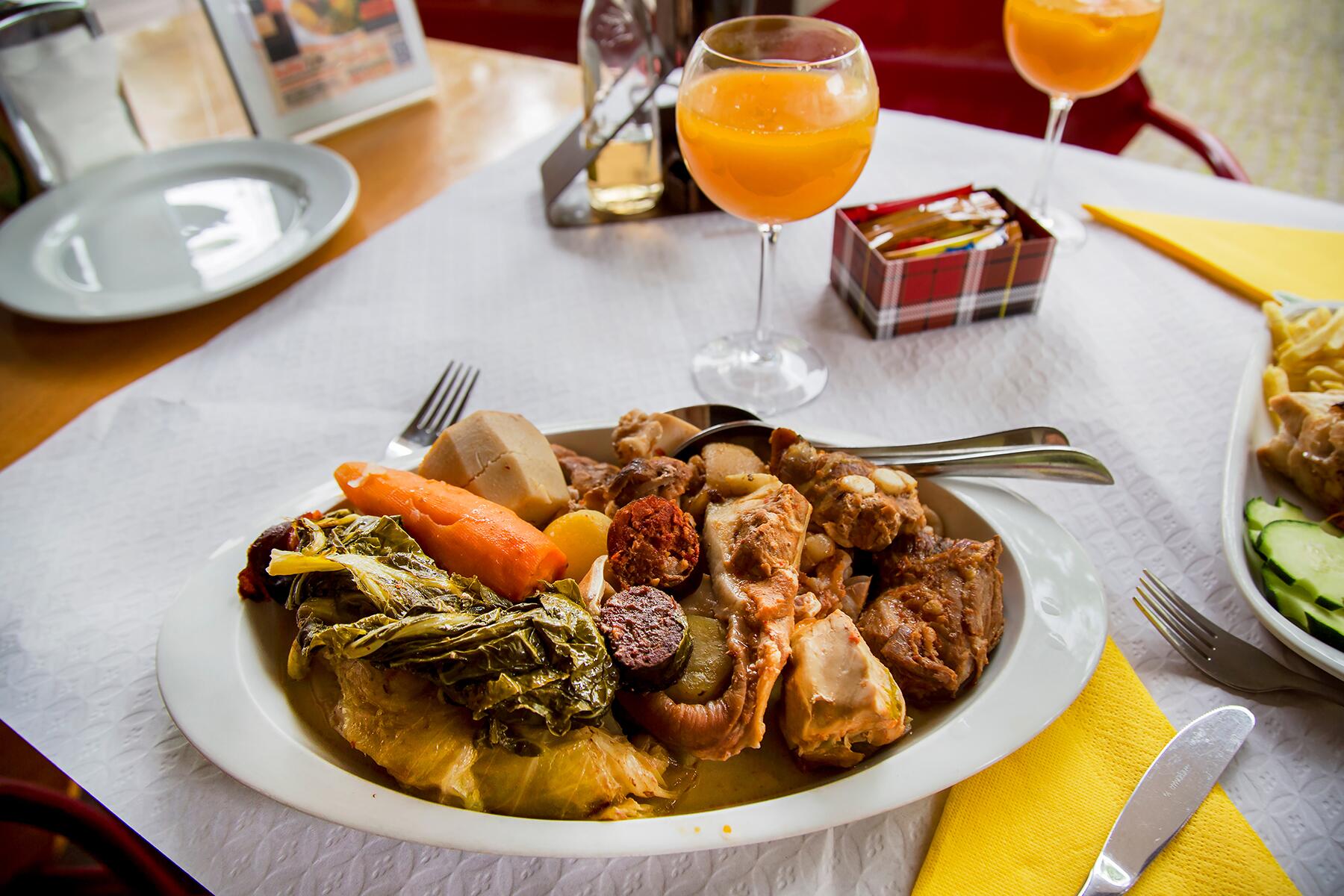 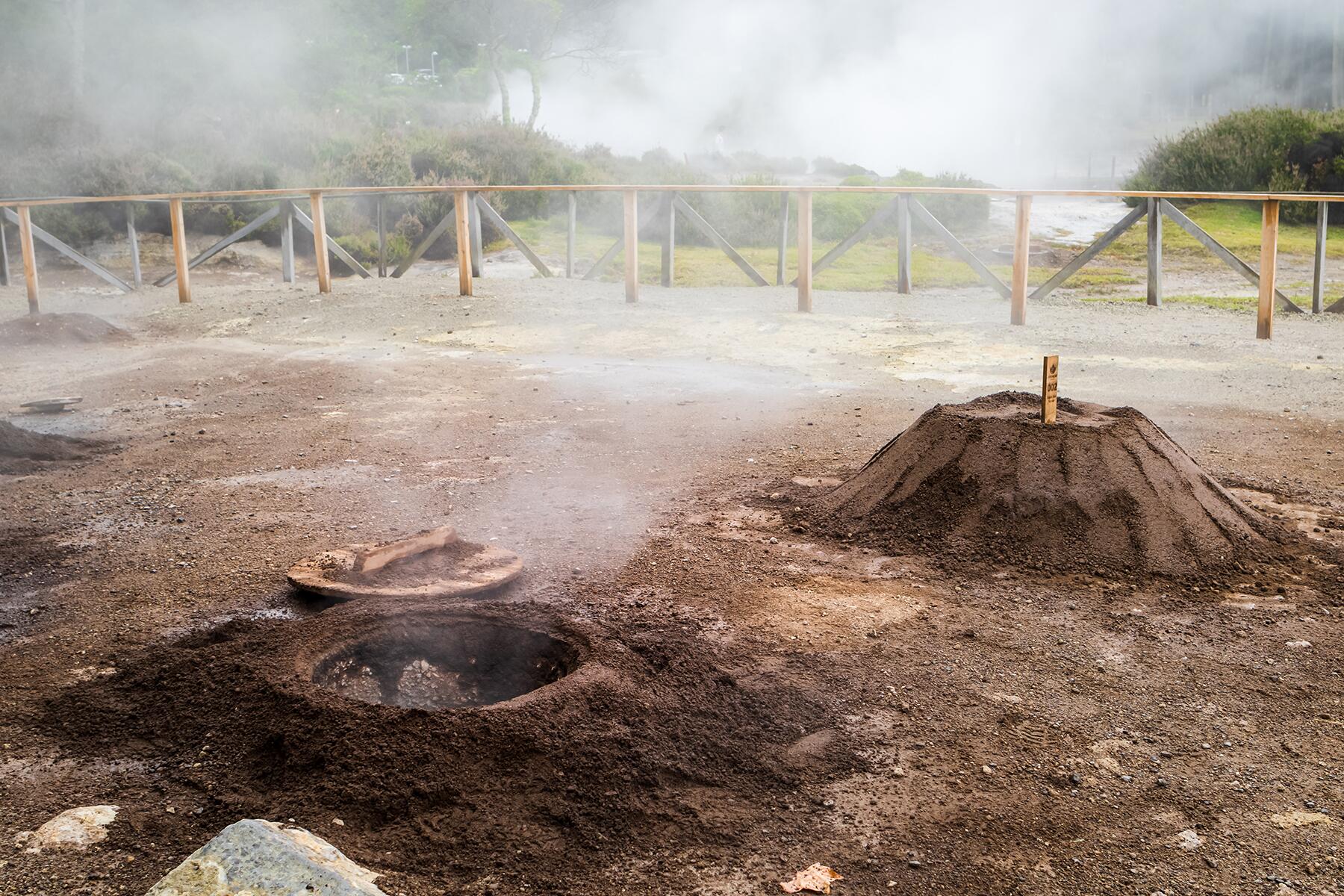 PHOTO: Kaca Skokanova/Shutterstock
Previous Next
6 OF 12

Stews are prevalent in Portuguese cuisine, but the cozido das Furnas from São Miguel island is unique in its preparation. The stew originates from the town of Furnas, famous for its fumaroles and hot springs. It is this landscape that defines cozido das Furnas. The pot of stew is placed in a hole in the ground, where it is slowly cooked by volcanic heat. More restaurants now showcase the cooking process to guests after Anthony Bourdain did so in his No Reservations episode on The Azores. Head to Lago das Furnas around 12:30 pm to see the restaurants dig out their pots of stew and then taste them at Terra Nostra Garden or Caldeiras e Vulcões. 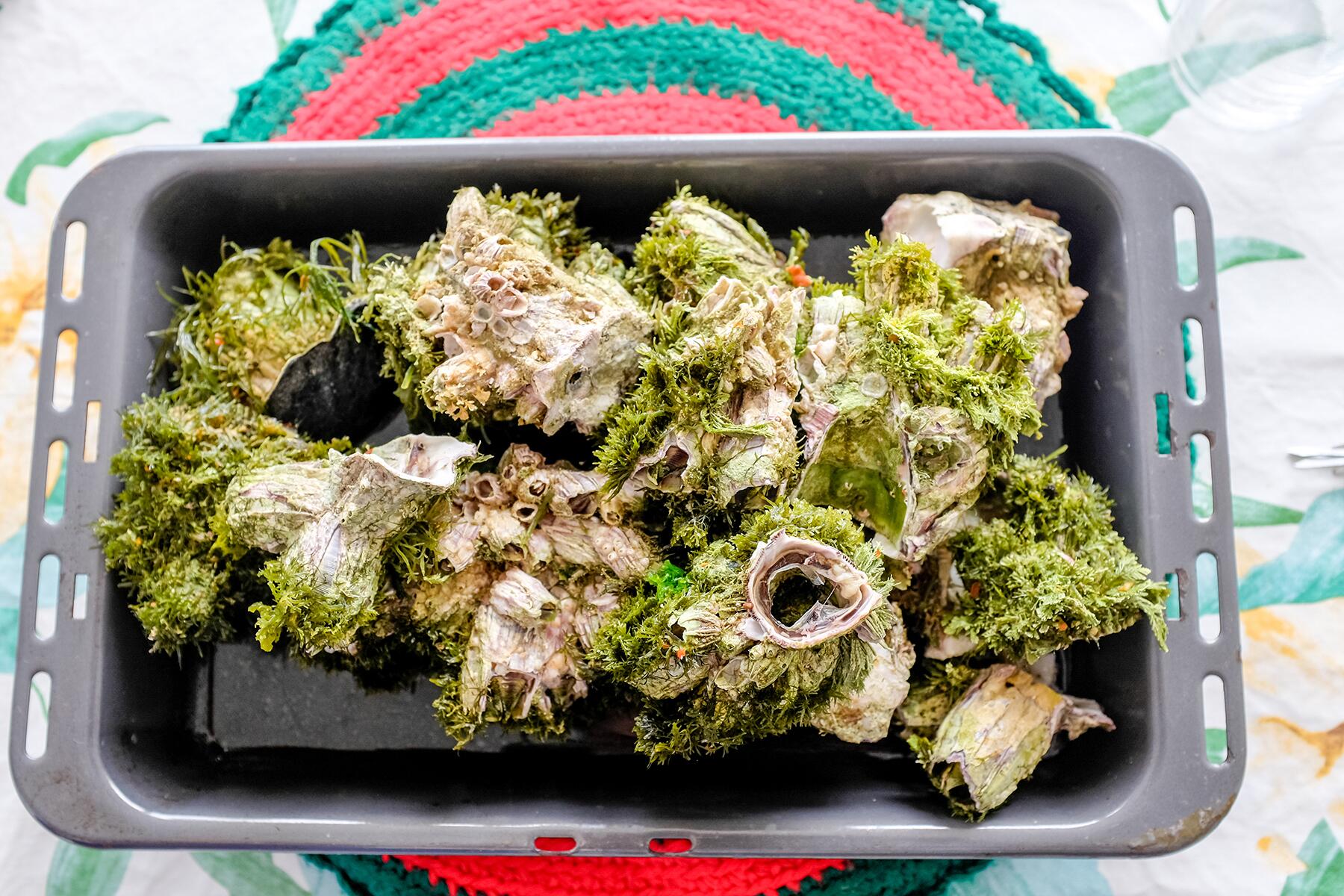 Cracas is a type of barnacle that is unique to the waters around the Azorean islands. They’re typically steamed in  seawater then cooled down before serving. A small metal hook is used to dig out the meat and the briny seawater is slurped from the crevices afterward, as you would slurp an oyster. Unlike gooseneck barnacles, cracas meat is more reminiscent of crab. They can be found at many restaurants in the archipelago, including Cais de Angra right at the marina in Angra do Heroismo. 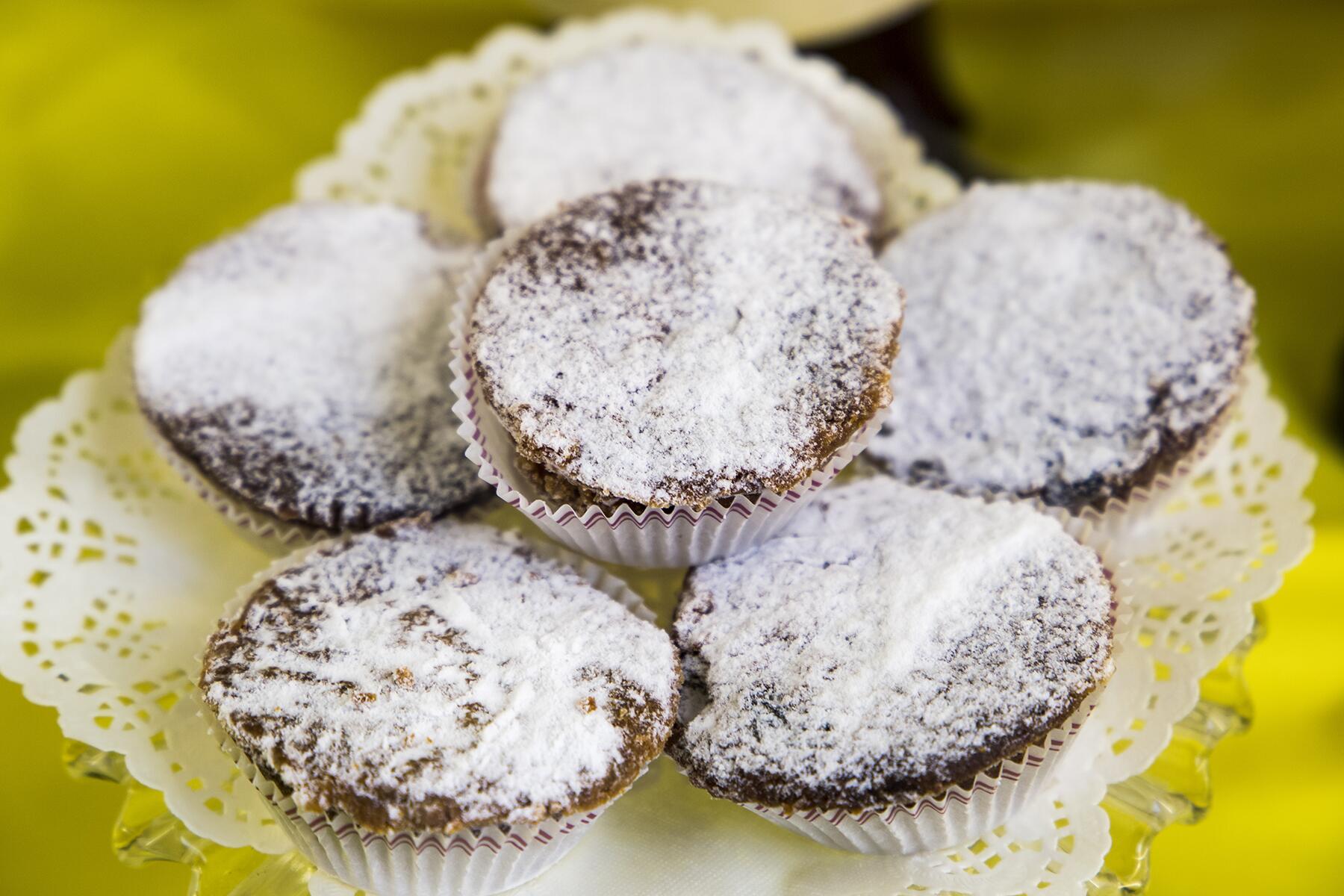 This spiced cake is a specialty from Terceira Island and was first created to celebrate Queen Amelia’s visit to the island in 1901. Made primarily of cornflower, molasses, raisins, and cinnamon, the queen had enjoyed it so much that the cake now bears her name. Dona Amelia can be found all over the island at most bakeries and restaurants, although they may differ in shape and density. Try a slice of the less dense version at the bar at Hotel do Caracol or bring home a box of individual-sized cakes from the popular O Forno Bakery. 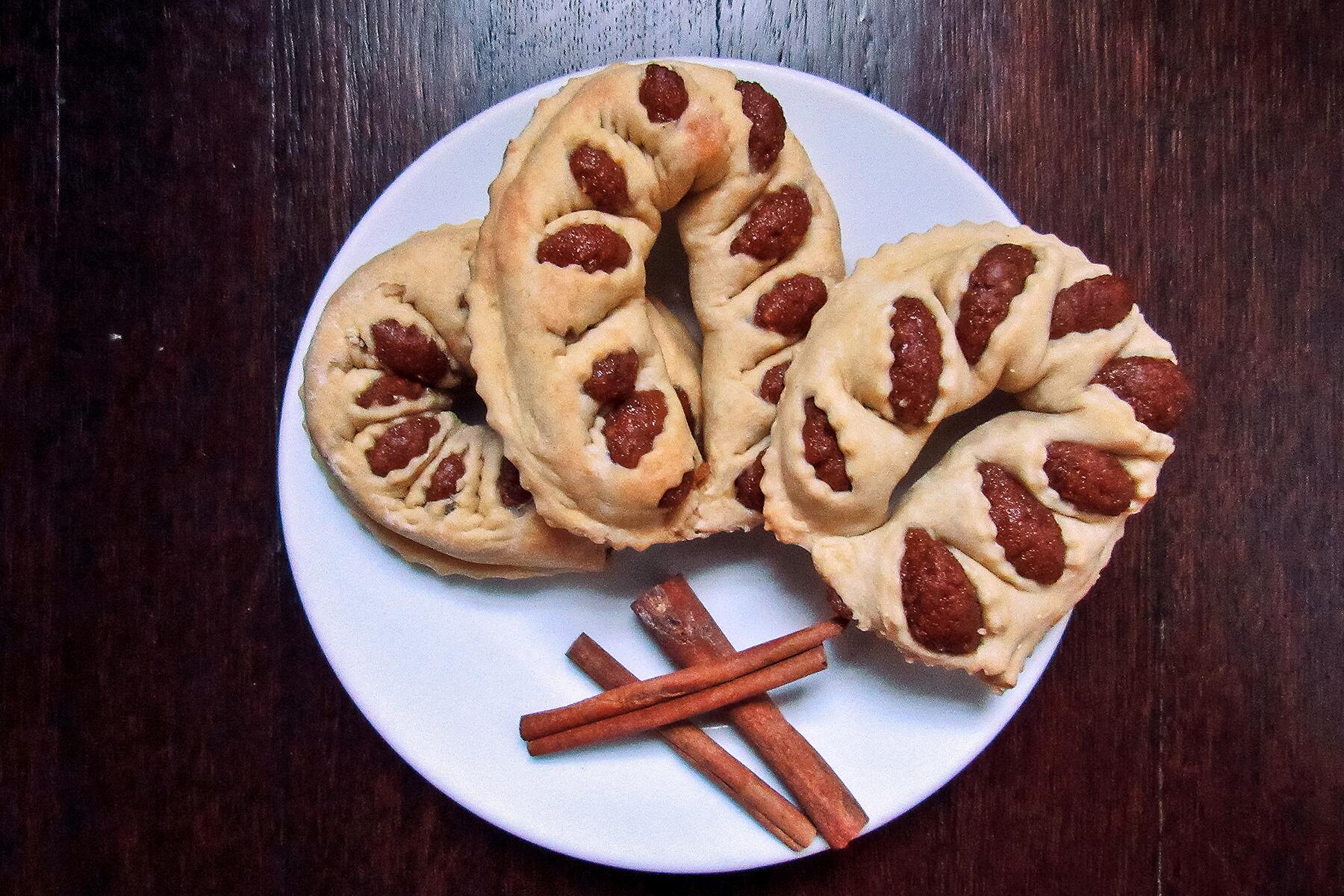 PHOTO: Desiree Borba of The Five Marias
9 OF 12

The espécies is a small ring-shaped cookie from the island of São Jorge. The name came from the abundance of spices used to make the cookie. The filling is made of bread that is roasted, then ground and mixed with spices such as anise and fennel. It is then covered with dough that is made into a ring shape, and slits are made across the dough wrapping to reveal the brown filling inside. They can be purchased at various bakeries and snack bars on São Jorge, including Dulcores. 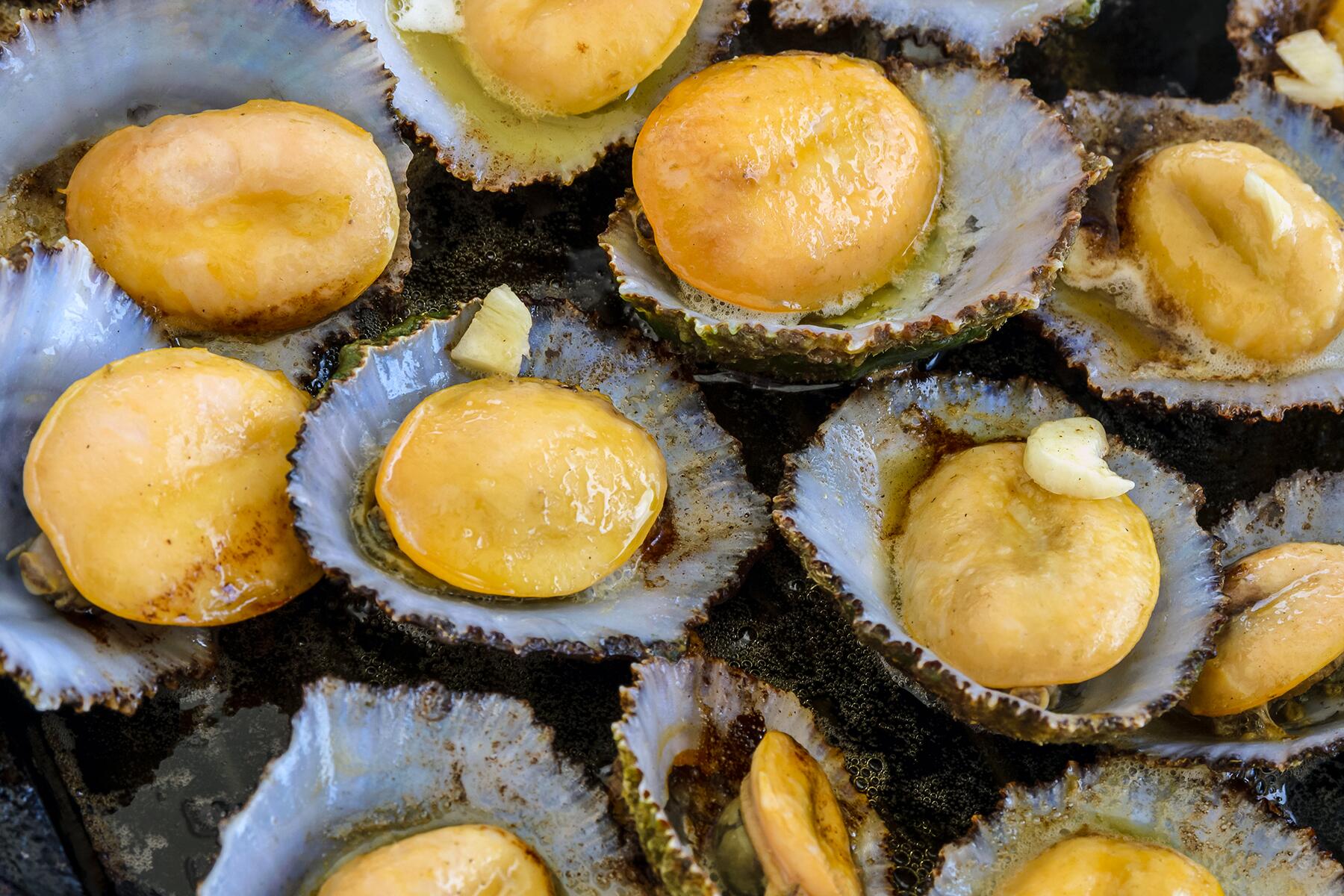 Limpets, or lapas in Portuguese, are a type of sea snails that are very popular in the Azores, and for good reason. Lapas are similar to mussels (but with a meatier texture) and delicious when grilled with garlic. Grilled lapas are served with a slice of lemon on a sizzling platter, but on Pico and São Jorge, you may find them raw and alive. On Terceira, the best places to try lapas are Beira Mar and Quebra Mar (the two are run by the same people). Or, you can enjoy them with a view of the ocean at Mare Viva on São Jorge. Note that the limpets are widely available in the summer months and harder to come by in other seasons. 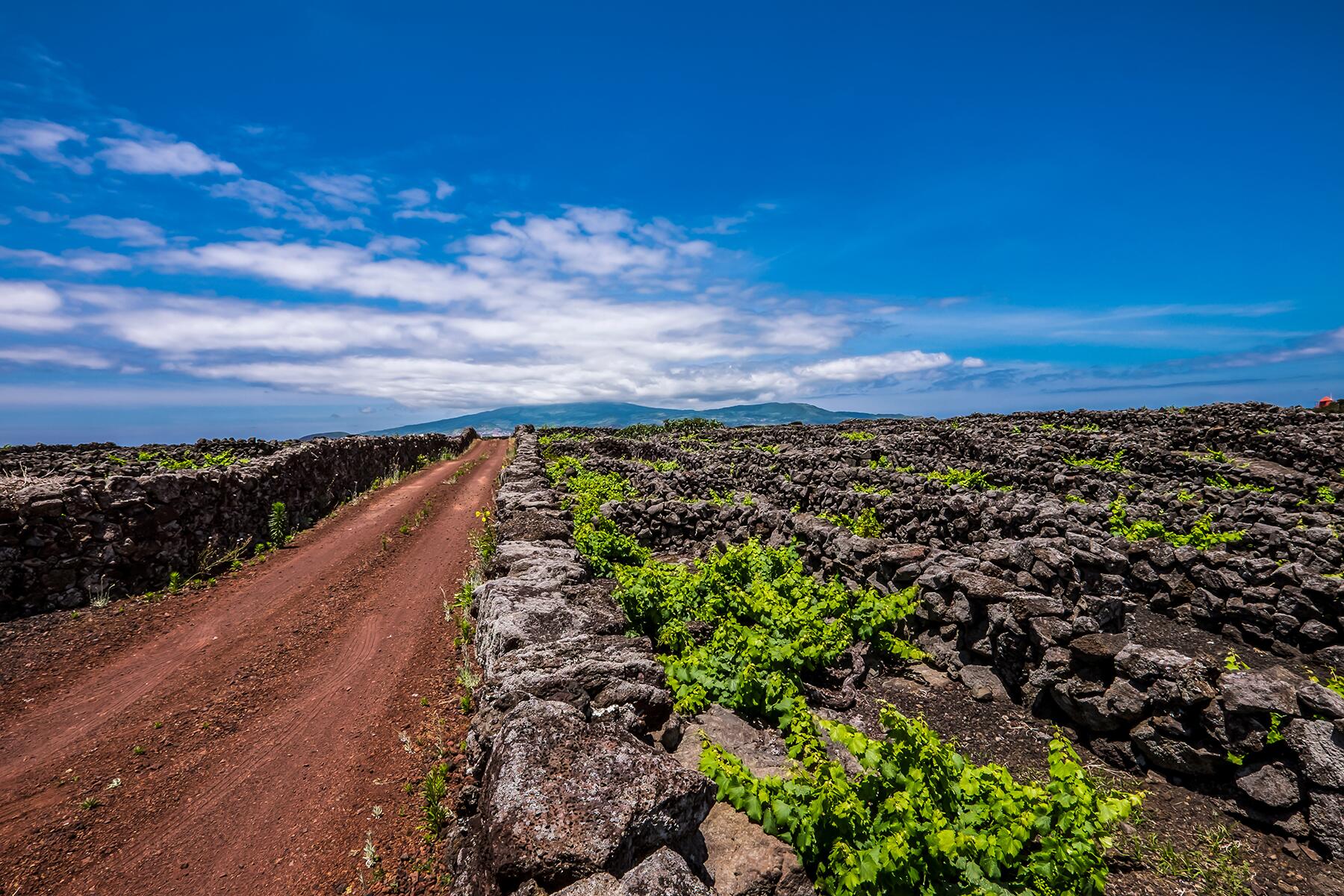 Winemaking has been a surprisingly long tradition in the Azores, thanks to the Franciscan friars who brought it there in the 15th century. The grapes are grown in small plots called currais, which are surrounded by rock walls that are needed to block the strong winds. The Azores is primarily known for their white wines, including the Verdelhos. Seek out the Arinto dos Acores, a varietal that is unique to the islands. It shares the same name and similar acidity as the Arinto grapes from mainland Portugal, but the two are not related. Arinto dos Acores wines are made by Azores Wine Company on Pico island. The island is the one best known for its wines, thanks to its volcanic basalt soil. Pico Wines, the island’s cooperative, is also a great place for a wine tasting. Of course, enjoying local wines while soaking up live fado music at local tabernas such as Taberna do Fado on Terceira is a great way to spend an evening. 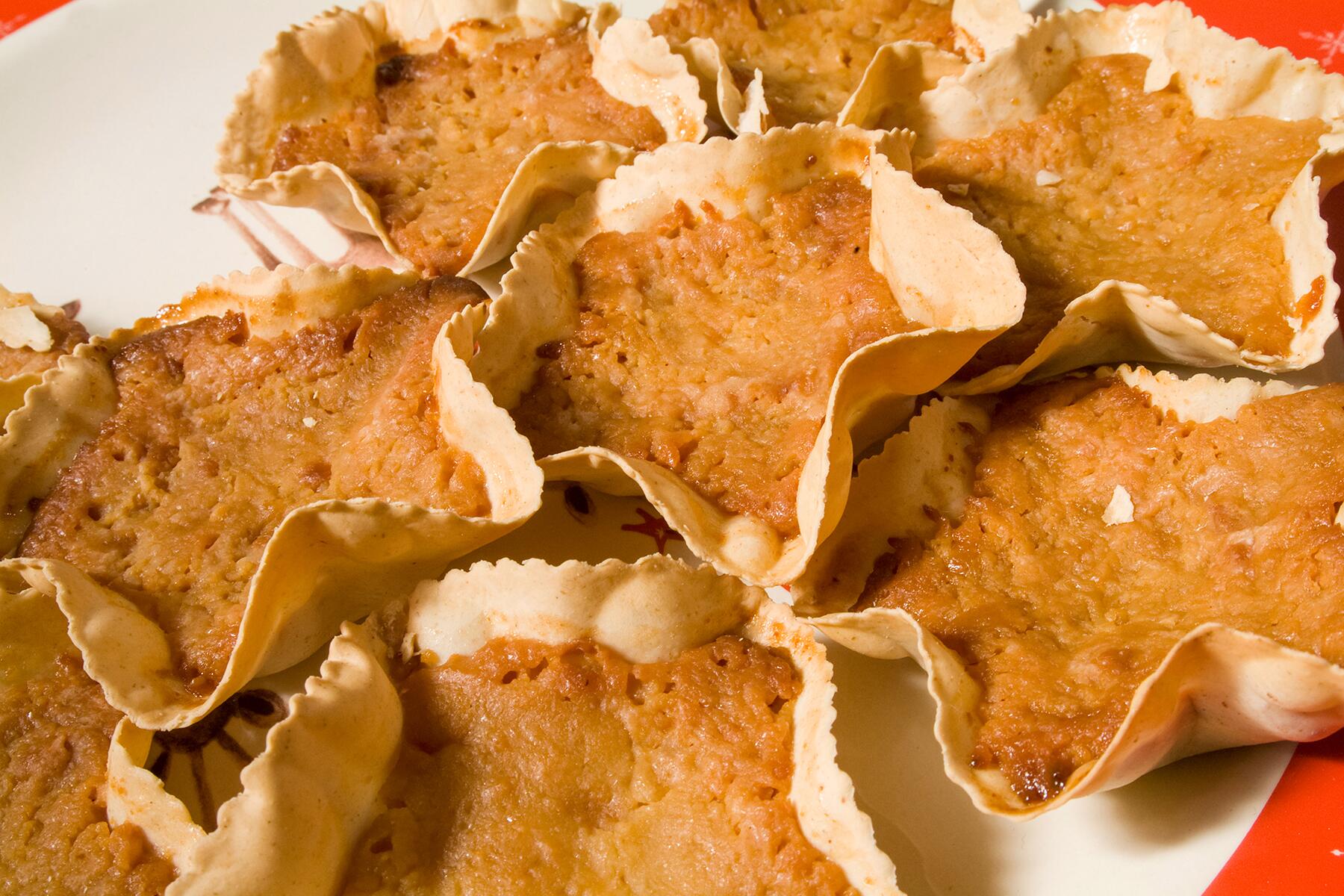 Queijadas are a popular Portuguese pastry, but the island of Graciosa has their own unique version that was created by Maria de Jesus Santos Bettencourt Félix half a century ago. While the name suggests “cheesecake”, there’s no actual cheese in the crunchy pastry’s filling, which consists of eggs, milk, sugar, butter, and a touch of cinnamon. They are now made by a company run by Maria’s children using 100% Azorean ingredients. The pastries are handcrafted on Graciosa, but they are also sold at several stores on other islands that focus on Azorean products, such as Quinta dos Acores in Terceira.