Oslo’s vibrant and eclectic street art scene is its most under-the-radar attraction. Here’s how you can get in on the action.

Once outlawed and stigmatized, street art has become more than welcome in Oslo over the last decade, turning the city into a blossoming outdoor gallery sprinkled with both local and international works of art. A self-guided street art tour something to do in Oslo that’s sure to please your cultural curiosity and help you snag some Instagrammable pictures. Street art isn’t hard to find here; spending a day connecting the dots between different works of art can help you get a feel for the city’s pulse as you navigate through its distinctly different neighborhoods. Throw in some stops for food and drinks along the way and you’ve got yourself the makings of a beautiful day in Norway’s capital. 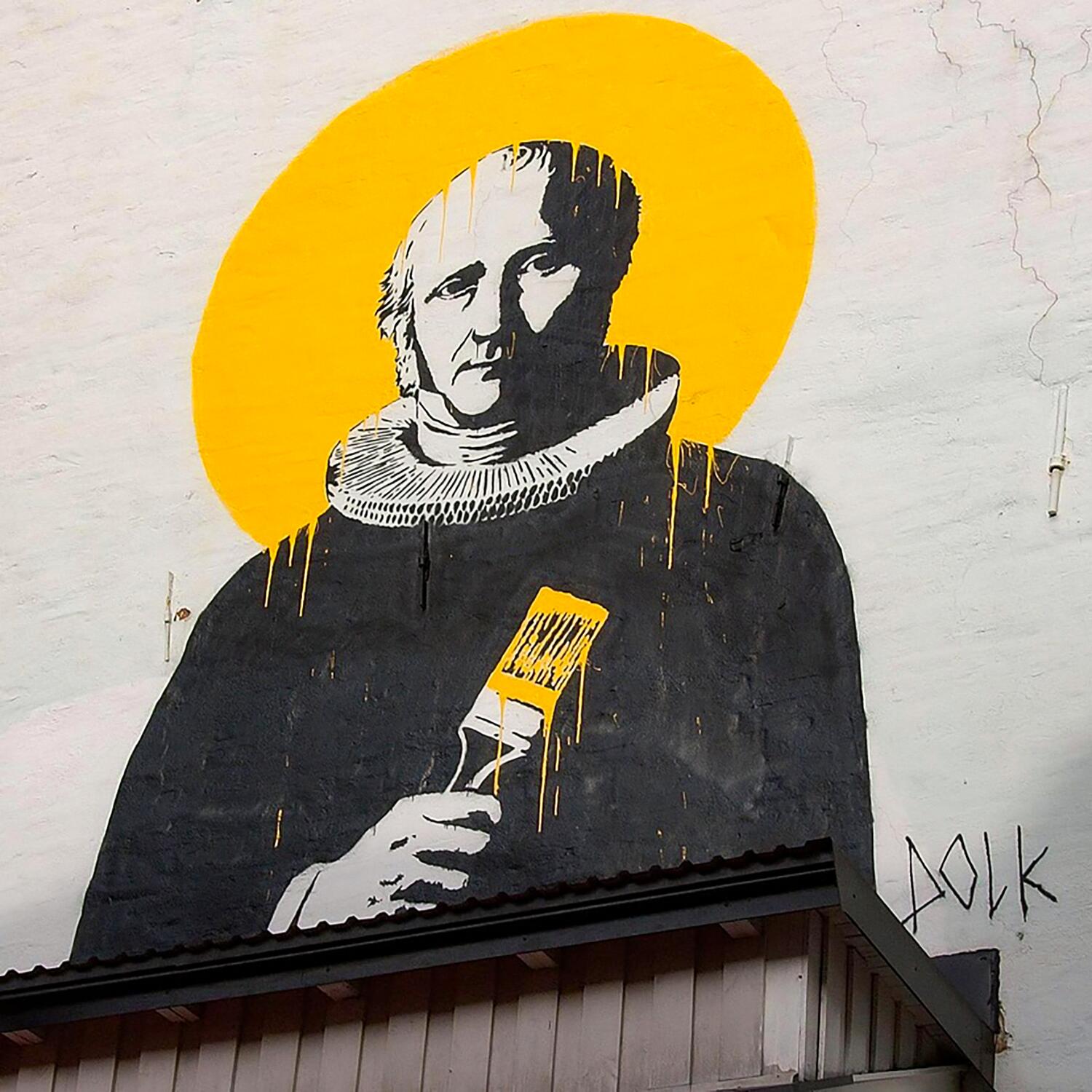 One of Norway’s most recognizable street artists, Dolk, hails from Bergen, about 460 km west of Oslo. He is world-renowned for his politicized stencils, which draw inspiration from famed British artist Banksy. Dolk worked anonymously for almost 15 years until revealing himself in an Instagram post in December 2018. Though much of his artwork could once be found in Oslo, at the moment only Priest remains. 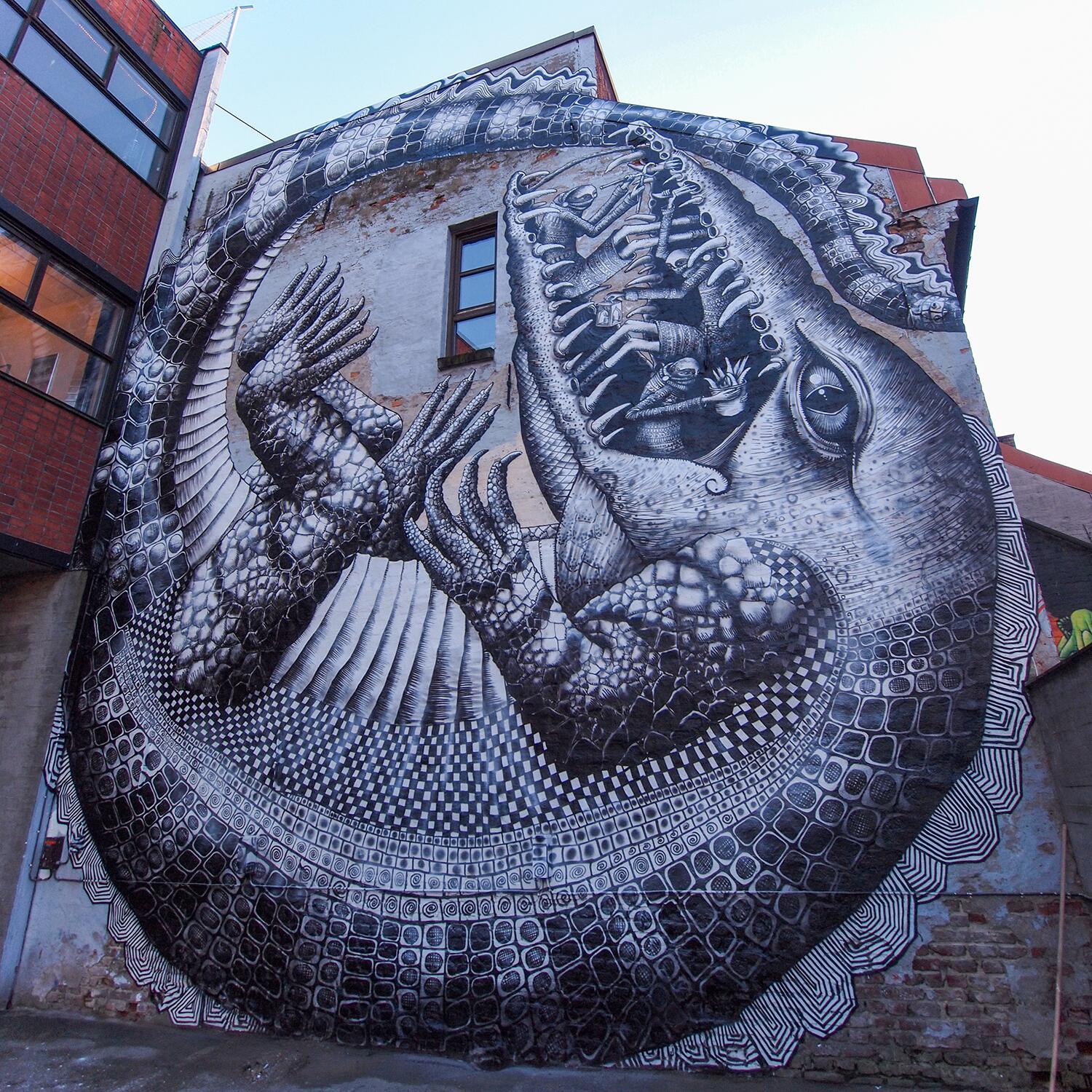 Hailing from the United Kingdom, Phlegm brings a distinctly illustrative and comic book sensibility to his street art. Look closely at the teeth of this giant crocodile, which engulfs the entire wall it’s painted on, and you’ll see Phlegm’s signature comic characters trying their hand at reptilian dentistry.

INSIDER TIPIf you visit on a Sunday, be sure to stroll down nearby Ingensgate any time from 12:00 pm to 5:00 pm for the local flea market where you can find a variety of jewelry, artwork, and clothes. During the Christmas season, the flea market transforms into a holiday market! 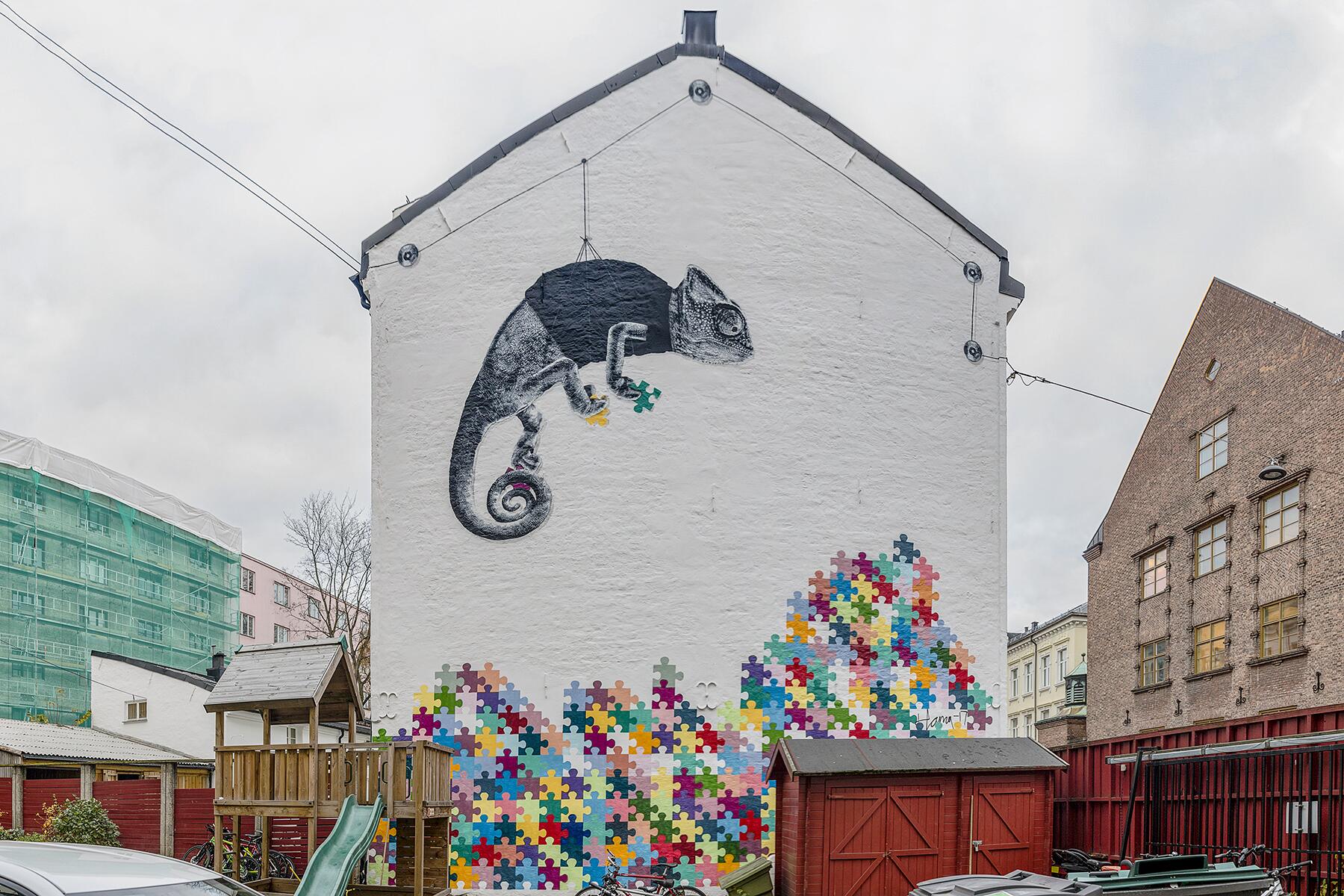 Oslo-based stencil artist HaMa focuses primarily on communicating the ways humans interact with nature. Her artwork heavily emphasizes themes of overconsumption and how humanity’s quest for more impacts the environment. For example, this 2017 mural painted for Nuart RAD, a five-year plan implemented by the city of Oslo to enhance the area along the Akerselva River with street art reflecting each of the four distinct neighborhoods on its banks. 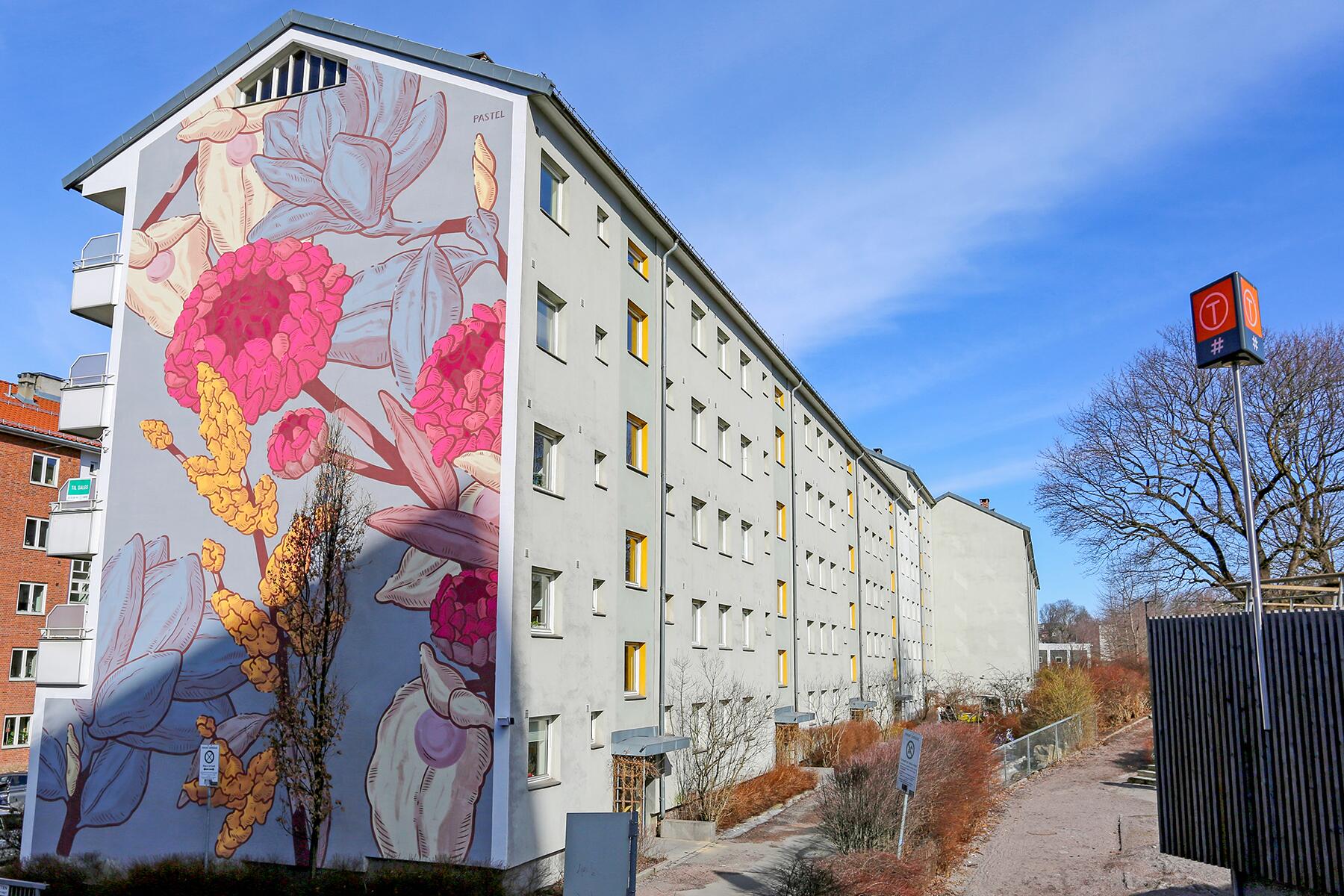 Strategically painted beside the Toyen Botanical Garden, this work of art by Argentinian street artist Pastel depicts the garden’s fauna which Pastel describes as being from all over the world and “adapted to survive in this garden.” At the time Pastel painted the work he named it after then 54-year-old Romanian immigrant Nelu, who Pastel claims lived next to the wall, drawing a similarity between Nelu’s journey and those of the neighboring plants.

INSIDER TIPTake a stroll through the Toyen Botanical Garden before or after viewing this piece, which houses approximately 1,800 different plants 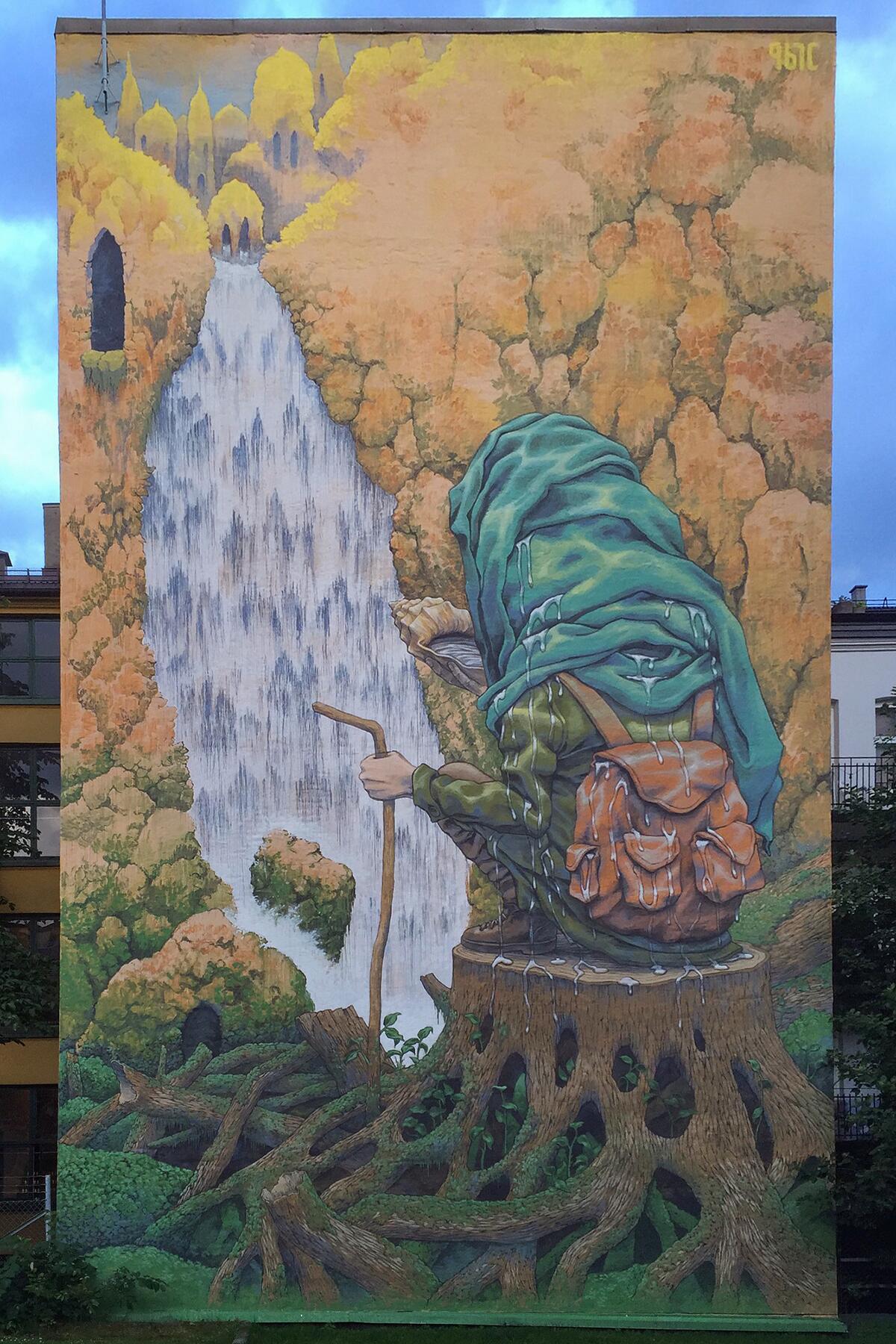 Russian-born Rustam Qbic originally worked in graffiti and illustrations before falling in love with classical painting. His marriage of the disciplines is evident in his 2016 piece Water of Life where he focused on surrealism and storytelling through the character and scene he depicts. Look for the close detailing of the water coming off the character’s clothing. 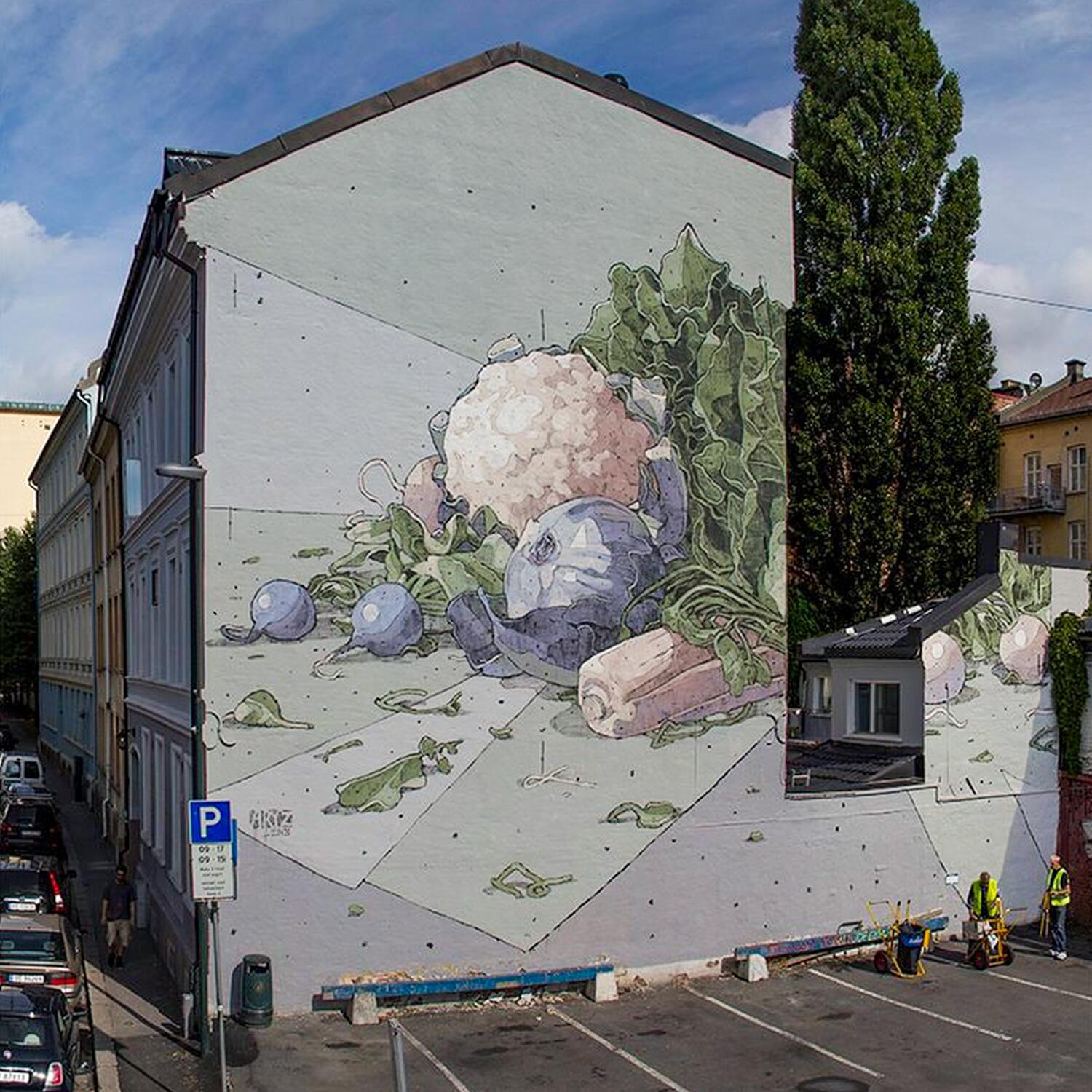 Spanish street artist Aryz has a distinct style of muted colors which are concocted by using a combination of spray paint with paint rollers which he stays true to in this 2013 depiction of vegetables that almost blends into the surrounding trees if you visit on a summer day. For fans of his work, there’s an additional piece nearby at Schubeler Gate 11 that depicts a young girl sitting in the lap of a fatherly figure. 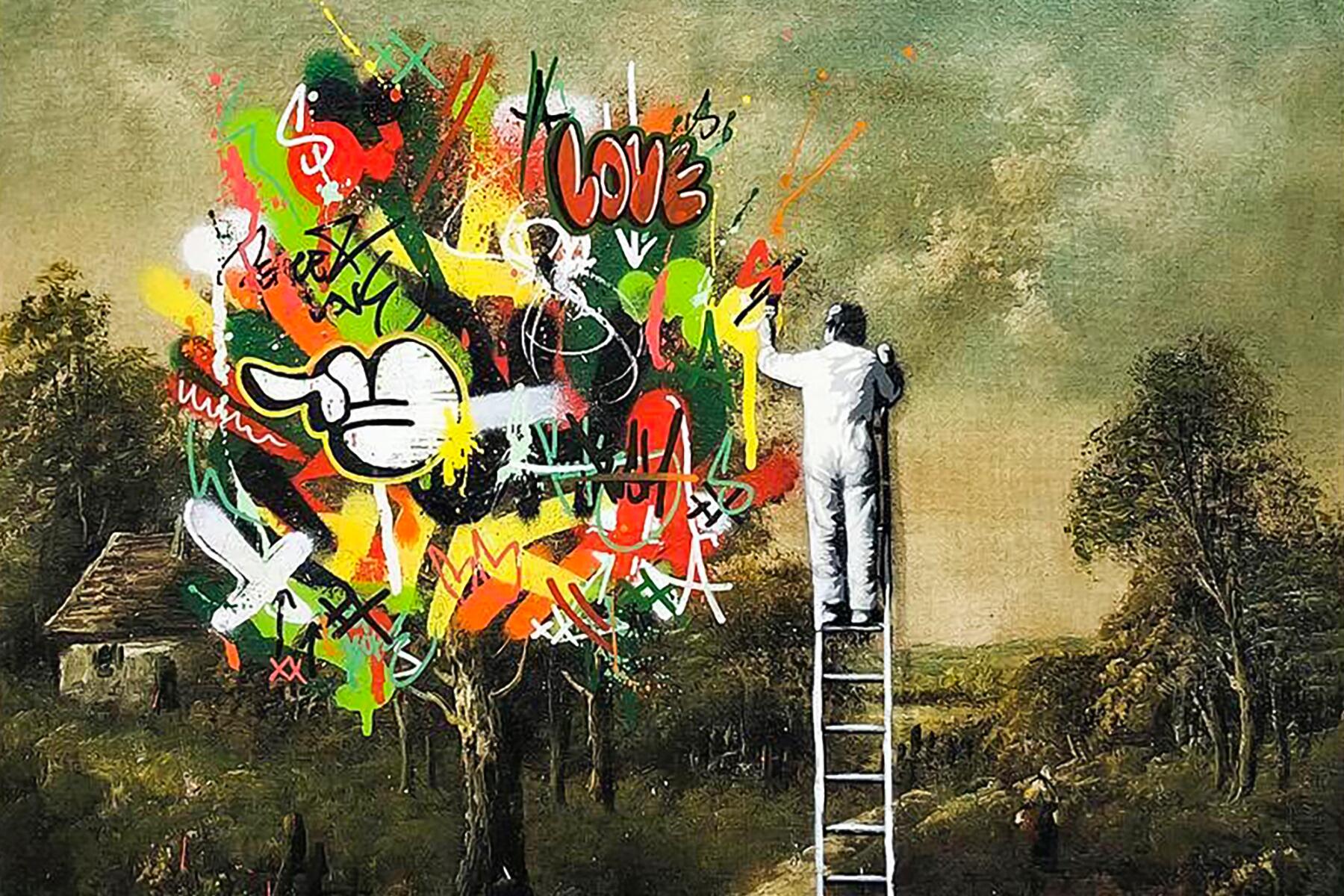 Another notable Norwegian stencil artist, Martin Whatson grew up in Oslo and was actively engaged in the city’s growing graffiti’s scene during his childhood in the 1990s. He found inspiration from the manner in which different generations interacted with the urban landscape. His 2015 piece, High Up, is emblematic of the way he combines grayscale and color splashes to show the delicate balance between strength and vulnerability. 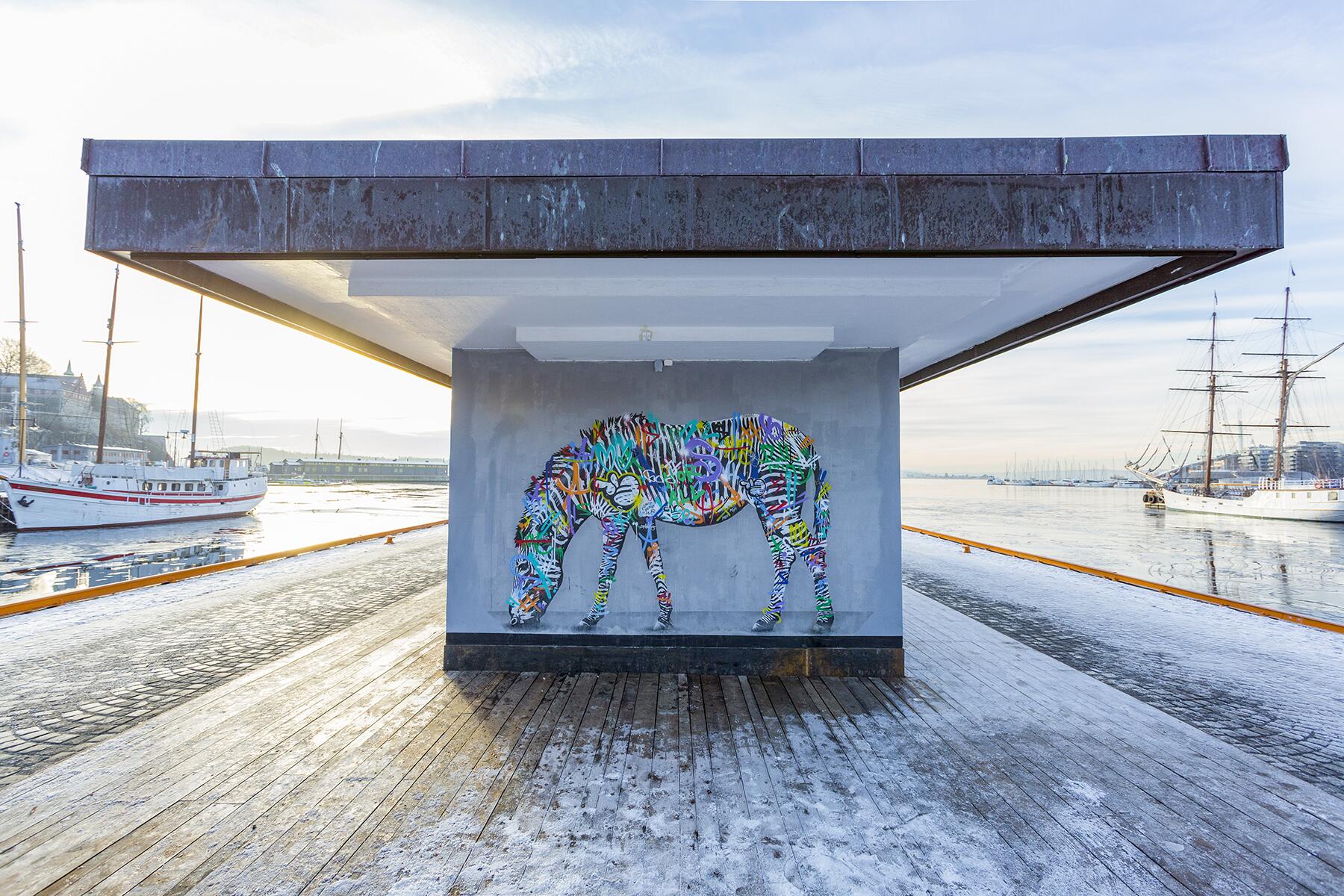 This 2015 piece by Oslo’s own Martin Whatson is heavily stylized, incorporating both stenciled grayscale and colorful graffiti. Contextually, the piece is set against the backdrop of the waters of Pipervika, the bay that separates Oslo’s commercial Aker Brygge neighborhood from its mighty fortress.

INSIDER TIPSince the bay opens southward, come in the early evening to watch the sun set over its waters and get a natural, soft backlight for a picture of the piece. 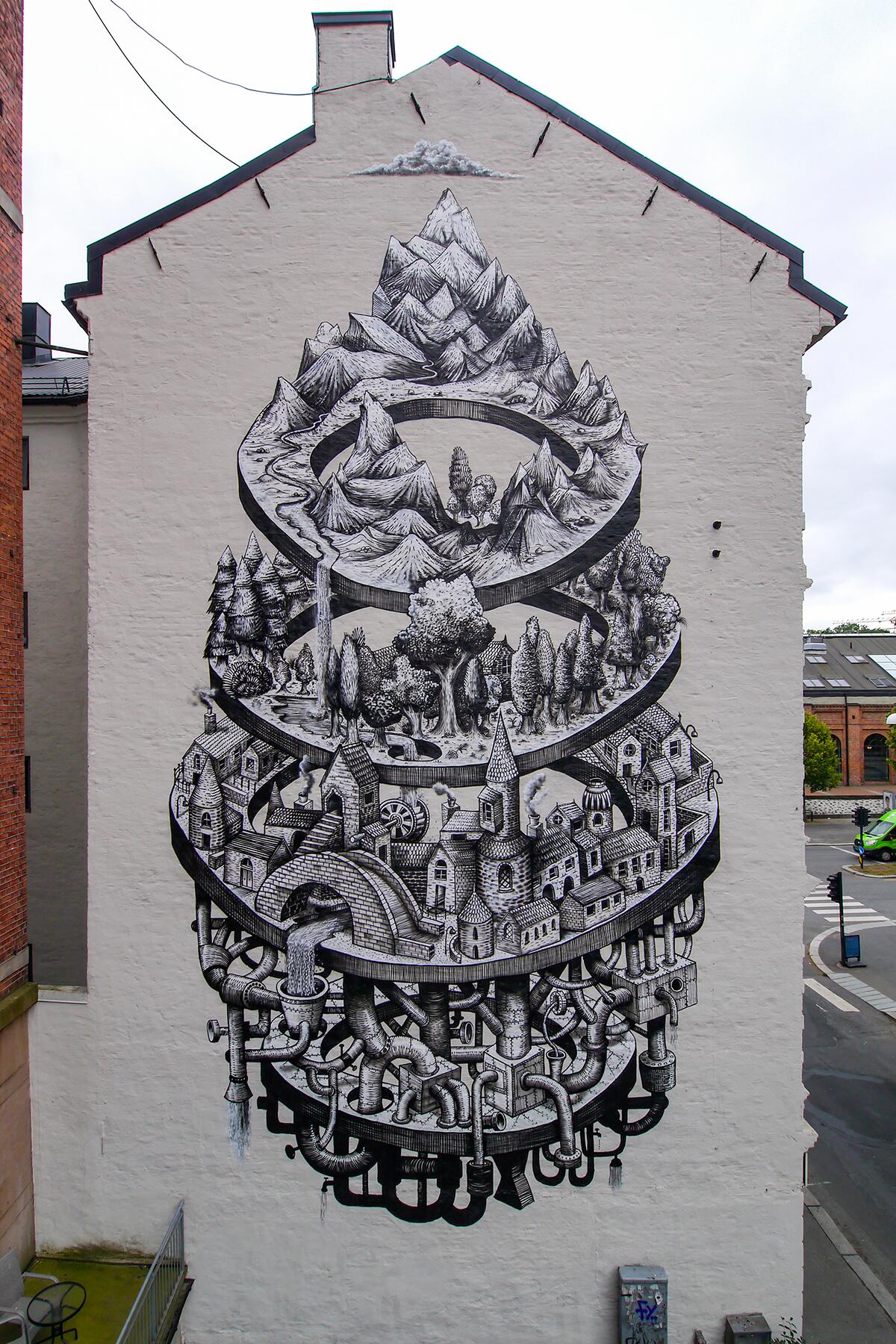 This 2017 piece by the United Kingdom’s Phlegm is definitely off-the-beaten-tourist path, situated near several schools and the Norwegian Doctors Without Borders office. It depicts the entire layout of fantastical city, from the  skies above itto the gritty sewers below its streets. Make sure you’re not in a rush when you arrive at this piece because the detail can be captivating to view in its entirety. 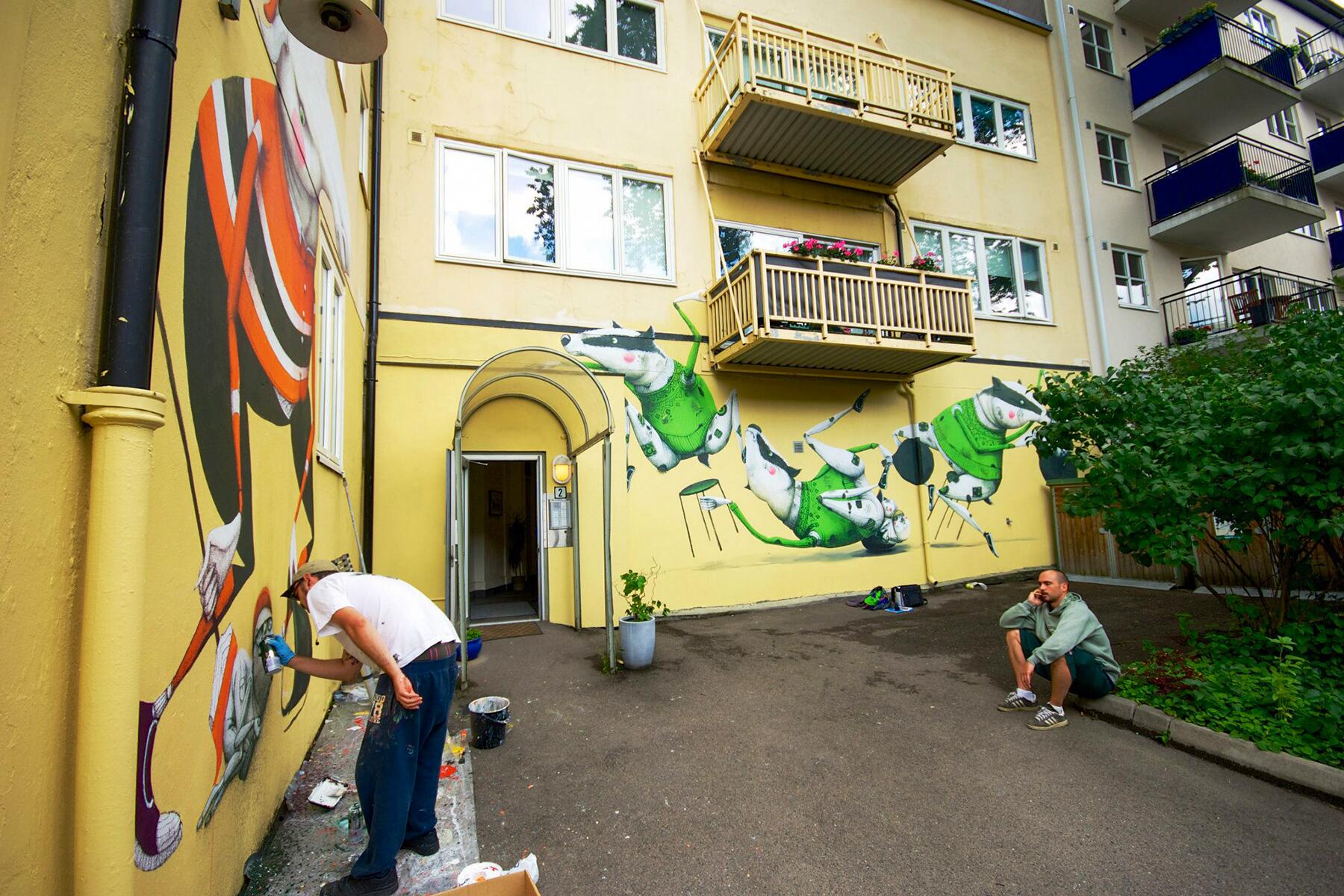 The Italian street artist Zed1 has graced Oslo with his street art more than once, but this out-of-the-way vertical piece leaves much open to interpretation. Zed1 is known for embellishing animals with imaginative designs and this untitled 2012 piece is in line with his usual motifs. Pay close attention to the nuances; Zed1 is known for painstakingly detailing even the hair on his creatures. 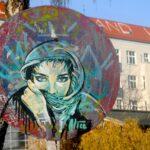 RELATED STORY
These 12 Cities Are Home to the Best Street Art on Earth
Comments are Closed.
0 Comments