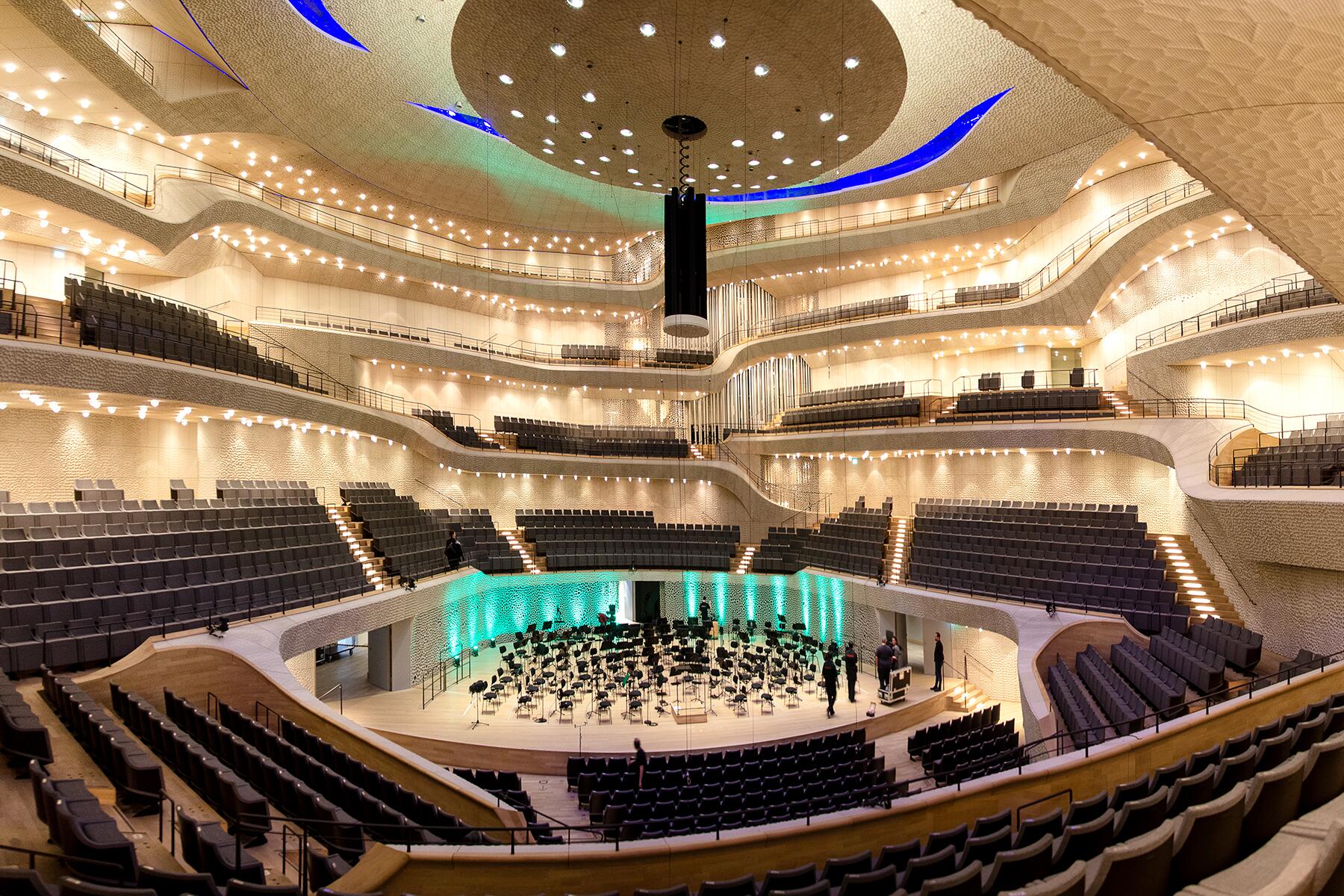 Of course, you might have heard of Oslo’s glitzy Opera House and the country’s traditional stave churches. Beyond this, however, how much do you really know about Norwegian architecture? Read on for a list of 15 structures that highlight the country’s ancient and contemporary design.

Related: We’re so obsessed with Norway, we just published a brand new guide to the country–it’s now available for purchase at Amazon. 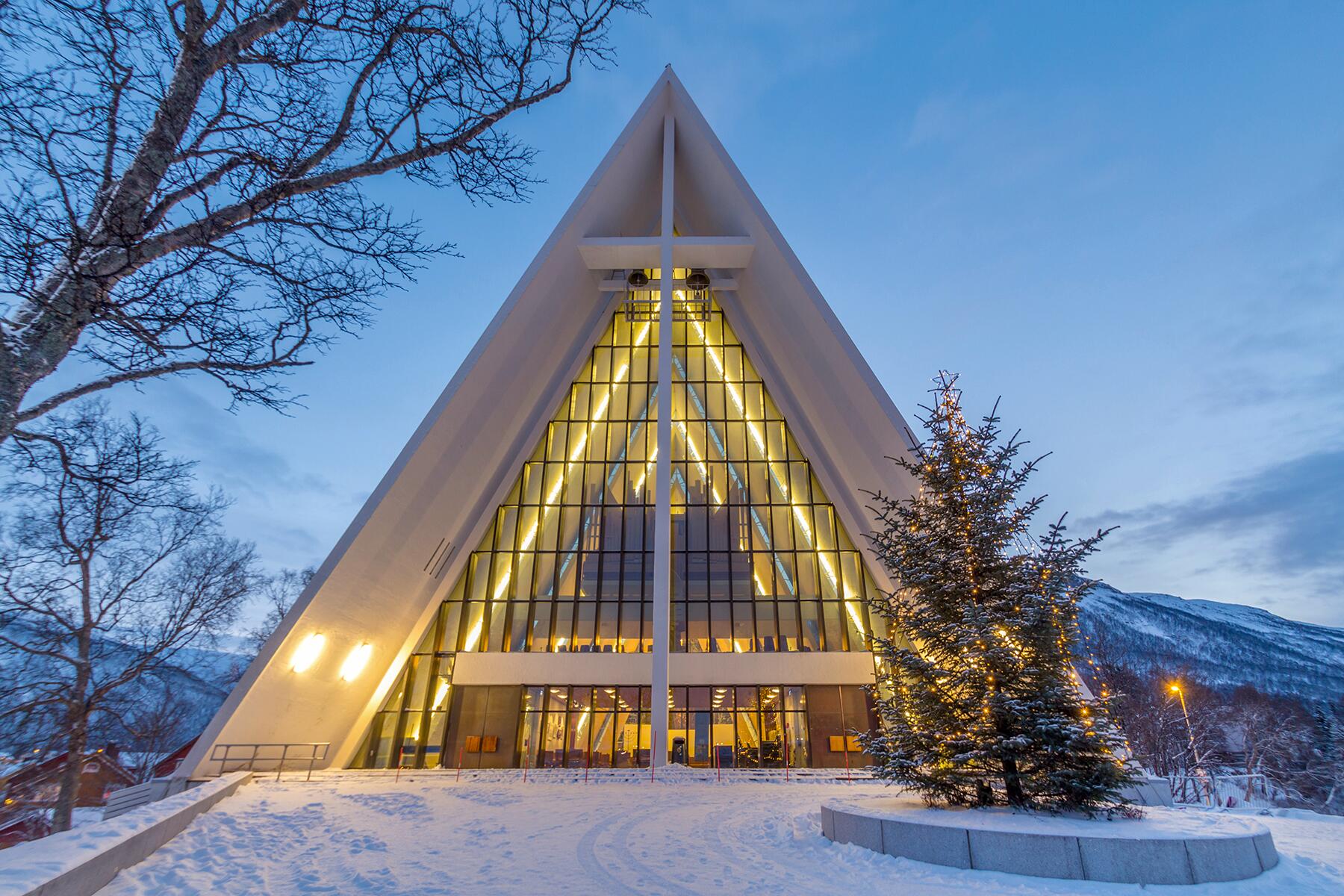 Situated in front of Mt. Storsteinen, the Arctic Cathedral, Tromsø’s most famous landmark is a parish church that was designed to impress by Norwegian architect Jan Inge Hovig in 1965. Thanks to its 11 rooftop triangles, it’s said to resemble either icebergs and/or the typical northern Norwegian cod-drying racks. What exactly inspired the architect to design the Arctic Cathedral in the shape he did is unknown, but his work has certainly impacted the cityscape of the so-called Paris of the North.

INSIDER TIPSurprisingly, it’s best to visit the Arctic Cathedral on a cloudy day, as the colors of the altar’s glass mosaic show to their best advantage. Also, between June and August, as well as February and March, the church hosts midnight sun or northern lights concerts (respectively) around 11 p.m. 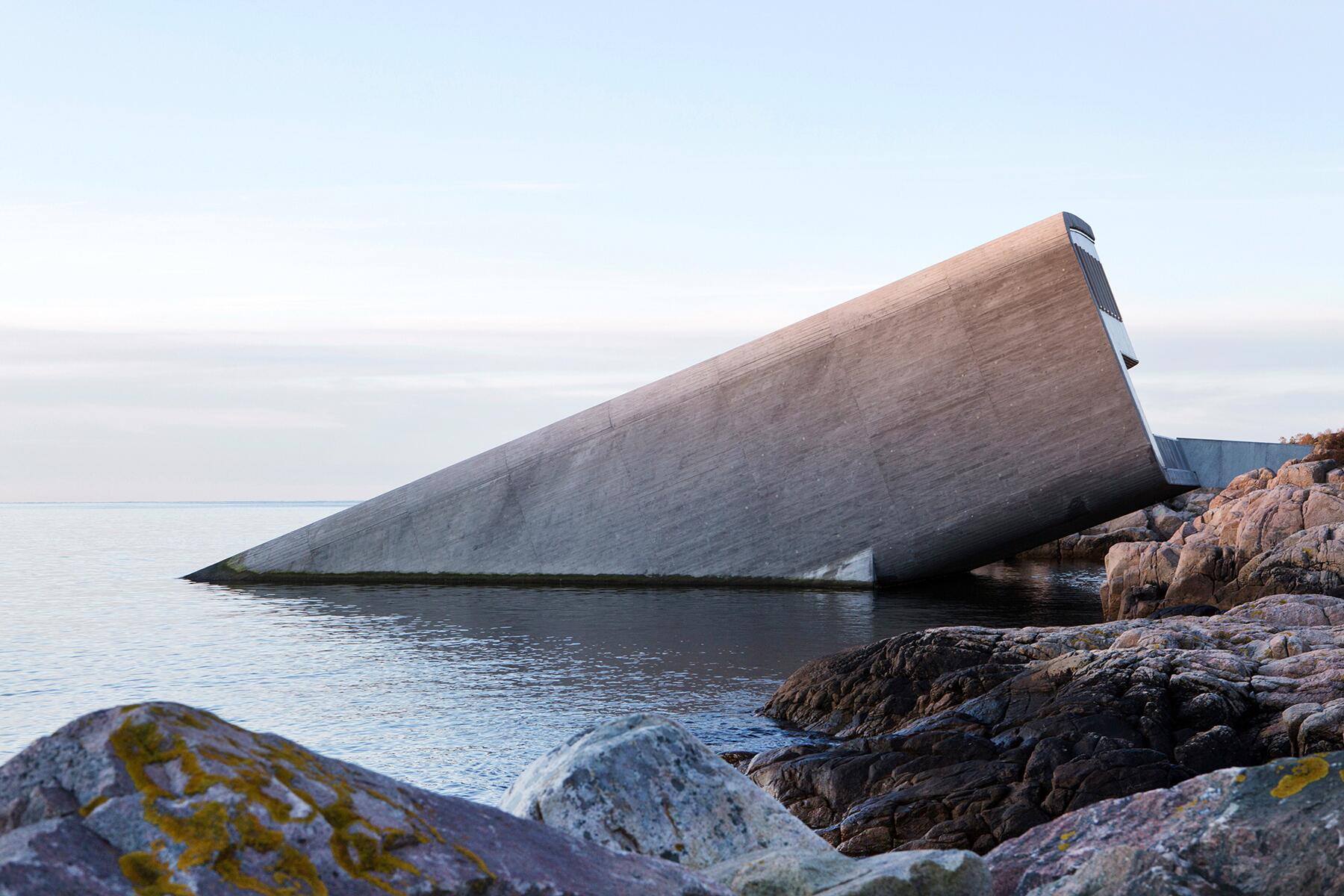 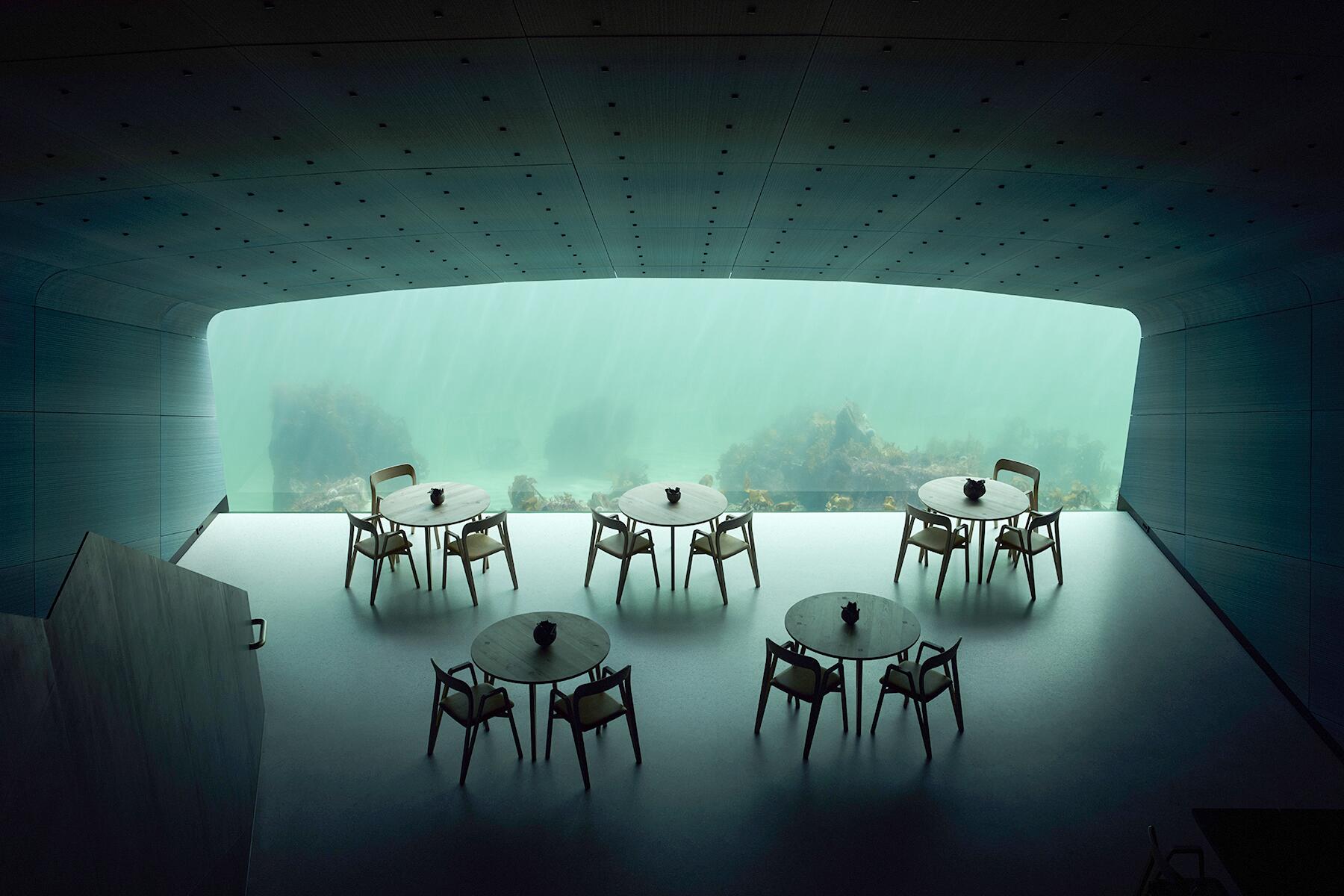 PHOTO: IVAR KVAAL
Previous Next
2 OF 15

Translating to both “underneath” and “wonder,” Under is Europe’s first subaquatic restaurant. It’s also the world’s biggest, with more than 5,300 square feet and a seating capacity of 100 people. The structure consists of a tilted, 111-foot-long concrete block that sits on the seabed and is connected to onshore rocks by a bridge. Panoramic windows enable you to view the maritime flora and fauna while enjoying the best cuisine that Norway has to offer.

The chefs—all previously employed at various Michelin-starred restaurants—focus on using local ingredients such as seafood from just outside the door and sheep from the grasslands of Southern Norway. In addition to functioning as a restaurant, Under also offers the opportunity for maritime research: the building’s concrete facade will eventually form an artificial reef.

INSIDER TIPDespite Under’s large size and seating capacity, space is limited, and reservations well in advance are a must as only 40 people can dine here on a regular night. 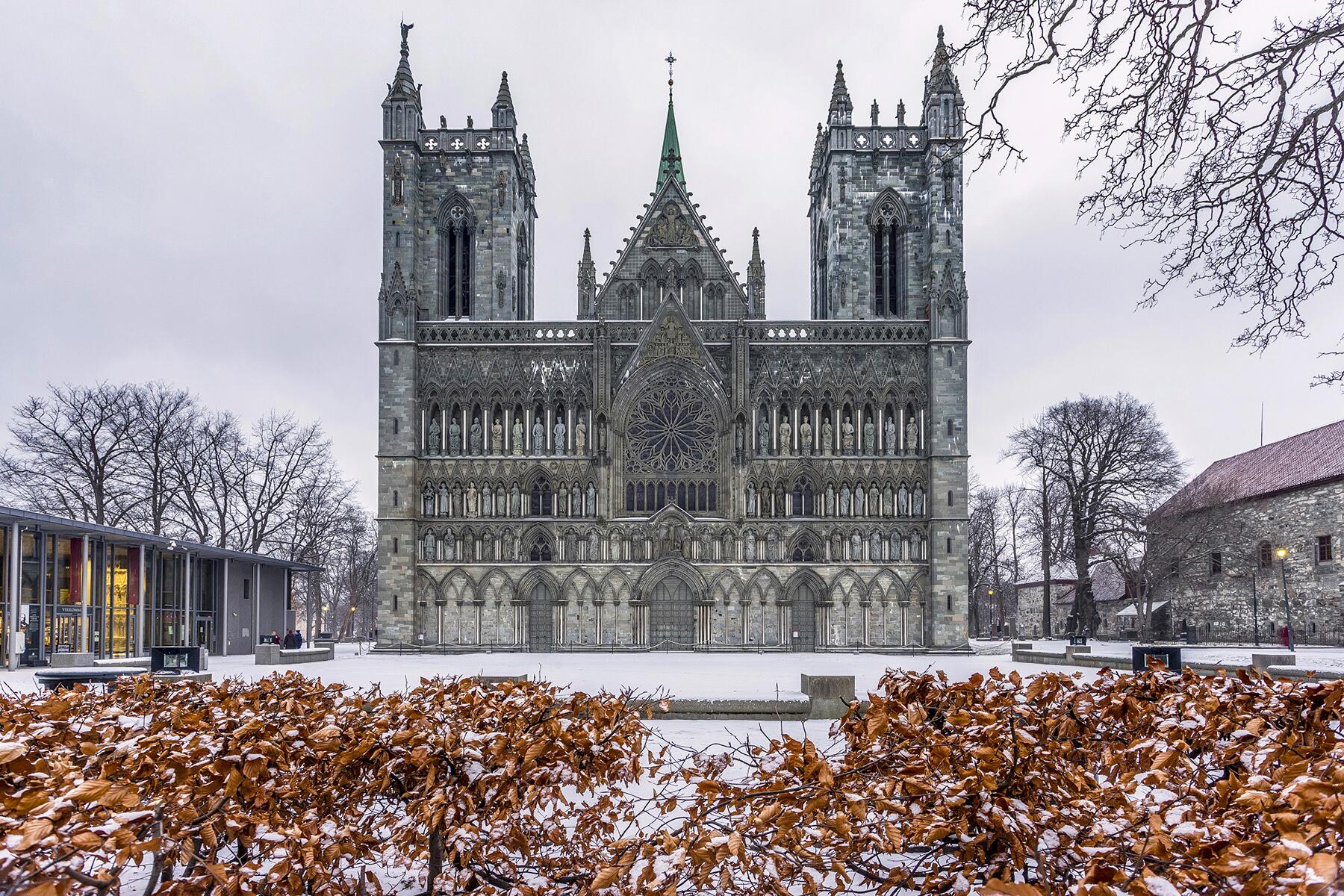 Nidaros Cathedral, the world’s northernmost medieval cathedral, has cultural as well as historical significance. Built over the course of 230 years (between 1070 and 1300), it was originally established to honor King Olav II, who became St. Olav after his death in 1030. Not only is this the site of his grave, but it’s also where Norwegian kings were crowned until the practice was ended in 1906.

Between the 14th and 18th centuries, Nidaros was damaged by multiple fires (it almost burnt to the ground entirely in 1708) and has undergone several major restorations, most recently in 2001. The Gothic structure is not only an important Trondheim sight, but also a pilgrimage destination along St. Olav’s Way from Selånger in Sweden. Inside, there’s seating for almost 2,000 people, and guided tours take place throughout the year. 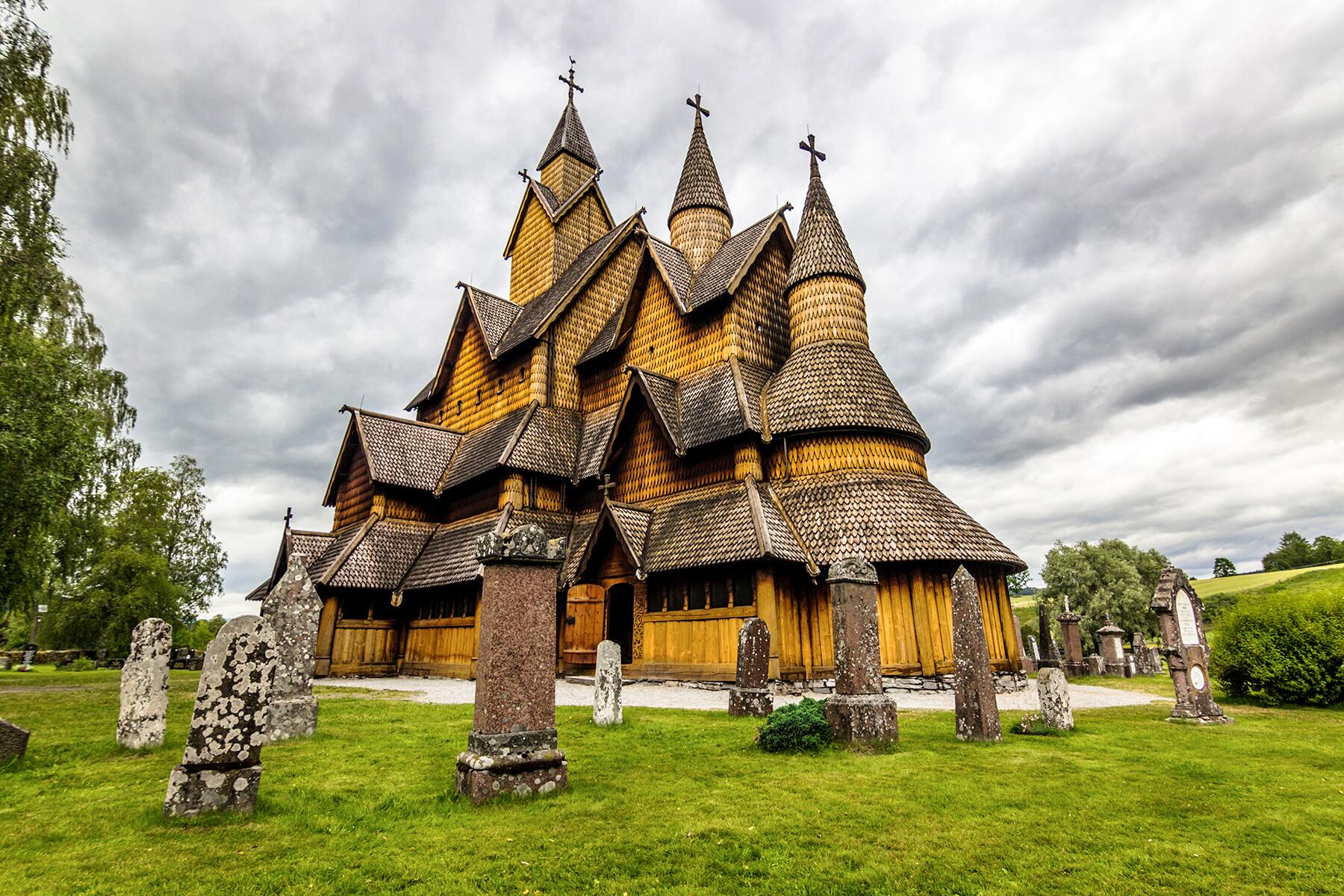 Almost 66 feet long and 85 feet tall, the 13th-century Heddal Stave Church is the country’s largest preserved stave church. According to Norwegian folklore, a troll named Finn built it in just three days. According to historians, the timeframe was much longer, as the three-towered church is believed to have been constructed on the site of a much older church, whose former nave had likely been converted to serve as the current structure’s choir. Heddal has been restored twice (the last time was in the 1950s) and is still used as a parish church. It’s open to visitors in summer. 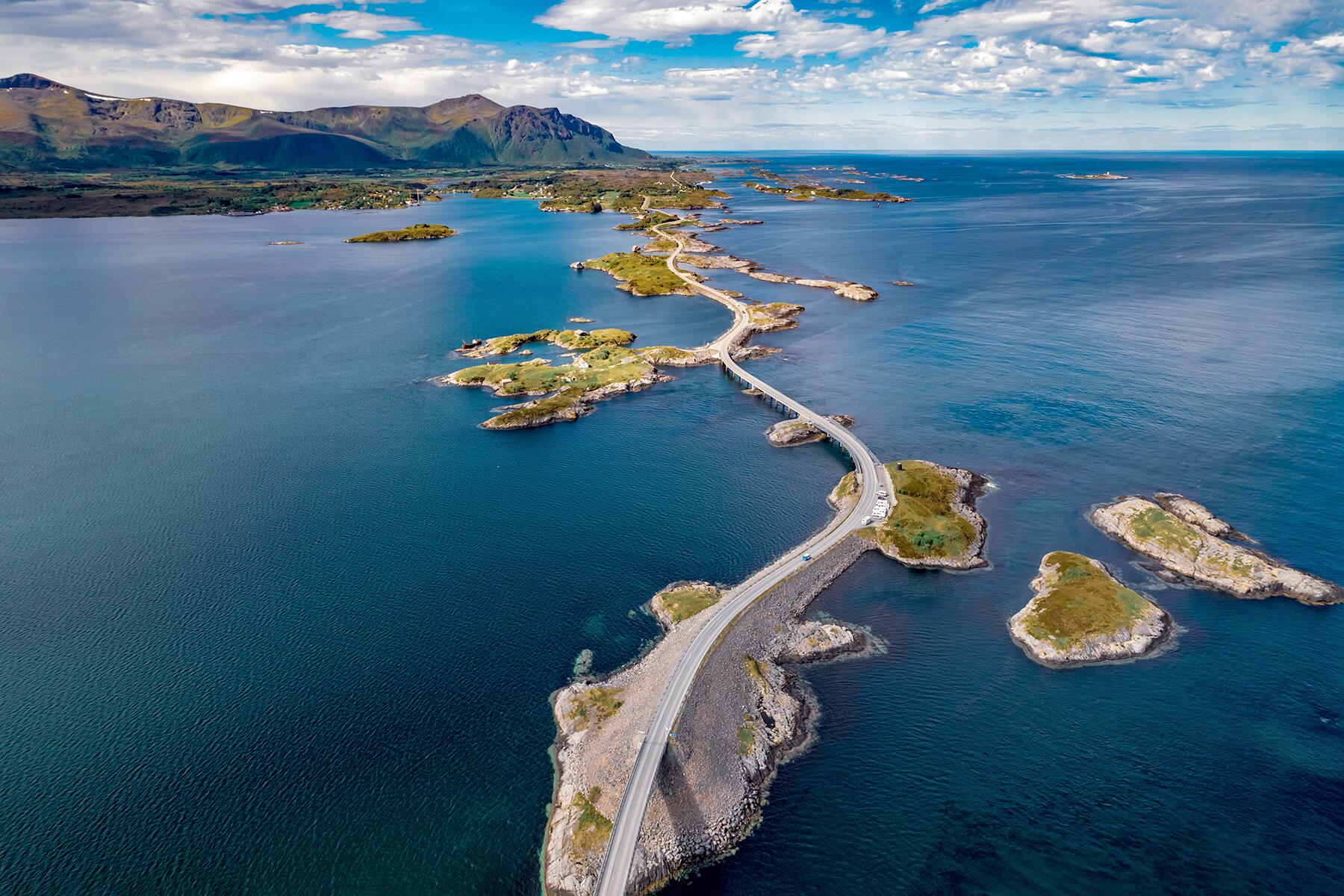 The Bridges of Atlantic Ocean Road

Atlantic Ocean Road—a 5-mile stretch of Norwegian Road 64 connecting the mainland with Averøy Island—has been cited on lists of the world’s best road trips and received Norway’s Construction of the Century award in 2005. It was built in the 1980s and has a total of eight bridges, including Storseisundbrua, the longest (850 feet) and highest (75 feet).

Financing for construction was provided by tolls, but the road paid for itself after just 10 years and is now free. Several viewpoints allow you to stop for a look at the ocean and surrounding islands.

INSIDER TIPThe road might be closed in bad weather; check ahead, especially in fall, when the region is known for having fierce storms. 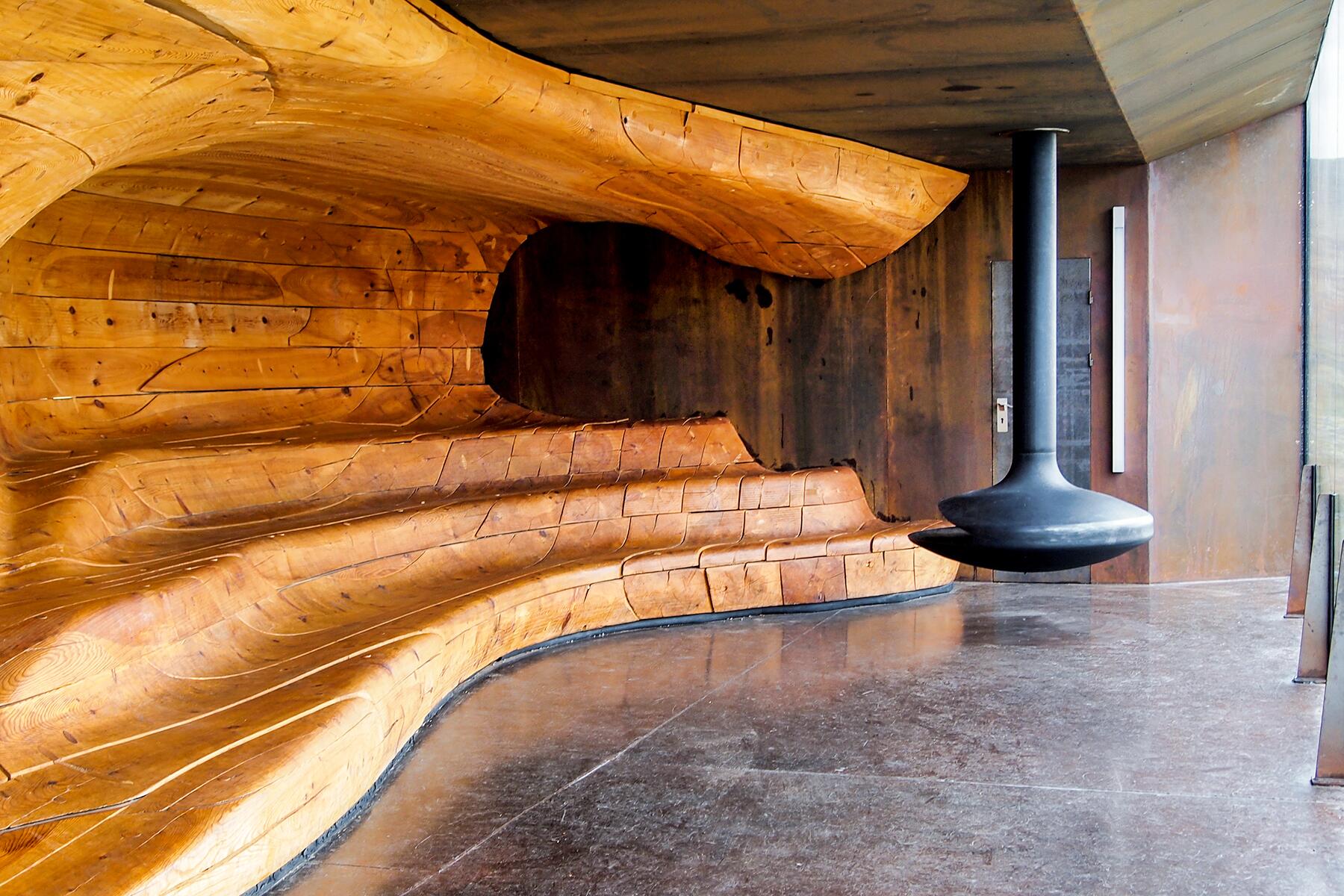 The large Norwegian Wild Reindeer Centre Pavilion, more commonly known as Snøhetta Viewpoint, offers panoramas of Mt. Snøhetta and Dovrefjell-Sunndalsfjella National Park. The building was designed by the Norwegian architectural agency Snøhetta and functions as a warm, dry place to sit down, take a break, and enjoy the views. With a bit of luck, you might spot musk ox and wild reindeer. The building is open from June until mid-October and can be reached via the hiking trail from the Snøhetta parking lot or the train station at Hjerkinn. 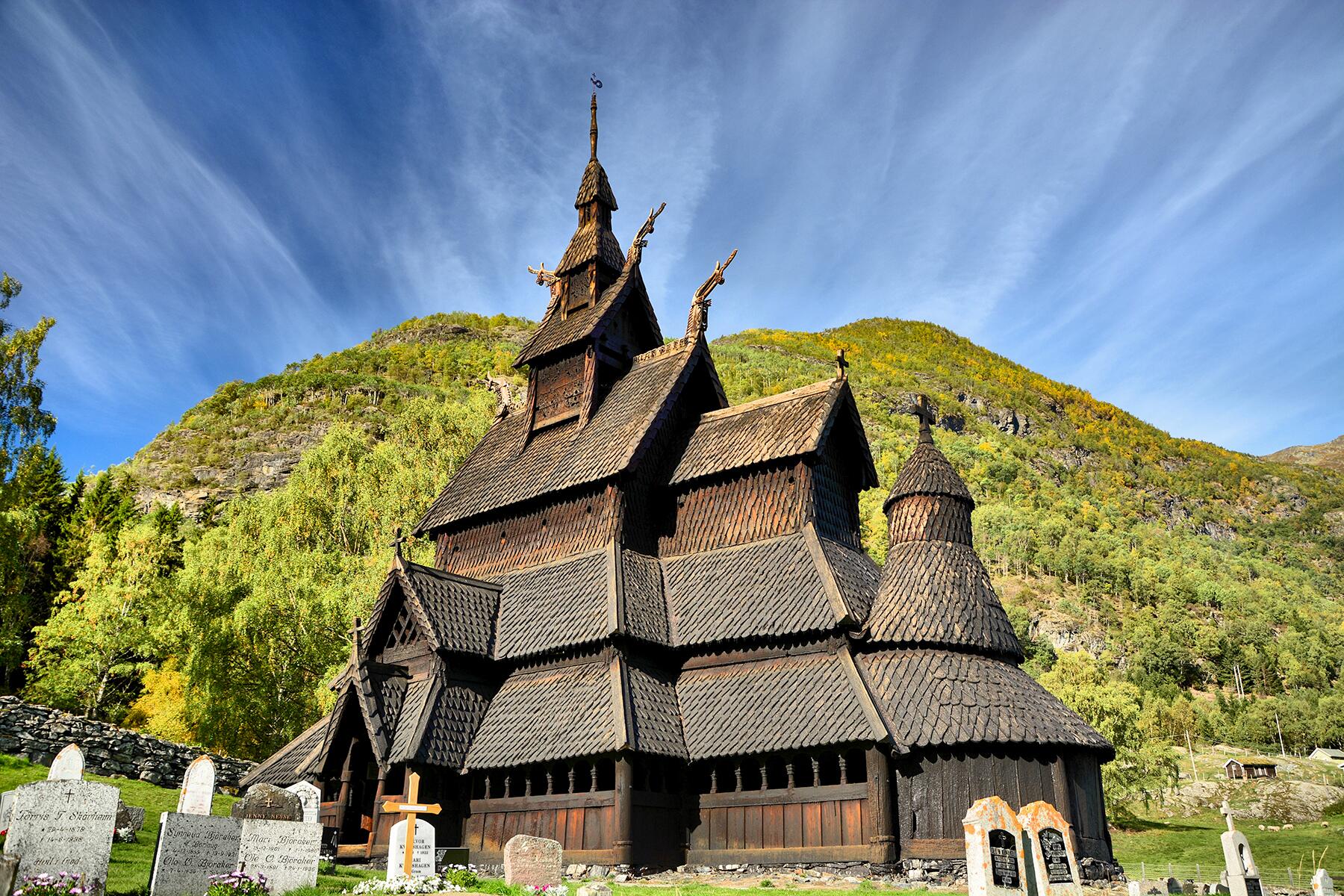 Unlike Heddal Stave Church, Borgund Stave Church—one of the best-preserved of such structures in the country—isn’t a parish church, but rather a museum. Dating from roughly 1180, it’s been enlarged and restored several times over the centuries and was replaced as a parish church by one that was built in 1868. Today, the 12th-century structure is under the auspices of the Society for the Preservation of Ancient Norwegian Monuments and is open to visitors between April and September. 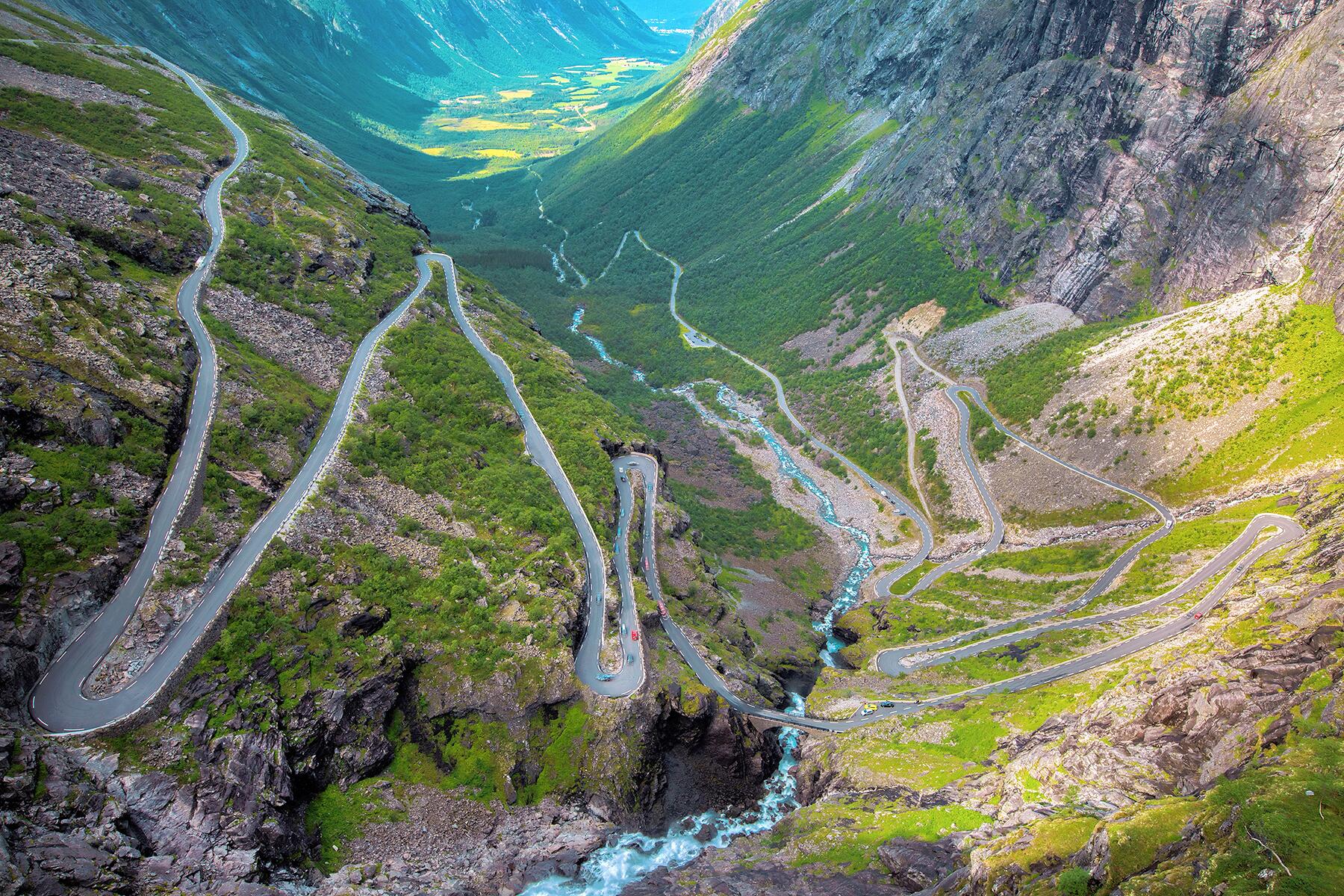 Trollstigen (Troll’s Path) is part of Norwegian Road 63, which connects Geiranger with Åndalsnes. It features a roughly 6-degree incline, 11 hairpin turns, and a visitor center with magnificent views of it from above. The serpentine route is closed in winter (from about mid-October or November), when traversing it is just too dangerous; it opens for the summer tourist season sometime in May.

INSIDER TIPIn peak season between mid-June and August, up to 2,500 cars drive along Trollstigen on an average day. For less-trafficked conditions, visit in early June or September. 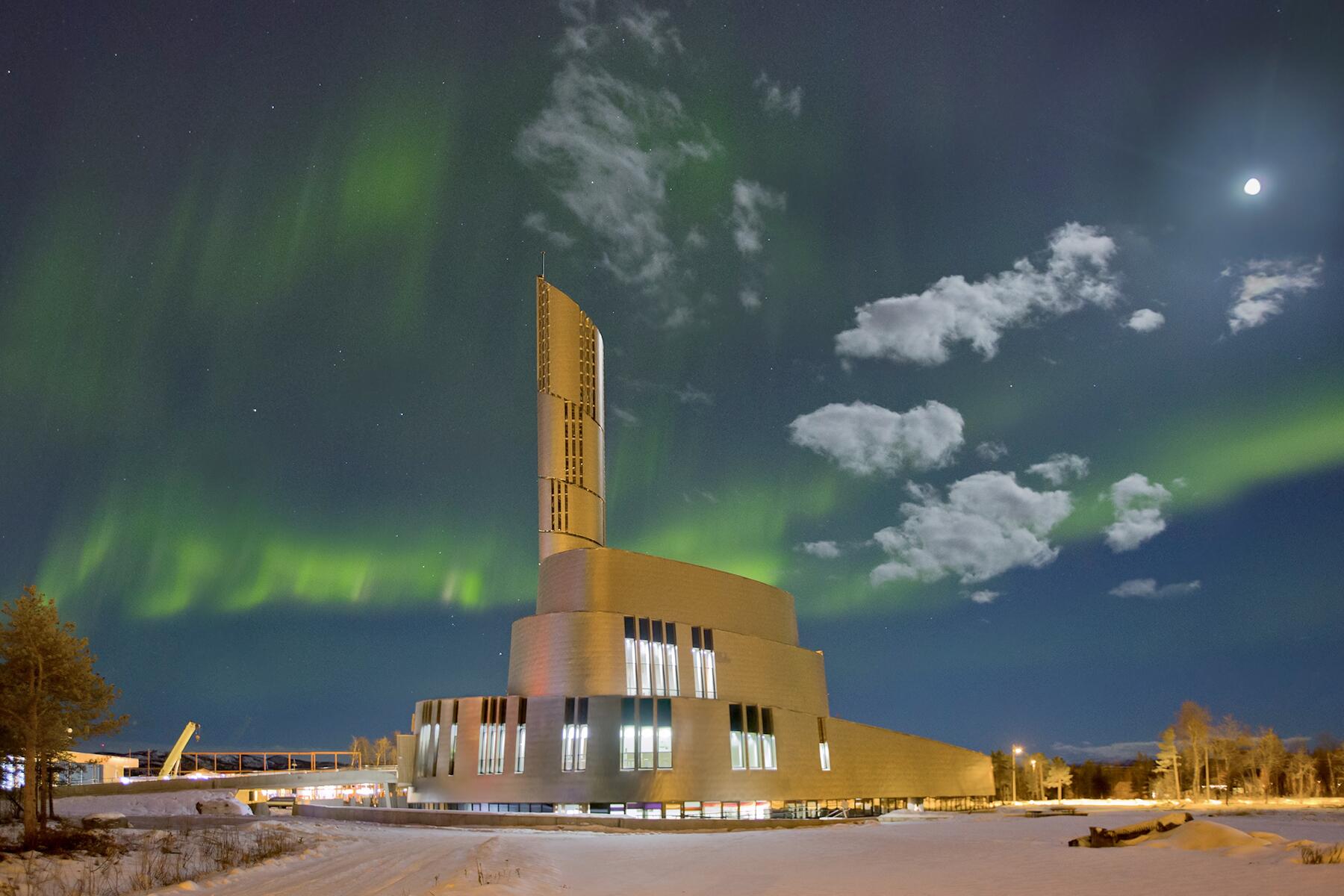 Despite its name, the Northern Lights Cathedral is actually a parish church. Designed by the Norwegian LINK architectural firm and completed in 2013, it has its critics, who liken the modernist, titanium-clad structure and its multitiered spire to a factory. It is, nevertheless, an intriguing example of contemporary Norwegian design. The church is open year-round; be sure to step inside to see its altar and organ backed by light installations that evoke the aurora borealis. 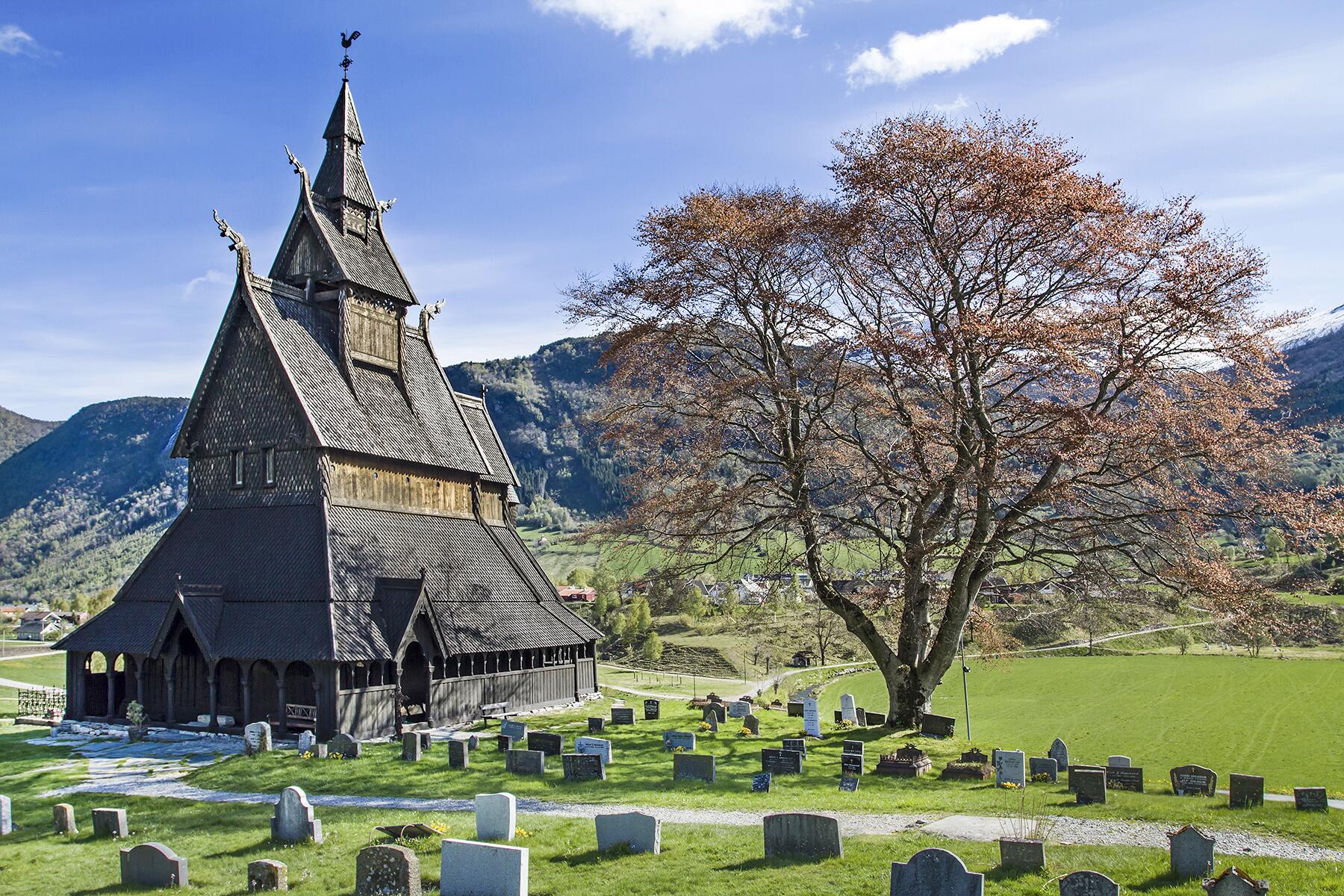 Hopperstad Stave Church was built in 1130, making it one of Norway’s oldest. It was restored in the late 19th-century by Norwegian architect Peter Andreas Blix, who used Borgund Stave Church, with its triple nave, as inspiration and who discovered the remains of an older, 11th-century church on the site. Like Borgund, this stave church is preserved by the Society for the Preservation of Ancient Norwegian Monuments; it’s open to the public between May and September. 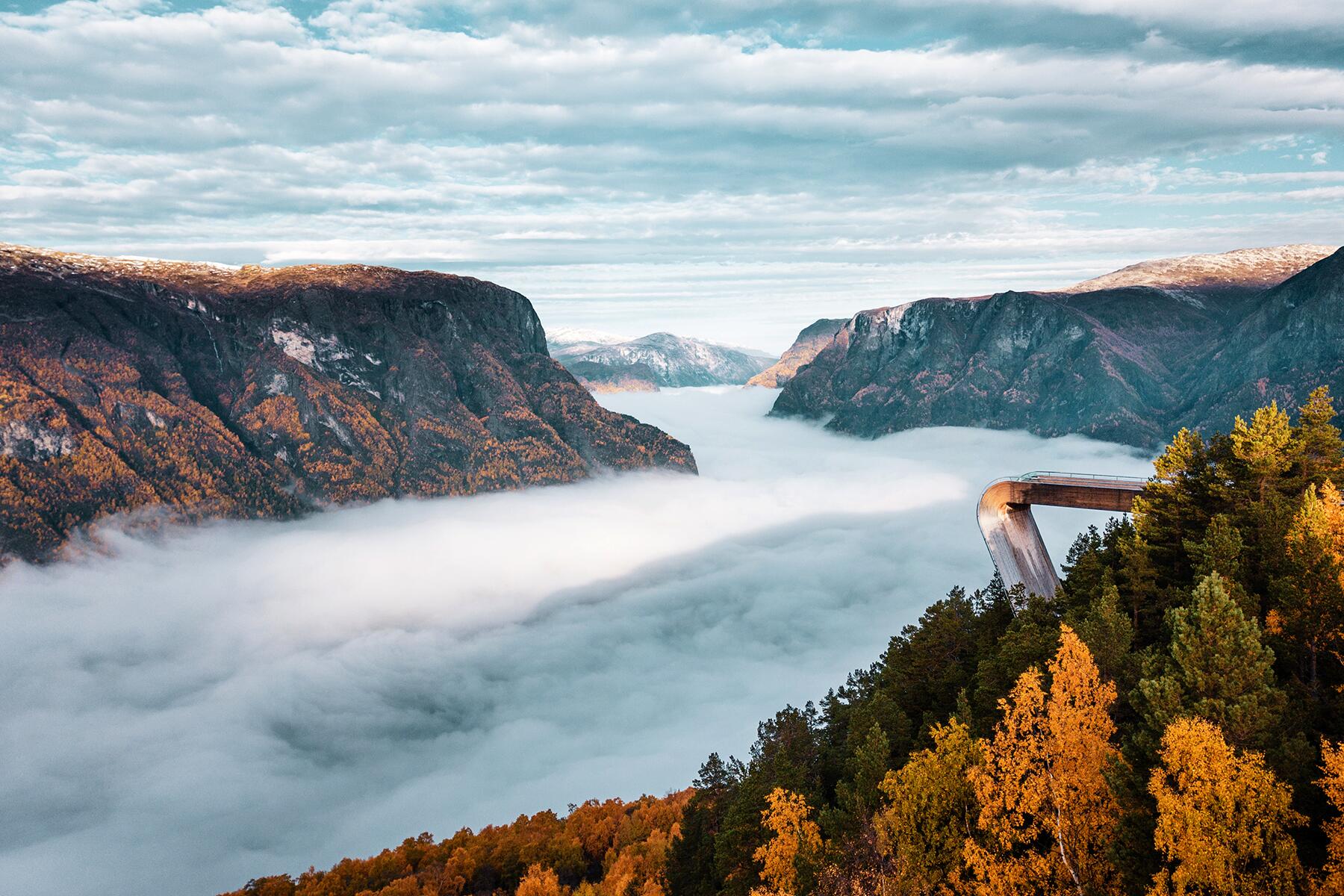 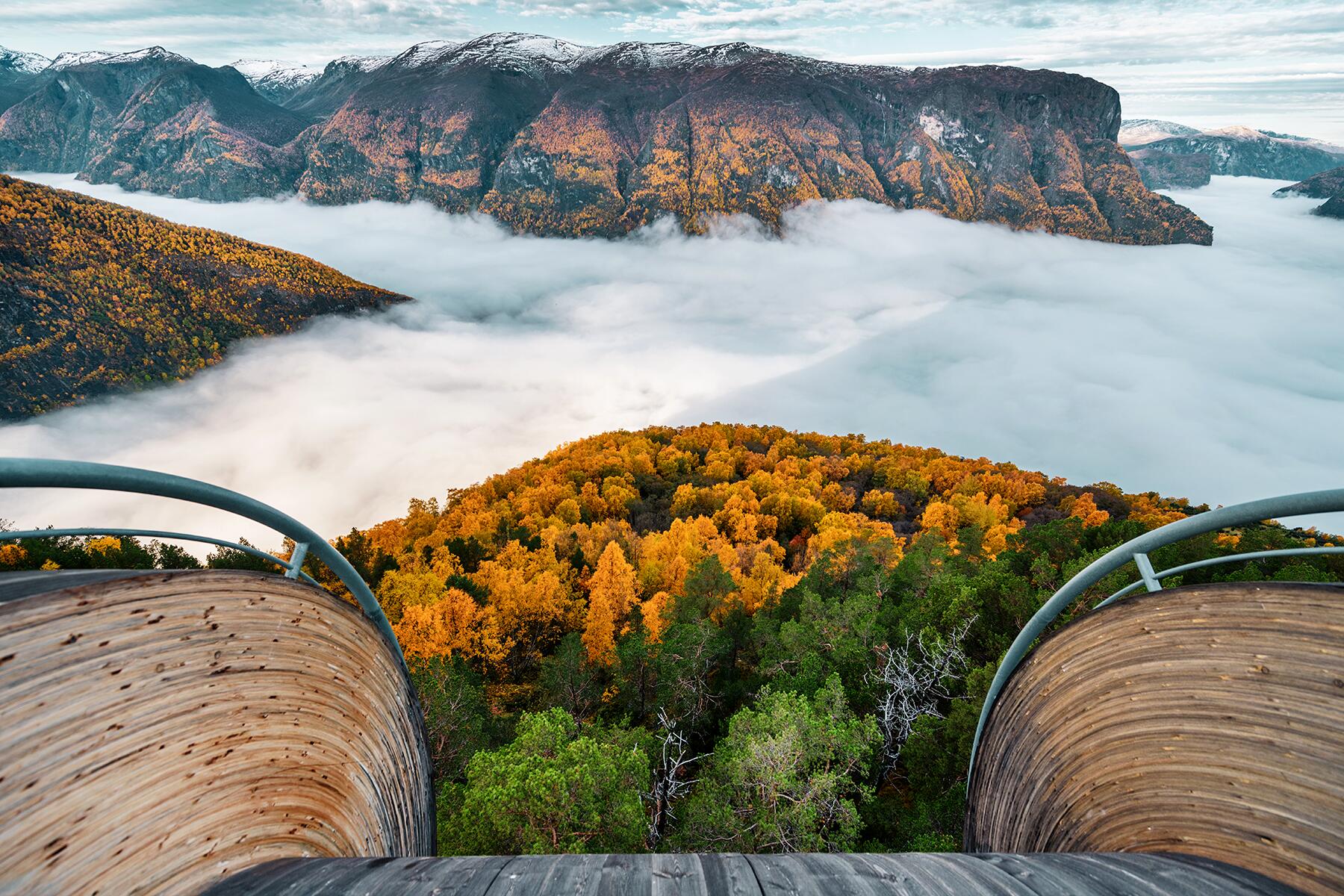 Designed by the architectural team of Todd Saunders and Tommie Wilhelmsen, the 98-foot-long, 13-foot-wide, steel-and-wood Stegastein viewing platform protrudes from the side of a mountain roughly 2,100 feet above sea level. Opened in 2006, it’s situated along the Bjørgavegen (aka Fv243), a serpentine road connecting Lærdalsøyri with Aurlandsvangen. It’s also a popular stop for visitors traveling by Flåm Railway. 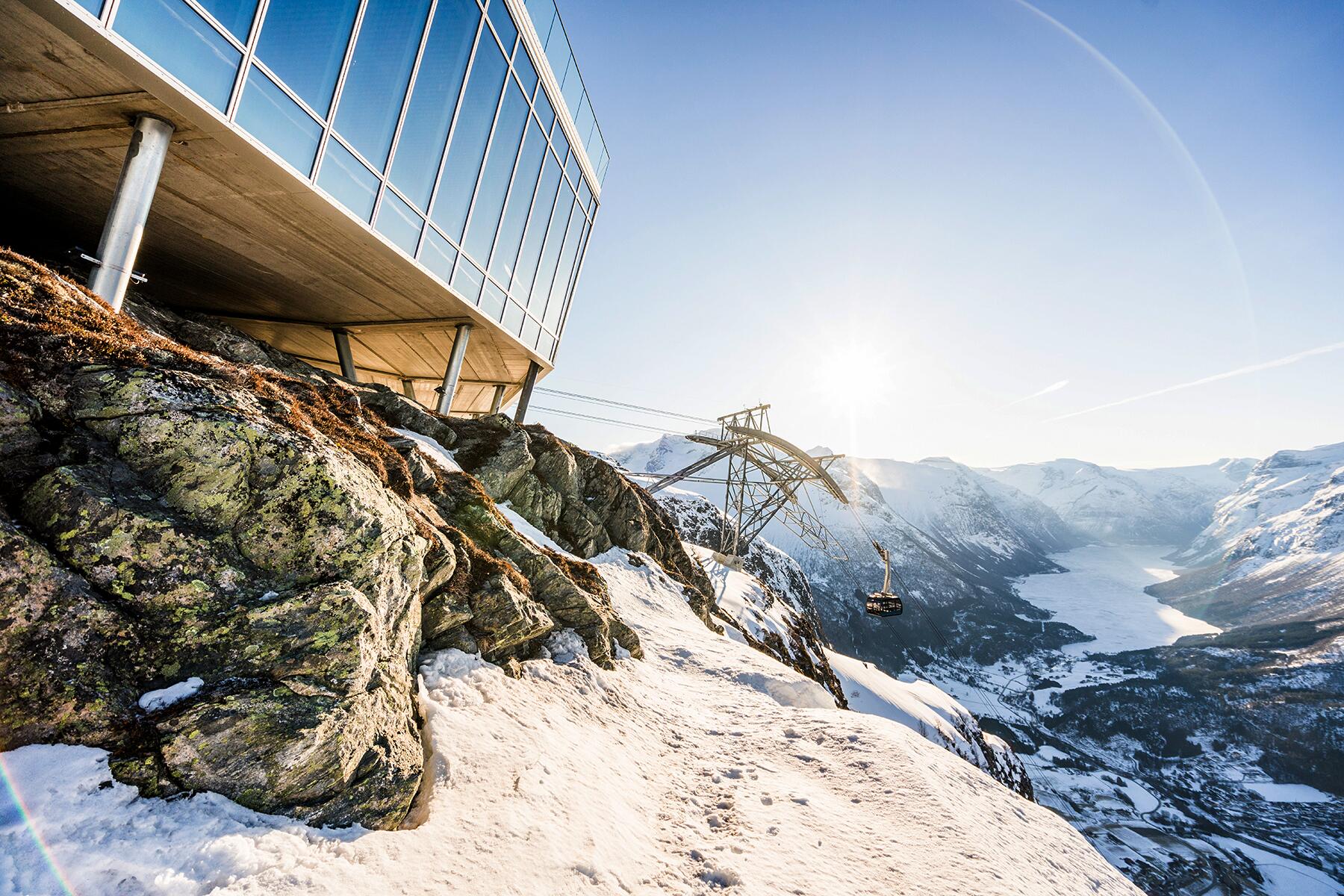 Loen Skylift is Norway’s steepest cable car line, with an average ascent of 45 degrees. It’s also relatively speedy, traveling from the lower station in Loen up 3,600 feet to Mt. Hoven in just five minutes. Despite pricey tickets, the cable car is a major draw—one that has, since opening in 2017, increased tourism in the village exponentially.

The skylift dangles you almost 560 feet above the ground, and the journey is well worth conquering any fear of heights you might have. The views along the way are spectacular and, from the upper cable car station, you can see Nordfjord, Lake Lovatnet, and Jostedalsbreen Glacier in the distance.

INSIDER TIPThe truly brave should look into the challenging Via Ferrata experience, which involves climbing, ziplining, and crossing a suspension bridge before returning to the village by cable car. 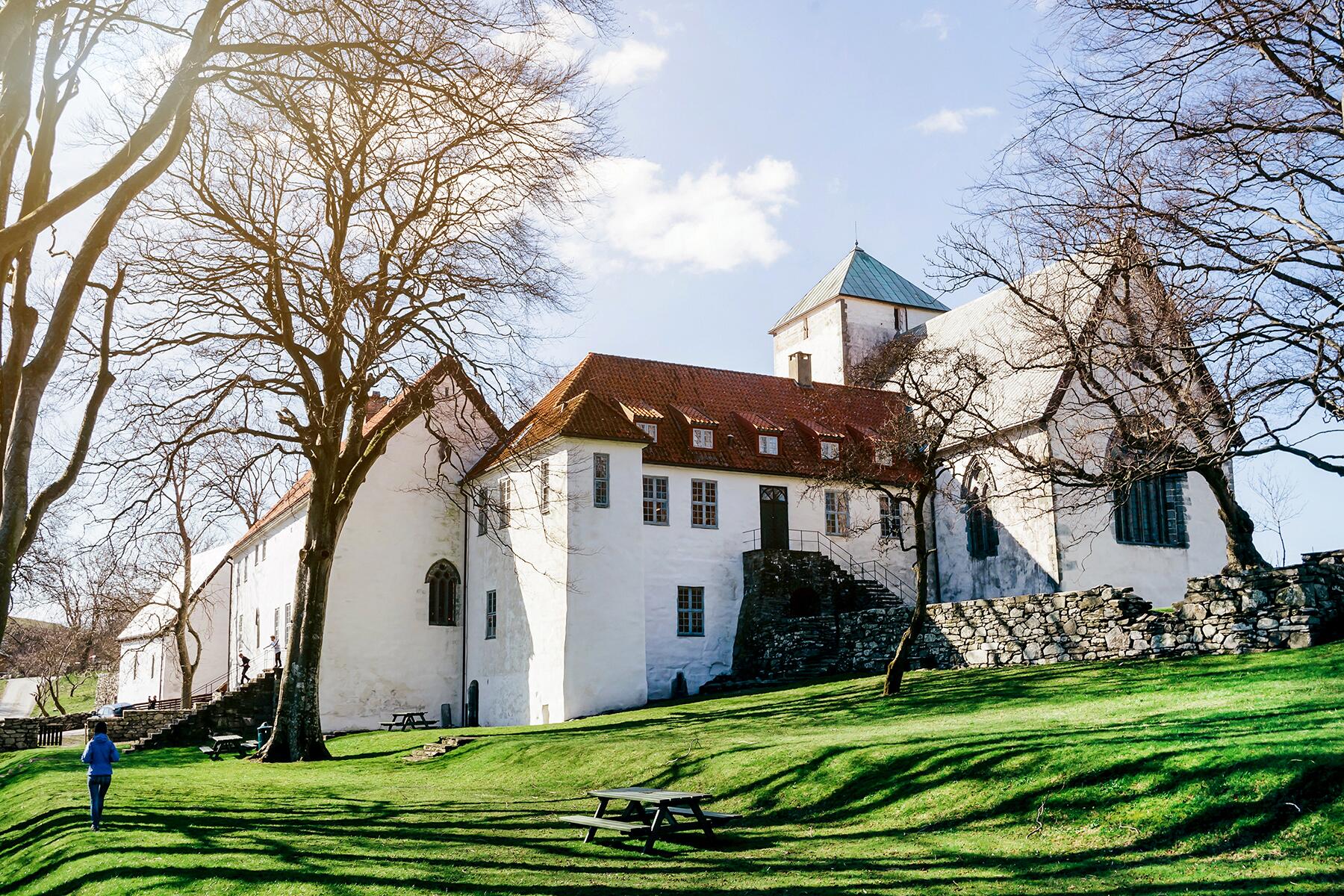 Utstein Abbey is Norway’s best-preserved medieval monastery and the only one with a tower between its choir and its nave. It was built around 1260, but in the Viking era, it served as a fortress under Harald Fairhair, who is said to be Norway’s first king. From when the monastery was built until the Reformation in 1537, it housed 12 Augustinian monks at any given time. Hailing from England and Denmark, the first of these monks introduced fruit cultivation to Norway. In addition, the surrounding farmland was both abundant and fertile, making Utstein the country’s wealthiest monastery, capable of feeding about 250 people with its harvests.

Following the Reformation, the monastery was abandoned until about 1700, when the local Garmann family purchased it. It has undergone several restorations, with the last one completed in 1965. Today, the monastery is a museum surrounded by lands where sheep owned by the descendants of the Garmann family still graze.

INSIDER TIPCheck the local schedule to see if the monastery is hosting any concerts in the church. Resonance chambers built into its walls back in the 13th century make the acoustics here truly exceptional. 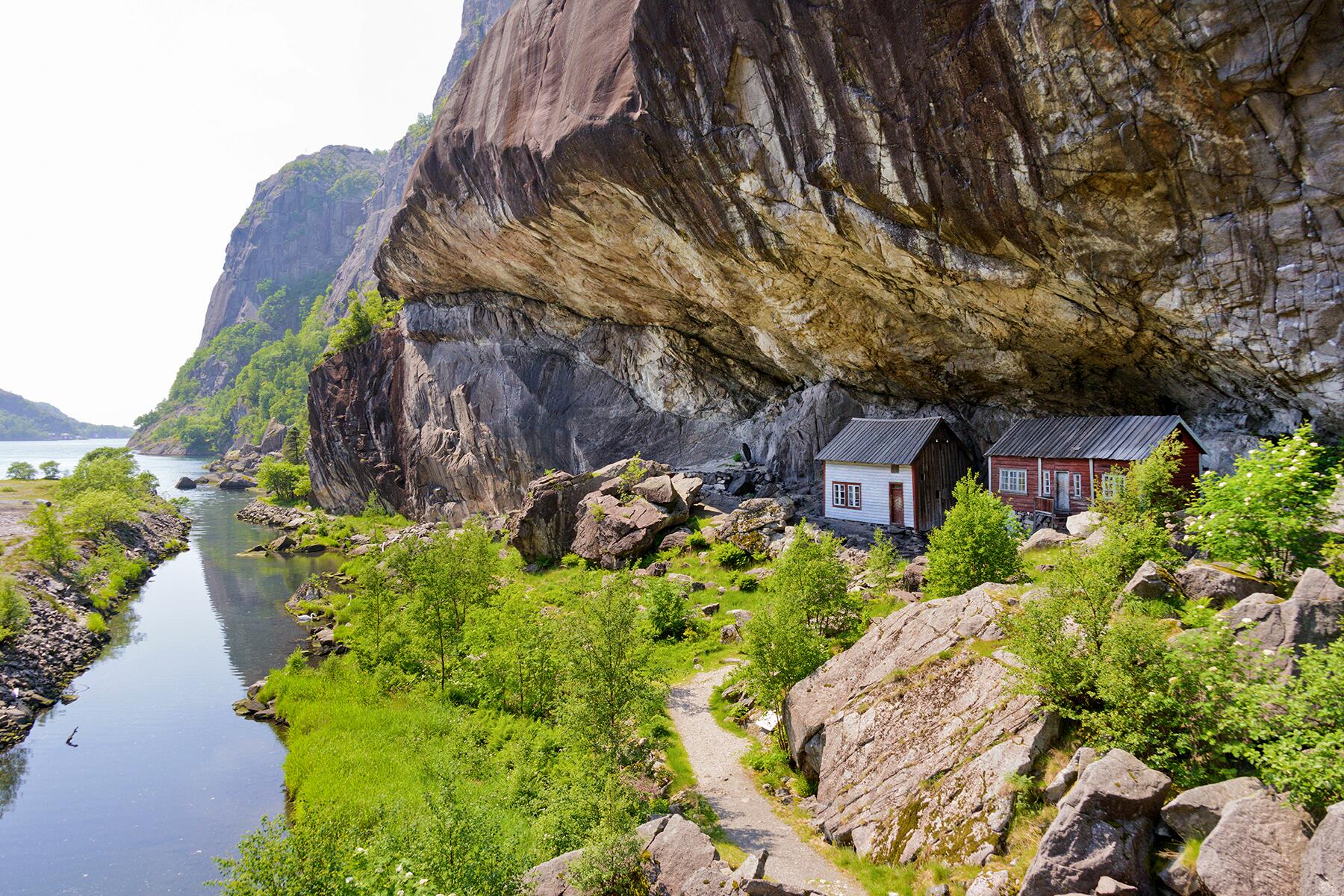 Historians believe that the Helleren i Jøssingfjord site at Jøssingfjord in southwestern Norway was first inhabited in the 16th century. Situated beneath a 197-foot-long, 33-foot-high mountain overhang, the site is, indeed, a spacious, shielded spot. The two wooden buildings still standing here date from the 19th century and are now a cultural site and museum.

INSIDER TIPYou can visit the site and enter the buildings free of charge at any time of year. Just be sure to leave everything exactly as you found it. 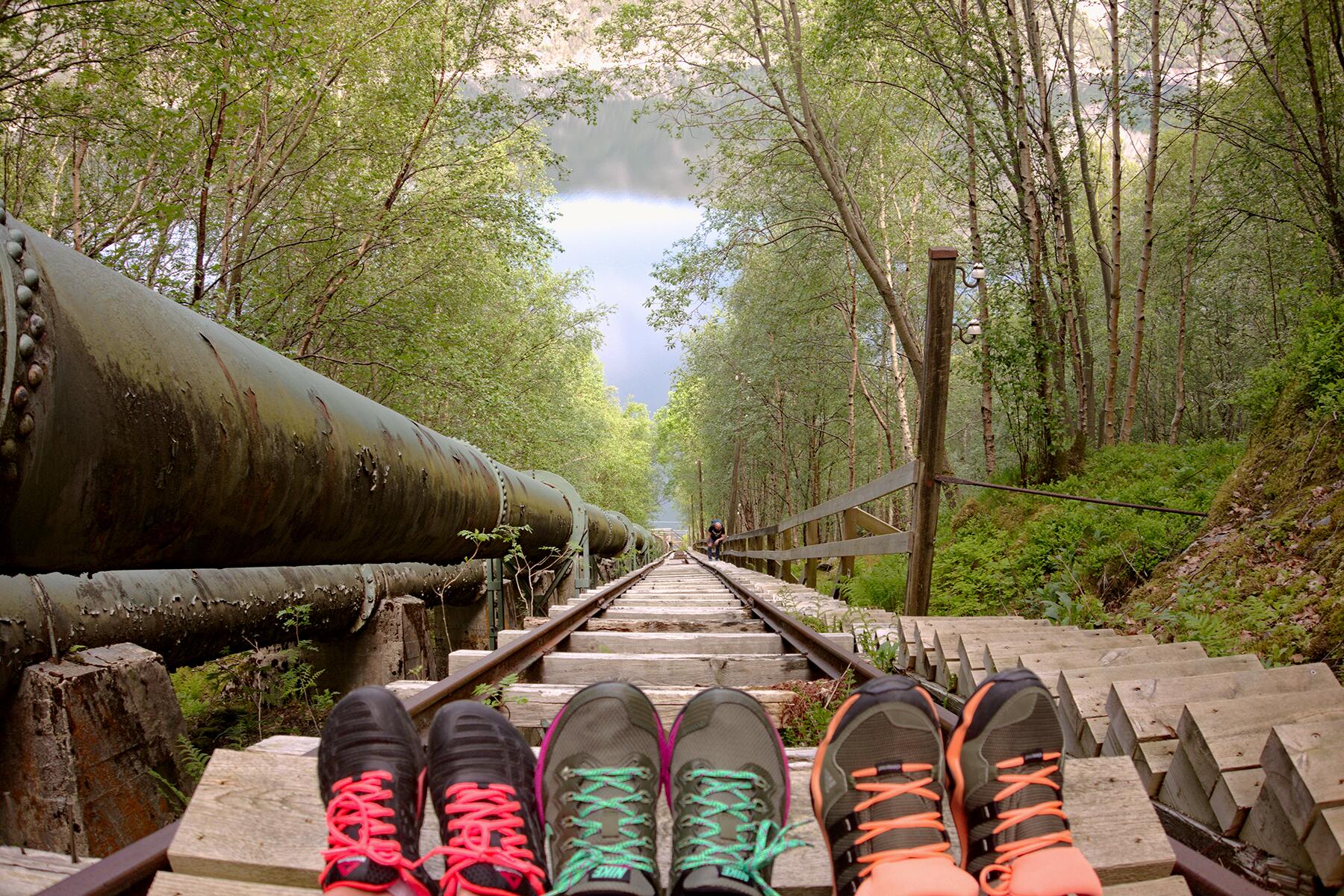 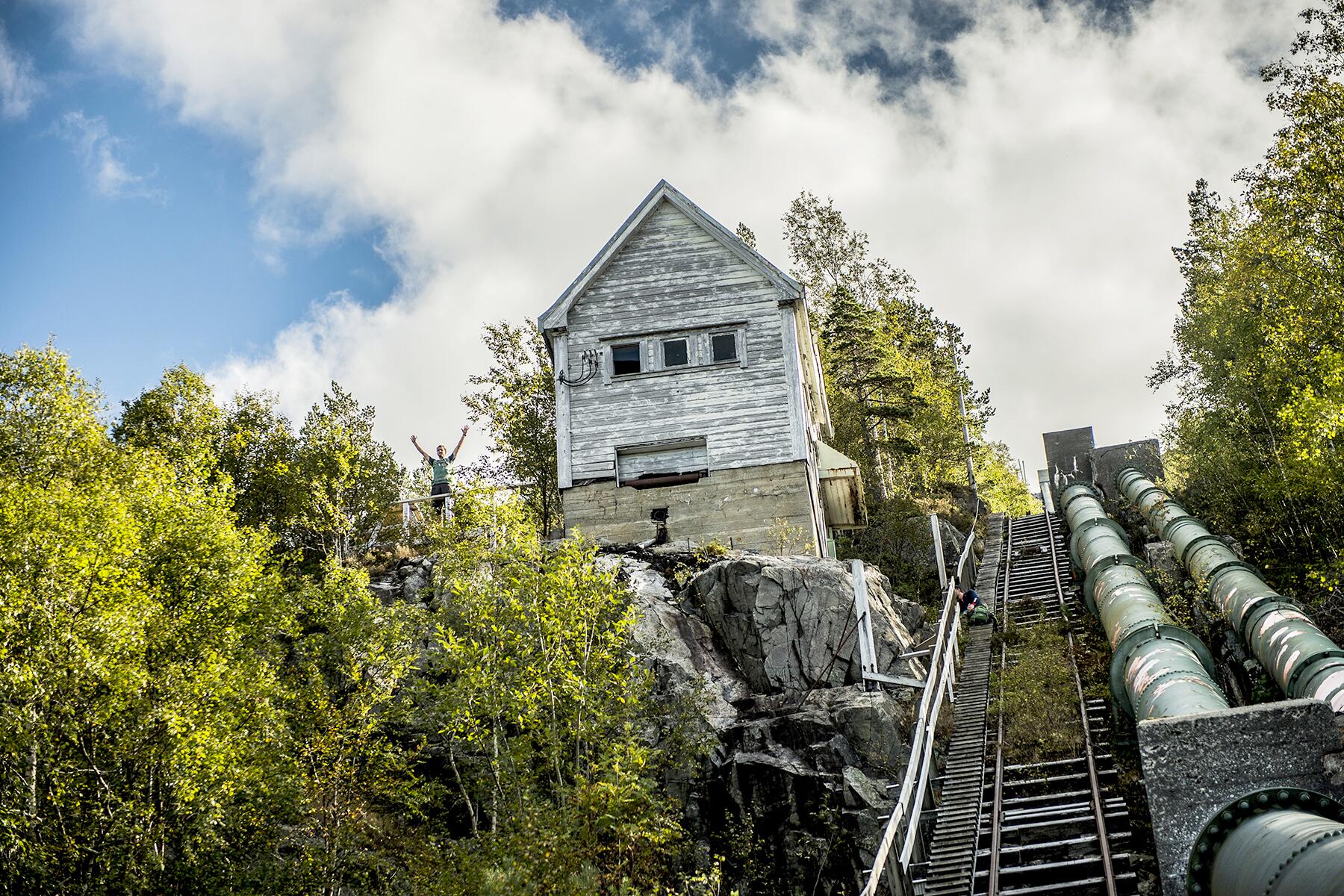 As its name suggests, Flørli 4444, the world’s longest wooden staircase, has 4,444 steps from Lysefjord up to Lake Ternevatnet at about 2,300 feet. It was originally used by hydroelectric-powerplant workers from the village of Flørli, which became a virtual ghost town when automation eliminated the need for personnel.

Today Flørli, which has only a couple of year-round residents, comes to life each summer, when many people prefer hiking its wooden staircase to trekking up the nearby but often crowded Pulpit Rock. You can even stay the night in Flørli, which has a seasonal guesthouse and café/pub.

INSIDER TIPThe only way to get here is by ferry from Lauvvik, Lysebotn, or Stavanger; keep in mind that vessels from the latter only sail three times a week.