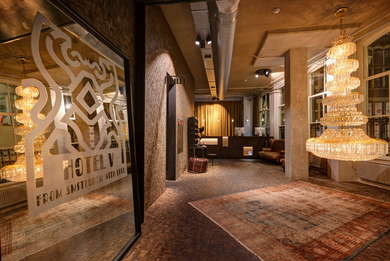 On a pedestrian street of theaters, bars and hotels, mere minutes on foot from Dam Square and the Red Light District, this contemporary boutique hotel offers sleek minimalist rooms, a hip vibe, and staff eager to help guests enjoy their stay.

YOU SHOULD KNOW You’re at the center of it all here and the adjacent square attracts a boisterous crowd, so if you plan on having a few early nights, ask for a room at the back. The front rooms don’t offer much in terms of view anyway.

Rooms are simple but well designed, with vintage furniture, industrial open concept storage, velvety amber wallpaper, parquet floors (and, sometimes, walls!) plus most of the mod cons, such as Nespresso machines and flat-screen TVs. Oh, and they have mini fridges--they're just very well hidden (in what looks like a file drawer). Old theater posters in the hallways reflect the heritage of the district, where Amsterdam’s renowned liberal culture was born in the bawdy brothels, music and theater halls, and artists’ cafés that flourished here in the early 19th century.

Ask in advance if you want a room with a bathtub as many include showers only. 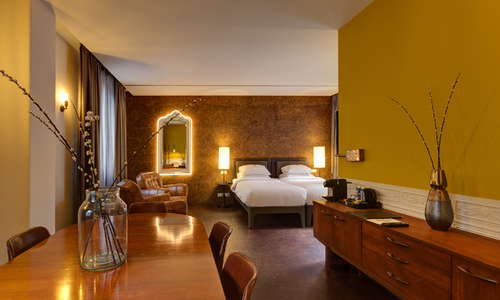 Make sure to grab plenty of Hotel V’s sublime sandalwood-scented Etika amenities before you go.

Though there's not much lobby to speak of, save for some vintage leather seating and a show-stopping oversize French theater chandelier, the lively library and restaurant (actually called "The Lobby") serve as a congregation point for locals and tourists alike to grab a bite or work on their laptops.

With its cozy fireside Chesterfields and low-lit, playhouse decor−think tassled lamps, quirky animal portraiture and a raised podium−The Lobby Restaurant sets the scene for delicious tête-à-têtes. It not only serves as a de-facto lobby, but also as a popular local hangout and dining destination (the flammkuchen, are famous!), and there’s a covered outdoor terrace, too.

Reservations are advised. Yes, it really is that popular.

Ask about the Vieze Boekje, a “dirty little book” with off-menu wines brought back by the sommelier from his many jaunts abroad.

Don’t bother with a car: Parking here is near impossible and you’re dead-center anyway, with easy access to almost all the sights you’ll want to see on foot, plus a tangle of trams nearby that’ll take you all over town.

For slow food brunches and seasonal high-teas featuring plenty of regional products, head to Gartine (4-minute walk). Restaurant Anna (6-minute walk) serves modern European cuisine in a stylish setting that forms a stark contrast to its location at the heart of the Red Light District. Gastro-bistro Kaagman & Kortekaas (7-minute walk), which creatively combines traditional techniques with surprising ingredients, is a must for meat-lovers.

Sexy champagne bar Bubbles & Wines (1-minute walk) is an oenophile’s delight with over 50 wines by the glass. Meanwhile, Mata Hari (9-minute walk) offers a welcome respite in the bustling Red Light District with its retro atmosphere, comfy leather chairs and menu of local beers and bar bites (there’s a decent upstairs restaurant, should you want to stay for dinner).

Hotel V Nesplein puts on quite a show with its theatrically-inspired décor, but this lovely locally-owned hotel’s inclusive atmosphere, friendly staff and central location are what’ll keep you coming back. 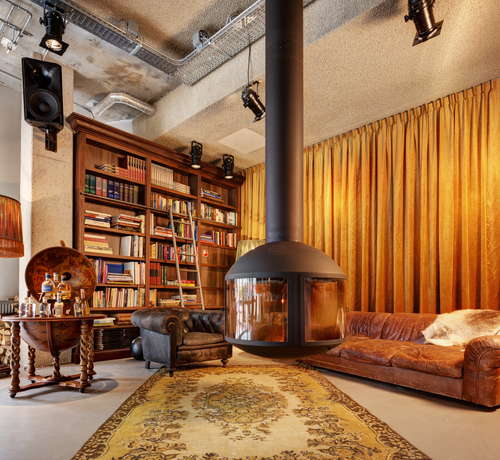 Thank you for your interest!
Look out for our newsletters with travel tips and special offers.
1/2 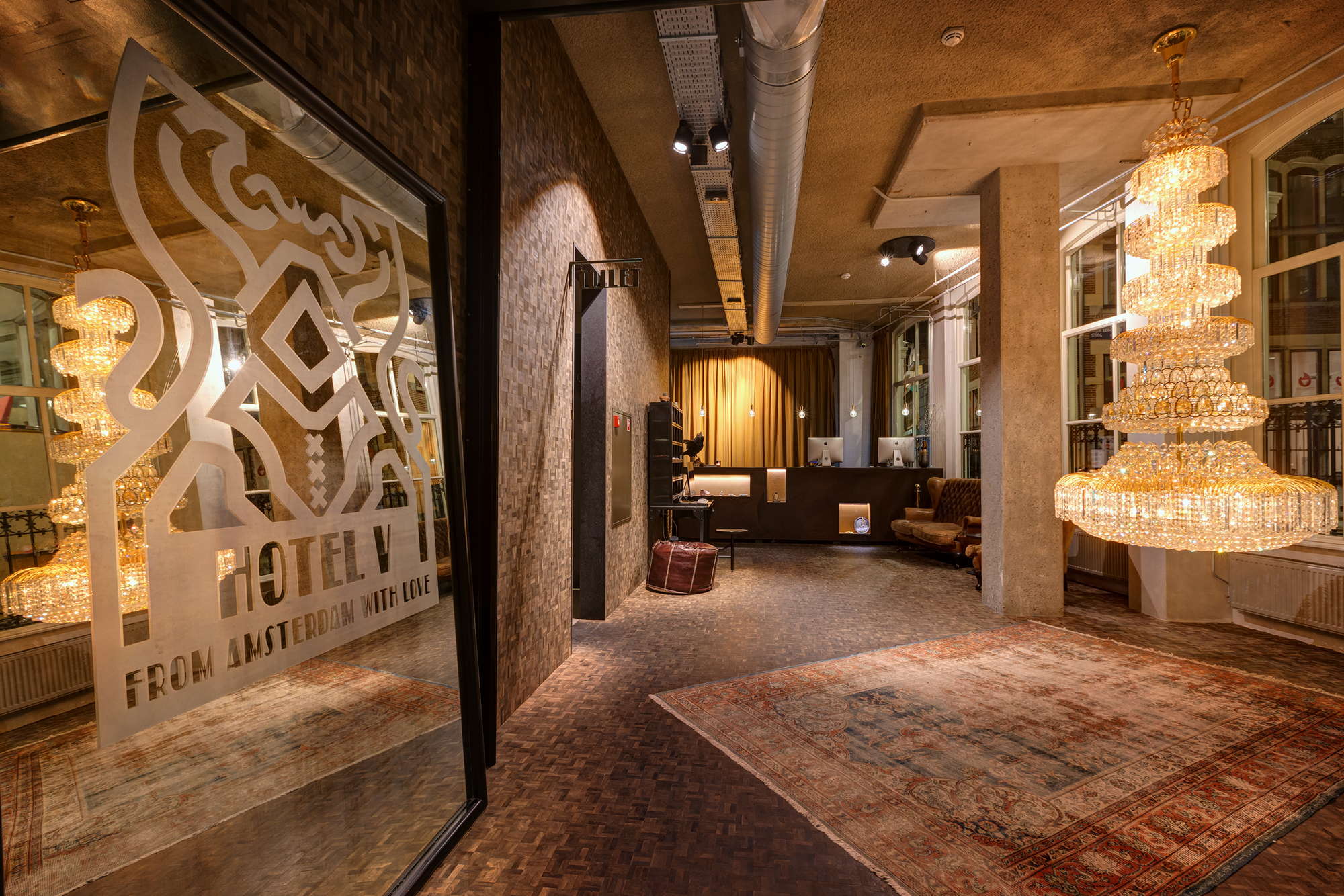 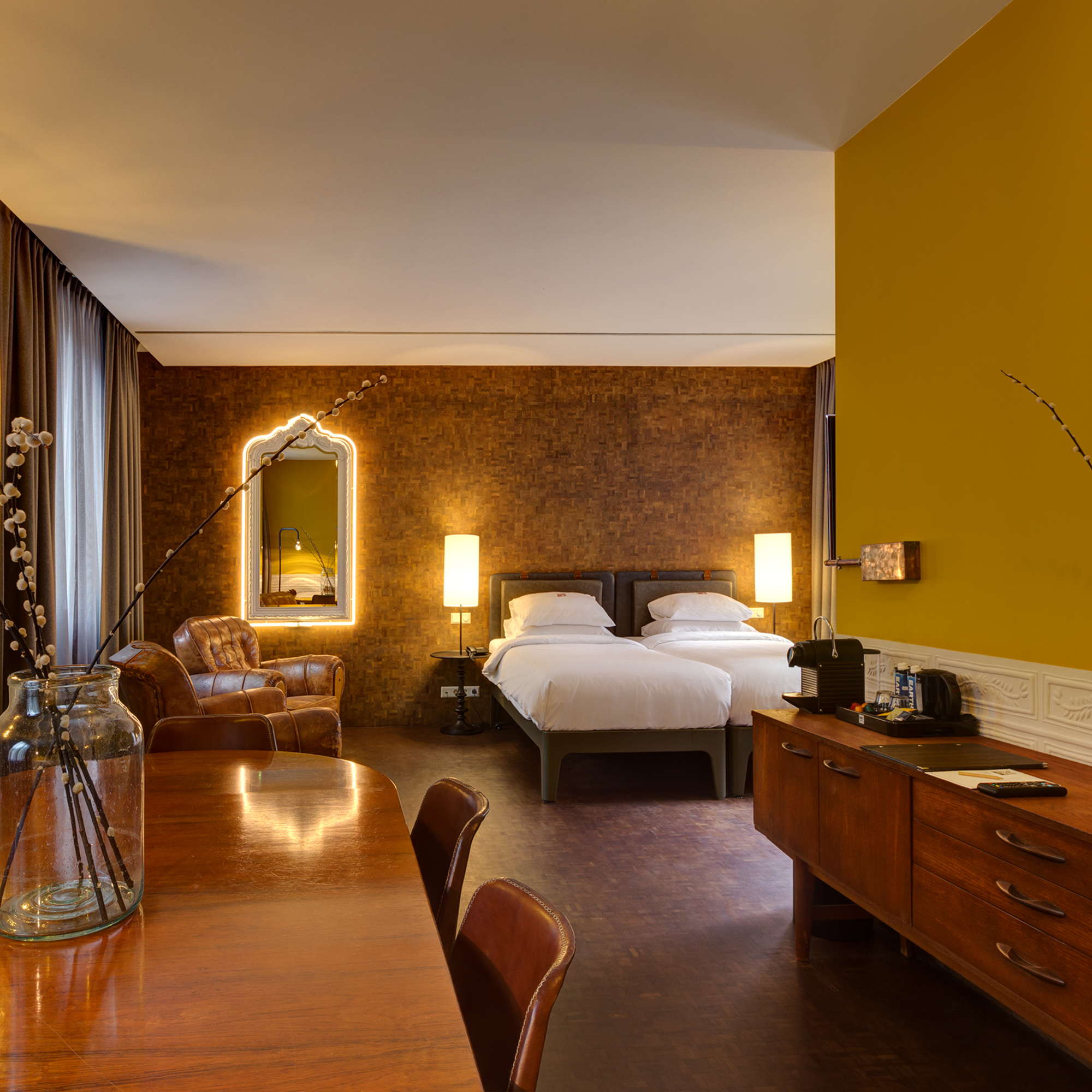