Why you need to visit this small, strange country.

Best known as the behemoth of the world’s banking industry that weighs in at the size of Rhode Island, Luxembourg does not often secure a spot on many must-see lists. For travelers that are curious to know what in the world this country is all about, Luxembourg offers a few odd yet enjoyable features that make it worth visiting on any European adventure. 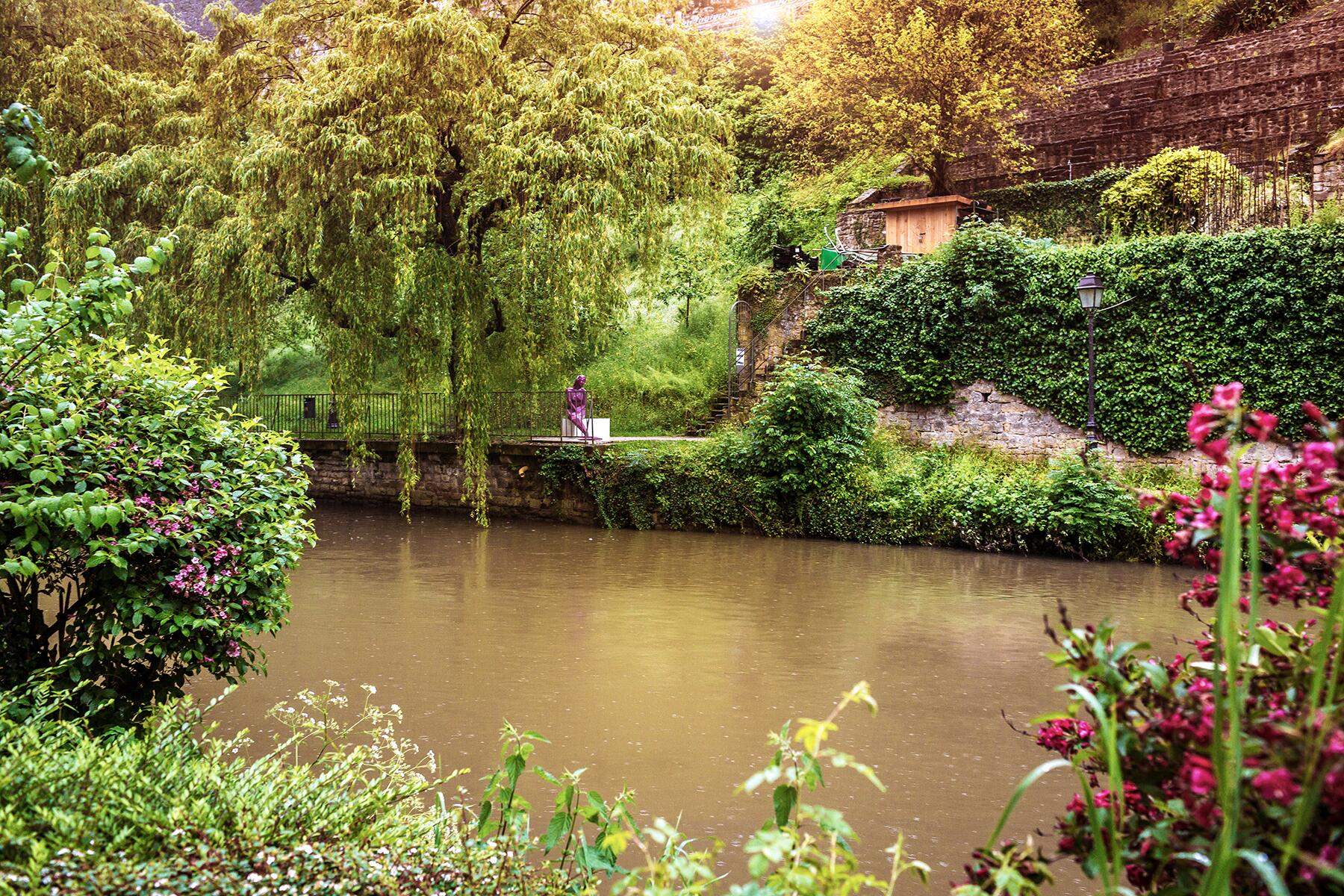 Mermaid Folklore in a Land-Locked Country

The story of Melusina, a well-known folktale throughout the Low Countries and nearby France, has a special place in Luxembourg’s history despite the country’s lack of a substantial body of water.

Before Christianity arrived in Europe, water-faeries and shape-shifters were running the show, with Melusina and her cohorts wowing the populace with their marine-based magic.

Luxembourg’s version of the tale begins when Count Siegfried, the first Count of Luxembourg, happened upon the beautiful Melusina when he was strolling along the Alzette River and proposed marriage. She agreed, on the condition that once a week the count give her complete privacy–no doubt a relatable request when marrying a strange man encountered on a riverbank. After many happy years together, the Count violated his promise and spied on Melusina in the tub, witnessing her mermaid alter-ego for the first time. When she discovered his betrayal, she and the tub sank into the rocky earth below.

These days, Melusina resurfaces every seven years as a beautiful woman or a serpent. She holds in her mouth a golden key, and whoever removes it will set her free and be able to claim her as their bride, a sequence of events which seem counterintuitive to the promise of freedom.

INSIDER TIPThanks to the construction of a Melusina sculpture in Luxembourg City, everyone can catch a glimpse of the famous mermaid without any sinking any tubs. 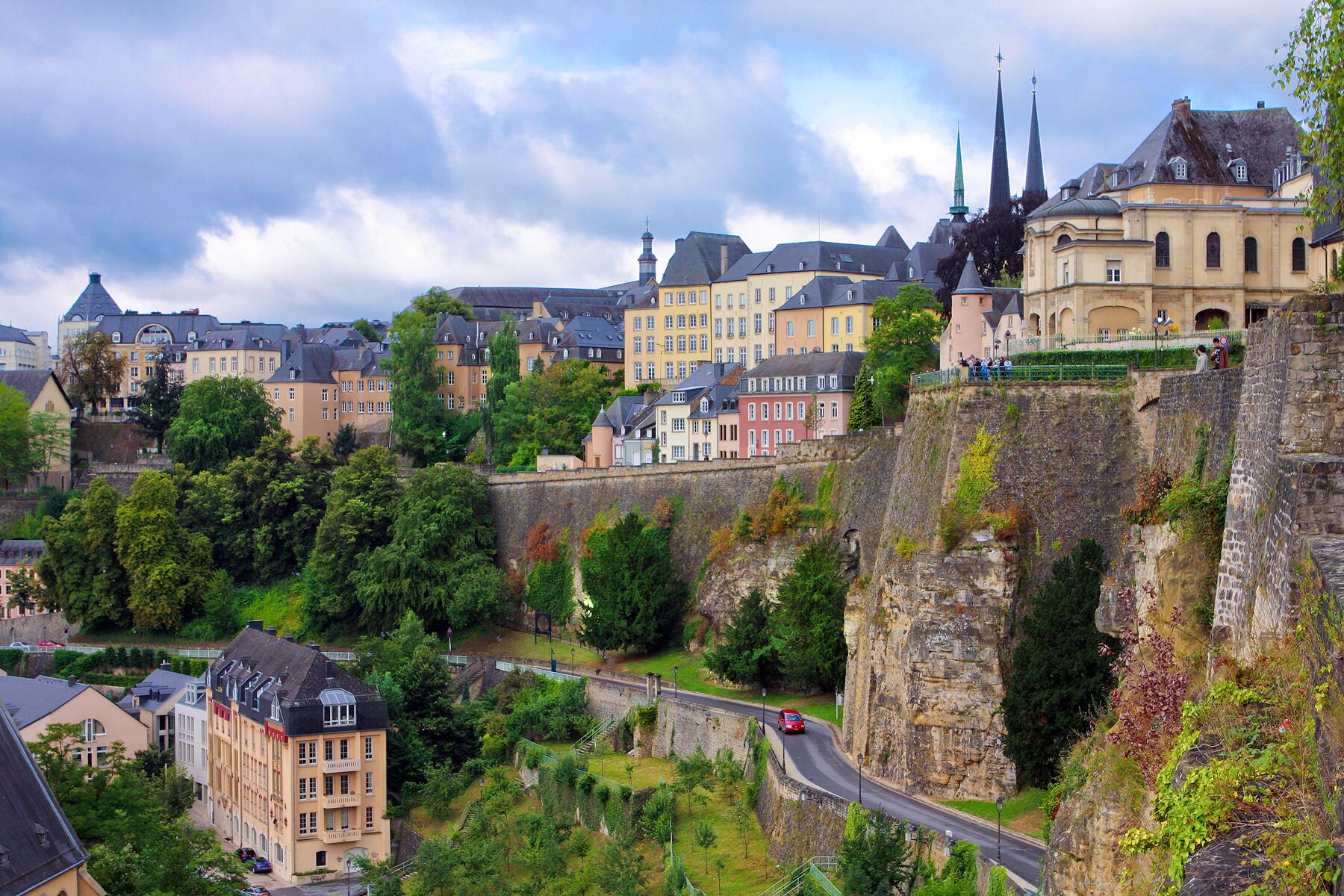 Topography Unlike Any Other

Named a UNESCO World Heritage site due to its long history as one of the greatest fortifications in Europe, Luxembourg City sits atop a rocky plateau encircled by a deep gorge. The multi-tiered quality of the city can be odd to navigate but is uniquely picturesque, with winding roads and paths providing new perspectives around every turn. Small portions of the old fortress walls remain, along with 17 kilometers of underground tunnels from the old days of invader thwarting.

At the bottom of the gorge is the winding Alzette River, where the previously hard-to-reach villages of Clausen and the Grund can be found. Thanks to an elevator that moves people from the city center straight down into the depths of the gorge, these areas are now easily accessible and have become trendy hot spots for breweries, restaurants, and nightlife.

INSIDER TIPIf you are in the city center and you cross a bridge, you have left the city!

Luxembourg boasts their fair share of boutique hotels, luxury digs, and recognizable brands, but the trend toward eco-lodging and glamping has been fully embraced by the country, resulting in more creative accommodations that are comfortable, modern, and embedded within the natural world.

Opened in 2019, Péitche Lauer Ecolodge‘s cozy riverside huts bear a striking resemblance to morel mushrooms. Escher Bamhaiser‘s three treetop guesthouses overlook an animal park, where guests can relax in a treetop and watch goats, rabbits, and deer frolic below. Home-sharing sites also rent off-beat crash pads, such as a refurbished concrete fort hidden in the middle of a dense forest.

INSIDER TIPDue to its small size, the countryside of Luxembourg can be easily traversed and explored via car or bicycle. Dotted with small towns, historical sites, wineries, and hiking trails, shacking up in the countryside immersed in nature is how best to enjoy what the country has to offer. 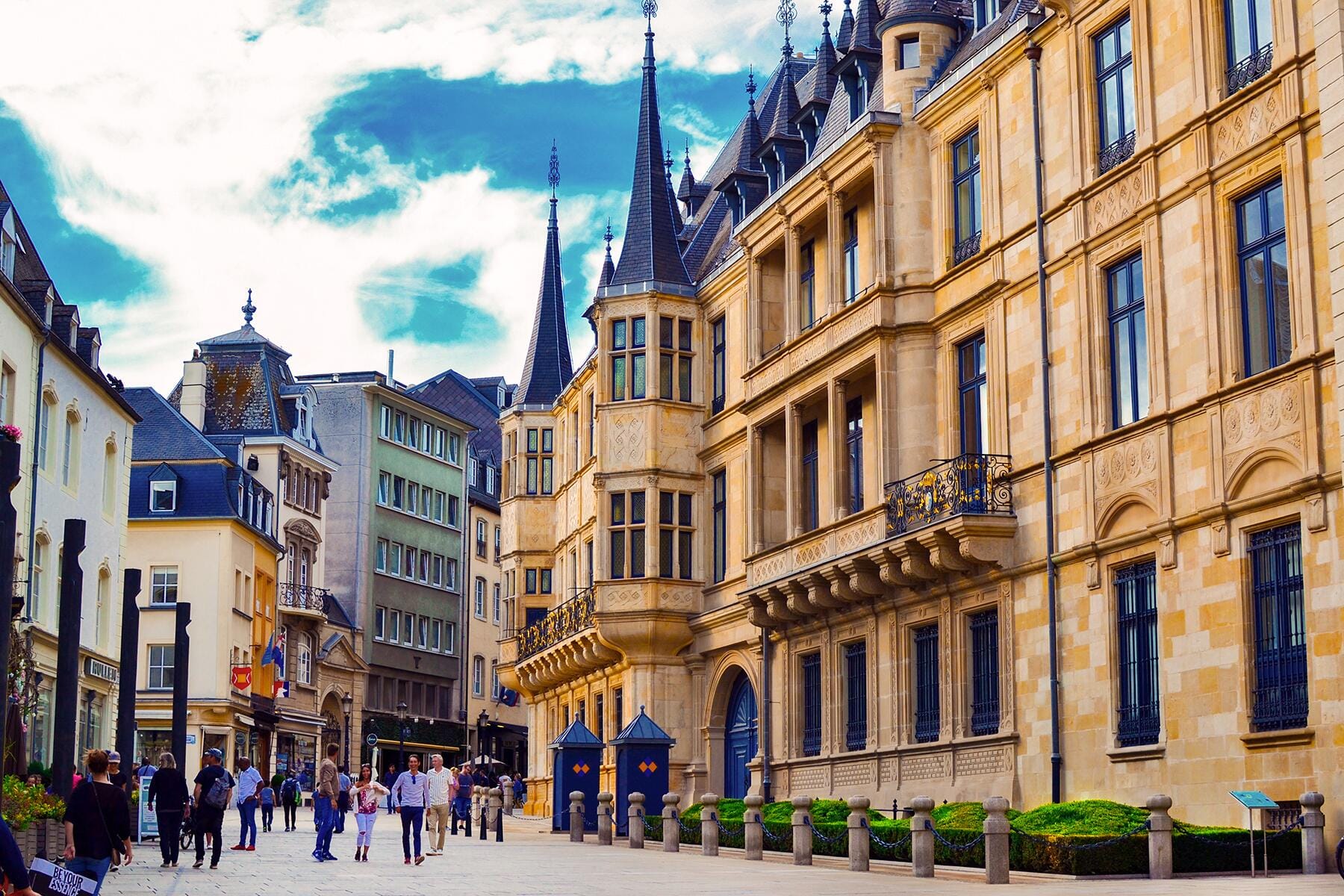 It’s More Affordable on the Weekends

In most cities, the weekend signals higher prices, booked hotels, and busy restaurants. In Luxembourg, the weekend elicits the opposite effect—lower-priced, plentiful accommodation, more availability for reservations at popular restaurants, and open hours at museums and shops.

The weekdays are more crowded in Luxembourg, as half of the country’s workforce commutes in from neighboring countries to work in banking and finance. During the weekend, Luxembourg is left for the enjoyment of locals and tourists.

INSIDER TIPLuxembourg City is often a short train trip away from nearby popular destinations—from Paris, it is a two-hour ride. 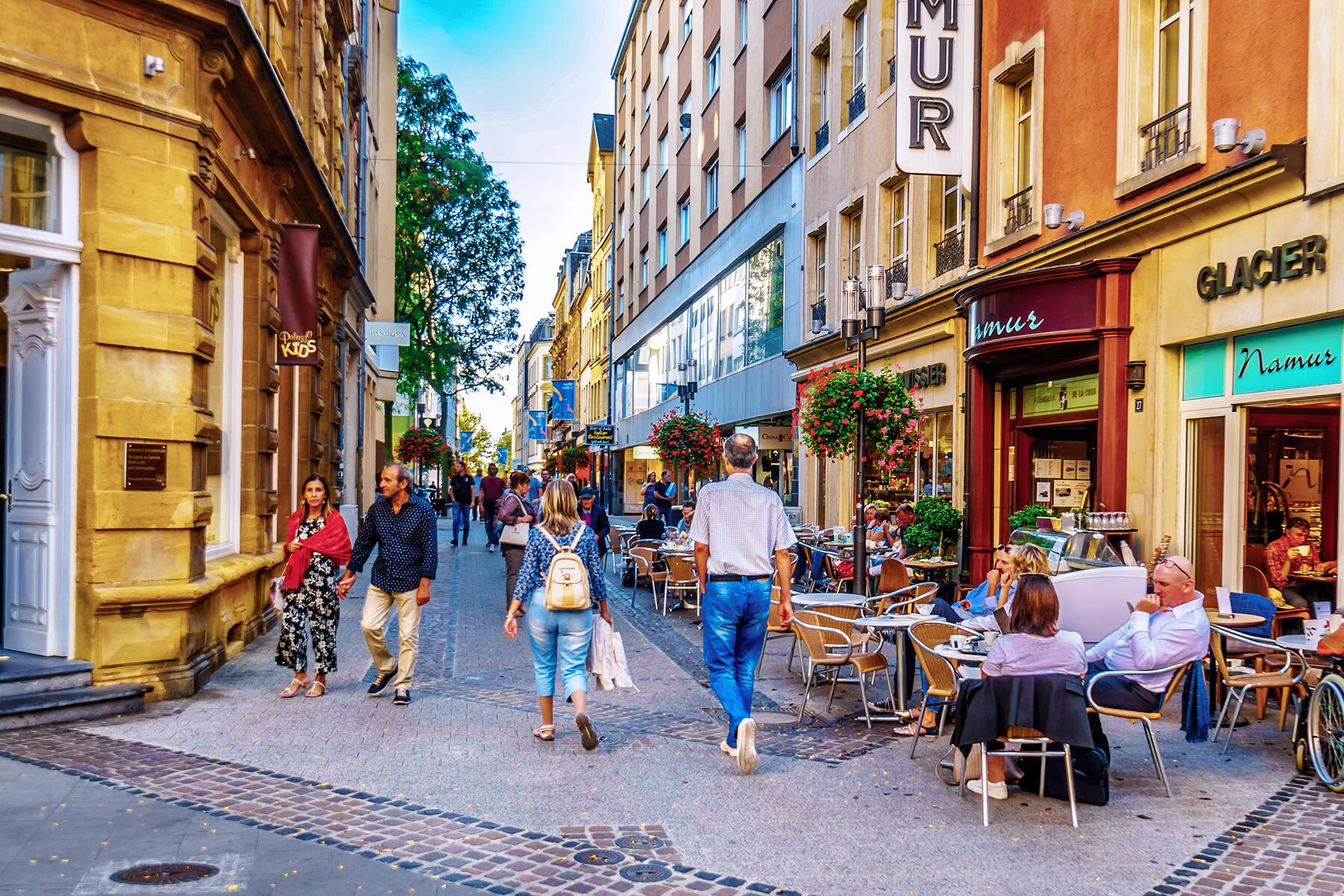 Royals Walk Among Them

There is a royal family in Luxembourg, and although these royals don’t possess the international visibility of other European monarchies, Luxembourgers know and love them all the same. Luxembourg’s royals tend to keep a lower profile, limiting the media’s scrutiny of family drama and avoiding ostentatious displays of wealth. Keeping it real in such a tiny city doesn’t leave much room for retreating from the public eye, and these royals can be spotted out and about, living their lives in public alongside the commoners. 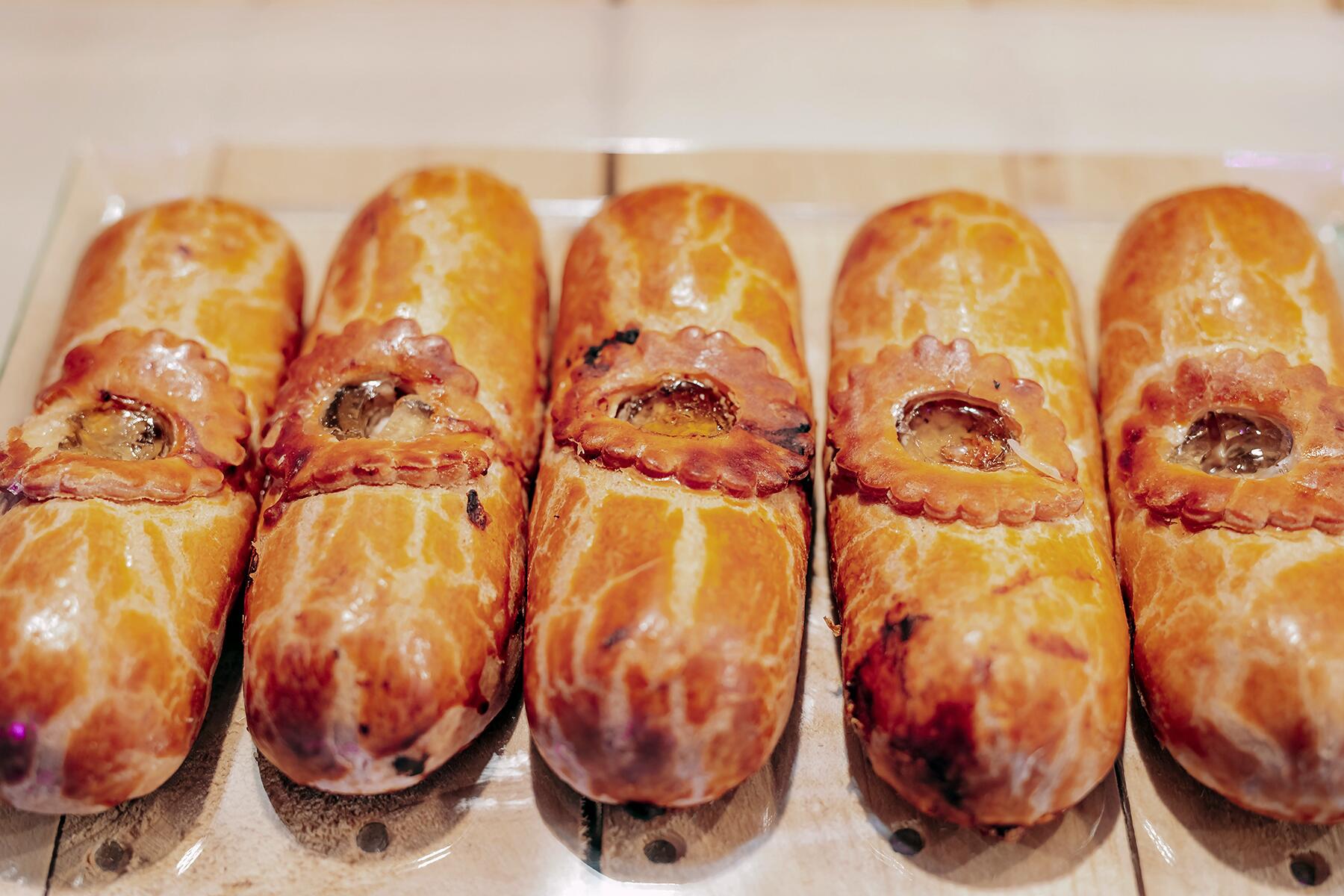 Even those well-versed in a number of European cuisines may be unfamiliar with the meat-centric dishes that, while common in Luxembourg, are likely harder to come by outside of the Grand Duchy.

Rieslingngpaschtit is a meat pie that looks less like a pie and more like a small savory submarine. Pork pate is covered with a Reisling aspic (jelly that is made with wine and meat stock), wrapped in dough and baked, resulting in a gelatinous, meat-filled pastry treat. A cold meat salad called Feierstengszalot is a popular appetizer on many Luxembourg menus, and the ingredients are similar to a steak tartare, except the meat and eggs are cooked instead of raw. One of the most famous Luxembourgish dishes is the Bouneschlupp—a meaty green bean soup made with potatoes, bacon, and onions, similar to a very green stew. The national dish is Judd mat Gaardebounen, a smoked pork neck with broad beans. Luxembourg produces a mean broad bean, and this dish is one of Luxembourg’s finest. 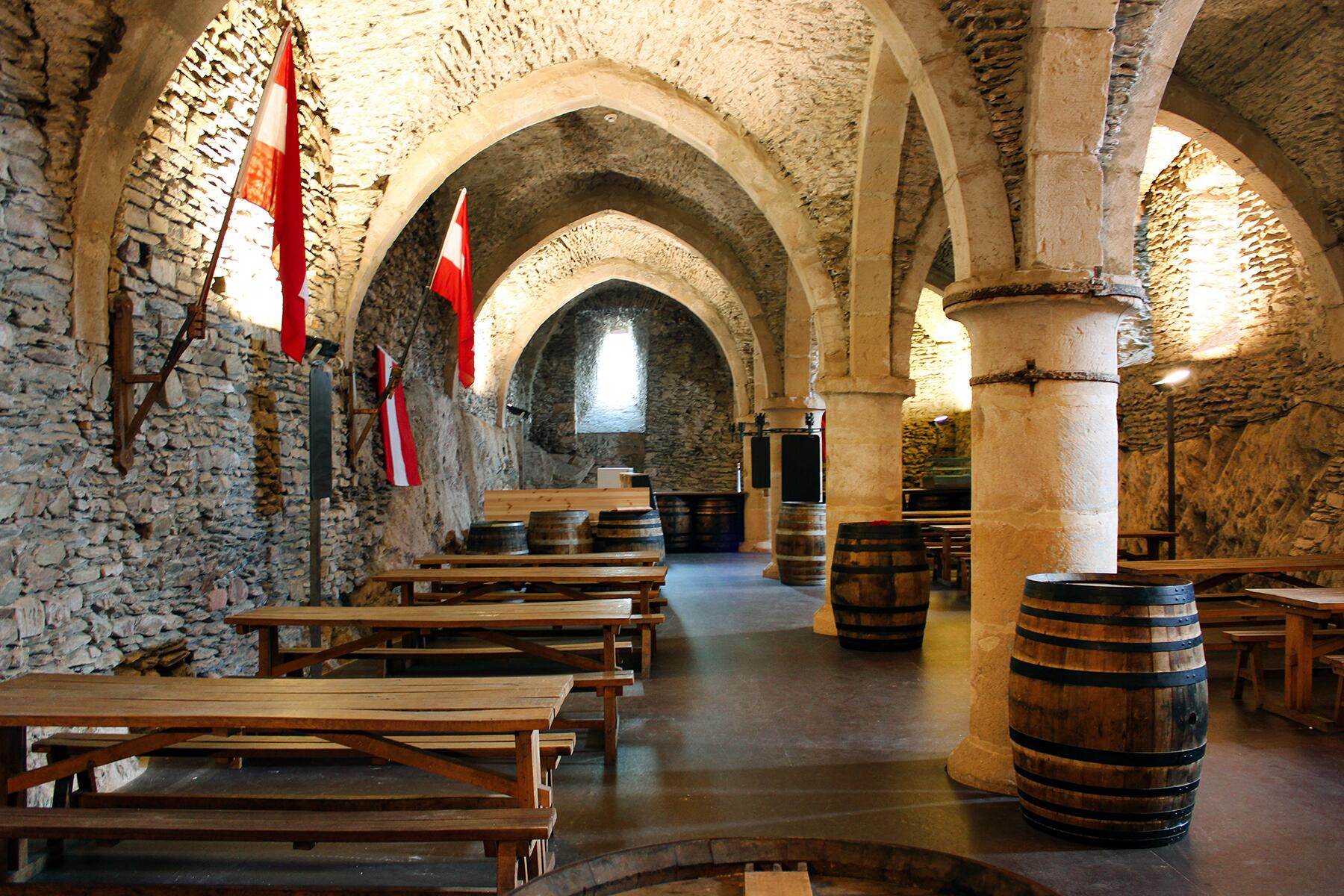 Luxembourg may not be able to claim outright ownership of many cultural commodities, but a range of influences from surrounding countries come together to create Luxembourg’s very own particular style.

The nightlife is strongly influenced by the English, with rowdy, beer-sloshed pubs overflowing into the streets until the wee hours. The cuisine tilts toward the gastronomie of the French, but in impressionable Luxembourg, the portions are more in line with the Germans, consisting of heartier and heavier meat-centric meals.

Luxembourg’s population is incredibly varied, with 170 different nationalities calling it home. To accommodate this confluence of cultures, the majority of Luxembourgers are able to speak multiple languages. Most are trilingual, but some can be fluent in as many as five languages. 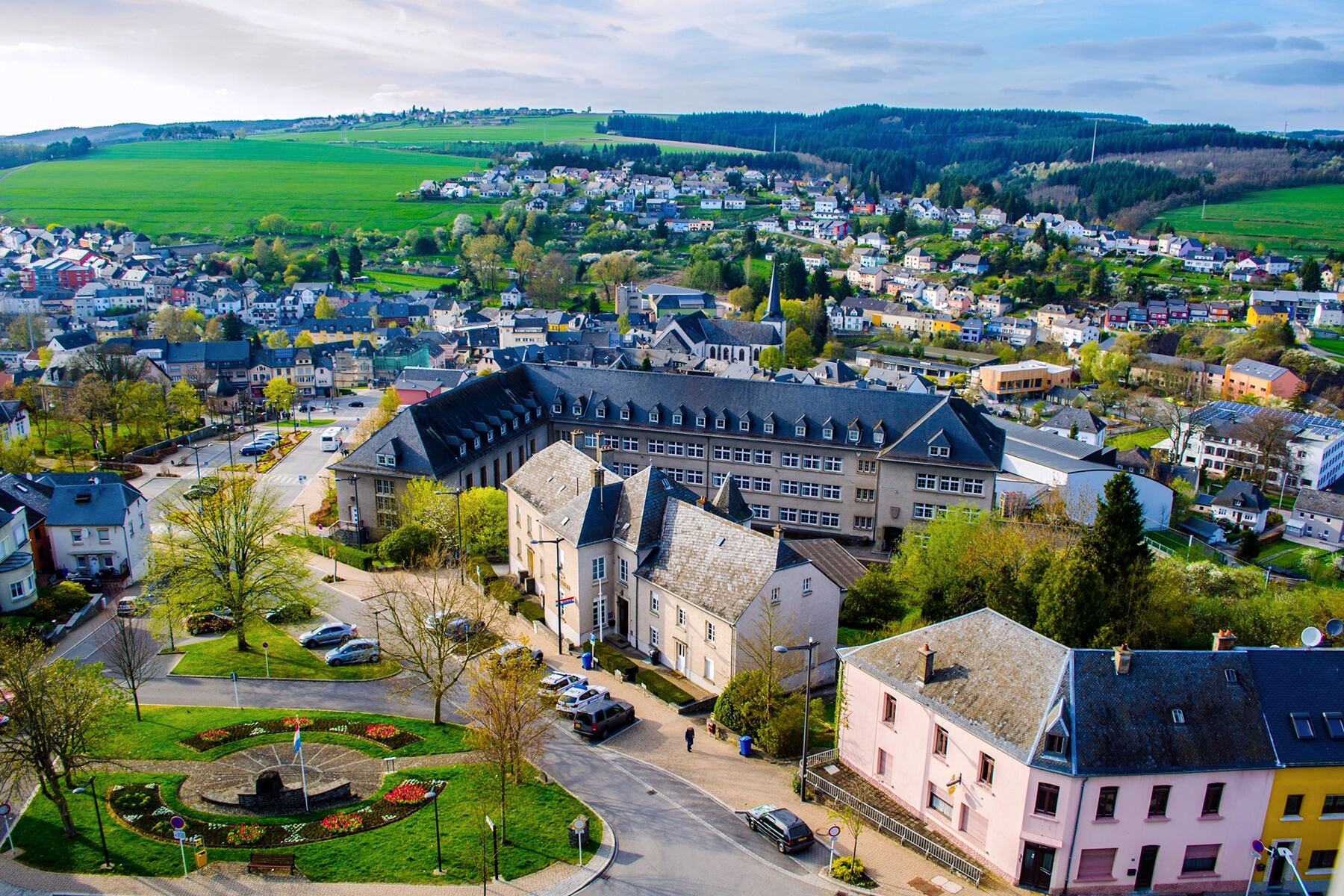 As the outlook on United Statesians continues to sour around the world, Luxembourg is still savoring the flavor. Stemming from events that happened around 80 years ago in World War Two, Luxembourg continues to hold Americans in high regard.

The Battle of the Bulge, partly fought in Luxembourg, was one of the bloodiest battles of the war and the final push toward the demise of the German army. The historical significance of Luxembourg as a pivotal battleground is evident in the many historical sites throughout the country. Wartime attractions draw many visitors and plenty of Americans who want to see General Patton’s grave or the Battle of the Bulge Museum for themselves, and these hallowed grounds help to keep the Second World War in the spotlight of Luxembourg’s history. 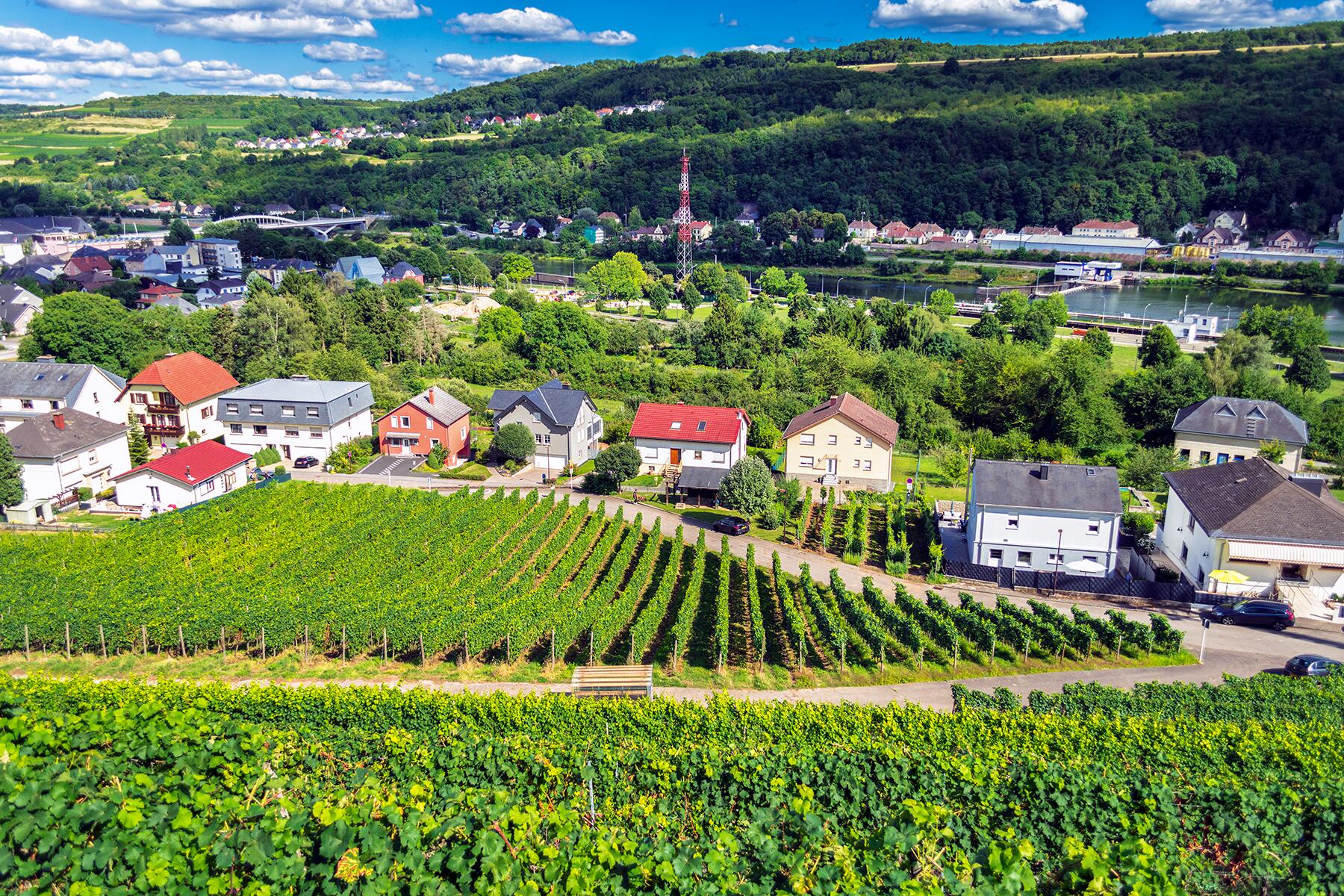 Champagne may be the most popular sparkling wine in the world, but according to the Concours National des Crémants, it is not always the best. Despite its small size, Luxembourg has successfully taken on one of the world’s most illustrious wine-producing countries and beat them at their own game. In 2018, Luxembourg crémants (sparkling wines that made outside of the Champagne region) took home 17 gold medals and 9 silver medals at the national competition.

INSIDER TIPWhen wining and dining in Luxembourg, ordering a kippchen will prompt the delivery of a delightfully tasty glass of locally-produced, affordable bubbles. 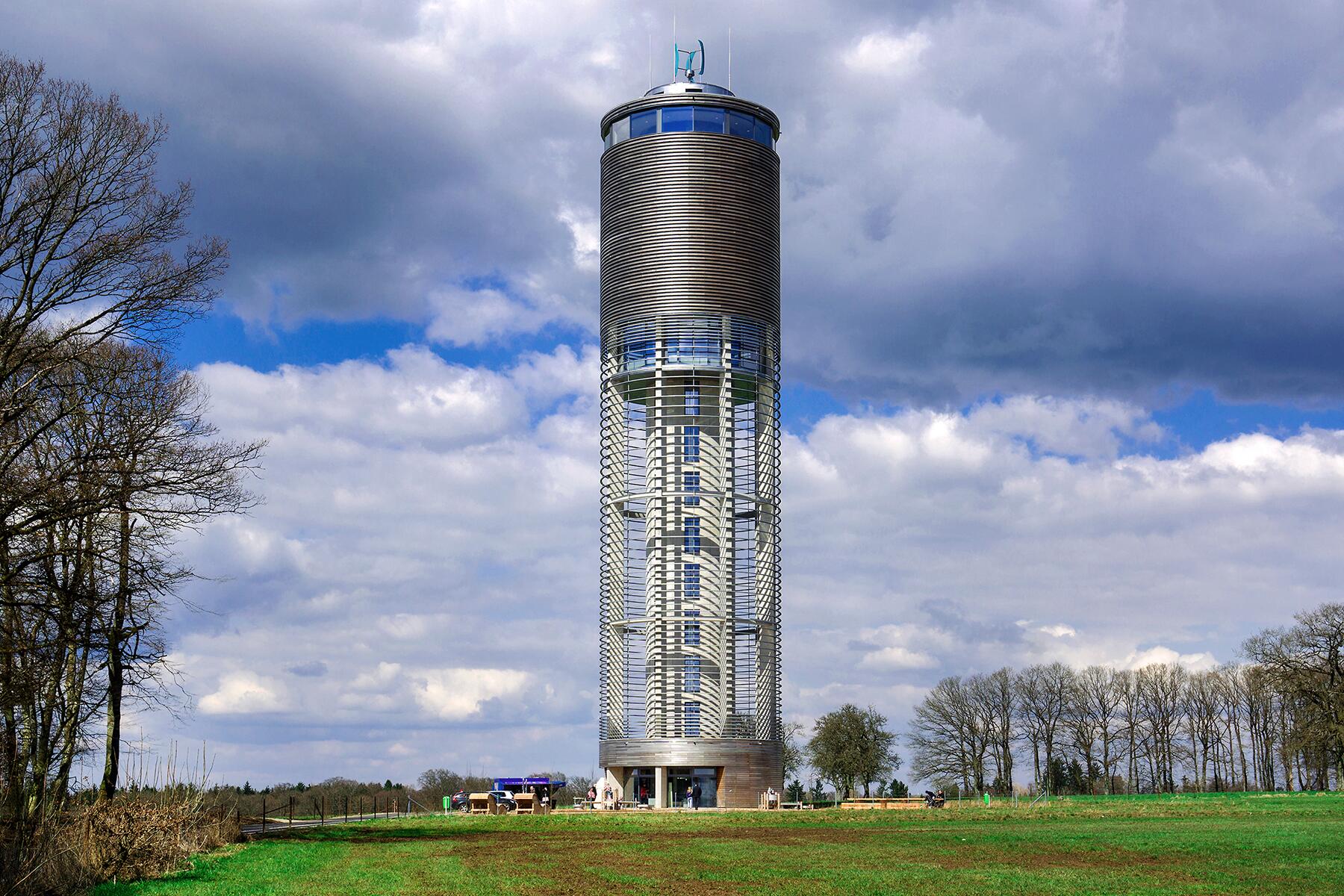 Learn About Water in a Land-Locked Country

Get educated about water from inside the bowels of the 55-meter high Aquatower. The refurbished water tower houses a water and geology exhibition where visitors can refresh their knowledge of the life-giving liquid. Located in Berdorf, a region known in Luxembourg as “Little Switzerland”, the views from the top of the tower reveal the beauty of terrain that is often compared to that of the Alps.

INSIDER TIPNot far from Berdorf is the Schiessentümpel waterfall, which, much like Luxembourg, is very small but worth a visit as long as you’re nearby.