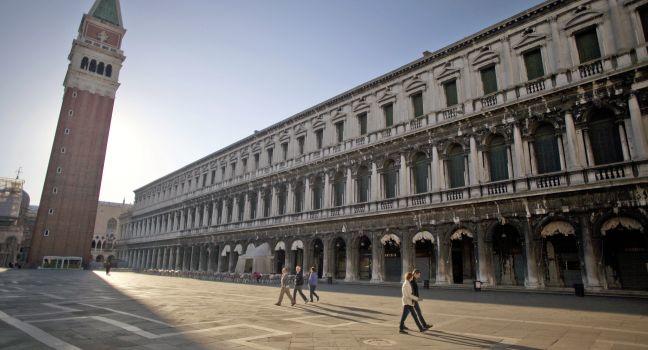 Construction of Venice's famous brick bell tower (325 feet tall, plus the angel) began in the 9th century; it took on its present form in 1514. During the 15th century, the tower was used as a place of punishment: immoral clerics were suspended in wooden cages from the tower, some forced to subsist on bread and water for as long as a year; others were left to starve. In 1902, the tower unexpectedly collapsed, taking with it Jacopo Sansovino's marble loggia (1537–49) at its base. The largest original bell, called the Marangona, survived. The crushed loggia was promptly reconstructed, and the new tower, rebuilt to the old plan, reopened in 1912. Today, on a clear day the stunning view includes the Lido, the lagoon, and the mainland as far as the Alps, but strangely enough, none of the myriad canals that snake through the city.

Book an Experience at Venice VIEW ALL