Marino was already struggling to find a successor, and then lockdown began in Italy.

Every day since he was 22 years old, Marino Menegazzo has woken up, headed to his workshop, picked up an eight-kilo mallet, and relentlessly beaten thick blocks of gold with it. For two hours, he administers around 30,000 blows to the precious metal, until it’s flattened into a barely-there piece of foil weighing just 0.002 grams–200 times thinner than human hair.

It’s thankless work, which is why no one does it anymore: Marino, now 66 years old, is the last goldbeater in the world. This long-dying craft was once a common profession in Venice; at its peak, there were 340 gold beaters in the city. Now it’s just Marino, who works from his historic workshop in the Cannaregio district with his business partners: twin daughters, Eleonora and Sara, and wife, Sabrina.

But business for the goldbeater has long been a bit shaky–Marino’s artisan prices are greatly undercut by his competitors, who automate the painstaking process in far-off factories. And just as Marino was eyeing retirement, the coronavirus crisis hit. Plummeting demand from crucial markets, broken supply chains, and falling gold prices mean Marino may not be able to hang up his mallet as soon as he’d hoped.

This is to say nothing of Marino’s other big problem: finding a successor. “The last guy we trained lasted three days,” he tells me, a tight-lipped grin creeping across his sun-wrinkled face. I’m looking at the famous goldbeater through an iPhone screen–his daughter, Eleanora, is showing me around the workshop over Facetime. Named for Marino’s father-in-law–Mario Berta Battiloro, the original owner and a goldbeater himself–the workshop is housed in a centuries-old building that once belonged to the ultimate Venetian, 16th-century painter Titian.

But now, four centuries later, it’s Marino’s. He took control of the workshop in 1992 after working as Mario’s apprentice for three decades. Goldbeating has been in the family since 1926 when Mario revived the craft and set up the business. Even then, goldbeaters were practically an extinct species; the grueling nature of the work meant that young Venetians weren’t exactly flocking to the profession. 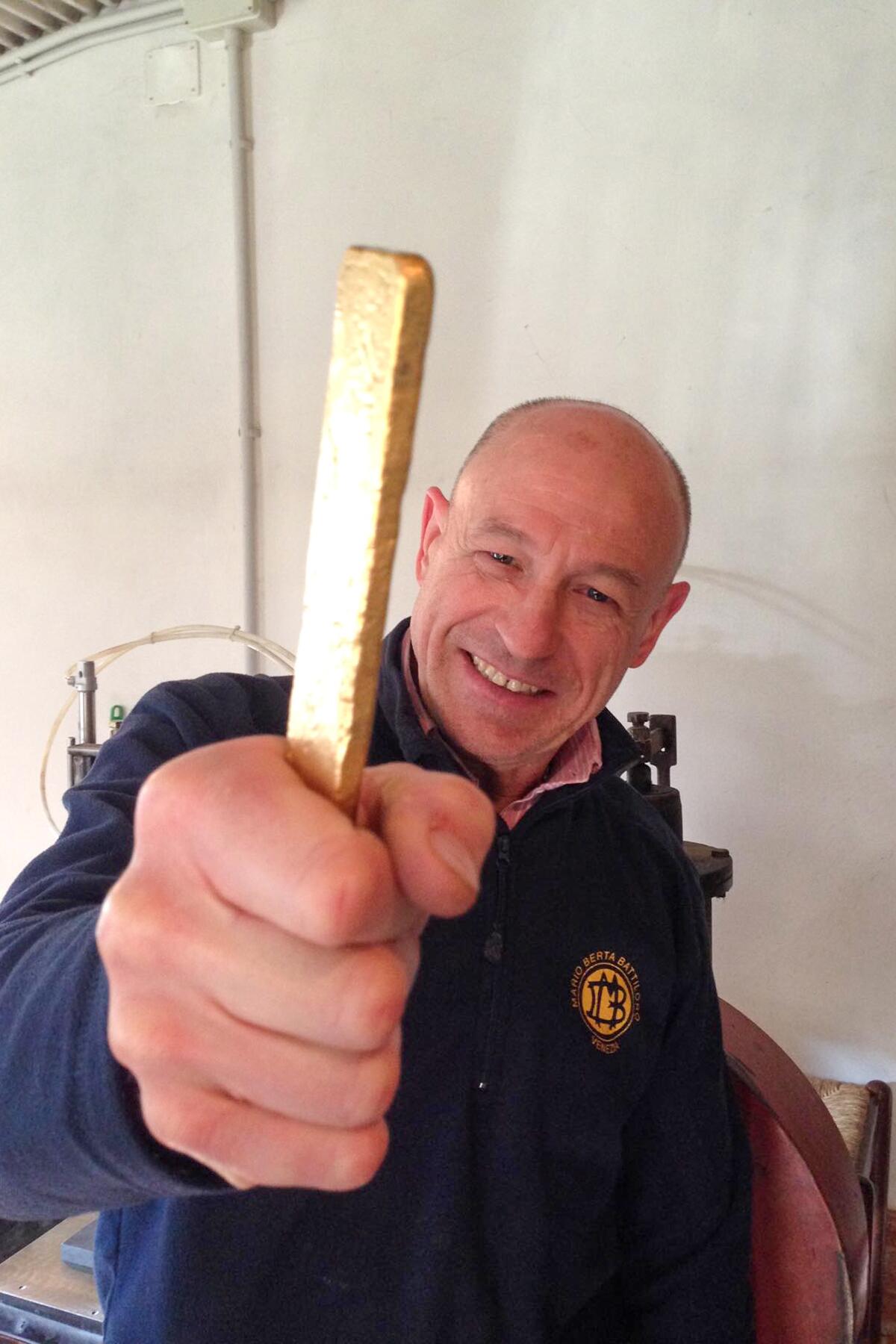 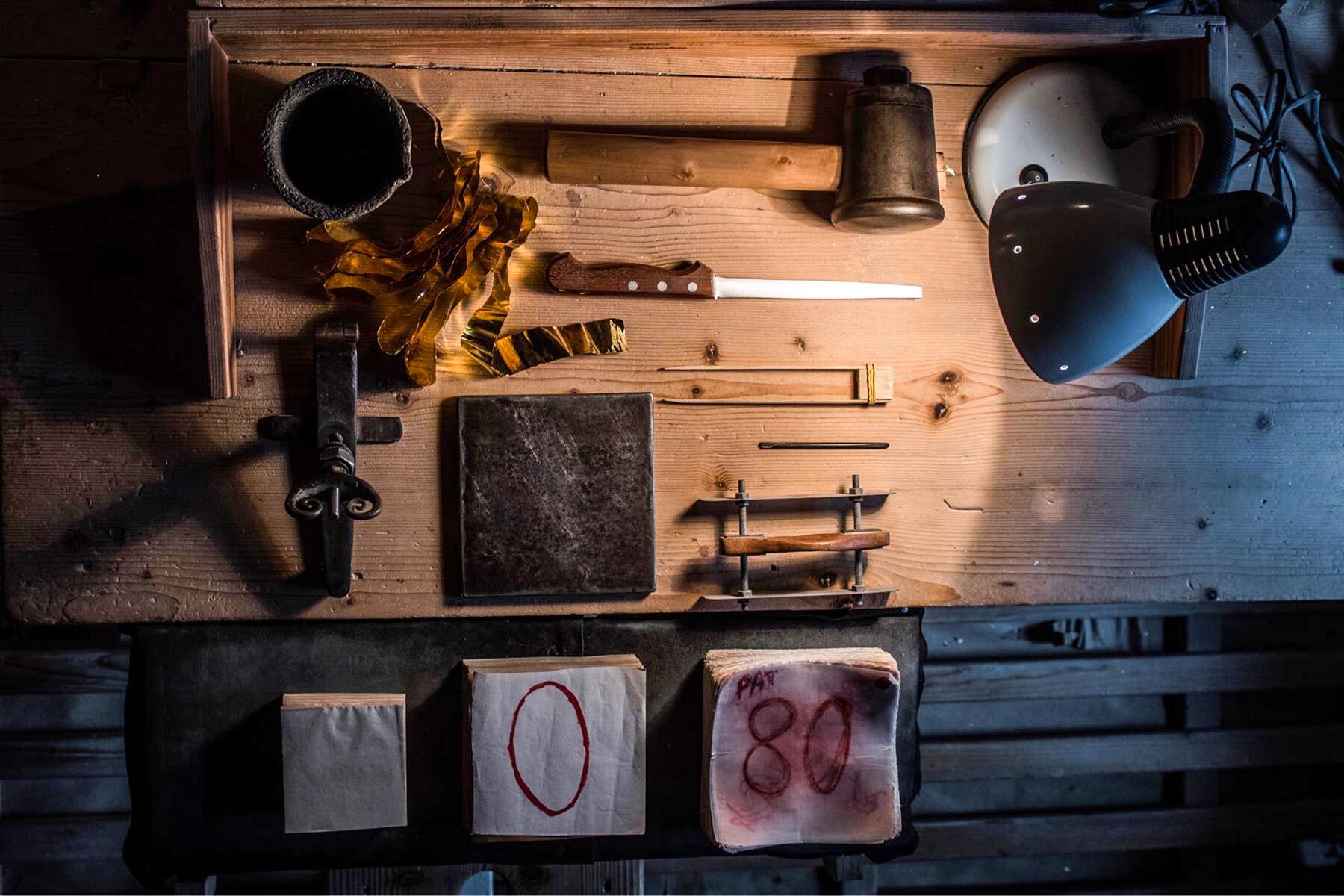 Luckily, Marino took to it right away. “I had been working as a fruit and vegetable seller before I met my wife,” he says. “Her father took me under his wing and showed me the craft. I loved it immediately–the meditative quality of the work, the fact that I get to use my hands.”

Speaking of his hands, Marino’s mitts have taken quite the beating over the years. They are often riddled with painful calluses; the goldbeater has had to have two operations to remove tumors caused by the vibrations that are sent through his right hand as he brings down the mallet. It’s no wonder the other guy didn’t last.

“You have to truly love it to make it in this profession,” Marino says. As for his daughters, Marino explains that, “Only men can be goldbeaters–women don’t have the arm strength. Eleanora tried to pick up a three-kilo mallet and could barely manage it!”

But if passion–and being a man–are the base requirements, Marino passes with flying colors. When I watch him work, it’s clear that a lot of love goes into his craft. Eleanora carries her iPhone over to reveal a mighty, 24-karat, gold-covered door that conceals the goldbeater’s inner sanctum. He stands behind a tall marble block, wielding his eight-kilo mallet–the same one his father-in-law used in 1926–with his right hand and holding the bundle of gold in place with the other. Marino brings the impossibly heavy tool down in an easy rhythm–each time, the impact thunders through the phone. He counts the blows as he works, turning the bundle around with his left hand to ensure the entire surface gets an even beating.

Before the gold lands on Marino’s marble block, it’s melted down and stretched into ribbons by a mechanical roller–also the same one the family has used since the 20s. It’s then flattened by a machine (the only one in the workshop), and quartered by Sabrina using a knife. Once Marino beats it down, it’s passed back to Eleanora and Sara, who cut the gold leaf into various shapes and place the finished works between the pages of a 25-page libretti (booklet), which is how the gold will be shipped out. 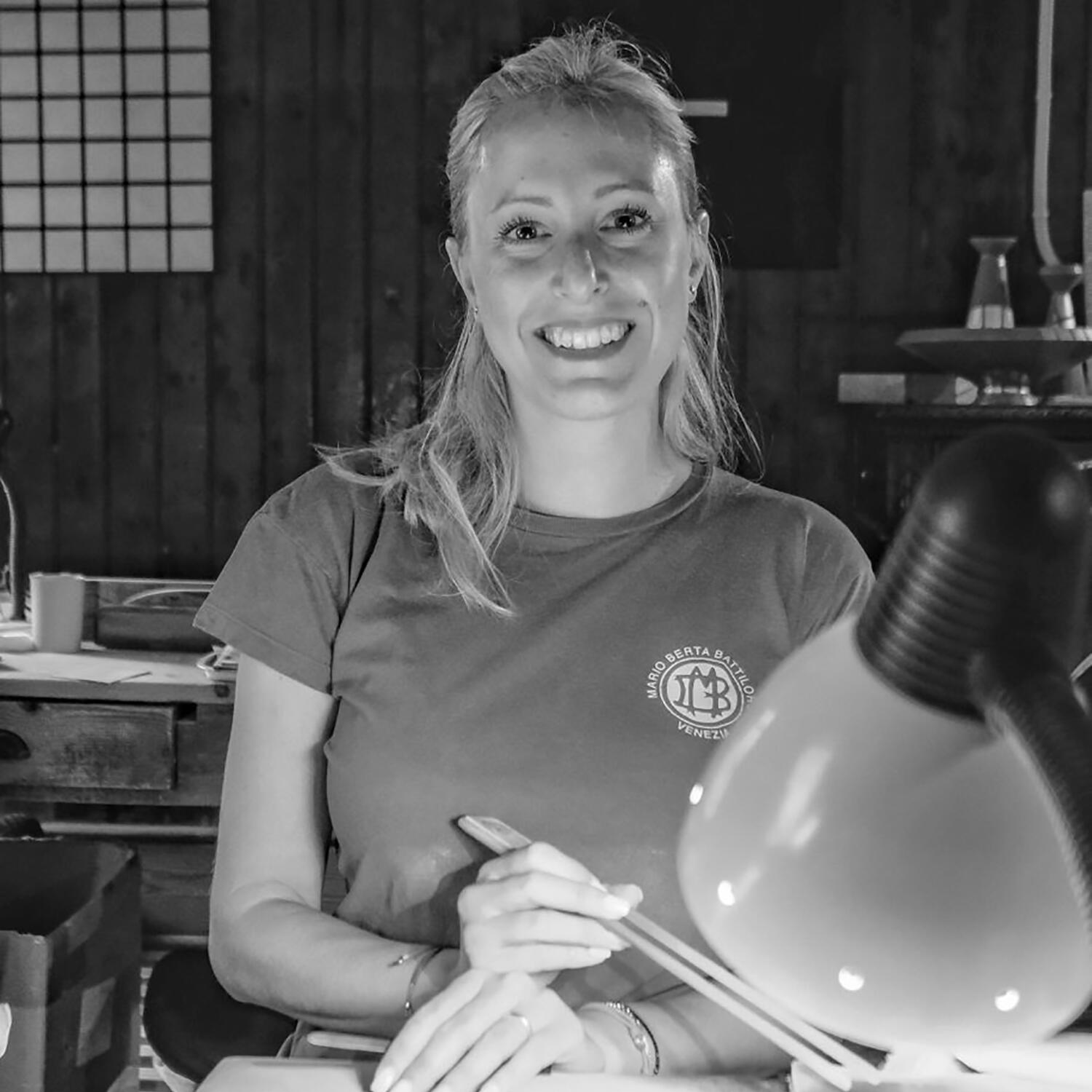 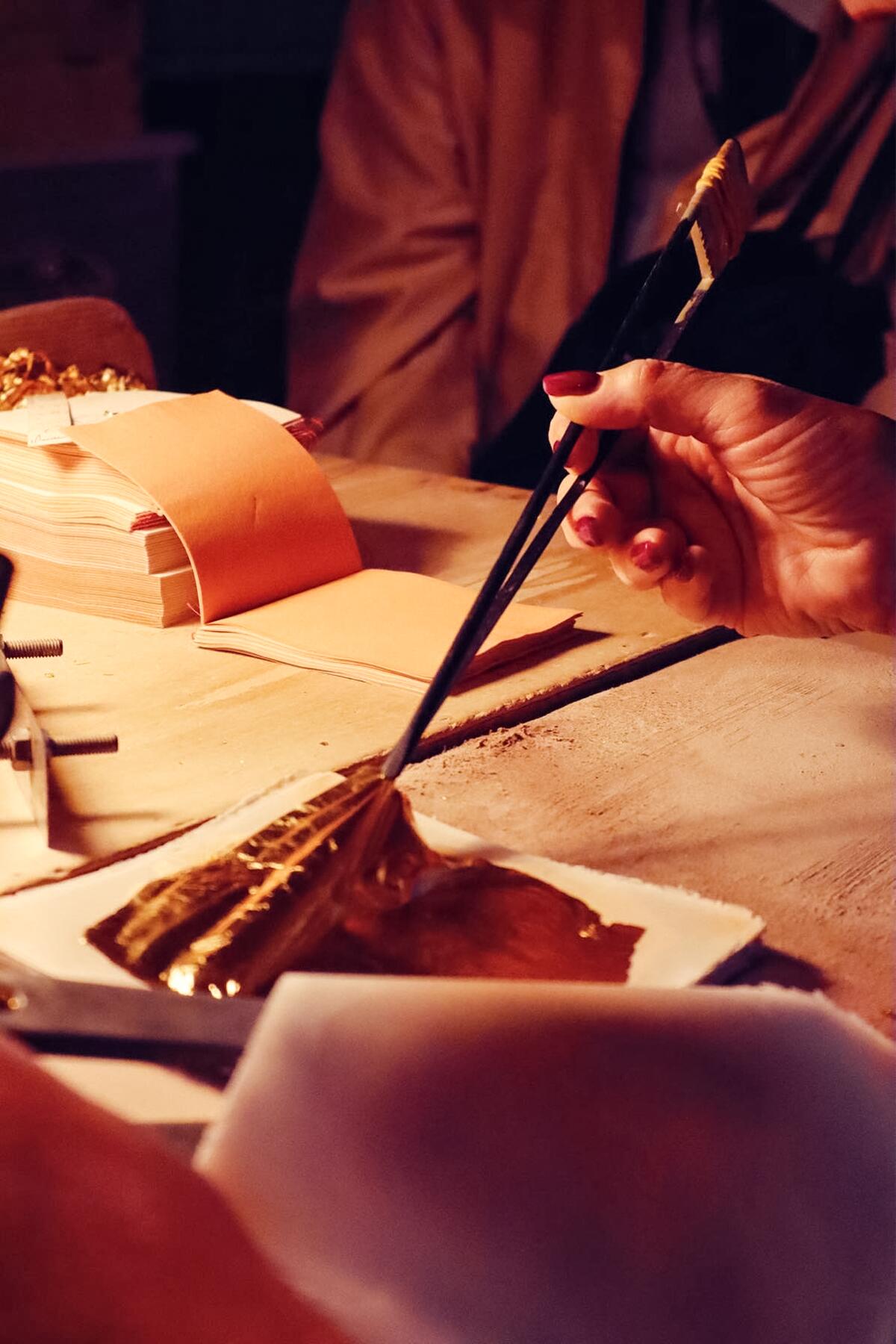 These days, though, the libretti doesn’t tend to travel very far–since the demand from foreign buyers has waned, Marino and his family are focusing on the domestic market. They’ve also halted production on their beauty and bath products completely, instead pouring all their efforts into restoration projects. One long-distance journey their product will be making is to the U.S.–their gold will adorn the walls of the soon-to-be-reopened Washington National Cathedral.

Restoration has always been at the heart of their business–their gold leaf adorns such iconic sights as the Vatican, the Madonnina in Milan, and the Bell Tower of San Marco in Venice, to name a few–but it’s the private market where they falter. “We are artisans, and our prices reflect that,” Eleanora tells me. “We can’t compete with other companies who automate the process, so we are trying to find new solutions.”

But those potential solutions may have become a point of contention between Marino and his daughters. “We want to bring in machines, but my father refuses,” says Eleanora.

The goldbeater, sitting by her side, shakes his head resolutely. “I need to find a successor, it’s the only way to keep the business going,” he says. “It’s important that we carry on the craft of goldbeating, or it’ll be lost completely. Many years from now, I want people to know that there was a goldbeater in the 12th century, just like me.”

“Many years from now, I want people to know that there was a goldbeater in the 12th century, just like me.”

So the search for Marino’s next-in-line continues. In the meantime, the family has each other to lean on during hard times. Marino and his wife live close by to their two daughters, who both have husbands and children of their own. During Italy’s lockdown, the whole family got together frequently and helped each other through the roughest patches.

“I would often open my father’s door to find him running around the house,” says Eleanora. “Literally, just running in circles. He couldn’t keep still.”

It seems Marino’s business-minded daughters balance out Marino’s artistic temperament. “We have a good business relationship,” Eleanora tells me. “My father is the ideas guy–we discuss his vision for the business and then we make it happen.”

But when it comes to the hardest parts about working with family, Marino smiles his wry smile. “Supporting all the women in my life.”