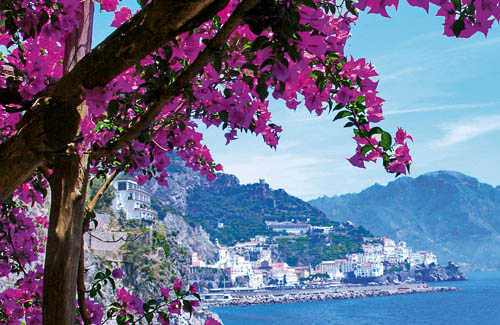 Italy’s Campania region is a patch of paradise I discovered while editing “Fodor’s Amalfi Coast.” Its heavenly rewards include sunny Sorrento, captivating Capri, and the mountain-meets-sea drama of the coast. On the more earthly side are the spectacular Edenic gardens of the area’s famed resort hotels. Fortunately, it’s not too late to visit palmy, balmy Campania, as the Fall season here is still Summer there. Text and Photographs by Robert I.C. Fisher

The surest way to escape the thousands drawn by the medieval ambience of Amalfi is to book a room at this famed hotel, situated atop a hillside just far enough away from the thronging crowds. The hotel’s miniature garden of Eden that drapes the hillside like a woven tapestry is home to tiny villas and romantic chalets, many with hypnotic views of the coastal areas, all nestled among paths perfect for dallying. Famous pairs of lovers who felt the first lightning bolt of connection in Caterina’s garden include Taylor and Burton and Jolie and Pitt. No wonder the Amalfitani say "Heaven can wait, we’re already there." 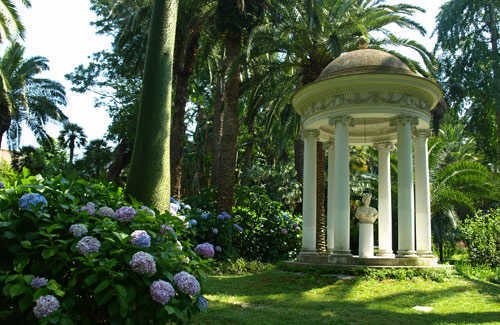 The million-dollar jackpot—unavoidably—is capital-letter Romance. Take a drop-dead sunset, the Bay of Naples and a sky echoing each other’s shades of mauve, a champagne-obligatoire supper under pale moonlight, everything softly backlit courtesy of Mt. Vesuvius, and you’re It! Incredibly lush plantings surround the Rococo villa-hotel, first built in 1792 and planted with so many rare garden species that green-thumb visitors just up and swoon. A scrim of garden paths lead to the poignant Temple of Love, erected by Count Leopoldo di Siracusa-Bourbon to commemorate his dying amour, and where one breathes the air of history along with the fragrance of flowers. 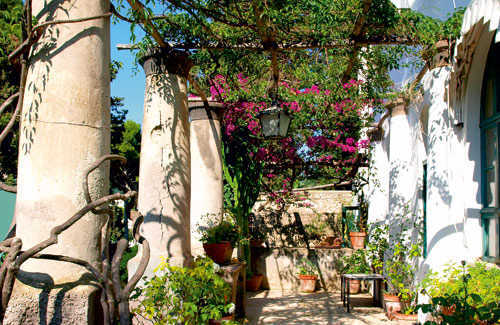 A thriving center of chic since Roman emperors came to work on their suntans, today’s imperial class—the rich and famous—come to Capri to work on theirs. La Certosella, alone among the island’s other glamorous hotels, was designed by Capri’s master architect, Edwin Cerio. Cerio was unrelenting in his devotion to native gardening techniques, and still standing are his vine-covered pergola and plots planted with lemons, oranges, and other edibles which present owner Ilaria Iacona turns into juices and jams, giving new life to ancient Caprese traditions. History, along with the roses, is in perpetual bloom here. 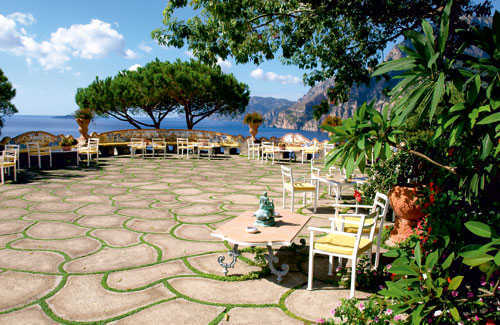 In terms of lushness, the original Garden of Eden had nothing on this Positano landmark. Due to its cliffhanger of an address (the spot, legend has it, that St. Peter first touched land in Italy), the hotel is one gigantic bouquet, with massed beds of begonias, roses, jasmines, dichondra, fuschsia, impatiens, and hibiscus all rolled out like a rug. With space so limited, many blooms in this floral parade are trained to grow (through tiny wall openings) inside. Head to the famous Grand Terrace—king among thousands of vantage points lining twisty Amalfi Drive—for the perfect view of Positano. 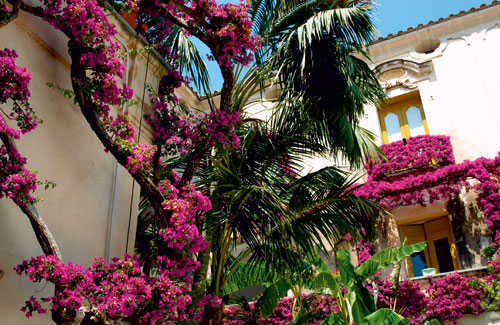 People head for popular Positano—set in a natural vertical amphitheater—as though to a hit play. The show does not disappoint, especially if you grab "front-row orchestra seats" at this hotel, set in the very heart of town. Here, on the largest patch of flat land (the rarest luxury here), a riotious congflagration of blooms—total floral bedlam—rages in the Upper Garden while Incredible Edibles are harvested in the Lower: admire the ruby red cabbage and eat it, too, at the hotel’s noted restaurant. 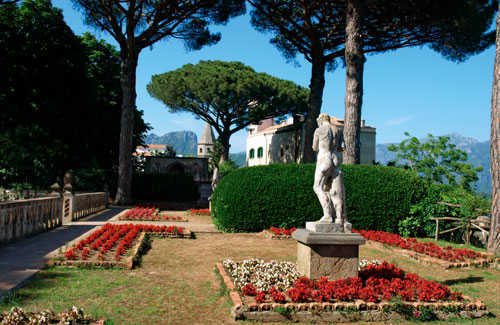 Famed as La Bellissima ("the most beautiful"), the town of Ravello was the 19th century’s honeymoon mecca—brides insisted on it as part of the marriage pact. Today, its most picturesque estate is the Villa Cimbrone, built by Lord Grimthorpe in 1908 and put on the world map when Greta Garbo trysted here (with Leopold Stokowski) in 1938. Daytimes, the garden is open to the public, drawn by its unmatched views from the world-famous Belvedere of Infinity, but a night at the villa, today one of Ravello’s most ravishing hotels, is a peaceful antidote to the crush. 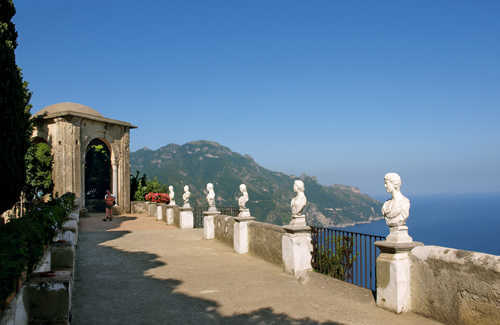 The highpoint of the Villa Cimbrone is the world-famous Belvedere of Infinity. Every blasé soul has to stand on this spectacular castle-in-the-air, where an infinity of clear, blue Campanian sky presents a sight for which the appellation "stupendous" seems too mean a term. The vista overlooks the entire Bay of Salerno and, some say, a good part of the universe. Through the softest mist, you see the sky above and the sea below. (Or is it the other way around?). 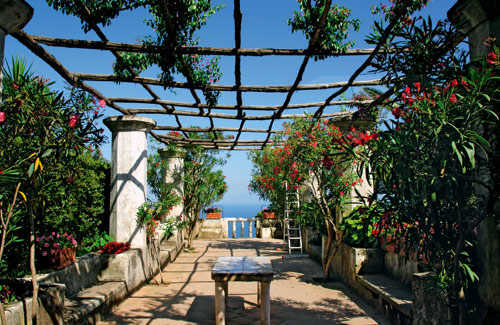 Touring the magical garden of the Villa Rufolo, known as the crown jewel of medieval Ravello, one is reminded that the concept of dolce far niente—"the sweetness of doing nothing"—is practiced as an art form in southern Italy. The time-honored recipe for the consummate healing experience? A swim in the warm sea, a simple repast, and a stay in one of the region’s famous resort hotels, many of which are set in dreamy gardens. Be warned! A longer look into my book, Close to Paradise, may lull you into that state of sweet indolence.