The Cinque Terre is usually bustling with tourists…but not lately.

Is there a more enchanting landscape than that of the verdant vineyards set upon stepped terraces leading to kaleidoscopic cliffside villages overlooking an azure sea? I certainly didn’t think so when I first set foot in Monterosso al Mare during a year-long sabbatical in 2007. This, the largest and westernmost village making up the Cinque Terre– which also includes Vernazza, Corniglia, Manarola, and Riomaggiore–has in recent years become an even more sacred destination when, in 2009, I met and married one of its locals and became a regular visitor.

During my annual summer holidays in Monterosso, it quickly became clear that my love affair with the Cinque Terre wasn’t singular. Taking lessons from the seasoned locals, I learned to navigate the hoards of day-tripping passengers arriving via train from ports in the neighboring town of La Spezia. A hotspot on the cruise itinerary, these mostly American tourists were eager to check off their bucket-lists, the Cinque Terre ranking high thanks in part to travel writer and author Rick Steves. With one main street leading to the old town, I often favor the higher paths and avoid the famed hiking trails altogether. Thankfully, the private beach clubs lining the Mediterranean provide respite from the masses, and once evening falls, the intimacy of the village returns.

“Italians have been vacationing in the Cinque Terre since the 1960s, with the first international tourists coming from Germany and Switzerland,” shared my Monterosso-born husband Giorgio Poggi. “They came to hike the trails between the villages during the fall and spring months.” It wasn’t until the early ’90s that young backpacking Americans began arriving in droves, provoked by Steves’ enticing depictions of the region. By 1997, with tourism on the rise, the region was added to the UNESCO World Heritage List to preserve the villages and the man-made terraced vineyards. Many of the locals abandoned traditional occupations including sailing and fishing, opting instead to run B&Bs and offer private boat tours to cater to the increase in tourism.

Rick Steves shares his thoughts about this not-so-secret locale that remains on his list of top travel destinations. “As the Cinque Terre has morphed into a popular and affluent slice of Italy’s tourism industry I find that it’s as worthy of a stop as ever. Is it still the ‘undiscovered back door’ I fell in love with in the ’70s? No. Are the crowds happy to visit the Cinque Terre? Yes. Do I still dream of lazy days enjoying that best stretch of the Italian Riviera? Absolutely.”

Following the millennium, the Cinque Terre became a must-see destination for tourists from around the world. Ranking as one of the most beautiful places in Europe (and in the world if you ask me), globetrotters numbered up to 2.5 million annually from May to October. While the thriving tourism was welcomed by business owners, it consequently began to take its toll, both on the over-worked locals and on their fragile centuries-old landscape. 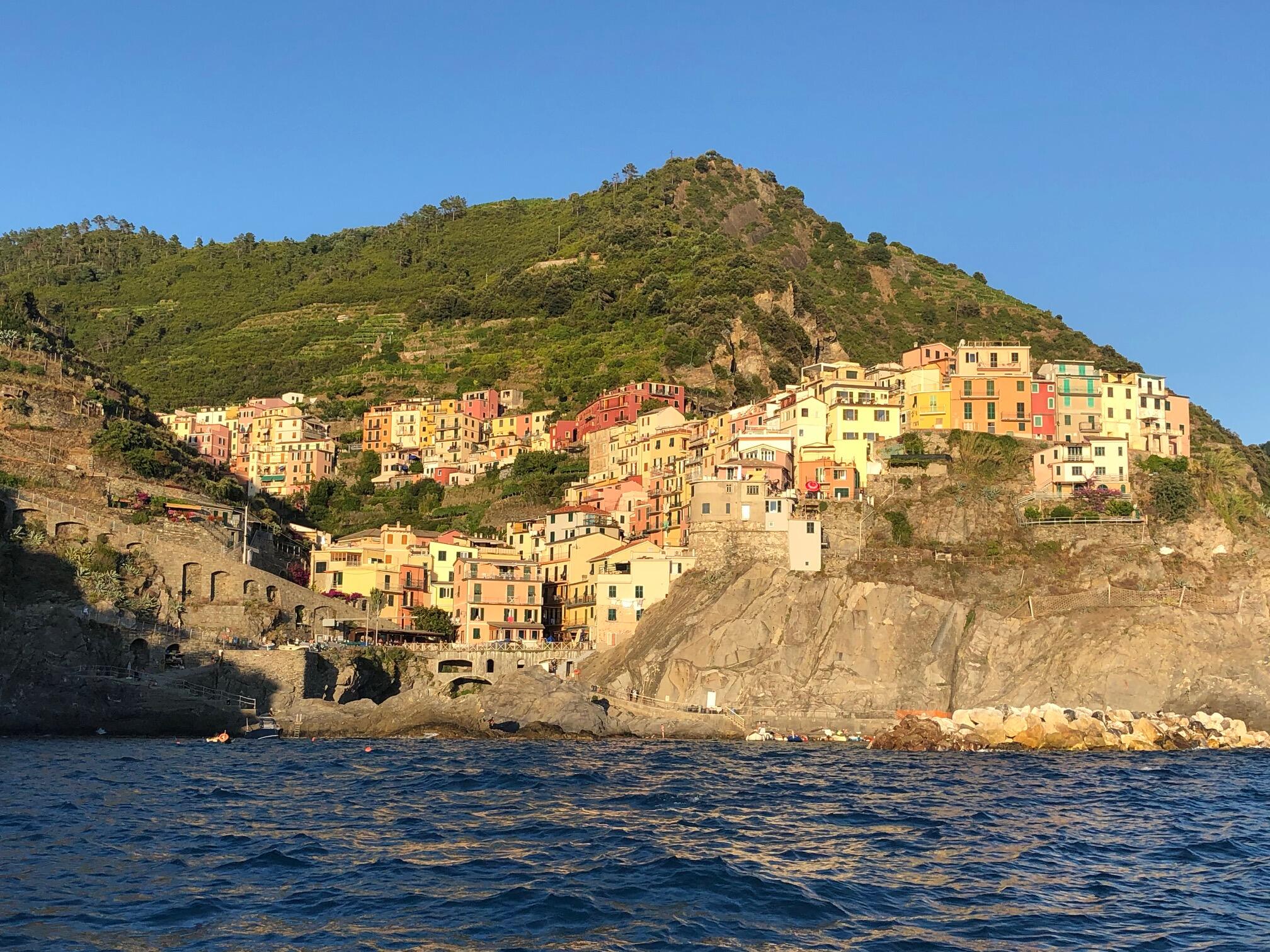 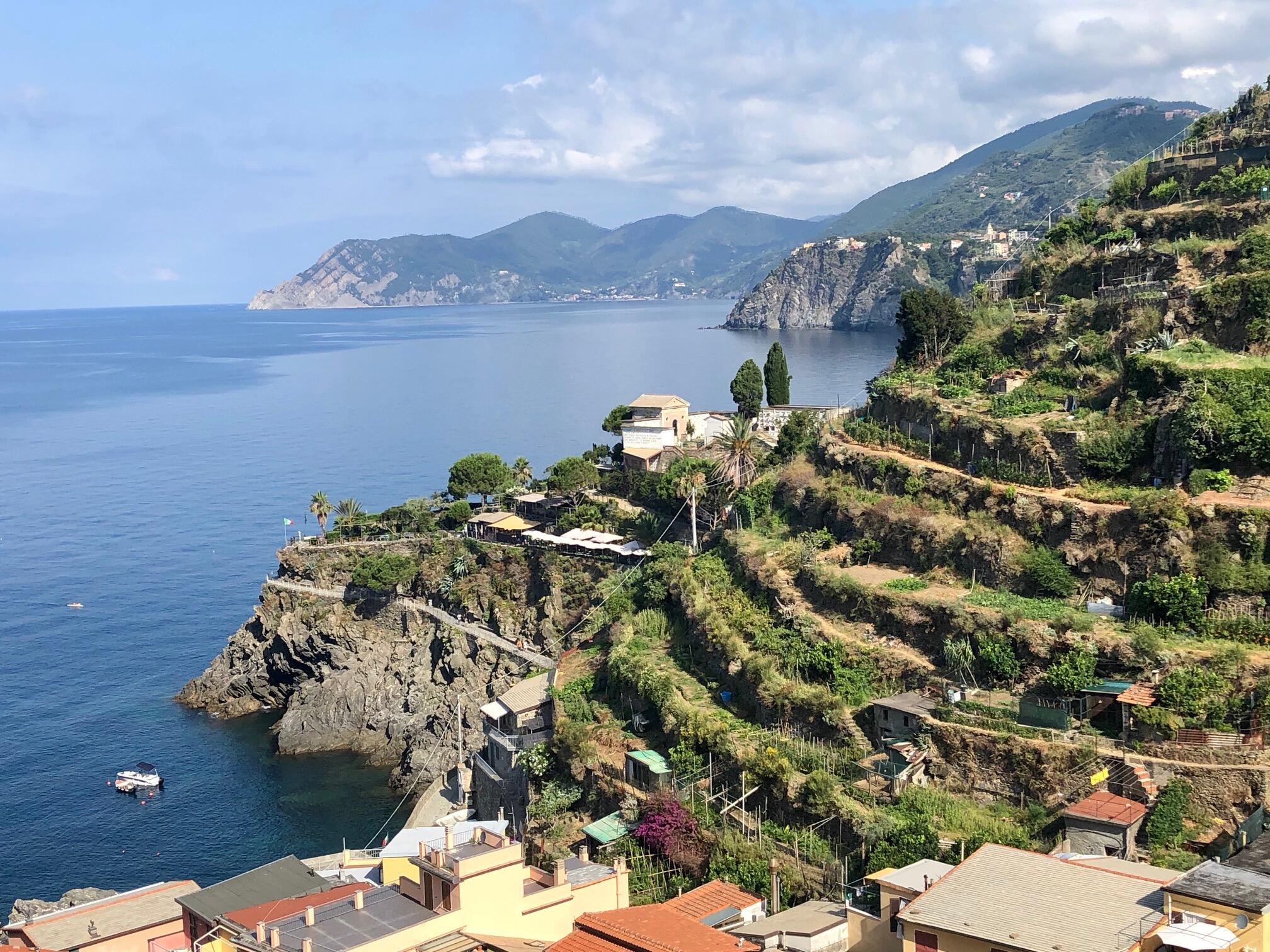 1.A quiet Manarola, one of the five villages of the Cinque Terre.

That is, until COVID-19 shut down Italy in early March 2020, placing the entire country on quarantine. It wasn’t until May that Ligurian locals were even allowed back at their beaches, during what would have normally been the start of their tourist season. For the first time in over 30 years, the Cinque Terre was void of tourists, namely the wide-eyed Americans that had filled the villages’ narrow alleyways and hiking trails along the craggy coastline.

Visiting Monterosso al Mare earlier this summer, the serene mood in the village reminded me of the calm uniquely felt in autumn. Socially distanced tables lay set at restaurants from the seaside to the village, while half the regular number of beach umbrellas shone in the mid-summer sun. Finally this riviera paradise could be enjoyed without the masses of day-tripping tourists. While I felt a sense of relief, how did the locals feel?

I asked American-born Christine Mitchell who, along with her husband Manuel De Fina, own and run Cantina di Miky, an innovative farm-to-table offshoot of gourmet restaurant Miky. “We reopened to the public in mid-June, and it’s been difficult. Because of the social distancing guidelines, we lost more than half of our tables, which would mean even in a normally busy summer losing, logically, half our revenue,” Mitchell admitted.

With no Americans in sight, the Italians have taken to re-discovering their country, which means adjusting to their dining habits. “We’ve changed our hours and our menu. Since we don’t have foreign tourists eating dinner at 6 p.m., we stay open later since Italians eat at 9 or 9:30 p.m. in the long summer evenings,” explains Mitchell. Throughout July, Cantina di Miky was fully booked on weekends and as summer stretches on, weekdays are equally as busy.

Mario Plotegher and Valentina Barbieri who own and run Enoteca Internazionale, the oldest wine shop in Monterosso, now also a restaurant serving gourmet bruschetta, chimed in about how the change in clientele has affected their business. “Usually we are full of people from all over the world throughout the day, but now it’s lunch and late dinner with mostly Italians,” says Plotegher. As is the story with the dozens of lodging options in the Cinque Terre, instead of advance bookings, Plotegher and Barbieri are mostly receiving last-minute inquiries for their two B&Bs.

While Italians and beauty-seeking Europeans are safely basking in the summer glow of the riviera sun, what does the future look like for the Cinque Terre? “What’s scary is September, October…having been dependent on foreign tourism the months when Italians go back to work or school means that we are a little concerned about midweek business,” admits Mitchell. “The world changed so quickly, we just need to roll with it.”

When Elia Bellingeri opened his 4-year old Monterosso-based bar and restaurant Torre Aurora set in an 11th century Genoese tower boasting breathtaking 360-degree views of the Cinque Terre, a pandemic was not part of his business plan. “While previously 80% of tourists were from other continents, now 80% are Italian tourists. At 50% occupancy compared to past years, and without state aid, which is yet to come, I don’t know how many small businesses will be able to overcome this moment of difficulty,” says Bellingeri. 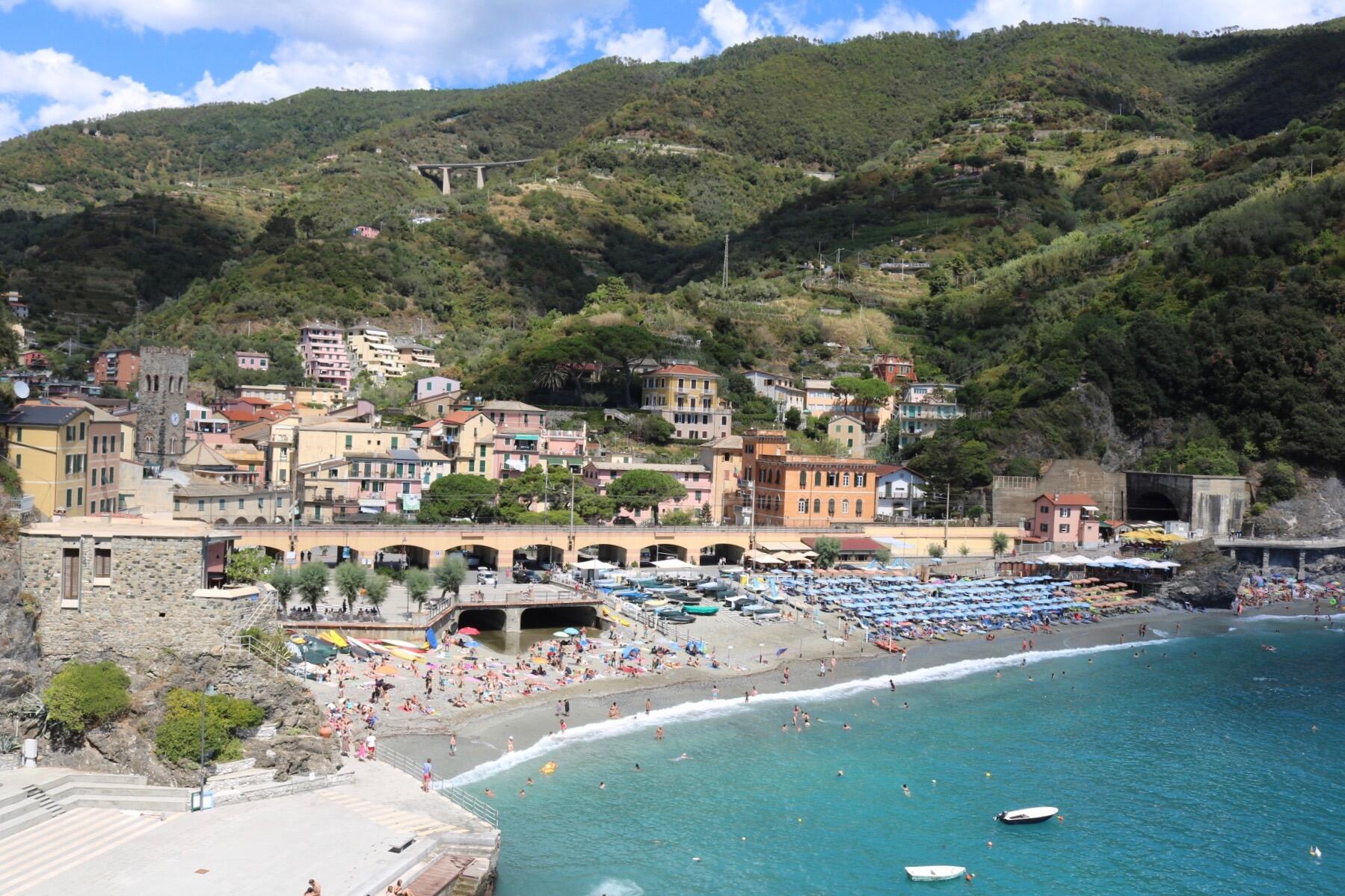 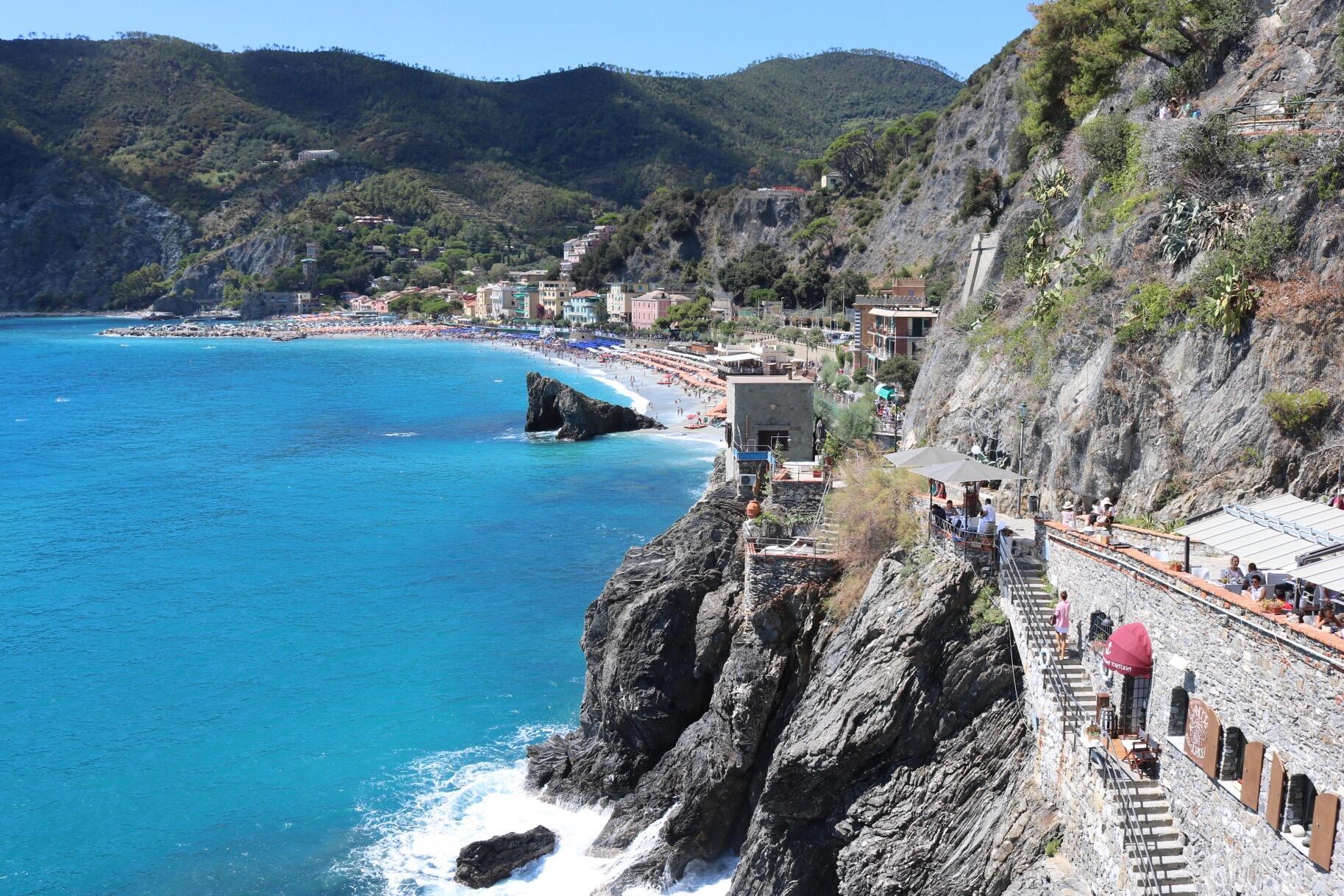 1. The views from the Torre Aurora in Monterosso.

As the locals of the Cinque Terre await the return to normalcy, preferably with a decrease in the number of day-trippers and an increase in visitors searching for an authentic riviera experience, Bellingeri shares some sage advice. “This period must be seen as a new departure, enhancing services, tourist and cultural heritage, restoring paths and roads. In short, improving the quality of the stay of tourists who wish to discover the beauty of the Cinque Terre.” Until then, fortunate are those who find their way to the five towns. These bucolic villages may never be so quiet again.