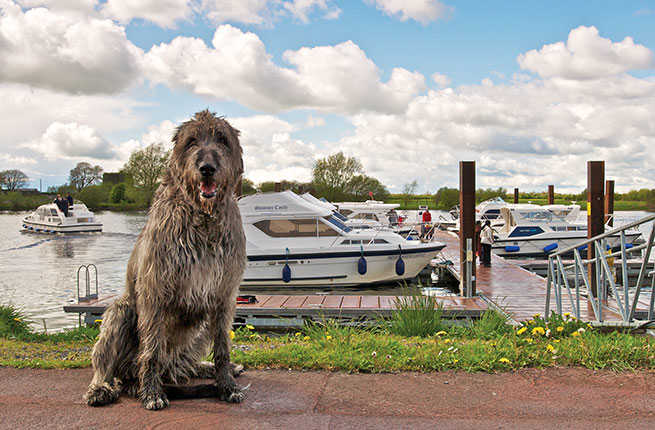 Starting in the northeast and flowing 224 miles south through Ireland’s ancient heartland before pouring into the rugged Wild Atlantic Way, the Shannon River holds the title of being the longest river in Ireland. Far from the heady nightlife in Dublin’s Temple Bar, the river route is the for those who want to take in Ireland at a slower pace. The Shannon’s hidden tales of mythical monsters, an abandoned medieval village, ruined monasteries, and one of Europe’s oldest pubs can be navigated by water or road. 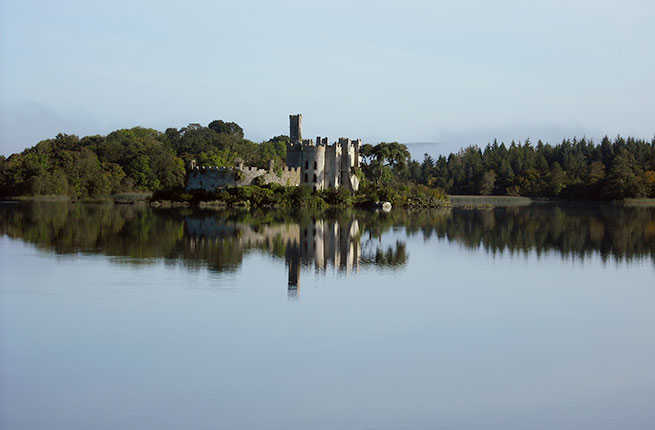 Lough Key on the upper Shannon is 800 acres of forest and lakeside gardens with a unique perspective on wildlife from high above the ground on Ireland’s only tree top walk along a suspended bridge. Visitors get a bird’s eye view of a marooned castle on Key Lake and the park’s changing seasons from the blazing autumnal shades of beech, oak, and horse chestnut leaves to late spring’s fields of bluebells.

Insider Tip: The Park also has a network of ziplines ($30) and the lakeside is equipped with a marina, with boats available for rent throughout the mid-Shannon River area. 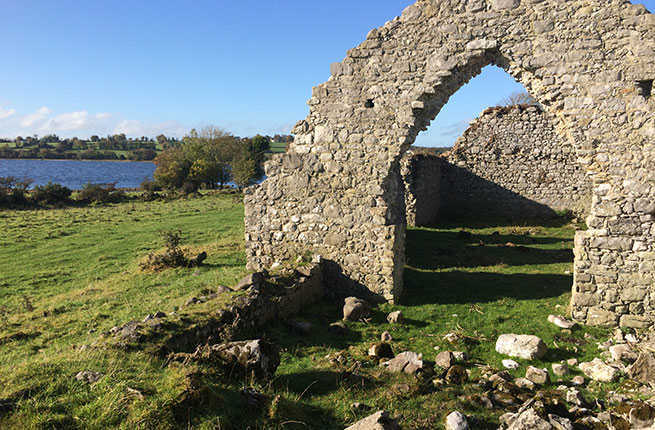 The forgotten medieval village of Rindoon has an epic backstory of treachery and restitution. It is located on a tiny peninsula that pokes out into the Shannon and is accessible by boat or foot. Geoffrey de Marisco, who occupied the town’s castle in the 13th century, left a legacy of misdeeds in his wake. He double-crossed his friends, falsely charged taxes for his own gain, and eventually lost his estate when he was banished from Irish shores by royalty.

But in fairness, he did leave behind a paragon of Irish medieval architecture.  Rindoon’s castle, town walls, church, mill, plots of decayed homes, and field systems provide a time warp back to Irish village life some 800 years ago. 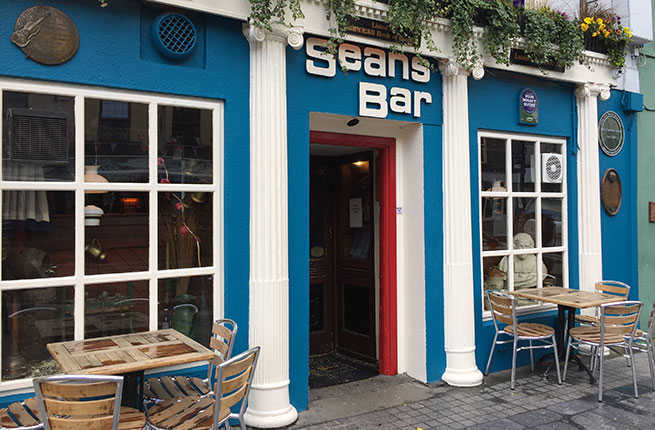 Serving customers for over 1,100 years, Sean’s Bar has been through it all. If it appears that customers are rushing to the bar, it’s not to call an order. It’s because the bar’s flooring has a gradient that was a feat of practical engineering back in the day. When the River Shannon flooded, the water would slip in the front door, through the pub’s robust flooring and out the back. Problem solved. Despite its setting near the quays and the town’s 12th–century castle in the heart of Athlone’s medieval quarter, Sean’s Bar has an unpretentious air without a fixation on its pedigree. Apart from the occasional celebrity visit, the client base is local and home-grown. Part of the pub’s original walls are encased in glass on the wall, and the low ceiling interior and narrow timber bar appear like a ship’s galley, which is appropriate given its long-standing relationship with the River Shannon. 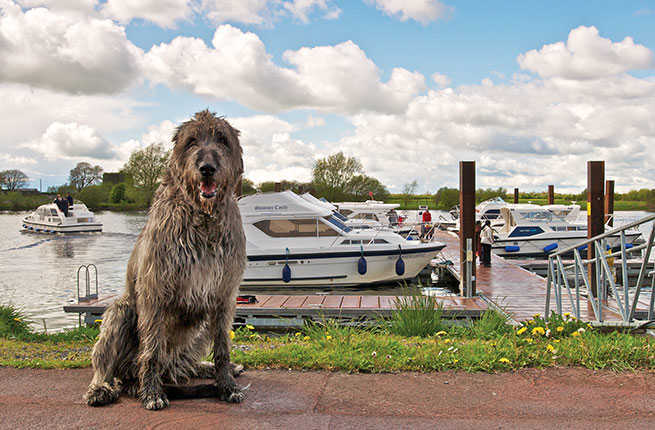 The Land of Charlotte Brontë

Jane Eyre author Charlotte Brontë honeymooned at her new Irish husband’s stately childhood home in Banagher in the 19th century. Her husband, Arthur Bell, returned to the riverside town of Banagher after Charlotte died to live out his life at Hill House, which is now a guesthouse called Charlotte’s Way. He was buried at the local St Paul’s cemetery in 1906.

Birr Castle, with its ground-breaking giant telescope built by astronomer William Parsons back in the 19th century, is 8 miles from Banagher. This Gothic Revival castle is still occupied by the Parson clan while its meandering garden paths lead to the world’s tallest box hedges and Ireland’s largest treehouse.

Insider Tip: Just up from the Banagher’s pretty marina is the down-to-earth JJ Houghs, a vine-clad pub notorious for its traditional music sessions. It was serving the local community even before Ms. Brontë arrived into town by horse drawn carriage. 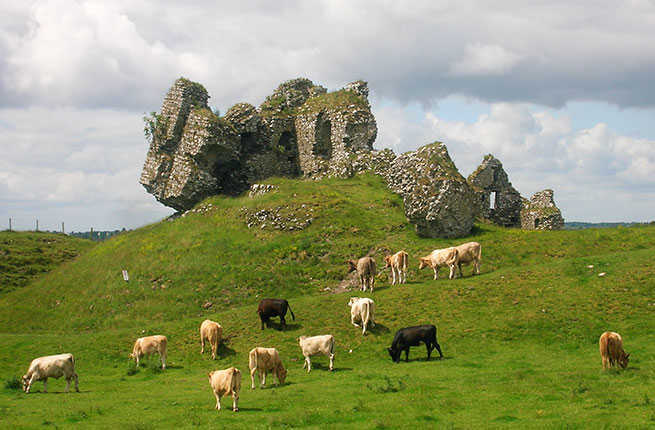 Clonmacnoise is arguably Ireland’s most fascinating monastery. Perched right on the River Shannon’s edge, Saint Ciarán founded the monastery almost 1,500 years ago with the assistance of Ireland’s last druid High King and first royal Christian. Clonmacnoise has two round towers and seven churches; one is equipped with a whispering door which was handy for sharing private messages by acoustics long before social media. It has Western Europe’s greatest collection of early Christian grave slabs, which are tossed haphazardly about the grounds.

Insider Tip: Clonmacnoise’s high crosses are the crowd pleasers. After centuries battling the River Shannon’s harsh elements, they were brought indoors for preservation by the office of public works. Their gloomy carved faces etch out the harsh practicalities of early Christian monastic life and they stand unembellished and illuminated like giant Celtic Totem poles. 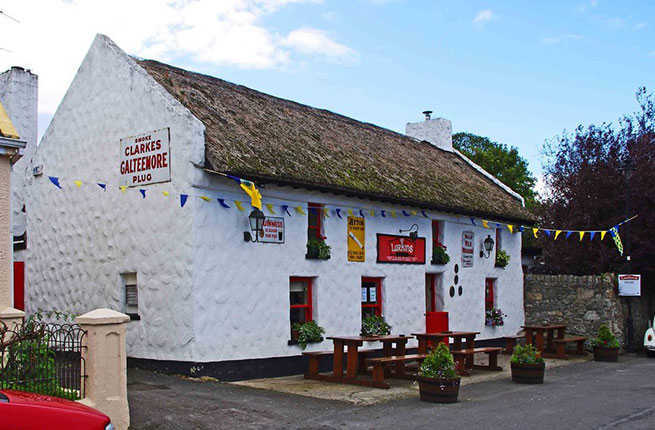 Moving south along the Shannon through locks and quays, the river meanders under Portumna Swing Bridge and flows into Ireland’s second largest lake, Lough Derg. Larkin’s Bar on the Tipperary side of the lake has served navigators for the last three centuries.

It’s one of those natural meeting hubs for cruising enthusiasts in a pretty village harbor setting. The bar’s white thatched cottage façade with red sash windows leads to nooks, flagstone flooring, and a scattering of homey fireplaces. Traditionalists will appreciate its reputation for the best bacon and cabbage on the river, but it’s Larkin’s contemporary edge and local artisan cheese that’s  putting it on the food critic’s map.More importantly, the selection of Ireland’s craft beer is making Garrykennedy one of the most popular destinations on the lower Shannon.

Insider Tip: The local county’s White Gypsy Ale on tap is a favorite with the pub’s clientele. 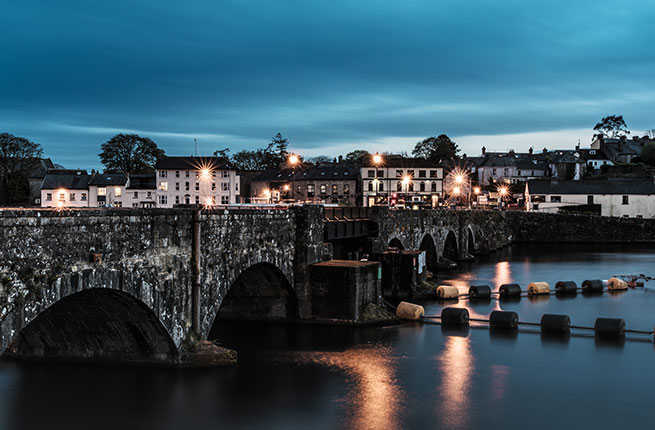 Killaloe in County Clare is joined by its neighbor Ballina in County Tipperary by a limestone arched bridge that stretches across the Shannon. It’s the birthplace of Ireland’s greatest King, Brian Boru, who ruled and united the country from 1002 to 1014, when his career was cut short by a Viking’s ax at the Battle of Clontarf. His home fort lies a mile away on a lush spur of land just before the lake flows back into the river. Boru is commemorated along with comely Killaloe’s nautical history in the old gatekeeper’s lodge by the bridge.

Killaloe is the most southerly port of call permitted by the bulk of most rental leisure craft.

Insider Tip: The 100-foot drop in Killaloe’s lock makes it the deepest in both Britain and Ireland. 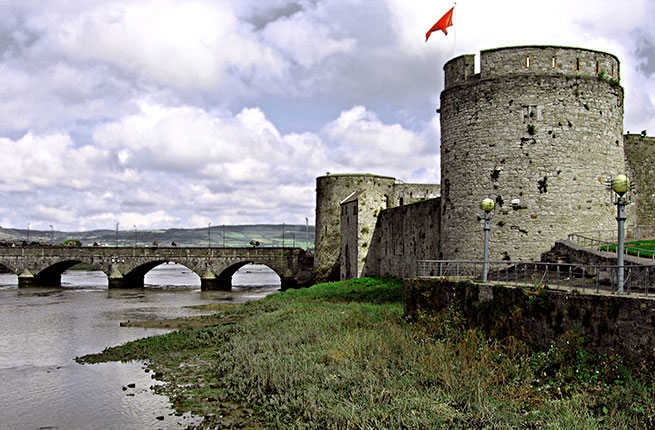 King John, Robin Hood’s nemesis, built Limerick City’s most iconic landmark 800 years ago. The castle dominates the city’s river shoreline between Thomond and Sarsfield Bridges and is fresh from a multi-million-euro makeover. The heightened interactive visitor experience includes sword fighting and scenes from one of the city’s many sieges. King John’s Castle is included on a marked trail around the Limerick’s medieval quarter, English Town, which includes St. Mary’s Cathedral, a section of the old city wall, and the 17th-century Alms Houses for widows of fallen soldiers.

Directly across from King John’s Castle, on the other side of the River Shannon, is the Treaty Stone, the site where an agreement was signed by opposing forces to end a siege in 1691.

Insider Tip: The Treaty Stone is conveniently located between the city’s oldest pub, JJ Bowles and the Curragower Bar, one of its finest watering holes and eateries. 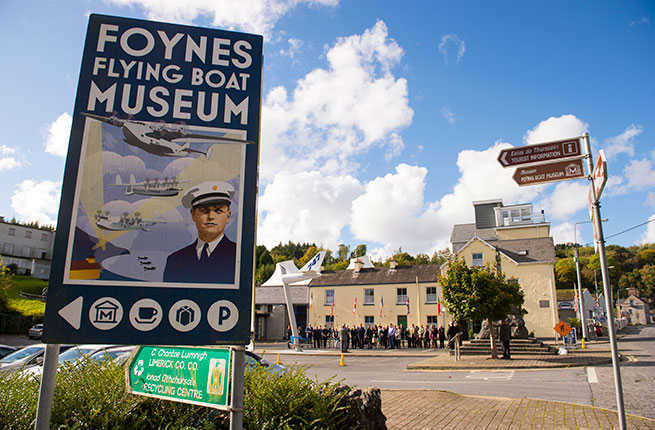 On February 25, 1937, the first flying boat landed at Foynes harbor on the River Shannon, bringing a new age of international travel. In the decades that followed, the Shannon would be the chief hub of air traffic between Europe and America.

While Shannon Airport was relocated across the estuary a few years later, Foynes has taken its place in aircraft history. It’s also the home of Irish coffee, and the Foynes Flying Boat Museum in the old terminal building recalls those pioneering days on the river Shannon. The museum has the word’s only full-sized replica of a B314 flying boat. 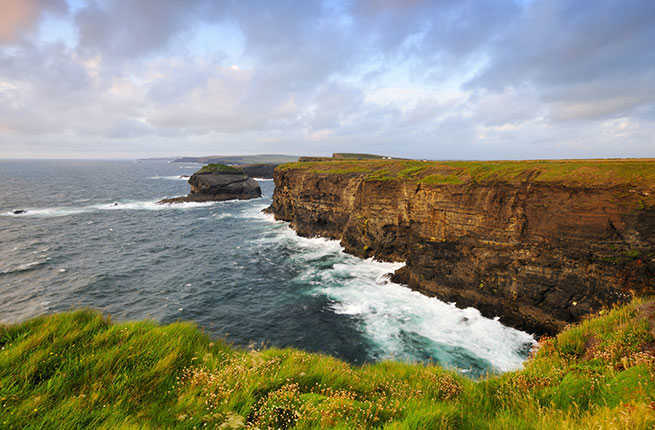 At its most narrow, less than one mile of land fastens Loop Head Peninsula to the mainland. Loop Head Lighthouse at the end of this wild, rollercoaster cliff faces the mouth of the Shannon to the south and the Atlantic to the north. Keating’s Bar which claims to be the “last pub before New York,” serves fresh catch.

The village’s tiny chapel holds the little ark, a timber vessel where mass could be celebrated out on the Shannon River when landowners refused to allow a Catholic Church on the mainland in the middle of the 19th century.

Kilkee is the peninsula’s access point while nearby Kilrush Marina is the port for Scattery Island, a monastic settlement with accompanying round tower. It was home to Saint Senan who, as the story goes, defeated the river Shannon’s monstrous serpent, the Cathach, back in the 6th century.