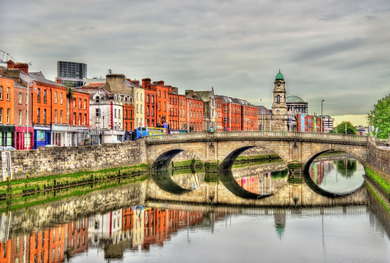 Paris has the Ritz, New York has the St. Regis, and Dublin has the Shelbourne—today, newly resplendent in its broad, ornamented, pink-and-white, mid-Victorian facade after a no-expense-spared renovation by new owner Marriott. Long famed as the Dublin home of the nation's literati, the grande dame of Stephen's Green has been immortalized by authors running from Thackeray to Elizabeth Bowen, and the Constitution of the Irish Free State was drawn up here. And it's not just got a good backstory: this is a truly excellent luxury hotel, to boot.

Rooms in front overlook the Green; those in the back, without a view, are quieter.

The Shelbourne's rooms boast all the 5* amenities you'd expect and are in swanky light pastel tones with a suitably luxurious feel. Beds are extremely comfortable and there's some lovely antique furniture dotted about, plus pictures which pay tribute to the history of Dublin and the hotel itself.

YOU SHOULD KNOW The rooms are lovely, but at the lower end of the value-chain, can feel a little small compared to some top hotels.

The marble bathrooms are beautiful, in traditional black and white, with soft gowns and Elemis bathroom products. Most have showers over baths. And the personality of the hotel continues to shine through, with little historic snapshots on the walls.

From the moment a doorman in a top hat lets you in, you know you're in for a treat here. The lofty lobby doesn't disappoint, with its marble columns and gilt, and then reception continues the traditionally swanky look - all mirrors, dark wood, crystal, and stained glass. At the back of the lobby is one of the hotel's lovely touches - its own little history museum including a guest register, where you can don the white gloves and check out if your relatives ever stayed at the hotel in days past.

The hotel has a lovely 18m pool with some natural light and a relaxingly warm ambient temperature.

The secluded spa, with its seven treatment rooms, sauna and steam room, is a treat, and guests can chill afterwards with some nibbles in the grand old relaxation room overlooking St Stephen's Green. Mobile phones are banned. The hotel also has its own salon with a full roster of beauty treatments.

The hotel's fitness offer is impressive: a large gym plus a fitness suite, classes and a dance studio - some of which are in rooms still boasting their original Georgian features, like beautiful original fireplaces.

The Shelbourne has the trick of making every dining opportunity feel like an occasion. Breakfast is exemplary, and served in the swanky Saddle Room, the hotel's main restaurant - often voted among the city's best hotel dining offer - which later serves great steak and seafood for lunch and dinner. And in between, an enduring, venerable tradition is to take tea in the exquisitely tasteful Lord Mayor's Lounge.

Again, there are several good options. Fantastic cocktails or coffee in the bright, relaxing street-front No 27 Bar and Lounge, where you can also eat. Or there's the exclusive 1824 bar, named after the date the hotel was established, which is guests-only. But the real star of the show is the Horseshoe Bar, a proper Dublin institution, where you could find anyone drinking in its cosily traditional environs, stacked full of memorabilia and with red walls that speak of gossip-y secrets. There are TVs, but they are only turned on for Irish rugby, because the team stays in house.

The hotel is beautifully placed for classic and historic Dublin, and is indeed a part of that element of the city in its own right. It is also walking distance from other cultural attractions and the city's best bars and restaurants.

Keep up the swank factor and head for a nearby gourmet treat at DAX restaurant (8-minute walk). Or for something completely different, try KOH (19-minute walk), a pan-Asian restaurant where guests sit at a long shared table (or in booths) and enjoy fresh and delicious cocktails as well as top cooking.

The historic O'Donoghues Pub (5-minute walk) is even older than the hotel, dating from 1789. It also boasts many of its own legends, including the fact that Irish folk legends, The Dubliners, regularly played here. Or try the cocktails at Peruke and Periwig (3-minute walk), a little gem of a bar.

If it's good enough for Bill Clinton, Princess Grace of Monaco and Charlize Theron - among about a million other celebrities - The Shelbourne is good enough for us, and then some. Probably Dublin's best, and certainly its most historic and swankiest, hotel.