A supposed ban on 'modest' swimwear in the famous baths of Budapest has created a sense of confusion and calls of religious discrimination. Fodor's sent one writer to visit three baths to investigate what's really going on.

Budapest is one of Europe’s greatest cities; with its striking architecture, easy walkability, cheap and efficient mass transit, and dazzling UNESCO World Heritage waterfront, there’s much to love. One of the most popular attractions are the many thermal baths (fed by natural underground mineral springs) that have earned the city the nickname “The City of Baths.” But what does one wear for a soak in one of these large, public baths?

After receiving a message of concern about modest swimwear from a reader, we decided to investigate. The reader stated that during a visit to Gellért Spa while wearing a long-sleeved swimsuit to protect her upper body from the sun, she was told her attire was scaring other guests and she must rent a bikini or leave. But there’s a suspicion that the rule was related to Prime Minister Victor Orban’s anti-migrant policies, including a 109-mile-long fence along Hungary’s southern border.

This reader is not the first to encounter this issue at a Budapest bath. In 2016, the Hungarian news site 444.hu reported that two women were asked to leave Széchenyi Thermal Bath because they were wearing burkinis. Trip Advisor reviews in  June 2019 report women being asked to leave for wearing “full-coverage” swimsuits and “3/4-swimming Lycra leggings” at Rudas Thermal Bath.

I decided to visit three of the most popular baths to better understand the official rules and get the first-hand experience. 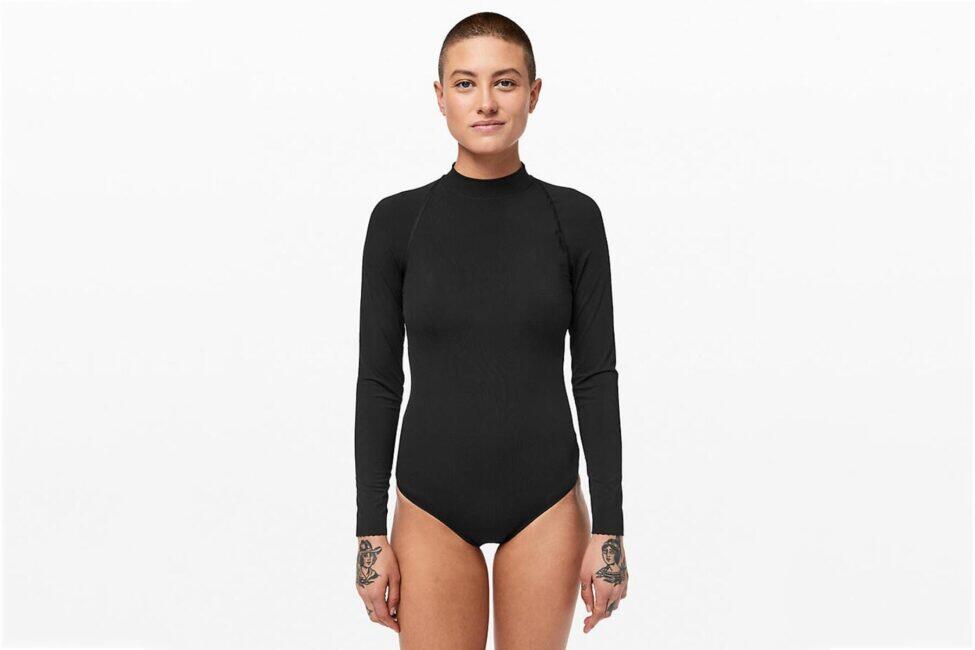 [Editor’s Note: The above photo features almost exactly the swimsuit the writer wore to the baths: black, long-sleeved, one-piece. Photo courtesy of lululemon.]

My first visit was to the one our reader had visited, Gellért Spa. The dress code on their website explains that, prior to January 1, 2013, the spa had separate pools for men and women. Combining areas changed the dress code from nudity optional to bathing suits required. It further states, “Women guests are kindly asked to wear decent swim wears [sic]. The bare minimum is the proper bikini style swimwear [sic], but you can don a sporty tankini, shorts (with a top), or a one-piece [sic] ladies swimsuit too, if you prefer more coverage, or you are planning to do some laps in the open air [sic] swimming pool. Please kindly note that swimming suits covering the full body (e.g. burkini) is [sic] unfortunately not allowed in Gellért Spa.”

After about 30 minutes of dipping, as I was exiting my second pool of the day, I was approached by an employee requesting that I push up my sleeves.

Upon arrival, I was shown to the locker room where I changed into a black, one-piece swimsuit covered by a black, long-sleeve, UV protection shirt made from polyester and spandex, similar to swimsuit material, and headed out for a dip in my first pool. (Each bath has multiple pools offering a variety of water temperatures and mineral contents.)

After about 30 minutes of dipping, as I was exiting my second pool of the day, I was approached by an employee requesting that I push up my sleeves. Very polite and seemingly embarrassed he said a colleague had observed me and asked him to speak with me. When I respectfully questioned why this was necessary, he pointed to a sign with illustrations of acceptable swimwear which, for women, showed bikinis and one-piece suits captioned with, “Wearing of a full-body swimsuit (clothes) is not allowed in the pools.” I reasoned that mine was not a full-body suit and he went on to explain that it, as well as burkinis and neoprene (wetsuit material) are not permitted. The reason given was that these suits collect more water than traditional swimsuits and, when exiting pools, drop more water on the ground, causing a slipping hazard. This explanation was difficult to accept as the floors in all baths are saturated with water, even with drains running throughout. I’ve never witnessed mopping throughout the day, as it would be impossible to keep up and floors are expected to be wet. 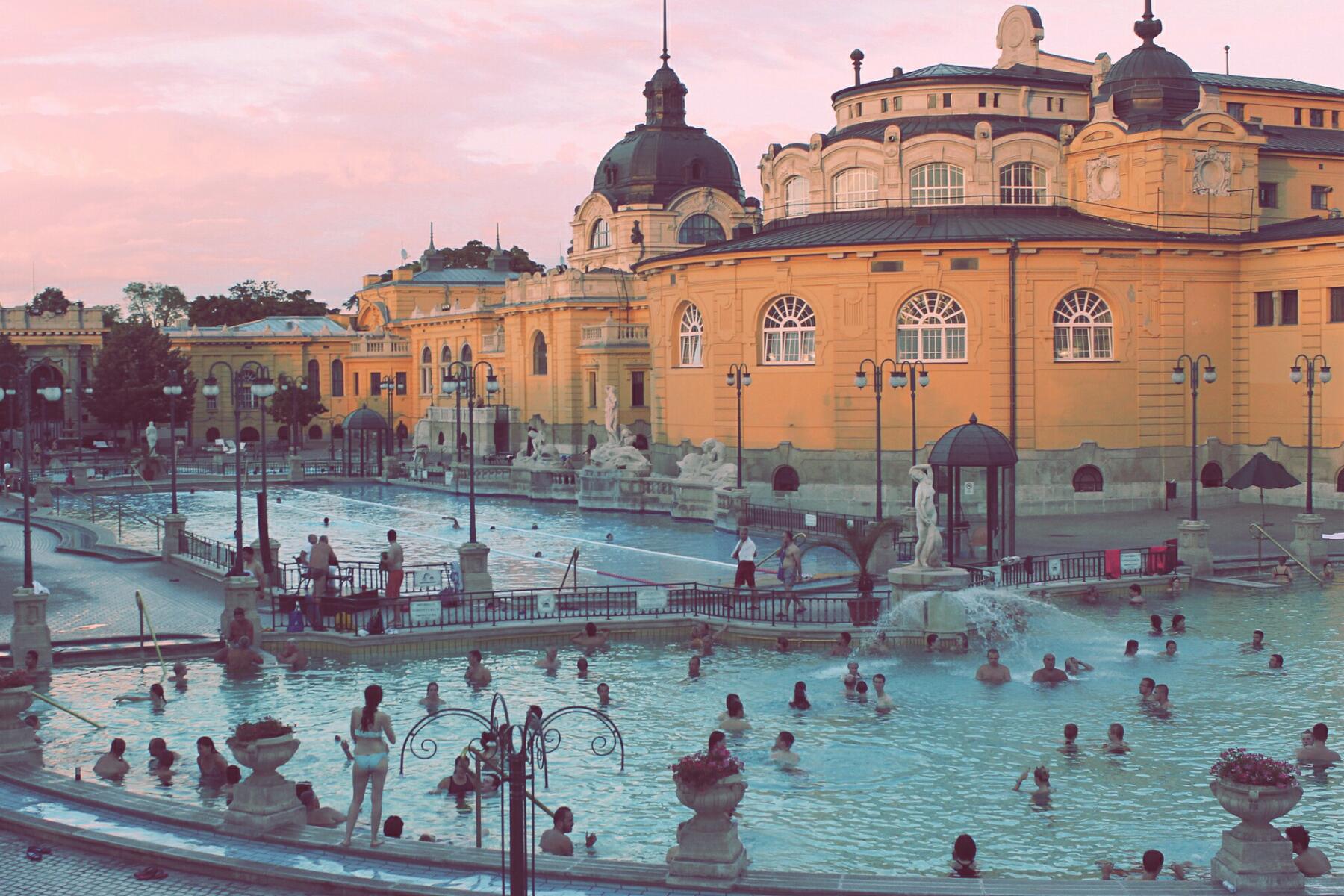 Sleeves on sun shirts such as mine are meant to be skin-hugging and I pushed them up as far as possible, halfway between my wrists and elbows, and moved on to the next pool. Eventually, I pulled down the sleeves and, after three more hours of soaking in various pools and saunas, the day continued without incident.

As I exited Gellért Spa, I asked to speak with a manager to confirm the rationale behind the dress code. He politely confirmed that the rules were indeed for safety reasons, but he said it was because long sleeves and pants can hide skin conditions which might be a health hazard.

My next visit was to Rudas Thermal Bath. This 450-year-old Turkish bathhouse boasts 12 pools and is currently the only bath with separate days for men and women. While Tuesday is women’s day, all other weekdays are for men. During these days, bikinis and one-piece suits are allowed, as well as complete nudity and “aprons,” loose-hanging material covering more “private” areas. Friday nights and weekends are co-ed, with no nudity and the same dress codes as other baths.

Wearing the same attire as my visit to Gellért, I spent time in each pool and, though the same signs were posted, I was never approached by any staff members and spent a wonderful day enjoying traditional Turkish baths as well as a bath on the roof overlooking the Danube river.

The manager declined to meet with me and asked the employee to relay that long-sleeves and pants aren’t allowed as people must wear swimwear.

My final visit was to Széchenyi Thermal Bath, one of the largest and most famous baths in Budapest. Though the standard signs were posted, I wasn’t asked to change or adjust my clothing but, upon exiting, I thought I’d further explore the reasoning for the dress code. Identifying myself as a travel journalist, I asked to speak with a manager so we could prepare readers for how they should dress and why. The manager declined to meet with me and asked the employee to relay that long-sleeves and pants aren’t allowed as people must wear swimwear. I explained that what I described was swimwear and, though the conversation was in Hungarian, I heard the employee say, in English, “not religion” before hanging up and explaining that it’s easier to identify what might not be bathing suit material if everyone is wearing traditional western suits.

I contacted Budapest Spas, CPLC, the company which manages the baths, requesting comment and here is their response:

According to our policy statement, visitors can wear shoulder- and knee-long swimsuits.

The length of the swimsuits is uniformly defined for all baths in Budapest, so we can not [sic] make differences [sic] in the different baths.

Large swimsuits have a much higher water carrying capacity, leaving much more water coming out of the pools that can cause accidents.

In addition, it is also a matter of public health concern, as there are more bacteria on a larger surface, and its evaporation in saunas and steam chambers is unhealthy.

After following up to request studies supporting this, I was told this rule was based on the recommendations of the National Public Health Office. I reached out to the Health Office and received a response from Dr. Cecília Müller, Chief Medical Officer pointing to their 2016 recommendation that bathers shower with soap and water prior to entering pools. It further states that those wearing swimsuits with longer sleeves or pants should do this prior to donning their suit.

While the requirement to shower prior to entering the water is a common rule worldwide, I’ve not witnessed overwhelming adherence at the baths.

The Health Office recommendation also states that wearing more clothing does not necessarily contribute to more water dripping on the floor, creating a slipping hazard.

The takeaway—let the buyer beware. While you might not be stopped if you wear a long-sleeved or leg-covering swimsuit, whether it be for sun protection, fashion, religious reasons, or modesty, you should know that it’s a possibility. Also, assume that a burkini will not be allowed.