Greece’s second city, Thessaloniki bears the marks of a tumultuous past and consequent myriad cultural influences. Part of the Hellenistic, Roman, Byzantine, and Ottoman empires, this important trading center has been home to diverse communities, each bringing their languages, traditions, and cuisines to the port city. Today, Thessaloniki is a vibrant university town known for its culinary exploits and dynamic cultural scene, all the while maintaining a reputation as a chilled-out metropolis where life can afford to move a little slower. A trip to Thessaloniki should take in the city’s rich archaeological offerings—think a well-preserved Roman forum, frescoes at the Rotunda, and the elaborate Arch of Galerius—but take on a decidedly relaxed pace, making time to savor a sweet bougatsa, stroll the waterfront and discover the meaning of halara. 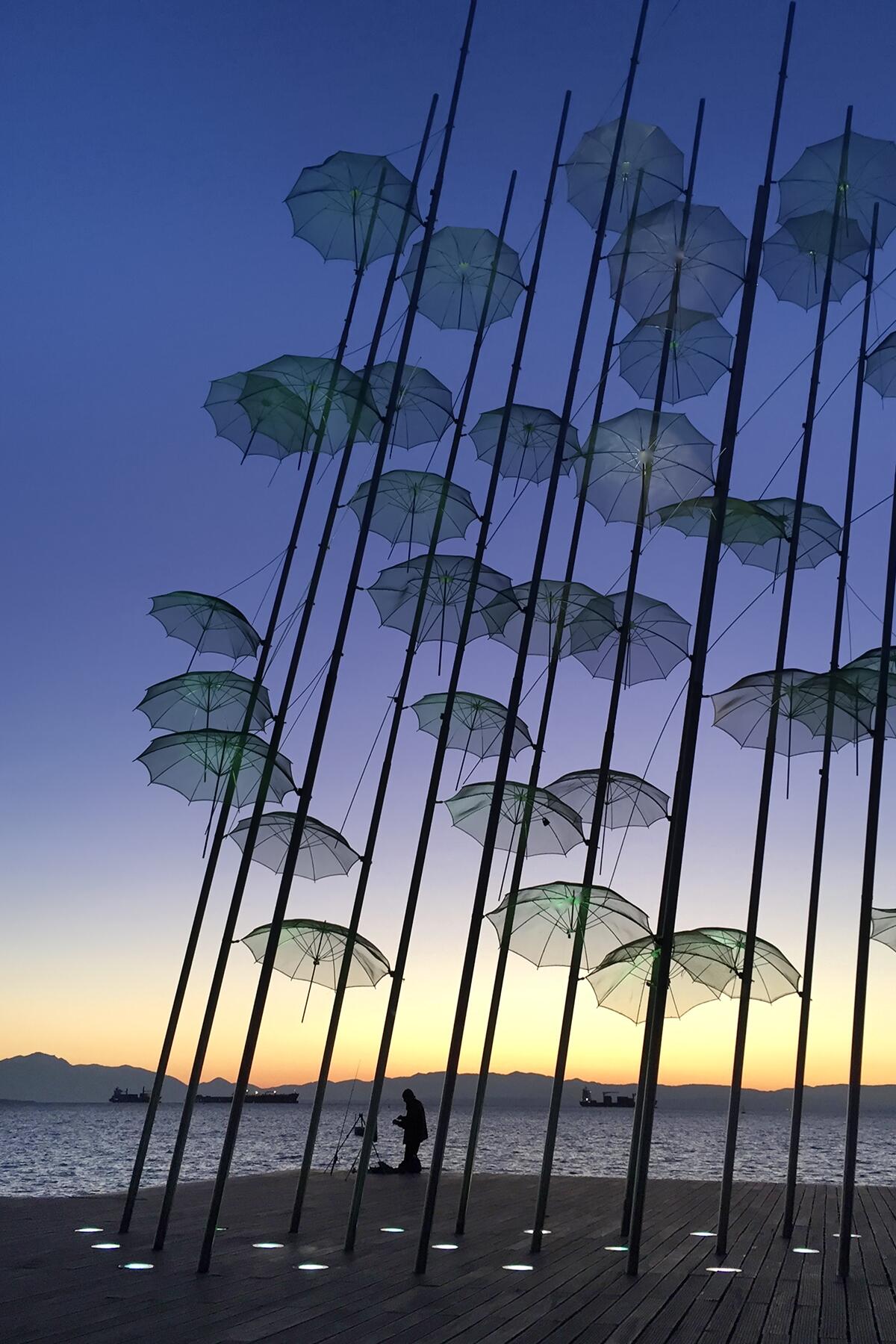 The City on the Water

In contrast to Athens, where the coast is a metro or tram ride from the city center, the sea is a point of focus in Thessaloniki. The promenade—or paralia—stretches over three miles, from the city’s port to the imposing Megaro Mousikis concert hall. Adorned with 13 themed gardens, including the Water Garden (complete with poker-faced terrapins), the waterfront offers an ideal space for strolling, jogging, and people-watching. Among the symbols of the city, here you’ll find George Zongolopoulos’s ever-Instagrammable “Umbrellas” installation and a triumphal monument to Alexander the Great, these days a popular spot for skateboarders. The waterfront’s downtown portion is a hive of activity—settle in for a beer at retro bar Thermaikos, a mainstay of the city’s social scene since 1992, to admire the sunset across the Thermaic Gulf. If you’re lucky, you may just catch a glimpse of Mount Olympus across the bay. 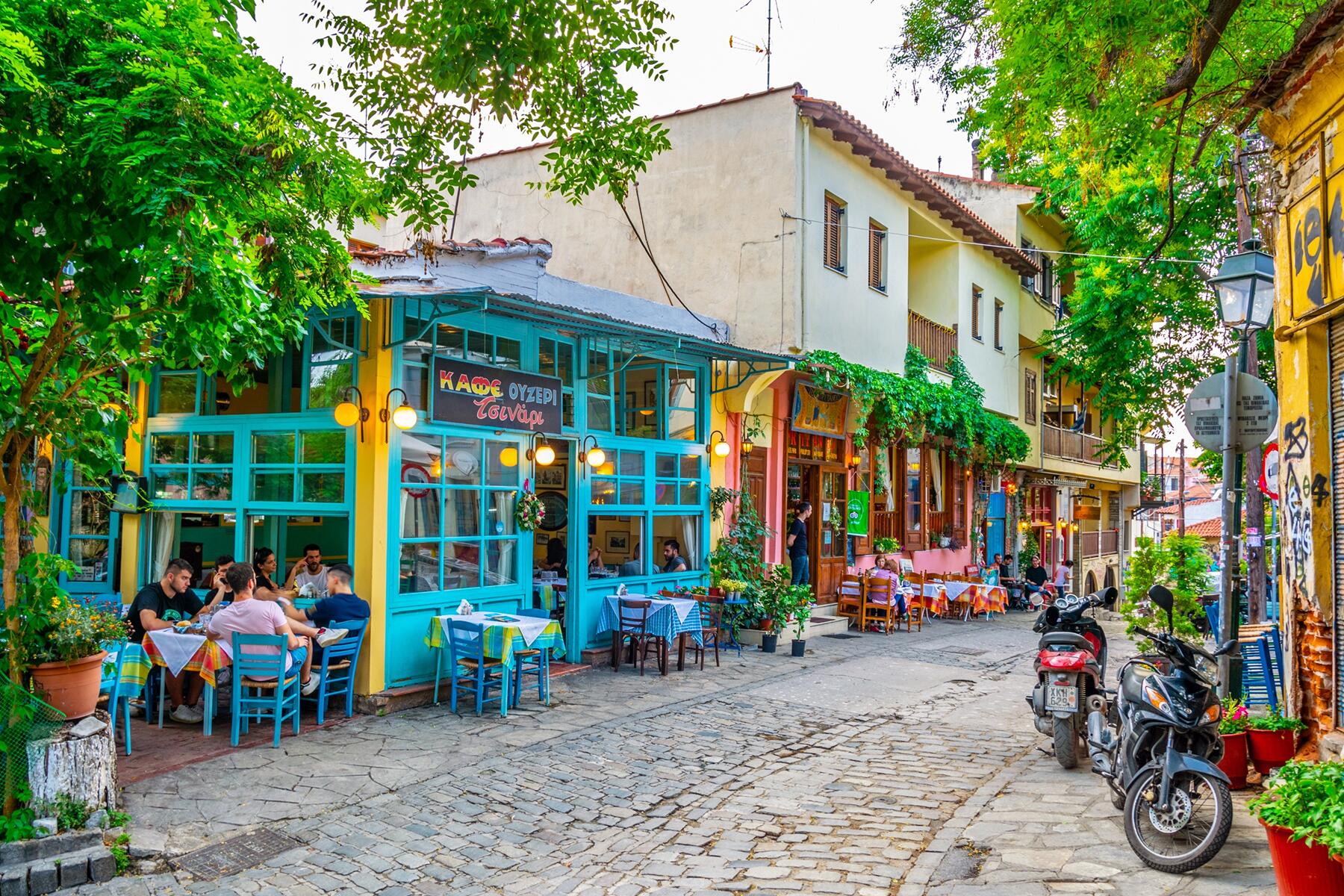 Thessaloniki may be Greece’s second city, but it is the country’s culinary capital. Exploring the (constantly growing) host of restaurants is a journey through millennia as a melting pot of cultures: Greek, Balkan, Jewish, French, and Turkish. The Thermaic Gulf and the waters around the Halkidiki peninsulas offer up bountiful fish, while the river delta to the west of the city is fertile ground for shellfish. A visit to the Kapani Market provides an excellent introduction to the region’s natural wealth: vibrant fruits and vegetables, aromatic herbs and spices, sweet honeys and calming “mountain teas.” To sample traditional small plates in the atmospheric Ladadika neighborhood, head to Full tou Meze, or seek out a taverna experience in the heart of downtown Thessaloniki at I Rouga. For a contemporary take on classic cuisine, make a beeline for Ergon Agora, a restaurant, and marketplace that channels industrial chic. 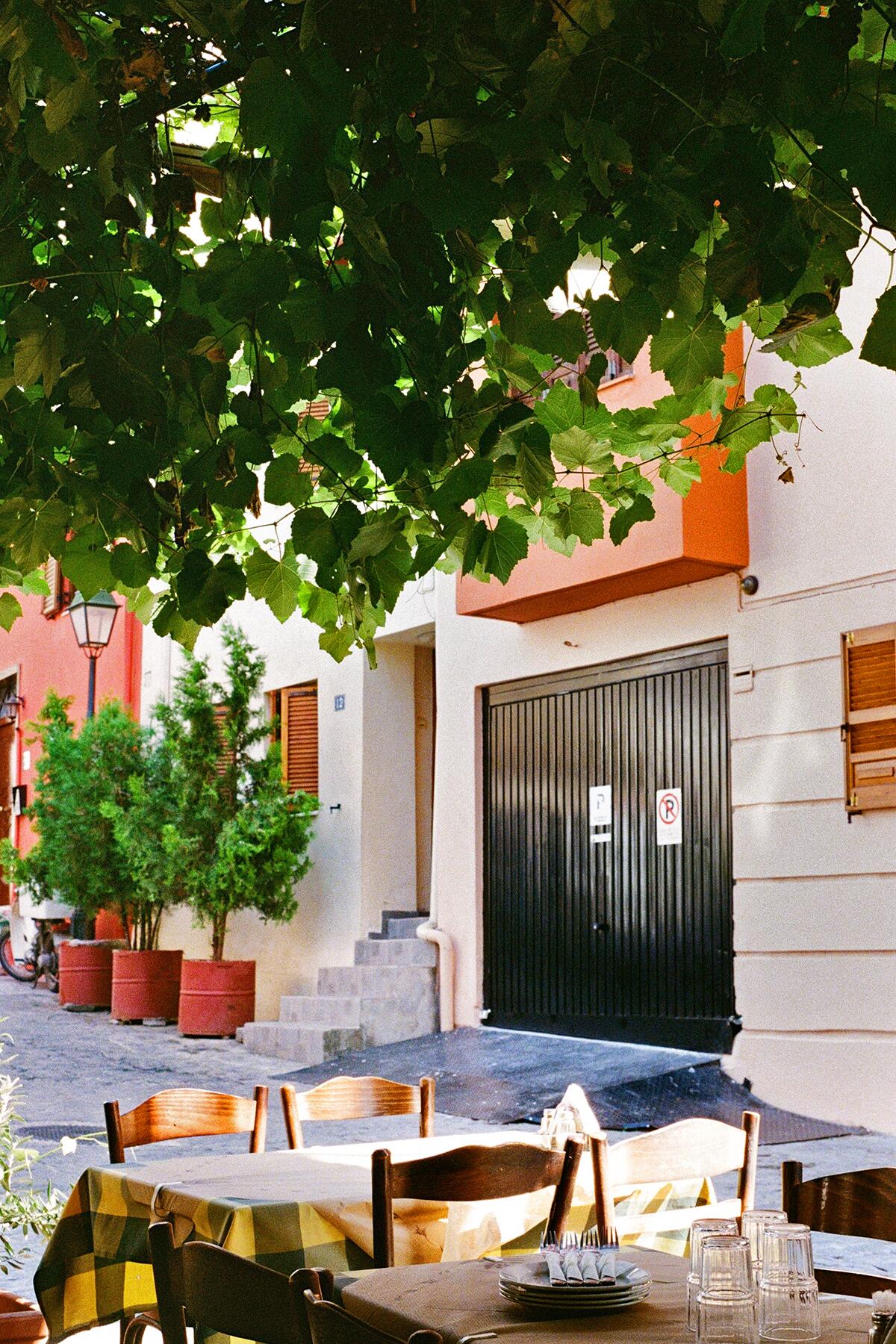 “Halara,” the Art of Doing Nothing

Meaning “take it easy” or “laid back,” halara is nothing short of a lifestyle. Often used to describe Thessaloniki—and particularly by residents of hectic Athens, Thessaloniki’s southern rival—the term denotes a slower, more relaxed pace of life. This quintessentially local characteristic can be lived out by visitors to the city: simply walking around and stumbling upon the key sights is the perfect way to discover this chilled-out metropolis. Such a penchant for taking things slow is reflected in the city’s cafe culture—to experience a kafeneio (traditional coffee shop), pay a visit to Loux near the Roman Forum for a grainy Greek coffee, or The Blue Cup in the Ladadika district for a third-wave brew. A testament to the strength of cafe culture here, outside many businesses you’ll notice chairs set up with a small table, usually occupied by the owner savoring a cup of coffee. 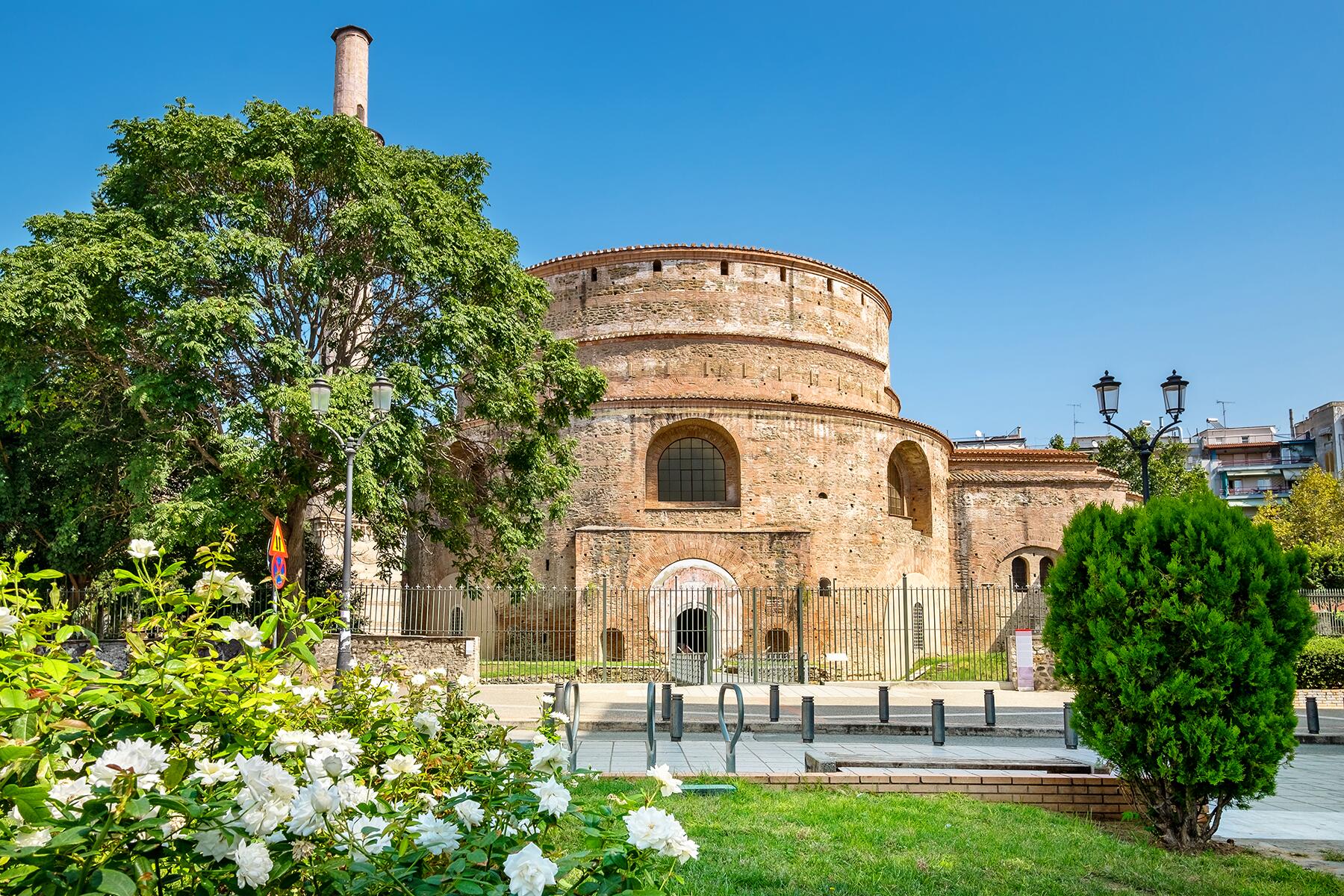 Traces of the Ancient World, Still Shaping the City Today

While Thessaloniki’s ancient offering is a little less imposing than the Acropolis, it is no less rich. Strolling the city—founded around 315 BC by King Cassander of Macedon—takes in an array of important archaeological finds from Roman and Byzantine times. Among the must-see sites are the Roman Forum (Ancient Agora), the social and administrative center of ancient Thessaloniki; the Rotonda, which since 306 AD has functioned as a temple, church, and mosque and is notable for its surviving frescoes; and the triumphal Arch of Galerius, whose marble pillars are adorned with stunningly elaborate carvings. Religious history enthusiasts will want to check out the Byzantine-era churches of Hagia Sophia (mirroring the Hagia Sophia in Istanbul) and Hagios Demetrios, dedicated to the patron saint of Thessaloniki. Such is the ancient world’s prominence in the contemporary city, that archaeological finds have long been thwarting attempts to build a metro. 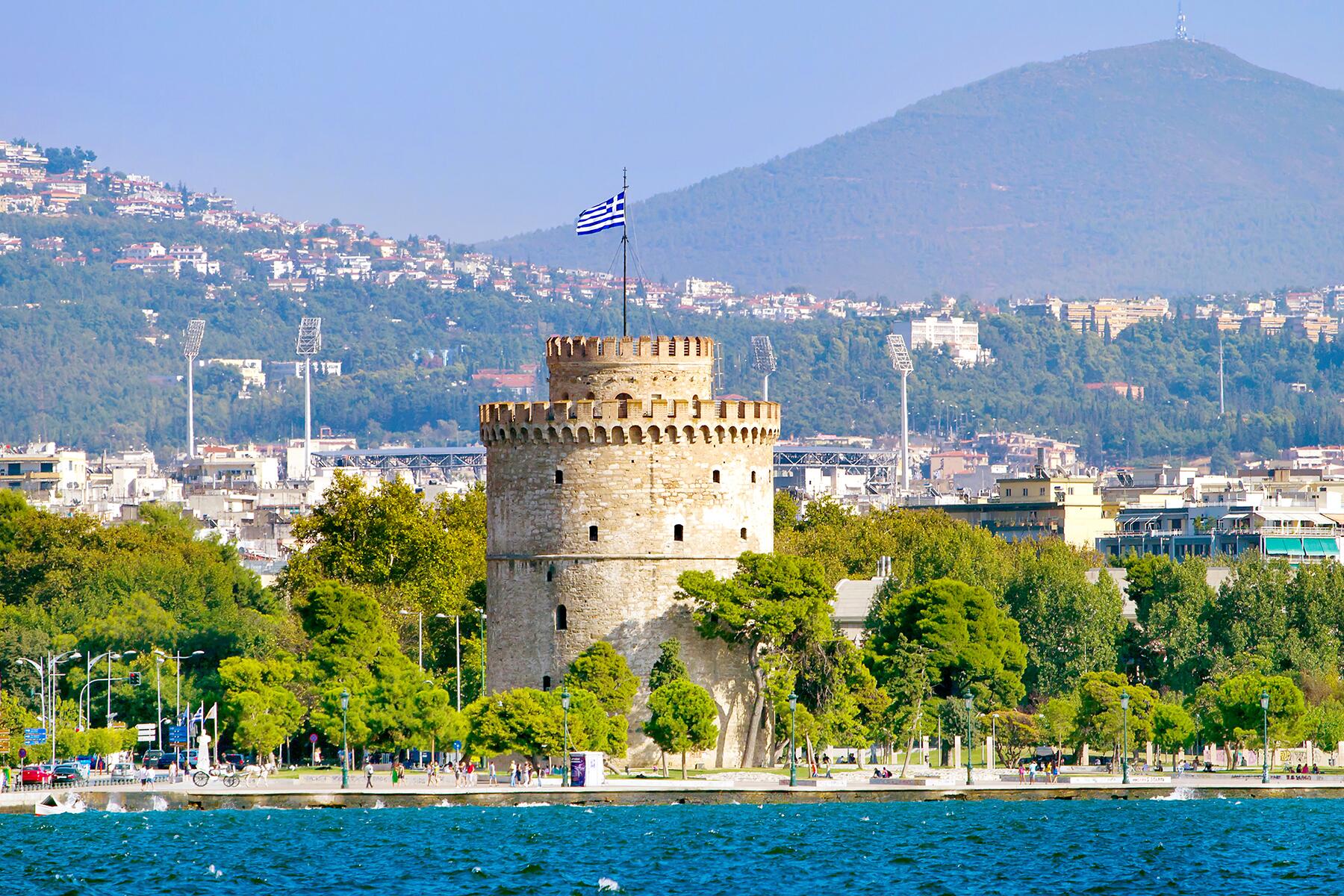 Ottoman Sultan Murad II captured Thessaloniki in 1430, ushering in an era of Ottoman rule lasting close to 500 years. Any foray into Ottoman-era architecture must start at the White Tower, which has become the emblem of the city. Built in the 15th century, the cylindrical waterfront tower formerly known as the “Tower of Blood” or “Red Tower” was used as a prison for those awaiting execution, and gained its current moniker when it was whitewashed following Thessaloniki’s liberation. Today, it houses a museum and offers panoramic vistas of the city and bay. The city’s first Ottoman bathhouse, the Bey Hamam, is open to visitors and is partly occupied by the To Palio Hamam rooftop bar, while Aigli Geni Hamam has been converted from a bathhouse to one of the city’s hottest party venues. Other Ottoman architectural gems to look out for include the Alaca Imaret Hamsa Bey Mosques.

INSIDER TIPMustafa Kemal Atatürk, the founder of the modern Turkish state, was born in Thessaloniki in 1881. His birthplace, a historic house dating back to 1870, has now been converted into a museum. 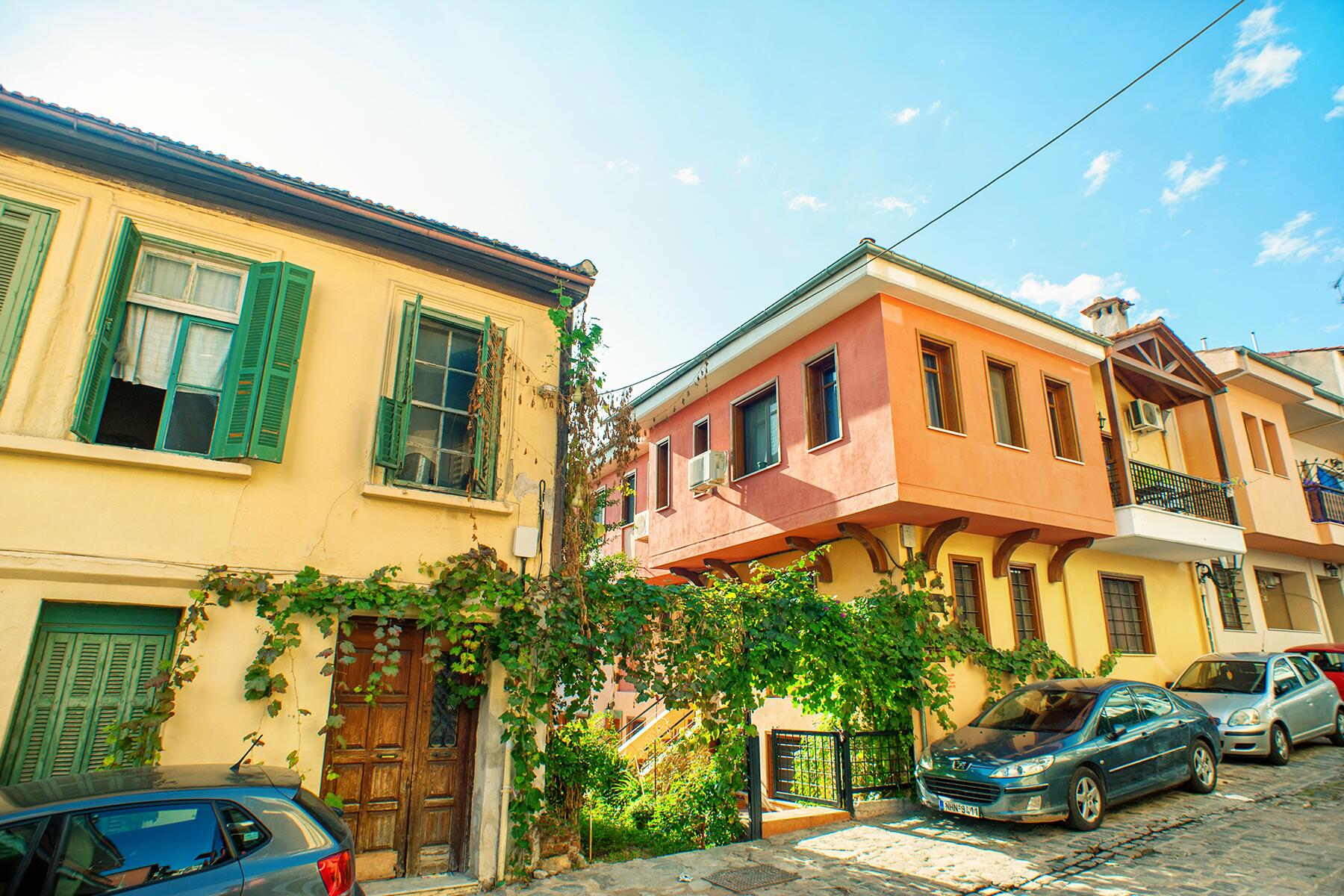 Ano Poli, a Charming Village atop the Modern City

For a taste of village life without leaving the big city, make the steep climb up to Ano Poli (literally the “Upper Town”) to discover one of the only neighborhoods to survive the Great Fire of 1917. Wander its meandering stone-paved streets to find traditional Greek and Ottoman architecture and quaint squares, before arriving at the Byzantine- and Ottoman-era fort known as the Eptapyrgio. Join the groups of young people who gather to watch the sunset from the old city walls, before heading for dinner at Toixo Toixo (with Toixo meaning “Wall”) or the vine-adorned Igglis taverna. Should you be exploring in the day time, drop by the roof terrace cafe at the Little Big House hostel for a freddo espresso iced coffee. 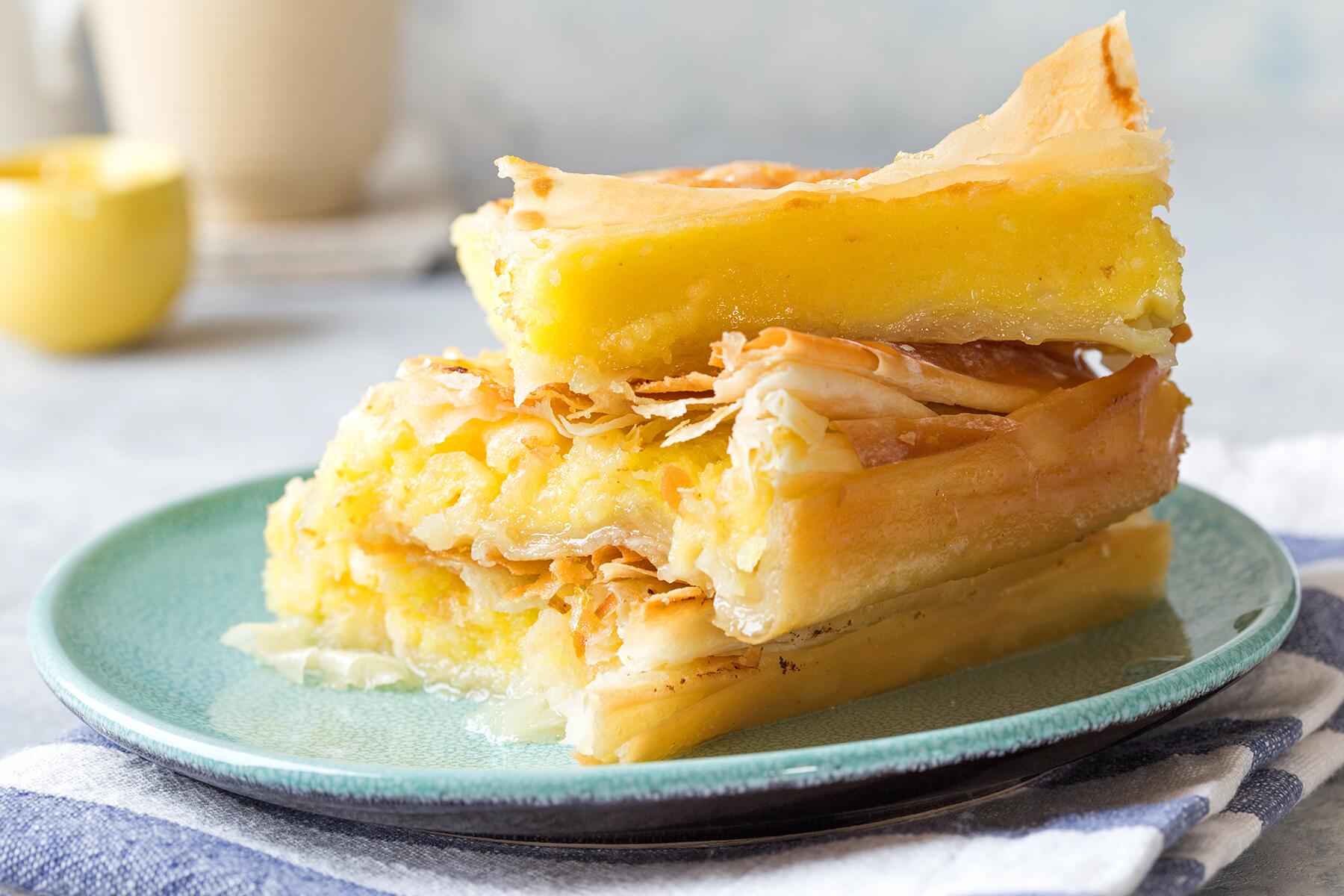 Come for the Meze, Stay for the Pastry

Perhaps even more notable than the many bustling tavernas and mezedopoleia, Thessaloniki’s many bakeries are the real stars of any food-centered trip to the city. Start the day with bougatsa (phyllo layered with semolina custard, cheese or minced meat) from Bougatsa Giannis or Serraikón, and don’t leave without trying devilishly sweet trigona—crunchy pastry triangles drenched in syrup and filled with cream—from Trigona Elenidi. For a trip back to the Ottoman era, stop by patisserie Chatzis—in operation since 1908—for syrupy deep-fried tulumba or comforting rizogalo rice pudding. Thessaloniki’s reputation as a center of innovation and creativity even extends to the realm of pastry: the invention of Thessaloniki’s number one brunch destination, Estrella, the “bougatsan” pastry hybrid sees the beauty of a classic croissant come together with the decadent custard-cream of a traditional Greek bougatsa. 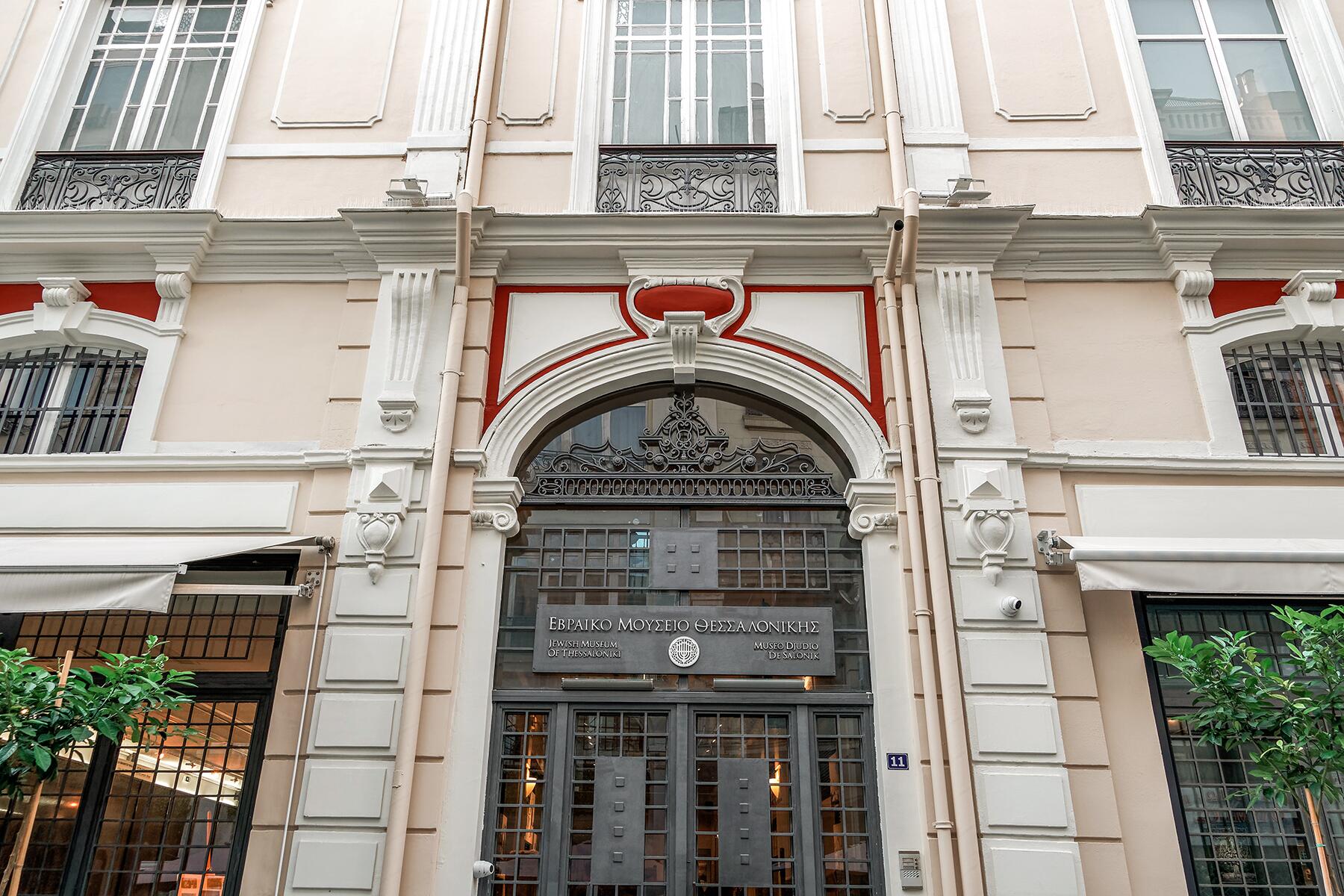 During the Ottoman era, Thessaloniki was among the empire’s most diverse trading cities. Sephardic Jews immigrated to the city following their expulsion from Spain in 1492, with their importance such that Thessaloniki would later be nicknamed “La madre de Israel” (The mother of Israel) and Ladino, a Judeo-Spanish language, could be heard throughout the city’s streets. Though Thessaloniki’s contemporary Jewish population is small, with over 95% killed during the Holocaust, traces of the community’s rich contribution are still visible today. Thessaloniki’s main market, Modiano, was built by prominent Italian Jewish architect Eli Modiano, while the waterfront Villa Allatini belonged to Moise Allatini, a prosperous Jewish merchant. A visit to Thessaloniki’s Jewish Museum offers an informative introduction to a history that comes as a surprise to so many visitors, while a memorial center dedicated to the Holocaust is currently under construction. 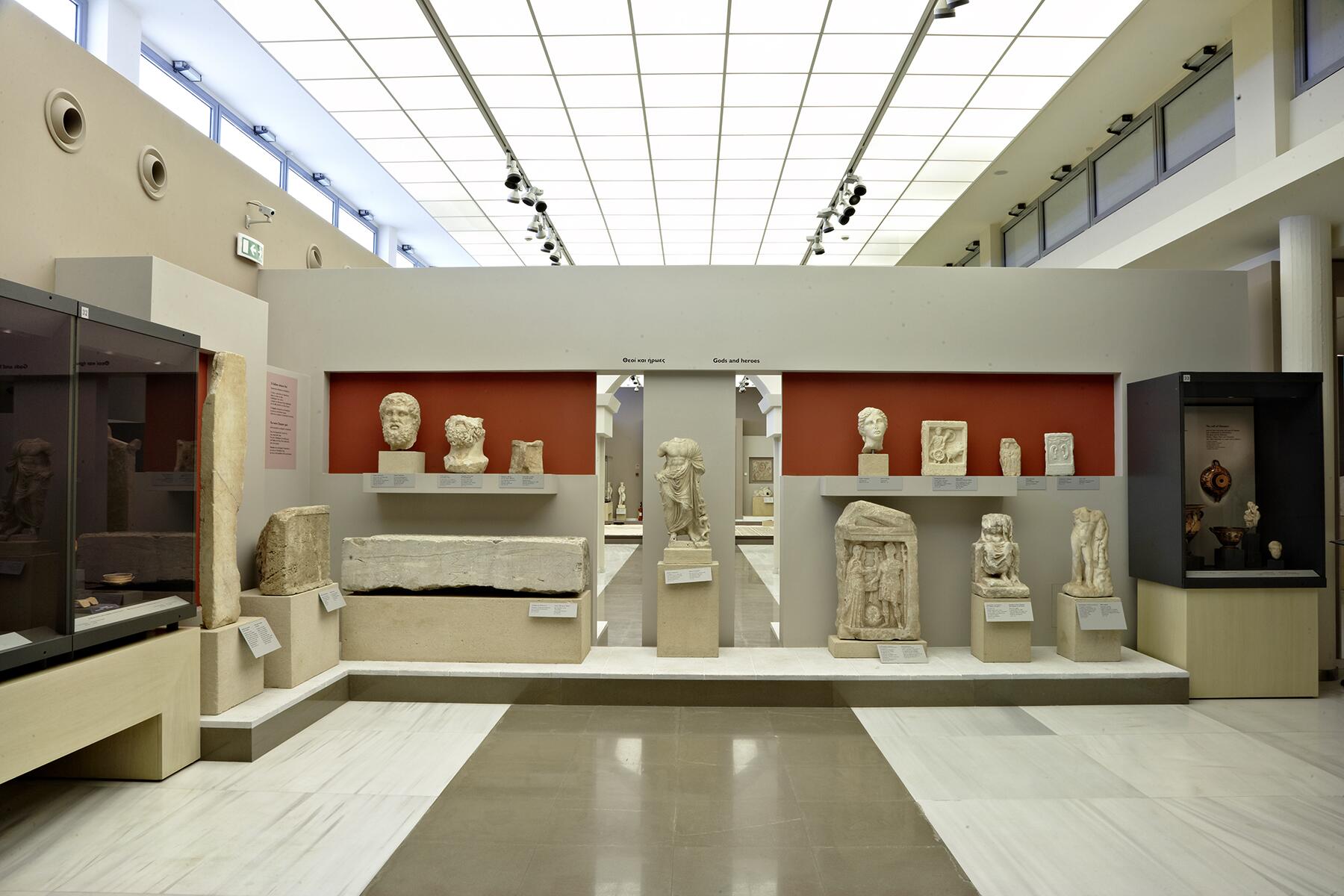 A Hub of Contemporary and Alternative Culture

With 15 UNESCO World Heritage Sites and 30 museums and galleries, Thessaloniki is a hive of culture and creative activity. In addition to the reputed Archaeological Museum and Museum of Byzantine Culture, the city boasts a range of contemporary cultural spaces. The State Museum of Contemporary Art houses the Costakis Collection, one of the world’s largest collections of Russian avant-garde art, while the Museum of Photography, set in a renovated port warehouse, is the only state-run museum in Greece dedicated entirely to photography. The city hosts some of the biggest film festivals in southern Europe (including the Thessaloniki International Film Festival each November, and the Thessaloniki Documentary Festival in March), along with the Thessaloniki Biennale of Contemporary Art and the Thessaloniki Queer Arts Festival. 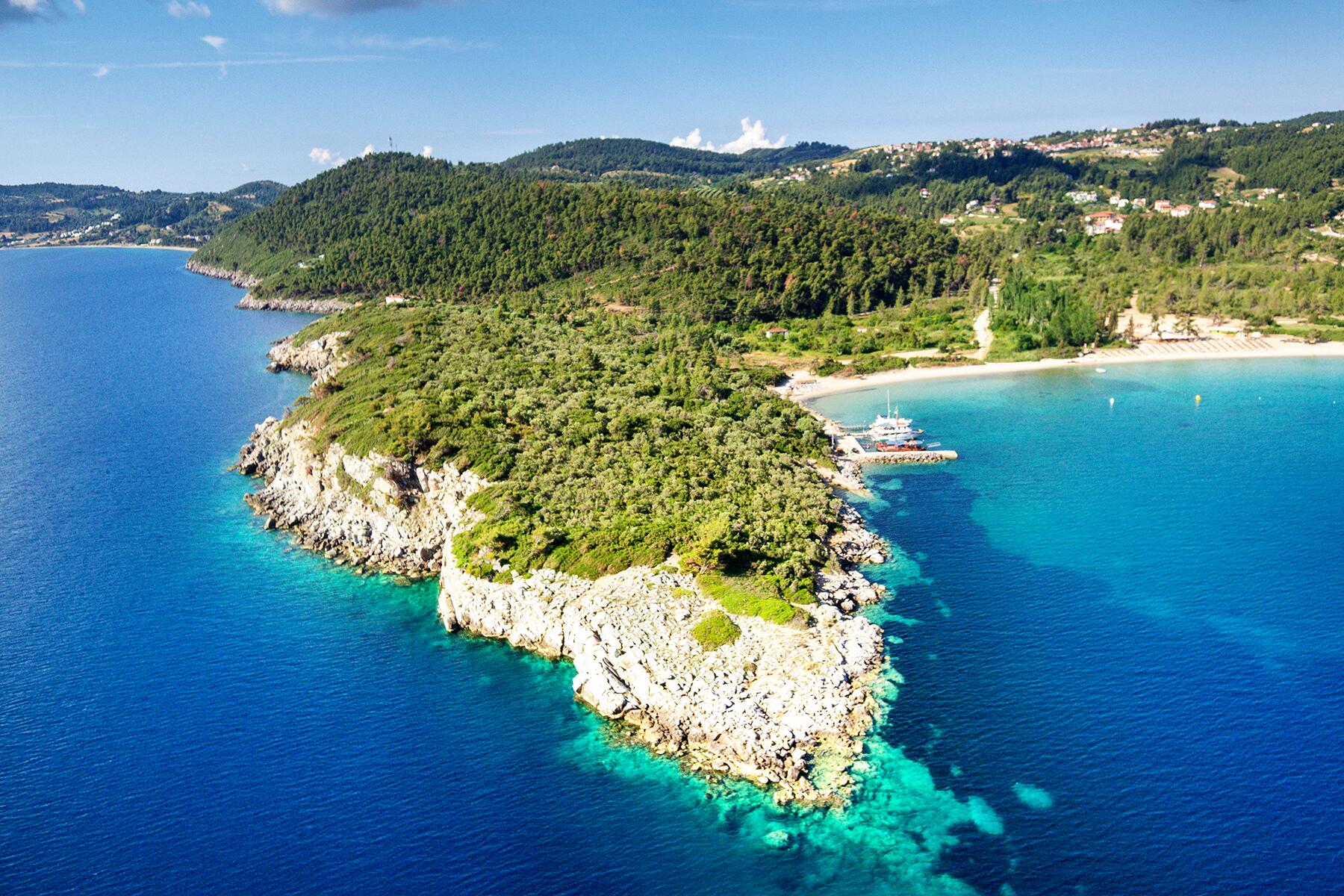 Beyond the conveniently located city beaches of Peraia and Agia Triada, Thessaloniki is just a short drive away from the tranquil waters of Halkidiki. Crowned by lush vegetation, Halkidiki’s three “fingers” (the Kassandra, Sithonia and Athos peninsulas) host some of the most beautiful beaches in Greece, along with significant archaeological sites such as Stageira, Aristotle’s birthplace, and the ancient city of Olynthus. The third jutting peninsula is home to Mount Athos, one of the most important centers of the Orthodox Christian world comprising 20 monasteries and around 2,000 monks. While the world’s oldest surviving monastic community is closed to women, and numbers of visiting men are limited, boat tours from nearby Ouranopouli offer a glimpse of the monasteries.