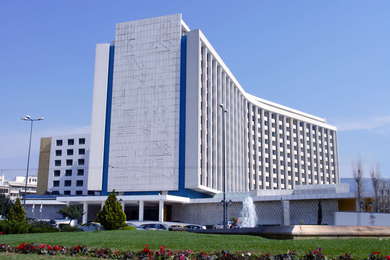 A classic choice for the high-brow traveler, the Athens Hilton has kept its standards high ever since it opened as one of Athens’ most “wow” hotels in 1963, having been the first ever chain hotel in the Greek capital. Since then it has welcomed the likes of Frank Sinatra, Ingmar Bergman, the International Olympic Committee during the 2004 Games and many VIPs. With awesome views of the Acropolis, a celebrated rooftop bar and restaurant and a large, luxuriant swimming pool lined by palm trees, it guarantees a quality stay. Its location, near the city’s poshest neighborhood of Kolonaki and several museums within walking distance just adds to the appeal.

While the impressive Hilton is one of the city's venerable architectural landmarks, it's also been kept up to date with its modern, clean-lined, and minimalist design. Along with a gym and a spa, the hotel has the biggest hotel pool in Athens (open from May to October only). It also boasts a branch of Milos Restaurant, Manhattan's luxe Greek eatery and the Galaxy rooftop bar, which despite its high prices remains a favorite with hip Athenians.

YOU SHOULD KNOW The Athens Hilton is a landmark in its own right both because of its reputation as a top hotel and for its architectural uniqueness, the hieroglyphic reliefs on its exterior really make it stand out. A new northern wing was added prior to the 2004 Olympic Games increasing the hotel capacity to 506 rooms and suites in total.

Like the hotel itself, many of the rooms, even those on the sympathetic extension, reflect an aesthetic that blends classical beauty with minimalist, contemporary decor, with a focus on comfort but also work. Large, soft, comfortable beds with white bed linen, large windows that look out on often hearteningly scenic views (the even-numbered rooms look out to the Acropolis) and let in plenty of light, and flat-screen TVs as well as other hi-tech essentials ensure satisfying comfort.

YOU SHOULD KNOW Guest rooms are fitted out in light wood, brushed metal, etched glass, and crisp white duvets. 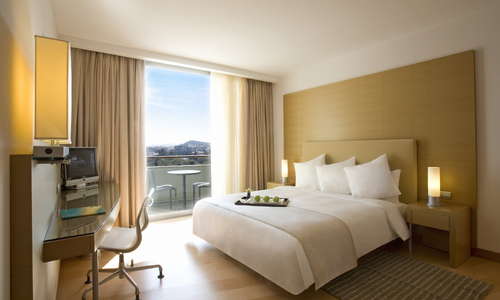 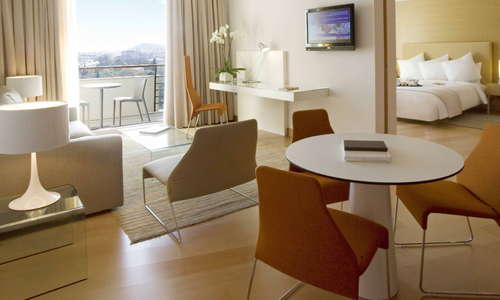 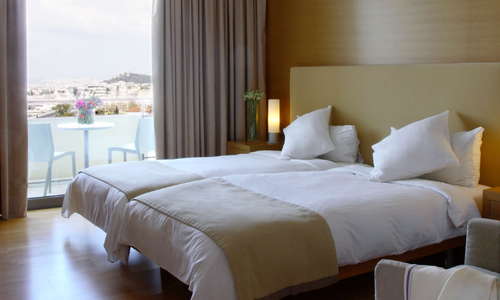 YOU SHOULD KNOW The Athens Hilton is one of the few in Athens catering to individuals with special needs. Apart from a wheelchair ramp in the entrance, it has two accessible twin rooms with wheel-in showers, toilets with grab-rails and bed-risers among other features and services.

The once-traditional lobby is a vast expanse of white marble punctuated by sleek, mod benches. Rows of giant and rotund muted gold columns express a sense of grandeur that is juxtaposed with ultra-modern cubic white sofas in a large, somewhat impersonal, yet functional landing-spot.

YOU SHOULD KNOW Facilities are business-oriented, with a stylish executive check-in lounge and huge conference rooms. 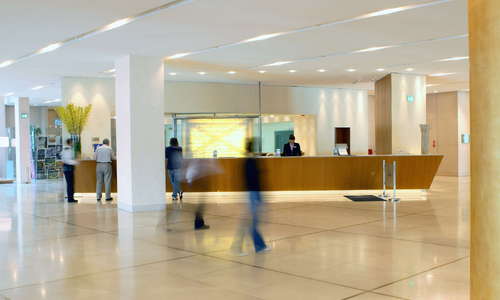 Athens' largest and deepest hotel pool (25m x 15m), attractively lined with palm trees, is an excellent place to spend a hot, sunny day if you're tired of sight-seeing. With showers, changing rooms, a complimentary towel and Oasis Bar & Grill for tasty snacks and refreshments, the hotel makes such a mission very easy for you. 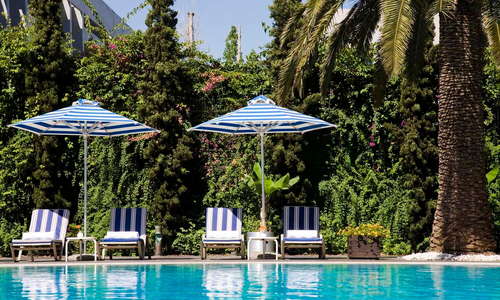 If you want to take the salute per aqua experience to another dimension, visit the luxurious spa in the hotel. The Hiltonia Spa is one of the best hotel spas in Athens, with an indoor heated pool and a multitude of treatments (beauty and therapy) using Germaine de Capuccini products. The sauna, steam room, and hydro-massage are all part of the package.

A small, naturally lit gym with all the basic equipment for an invigorating training session. A personal trainer can be booked upon appointment.

Two of the Hilton’s dining areas are highly popular with outside guests too--the Byzantino, which serves one of the most plethoric and delicious breakfast spreads in town, as well as a choice of gourmet Mediterranean-inspired dishes for lunch and dinner, and the Galaxy restaurant that serves an edgier rendition of Mediterranean specials with a notable Asian cuisine twist. At Milos, the hotel’s swanky seafood-centered restaurant, you can enjoy the catch of the day while running shoulders with local celebs.

The hotel’s Galaxy bar continues to make it to the lists of Top Ten Best Rooftop Bars written about Athens the world over. With a funky '60s planetary vibe that is very much addressed to the present day, the overpriced menu is probably worth the astounding sunset and nighttime views over the city’s most glorious landmarks, and the stars, of course. 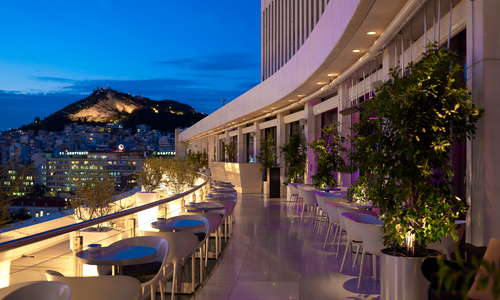 The nearest metro station of Evangelismos is a 5-minute walk away, and the next stop is Syntagma Square, where the Parliament Building (where the Changing of the Guard ceremony takes place) and Athens’ main shopping area is. Evangelismos is also on the Blue Line, which heads directly for the Athens International Airport (around 40 minutes away). Taxis are easy to find outside the hotel or just pre-book at the lobby.

Greek highbrow Cookoovaya (2-minute walk), Oroscopo for Italian indulgence (10-minute walk), Vasilenas for cosmopolitan vibes and Aegean fish (5-minute walk), CTC for an experimental gourmet feast (15-minute walk), and, if returning from a legendary night out and seeking a quick street-food bite, the food truck on Michalakopoulou st., just behind the Hilton.

You can’t stay at the Athens Hilton and not at least sip a glass of wine at its rooftop Galaxy Bar, but there are plenty of nearby options to explore too. Neighbouring Kolonaki offers an endless choice, as does nearby Pangrati to a lesser extent. Closest of all (5-minute walk) are CV Distiller (with over 500 malt whisky labels), Tapas Bar for a warm ambiance and Sui Generis for an old-fashioned feel.

It’s a classic that has maintained itself very well throughout the decades, in keeping with the times and managing to meet needs of even the most demanding international VIP and eclectic guests. The in-house amenities--spa, pool, restaurants, and bars--are good enough to keep you on home ground and the location places you at a crossroads between some of the city’s most visitable areas. 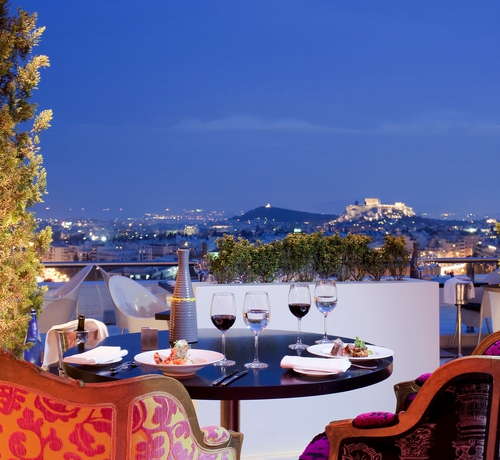 #3 The Best Hotel Restaurants in Athens

#5 The 7 Most Luxurious Hotels in Athens

#5 The Best Hotel Bars in Athens 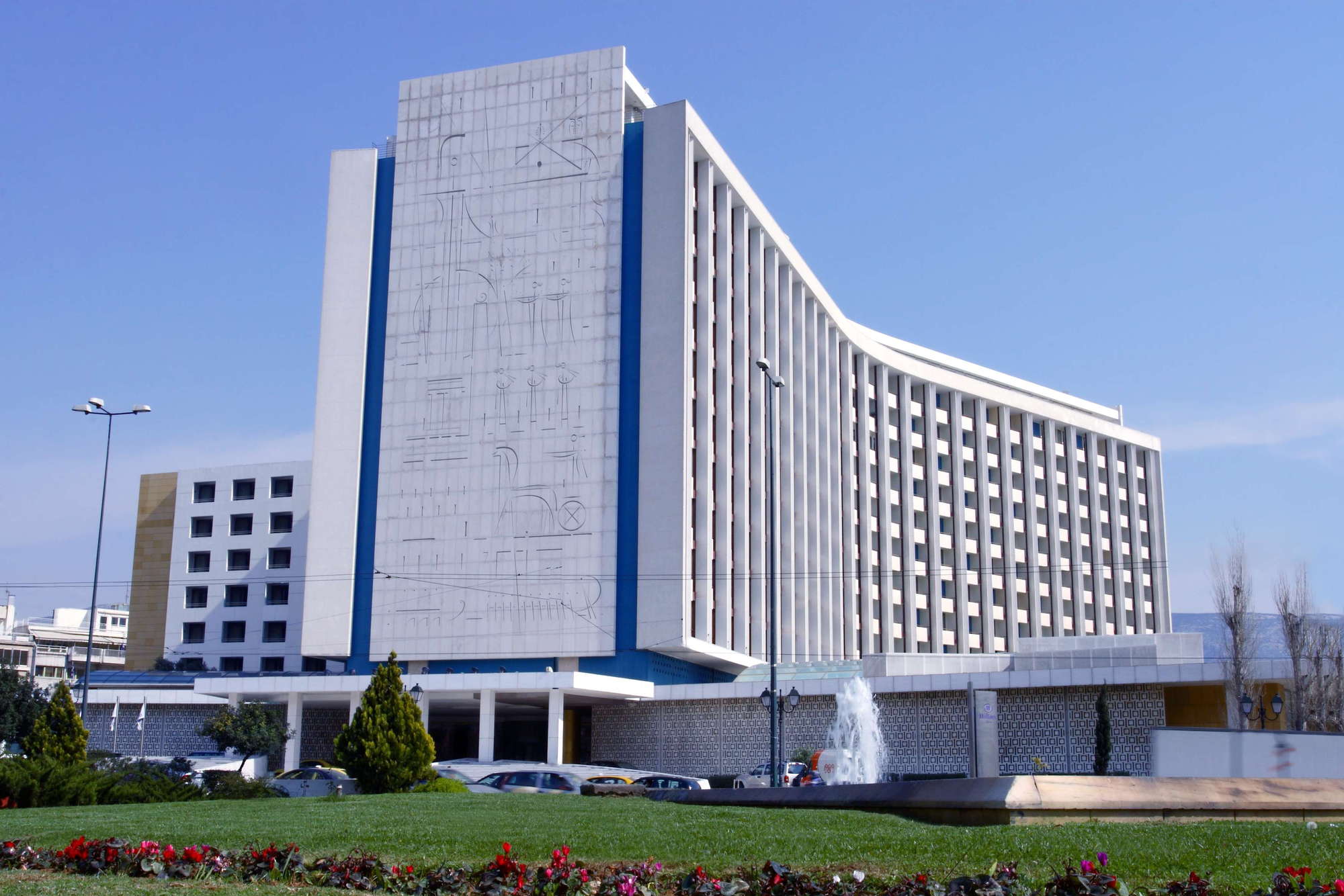 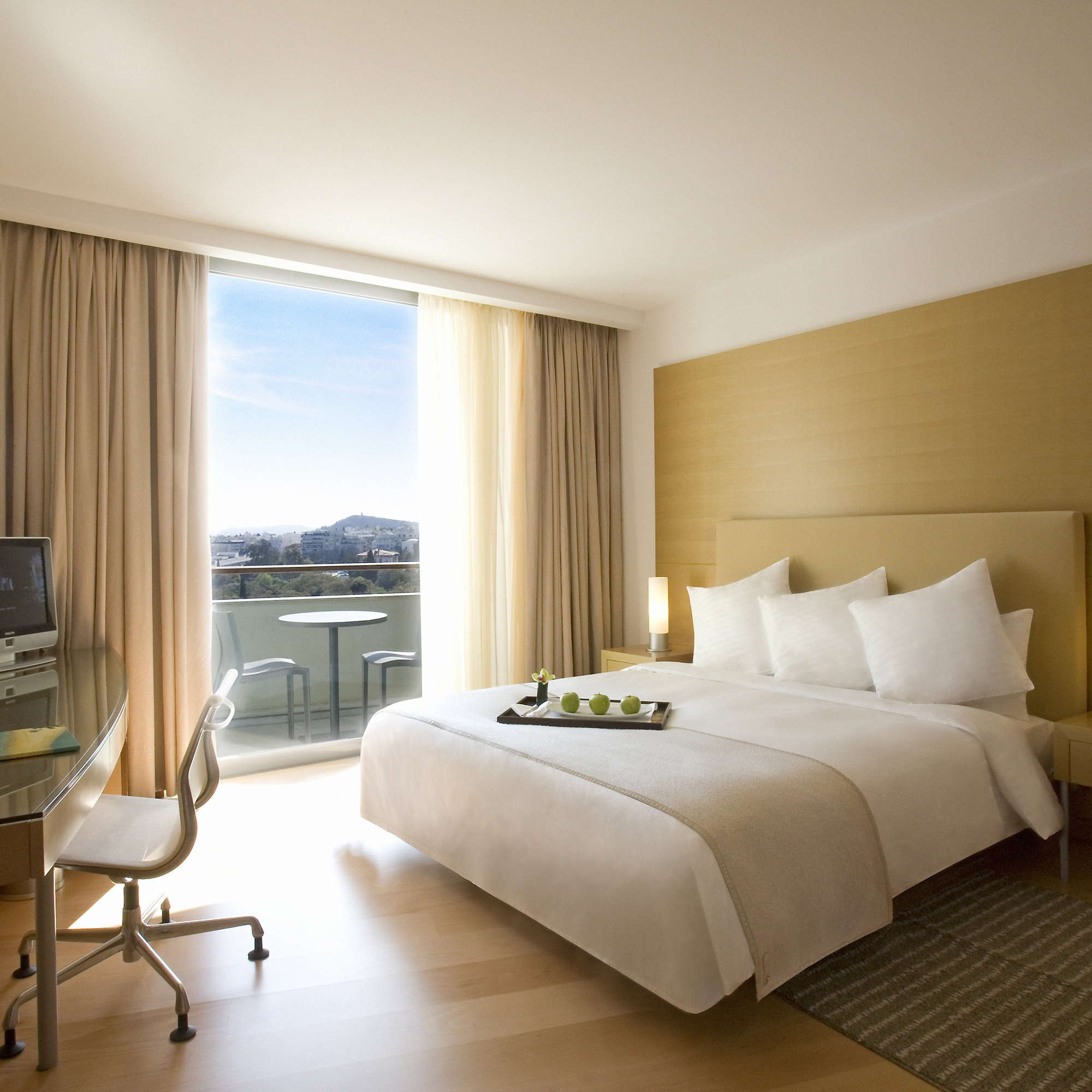 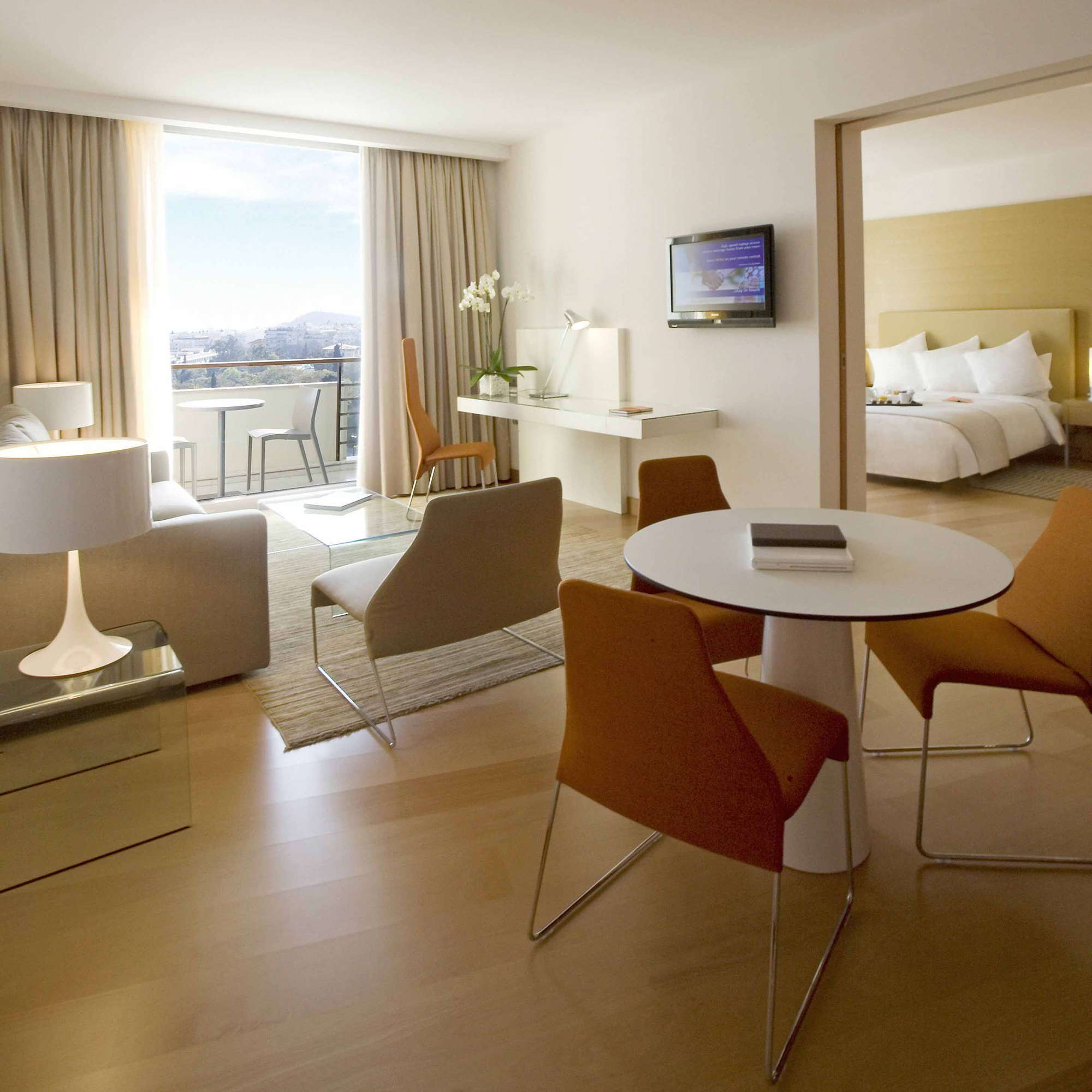 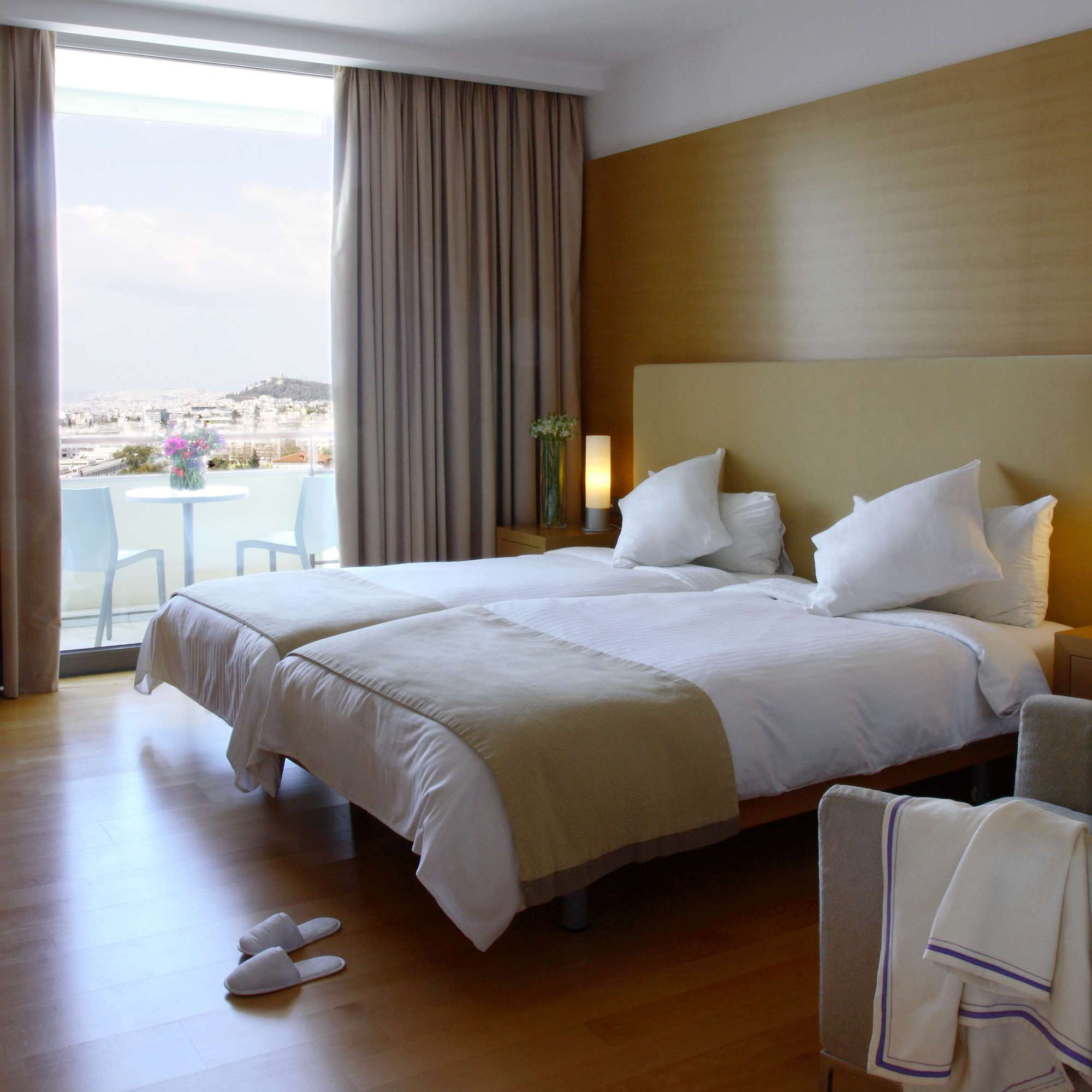 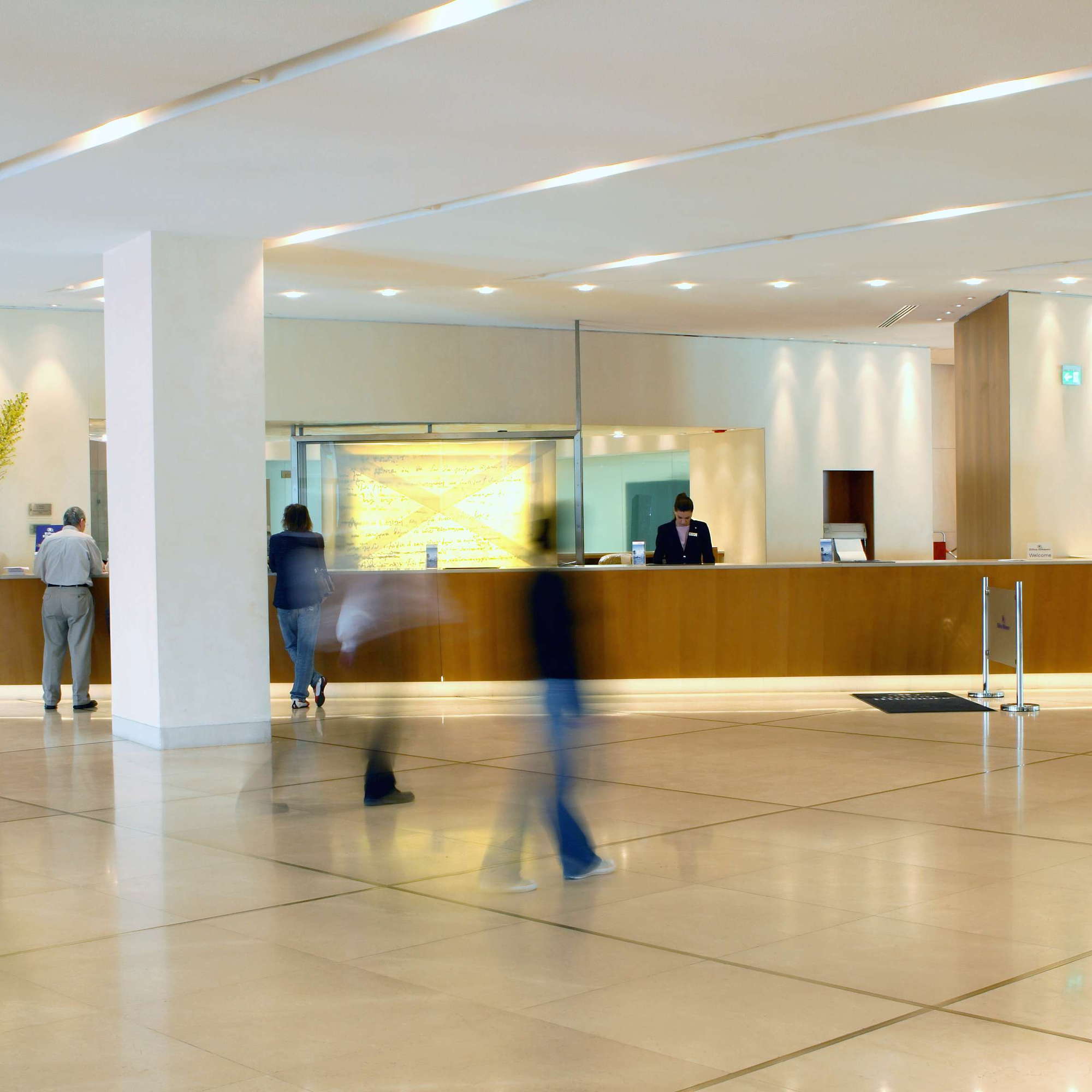 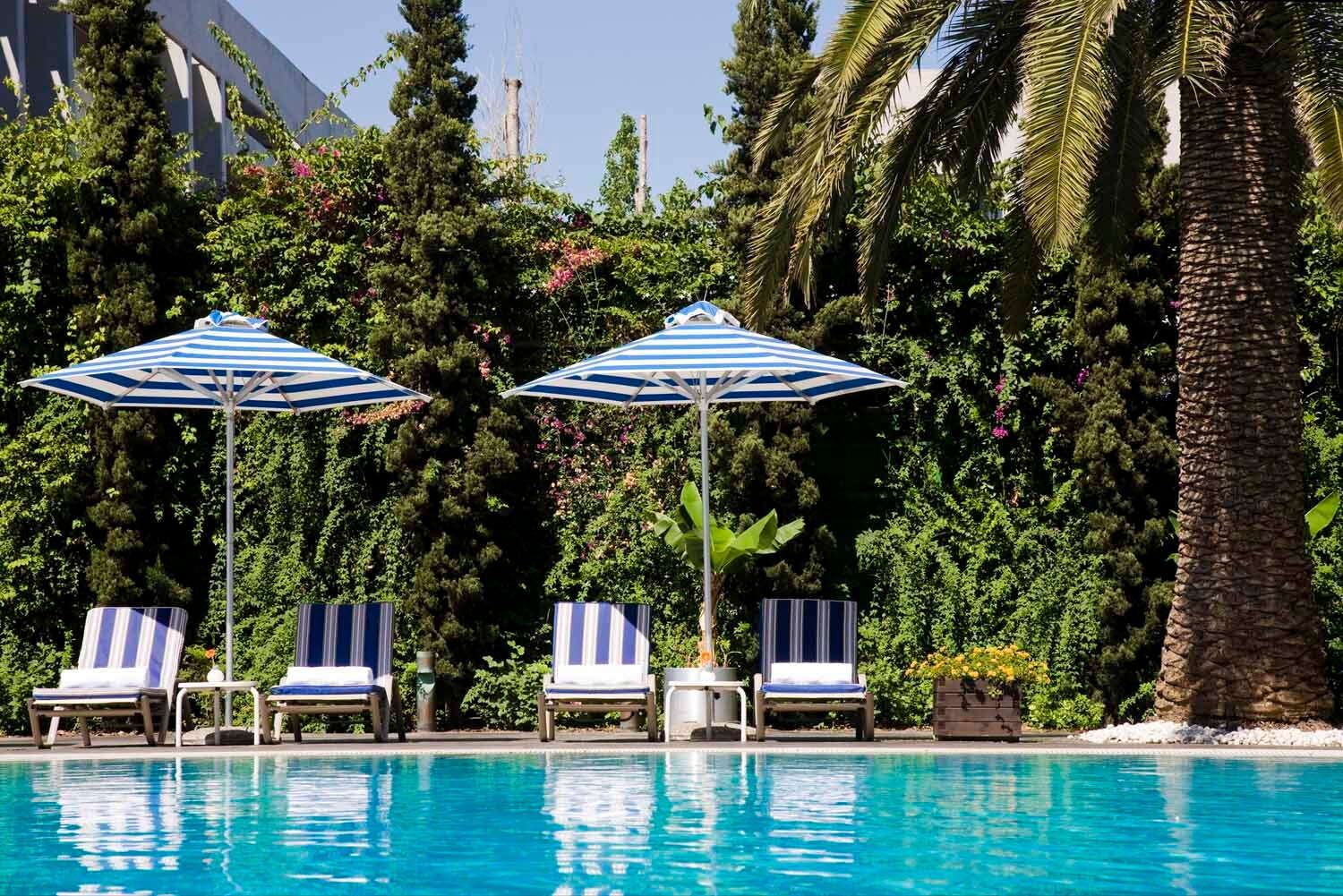 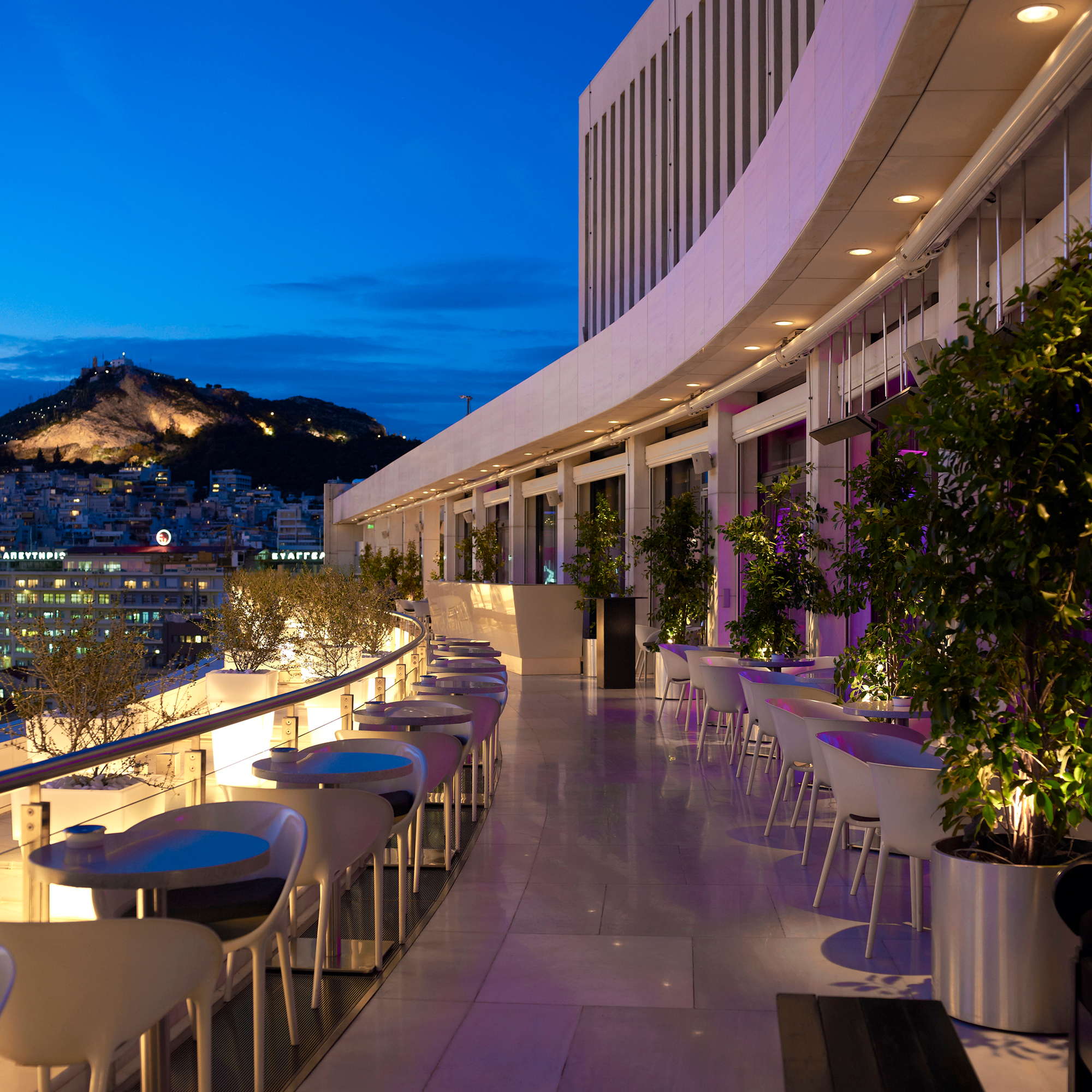