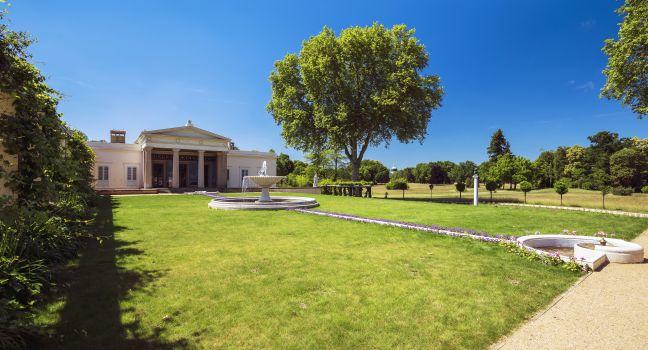 After Frederick the Great died in 1786, the ambitious Sanssouci building program ground to a halt, and the park fell into neglect. It was 50 years before another Prussian king, Friedrich Wilhelm IV, restored Sanssouci's earlier glory, engaging the great Berlin architect Karl Friedrich Schinkel to build the small Schloss Charlottenhof for the crown prince. Schinkel's demure interiors are preserved, and the most fanciful room is the bedroom, decorated like a Roman tent, with walls and ceiling draped in striped canvas.

Friedrich Wilhelm IV also commissioned the Römische Bäder (Roman Baths), about a five-minute walk north of Schloss Charlottenhof. It was also designed by Schinkel, and built between 1829 and 1840. Like many other structures in Potsdam, this one is more romantic than authentic. Half Italian villa, half Greek temple, it is nevertheless a charming addition to the park.