Kayak through canyons, drinks wine at a schoolhouse, and visit one of Stalin’s hangouts.

When you think of the Republic of Georgia, your mind might automatically go to natural wines and vast vineyards, the trendy capital of Tbilisi, and foods like dumplings and khachapuri. Though these are all musts for any first-time (or—who are we kidding?—all visitors), you might yearn for more under-the-radar adventures. Georgia is about expecting the unexpected; from remnants of the Soviet era, to unsurpassed views, to just plain kitschy, we recommend you seek out these offbeat experiences.

Visit This Decaying Sanitarium Where Stalin Used to Take Baths

Located in the Imereti province of Georgia, the Tskaltubo spa was once a destination for the Soviet elite. The radon-carbonate mineral water is believed to cure or prevent a host of diseases (as a poster in the lobby will tell you), from Osteochondrosis to various skin diseases, diseases of the endocrine system, urologic diseases, and more. If this sounds like the stuff of fiction, or of the past, think again—today tourists and Abkhazian and Ossetian refugees still come to these formidable “sanitarium” resorts for these “medical procedures.” Some of the surrounding buildings have fallen to decay; weeds sprouting up through tile and light filtering in through cracks in the ceiling create an urban explorer’s paradise. But the main structures are very much intact, if not under construction, and still reflect the Soviet times in which they were erected. As the hosts will tell you, Joseph Stalin had a favorite spa, which is partially under renovation (but you can still visit), called simply, “Spa #6.”

Kayak in the Azure Waters of Martvili Canyon

In west Georgia in the village of Gachedili in the country’s Samagrelo region, vendors churn out fresh, fuchsia-colored pomegranate juice outside Martivili Canyon. This naturally-formed spectacle is made up of moss-covered coves, so bright an emerald they almost glow, and azure waters that look fantastically artificial. Here you can book a kayaking trip in a four-person inflatable kayak. You’ll be attached to your guides as you glide over smooth rocks and turrets, through damp coves and over crystal waters, looking up as a rain mists overhead, and out to gargantuan waterfalls.

Luarsab Togonidze is something of a Renaissance man. Not only does he helm Tbilisi’s local fusion restaurant, Azarphesha, where he will greet you in a Georgian costume called a chokha and sing traditional Georgian ballads a cappella, he also has his own clothing line and boutique called Samoseli Pirveli, where he sells wearable clothes inspired by traditional Georgian attire—think embroidered velvet capes and shoes. Togonidze has infused new life into these looks by drawing on his own family’s history and rifling through sartorial literature and photographs. “Most importantly,” he says, “everything is done with love.”

Get Coffee in the Middle of Nowhere

Blink and might miss this small wooden coffee hut, en route from Tbilisi to Georgia’s Kakheti region. This modest structure overlooks valleys from atop a hill and serves Turkish coffee to visitors. A helpful sign in the middle of the road clarifies that in one direction there’s coffee, and in the opposite direction, there’s none. Aside from getting your caffeine fix in a picturesque spot, it will make a great photo opp.

Some may call it propaganda, but there’s no denying the spectacular beauty and feat of this wraparound mosaic looking out onto the snow-capped Caucasus mountain range. Built in 1983, the work of art tells the story of Georgia-Russia relations and honors the bilateral Treaty of Georgievsk between Georgia and Soviet Russia, establishing eastern Georgia a protectorate of Russia. Some liberties are taken in the depiction of this history, with fantastical elements and an omission of some of the aftermath of the treaty, but it’s a spectacle nonetheless. 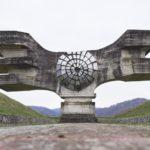 Kazbegi is about as north as you can go in Georgia, and once you’re out there, it gets pretty remote. There are about only two places you can stay if you visit, and only a handful of eateries. The views, though, are unparalleled. Below Mount Kazbegi, 2,170 meters high, is the 14th-century Gergeti Trinity Church, inhabited by five monks. Those with substance abuse problems are also welcomed to come here for rehabilitation free of charge. If you are staying at Rooms Hotel Kazbegi, the hotel can arrange an off-road trip up to the monastery. It’s totally worth the views, but be sure to hang on tight during your ride.

Stay for a Writing Residency at the Writer's House

Built in the early 20th century, this art nouveau mansion hosted literary events and feasts in its heyday. After one of its owners was forced to flee the country during the Sovietization, the house was given over to writers and artists and was called the Palace of Arts in the 1920s. Up until 2007, the house was owned by the Georgian Writers Union, and today, that tradition lives on in the form of a writing institution, which hosts exhibitions, symposiums, and literary readings. Outside in the bucolic terrace is Cafe Literra, run by chef-owner Tekuna Gachechiladze, one of the most innovative and respected chefs of nouveau Georgian cuisine.

Going to school on vacation might not sound like a great idea, but there’s a good chance you’ve never seen anything like this schoolhouse in Kutaisi. The schoolmasters here teach highly intellectual concepts of science and technology to their students at this charter school. The building itself is as quaint as you’d expect, with spiral staircases throughout and a rooftop with cozy nooks for reading or napping. In the basement, the students actually help produce natural wine with local grape varietals. The information center in Kutaisi would be happy to arrange a tour for you.