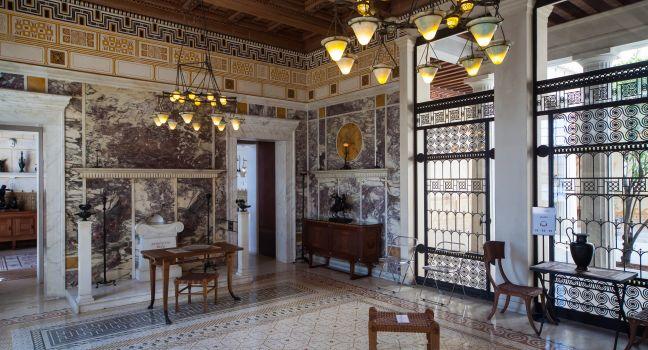 One manifestation of Beaulieu's Belle Époque excess is the eye-popping Villa Kerylos, a 1902 mansion built in the style of classical Greece (to be exact, of the villas that existed on the island of Delos in the 2nd century BC). It was the dream house of amateur archaeologist Théodore Reinach, who hailed from a wealthy German family, helped the French in their excavations at Delphi, and became an authority on ancient Greek music. He commissioned an Italian architect from Nice, Emmanuel Pontremoli, to surround him with Grecian delights: cool Carrara marble, rare fruitwoods, and a dining salon where guests reclined to eat à la grecque. Don't miss this: it's one of the most unusual houses in the south of France. Organized through the tourist office, tours in English (€5) depart every Thursday at 9:30. Note that a combination ticket allows you to also visit Villa Ephrussi del Rothschild in St-Jean-Cap-Ferrat within the same week.