It’s a bittersweet escape that shows just how different a brand can be in another country.

Did you know that Big Bird is periwinkle in the Netherlands? Or that PBR–the cheap beer of college–is considered top shelf in China? No, we’re not in the Marvel multiverse. It’s well-researched, calculated marketing, the age-old practice of changing your product to better suit the tastes of a different consumer base. And no hospitality brand is more successful at this than The Walt Disney Co.

The tourism industry calls it the “Disney difference,” an acute, often magical attention to detail. Disney Parks around the world shift to cater to the market and it’s fascinating just how different each mouse house can be–especially come Pride Month.

No park shakes up the American Mickey Mouse mold more than Disneyland Paris. And over at Parc Walt Disney Studios, the resort’s second theme park, right in front of the statue of Walt Disney, there’s Pride in June. As in, an actual Pride parade inside the park with Mickey and Minnie in official Pride outfits. Sure, the U.S. Disney Parks have rainbow merchandise and seasonal snacks, but Disneyland Paris is unapologetically queer with its own Pride celebration. It’s a surreal, euphoric must-do for queer Disney fans. It’s also a bizarre, sad juxtaposition of American Disney Parks, especially after a spiral of anti-LGBTQ+ actions in Florida and company allegations in California this year which have left many Disney fans feeling pretty sour. As an American theme park journalist, the spell has been broken and I’m devastated. So, I booked a flight to Paris. And what I found melted my cold, queer heart.

This isn’t the first year Disneyland Paris rolled out the rainbow carpet. The milestone event debuted in 2019, making history as the first Pride event at any Disney property. The Walt Disney Co. has sponsored Pride parades before, from L.A. Pride to Orlando’s Come Out With Pride, but this was the first time Disney threw its own Pride–albeit a specialty $117 per ticket event–on Disney soil. And after two years of pandemic cancellations, it came back on June 11.

If you’ve ever been to an after-hours ticketed event at Disneyland or Walt Disney World such as Mickey’s Not So Scary Halloween Party or Disney Very Merriest After Hours, Disneyland Paris Pride follows the same formula with exclusive entertainment, food, lighting overlays, a parade, character meet and greets, and select rides open with little-to-no wait. Gates opened at 8 p.m. after the park officially closed, there was a dedication at 8:30 p.m., and the parade started at 8:45 p.m. The sun set and the Tower of Terror ride became a rainbow-clad backdrop for a stage in Production Courtyard all night long. Performances included Becky Hill, Bilal Hassani, MIKA, and a DJ dance party that sampled a lot of ABBA. But you could also find Mickey, Minnie, Goofy, and Pluto dancing the night away to iconic queer songs, from Lady Gaga to Cher. Then, the clock struck 2 a.m. and it was over. Unlike U.S. Disney Parks, seasonal eats and offerings aren’t available throughout the month of June. This Pride is very much a one-night-only paid event. So, in some ways, Disney World is the most queer-friendly park.

Disney World really, really tried this year, either because park leadership knew the world would be watching come June or because leadership listened to demands from employee walkouts. Or both. Either way, the queer offerings at Disney World for Pride Month this year are more robust and authentic than ever before. For the first time, the intersectional Pride flag featuring trans Pride stripes and BIPOC stripes have been incorporated into signs and photo experiences in each of the resort’s four parks. There are even photo props featuring identity Pride flags never before used in Disney history such as the intersex, asexual, gender non-binary, and pan-sexual Pride flags. Select themed food uses the Philadelphia Pride flag with black and brown stripes, and for the first time ever, there’s even a trans Pride food offering. It’s a solid, more authentic step in the too-often rainbow-washed corporate programming. It’s also the first time I’ve ever seen my own identity and my wife’s identity represented in Disney media. And that means something as a fan who’s still waiting for LGBTQ+ main characters in Disney content. On paper, it looks like Disney World really stepped up and is the gayest park of all! But, it’s not. Something about Disneyland Paris Pride, a six-hour flash in the pan, felt more authentic. Why? Cast Members. The magic always comes from Cast Members.

The parade wasn’t like anything I’ve ever seen from Disney Parks entertainment. Because it wasn’t polished with perfectly choreographed dancers. It’s just Cast Members and their families. And, yes, there was choreography to the original song “Around the World” which was released in 2021 and is now the official theme song of Disneyland Paris Pride. But it wasn’t perfect. And I loved it. There was lo-fi ‘80s ribbon twirling and no one’s white pants matched and my cheeks twitched from smiling too long. It was casual and familiar, like a small-town parade. It felt like thousands of guests had accidentally been invited to the company’s behind-the-scenes family picnic. Because there were so many families, especially families with children. I’ve been to some of the biggest Pride marches and parties in the world but big events tend to skew more adult and more banana hammock. Not that there’s anything wrong with banana hammocks. I’ve just never seen so many LGBTQ+ families. I’ve never seen so many people who looked like me with a spouse who looked like my wife with children. And these families were so happy, so incredibly happy just laughing and watching the parade together. I felt myself absorbing this joy and strength–maybe happiness for myself, maybe confidence as I grow into my own–and it got me. Hoo boy. It got me. I knew I’d tear up when I saw Minnie Mouse, my favorite, roll through in her Pride outfit. But I wasn’t prepared for the overwhelming, radiating lump-in-your-throat-if-you-try-to-hold-it-in tears that hit me when I saw all of these families. 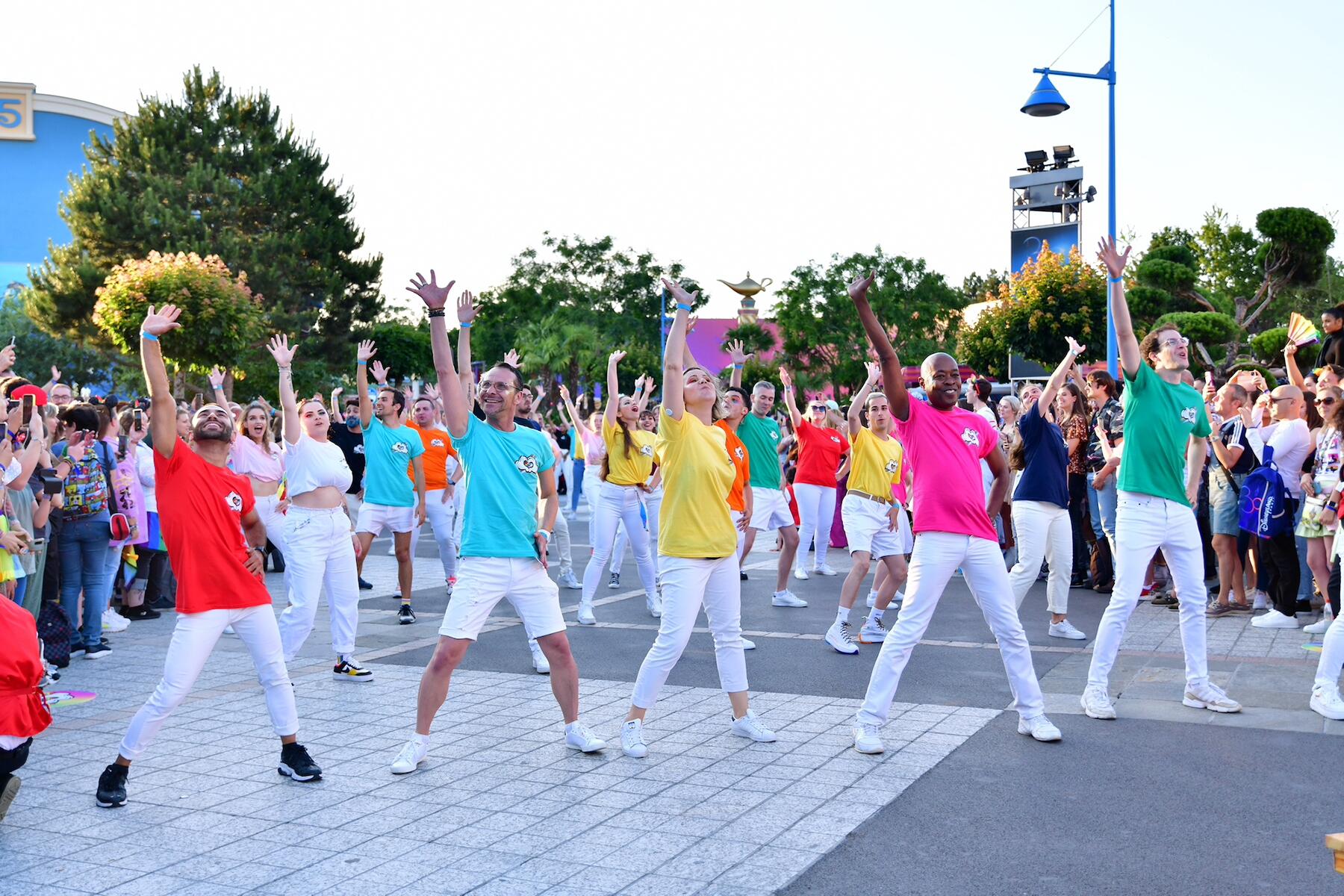 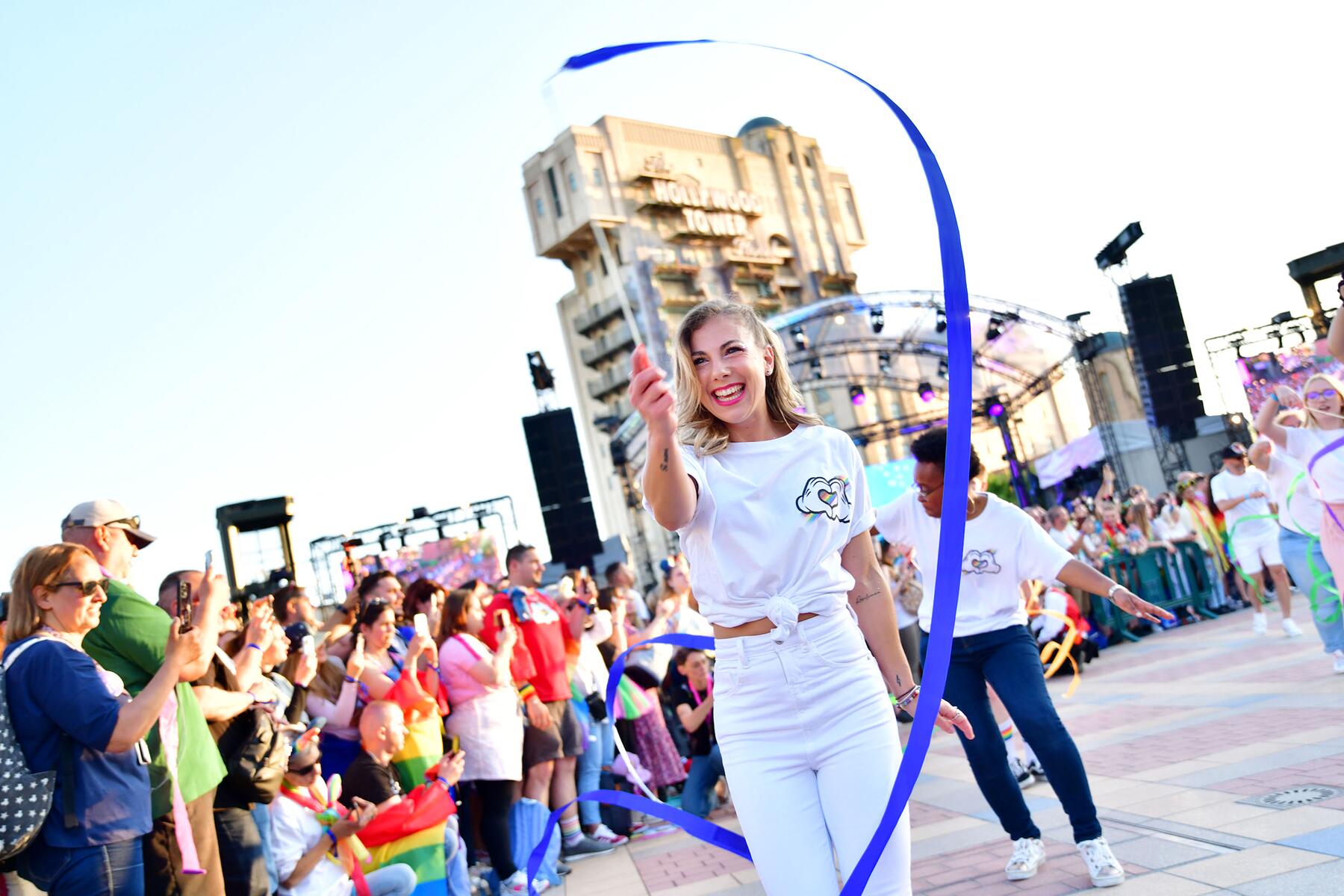 It got me because in the United States, queer families–especially families with trans children–are under attack. The vibe is far from Mickey in an ombre rainbow tee with an official gay Instagram account. Despite the Pride-themed cake pops and merchandise with 100% proceeds that go to queer charities in June (which, full stop: is very, very good), Disney World–not The Walt Disney Co., but Walt Disney World Resort–gave money to anti-queer legislatures again and again and again. Disney leadership never apologized for funding the people who funded Florida’s Don’t Say Gay bill. They just said they’d pause political giving, which feels like a pretty big door is still open for it to happen again. So to have this experience in a Disney park that felt so honest and transparent gives me hope. Maybe it can be the blueprint for Prides around the world at every Disney Park. Disney donating to queer groups, especially the most marginalized groups within the LGBTQ+ community, is great. But there’s power in using theme parks as a literal platform for the queer community. It’s magic that Disneyland Paris has figured out. And I hope it lights the way for U.S. Disney Parks.

At the end of MIKA’s performance, the Tower of Terror displayed a countdown. 5, 4, 3, 2, 1. And then the lights came back on to reveal that only some of the letters on “The Hollywood Tower Hotel” sign were lit. And they were rainbow. One L. One O. Half of a W. And an E.