Paris rang in the New Year with a multitude of exciting events, starting with the long-awaited reopening of the legendary Musée Rodin. With Valentine's Day approaching, now is an ideal time to take advantage of low winter fares for an amorous weekend at one of Paris's new hotels, with dinner in a gourmet bistro to experience what the City of Lights does best: romance. 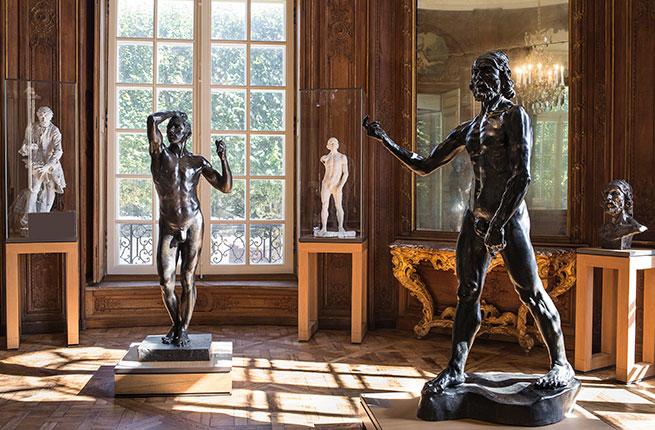 Not since Rodin lived and worked here has the graceful Hotel Biron received a facelift of this magnitude. Saved from demolition by the artist when he moved his studio here in 1908, the former convent became so integral a backdrop for Rodin's work that he bequeathed his entire output to France on the condition his work remain at the Hotel Biron. Now, after a $17.4 million renovation, the gorgeously restored Musée Rodin features the sculptor's rarely seen early paintings, his private art collection, and sculptures by his famous pupil and lover, Camille Claudel, along with all the masterpieces of his oeuvre.

The Centre Pompidou's ambitious Anselm Kiefer show (through April 18) is the German artist's first French retrospective in 30 years, and features 150 works on paper, monumental paintings, some 40 glass “display cases,” and a site-specific installation all around the themes of alchemy and the Kabala, destruction, and rejuvenation. The artist, who has lived in Paris since 1992, looks at the recent events in France and Europe through the lens of German romanticism, evident in the melancholy grandeur of these beautiful, penetrating works. 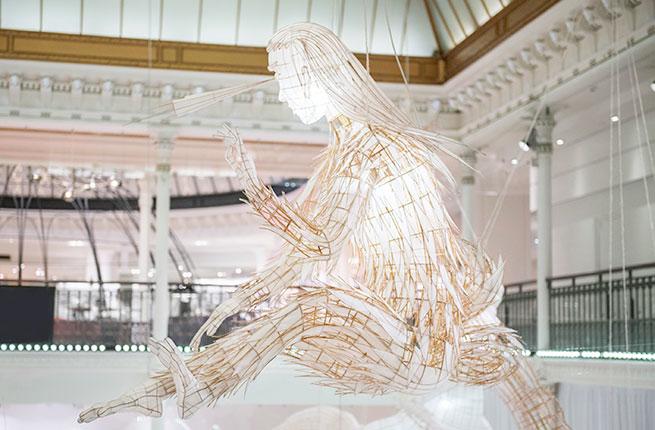 Chinese artist Ai Weiwei's largest exhibition to date in Paris appears at Le Bon Marché, the left bank's chic department store, until February 20. This fantastical series of mythological creatures, handmade with the help of 12 Chinese kite-makers from bamboo and white silk, were constructed with the age-old techniques. Titled Child's Play, the three-part show fills the outside windows in front with 10 vignettes, and inside the store 20 glorious creatures—including a many-headed dragon, a winged fish, and menacing birds—soar above the store's central lobby. A 65-foot-long dragon guards the main floor.

Pablo Picasso, the most influential artist of the 20th century, made an indelible mark on the artists who followed him, many of whom grappled with his influence as a mentor and artistic father. Insightful, fascinating, and often hilarious, the beautifully articulated show Picasso.mania, at the Grand Palais through February 29, juxtaposes Picasso's emblematic works with those of contemporary artists (Johns, Lichtenstein, Hockney, and many more) illustrating the pervasive influence of all of Picasso's great stylistic phases in almost every medium, including painting, photography, film, video, installation, and graphic arts.

Beginning March 8, the Musée Picasso examines the diversity of the master's sculptural works and the creation process from drawings, prints and photographic enlargements to the original finished sculptures. The exhibition, titled Picasso. Sculpture, reunites seminal works from several sculptural series spanning decades of the artist's output, including “Absinthe Glasses” and “Bathers.” 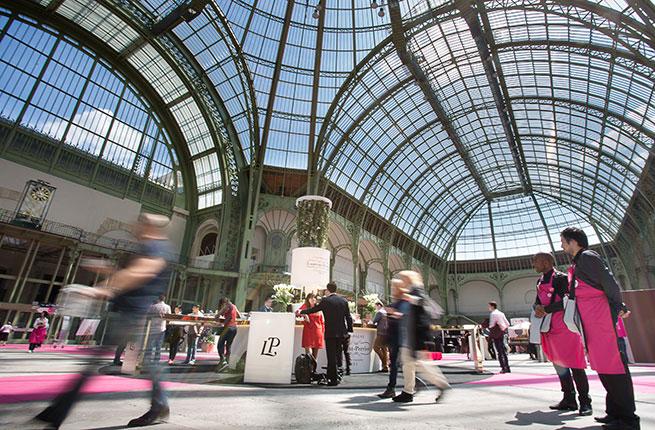 Following the huge success of the first iteration in 2015, this year's Taste of Paris (February 11–14) will once again offer a rare opportunity to taste the gastronomic creations of Paris's great Michelin-starred chefs from the city's top tables—Alain Ducasse from the Plaza Athénée, Guy Savoy, Lucas Carton, Le Pré Catalan, and many more. Entry is €15 or you can splurge on a Gourmet Pass (€45) or Premium Pass (€120), which includes jump-the-line privilege, access to the champagne bar, and €45 in food credits (dishes cost between €6–€12).

Foodies unite at the annual Omnivore Food Festival (March 6–8) dedicated to “young cuisine.” The Paris-based organization, with its own publication and yearly awards, tours the world discovering new talent and celebrating young chefs' contributions to the world of gastronomy. This year, the festival will feature a series of demonstrations titled Sweet & Savory, Street Food, Artisan, and Avant-Garde.

One day a year, the capital's top pastry makers offer their own special versions of Paris's favorite sweet, the delectable almond-based macaron, either free with a purchase or two for the price of one. Jour du Macaron (March 20) is a great opportunity to see what all the fuss is about. Hint: don't miss Pierre Hermé. A percentage of the proceeds go to charity.

From March 4–6 the Grande Halle of La Villette hosts the Mondial du Tatouage, where the world's greatest tattoo artists converge for this unique event, featuring exhibits, contests, concerts, DJ sets, food trucks, and around-the-clock tattooing. Watch the tattooist at work or take the opportunity to get inked by a top international artist. 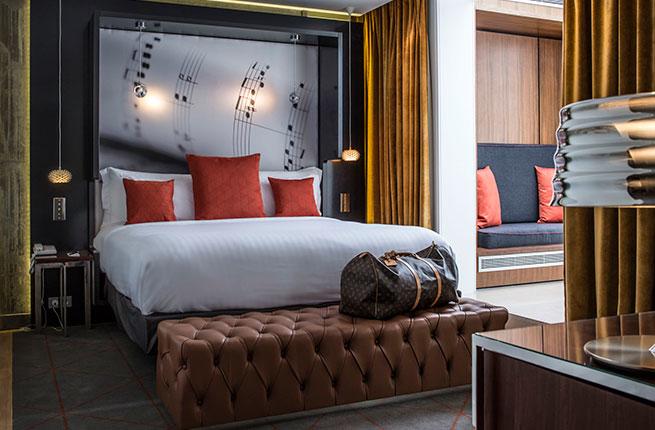 Named for a splendid seventh-floor terrace with panoramic views of Paris spread out before you, the new Terrass Hotel has just reopened after a sleek top-to-toe renovation. First opened in 1911, this architectural gem, inspired by the artists of Montmartre, stays true to its graceful bones, beautifully highlighted in shades of dove gray, brown and beige with splashes of brilliant color. Complete with a restaurant and bar (with spectacular views), a wellness center, fitness room and library, being away from it all has never been so relaxing or so chic. Double rooms, some with private balconies, from €165.

Just steps from the Champs-Élysées on Paris's famous Golden Triangle, this one-time home of the Marquis de Sers has been totally transformed, giving the historic Hôtel de Sers' spacious rooms, restaurant, and bar a luxe contemporary look and a total update of its naturally gracious spaces and elegant finishes. Common areas and all of the hotel's 45 glamorous rooms focus on natural materials—wood, stone, metal—and opulent fabrics. For utmost pampering, a full range of massages and beauty treatments are available in the privacy of your own room. Double rooms from €290. 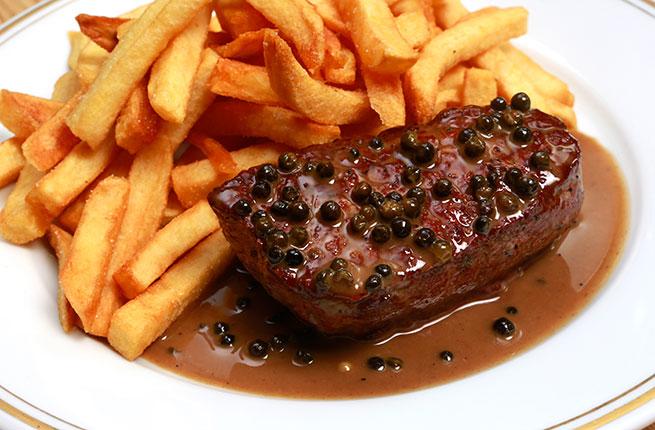 Daniel Rose, of the foodie-favorite Spring, once again dazzles in his newest endeavor, La Bourse et la Vie. Keeping the name only, Rose performed a Cinderella transformation on a classic Paris bistro, updating all the tropes in elegant versions—globe lighting, zinc bar, tile floor—and bringing his telltale flair to the beloved classic dishes. Succulent veal pot-au-feu, velvety house-made foie gras served on a bed of artichokes, and an unforgettable tête de veau with sauce ravigote are all worth the trip alone. A plate of the best gougères in Paris starts you off, and wise diners will not skimp on dessert: tarte tatin, mousse au chocolat, crème caramel. Come for breakfast (croissants, tartine, jambon persillé, coffee), lunch, or dinner and dine in haute bistro style.

After stints at in Copenhagen (Noma), London, and Tokyo, British chef Daniel Morgan showcases his love of meticulously sourced produce and the freshest seafood at Salt, serving dishes that are seemingly too delectable to be this healthy. Buckwheat spätzle of fermented cèpe mushrooms; steamed mussels with green dashi, cucumbers, and hot red pepper; roasted pumpkin with walnuts; and trout caviar and smoked trout are served with an excellent selection of natural wines or craft beer (like BapBap, brewed a few blocks away). The bright, streamlined space is a Paris hot spot, so be sure to reserve in advance.