From Picasso’s old haunts to funky street art, you’ll find plenty to inspire you in the City of Lights.

There’s no denying Paris is a city made for and by artists. Its architecture spans the centuries, with each major museum, cathedral, and garden showcasing a stunning sense of style and grandeur. Kings and emperors alike heralded the arts, laying the way for Paris to become a mecca for artists in the 20th century; everyone from Picasso to Van Gogh to Rodin found a way to be inspired here. Its vibrant energy continues, with dozens of newer art centers and installations highlighting the work of modern artists, and reaching out to inspire the next generation. Whether you’re an artist yourself or just an admirer, Paris beckons with the creativity of its residents, both past and present. 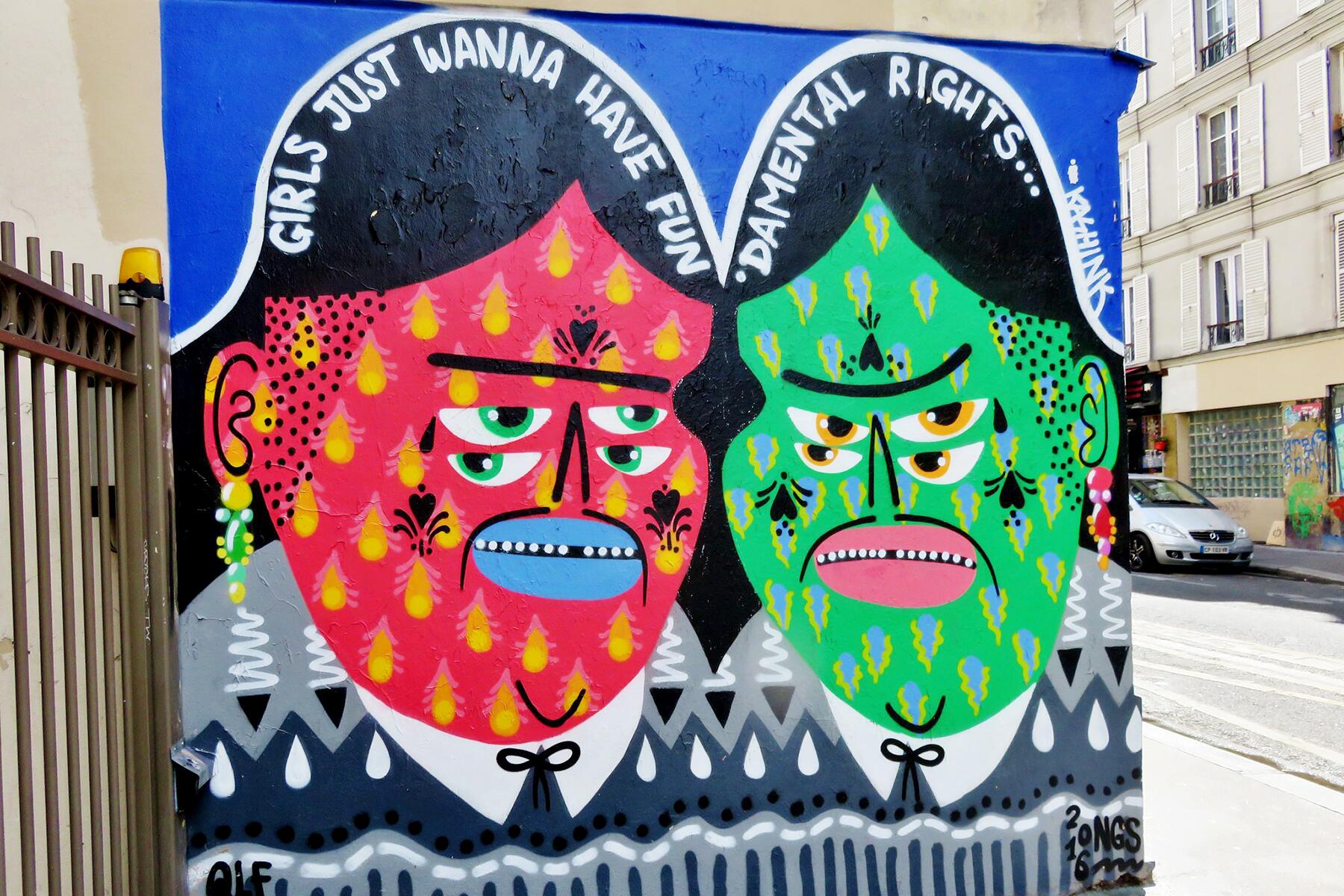 The 2½-km (1½-mile) stretch along Rue Saint-Maur in the 10th and 11th arrondissements offers an insider’s view of Parisian street art. The street is lined by a variety of street art, from the city’s most popular female artist Kashink to portraits by Shepard Fairey, the graphic designer behind former President Obama’s now-iconic “Hope” campaign posters. 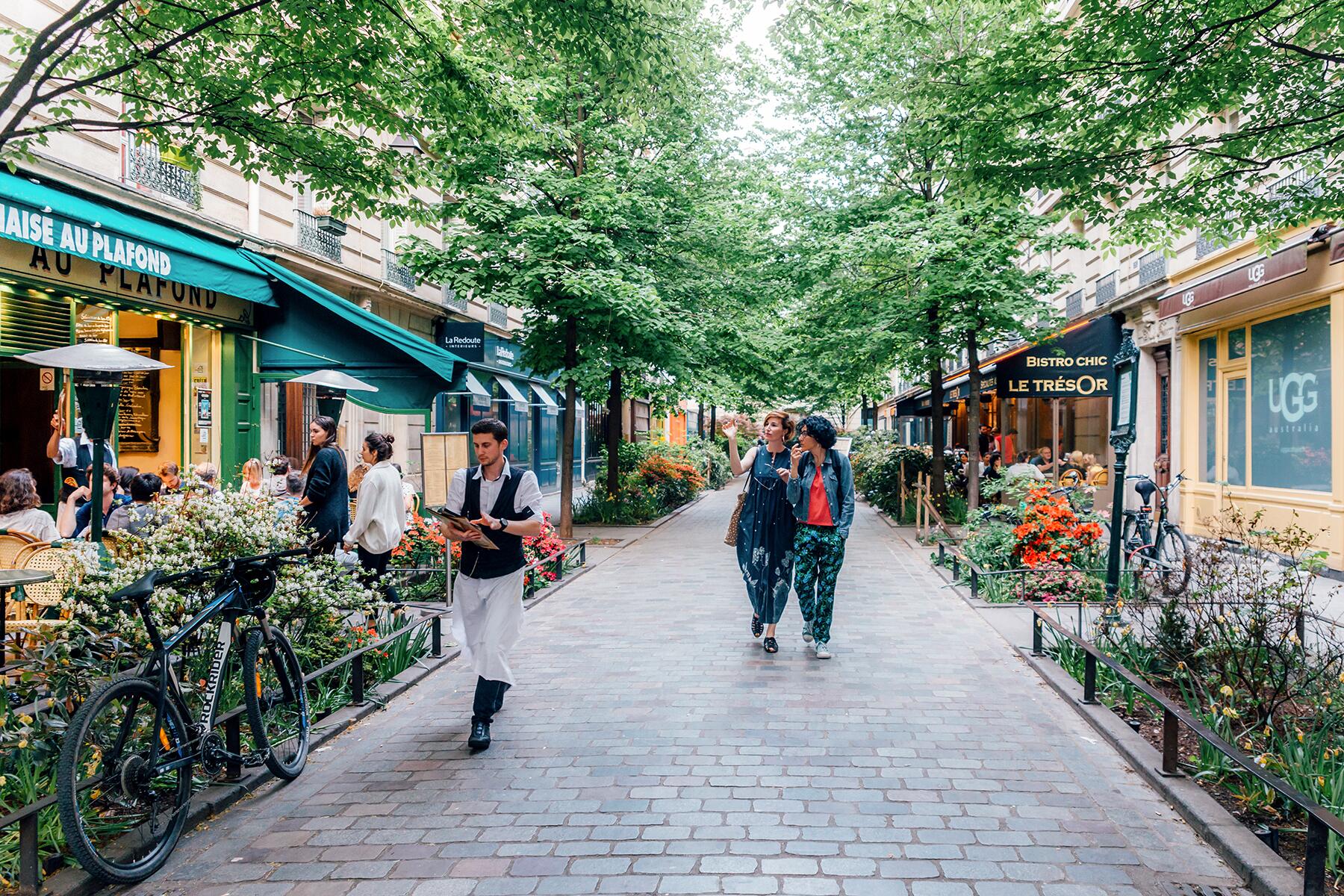 In the 3rd arrondissement, the tiny streets that run from the Picasso Museum to the Place de la République make up the golden triangle of Paris’s coolest designer district, Haut Marais. The transformation actually began all the way back in the mid-13th century, when Charles I, brother of Louis IX, built his residence at what is now 7 rue de Sévigné. French nobles soon swept in erecting limestone mansions, which were eventually converted into museums as that same nobility was swept out (Hôtel Salé became the Musée Picasso and Hôtel Carnavalet became Musée Carnavalet). Despite the pretense of these two museums, the area was for a long time an unexceptional working-class neighborhood. But in 2009, everything changed when Marie-France Cohen converted an old wallpaper factory into her fashion and decor shop, Merci. Since then the NoMa, as Haut Marais is called, has exploded with sophisticated bistros, Made in Paris designer shops, and contemporary art galleries. Thaddaeus Ropac, a pal of Warhol and Basquiat, opened his open space gallery on Rue Debelleyme in 1990, and today represents 60 artists there. La Galerie de l’Instant is all about photography, and is known for its cool temporary exhibitions. Be sure to stop by the vintage deco shop, Les Fées Mélanc(h)olia. It’s not a gallery, but the objects are worth a look. 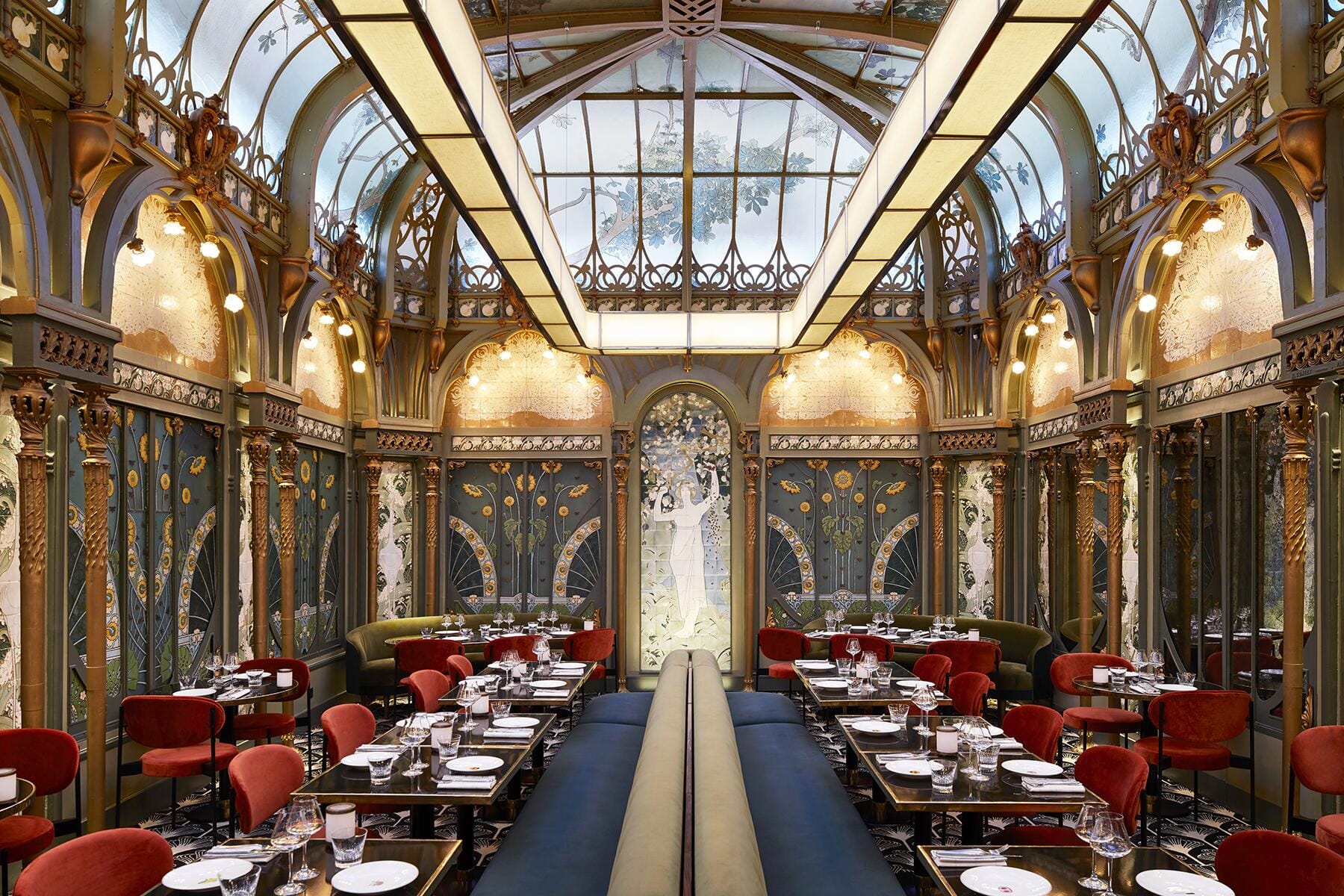 Located on Rue Marbeuf, steps from the Champs-Elysées, Beefbar may have just opened in October 2018, but already star chef Alain Ducasse is a regular and it’s been named one of the most beautiful Parisian restaurants by Vogue. Owner Riccardo Giraudi was the first in Europe to import hormone-free American Black Angus beef in 2005—the same year he opened Beefbar Monaco. Now his anti–steak house has nine locations (the Hong Kong one received a Michelin star in 2017). But what distinguishes Beefbar is its architectural scope, as designed by Humbert & Poyet. The restaurant’s Art Nouveau atrium was designed in 1898 by architect Emil Hurtré and painted by Jules Wielhorski. This artwork was enclosed and hidden from the Nazis during WWII, only to be rediscovered in 1983, when it was listed as a Historical Monument. Beefbar Paris’s Art Deco elements—marble, faceted mirrors, brass fittings—blend flawlessly with industrial black and minimal exterior woodworks. And with Bugatti cutlery, Bernardaud plates, and Baccarat glasses on the table, you might be paying more attention to your surroundings than your meal. 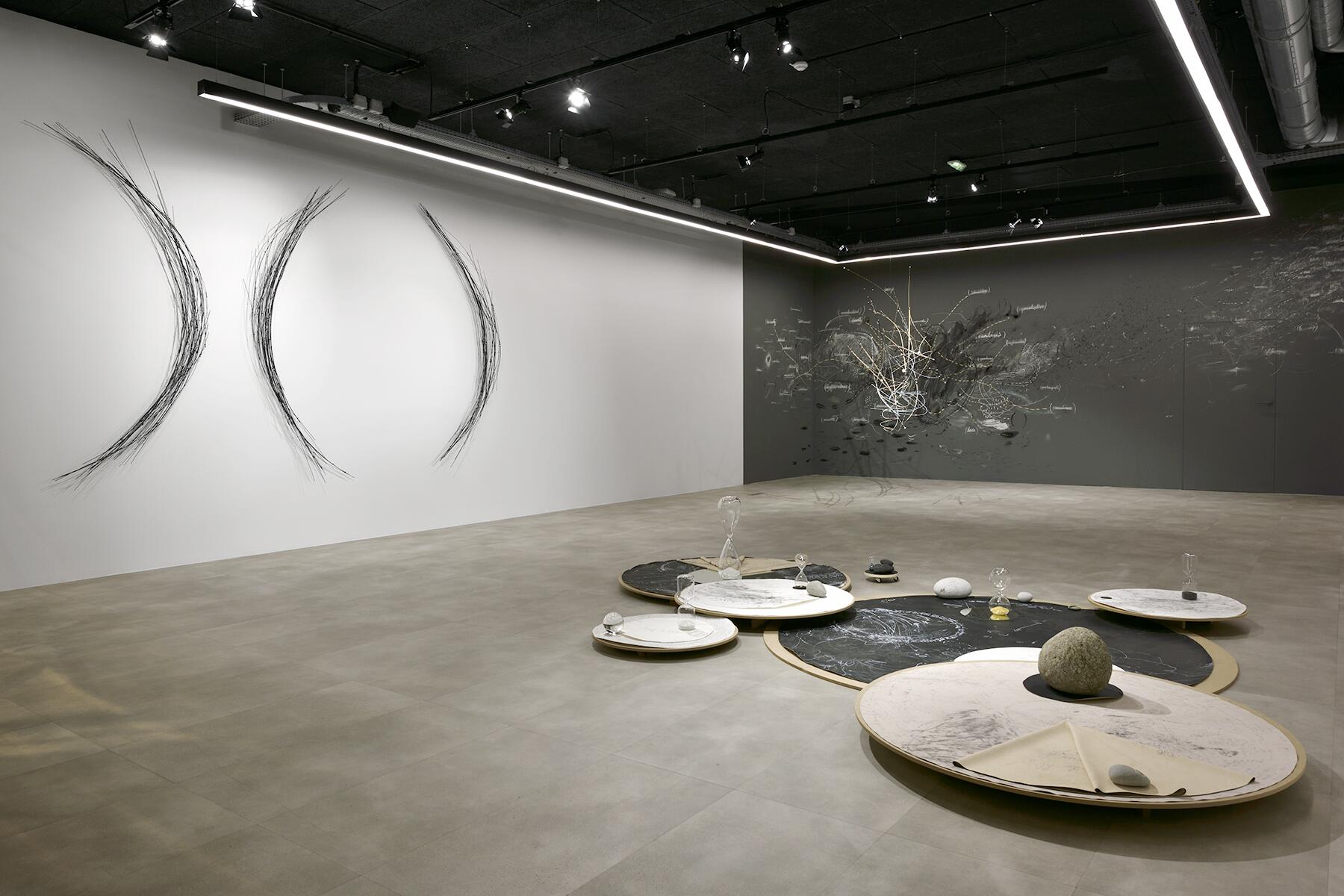 Located near the Opera Garnier, the one-of-a-kind Drawing Hotel is the brainchild of Carine Tissot, formerly of Reed Exhibition, who also runs the contemporary art fair, Drawing Now Paris. Six local artists were brought in to decorate the halls of the boutique hotel’s five floors; a contemporary art gallery, the Drawing Lab on the lower level, will hosts three exhibitions at a time. But what’s particularly cool is the hotel’s art concierge, Ambre Cartier. She can provide culturally-curious guests with the inside scoop on art exhibitions and cultural events at lesser-known galleries throughout the city. 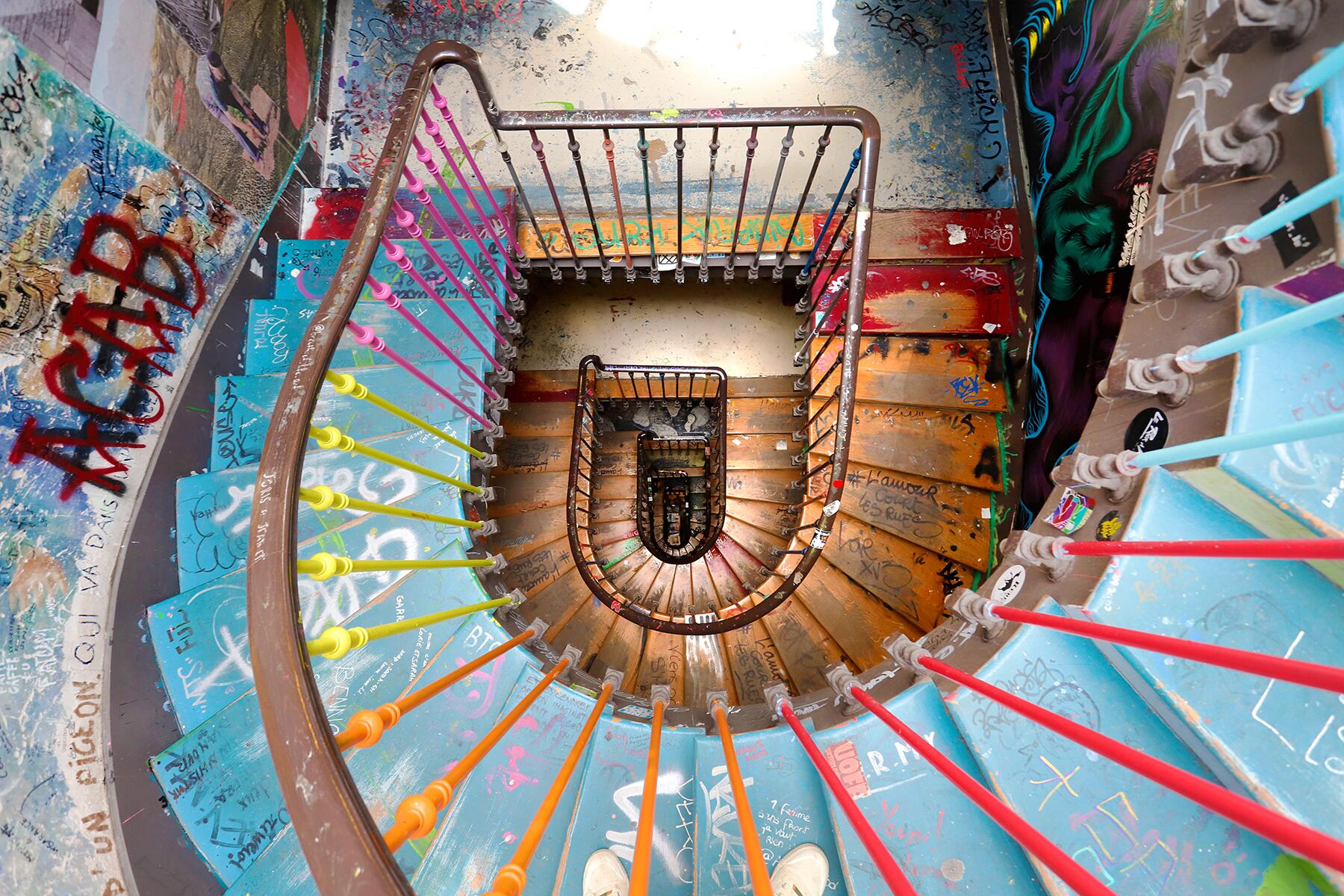 For years, artists were illegally squatting in an abandoned bank building located at 59 rue de Rivoli, but their work attracted 40,000 visitors in 2001 alone, which made the space the third most visited center for contemporary art in Paris. The city bought the building in 2006 and after renovations to address safety and legal concerns, it reopened three years later, renting 30 studios to artists who pay minimal rent. The five floors of 59 Rivoli and its exhibits are open to the public for free, but a donation to enter is expected. You can also buy the art, with prices ranging from €10 to €200. 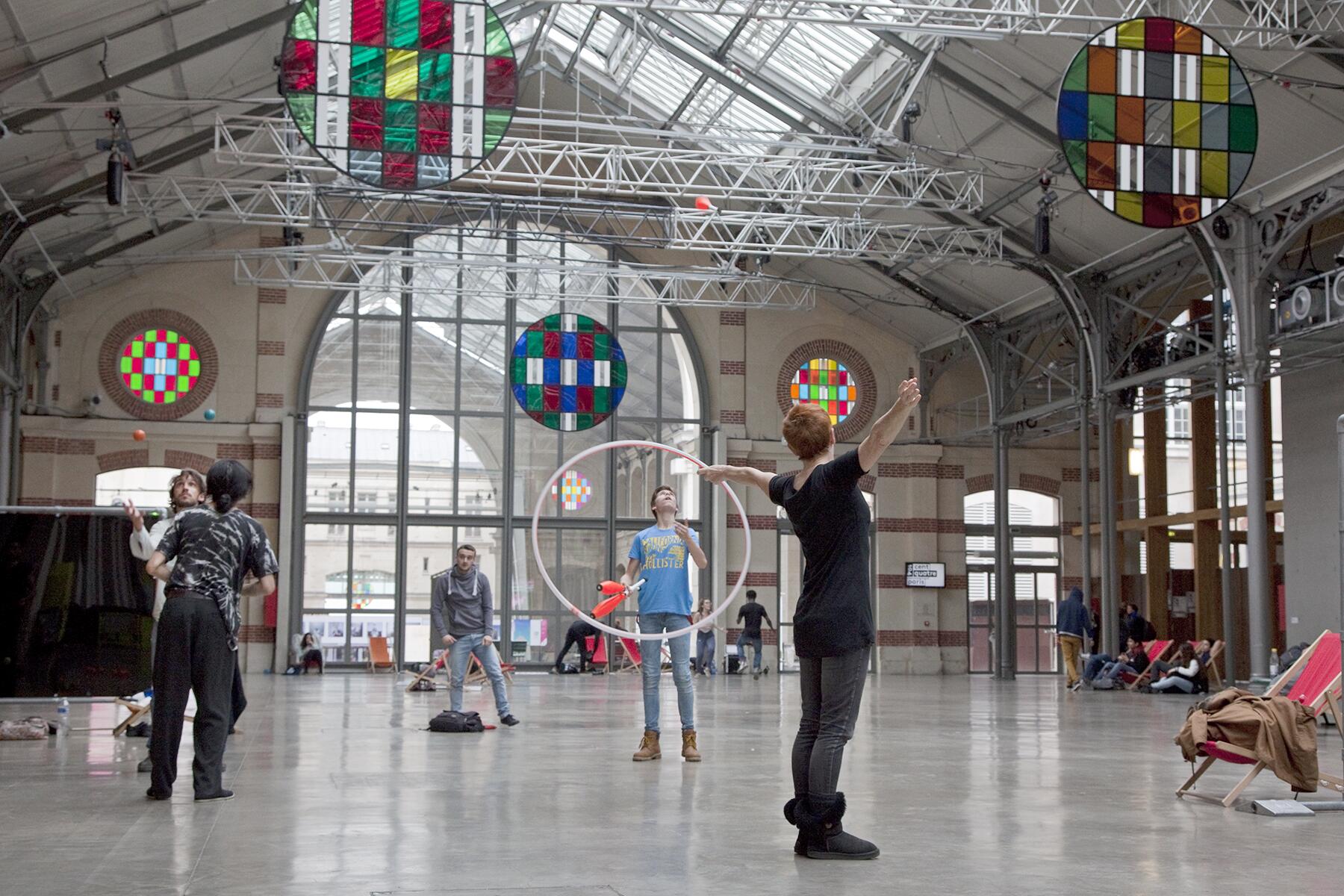 Cent Quatre is a cultural arts center in the 19th arrondissement that was converted from a former municipal morgue around 1905. The monumentally open steel and glass space covers 420,000 square feet, more than enough for its countless art installations, art fairs, events, concerts, and theater performances, as well as Bal Pop, a free dance party open to all ages one Saturday a month from 7:30 pm to 10:30 pm. In 2019, the Grand Central Brasserie, one of three restaurants on-site, was awarded a medal from the Mayor of Paris as part of the city’s bid to have the bistros and terraces of Paris designated UNESCO Intangible Heritage Inscription of the Tradition and Art of Living.

The Big Four of Museums

No art lover should miss the usual suspects for art in Paris—the Louvre, Musée d’Orsay, Centre Pompidou, and Musée de l’Orangerie—but you should recognize that they come at one cost: crowds. Don’t skip the Louvre entirely, of course, but as the world’s most visited museum with 10.2 million people in 2018 alone, plan your visit ahead of time so you see what you really want to see—if you spent one minute looking at each object in the Louvre, for eight hours a day, it would take you 75 days in total. Instead of permanent collections, look for temporary exhibits and book tickets online in advance. If Claude Monet’s Nymphéas (Water Lilies) at Musée de L’Orangerie is on your list, then start with that and then feed the pigeons in the gardens. The best day to visit the major museums is the first day of sunshine after a period of rain. 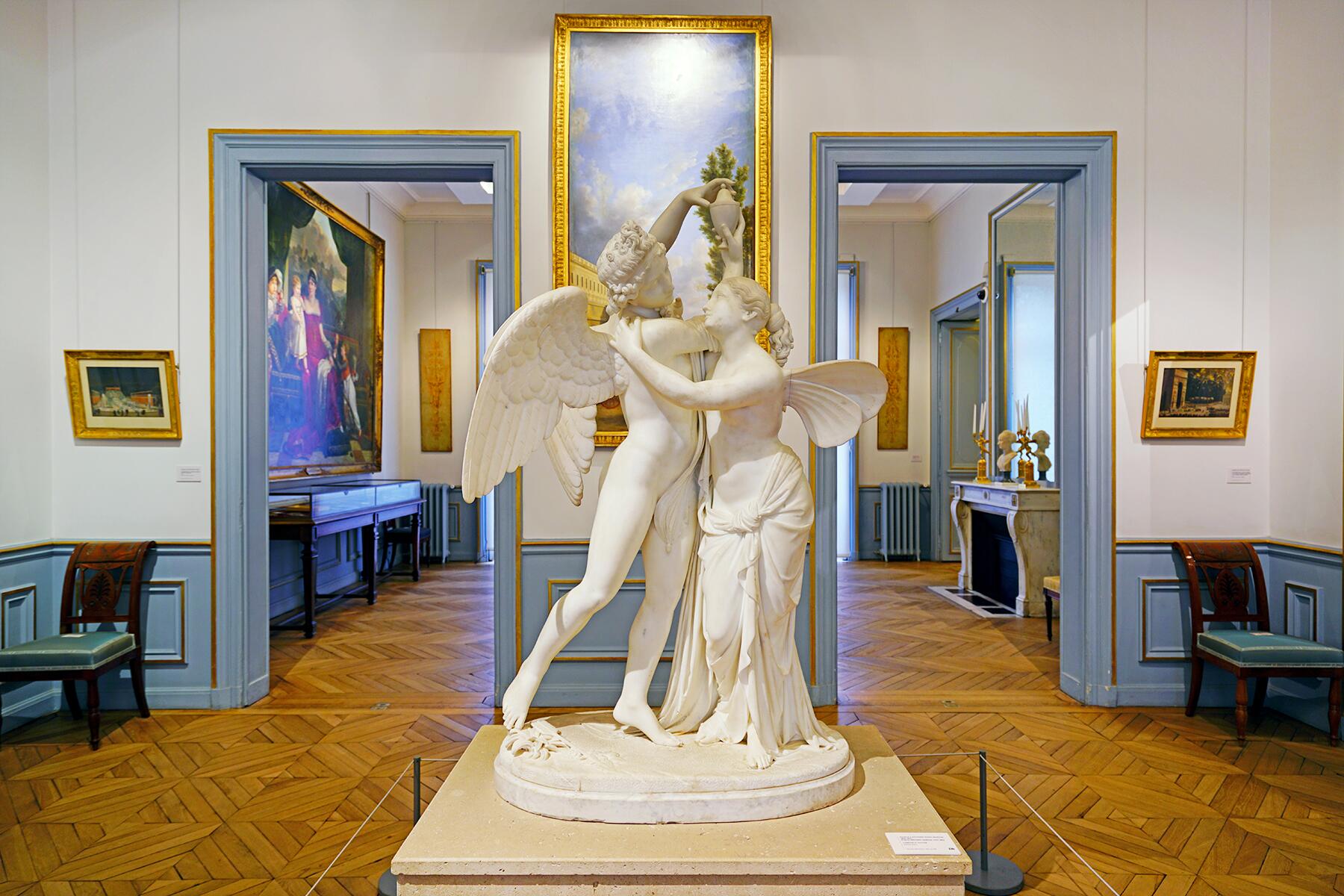 Paris has a large selection of museums dedicated to particular artists—Musée Picasso, Musée Rodin, Dali Paris, Musée Gustave Moreau, and Musée Marmottan Monet—and in many cases, the mansions they’re housed in are as intriguing as the art collections themselves. Start by mapping out museums in the same arrondissements and decide which particular art you want to see. Let’s be honest, few art lovers can appreciate all 5,000 works of Picasso at his museum in Marais. 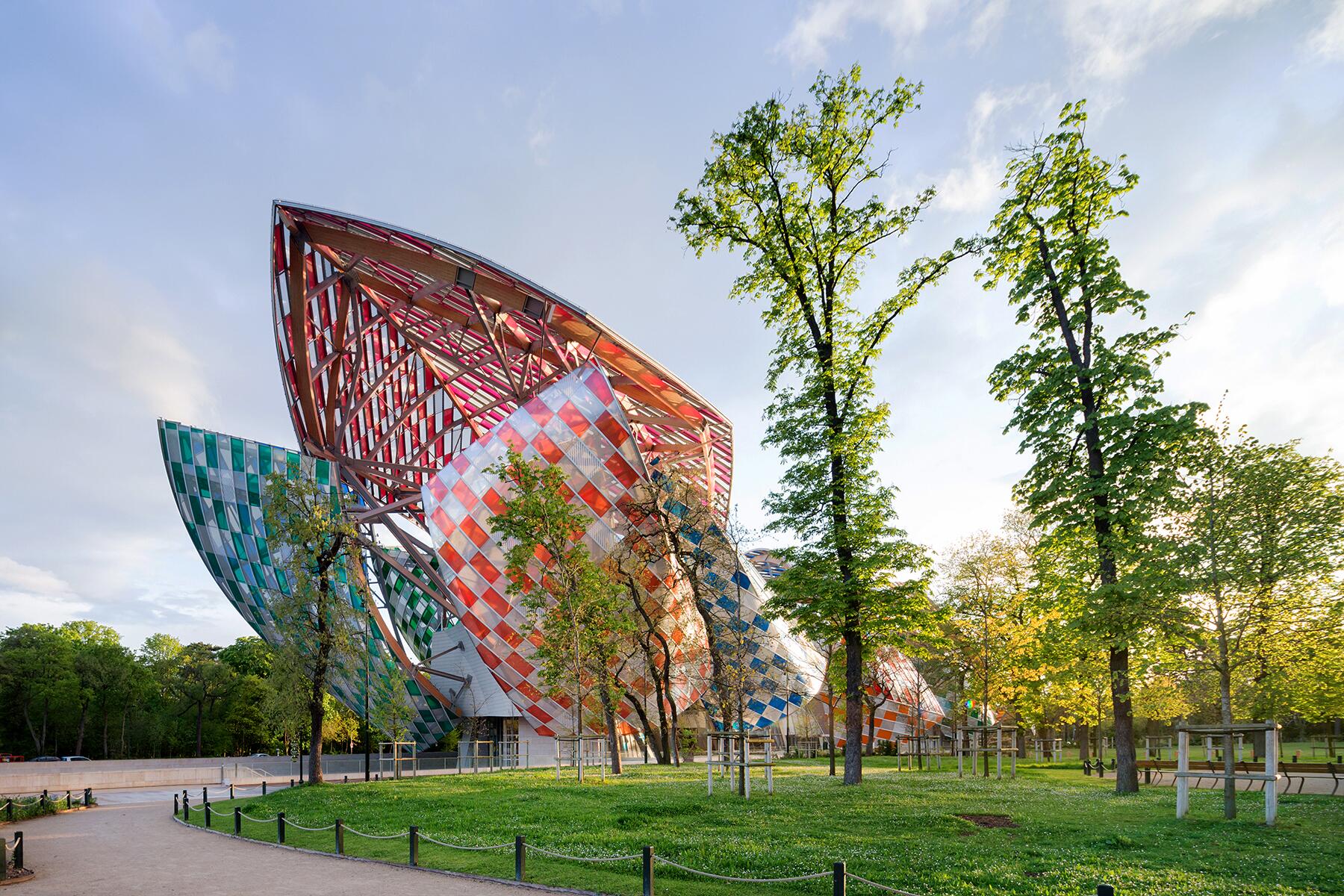 There’s a spectacular offering of underappreciated museums in Paris that should be on your art list. The Fondation Louis Vuitton in the 16th arrondissement is a private museum designed by American architect Frank Gehry, with an art collection donated by billionaire art collector Bernard Arnault. The Art Nouveau Petit Palais has a permanent collection of 1,300 works from antiquity through the early 20th century, counting masterpieces by Courbet, Cézanne, Monet, and Delacroix—and it’s completely free to visit. Other smaller art museums like Musée Jacquemart-André, Musée de Montmartre, Musée des Arts et Métiers, and Musée Nissim de Camondo also merit consideration. 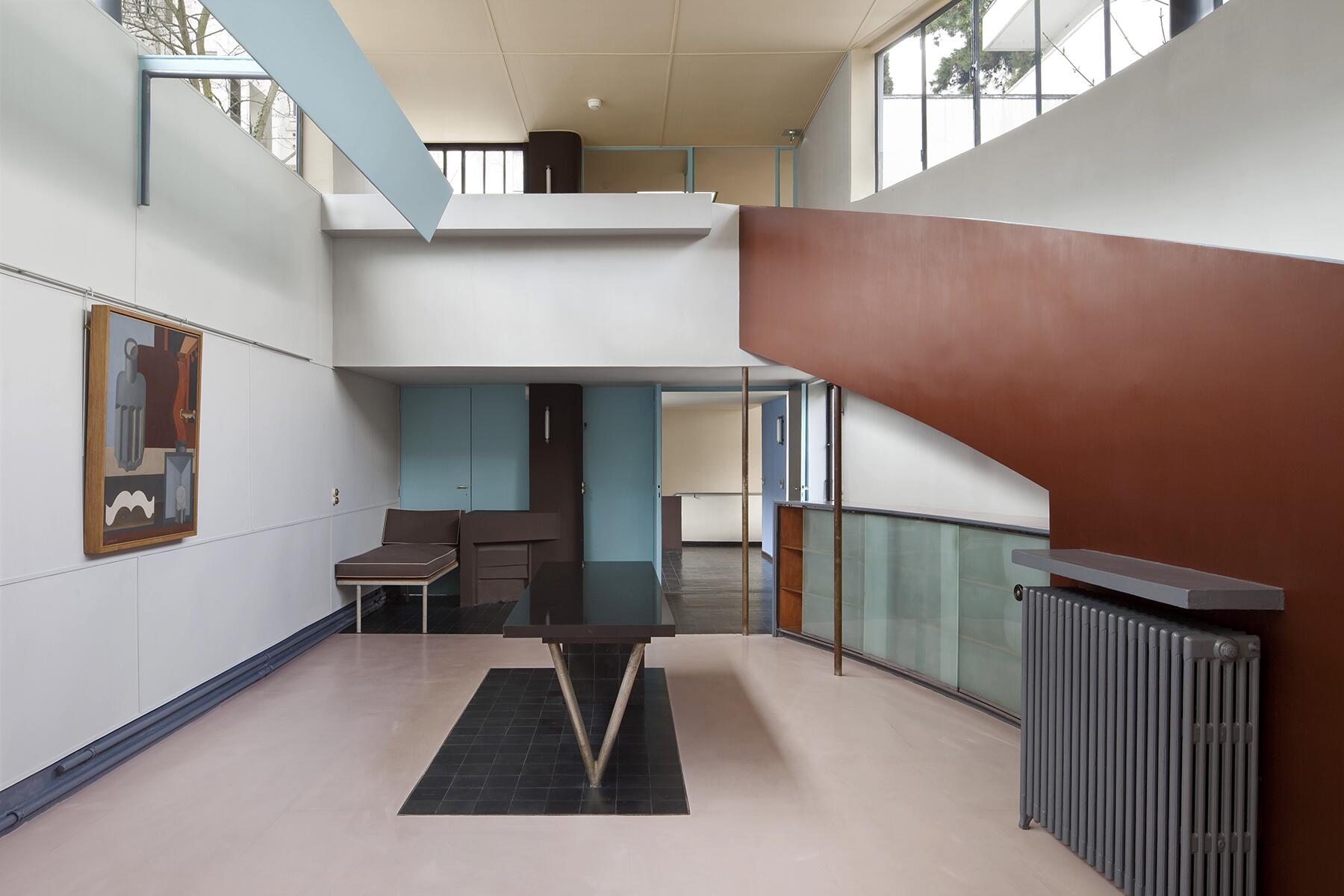 PHOTO: Courtesy of Olivier Marin-Gambier
10 OF 13

Born Charles-Édouard Jeanneret, Le Corbusier was a pioneer of both modern architecture and urban planning. The studio/apartment where the Swiss-French designer lived with his wife for more than three decades makes for a fascinating visit for art lovers. The modern building “Immeuble Molitor,” was designed by Le Corbusier himself in the 1930s and today is a UNESCO World Heritage site. Spread over two floors, his living space respects Le Corbusier’s 1927 modernist manifesto Five Points of Architecture. The Fondation also manages Villa La Roche du Corbusier, a three-story Cubist house that’s one of the most important examples of early use avant-garde architecture. 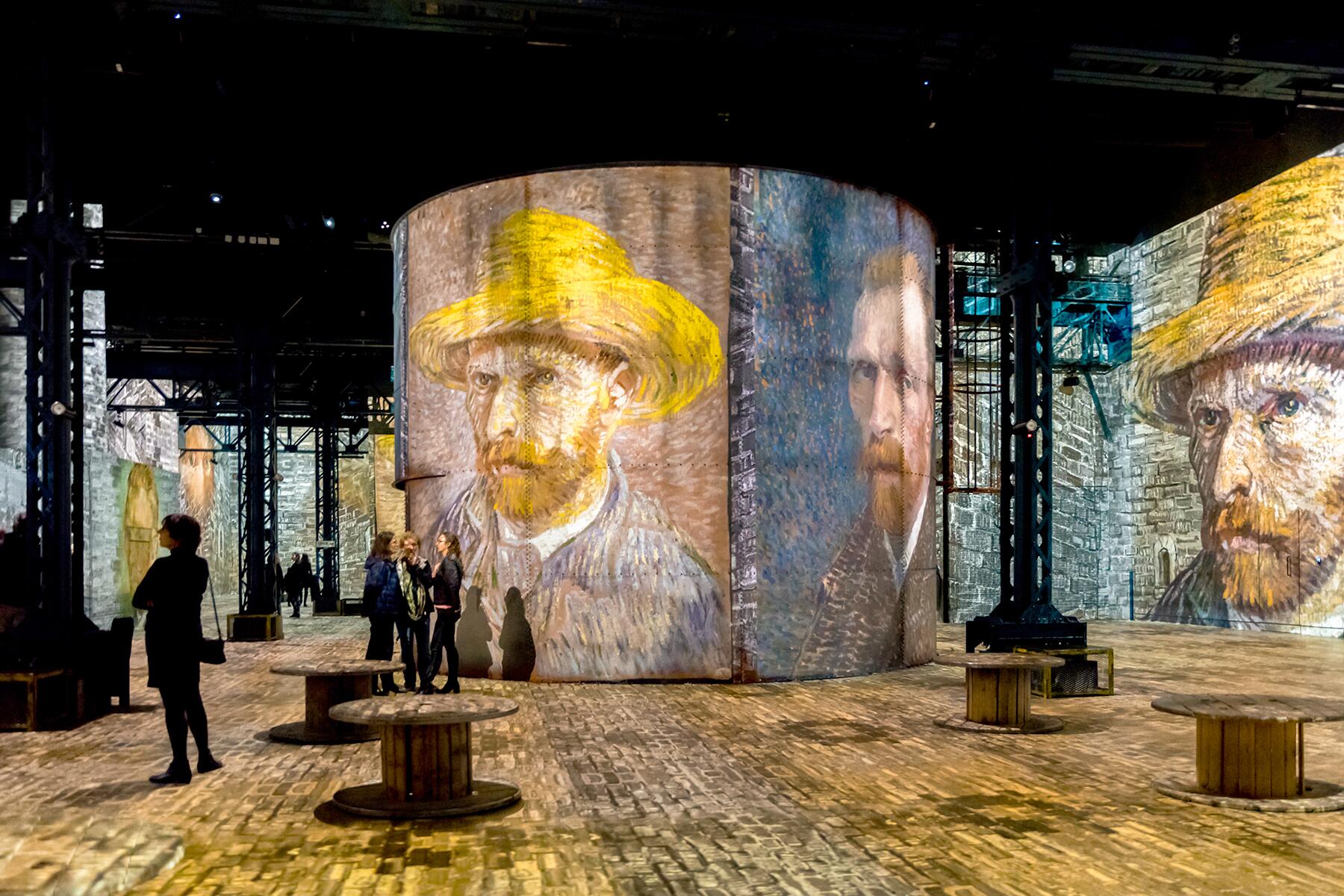 PHOTO: E. Spiller via Culturespaces
11 OF 13 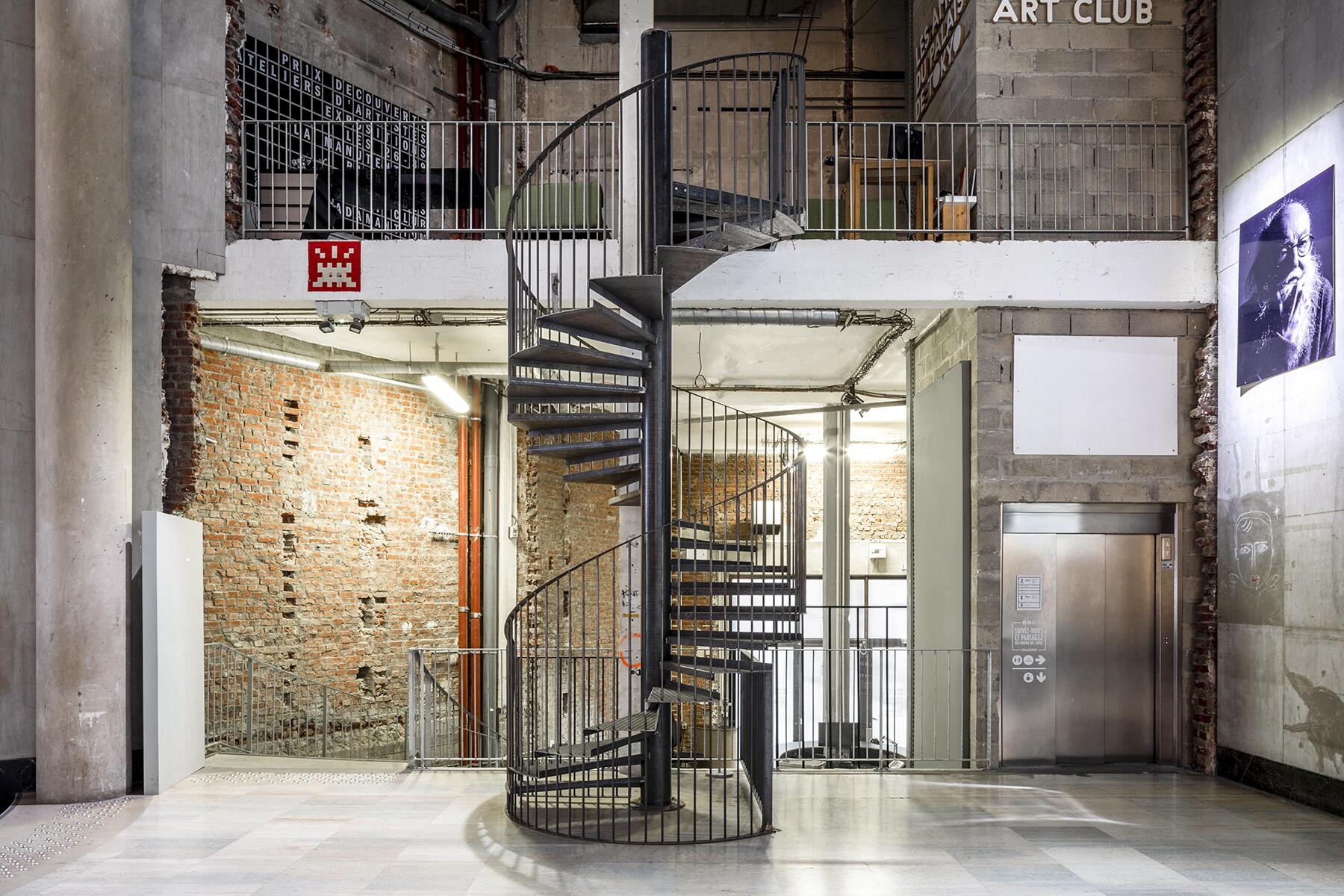 Steps from the Eiffel Tower, the Palais de Tokyo became the largest center of contemporary art in Europe after a renovation in 2012, but the building has been around for many years. The original Palais de Tokyo was built for the 1937 International Exposition of Art and Technology in Modern Life and named after the Quai de Tokio (known today as Avenue de New York) where it was located. It was designed to house two separate municipal museums: in the east wing, the Musée d’Art Moderne de la Ville de Paris (MAM) houses works by Picasso, Henri Matisse, Alberto Giacometti, and Yves Klein (the permanent collection is free to visit). In the west wing, the present-day Palais de Tokyo hosts contemporary art over four floors. After you get your art fill, take in views of the Eiffel Tower while sipping natural wines on the terrace of the restaurant Les Grands Verres. 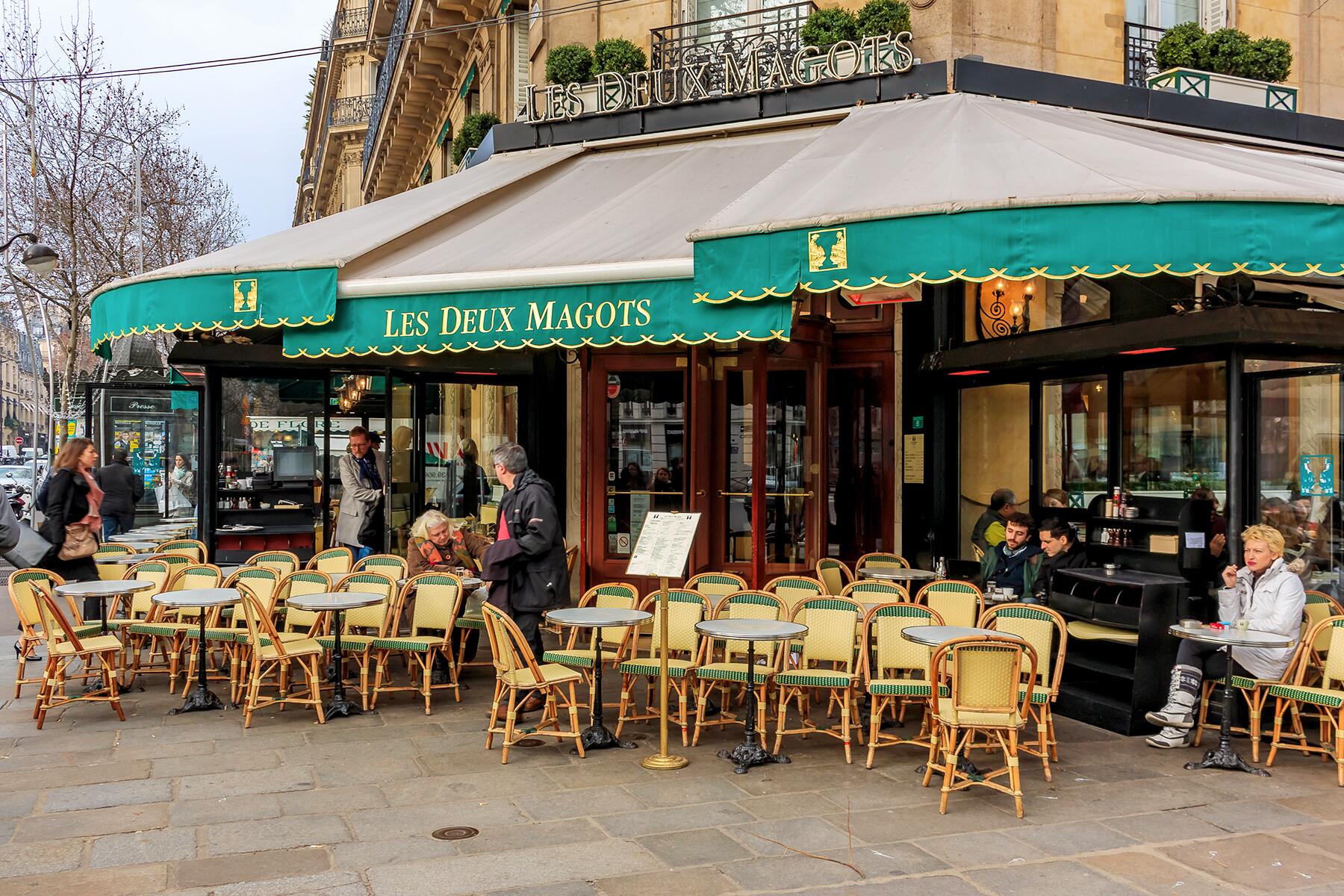 For nearly a century, aspiring writers, struggling artists, and curious tourists have visited Les Deux Magots and Cafe de Flore, both of which were made famous by the Lost Generation who made Paris their stomping grounds. The Art Deco Deux Magots is where Hemingway wrote the 1927 novel The Sun Also Rises, using the café as a setting; the Surrealists movement was born here. Oscar Wilde and James Joyce were also regulars. Less than 100 feet away, Jean-Paul Sartre, Simone de Beauvoir, Albert Camus, and Pablo Picasso all frequented Café de Flore. At the very least, stop by for a café. This is your chance for life imitating art.