A Journey on the Paris Metro with Author Lorant Deutsch

By Lorànt Deutsch, author of Metronome: A History of Paris from the Underground Up 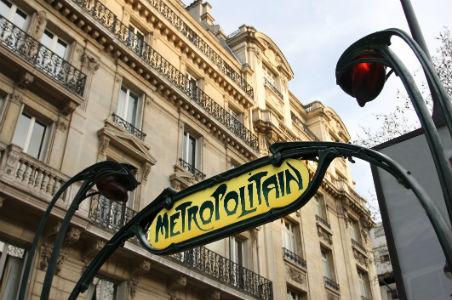 At the age of 15 I went to live in Paris, and took with me my love of its history. I knew almost no one; the names of the streets were my first companions. Most of all, it was through the subway system, the Métro as it known, that I discovered Paris. The Métro was a country boy’s ticket to ride, and I took full advantage of it, crossing and re-crossing the city. The Paris Métro map represents the city’s central nervous system; you can use it to trace its beginnings, when it was little more than a small island in the Seine. Each stop evokes some part of the past—not simply of Parisian history but of French history as a whole. From stops La Cité to La Défense—oldest to newest—the Métro serves as a moving timeline, each station punctuating one of the city’s 21 centuries of history.

Île de la Cité would be the right place to start: this island is the birthplace of Paris, has the shape of a cradle, and sits at the very heart of the city. “The head, the heart, the very marrow of Paris,” as Gui de Bazoches wrote in the 12th Century.

The Île de la Cité stop consists of a series of wells dug deep into the city’s entrails—some twenty meters below the water level of the Seine, and, as in Jules Verne’s Voyage to the Center of the Earth, when you enter it you have the feeling that time is going in reverse. No need for a Nautilus to dive leagues below the surface—the Cité stop will do.

The Saint-Martin Métro stop is actually no longer a stop; it was closed in 1939. Run today by the Salvation Army, its platforms are now intended not for passengers but for the poor. When the city goes through a cold snap, the homeless (who are called the “SDF,” or Sans Domicile Fixe) can go and find refuge and a little warmth, putting themselves into the care of Saint-Martin, the apostle of the Gauls, a man who devoted his life to the poor.

During the winter of 338-339, as a young Roman Army soldier stationed in Amiens, Martin passed a beggar on his knees who asked for alms. Martin had already given away all that he had, so he drew his sword, cut his cape in the middle, and handed half of it to the man. The next night, Christ appeared to Martin. He was carrying the part of the cape that Martin had given to the beggar and said to him, “Martin the neophyte gave to me this cloth.”

It is simply coincidence that the name of the Métro station dedicated to caring for poor bears Martin’s name—it was chosen for location and logistics, not as a symbol—but the coincidence is nonetheless haunting.

It is here that the subway train comes above ground, as if coming up for air. At the end of the platform you can see the white dome of the Sacré Coeur on Montmartre. But the line and the station were built on far older remains: the fields and pastures that, amazingly, would survive until the end of the 18th century.

Between Montmartre and Belleville, the village of La Chapelle grew up around the oratory, the chapel in which Saint Geneviève prayed. After Saint Geneviève, another celebrated penitent once came to this place: Joan of Arc. A statue recalls that la Pucelle came here to pray on September 7, 1429, hoping to free Paris from the English and their allies, the Burgundians. On this occasion, she wasn’t successful; she was wounded in the thigh during combat.

The double appellation of this Métro stop is misleading, for the Palais-Royal doesn’t designate the Louvre but rather the home Cardinal Richelieu built in order to be near Louis XII, who lived in the Louvre. After the death of the cardinal and the king, Anne of Austria became regent, and wanted to mark her authority and taste by moving into the opulent new palace, which was more accommodating than the old Louvre. In fact, she had never been able to abide that austere, old fort, with its freezing rooms and dark corridors. It had been pointed out to her that nonetheless the old palace had many qualities and distinct advantages; for example, one could survive a siege there and protect royal prerogative from the power of the masses and invasions of foreign armies. However, the queen was not a military strategist and didn’t understand such logic, so in 1644, with her two sons, the future Louis the XIV and Philippe d’Orléans, she settled into Richelieu’s old home, henceforth called Palais-Royal.

The name of Place du Château d’Eau was changed to Place de la République in 1879, the year in which the republicans triumphed once and for all over the royalists and the Bonapartists in municipal and senatorial elections. It became the home of an imposing-looking statue that still presides over it, placed there on July 14th, 1884.

When you come out of the Métro at République you find yourself standing at the foot of the weighty figure of Madame la République. In her revolutionary headgear (the so-called Phrygian hat), holding an olive branch, the Declaration of the Rights of Man at her side, her bronze gaze watches over popular protests for which she has been the guiding spirit for more than a century. Covered in black-and-white flags atop which are inspiring banners, she remains the mother figure for the Enfants de la Patrie. At her feet, on the stone pedestal, are the Three Virtues, symbols of the Republic: Liberté (Liberty), symbolized by a flame; Egalité (Equality), as symbolized by the Tricoleur flag; and Fraternité (Brotherhood), as represented by a cornucopia. This secular form of the divine became the apotheosis of the then-new Third Republic. Soon the République would shape the nature of all Paris’ future institutions.

A comedian and bestselling author in France, Lorànt Deutsch has always had a passion for history and his native Paris.