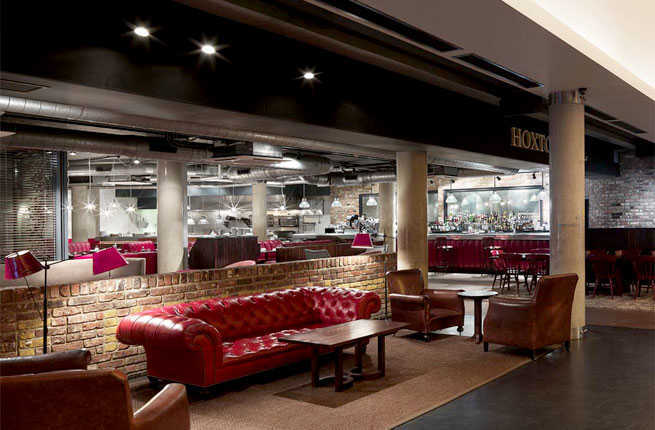 Booking a trip to Paris or Barcelona is akin to a daydream—with visions of sidewalk cafes and wine-soaked dinners coming into clear view. And then those fantasies come to a screeching halt when you see the hotel rates. Meet the cheap-and-chic boutique hotel. Every city has them; you just have to know where to look. Lucky for you, we know where to look.

So we put together this list of well-appointed boutique hotels (around 100 rooms) that are all under $250/night. (Actually the highest rate on here is $215/night). The best part? You don’t have to sacrifice style or service at any of these top picks.

(Disclaimer: we can’t guarantee that these will be the exact rates you get on booking.)

The Hoxton"> has a rock-n-roll vibe that’s only enhanced by its surrounding neighborhood, which is dotted with galleries, shops, and cafes. And one of the area’s best eateries just happens to be inside the hotel, the Hoxton">. Rooms from $150/night. 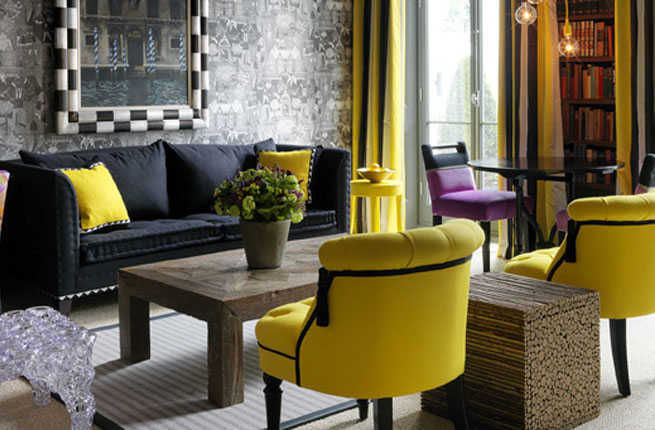 You cannot get more centrally located in London than the Number">. It’s literally a stone’s throw from Harrod’s and the Victoria and Albert Museum in Kensington, but you’d never know it. The address on the front door is the only way you’d know you’d found it. Step into the outdoor courtyard for afternoon tea on a sunny day. Rooms from $215/night. 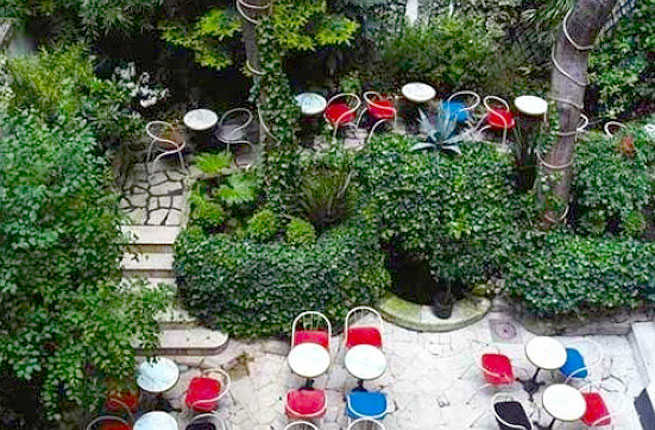 Stray from the beaten path and you’ll discover Hotel">, a cool and eccentric stay with a courtyard café as frequented by locals as guests and sleek, modern rooms. This hotel favors those who have been to Paris before, in that it’s in the still-up-and-coming neighborhood of Pigalle, a nice walk from Montmartre. (Which is to say, not walking distance from the main tourist sites). Rooms from $150/night. 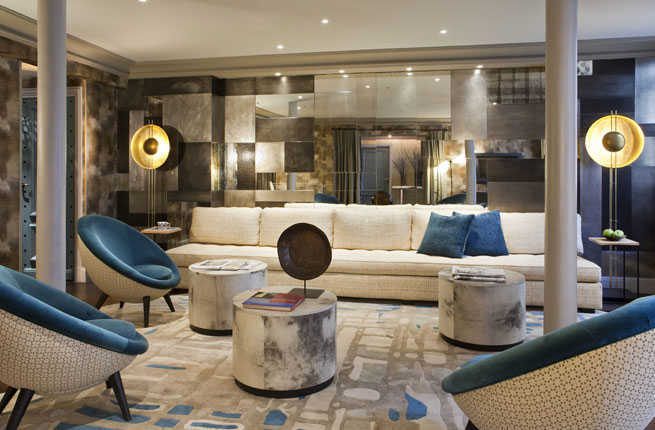 Alternately, Hotel"> sits smack in the center of it all, in Paris’ first arrondissement. It feels like your chicest friend’s Paris pied-a-terre and it just underwent renovations. Think neutral tones throughout, a stunning new breakfast room and library, and free Wifi. Rooms from $160/night. 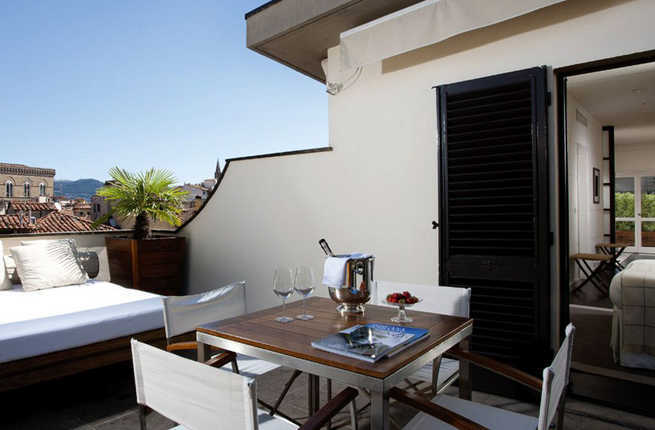 Despite its near-perfect location on a side street near Piazza della Signoria, the Gallery"> feels like a well kept secret. Inside the modern façade, you’ll find sleek décor and high end design, art lining the walls, and gorgeous Italians drinking some of the city’s best cocktails in the ground floor bar. Rooms from $205/night. 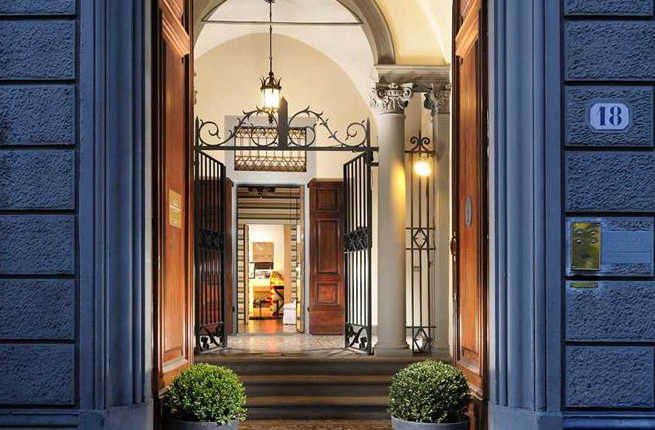 A guesthouse (er, mansion) near Santa Maria Novella, Casa"> feels like your own Florentine apartment. Well-appointed with beautiful furnishings (each room has its own theme), the hotel is presided over by very few—you’ll get a key from the housekeeper. Inside, you’ll find Turkish baths, open terraces, and daily in-room breakfasts. Rooms from $90/night. 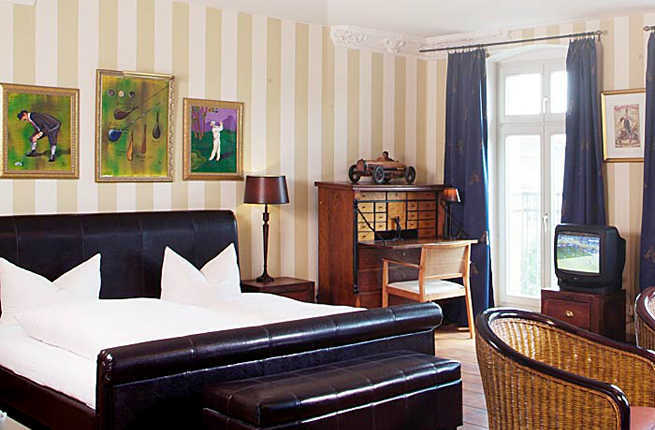 A calm launching pad between the in-demand neighborhoods of Mitte and Kollwitzplatz, Berlin’s Ackselhaus feels like your own chic Berlin flat with comfy rooms and inviting outdoor spaces. Rooms all have different themes, from Picasso to China, which influence everything from wall color to book selection. Rooms from $155/night. 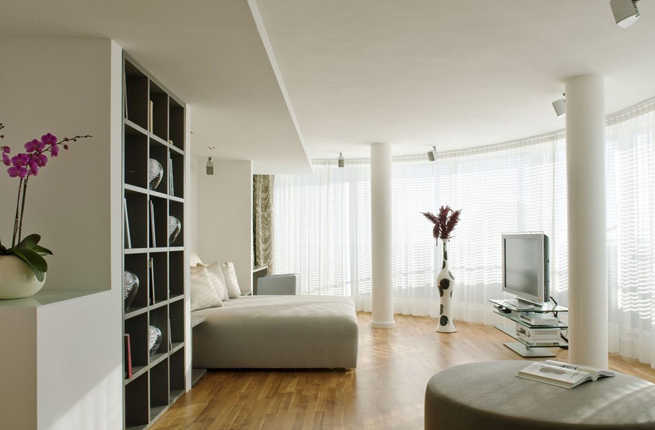 Photo courtesy of The Mandala Hotel

Right on the buzzing Potsdamer Platz, The"> has an open, airy design and an in-the-know vibe. While it might look small, it actually has 156 spacious rooms, a plush spa with only the best products like Dermalogica, and… (wait for it), a Michelin-starred restaurant. Rooms from $190/night. 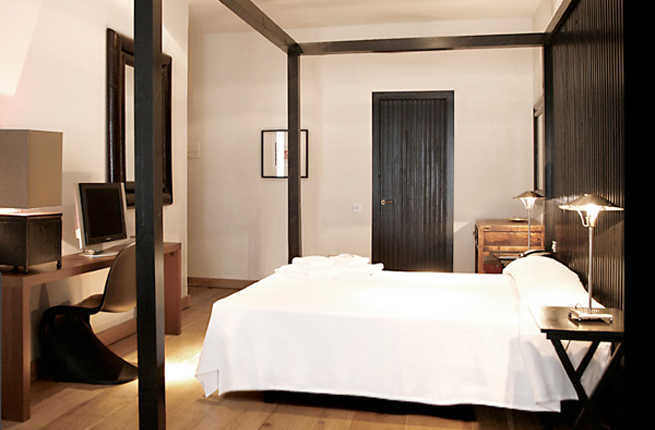 Food-lovers headed to Barcelona will appreciate Hotel">, a stone’s throw from the Sant Antoni market (where it gets its name) and home to one of the city’s mainstay restaurants. Smack in the up-and-coming neighborhood of Eixample, the hotel is modern with black, white, and red accents all over. Rooms from $85/night. 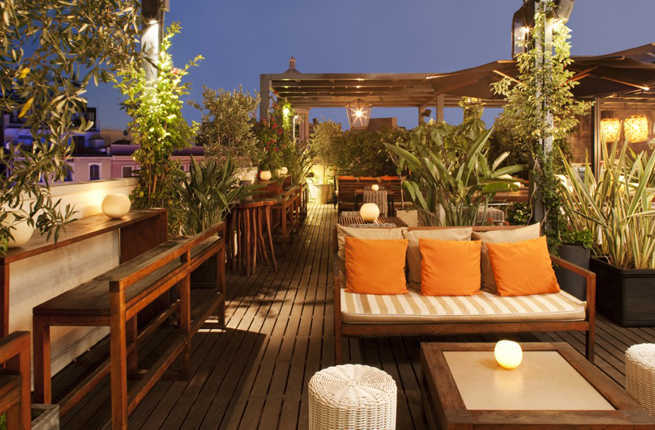 Chic and well located, the Hotel"> looks like it hails from the pages of Elle Décor. Rich, dark leathers, black and white photography, and oversized headboards are stuffed into this gorgeous 1920s building. Pair that with a fantastic Mediterranean restaurant, rooftop terrace, and cocktail bar. Rooms from $140/night. 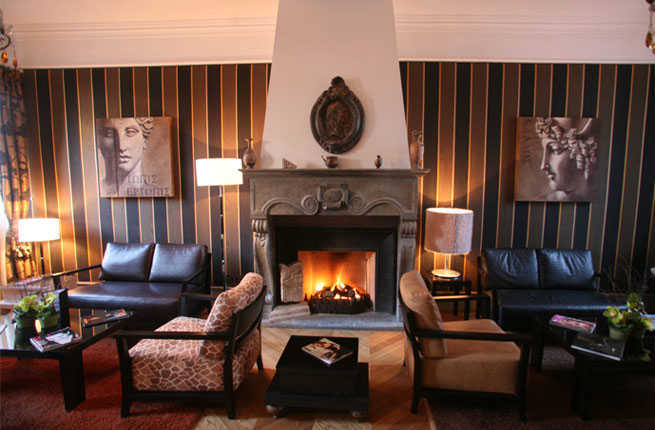 Photo courtesy of Inn at the Roman Forum

Rome: Inn at the Roman Forum

The Inn"> is a place you’d never know to look for. Mere steps from some of Rome’s most famous ruins, it is a hidden yet plush 17th century Italian villa with 12 rooms and a thousand year old crypt (yep, crypt). Some rooms have private terraces, all have flat screen TVs, and breakfast is served on the roof. Rooms from $200/night. 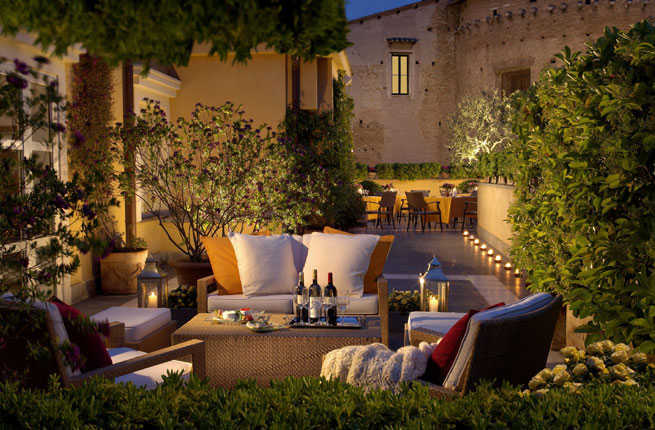 Returning to Capo"> after a day of sightseeing in Rome, you’ll feel instantly relaxed—think modern rooms in subtle tones and a rooftop lounge for evening aperitivos. Add to that it’s incredible proximity to the Colosseum, and you’ve found your launching pad. Rooms from $175/night. 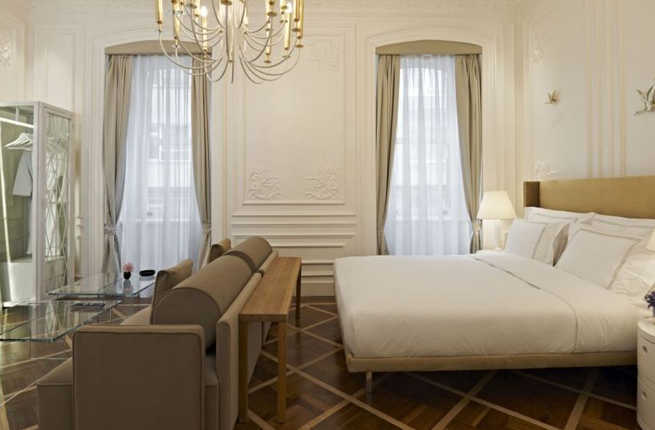 Find the Prada store on Abdi ?pekçi Caddesi in Istanbul, and you’ve found your hotel. Situated above the shop is The"> a sumptuous design haven with 44 enormous rooms (some with terraces), a Pilates studio, a lobby-area bistro, and organic amenities. Rooms from $207/night. 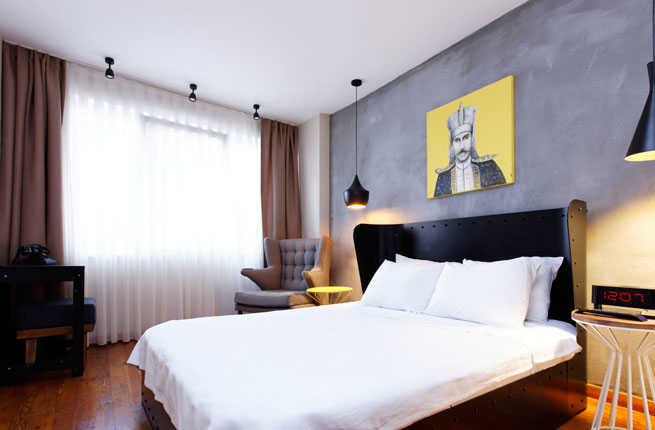 The SuB"> feels like an Ace Hotel with its hip, Brooklyn vibe, quirky art and accents, and rustic-chic lobby and café. But it sits in one of Istanbul’s oldest neighborhoods (Karakoy) and has a distinct focus on the flavors of its surroundings, offering traditional Turkish food and drink. Rooms from $97/night. 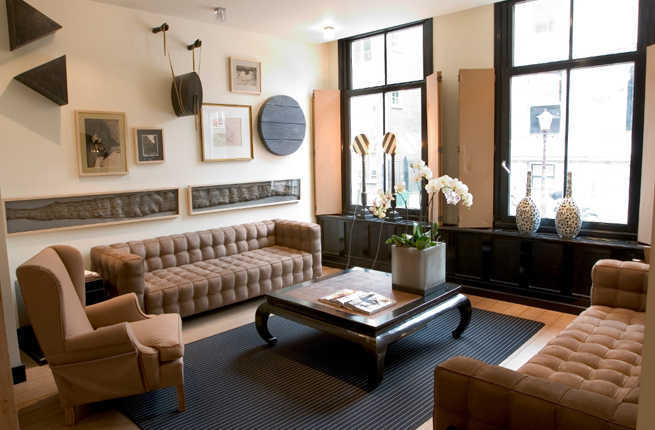 Amsterdam’s Hotel"> is in high demand, so you’ll want to book early. It is on prime real estate, a stroll away from the Museumplein and some of the best cafes and shops in town. And it’s colorful and modern design keeps the in-the-know travelers coming back time and again. Rooms from $78/night. 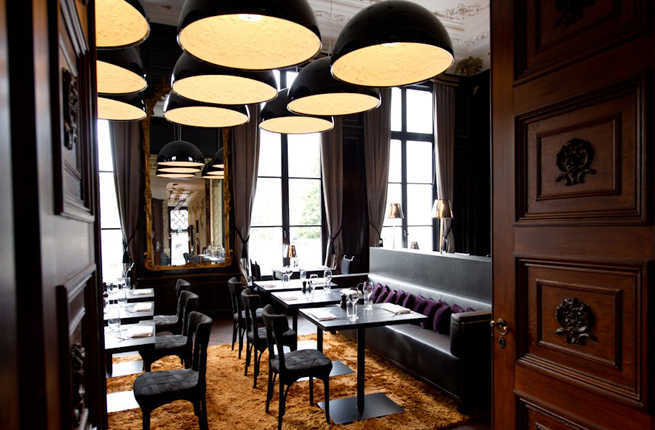 As the adage goes: When in Amsterdam, sleep along a canal. (Or something.) Lush, dark browns and purples in the Canal"> 23 rooms have a melodramatic feel, particularly when paired with the sleek, intimate Great Room restaurant. Have a cocktail in the courtyard, and of course scope out the canal views. Rooms from $195/night. 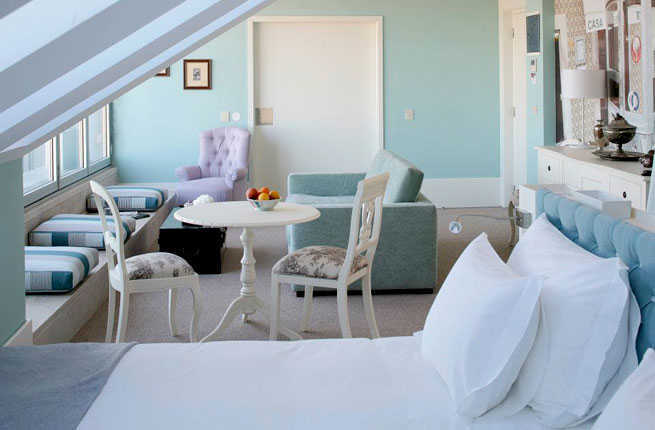 Each floor of Lisbon’s LX"> pays homage to the city’s attributes—a Fado floor is dedicated to local music, the Tejo floor is focused on the river, and the Bairro Alto floor is an ode to the city’s hippest hood. Pair that with a great locale and light, airy designs, and you’ve got a winner. Rooms from $104/night. 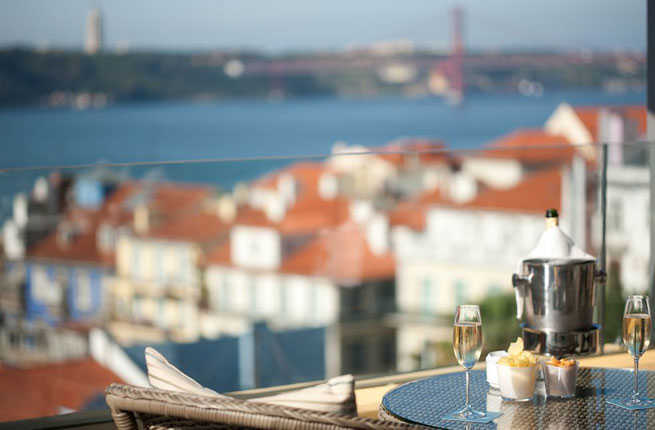 Smack in the best location in town, you’ll find the effortlessly chic Bairro">. On the hotel’s rooftop, you’ll cheers with Lisbon locals as you gaze at the unparalleled view, and in its contemporary rooms, you’ll find an ideal home base for seeing the city’s sights. Rooms from $208/night. 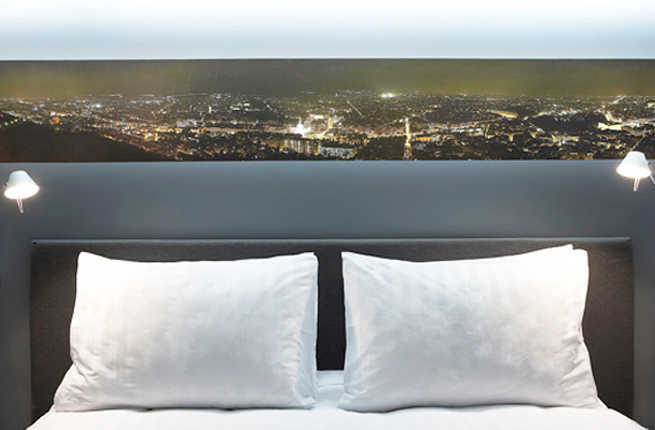 On a small side street in Athens’ posh Kolonaki neighborhood (called the Beverly Hills of Athens), is the Periscope">, so named for the great panoramic photos that line the guestroom walls. The hotel is small, but perfectly situated and with delicious breakfasts and friendly service, you can’t go wrong. Rooms from $134/night. 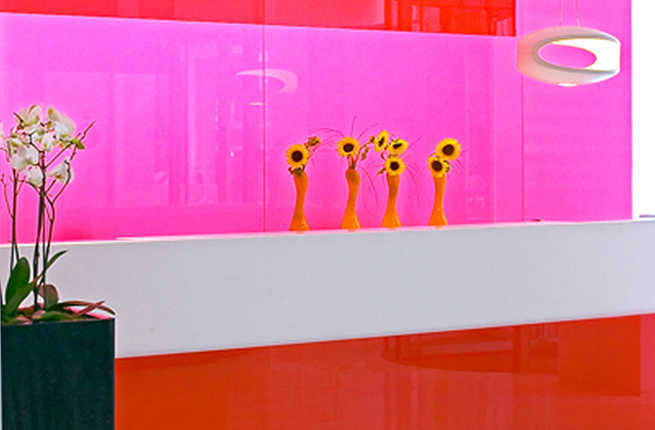 If the Periscope is sleek and neutral, the Fresh"> is its design opposite. Highlighter-bright colors abound in this happy hotel in downtown Athens. A stone’s throw from major sites, the hotel also offers a swimming pool, sauna, and the glam Air Lounge Bar. Rooms from $135/night.