How a pandemic created a cult.

I am standing beneath London in the secret lair of a giant cult that has confused scientists for 1,500 years. They worshipped a bull-slayer, were sworn to secrecy, and performed bizarre rituals in concealed, underground temples like this, more than 200 of which they operated across Europe. Devoted to the Persian sun-god Mithras, this all-male cult grew out of one of the world’s worst-ever pandemics in the second century, the Antonine Plague, and then spread over the continent.

The Cult of Mithras was exposed in London by another global catastrophe—World War II. In 1940, over 57 consecutive nights, the Nazis rained bombs upon the English capital, killing more than 40,000 people and destroying thousands of buildings. Amid this rubble emerged an extraordinary find.

Archaeologists surveying the flattened cityscape after WWII found the remains of an unusual structure built in A.D. 240 when this city was called Londinium and was controlled by the Romans. As they carefully excavated this building, the scientists were unable to determine its purpose. Then, on the final day of digging, the mystery was revealed. They unearthed the sculpted head of Mithras the bull-slayer, just like those found at Cult of Mithras temples all over Europe.

Now, these remains have been turned into one of London’s most unique and attractive tourist destinations, which helps explain the curious origins, beliefs, and rituals associated with the Cult of Mithras. Known as the London Mithraeum, or the Temple of Mithras, it was opened to the public three years ago. 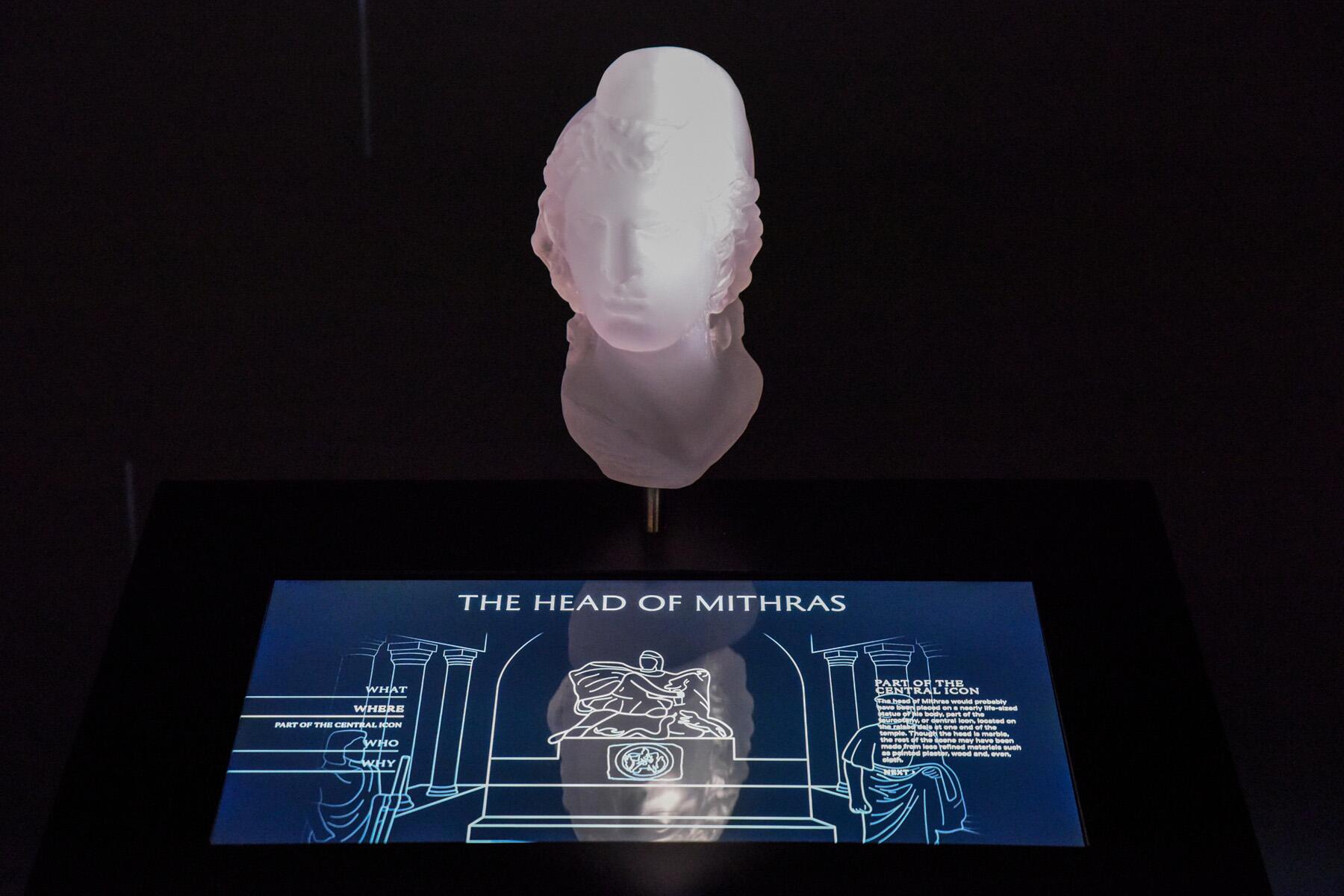 The Mithraeum sits below Bloomberg’s enormous London headquarters in the historic heart of the city, not far from iconic tourist attractions like the Tower of London and St Paul’s Cathedral. I entered the building at street level and found a modern foyer home to an art exhibition called Bloomberg SPACE. The walls of this room are decorated with song lyrics about London, providing a cheery introduction to the somber temple below.

At the top of the staircase, which leads down to the temple, is a wall filled with Roman artifacts. When this site was excavated in the 1950s, it proved to be an archaeological treasure trove. More than 14,000 individual artifacts were unearthed, as well as 63,000 shards of Roman pottery and three tons of animal bone.

Past this display, down one flight of steps, I arrived in a long, darkened museum. The lack of light in this mezzanine floor facilitates the use of projected animations of figures from London’s Roman past. This might come as a surprise to some, but London was founded by the Romans, not by the Brits. Almost 2,000 years ago, after they took command of most of England, the invading Romans decided to construct a new city by the banks of the Thames River. They named it Londinium. Within a century, Londinium had become a busy settlement and so the Romans decided to surround it with a huge fort. 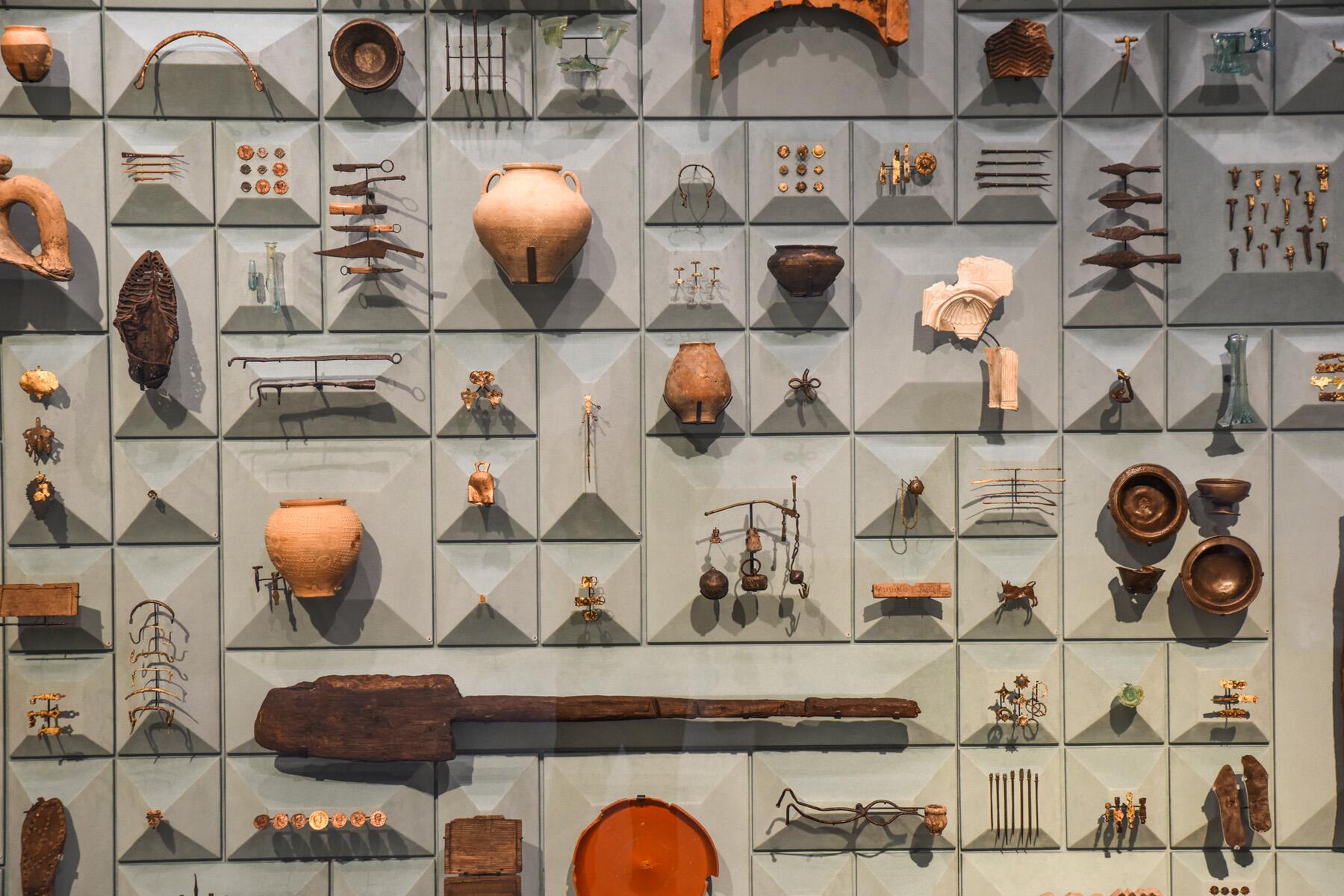 It was within this citadel, about 200 years after Londinium was born, that a Roman soldier named Ulpius Silvanus decided to build a temple to Mithras. Or, at least, that’s who scientists believe probably constructed the Mithraeum—they don’t know for sure. The Cult of Mithras is so peculiar, so mysterious, that researchers concede they have limited hard facts about who they were and how they operated.

“Almost everything we know about Mithras today is the result of interpretation,” states the written guide to the Mithraeum, which I was handed as I entered the complex. “There are no accurate eyewitness accounts of how Mithras was worshipped or descriptions from members of the cult of what Mithras symbolized.”

What they do know is that the cult’s icon is of Mithras slaughtering a bull. This is widely believed to represent the myth of creation, with the death of this strong creature leading to the birth of new life. The bull-slayer image was typically carved in stone and acted as a Mithras temple’s focal point, around which rituals were conducted.

The Cult of Mithras is so peculiar, so mysterious, that researchers concede they have limited hard facts about who they were and how they operated.

Artworks discovered in Mithras temples across Europe have shed light on how these ceremonies typically worked. They suggest the cult had up to seven levels of members, with lower-ranked participants having to present sacrifices to their superiors, sometimes while naked and blindfolded.

I imagined such a scene playing out before me as I descended from the mezzanine museum into the Mithraeum. The temple remains were relocated from here to a different site in the 1960s, but now the temple’s been returned to its original site and painstakingly recreated using ancient bricks and materials collected during its excavation. 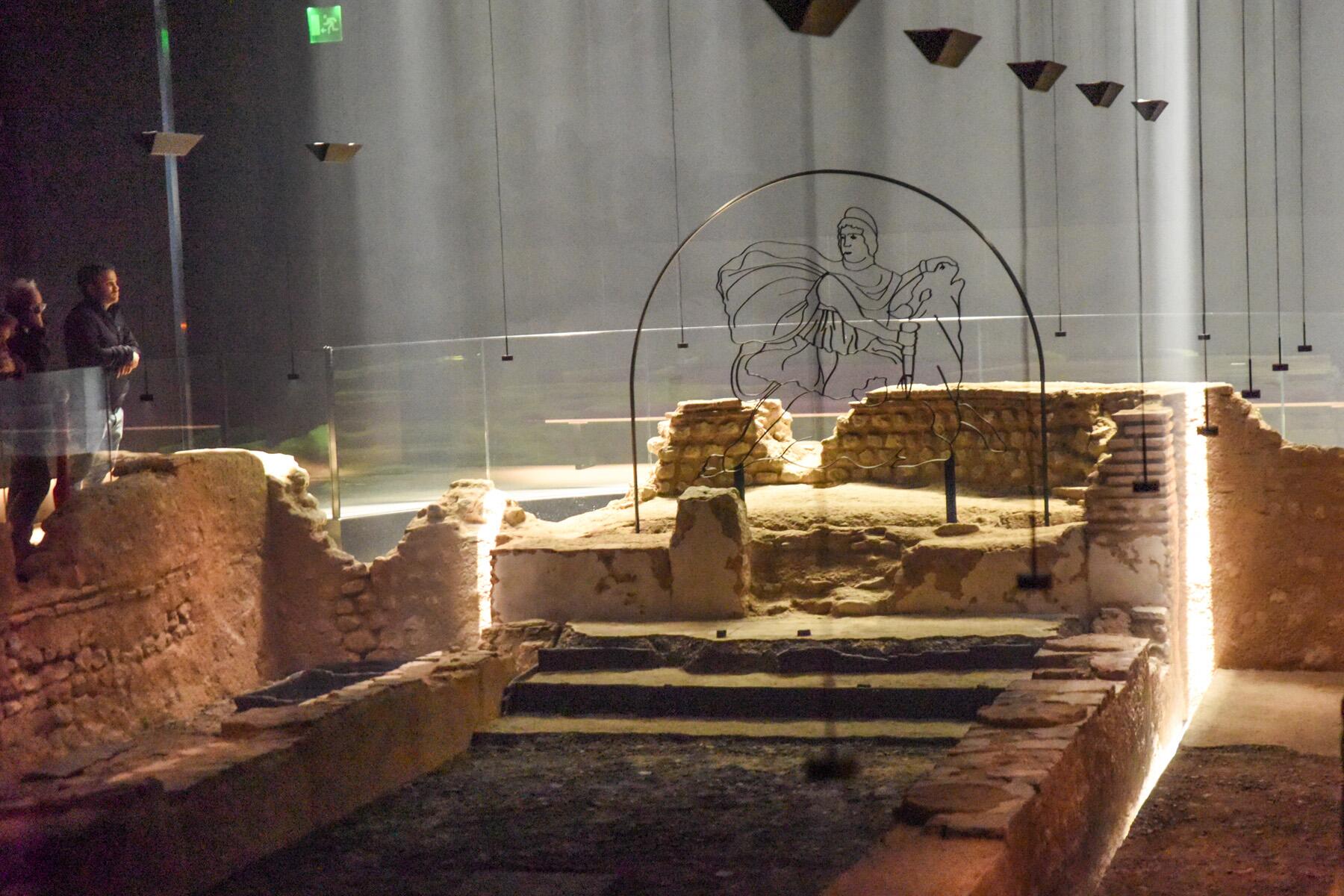 About 60 feet long and 26 feet wide, the Mithraeum is large compared to most Mithras temples, and visitors are able to move over the ruins and around its perimeter on an elevated walkway. I was particularly focused on its central nave, which is where the cult performed their rituals. Surrounding it are two aisles that had seats for up to 30 members.

At the cult’s peak, in the third and fourth centuries, it is believed to have thousands of members in Europe. Although they worshipped an Iranian god, the cult’s heart was in the Roman Empire, where it first emerged in the late first century. Its membership boomed in the second century as this empire was smashed by a 15-year pandemic, the Antonine Plague, which killed more than 60 million people.

The outbreak of what historians think was likely smallpox was especially damaging to the Roman Empire, which is believed to have suffered up to 3,000 deaths a day at the peak of this pandemic. So brutal was its impact that many Romans turned to religion for solace, while others sought comfort by joining the Cult of Mithras. During the pandemic, this cult grew especially popular among members of the Roman army, who were on the frontlines and thus heavily exposed to the chaos wrought by the plague.

Now, as the coronavirus pandemic sweeps the world, this baffling cult is having its secrets revealed to a wide audience. London’s fascinating Mithraeum continues to welcome visitors, who descend beneath the city into an eerie temple which was hidden for more than a millennium by a shadowy group of men devoted to a sun god.