People who say British food is terrible clearly haven’t been to London in the last 20 years. The English capital, at turns debonair and down-to-earth, is one of the greatest cities in the world for eating, and there have never been more delicious options than there are right now. So here are some priorities: Pedigreed doughnuts, the East End, a sirloin the whole town is talking about, and more. Drooling yet? Read on to discover five of London’s food experiences you won’t soon forget. 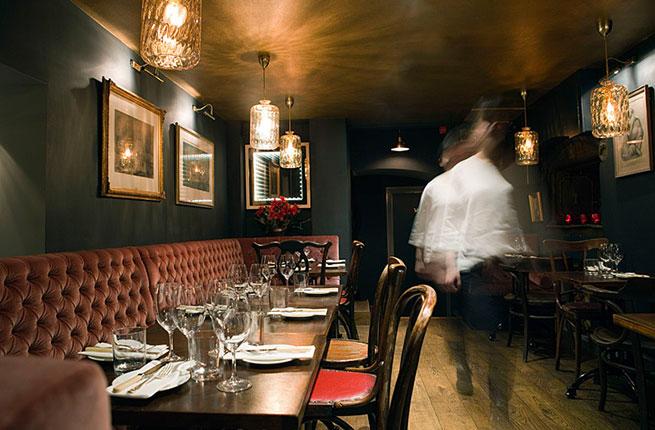 When the willowy servers warn the Galician sirloin will take 45 minutes, they’re not fooling around. “We cook [the steak] over English wood on the grill, [then] allow it to rest above the grill, ensuring that while it rests it still takes on the flavor of the smoke and wood,” explains Kitty Fisher’s (average main $28) hotshot chef/Londoner obsession, Tomos Parry. Fortunately, time is a malleable element here; the Mayfair restaurant feels like a comfy countryside cabin with a dose of bordello swag, a space in which you don’t so much dine as unwind, lingering over bold red wines and after-dinner cocktails at the five-stool boxcar-red bar. With just 40 seats spread across the first floor and cozy downstairs den—when you descend, you get a great look into Parry’s wood-fired kitchen—reservations are very, very difficult to procure. But it’s worth the effort for the signature sirloin, which is sourced from an 8-to-12-year-old Basque cow: “In the UK, we tend to slaughter our cows at 2 years old, but in Spain they celebrate the retired dairy cow. The deep, rich flavor of the meat is like no other.” Once the meat has rested, Parry slices the steak down into medium-rare dominoes that glow from within and serves them with a separate platter of intensely delicious vegetables: Pink Fir potatoes, buttery spinach, and petals of charred onions that cradle killer pickled green walnuts. The steak costs 80GBP ($121) but serves two comfortably. You might want to plan your hotel around this meal. Rooms with mini fridges need only apply. 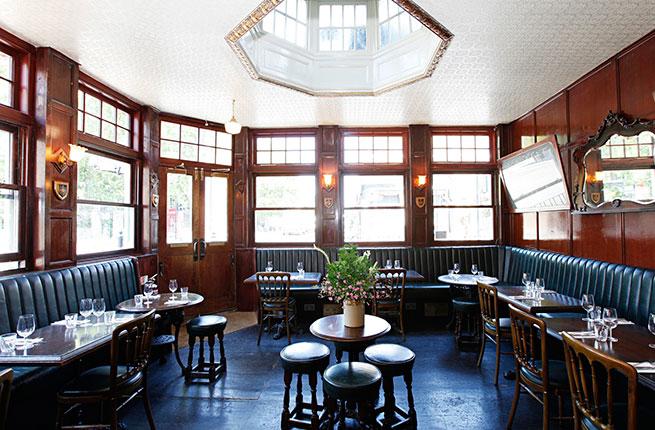 The coolest kids may have migrated farther across the East End, but Shoreditch remains one of London’s hottest neighborhoods—especially for dining. Alums of Fergus Henderson’s seminal restaurant St. John (see #4) have launched their own projects in the once-gritty district, like Lyle’s (set menu $66), where cool, industrial looks belie a warm, convivial spirit. There, in the open kitchen, chef James Lowe recently prepared a mosaic-like terrine of wild game with vivid crabapple jelly and other Instagram catnip. (“Game may contain shot,” warns the menu.) Meanwhile, at polished-up Victorian pub The Marksman (average main $25), even the most obsessive American food nerd should be prepared to Google “Welsh Black” (a breed of cattle), “cos” (romaine), “hipsi” (type of cabbage), and other items from chefs Tom Harris and Jon Rotheram’s thoroughly English menu. Hit both, one for brunch, the other for dinner, killing time between at Old Spitalfields Market. 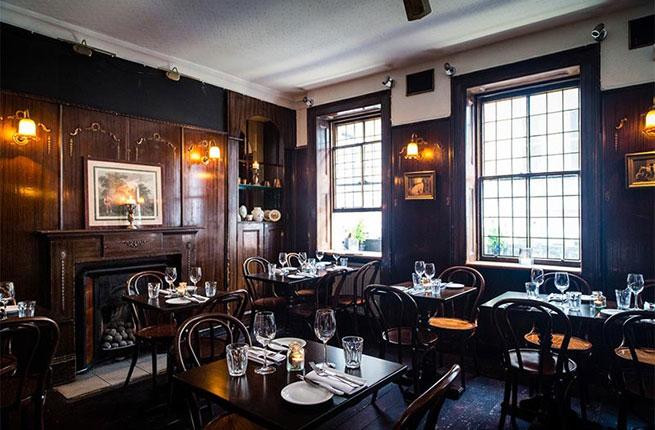 Five years ago, Matt Chatfield started the Cornwall Project, a network linking London restaurants with farmers in Cornwall, which has “the best climate in the UK for growing crops and feeding cattle and has a large supply of quality fish and shellfish,” according to Chatfield. “Over time I realized my main motivation was the creation of lasting [and] worthwhile jobs in Cornwall, a very poor county by UK standards.” The entrepreneur has doubled down on this endeavor by signing on as a partner of the Newman Arms, a cozy pub just off bustling Oxford Street in Fitzrovia. Every Sunday in the second-floor dining room, chef Eryk Bautista turns the Cornish bounty into a set menu inspired by the British tradition of Sunday Roast.

“Pretty well every British person would have had a roast dinner every Sunday for the fist 16 years of the life,” Chatfield says. “We’re trying to recreate that feeling,” although he admits, “everyone says their nan’s is the best.” It’s hard to imagine anyone’s grandmother besting Bautista’s roast rump of beef, sliced into ruby-red petals around a landscape of tender sprouting purple broccoli, caramelized carrots, and (the chef’s favorite) impossibly crispy puffed potatoes fried in rendered animal fat. You get a generous plate of hearty, homey, expertly seasoned and executed food for 18GBP ($27), a tremendous deal in an expensive capital. Don’t miss the sticky toffee pudding for dessert. 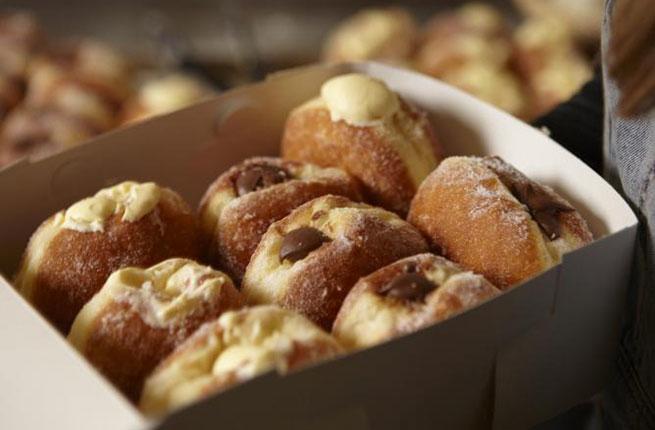 Fergus Henderson’s St. John is one of the most acclaimed restaurants in London, famous for its marrow bones and for its status as a pillar of contemporary British cooking (which is to say old-school, yet modern). The original location now has several offshoots, including a dedicated bakery in the South Bank neighborhood of Bermondsey. It’s only open on Saturdays and Sundays, and you have to beat the crowds along Druid Street to snatch a half-dozen of their glorious filled doughnuts. The bakers only do the stuffed variety—stuffed-stuffed. The sugared pastries are so loaded with house-made jams (raspberry, rhubarb) and silky custards (salted caramel, gingerbread) they feel like they’re about to pop like water balloons. Revel in the messiness of it. 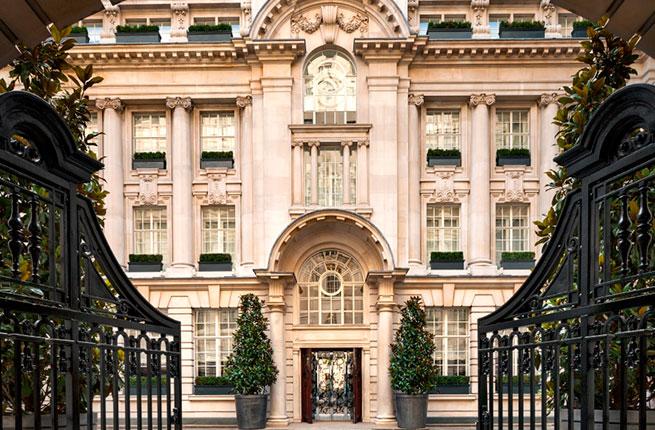 Conveniently located between Covent Garden, Bloomsbury and the City, Rosewood London (rooms from $575) cuts a stately silhouette along High Holborn. All carved limestone, pruned topiaries, and grand, flickering lanterns, the building housed the former Pearl Assurance Company before Rosewood invested 85 million pounds and opened its first European hotel here in 2013. There are many things to love about the property (the doting butlers, the neroli-scented soap, the resident golden retriever, Pearl), but food lovers will be especially seduced by its culinary amenities. The inner courtyard, for example, hosted a Christmas market scented with mulled wine, hot cocoa, and roasting chestnuts earlier this winter.

There are three restaurants (Holborn Dining Room, the Mirror Room, Scarfes Bar) you’ll actually want to eat at; all are accessible from the street and draw a local crowd. HDR is a copper-plated brasserie with a charcuterie bar, wild game program, and a chef, Calum Franklin, who, incidentally, is roommates with Matt Chatfield of the Cornwall Project. French chef Amandine Chaignot oversees the Mirror Room, which hosts a Sunday brunch informed by the Slow Food movement. Indian curries and snacks populate the menu at the clubby Scarfes, named for artist Gerald Scarfes, whose political caricatures decorate the gentlemanly room. (If you’re familiar with the album cover for Pink Floyd's The Wall, he needs no introduction.) The Rosewood pays just as much attention to dining in the room. Room service brings a parade of pressed linen and painted china, tomato soup poured from Staub teakettles, and condiments in dainty Weck jars. Except for alcohol, everything in the well-designed mini-bar is complimentary. With fresh citrus, boutique tonic, and proper glassware, having a G&T en suite is just like having a cocktail downstairs at the bar—except you can do so in a supremely comfy robe.