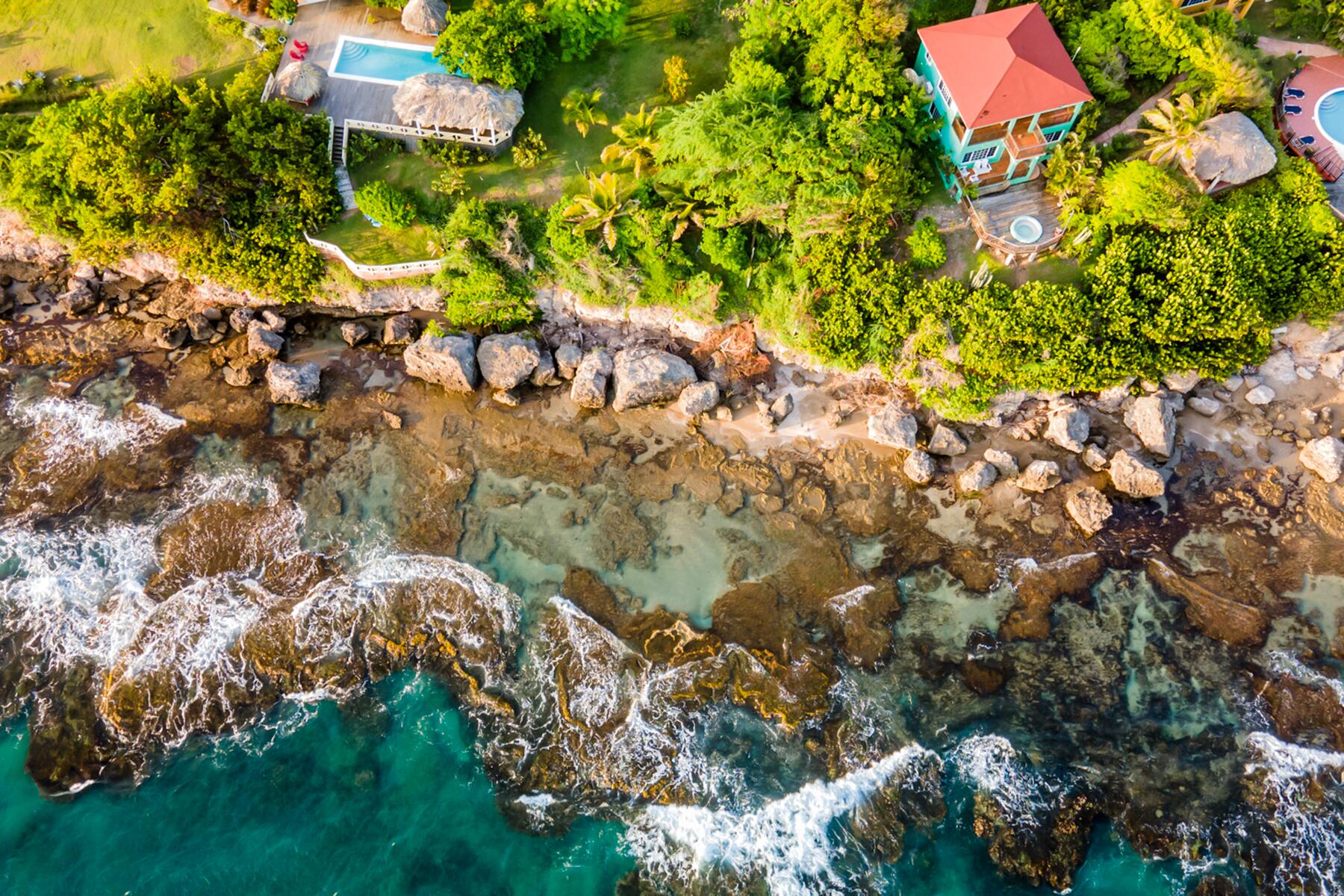 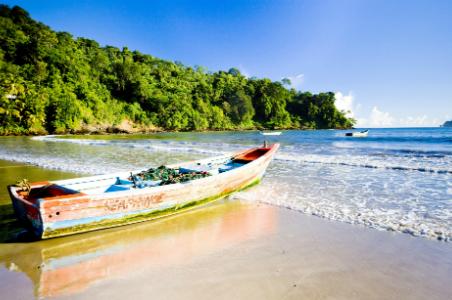 With an easily accessible street-food culture and a fresh selection of fruits and vegetables year-round, it’s impossible to go hungry in the island paradise of Trinidad. Here you'll find items to satisfy everyone from the pickiest of vegans to blood sausage-eating carnivores, but one thing all eaters should note: be careful with the pepper sauce. These are the most common street foods in Trinidad and, though you’re never far from any of them, some suggestions of where you can find delicious versions of each. 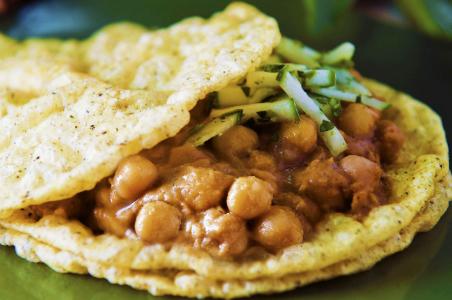 This hand-held, greasy delight, also called channa batura, is perhaps the most famous of the Trinidadian street foods and is traditionally eaten at breakfast—though you’ll find vendors hawking it all day. It begins with two bara (fried flatbread) that are filled with channa (curried chickpeas) and flavored with shado beni (a popular native West Indian herb). Served with tamarind sauce and a variety of chutneys, including coconut or mango, it’s a cheap, satisfying dish found pretty much anywhere. A favorite spot to grab some is the parking lot of the expansive Queens Park Savannah, which transforms into a lively fair with food vendors and occasional live music in the evenings. Another native favorite is Ali’s Doubles (36 Vistabella Rd.; 868-750-1927) in San Fernando. When in doubt, there’s also an app, Eat ah Doubles, with more than 400 vendors listed, ensuring you’re never far away from getting your fill. 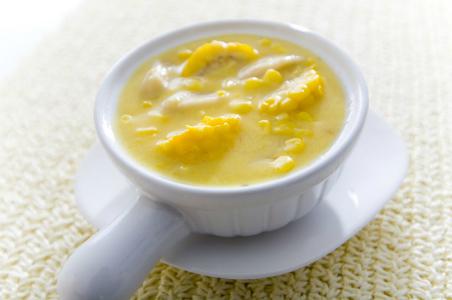 A mixture of corn, channa, pumpkin, dumplings, and whatever else the chef has decided to throw in, this filling, crowd-pleasing soup is served street-side everywhere, from football games to Carnival to, perhaps most often, winding down after a raging fete. Buy a steaming cup at the fair set up at the scenic Lady Young Road Overlook and sip it as you survey the views of Port of Spain below. Or try an elevated version at Chaud, one of the most celebrated restaurants on the island, where chef Khalid Mohammed utilizes fresh, local ingredients. 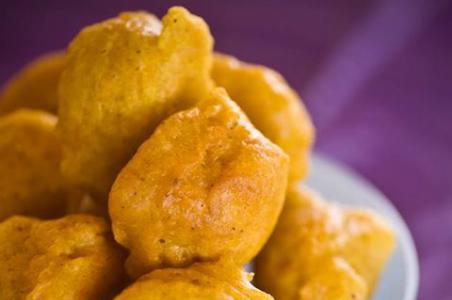 These flavorful fried dollops of spice-filled dough (pronounced “po-loo-ree”) are similar to Indian pakora. They are savory on their own but served mainly as a versatile vehicle for sauces or chutneys. You can easily find them at the Lady Young Overlook. 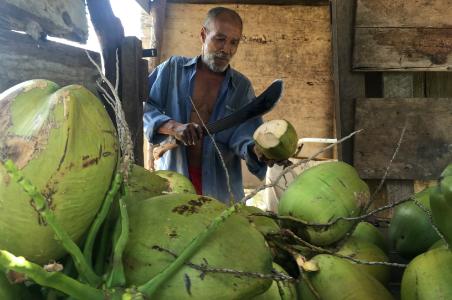 Coconut stands are fixtures of the island, and stopping at one will satisfy both hunger and thirst. Ask for a young coconut, and they’ll chop the top off with a cutlass and hand it to you to guzzle down, no straws necessary. When you’re done, they’ll fashion a spoon from a piece of the husk, so you can to dig into the jelly for a natural electrolyte-laden snack. We found our vendor on a windy road visiting the mountain village of Paramin, which is an agricultural hub for spices in Trinidad. 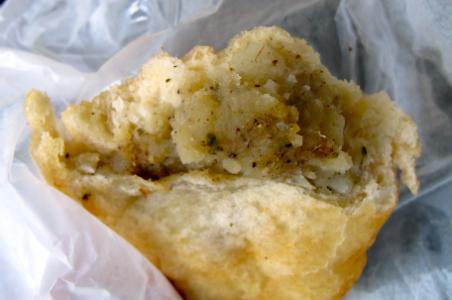 Like a Trinidadian version of a samosa, an aloo pie is an elongated fried pocket filled with potato, mashed up with onions, garlic, masala, and other spices and served with sweet tamarind sauce, a go-to flavoring. Another favorite is saheena, dough mixed with spinach then flash-fried. You can usually find them both wherever doubles are sold, but it’s worth it to take a trip to the San Antonio Greenmarket (Saddle Road, Santa Cruz; 868-221-9116), a gorgeous open-air weekend market focused on locally produced fare, which was started by an expat lawyer from New York. Vendors peddle wares like home-grown vegetables, local honey, alcohol (try the sorrel wine), black pudding, and, of course, aloo pie and saheena. 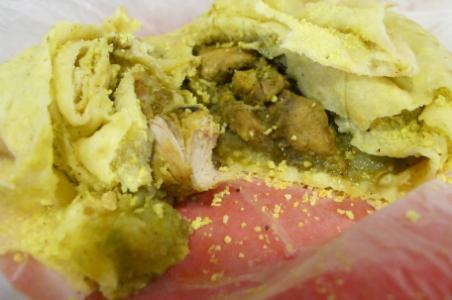 If someone says they’re going to “buss ya face,” you should duck before they punch you; if someone offers you a buss-up shot, or paratha roti, take it. This light roti is hand-beaten and shredded, giving it more surface area to soak up whatever curry you eat with it. The Eat ah Doubles app should help in finding a good roti spot. It’s a little messy to take on the go, though, so if you’re moving, try a chicken roti, which, just as the name suggests, is chicken swaddled in roti. Typically the chicken still has the bones in, so ask for it boneless.

To souse is to dunk something in a sauce used for pickling. And in the Trinidad sense, that means meat—usually offal, but also anything from chicken feet and pigs trotters to cucumbers steeped in an acidic liquid of lime, onion, and peppers. It’s not for everyone—especially when you see those bony feet sticking out—but for the heat-seeking and adventurous, it’s a snack that pays off. Find it on the streets of St. James, a popular nightlife district, as souse is usually consumed pre-carousing. It’s also believed to be a great cure for hangovers. 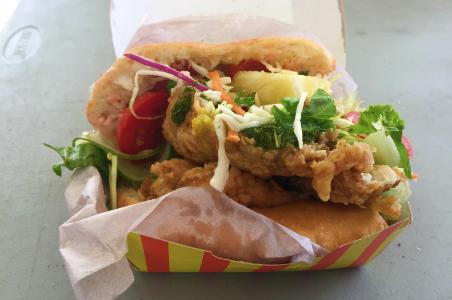 Saying bake and shark is like the best fish taco you’ll ever eat is a simplistic way of describing this delectable meal. (Note that sharks are in danger of being overfished in Trinidad, but shrimp is a worthy replacement.) It starts with the humble “bake,” lightly fried bread, which is filled with chunks of breaded and fried fillet. While it’s good on its own, the key is in the condiments you add yourself. At Richard’s Bake and Shark (Maracas Bay Village, Saint George), you’ll find the longest line and the largest selection of toppings, including lettuce, tomatoes, coleslaw, and pineapple slices, alongside shado beni chutney, hot sauce, tamarind, and dressings. If you’ve done it right, the shark in your sandwich should be fully covered. 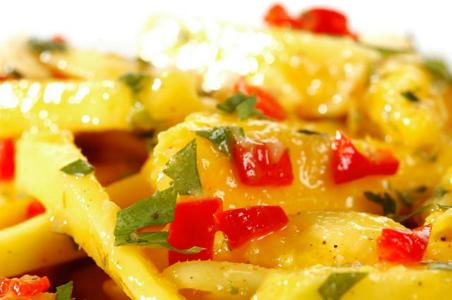 There is an abundance of fruit in Trinidad, which makes the island a vegan paradise. You’ll always find something in season: mango, papaya, grapefruit, passion fruit, cashew, guava, pineapple, and more. But as with all their food and lifestyles, Trinidadians like to spice it up. Chow is a dish that takes fruit—usually mango or pineapple—and adds hot pepper, black pepper, salt, lime, onions, and shado beni. It’s a sweet and sour experience that captures the local, spicy personality. Find some at the Maracas Overlook, alongside Indian sweets, preserved fruit like salt prunes, and magnificent views.