An ecotourism boom has made Vietnam’s massive caves popular adventure destinations. But getting to them, and getting out, is not for the faint of heart.

The Vietnamese outpost of Phong Nha is unremarkable on a map. But the rural town of about 1,000 is perched on the edge of an astonishing destination—Phong Nha-Ke Bang National Park. The town’s proximity to the park has created an ecotourism boom in the region, mostly on the heels of Europeans, Australians, and Americans flocking to hike into the heart of its limestone caverns.

But travelers beware. At the height of the Vietnam War, Phong Nha was the most heavily bombed region in the country. More than 19 million bombs fell in the park’s borders.

Hiking without a guide in this park is expressly forbidden. And even with one, warnings abound: don’t touch anything metal, don’t stray off of the trail, and don’t get close to the snakes. 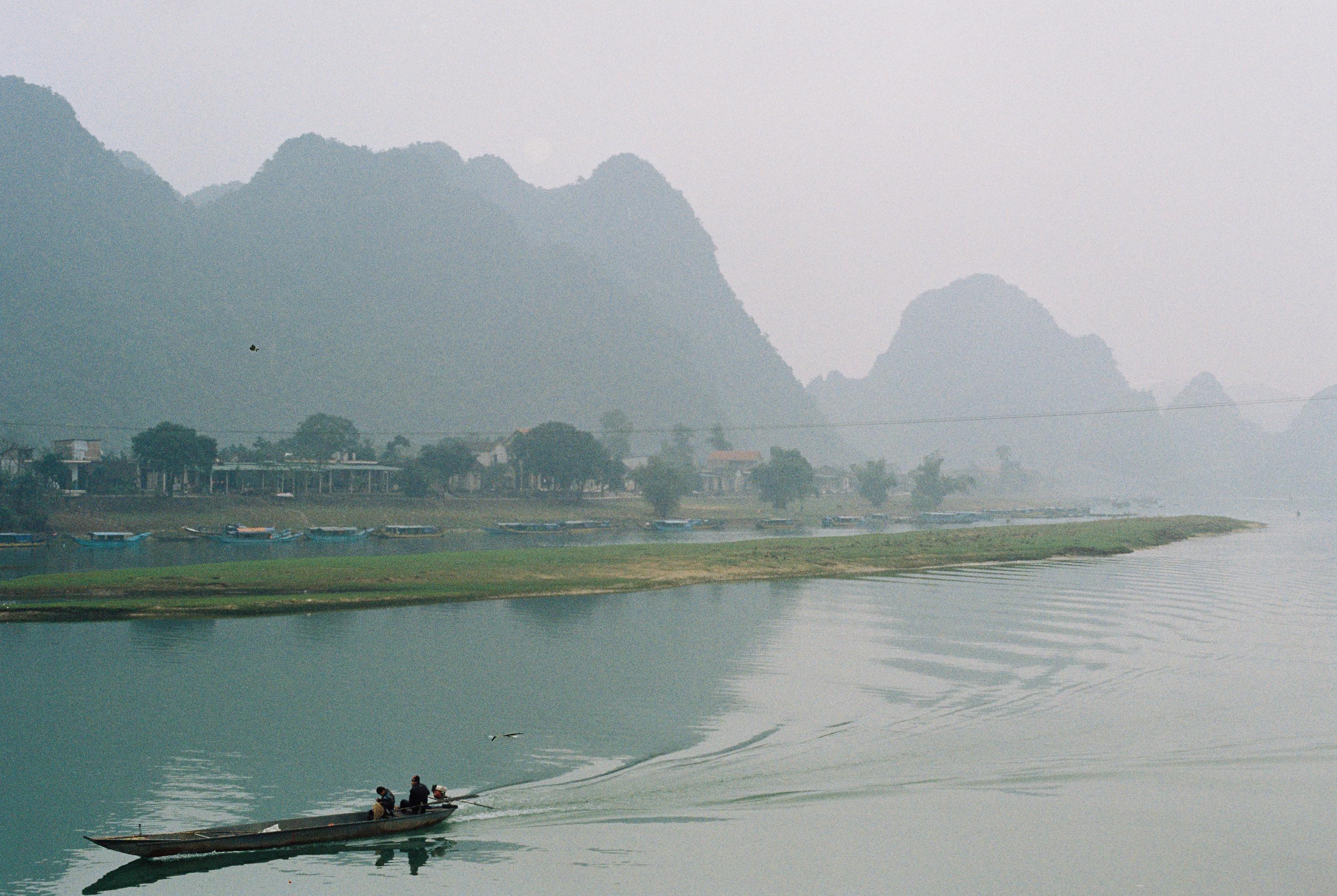 The Song Con River cuts through the town of Phong Nha, about 20 miles from the Laotian border. The town was seldom seen by tourists until an adventure company opened in July of 2011. Until recently, the local economy revolved around fishing, farming, and reclamation of valuable bits inside of unexploded American ordnance. 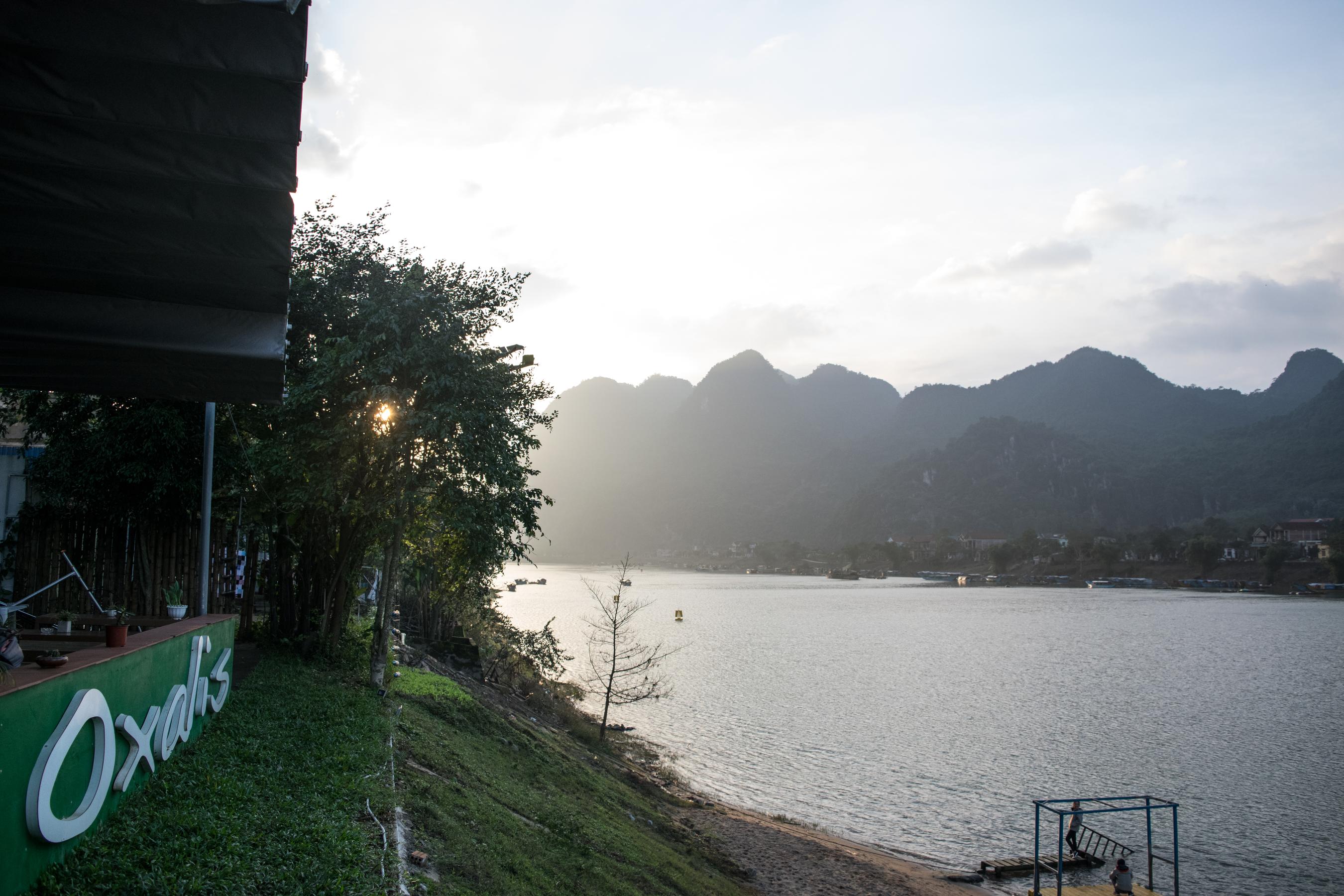 Growing up, our guide explains, a single unexploded bomb could be worth as much as $15—enough to feed a family for a month. Now, many locals make a living as guides and porters with Phong Nha’s ecotourism company, Oxalis Adventures. Despite the dangers of the jungle, the work is safer than dismantling bombs. 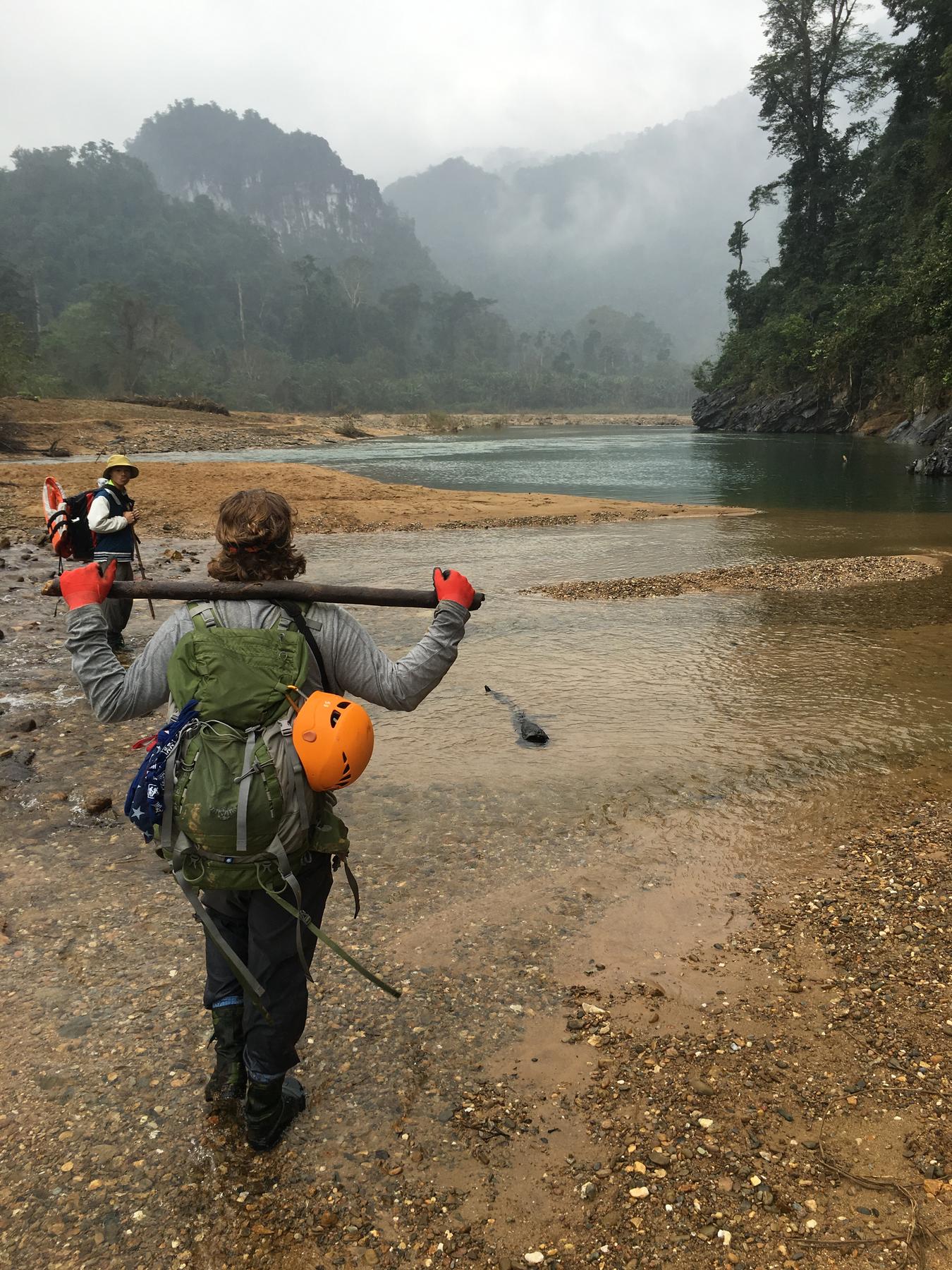 Descending Into the Jungle

The trek to Hang En Cave, one of the park’s three most well-known destinations, is a five-hour hike into the jungle. After scrambling up and over the muddy mountains guarding its secrets, much of the trail winds in-and-out of a riverine valley. Visitors are told to pack an overnight bag, and helmets are mandatory for cave exploration. 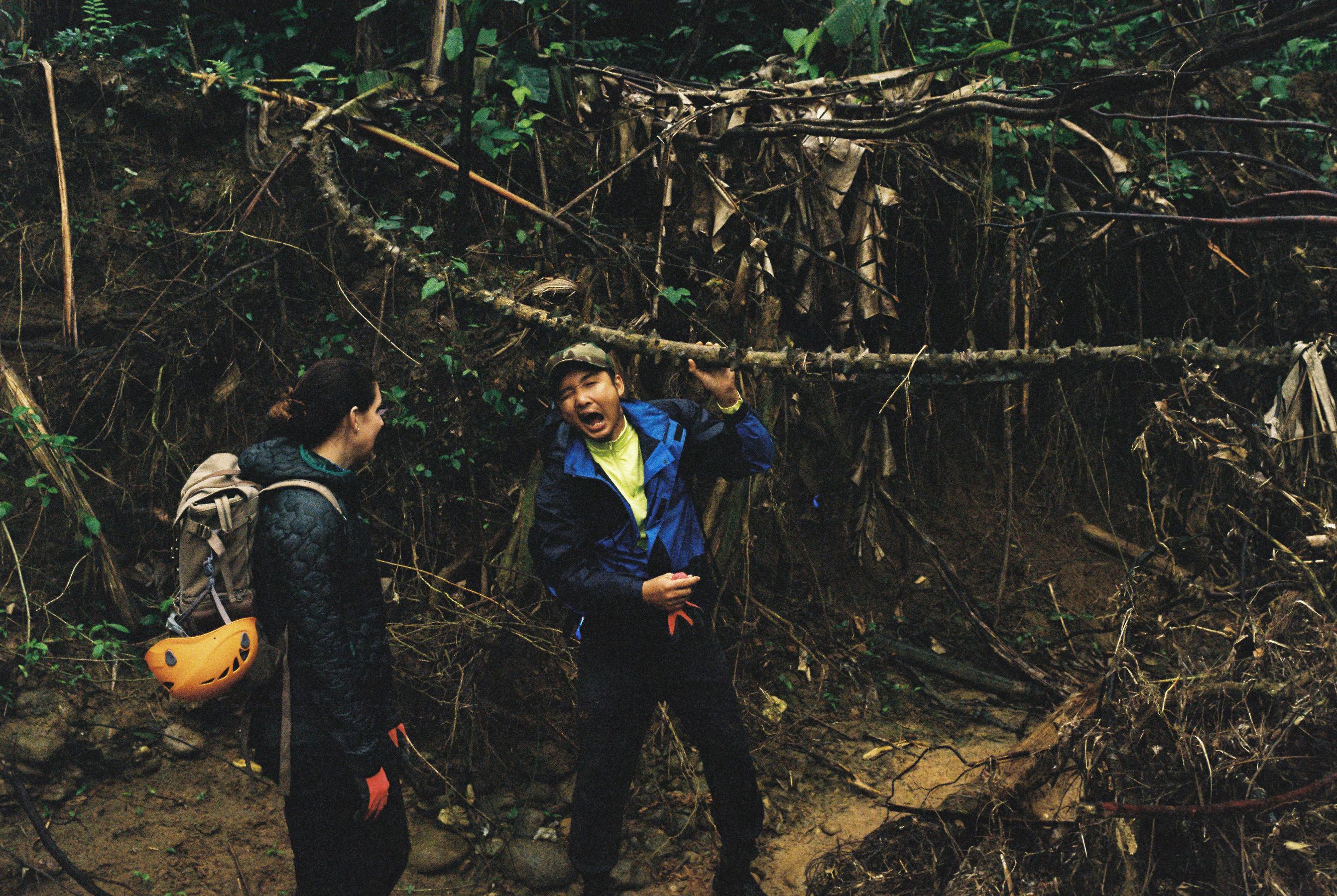 Ken is our chief guide. Ken is a Quang Binh province native who spends hundreds of days per year in the jungle. Here, he warns us about the dangers of Vietnam’s “spikey trees”—poisonous plants the size of elephant ears—and vipers capable of stopping a human heart in minutes. The tigers, he says, mostly stay in Laos. 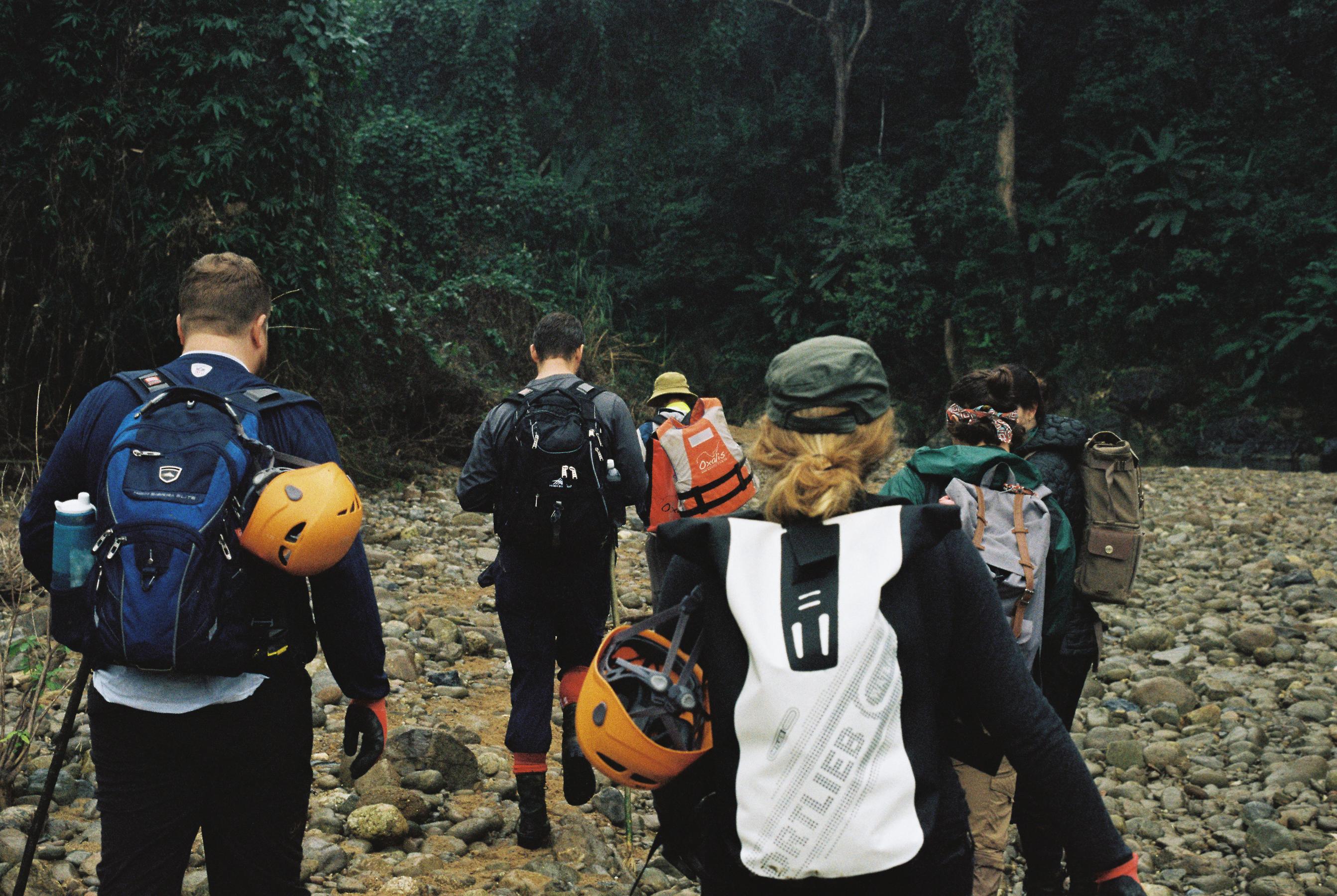 Porters carry lifejackets along a jungle creek bed—for use later at Hang En cave’s built-in lake, or at one of the many side treks available en route to the cave. Oxalis Adventures was started by two guides but now employs several hundred porters in the region. 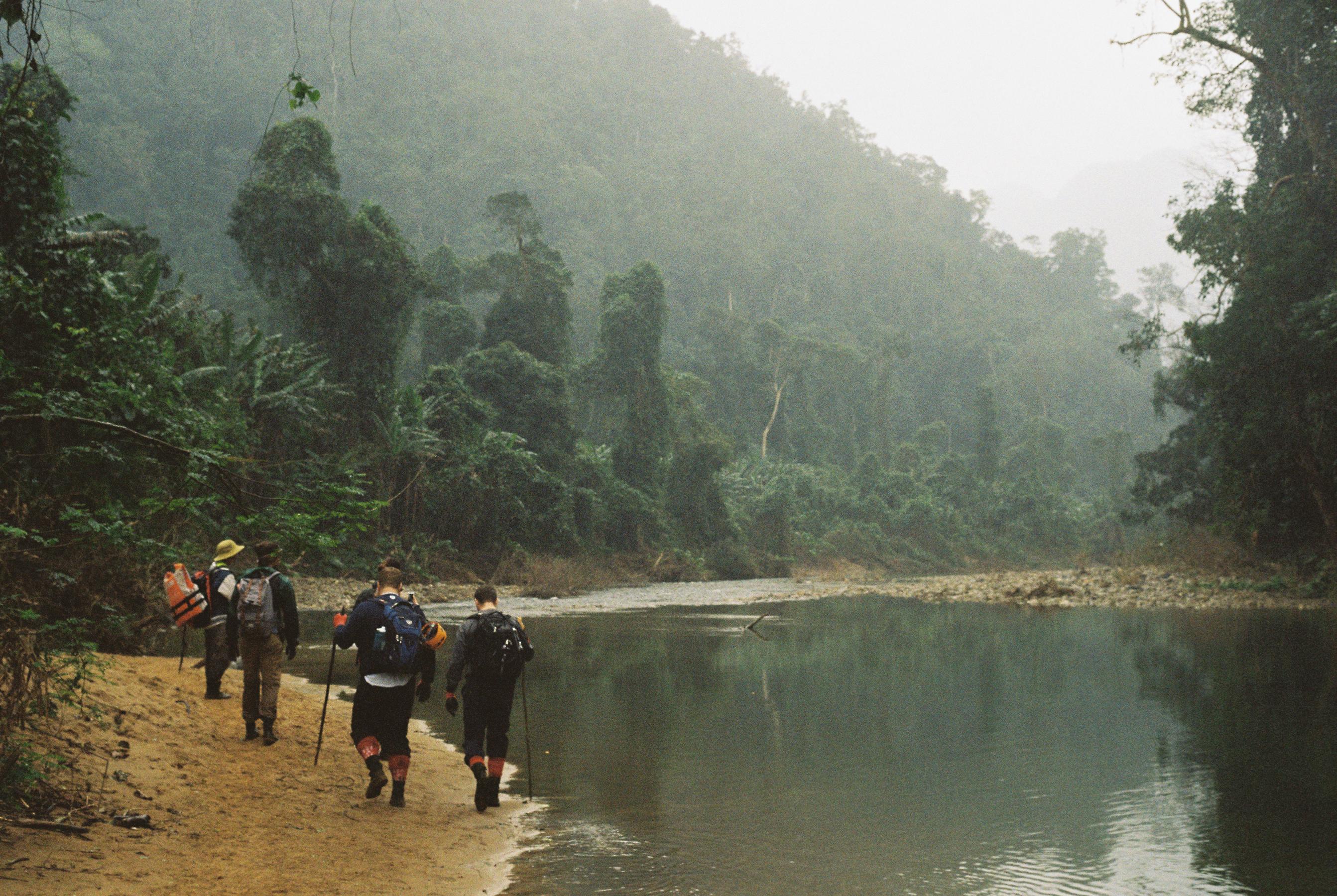 Parts of this valley were used by Hollywood filmmakers in 2017’s Kong: Skull Island. Guides tell us the crew flew in via helicopter, carrying lighting, camera equipment, and generators. Our camera gear is limited to a few digital cameras and one 1970’s-era Nikon. 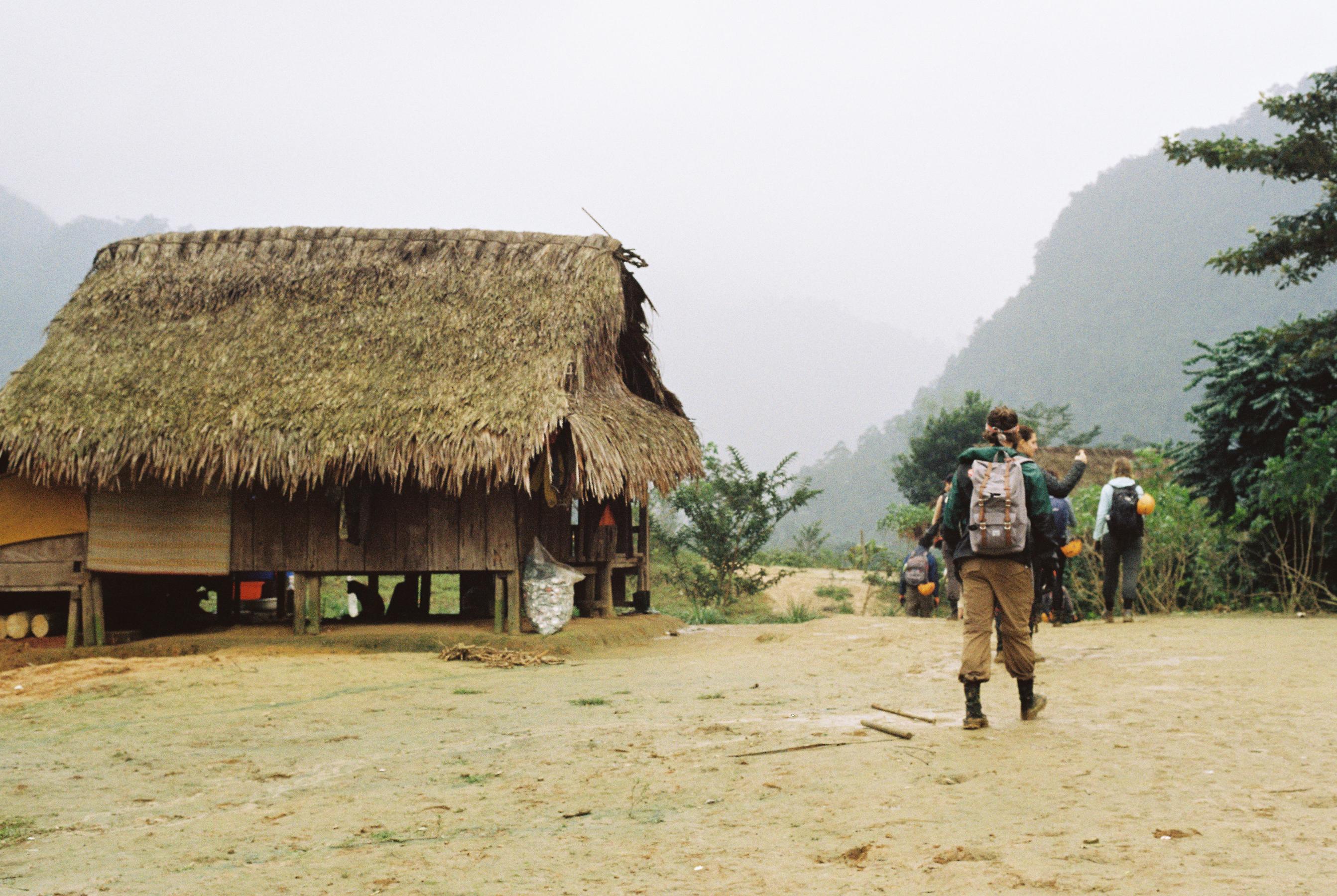 Ban Doong village sits roughly halfway between Hang En Cave and our drop point on the Ho Chi Minh Highway. The community of roughly two dozen people live off-the-grid, selling crops and hosting bands of hikers headed to explore caverns nearby. In exchange for their hospitality, Oxalis has set up a foundation to support the villagers by providing fresh water and infrastructure. At Ban Doong, hikers can advantage of a pit stop to dry out wet feet and pick leeches out of their boots. Hot pho included. 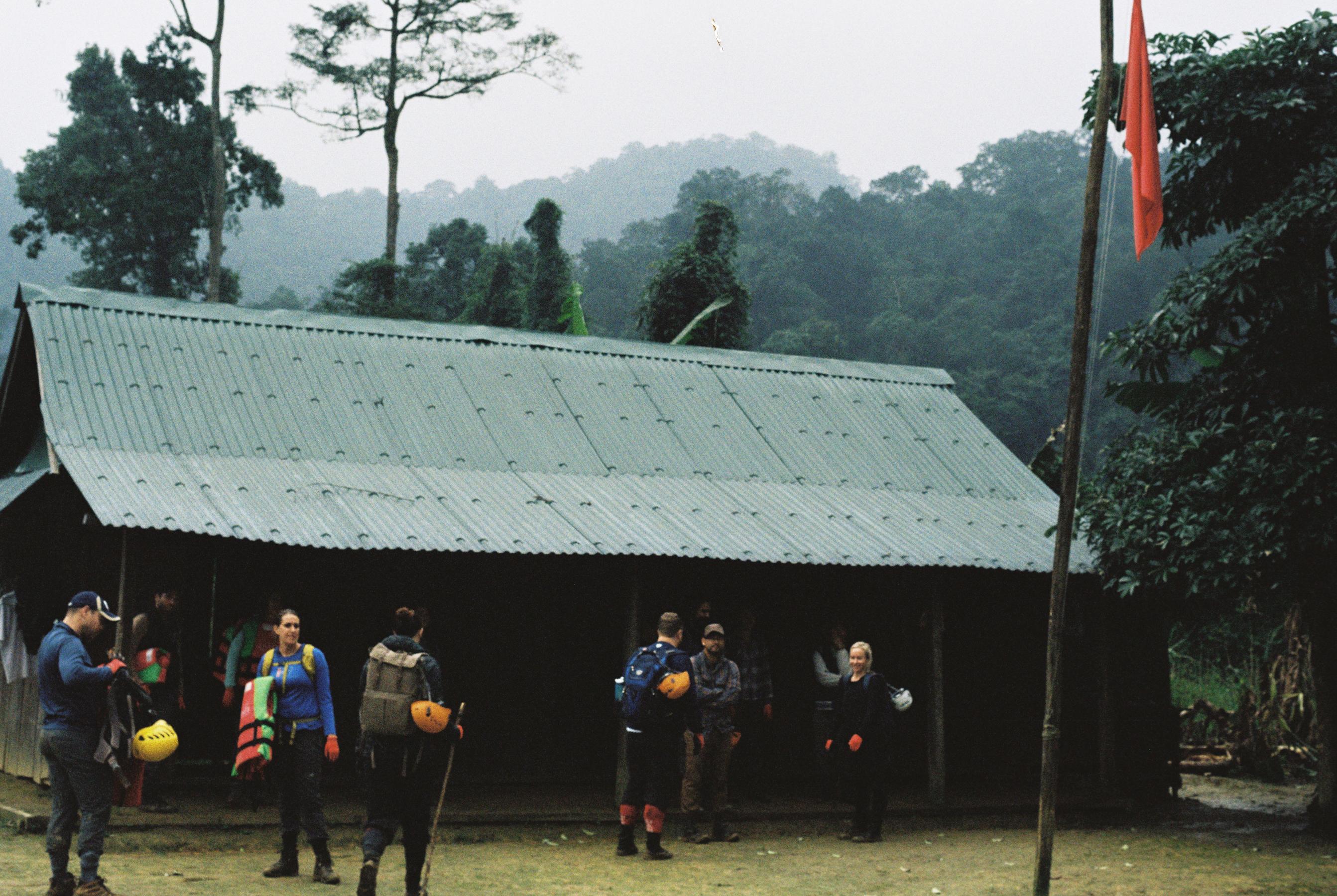 Ban Doong is home to a small schoolhouse. Inside, a chalkboard and wooden desks await local students and foreign hikers who both step inside to learn elementary Vietnamese. 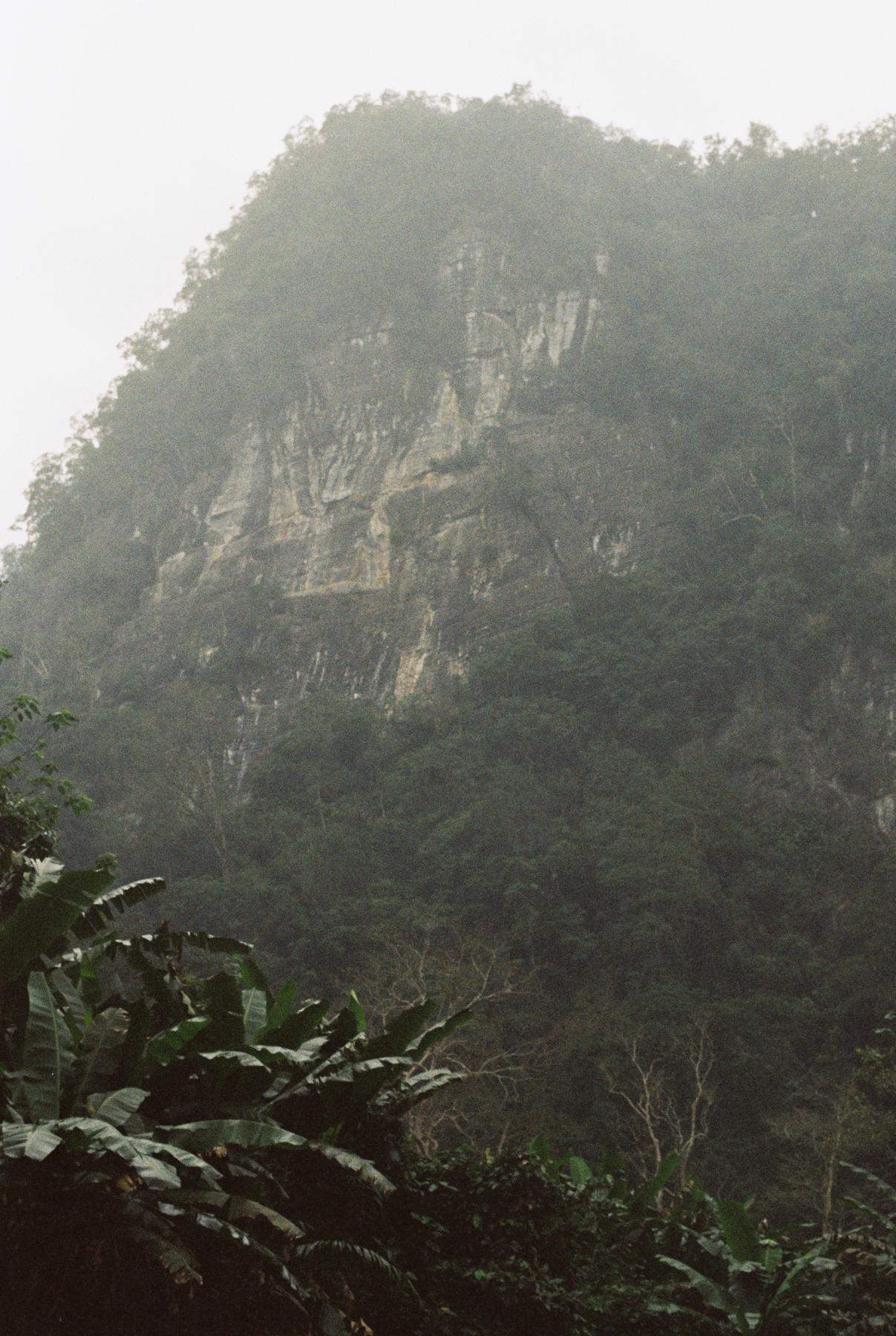 Our final destination, Hang En Cave, rests under a limestone monolith carved into the earth. During the Vietnam War, local villagers would seek refuge from bomb blasts in caves like this, though Ken tells us that Hang En was unknown to locals during the conflict. It was discovered in 1994 by a team of explorers. The entrance is a relatively narrow opening at the rock’s base. 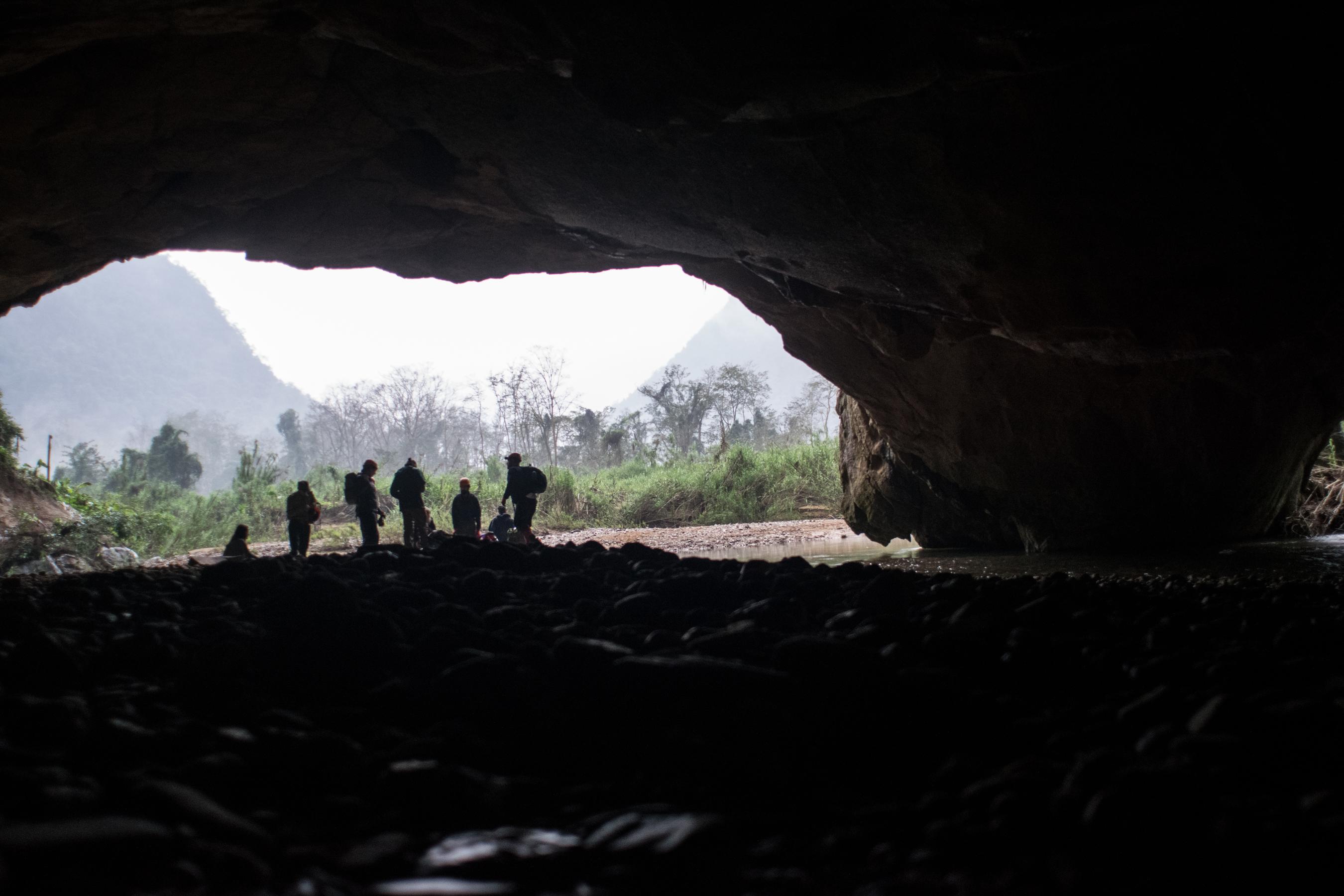 The Entrance of Hang En Cave

Three hours and countless river crossings away from Ban Doong village, our group arrives at the entrance to Hang En Cave. Here, we stop to gear-up with helmets and headlamps before heading towards a pitch black cavern that leads to our home for the night. 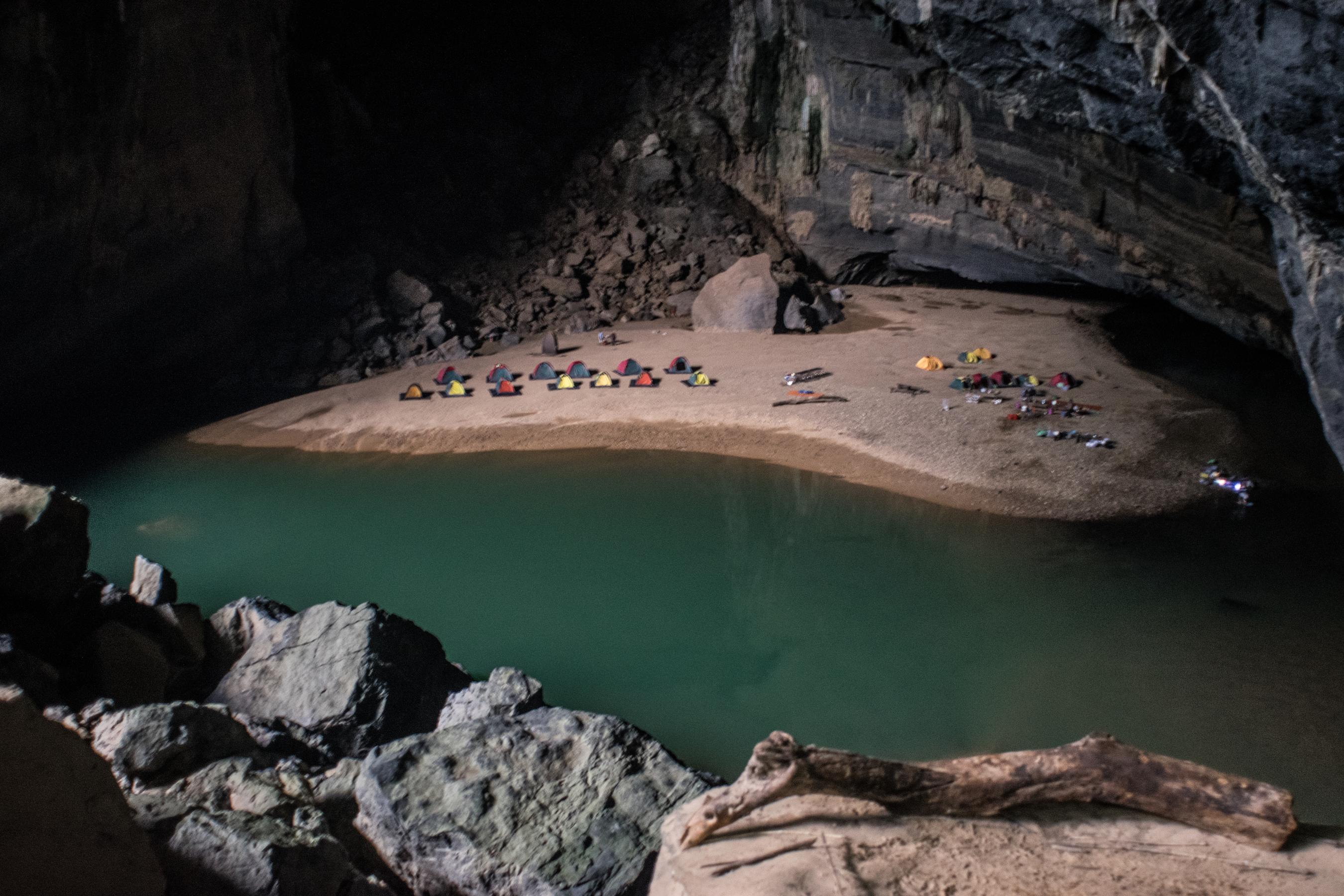 A beachside campsite awaits inside of the cave. From our vantage point above, a short climb down and a final river crossing are all that lie between tired feet, wet hiking boots, and a much needed afternoon of rest at camp. This cavern is estimated to be 300 feet tall. 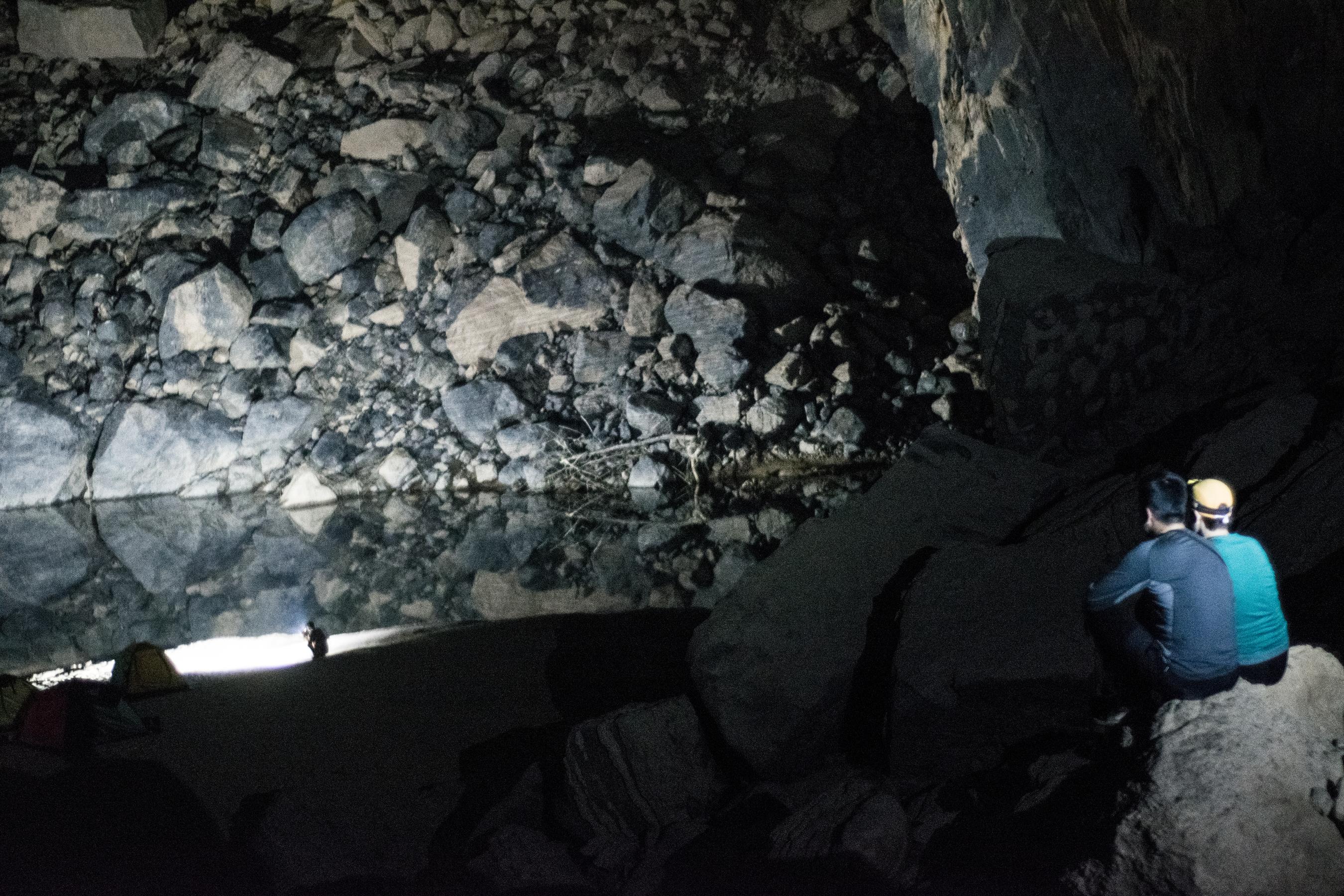 As campfire stories begin below, two hikers perch on an overlook above camp. Ken’s voice echoes in the cavern, “A lot of my friends, they have no arm or no leg now because of the bomb. Even if they weren’t in the war. It’s really crazy.”

Cluster bombs were the most common ordnance dropped here, on what was the Ho Chi Minh Trail. These devices were filled with dozens of tennis ball-sized bombs that sometimes failed to explode. Powerful and portable, their remnants have many uses including fishing and demolition work. But their power comes at a dangerous price. 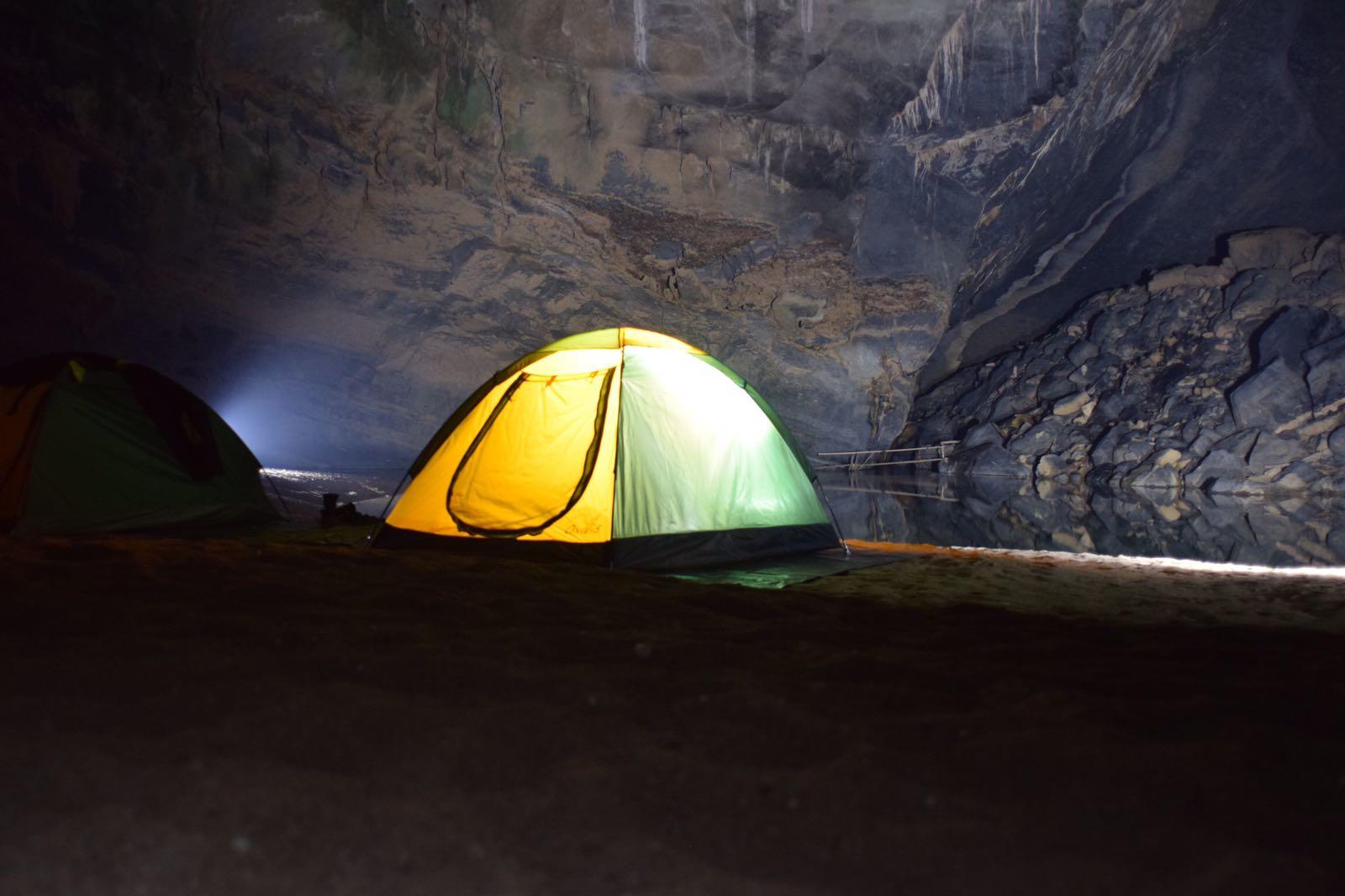 The cave is eerily quiet at night. A few sips of Ban Doong moonshine, some campfire tales, and a stomach full of spring rolls summon dreams of lake monsters and undiscovered cave creatures lumbering through the camp at night. 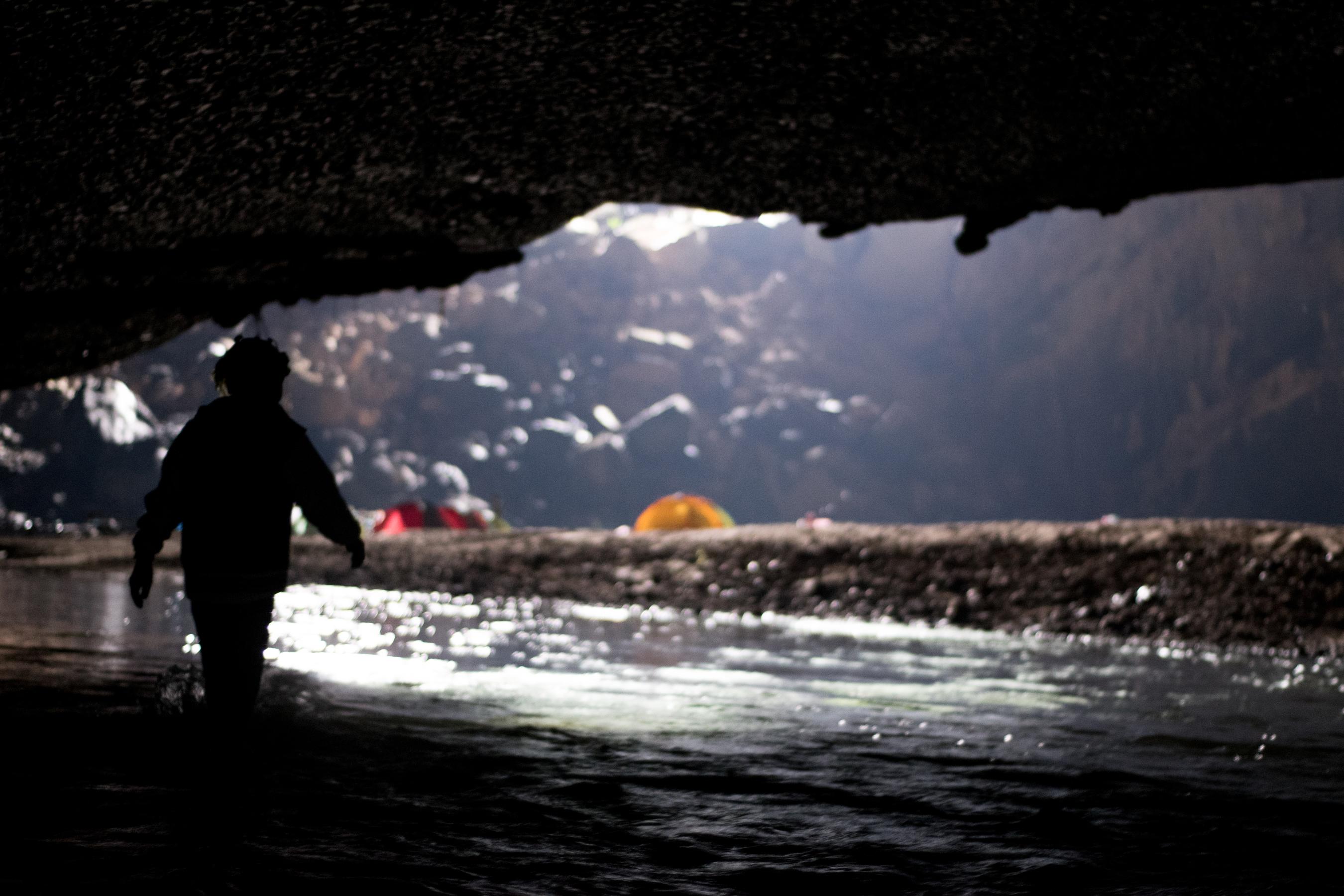 The camp sits on one side of Hang En Cave, under a 300-foot canopy of rock. An early morning adventure to the cave’s far side requires still more river crossings—this time, under the cover of darkness, guided by porters, headlamps, and rope. 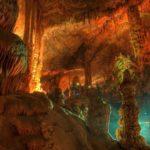 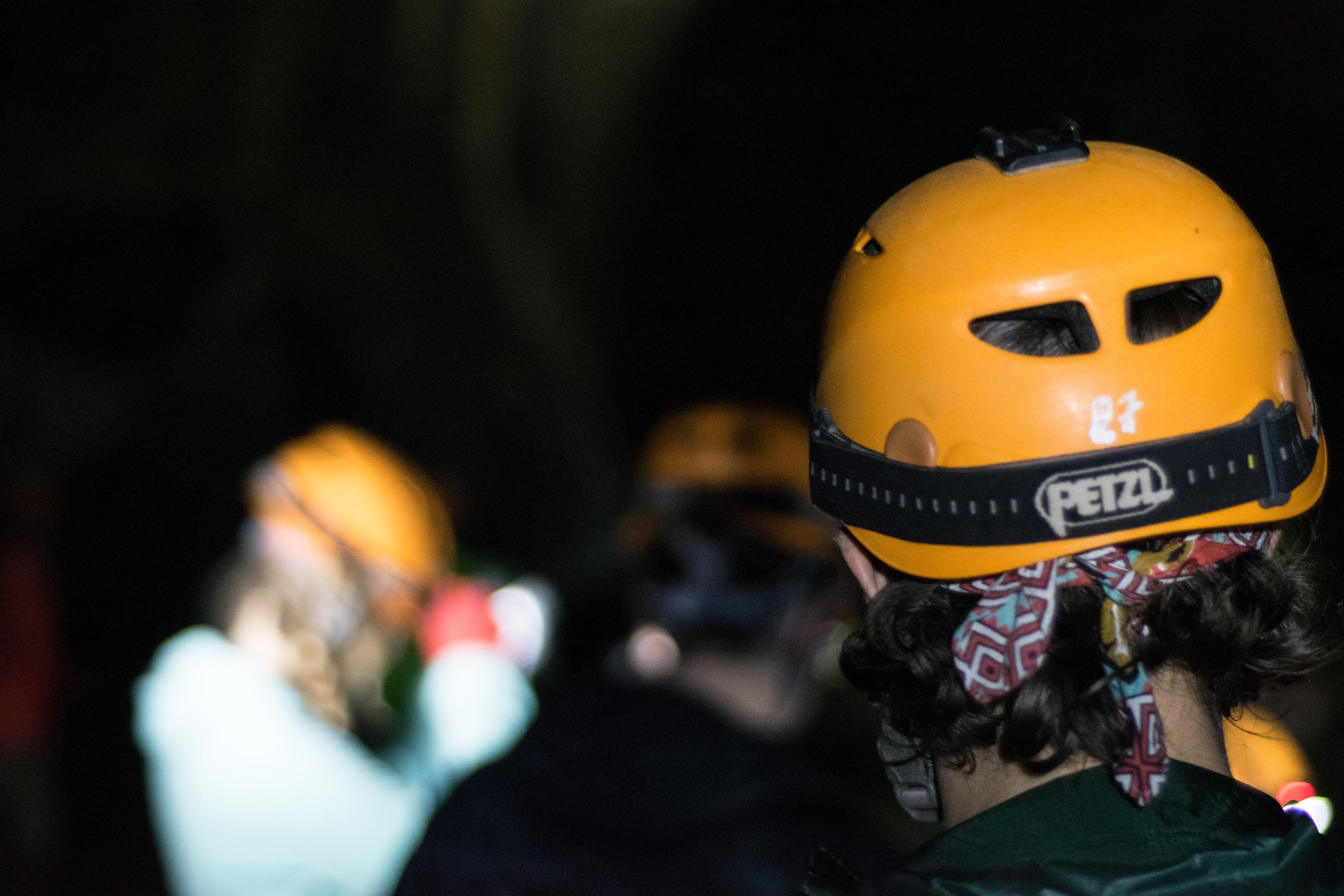 The journey from the camp to the cave’s far side covers 2 kilometers in perfect darkness. Headlamps are closely guarded in watertight bags and ferried through the jungle before being deployed in the cave. 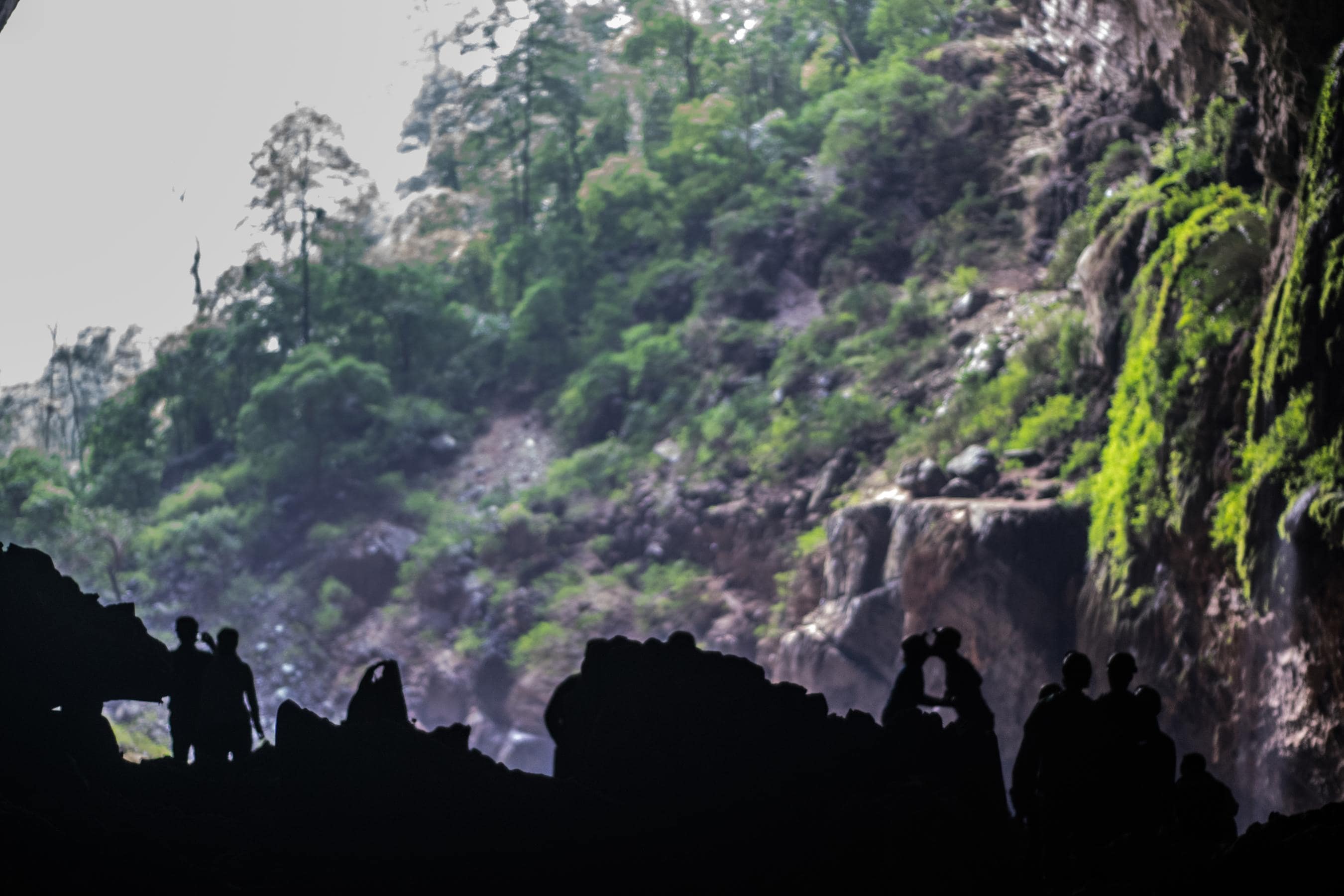 “Neverland” is the grand finale of Hang En Cave. Located at the end of a weaving labyrinth of stalagmites and primordial ooze, this outlook reveals a waterfall, beach, and jungle beyond. Miles down the riverbed, Son Doong Cave awaits explorers with the will to see it all. But for us, this view marks the turning point home.

By day’s end, we would find ourselves back at base camp with a brand new perspective on Vietnam. 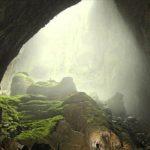 RELATED STORY
Ziplining Into a Cave and Other Underground Adventures in Vietnam
Comments are Closed.
0 Comments