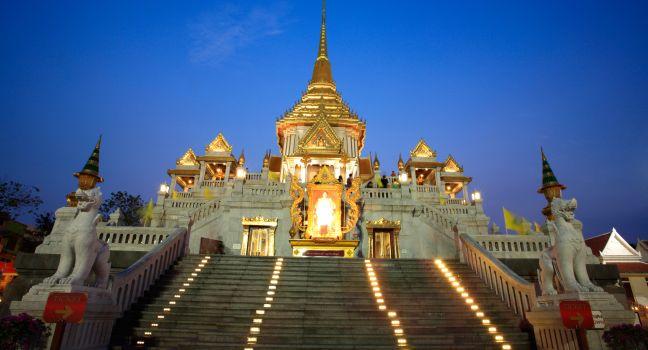 The temple has little architectural merit, but off to its side is a small chapel containing the world's largest solid-gold Buddha, cast about nine centuries ago in the Sukhothai style. Weighing 5½ tons and standing 10 feet high, the statue is a symbol of strength and power that can inspire even the most jaded person. It's believed that the statue was brought first to Ayutthaya. When the Burmese were about to sack the city, it was covered in plaster. Two centuries later, still in plaster, it was thought to be worth very little; when it was being moved to a new Bangkok temple in the 1950s it slipped from a crane and was left in the mud by the workmen. In the morning, a temple monk who had dreamed that the statue was divinely inspired went to see the Buddha image. Through a crack in the plaster he saw a glint of yellow, and soon discovered that the statue was pure gold. In addition to the Buddha, Wat Traimit's museum devoted to Tha Chinese history is worth checking out.

Sight Details:
Rate Includes: B40 for statue, B100 for museum

Book an Experience at Bangkok VIEW ALL