When picturing a tropical vacation, it’s all oversea bungalows, hammocks, snorkeling, and crystal-clear water. You rarely envision yourself on a remote island off the coast of El Nido, worried that a mysterious insect sting could take your life.

That’s the first thing I remember hearing, as a hotel groundskeeper helped me hobble over to the open-air lobby. I was at a remote island resort in the Philippines, just off the coast of El Nido, and I was just stung by a giant centipede. For most travelers from the US or Europe, the idea that a centipede could inflict serious damage seems crazy. But this was not your usual scrawny North American house variety that lurks in dusty basements. It was, by the groundskeeper’s estimation, a 9-inch-long scolopendra is about 1-inch in diameter and reddish-brown in color. Found in subtropical and tropical parts of Latin America, Australia, and Southeast Asia, these carnivorous creatures are known to dine on bats and mice. On this special occasion, however, the monster mistook my foot for dinner.

When picturing our trip to the Philippines, I figured we’d spend our days reading in hammocks, sipping cocktails, trekking through the jungles, snorkeling around deserted coves, and kayaking through El Nido’s famous lagoons. We wanted an off-grid holiday to recover from nonstop Hong Kong life, so we booked a beachfront bungalow about 30-45 minutes by boat from El Nido, the famous beach town in the northwestern corner of Palawan Island. 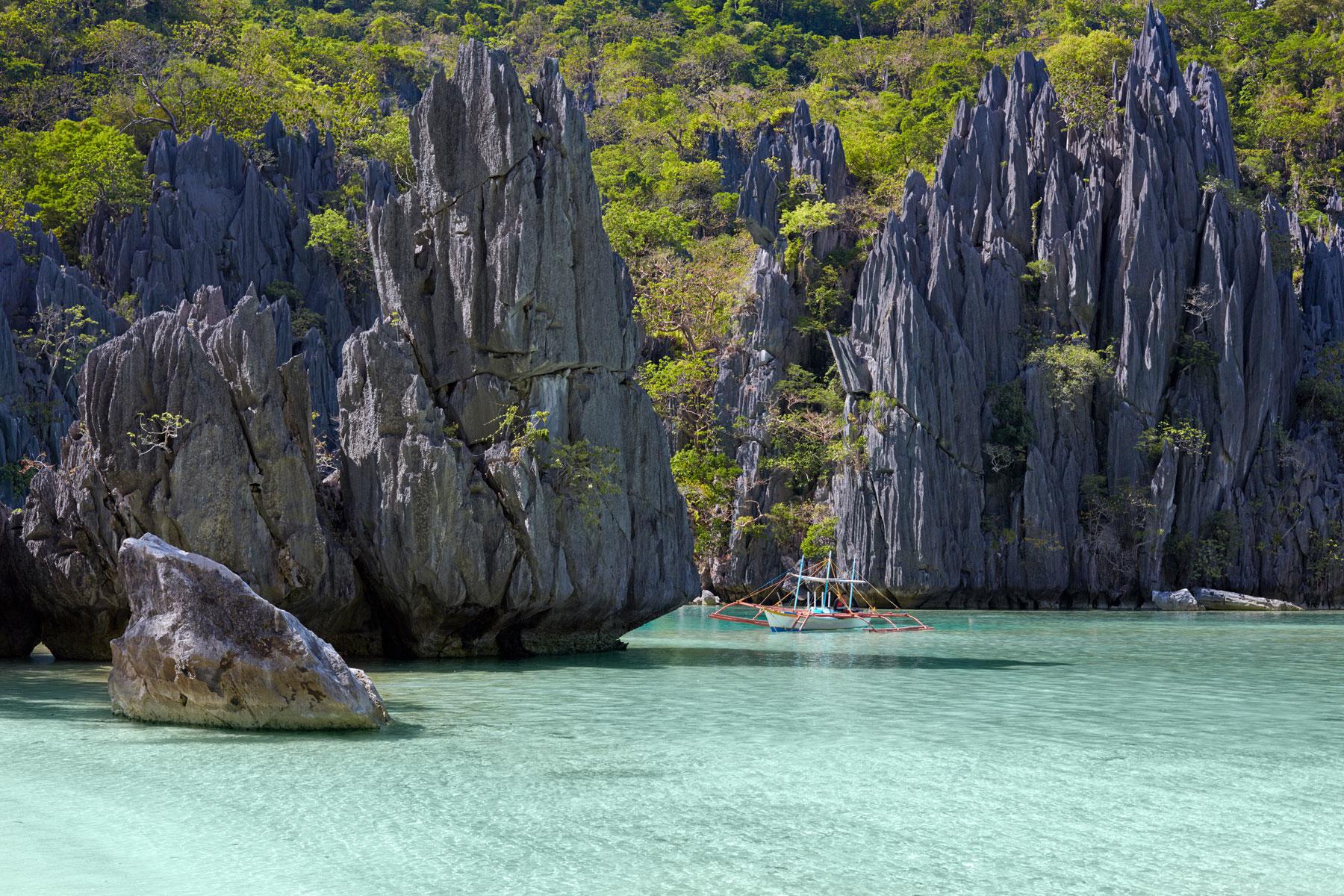 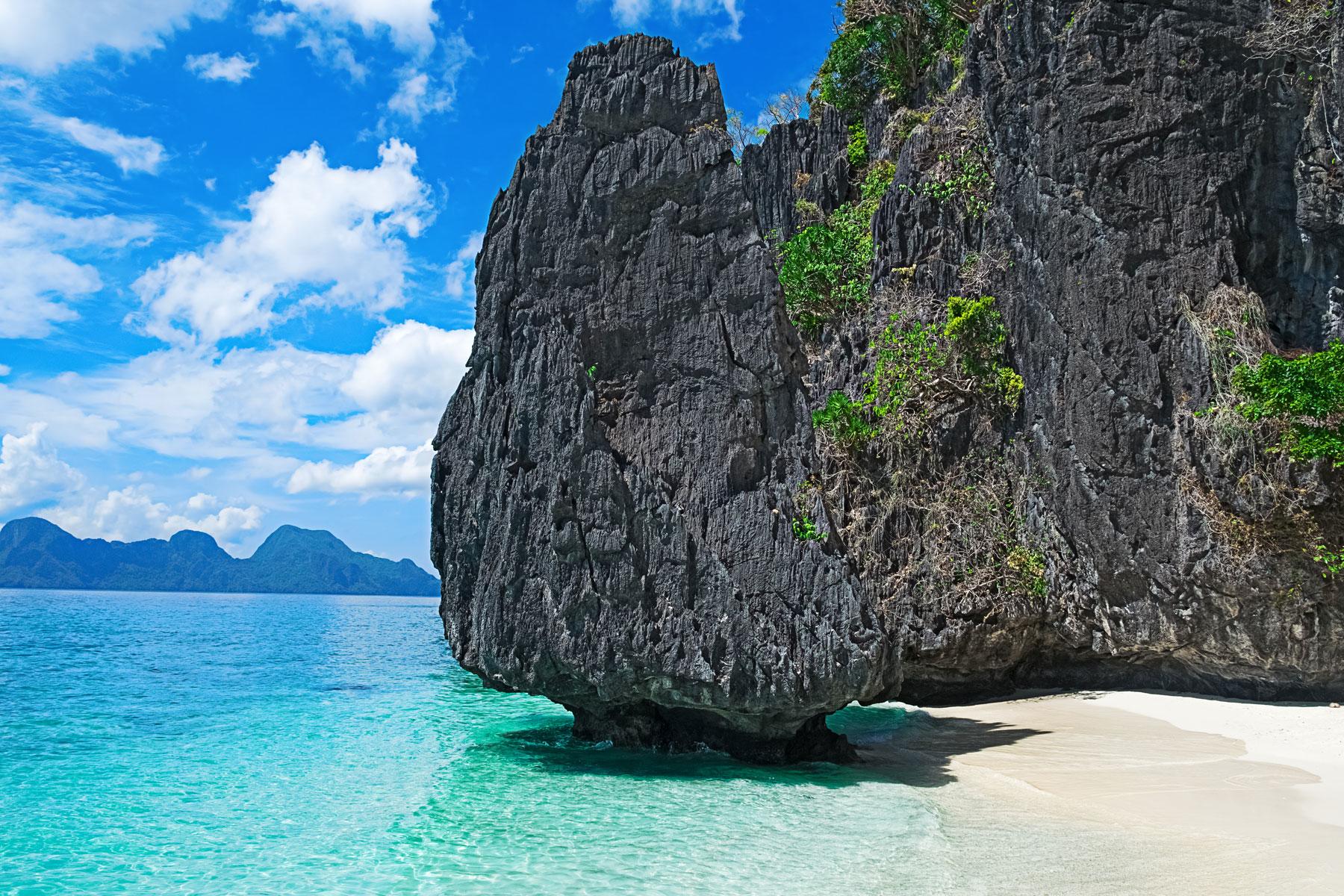 Of beauty, there was no shortage: We woke up to a crescent beach, hugged by dramatic karst rock formations towering above the water and turquoise waves lapping against the white sand.

Someone kneeled in front of me, explaining what was about to happen: There could be numbness, swelling, nausea. It’s possible I could pass out from the pain, which he said would be a “10 out of 10.”

On our second night in paradise, we wrapped up dinner and walked the 100 feet from the restaurant to the beach bar. Along the way, I felt a sudden, stabbing pain in my foot and then watched a snake-like creature writhe across the deck toward the dark forest. As pain radiated up my leg, a hotel groundskeeper sprinted onto the deck and stamped the attacker into a mushy mound. Moments later, I was surrounded by hotel staff—one was covering the wound, now blazing red, with some kind of homemade garlic remedy. Another was calling a doctor on the main island. Someone kneeled in front of me, explaining what was about to happen: There could be numbness, swelling, nausea. It’s possible I could pass out from the pain, which he said would be a “10 out of 10.” My body felt to be filling up with some kind of boiling liquid. The feeling worked its way up my stiffening leg, my torso, and finally into my neck and head.

The doctor was at least 45 minutes away. I took deep breaths and provided regular updates regarding my disappearing senses: “I’m not panicking, but my vision is getting spotty. Now I have tunnel vision.” A few minutes later: “I’m calmly telling you that I can’t see anything at all… I feel like I’m going to vomit… It’s hard to hear. There’s a high-pitched ringing.”

Then finally, a crack in the darkness. A sliver of light and it all started coming back. The warm wave descended back down my right leg to the burning foot. The doctor never came, but the hotel’s nurse assured me that, in the Philippines, centipede stings were a fact of life and I’d be just fine.

Through the night, the injured foot was impossible to touch—so sensitive that even the brush of a soft bedsheet was excruciating. It was a long night… and I had no idea that this was just the beginning.

First thing the next morning, the hotel’s nurse escorted me to the main island where we waited at a local clinic. It was hot, sticky, and crowded with young tourists. When it was finally my turn, the doctor seemed unfazed—she was evidently familiar with centipede stings and confidently prescribed antibiotics, anti-inflammatory meds, shots, and painkillers that should get me through the week. As I barraged her with questions, she replied with one- or two-word answers before moving on to the next patient.

Given the lack of medical advice, I devoured everything on the internet pertaining to tropical centipedes. We learned a lot: There are more than 3,300 centipede species in the world across five orders—all of which are poisonous to some degree, though the tiny ones don’t have enough venom to bother you. 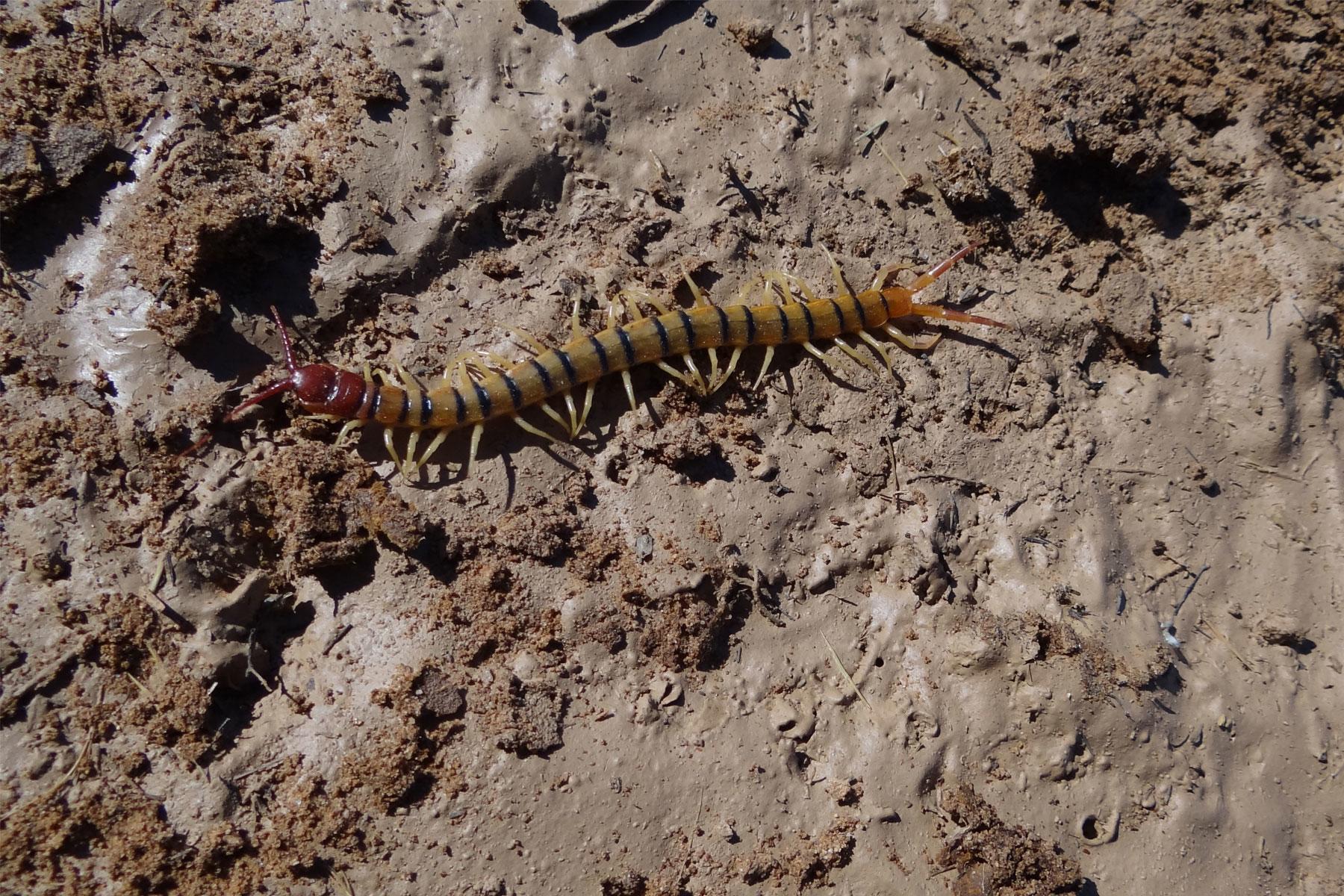 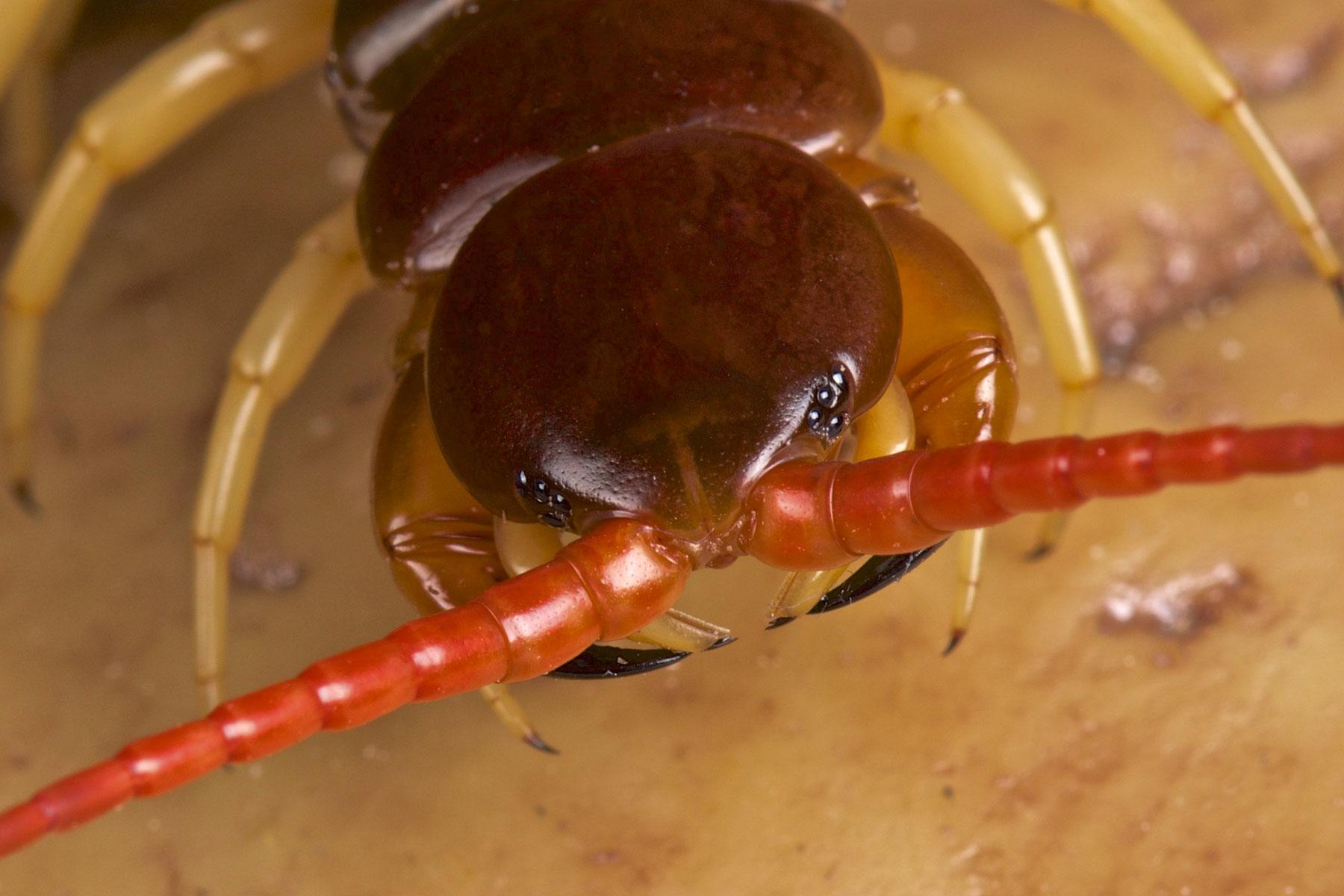 Usually responsible for human stings, the scolopendra genus has 21 scaly segments and 42 legs (not 100, as the name “centipede” would suggest), with two antennae-like rods on their heads called forcipules. Aggressive and fast, the predators use these pincers to quickly bite their prey and inject venom into the bloodstream, rendering them defenseless. They’ll eat pretty much anything that’s smaller than them. The dinner menu includes small mammals, baby birds, cockroaches, human feet… you name it.

With its dense jungles and humid climate, the Philippines is an idyllic environment for these fierce nocturnal arthropods. Known to sneak into shoes and creep around in dark corners, the centipedes tend to strike at night but are, as the hotel staff member put it, not usually deadly. According to the US National Library of Medicine National Institutes of Health, there have only been a handful of centipede-related fatalities in the world, most of which are unsubstantiated.

Back in Hong Kong, where I live, it was easy to joke about the traumatizing experience from a distance. I recounted every detail at happy hours, showing off pictures of my inflamed foot with misplaced pride. I never thought centipedes would play such a starring role in my life—but, little did I know, the saga was far from over.

Little did I know, the saga was far from over.

A few days later when I was back in Hong Kong, I woke up in the middle of the night to an itchy foot, covered in tiny little bumps. It was hot to the touch and itched so intensely that I was up all night trying to soothe my skin with numbing ice. The next morning, I visited a doctor before work and was given topical steroids to treat the rash. He thought I was experiencing an allergic reaction to an anti-itch cream. But by lunchtime, I looked down—my foot had ballooned to the size of a beach ball and turned a sickly shade of pale purple.

Suspecting an infection, I raced to the ER, where the city doctors seemed befuddled. I showed them a medical journal that my dad had found online, which traced the reports of 46 patients in Hong Kong (where the species also exists) between 2006 and 2010. According to the journal, about 10 percent of those patients (5 out of 46) experienced a relapse.

After being admitted to the hospital, the doctors administered antibiotics to treat the supposed infection, but the swelling and pain did not subside. They then asked a microbiologist (a doctor who studies microscopic organisms like fungi and bacteria) to take a look. The specialist was visibly giddy as he examined my collection of foot photos and explained that centipedes often carry a particularly flamboyant type of bacteria due to their woodland habitats.

“It’s a beautiful purple color, but it can lead to necrosis,” which he explained, would essentially cause skin tissue to rot. This, of course, would be an atypical complication, usually experienced by people who either have poor wound-healing abilities or poor blood circulation. Thankfully, the problem didn’t turn out to be an infection of any kind, but rather a delayed reaction to the venom.

After a few days of antibiotics and antihistamines, the outline of an ankle emerged and I could make out the bones in my foot again. It would take another six months to heal fully, due to blood vessels damaged by toxins in the venom, but I felt thankful: At least my skin wasn’t devoured by a beautiful flesh-eating bacteria.

When I planned our trip to the Philippines, my husband and I chose the island hotel for a reason: We wanted to explore El Nido’s remote, raw, and natural environment. But like many holidaymakers, I let my guard down, feeling safely cocooned in the comfort of a cozy beach bungalow and attentive staff.

All over the world, remote retreats promise back-to-nature experiences, but no matter how “eco-friendly” a place claims to be, it’s still encroaching on the natural habitat of its flora and fauna. I imagine the angry centipede, lashing out at enormous, ugly invaders—defending his shrinking home.

That’s not to say that to show some respect for nature, you have to get bitten by a centipede and spend two nights in the hospital. But it does serve as a reminder that we should travel with awareness—do our due diligence to understand the destination’s biodiversity, a hotel’s impact and, of course, the foreign critters with which we’ve yet to be acquainted.

I wanted an eco-fueled holiday and, by all measures, I got one—real and unfiltered. But next time I’m basking in barefoot luxury? I’ll think twice before taking my shoes off.