What do you picture when thinking about a romantic city? Bridges and weeping willows? Canals and cobbled streets? Couples walking arm in arm? You’re probably imagining Venice or Paris. But maybe you should start thinking about Kurashiki, Japan.

Just outside of Okayama, on the banks of the Seto Inland Sea, in the region of Setouchi, the city of Kurashiki is vast and modern—and home to almost half a million. But wander into the Bikan historical district, in the city’s throbbing heart, and you’ll be swept off your feet as if by swooning cherubs. This is a land made for those ready to fall headfirst in love.

The central canal is an off-shoot of the Kurashiki River, which flows from Lake Kojima, itself an inlet of the Seto Inland Sea. Yes, geography may sound neither interesting nor romantic, but it’s important.  Its unique position transformed Kurashiki into a city of warehouses—the city’s name actually translates to “Warehouse Village”—all to store rice and sake and cotton, all of which were held here, waiting to head east to other, more important towns throughout Edo-era Japan. And though a warehouse town may have your hipster senses tingling, this isn’t Dumbo or the Arts District, folks. These structures are not corrugated metal and brick. Rather, these two-century-old stunners sparkle in pristine black and white.

When strolling through these streets—preferably hand-in-hand with your sweetheart—you’ll feel as though you’ve crossed into a black-and-white universe: an old film, an ancient photograph, a drawing by a colorblind artist. But, then comes a pop of color. Green weeping willows line the banks of the central canal and boats captained by red-jacketed oarsmen float upon it. And, in the evenings, when eyes are most often twinkling and hearts most frequently fluttering, the street lamps shine and their yellow lights cast a glow upon these beautiful old buildings. Suddenly, the world is sepia. 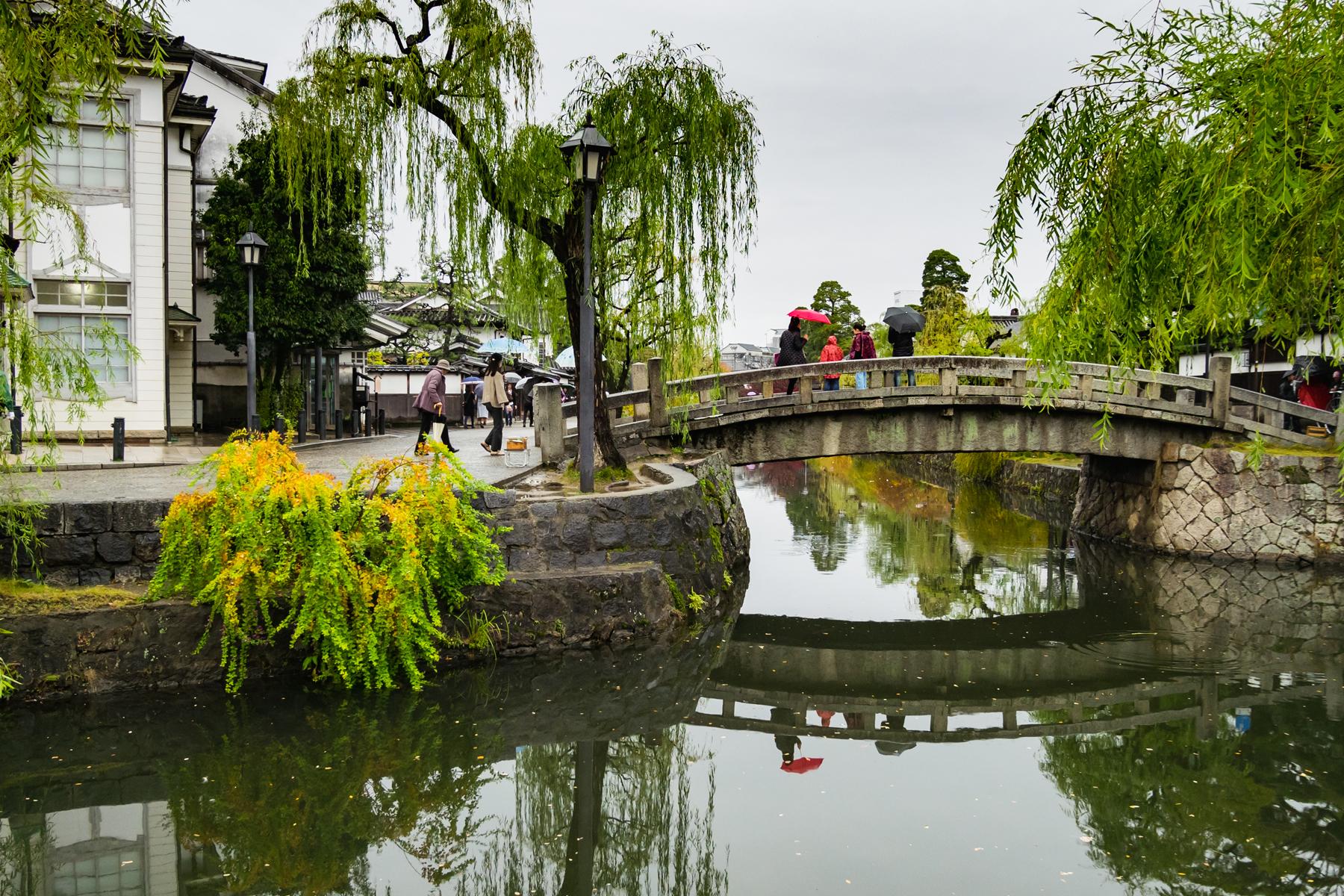 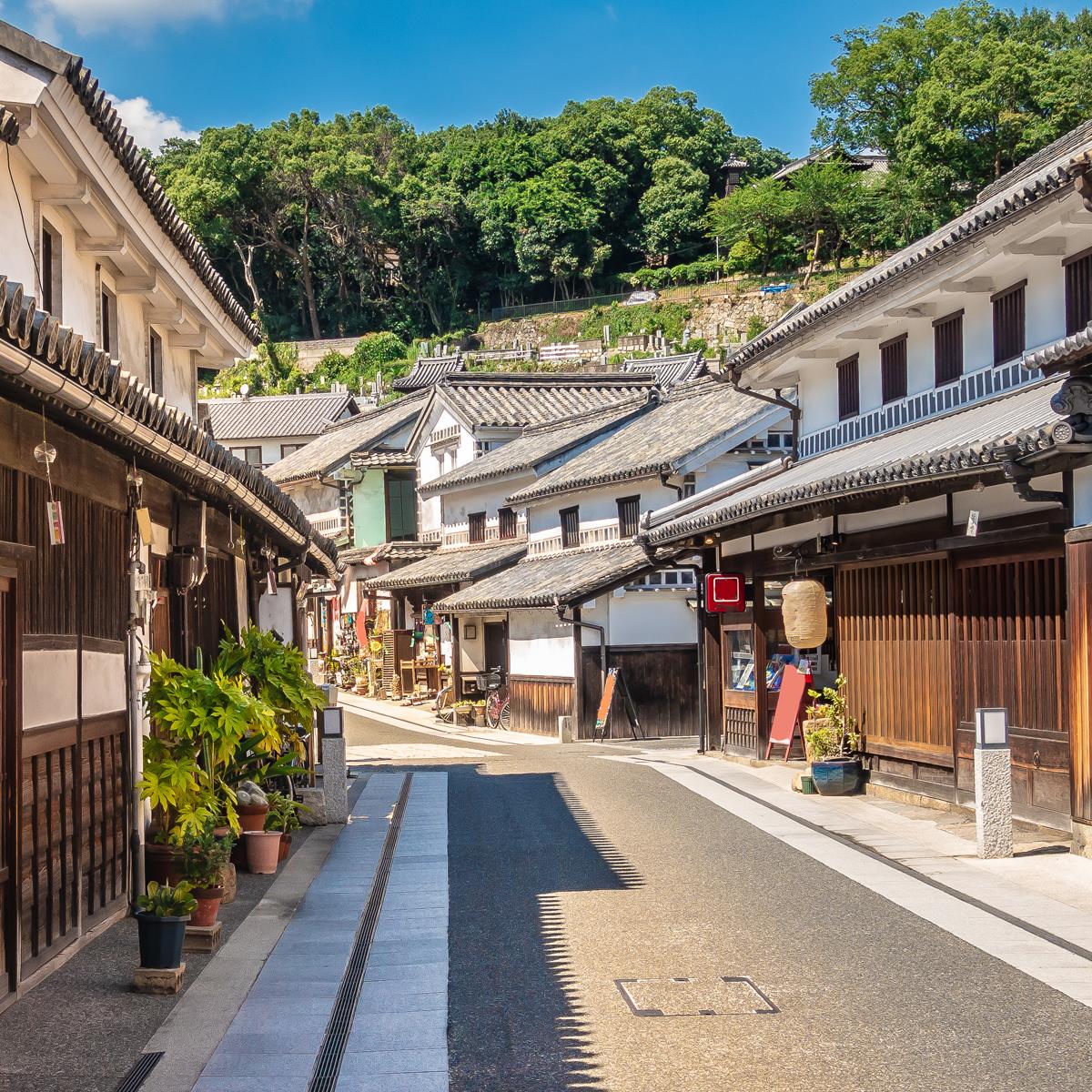 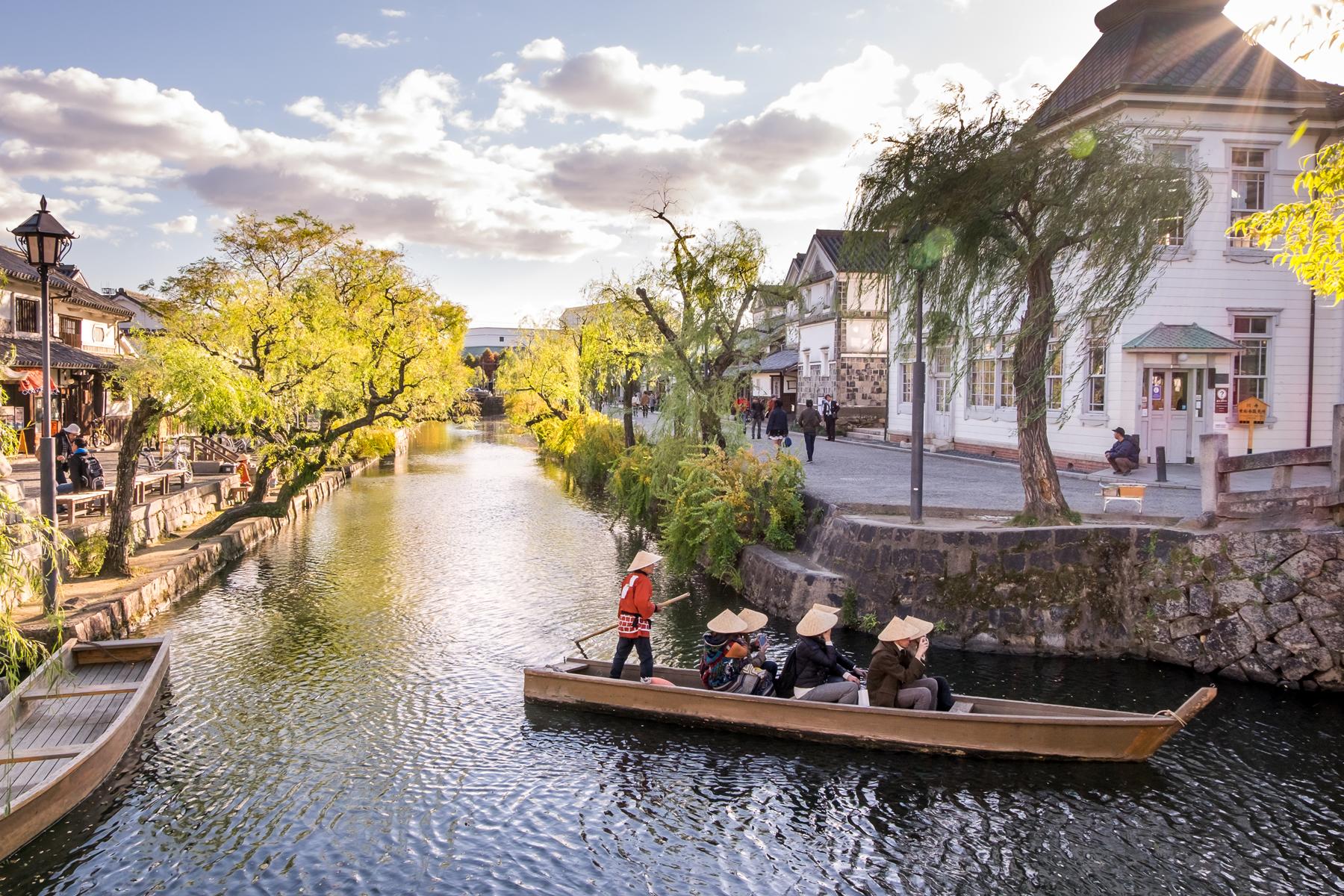 But in the daylight, wander and explore the various shops on the main drags. Note, however, that these streets remain nameless, so it can be quite confusing—not quite Venice-confusing, but still quite confusing. Pick up a beret (how romantic!) at Chapeaugraphy;  sample the most sensuous ingredients (how aphrodisiacal) at the grocer Heisuiken—we’re talking urchins and oysters and sake; or make your self look great (how sexy!) with Japanese denim at Kojima Market Place (Kojima, a city famous for denim—and so denim-obsessed that there’s literally a street called Jeans Street—is only a 25-minute drive outside of the Bikan District).

And in the night, before supper or even after, just before retiring to bed, a drink is in order. It’s hard to find a drink here after hours—the streets have emptied and now it’s just you, your sweetheart, and the lamplight. But, down a very narrow alley on the eastern side of the canal, through a courtyard, there’s the light of Salon de Ric’s. It’s quiet here, but scattered about are locals and those who have taken temporary residence. The cocktails are perfectly mixed, the music subdued, and the environment so peaceful that you’ll want to extend your evening into the wee morning hours—or immediately rush back to your hotel and start smooching.

What on this beautiful world is more romantic than the water lilies of Monet or the dancers of Degas? How about the works of Picasso, Pissarro, Manet, Gauguin, Toulouse-Lautrec, Modigliani, Pollack, and Kandinsky? Well, you can find them all at Kurashiki’s very own Ohara Museum. It’s a smorgasbord of 20th-century western art with a smattering of the 16th (there’s an El Greco) and the 19th (there are three by Rodin). They’re all housed just off the canal, inside a building with a classic Greek façade, buttressed by two Ionic columns.

But, you’re probably thinking, why? Why is all this here? Well, it’s because of Magosaburo Ohara. While making his fortune in textiles and chemicals, Ohara was also an avid collector of Japanese art. He soon took a keen interest in Western art thanks to his dear friend, Torajiro Kojima, a painter in the European style. In 1908, Ohara shipped Kojima off to Europe to study and, more importantly, use his eye to buy up great works, often from the artists themselves, including Monet and Matisse. So impressed by Kojima’s bounty, Ohara financed another two trips. Kojima died in 1929 and to honor him, to showcase his work and those he procured, Ohara built his museum.

But, this is more than just a house of beauty, the museum may have played a crucial role in Kurashiki’s survival. During the Allied air raids of 1945, surrounding cities were heavily bombed including Okayama and, most infamously and devastatingly, Hiroshima. And, yet Kurashiki—which had many factories, warehouses, and plants—had been spared. Though it’s never been proven, the most common theory is that the Allies sought to spare the Ohara Museum. The art was just too culturally important to destroy. And what’s more romantic than art saving a town?

A city can only be as romantic as its lodgings. After all, what’s Venice without the likes of the Gritti or Paris without that of the Ritz? And here you have the Ryokan Kurashiki.

Ryokans are traditional Japanese inns, but this one provides all the trappings of tradition—tatami mat floors and sliding doors—paired with some more modern touches—an exquisitely comfortable raised bed and ample Wi-Fi. The buildings that make up the complex range in age—from a 150-year-old sugar warehouse to a 260-year-old granary—and have been lovingly converted to this oh-so-peaceful hotel.

When arriving, you’ll walk into a gorgeously sparse lobby with stone furniture, a single bell, and a ticking clock that’ll have you wondering if you’d just walked through a door and into the 19th century. A woman in traditional garb and sandals will take your luggage and escort you down a hall, past a Shinto shrine, and into a warm reception room where you’re given tea. From there, it’s to the room—there are only eight—where you’ll remove your shoes in your foyer, slip on your slippies, and prepare to luxuriate. 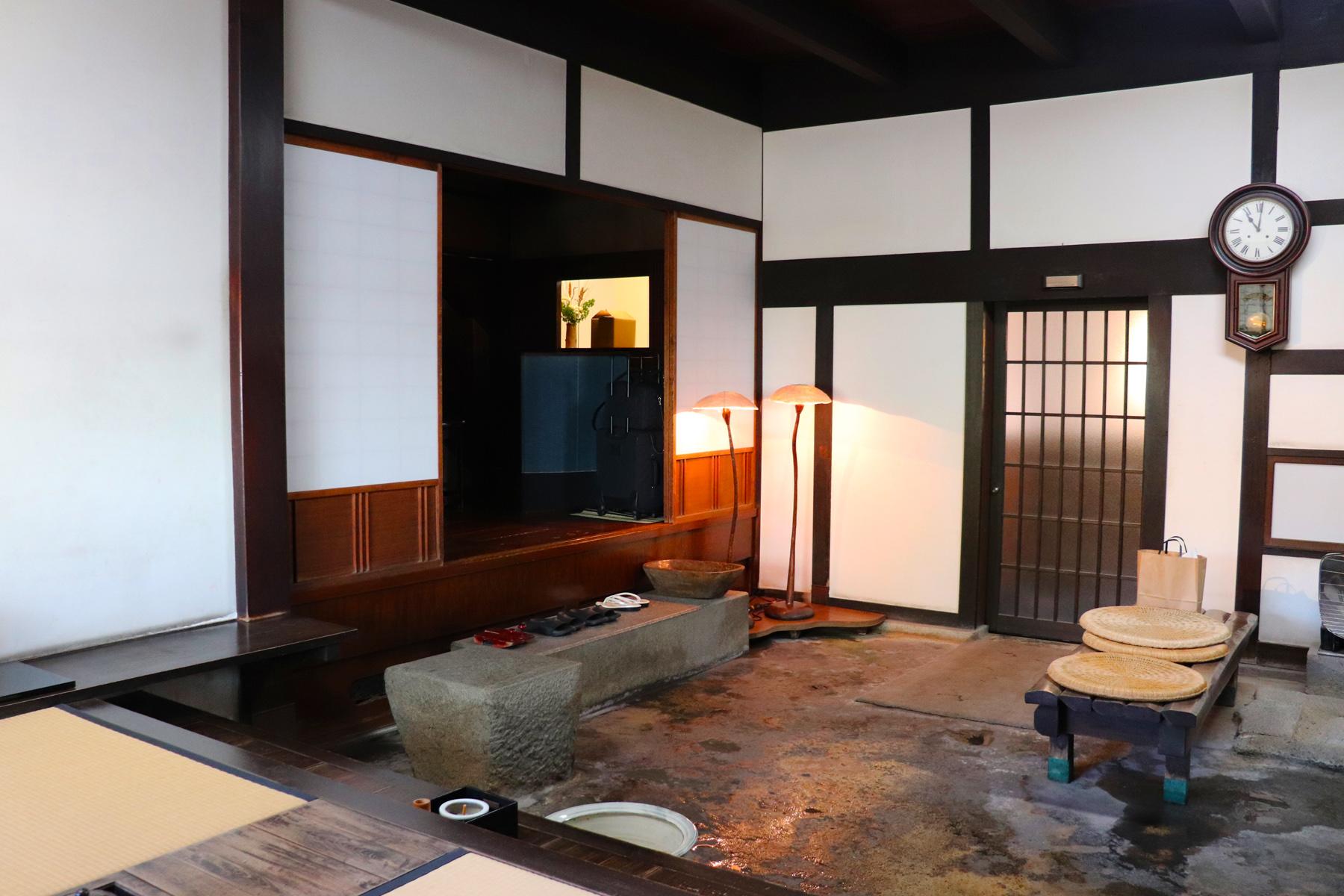 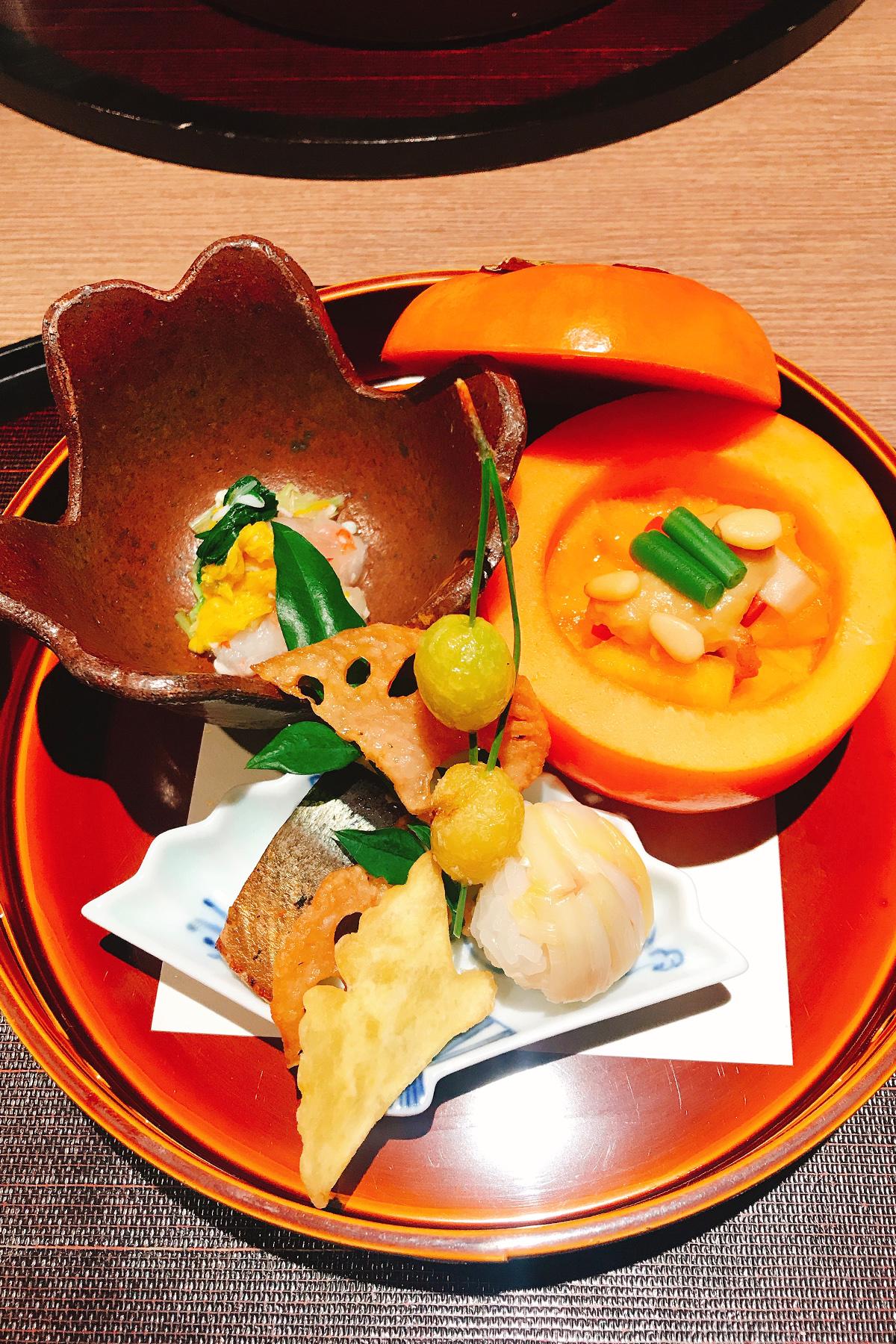 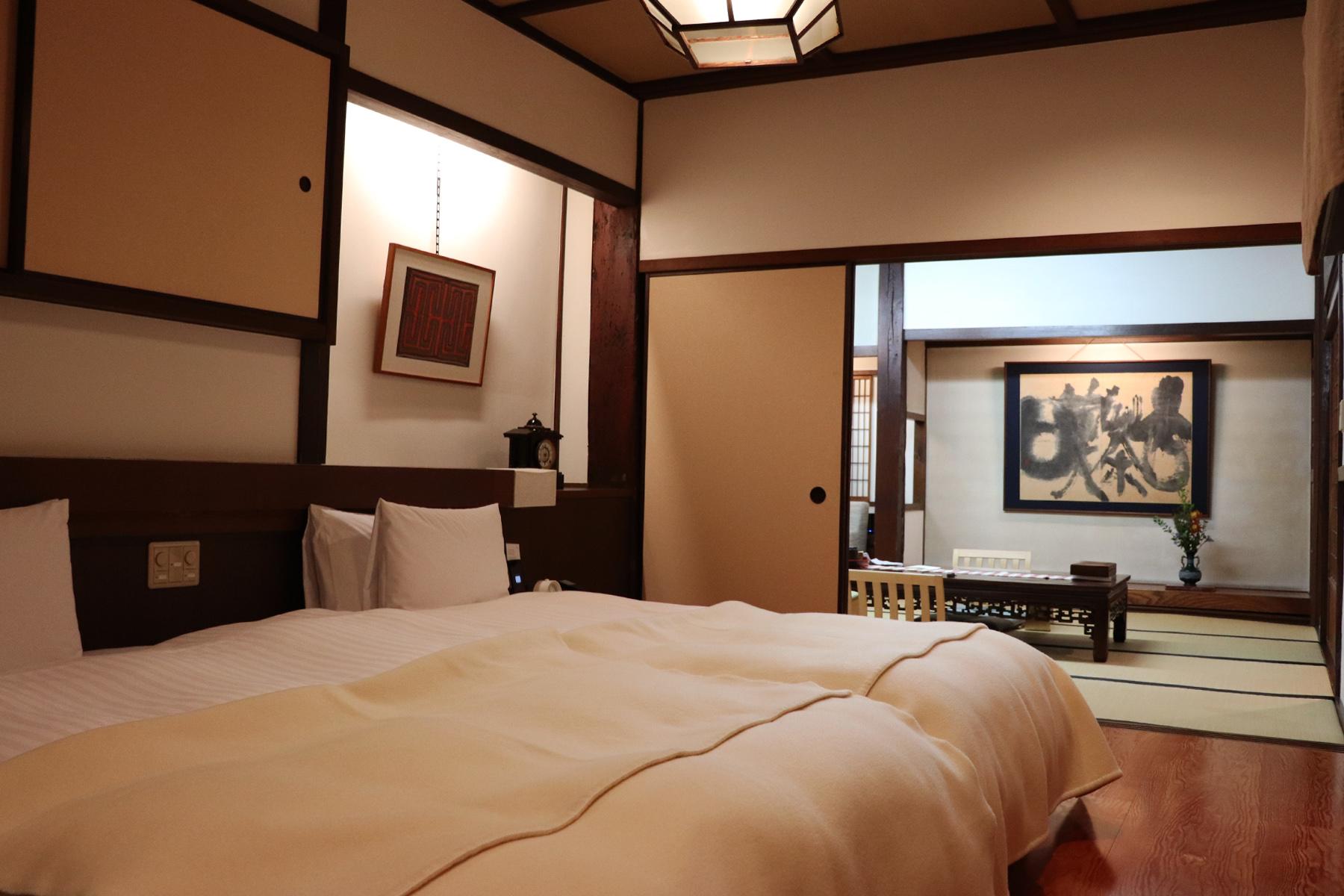 It’s perfectly acceptable to wander throughout the hotel in nothing but a robe and slippers (and, preferably, your undergarments)—and, honestly, lean into that temptation. There’s a private bath where couples can take a dip together—so for those of you who have wanted to enjoy an onsen with your partner, but couldn’t because of a separation of sexes, well here’s your chance to lounge with the one you love.

But, as anyone who’s ever been in love knows, it’s hard to sustain romance infinitely—love sticks around, but romance comes and goes. But, still, it’s always good to seek it out—at home or all over this swoon-worthy world. And when you find it—and you almost certainly will here—savor it with someone you love.