It takes 45 minutes to go from weeping to childlike joy.

The Hiroshima Peace Memorial Park and the area surrounding it are sacred ground. It was here in 1945 that the first atomic bomb fell, killing 135,000—many of them (between 60,000 and 80,000) instantly, while the rest suffered for weeks, months, or years before ultimately succumbing to the pains of radiation poisoning.

Now what remains is a haunting testimonial to the absolute horrors of this world and the hopefulness that one day we, as a society, will rid ourselves of cruelties and follow our better angels. It’s impossible to stare at the wreckage of the Atomic Bomb Dome or to wander the artifacts left in violent shambles at the Memorial Museum without a pit in the stomach, a knot in the throat, and a tear in the eye. Spread throughout the Memorial Park are also reminders of human kindness and a determination to strive for peace, embodied in the statue of a little girl named Sadako Sasaki at the Children’s Peace Monument.

Sadako was two when the bomb struck. She survived, but a decade later was diagnosed with leukemia caused by the radiation. During her time in the hospital, she was taught the legend of the paper cranes—anyone who folds 1,000 will be granted a wish. So, Sadako began folding. Her wish was simple—she wanted to live. But, she died in October of 1955. Her friends raised money to honor her, and all those who suffered like her, with her statue. Engraved at the foot of the memorial read the words, “This is our cry. This is our prayer. Peace in the world.” 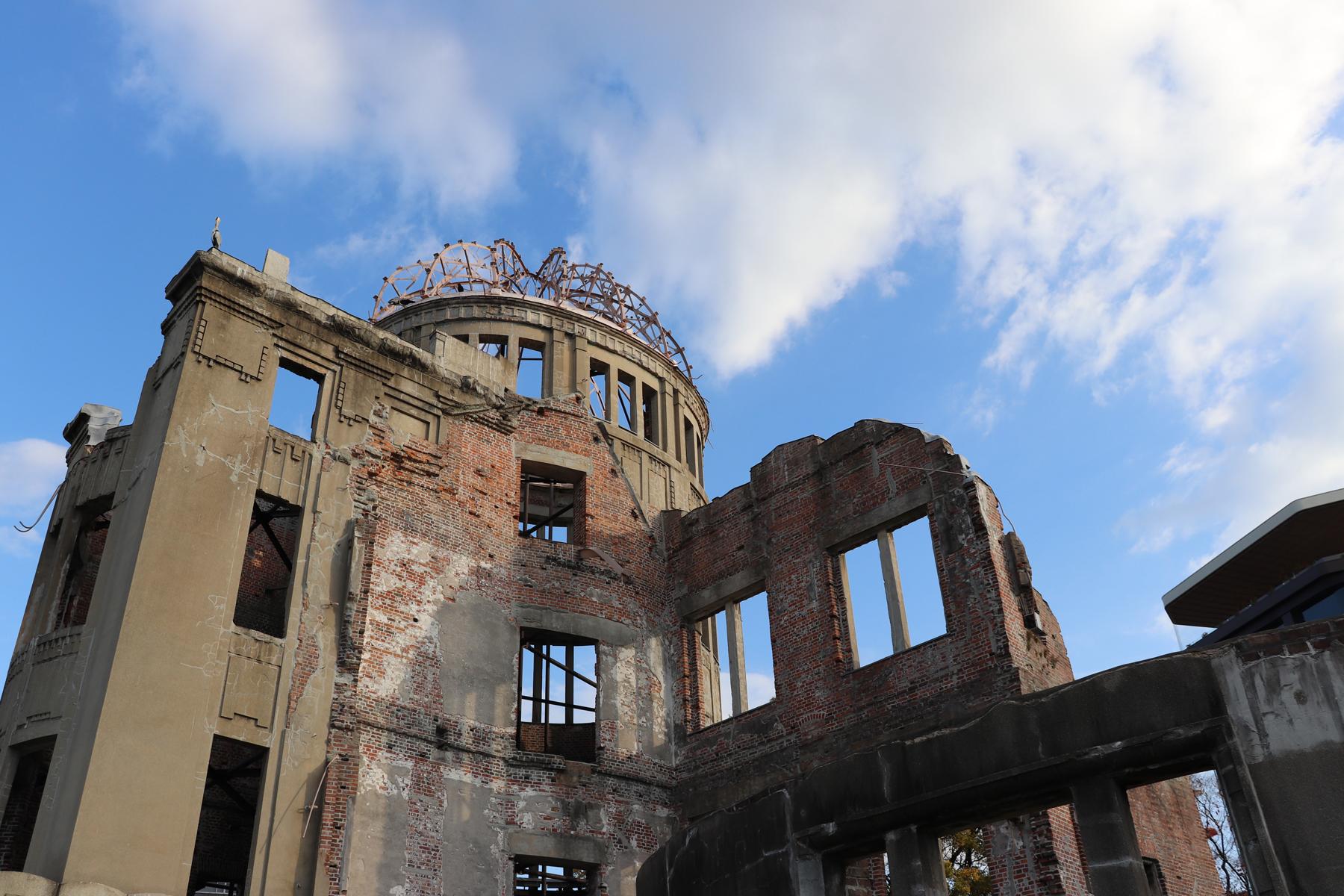 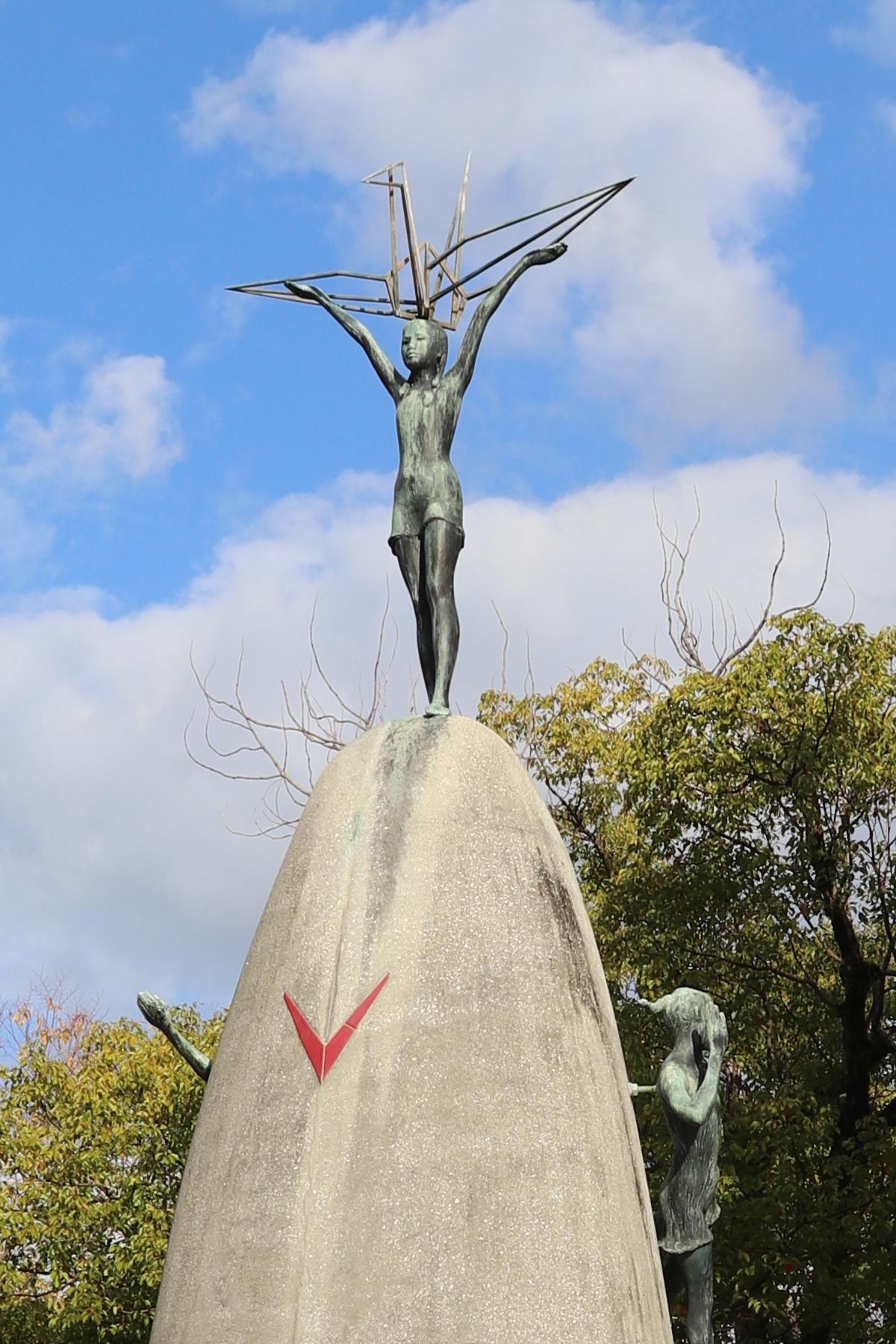 Altogether, Hiroshima evokes an overwhelming paradoxical grip on the mind that simultaneously causes a complete loss of faith and a renewed hopefulness that one day everything might just be alright.

And that’s why after your visit, it’s imperative that you immediately go to the Motoyasubashi Pier adjacent to the park, pay 2,000 yen for a ticket aboard the Aqua Net Ferry, and take the 45-minute journey toward the Seto Inland Sea for an antidote to existential dread: Miyajima Island.

INSIDER TIPShould you want a tour guide, I highly recommend Mie Tokunaga. She has a vast knowledge of Hiroshima City and Miyajima Island and is a fantastic person to walk you through the complex history of the area.

Ah, Miyajima Island, where as soon as you step off the dock, you will see this:

Yes, deer. They’re everywhere. They walk the streets like happy dogs, ignoring the throngs of tourists who surround them. It is impossible—absolutely unfathomably impossible—for anyone to avoid smiling. Even those heavy with the weight of history on their hearts will not be able to resist smiling. 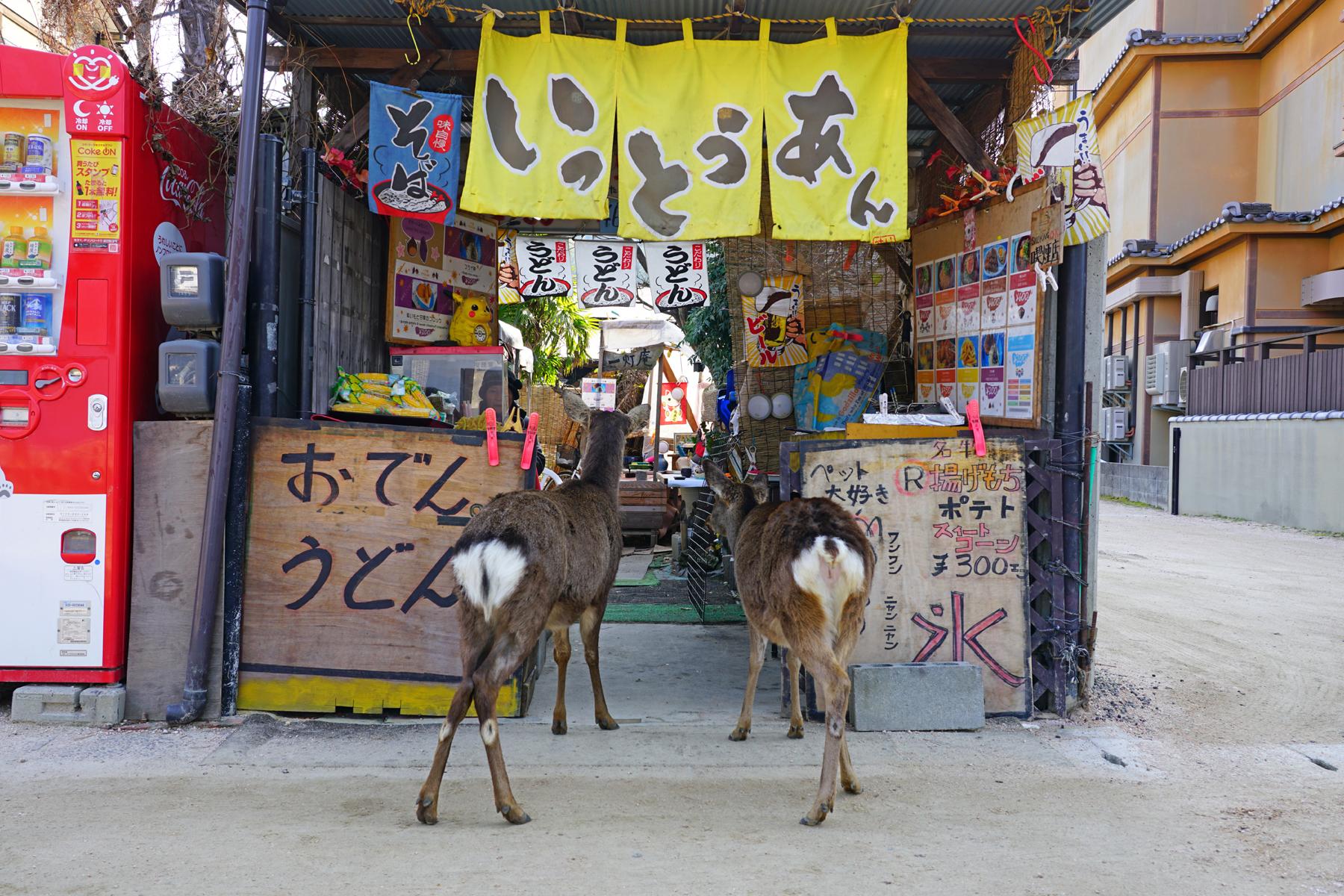 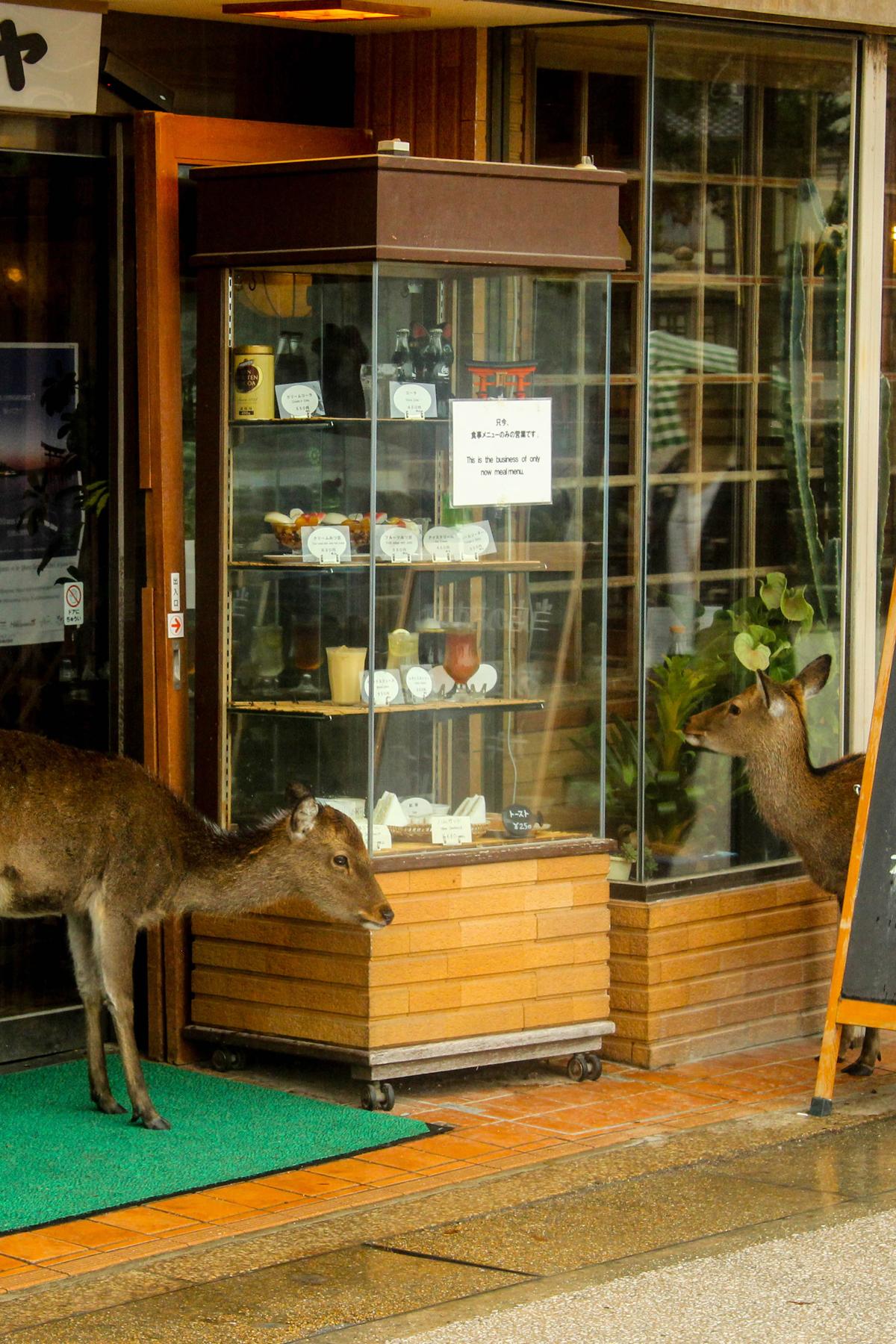 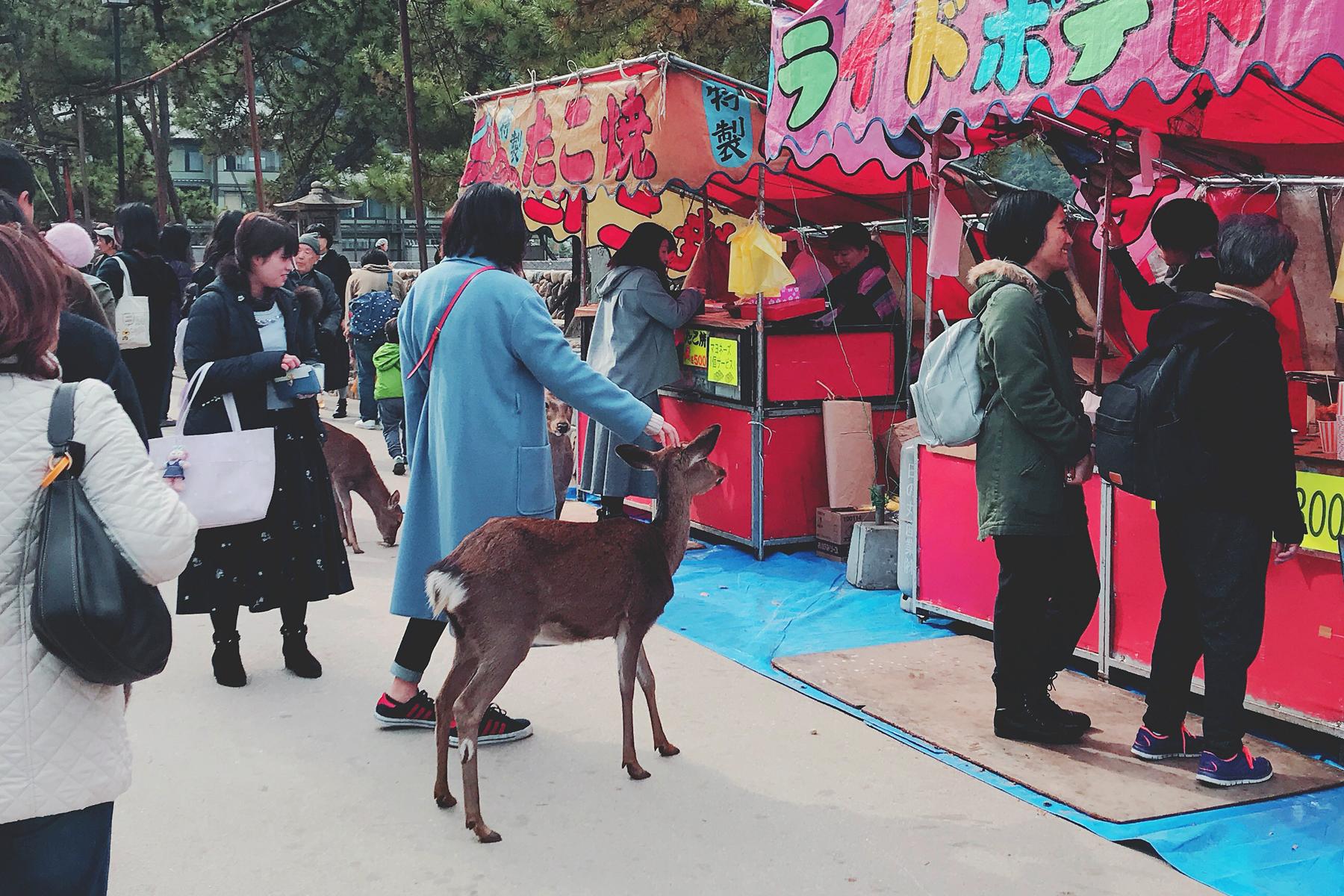 There are more than 500 deer and by all accounts and records, they’ve been strolling this island for 800 years. And in all that time, they’ve been protected from hunting and instead viewed as shinroku—which literally means “holy deer.” But that’s because this is also an island populated almost entirely by the spiritual class.

The 12-square-mile island itself looks like a floating mountain range. And these mountains have long lured those seeking the divine. In fact, from certain angles, the peaks and valleys flow together to conjure the face of a man—a mountain-sized god, perhaps—lying down.

Shinto worshippers established the first shrine on the island in 593 and erected the first temple in 803. In the millennium and a half that followed, religious halls were painstakingly constructed and occasionally destroyed by fires or typhoons. Now, there are two temples—Daiganji and Daishoin—and six shrines—most famously, the Itsukushima shrine, which stands magnificently upon stilts over the softly undulating ocean below. There’s an inherent peacefulness that cradles these structures—one that wraps you up, swaddling you like baby, making you forget anything that ails you.

Farther out, in the middle of the sea, is the Torii gate, tinged in a burnt orange paint that’s been faded by the sun and surf. The gate rises from the Inland Sea. It appears stuck, as if it lives neither above in the sky nor below in the shallows. Boats row between its breathtaking pillars. But, wait! The tide recedes and suddenly the ocean pulls away from the Itsukushima shrine, pulls away to reveal a beach, a beach that extends all the way to the Torii gate. 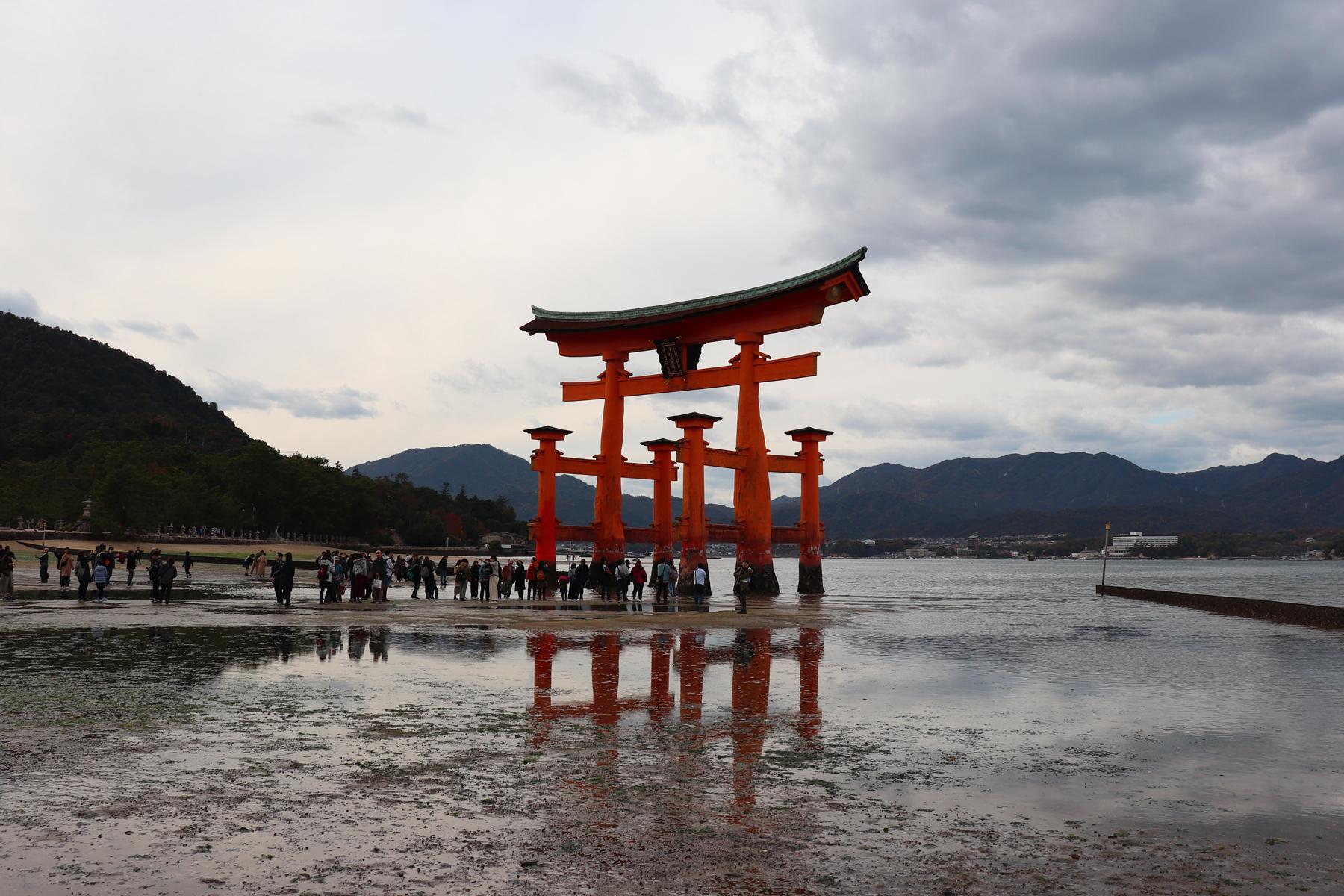 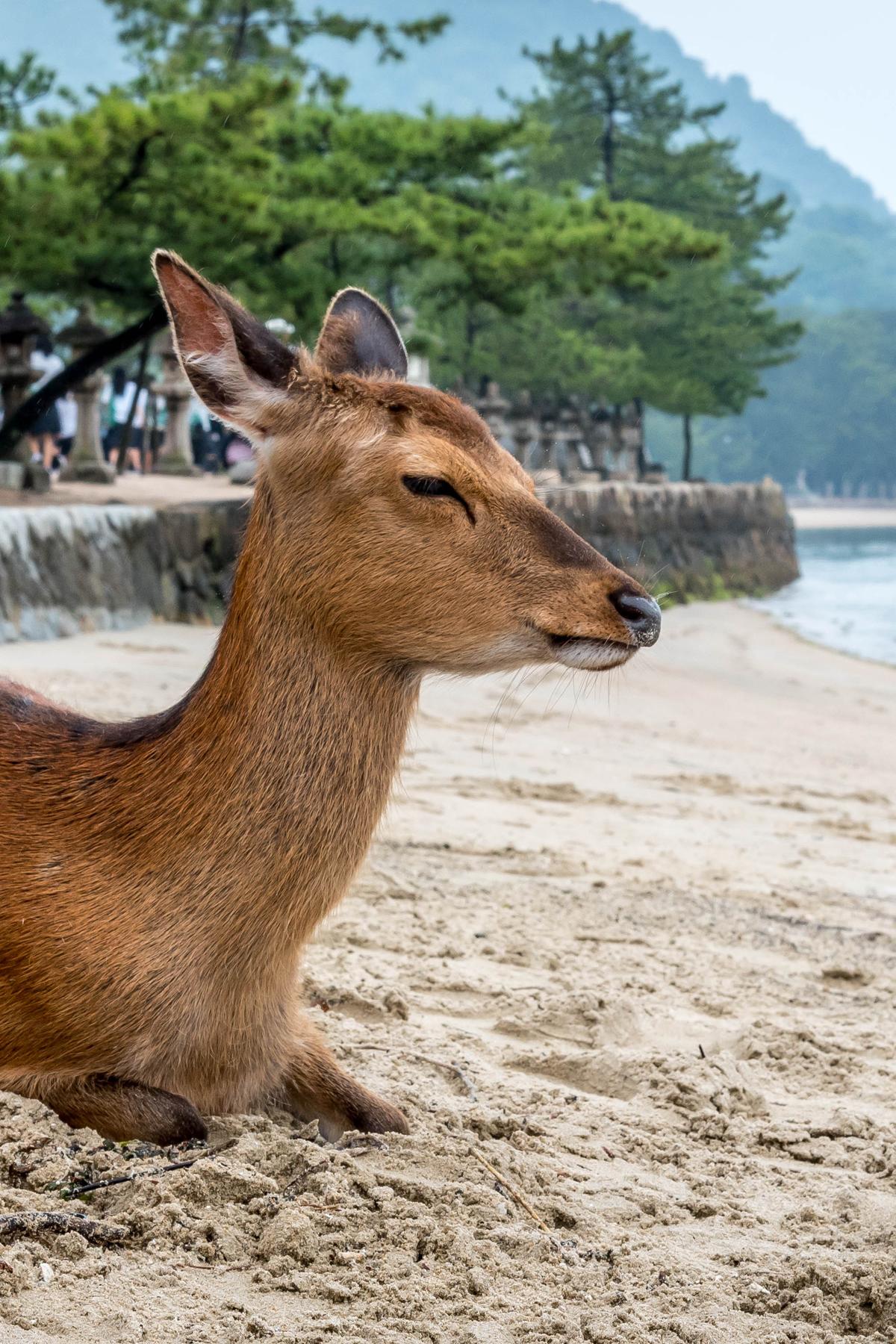 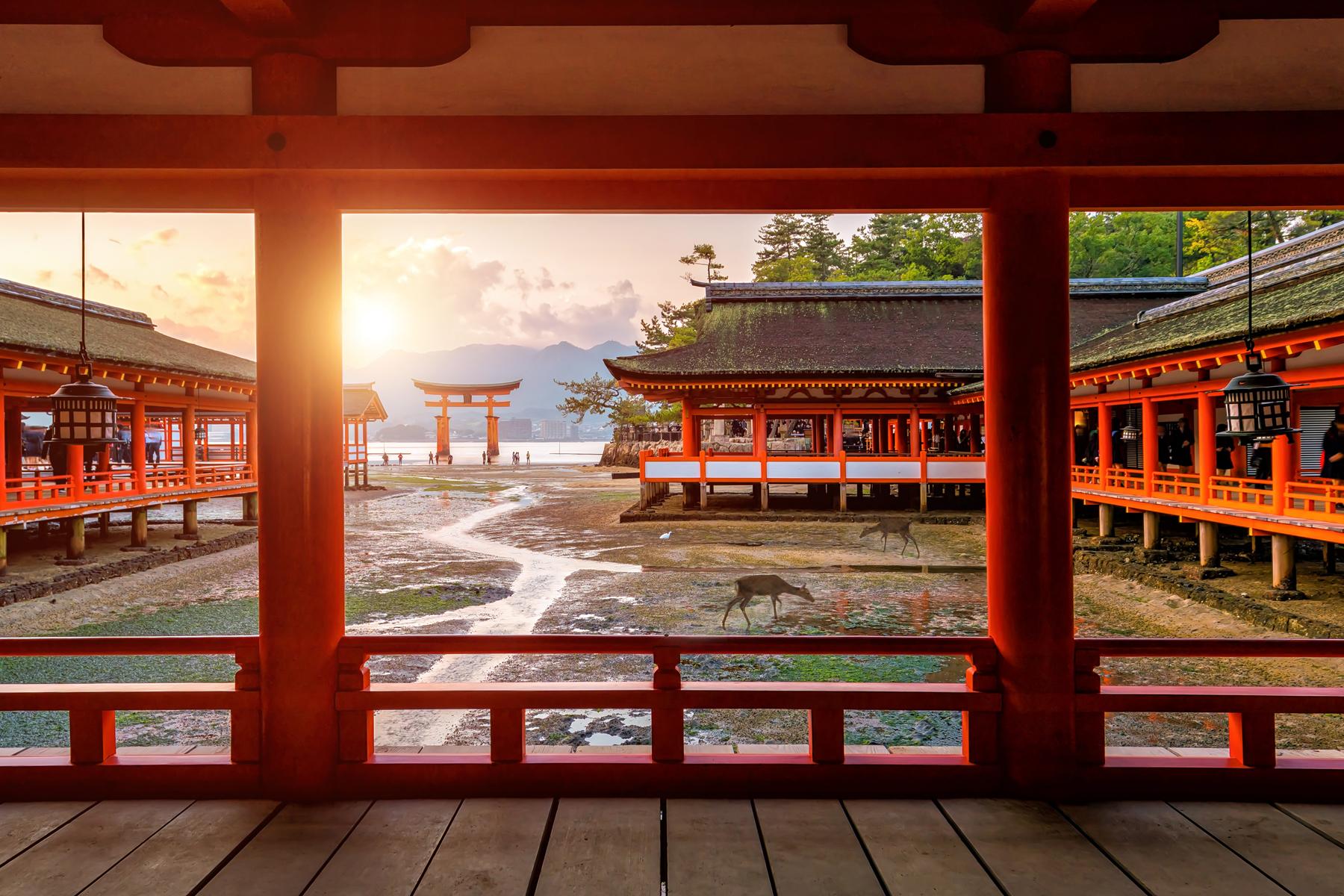 Now, everyone can gather around the Torii gate—it’s practically a kumbaya moment. Where once there was ocean, where once only boats could swim, now your feet can walk over the wet sand. No matter what ailments or pains or horrors or monstrosities exist in this world, while here on this beach, with deer prancing around you and an ancient sea gate at your fingertips, the mind can go quiet and shut it all out. And, there’s really no choice, none whatsoever, but to smile.