Many believe that, for thousands of years, Japan has been plagued by vengeful ghosts.

The mightier they were while alive—samurais, lords, and politicians—the more power they have to cause chaos from the grave. Having been wronged during life, these spirits return from the dead to seek retribution by cursing people, things, or even whole cities like Tokyo, according to Japanese mythology.

Some Japanese people blame these “onryo” (malevolent ghosts) for causing catastrophes, from natural disasters to economic collapses, unexplained deaths, and even the postponement of the 2020 Tokyo Olympics. The only way to contain these ghosts and their endless reprisals is by trapping them in architectural nets.

Japan has long been so spooked by onryo that it’s built some cities in specific formations to contain these ghosts. But as these metropolises have grown, new construction projects have torn some of these nets. Onryo have escaped.

Tokyo is still trying to limit the damage caused by the most malicious ghost ever to haunt the city. His name is Tairo no Masakado. This 1,000-year-old samurai was a rebel leader who challenged a Japanese emperor, resulting in him being decapitated by imperial forces, according to Princeton University East Asian Studies Professor Thomas Conlan.

Conlan said Masakado was one of Japan’s most famous onryo. Many Japanese people believed these spirits could “wreak havoc.” As a result, throughout the country, great efforts were made to pacify onryo like Masakado and Oiwa, a Japanese woman who was betrayed by her warrior husband and whose ghost now stalks Tokyo. Conlan said it was considered particularly important not to upset onryo tombs.

This explains why Masakado’s grave occupies some of the most valuable real estate in the world. When I visited this location before the pandemic, I was surprised the headless samurai was the sole occupier of a spacious plot of land flanked by Japan’s Imperial Palace in Tokyo’s famously-expensive financial district.

Since the 13th century, a long sequence of strange disasters—fires, building collapses, lightning strikes, deadly accidents—have occurred on or adjacent to this grave. As a result, it is visited daily by Japanese office workers who ask Masakado for his mercy. The postponement of the 2020 Olympics is this samurai’s latest curse, so the legend goes.

Conlan says Japanese authorities have long tried to contain onryo by using the concept of geomancy, in which certain geographical directions are considered lucky or unlucky. “Onryo need to be constrained, or contained by nearby religious institutions,” Conlan said. “Spirits of the wronged could be contained with the construction of nearby shrines and temples and the performance of pacification rites.”

In the centuries after Masakado’s death, for example, Tokyo officials attempted to quell his deadly influence by surrounding his grave with precisely-positioned shrines. This represented an architectural net. 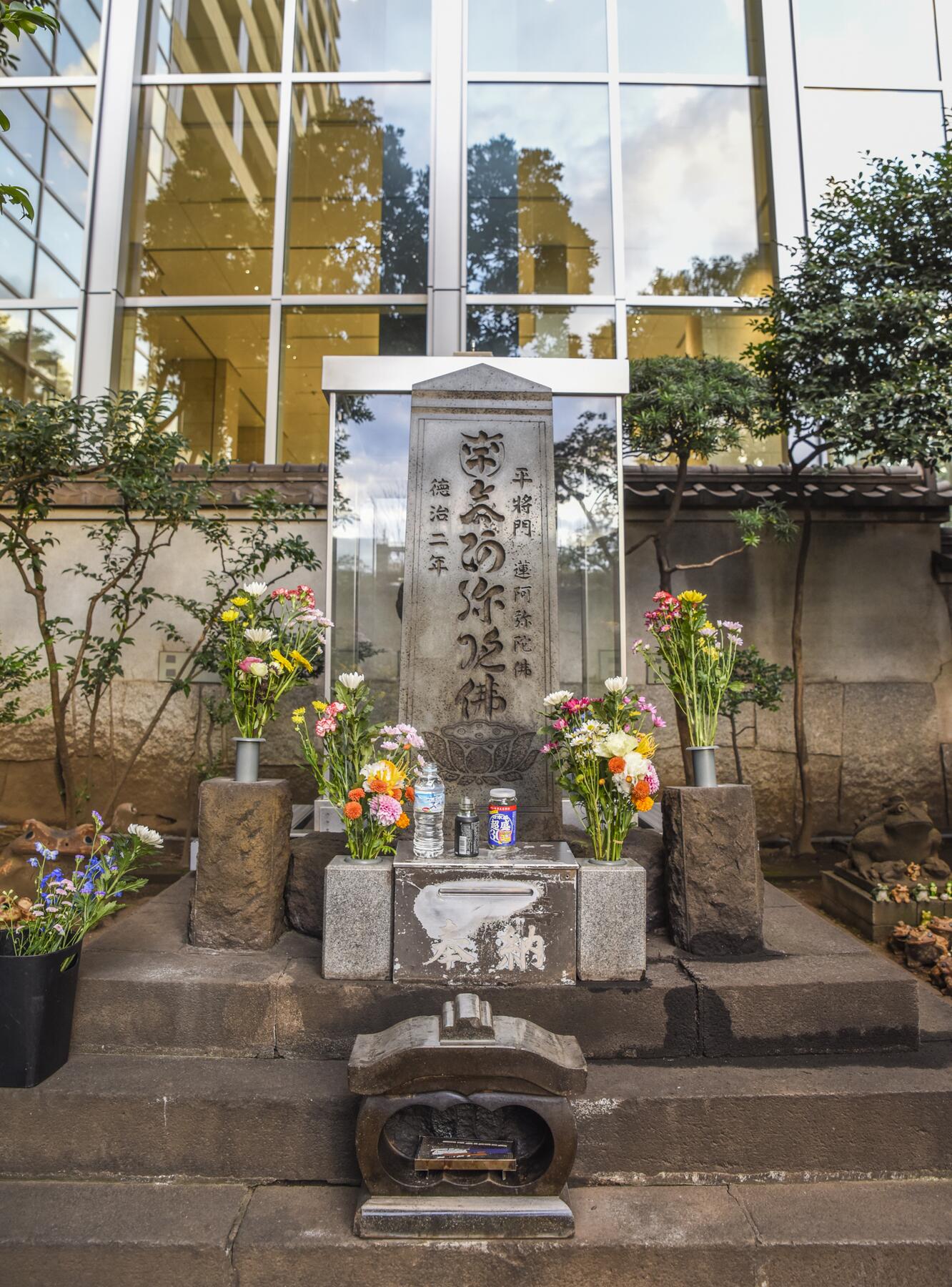 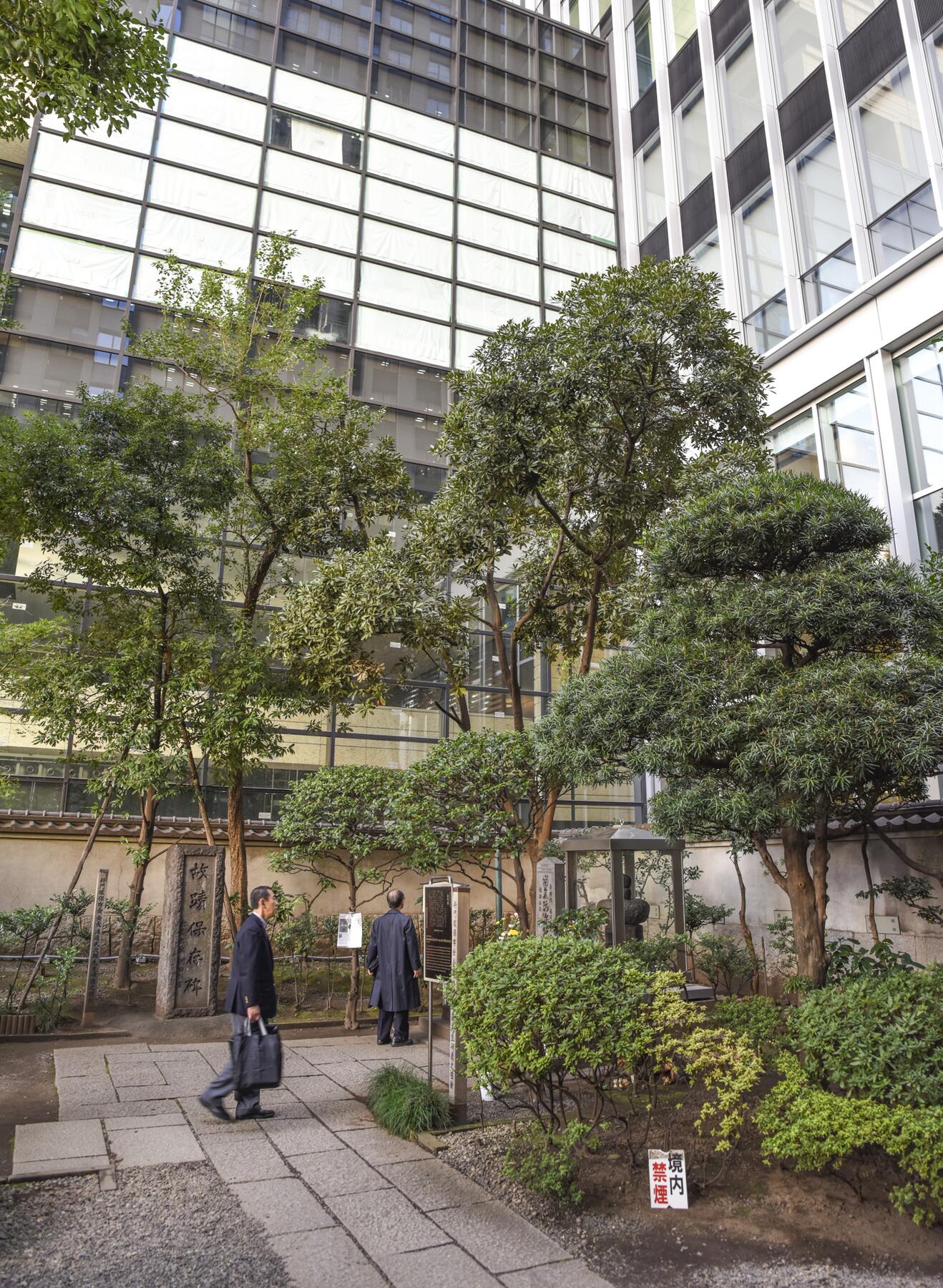 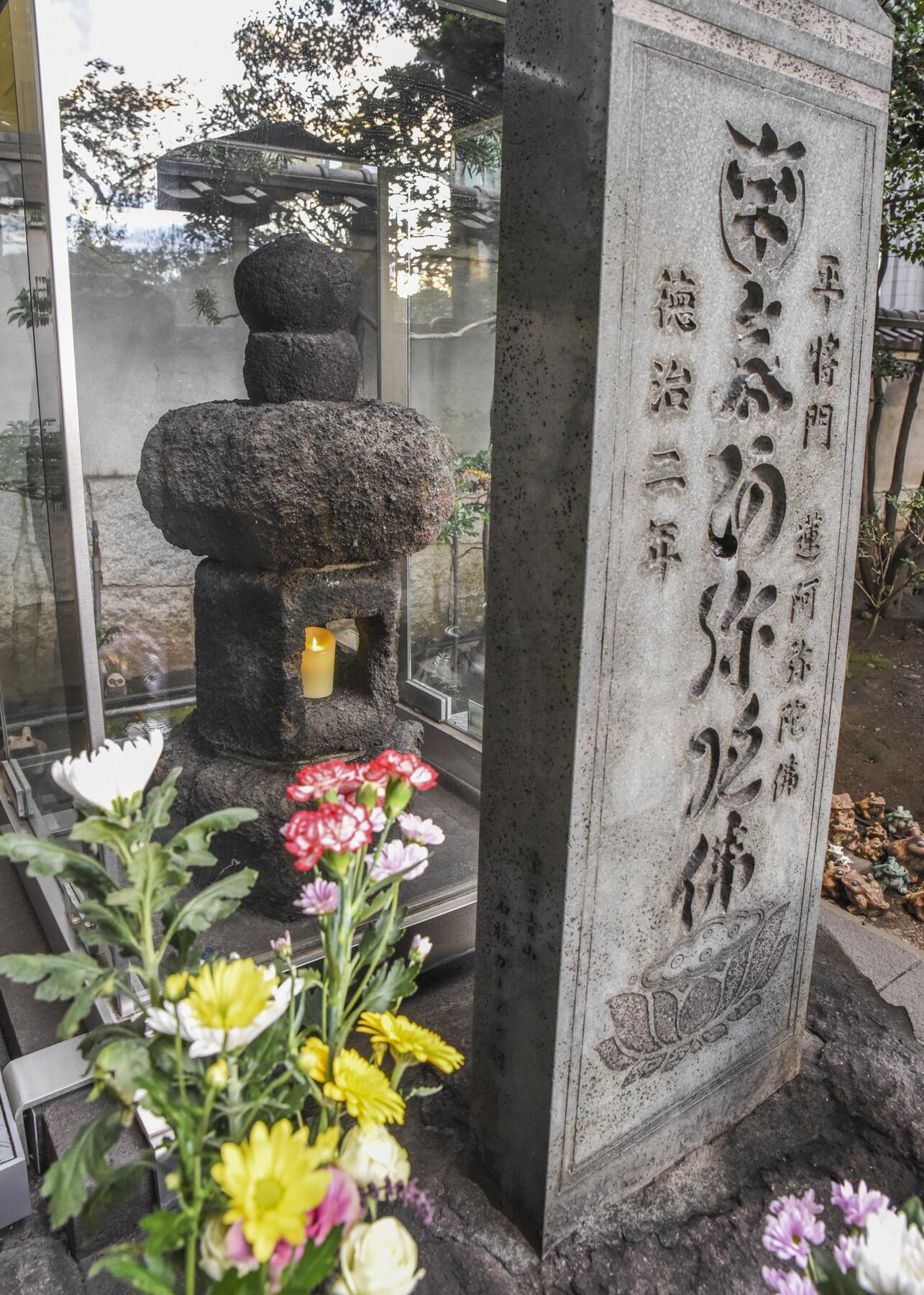 Masakado’s grave, near the Imperial Palace in Tokyo.

Key among these sites is Kanda Myojin Shrine—now a popular tourist attraction near Tokyo’s renowned electronics precinct Akihabara—which was Masakado’s original burial place before the shrine was moved. Similarly important to containing the samurai are Yoroi Shrine, where his armor’s believed to have been buried, and Mizu Inari Shrine, which was dedicated to the commander who killed Masakado.

Now, however, there is a common belief in Japan that construction projects have ruptured this ghost net, Conlan said. While Tokyo’s sophisticated public transport system is admired across the world, it may have helped to free Masakado’s enraged spirit. Shortly after the city’s Yamanote train line was completed in 1923, Tokyo was in ruins. 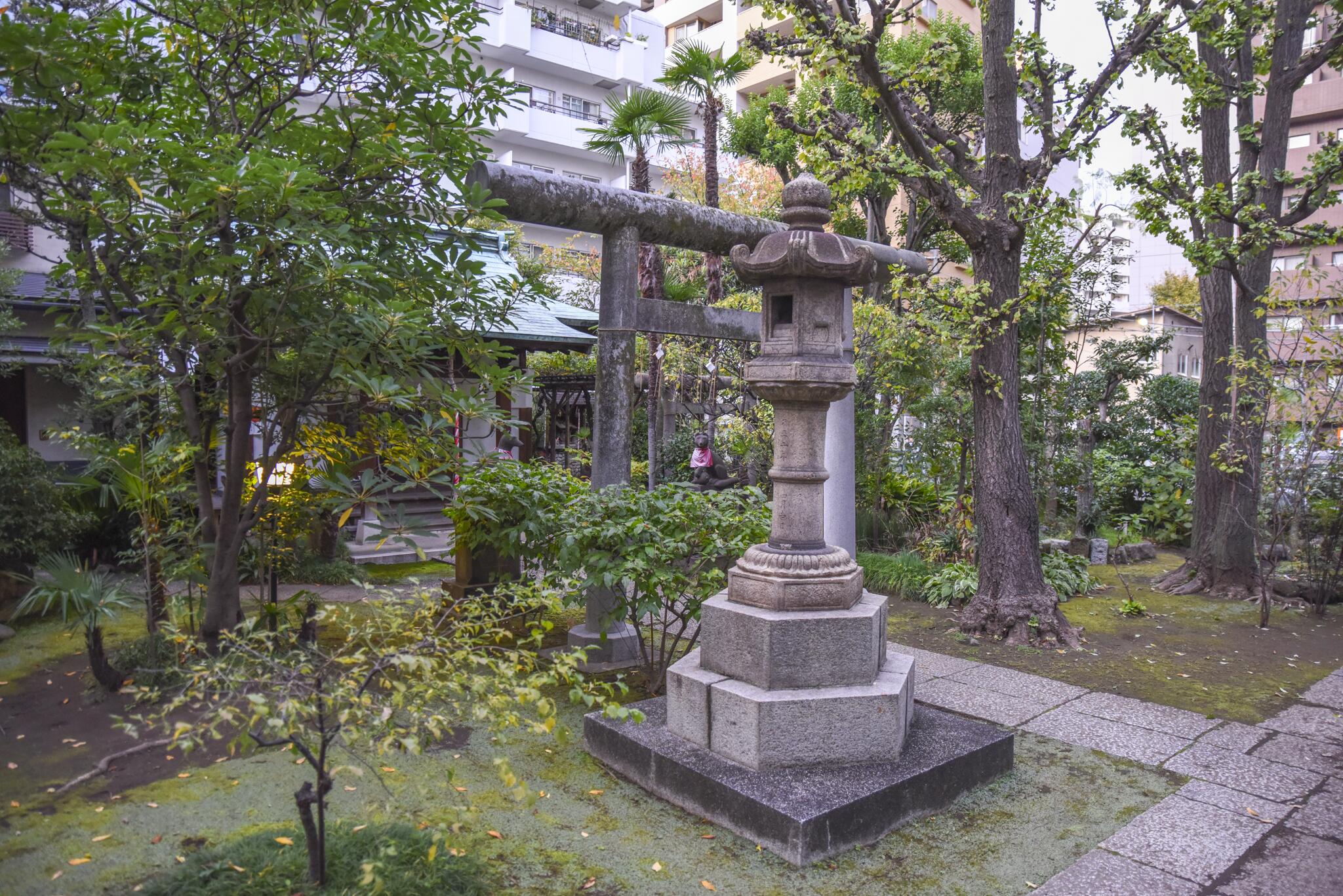 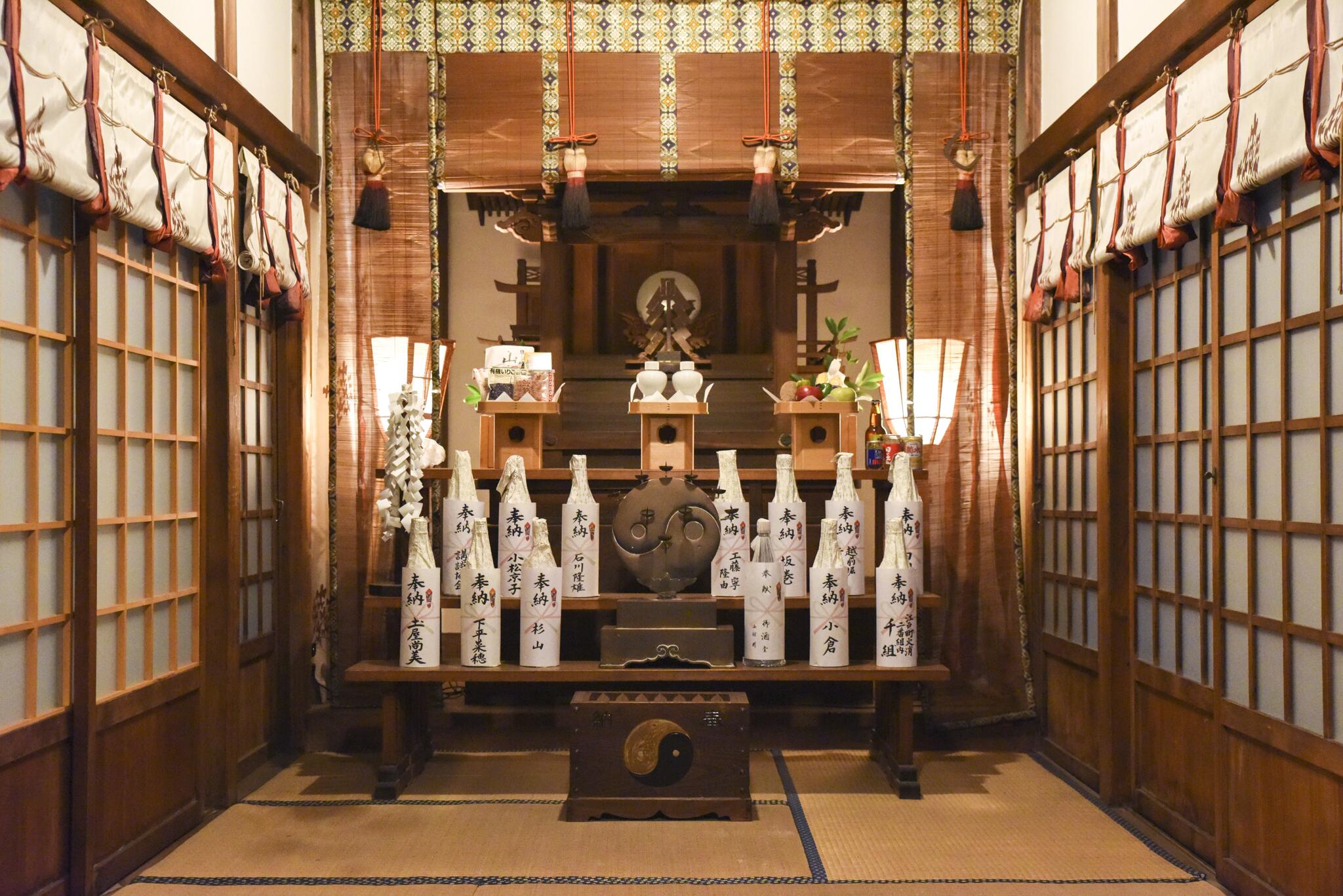 The shrine to Oiwa.

On September 1 of that year, the Great Kanto earthquake devastated Tokyo and the neighboring city of Yokohama, causing up to 140,000 deaths and demolishing more than 100,000 buildings. “Some people believed that because the rail lines intersected the armor and helmet shrines, their protective function was broken—and this too unleashed Masakado’s onryo in the form of a mighty earthquake,” stated Conlan.

He said that the construction of new buildings can further disrupt the geomancy designed to trap malicious ghosts like Masakado. The iconic Tokyo Tower, for instance, had been built in 1958 in the city’s southeast. According to geomancy, this direction is very negative—it is called the “lesser demon gate,” Conlan said.

Then in 2012, another major tourist attraction, the Tokyo Sky Tree, was constructed in the city’s northeast sector, the “demon gate direction.” “It is thought that these two towers create a very bad southwest to northeast line, which completely shatters the protective network of shrines around Masakado,” he said. “Hence, plagues, earthquakes, and other disasters.”

In a year as catastrophic as 2020, it is easy to see why some Japanese people believe the onryo are venting their anger. Even after a millennium of vengeance, spirits like Masakado refuse to relent.