Whereas Tokyo is a city of politics and restraint, Osaka embraces excess with a “work hard and play harder” attitude. The city is a place to be entertained, its citizens reveling in the joy of eating and drinking. Two of the most commonly used phrases in Osaka are kuidaore, which roughly translates as eat until you drop, and asobisugi, or play too much.

If you are looking for World Heritage Sites or meditative contemplation, head over to Kyoto and Nara. If you want to see modern Japan and are willing to be adventurous with what you eat, how much you pay, and what time you go to sleep, then Osaka is the place for you. 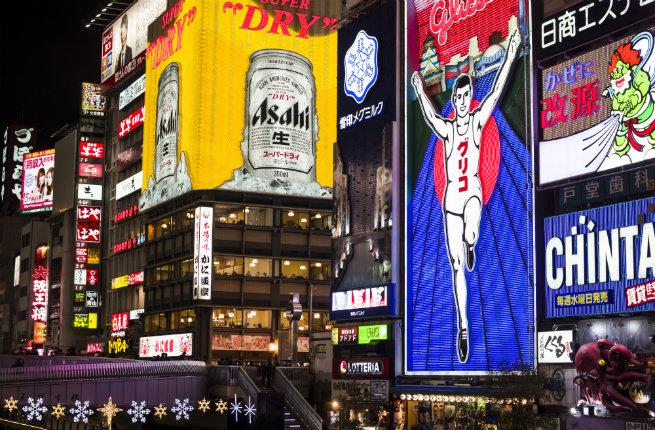 From Kansai International Airport, the express train whisks you straight to Namba, the southern hub of the city. Namba and neighboring Shinsaibashi were once the merchant quarter, but now form Japan’s liveliest entertainment district. Browse the shopping arcades to see what the young are trendy are wearing this season. On the main streets you’ll find the more generic international brands, whereas in the area known as Amerika-mura you’ll get a more eclectic mix of independent stores.

In the Dotonbori district of central Namba you are surrounded by neon lights, LEDs, and giant video screens. Ebisu Bridge, which spans the canal, is both the city’s most popular meeting place, and almost certainly the most photographed. Billboards for Suntory Whiskey and Asahi Beer blaze alongside the iconic Glico running man. When director Ridley Scott presented his vision of the future in Blade Runner, his inspiration was Dotonbori.

The streets of Dotonbori are packed with restaurants and karaoke bars. On the corner by Ebisu Bridge, you’ll spot a giant mechanical crab beckoning diners into Kani Doraku. Farther along the street there’s a giant pufferfish (fugu) above a restaurant doorway. Fugu chefs must have special licenses for preparing the fish, as certain organs contain a tetradoxin a thousand times stronger than cyanide. Diners seeking a safer option should check out one of the many noodle shops such as Kinryu Ramen.

There are many street vendors selling quick snacks to fill up before you head out to the neighborhood bars . Okonomiyaki is a thick pancake filled with cabbage, egg, and seafood, and cooked on a hot plate. Takoyaki are small balls of batter-coated octopus that are fried and covered in sauce and fish flakes. 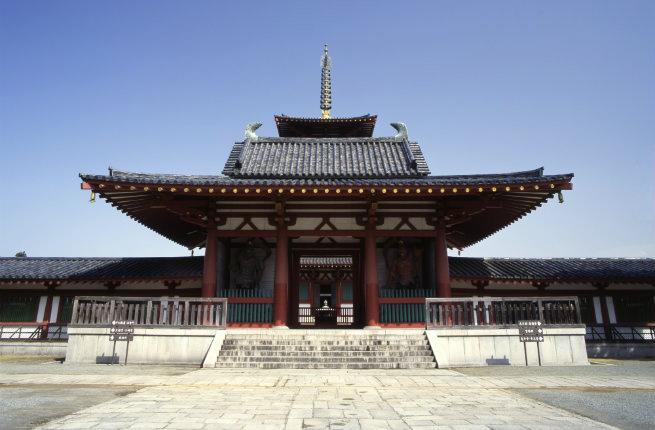 After a big night, start the day with some quiet reflection at a Tennoji Park. Stroll around the botanical gardens, and if you’re feeling cultured stop by the Municipal Museum of Fine Art.

A short walk northeast brings you to Shitenno-ji, the birthplace of Japanese Buddhism, and Japan’s first officially administered temple. Prince Shotoku ordered its construction in 593 AD, but none of the original structures have survived the ravages of time. The reconstructed buildings have, however, stayed true to the original designs and layout. An impressive five-story pagoda stands at the center of the complex, and don’t miss walking beneath the 13th-century stone torii gate, the oldest of its kind in Japan.

Head north to Umeda, Osaka’s business hub. Next to the train station you’ll find the electronics store Yodobashi Camera, which spans six floors dedicated to the latest computers, cameras, televisions, and gadgets. Bring your passport to get duty-free discounts.

Among the generic office blocks is the futuristic Umeda Sky Building, whose 173-meter-high twin towers are connected by a floating garden observatory. First, head down into the basement to Takimi Koji, an elaborate recreation of Osaka alleyways in the 1920s. There’s a good selection of restaurants, such as Tempura Naniwa Hyouten, serving traditional tempura dishes. After dinner head up to the garden observatory and view the bright lights of the city. 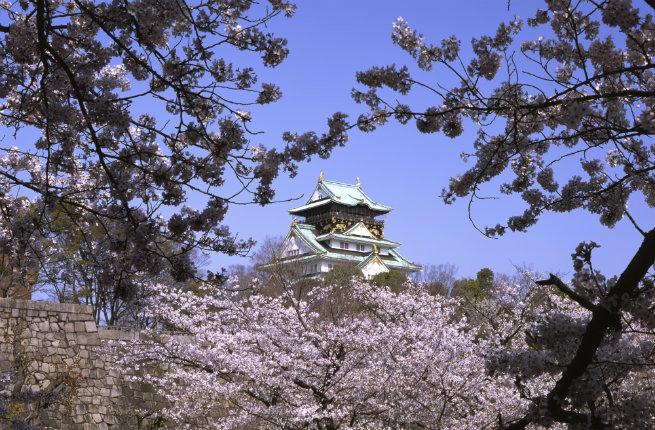 On Sundays you’ll see many Japanese families out exploring the local parks and attractions. A cheap and relaxing option is to head first to Osaka Castle. The “indestructible” castle was built by Shogun Toyotomi Hideyoshi, but repeatedly destroyed by war and lightning. The latest concrete incarnation was constructed in 1931 and managed to survive WWII. The surrounding gardens are particularly impressive when the plum blossoms appear in March and when the cherry trees bloom in early April.

Families will enjoy a day at Universal Studios Japan, located near the bay. The T-Rex and the Terminator were once the stars of the park, but now Harry Potter reigns supreme. There are also a few attractions you’ll see only in Japan; most of these are based on manga such as Dragonball and Yo-kai Watch. 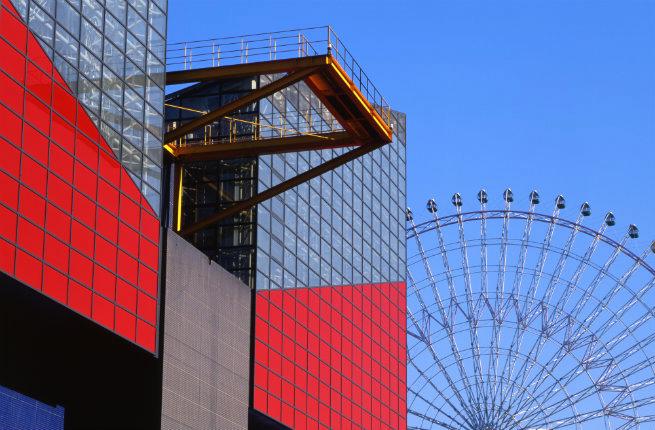 Another option is to visit the Tempozan Harbor Village, which has a range of kid-friendly attractions. The Osaka Kaiyukan Aquarium is themed around the Pacific Ocean’s geologically active “ring of fire.” Visitors first encounter sea otters playing on the ocean's surface and are then taken deeper to the giant crabs that dwell on the sandy bottom. Beside the aquarium is the Tempozan Ferris Wheel, which was once the world’s largest. For many, a highlight to an Osaka visit is a harbor cruise in a double-scale reproduction of the Santa Maria, which takes passengers on 45-minute cruises during the day and a 90-minute evening cruise that departs at 7 pm.

The Intercontinental Osaka is a deluxe modern hotel with an unbeatable location and great views from the top floors. If you’re on a budget, the more simple Hearton Hotel is a short walk from the Shin-sai-bashi subway stop and the Mido-suji and Shin-sai-bashi shopping streets. 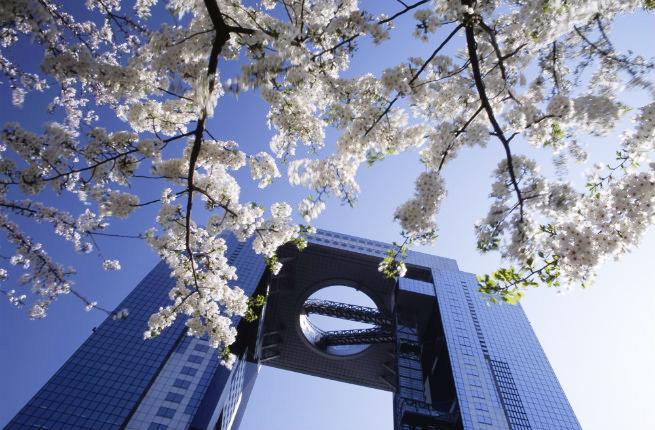 Avoid the Japanese national holidays of New Year, Golden Week (early May), and Obon (mid-August). At these times the prices for flights and accommodations are expensive and most attractions are crowded.

Cherry blossom season is around the first week or ten days of April. It’s easy to reach famous cherry blossom spots in Kyoto and Nara if based in Osaka.

International and some domestic flights land at Kansai International Airport. Trains connect the airport to Namba (40 minutes on the Nankai Rapi:t) and Osaka Station (71 minutes with Japan Rail).

Most domestic flights arrive at the more central Itami Airport. Limousine buses take about 25–30 minutes to reach Umeda, Namba, or Shin-Osaka. Itami is also on the Osaka monorail, which connects with the city's subway system.

The subway is the best way to get around the city from 5 am to midnight. Purchase individual tickets at the machines or get a one-day pass.