At the dimly-lit Anata no Warehouse, or “Your Warehouse,” in Kawasaki, Kanagawa (in the Greater Tokyo Area), every wall of every room—from the bathrooms to the barbecued-chicken stand—is dingy and dilapidated, covered in a layer of fake filth. Designer Taishiro Hoshino spared no detail in recreating Kowloon’s Walled City—an overpopulated and unregulated neighborhood that once existed in Hong Kong—on which this five-story arcade is based. The towering building’s external facade has a run-down, weather-beaten appearance, and inside, 80s-style neon lighting flickers throughout its five floors; a key element in the recreation of the “city within the city,” as the vanished Hong Kong landmark was known.

Though the original Walled City was a source of inspiration for this arcade and for many dystopian films including Ghost in the Shell and the cult classic Blade Runner, the reality of life within its borders was bleak. Residents were packed into a cluster of narrow alleys with messy bundles of overhanging pipes and electrical wires, and the fog of factory fumes ever-present. At its peak population, the labyrinthine neighborhood contained 50,000 occupants within its 2.6-hectare (6.4-acre) boundary. Because of complicated land-occupation issues between China and Britain, the Walled City became a lawless territory, falling under the control of local gangs known as triads. As a result, there were high rates of prostitution, gambling, and drug abuse. Given this historical context, it’s no surprise that the recreated version—despite its fun arcade activities—is a kid-free zone (for adults 18-and-over only).

The main attraction for those frequenting the arcade is, without doubt, the video games. The arcade’s retro character isn’t just for show—it has a dedicated floor of 80s classic arcade games like the original Street Fighter. Each floor of the building is dedicated to different types of activities, from table tennis and pool to claw machines and purikura (Japanese photo booths). Taiko drums, Mario Kart, darts, Dance Dance Revolution, pachinko—you name it, they have it somewhere in the grimy gaming galleries. 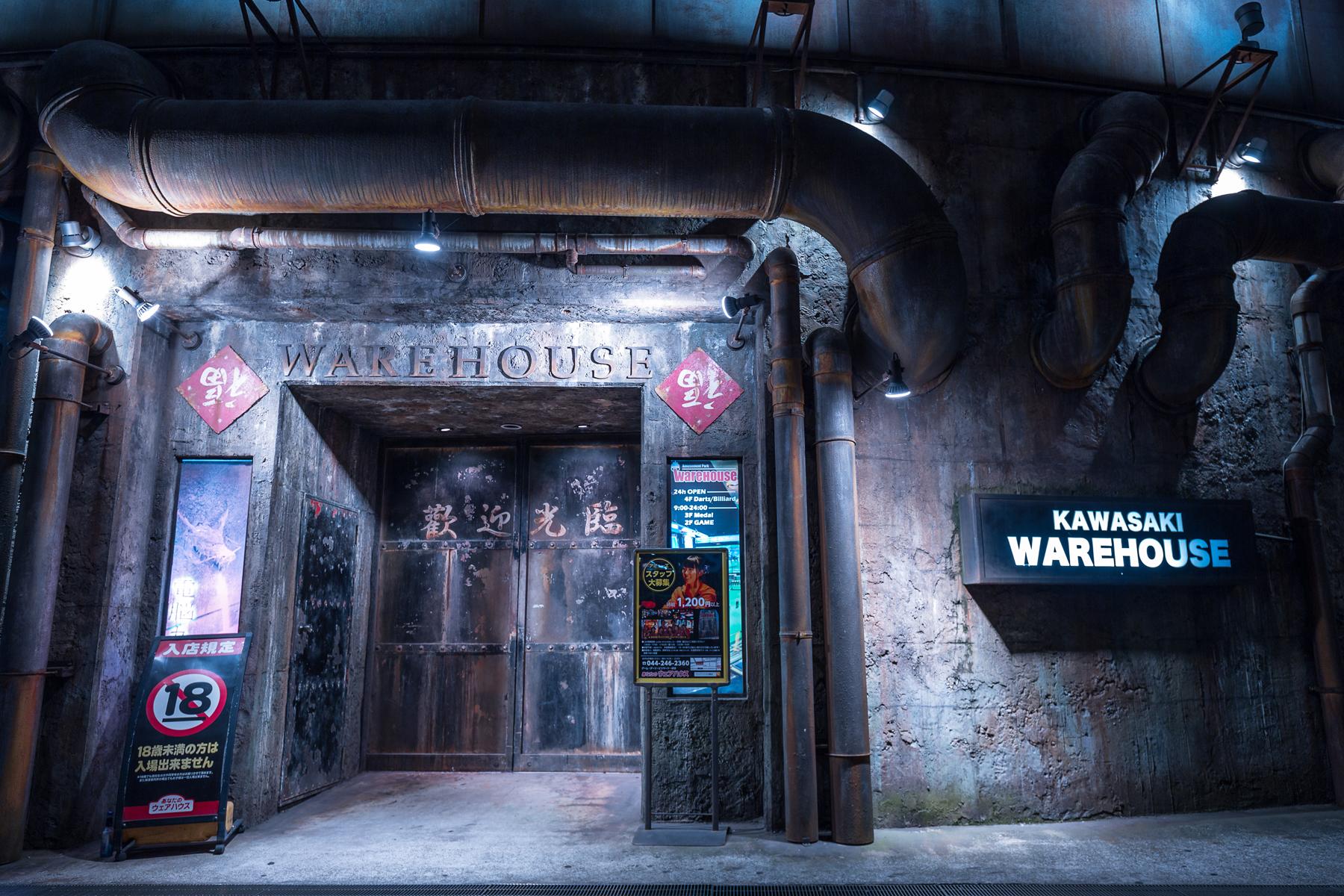 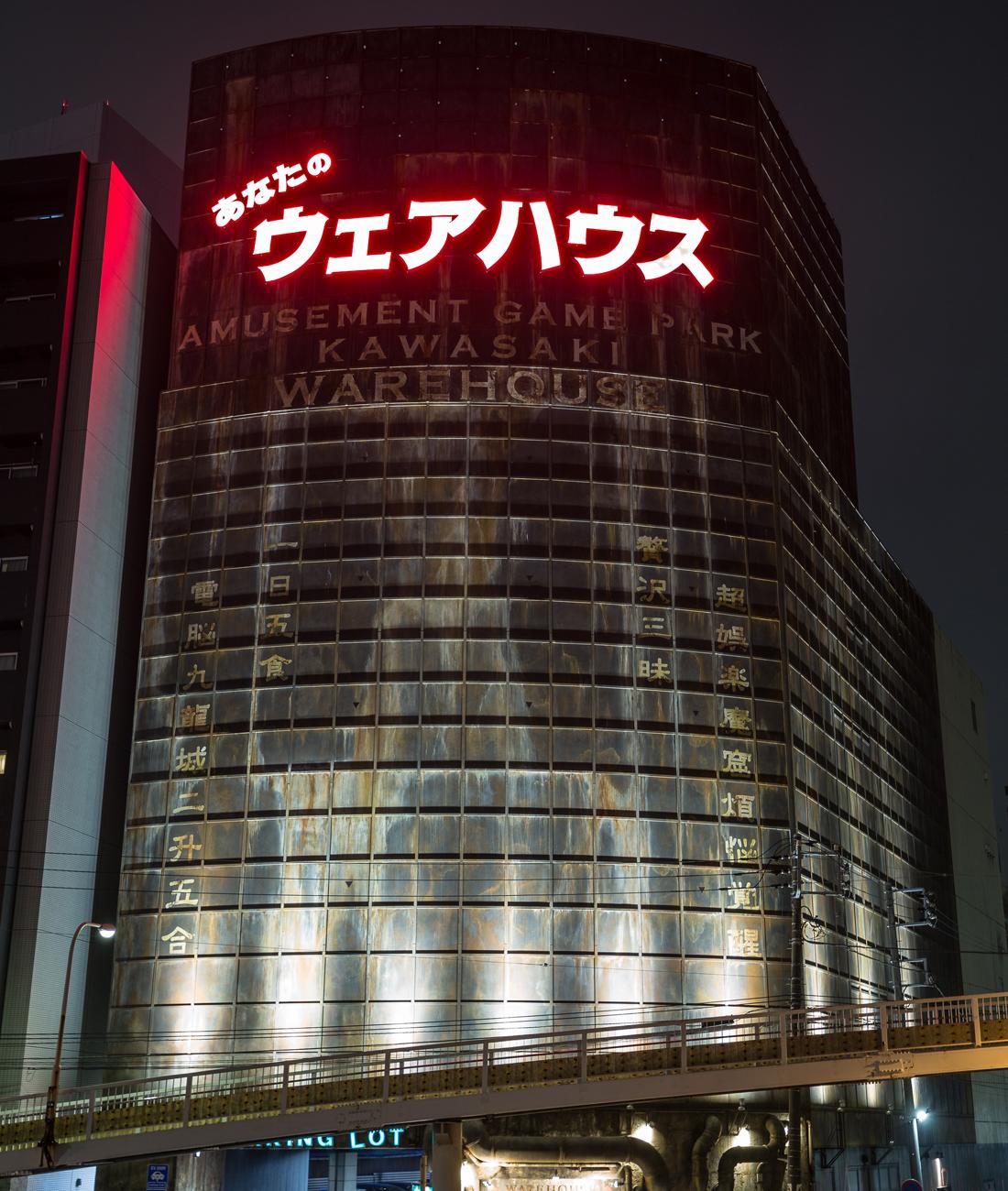 The imposing warehouse has a rusted facade matching the appearance of Hong Kong’s now-demolished walled city. 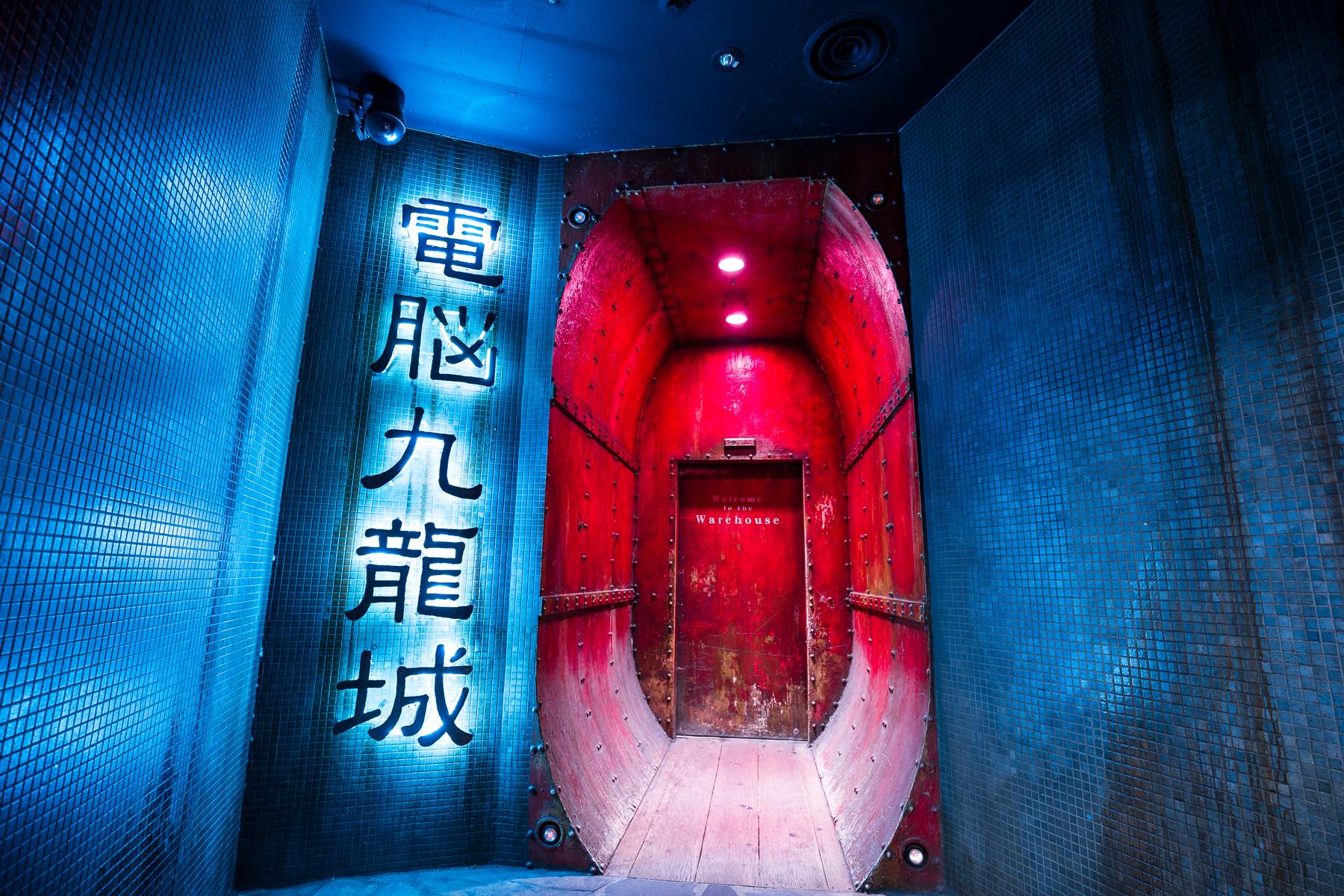 The warehouse entry door abruptly slides open with a sudden loud hiss followed by the sound of rats scuttling through the walls and whispers echoing all around. 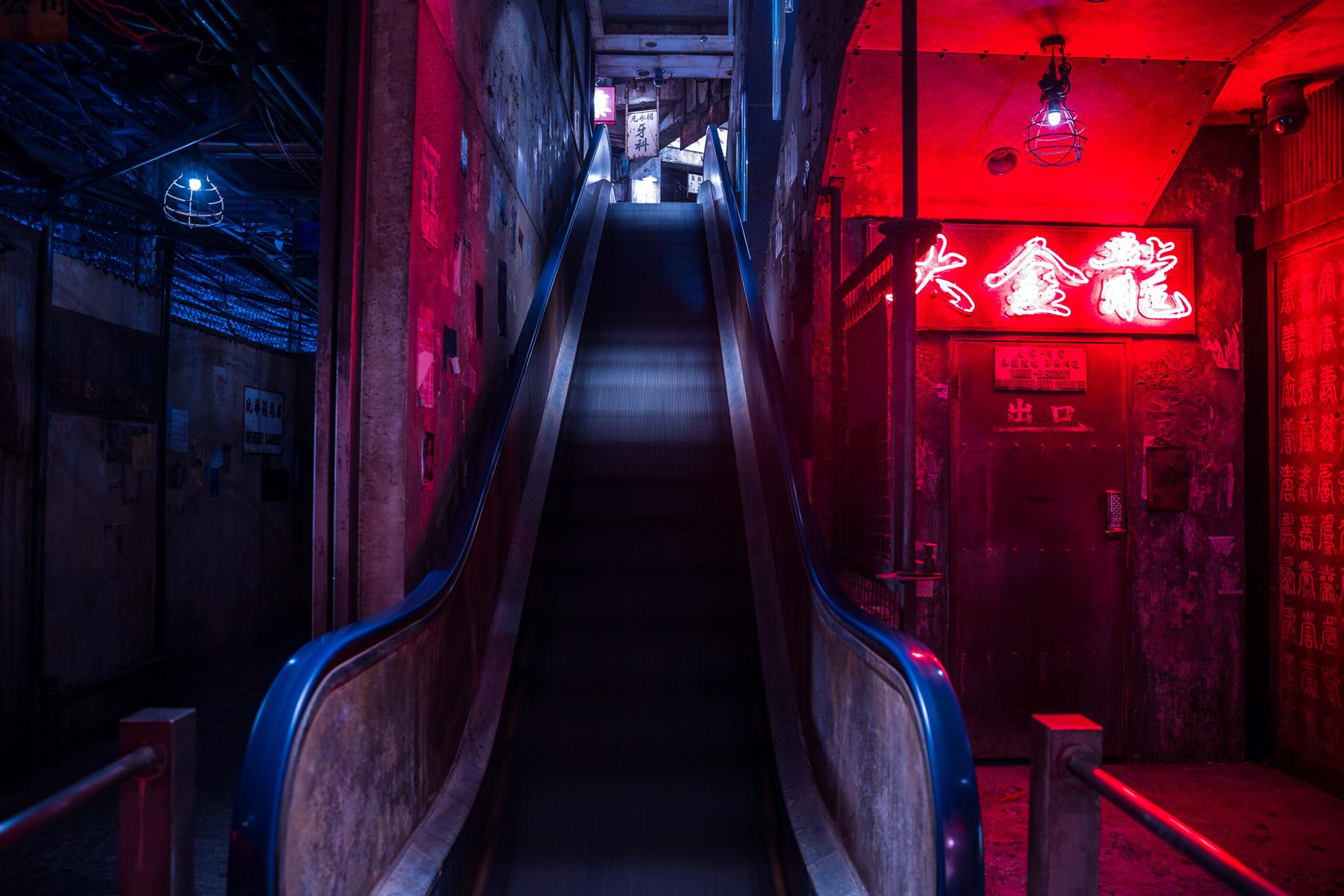 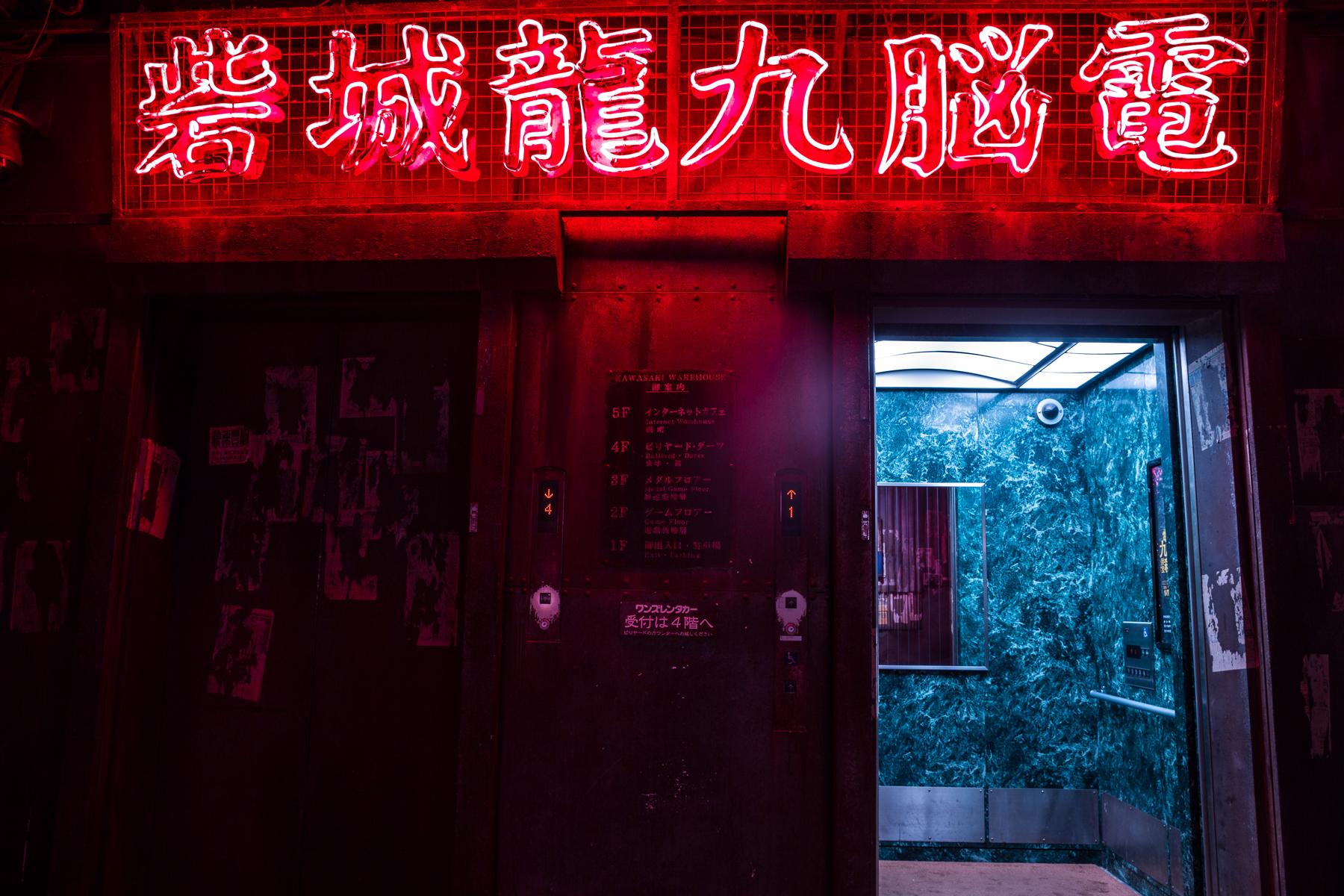 As you leave the ground floor and make your way into the arcade itself, the sounds of the faux-Hong Kong townscape are replaced by the cacophonous roar of arcade machines. 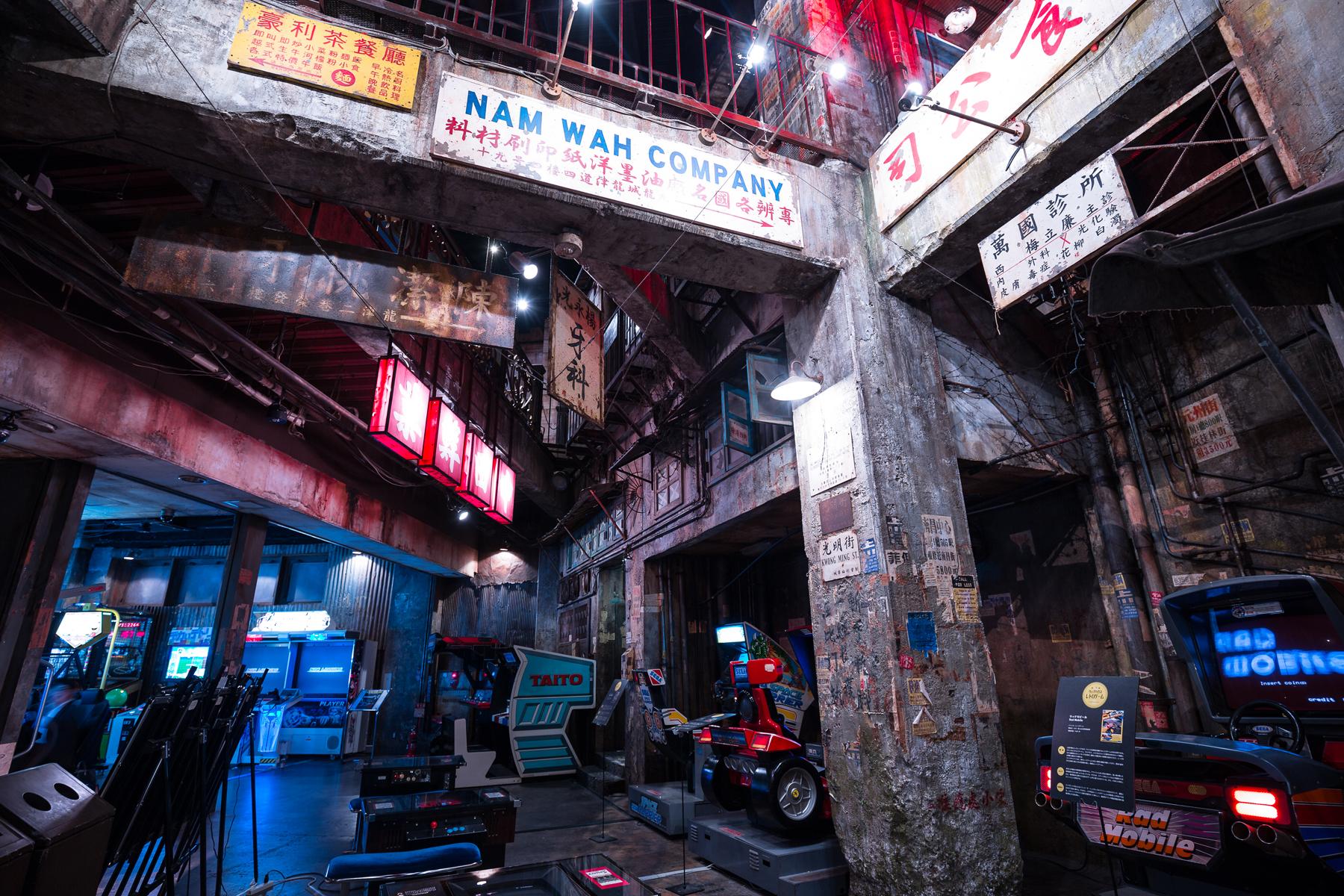 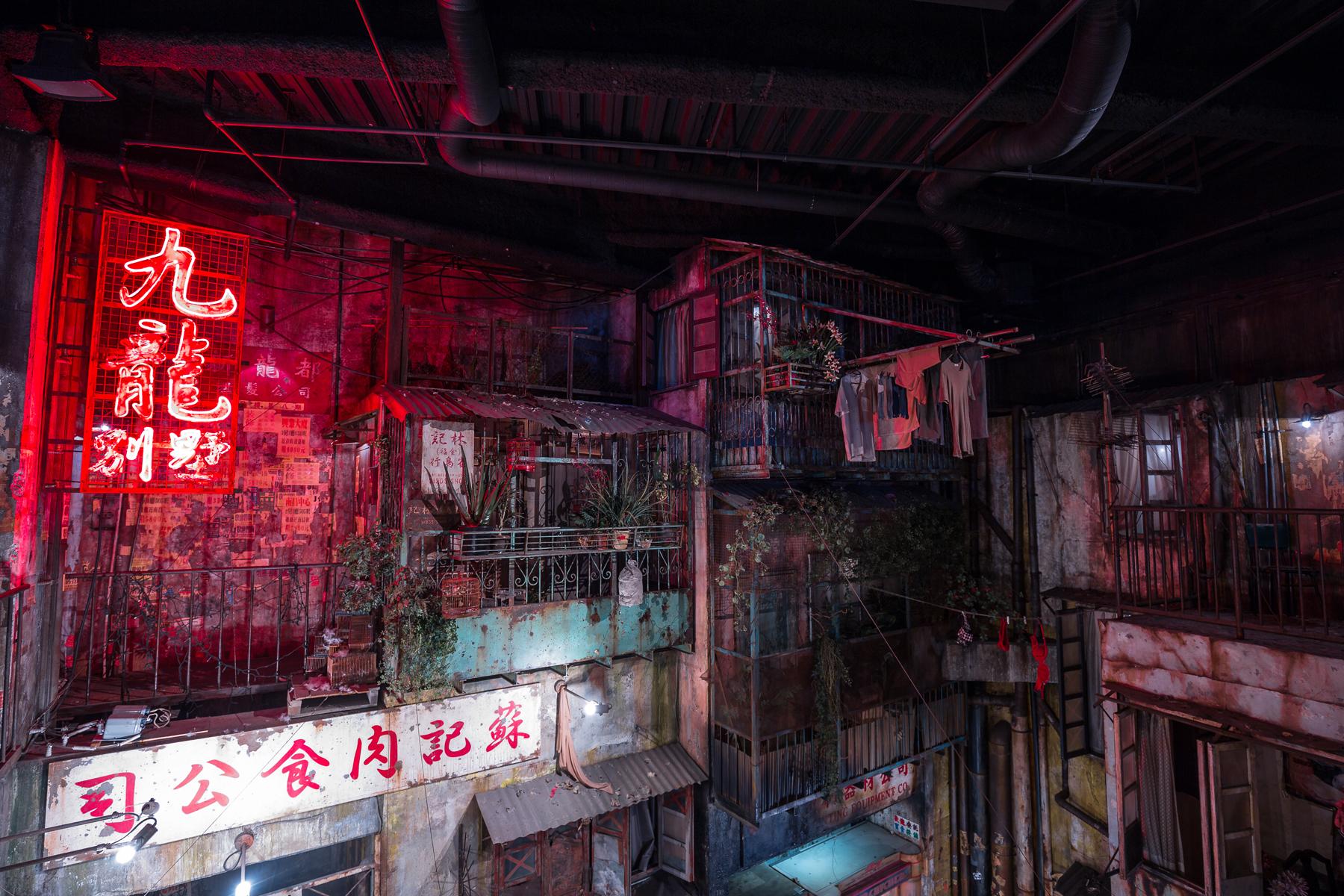 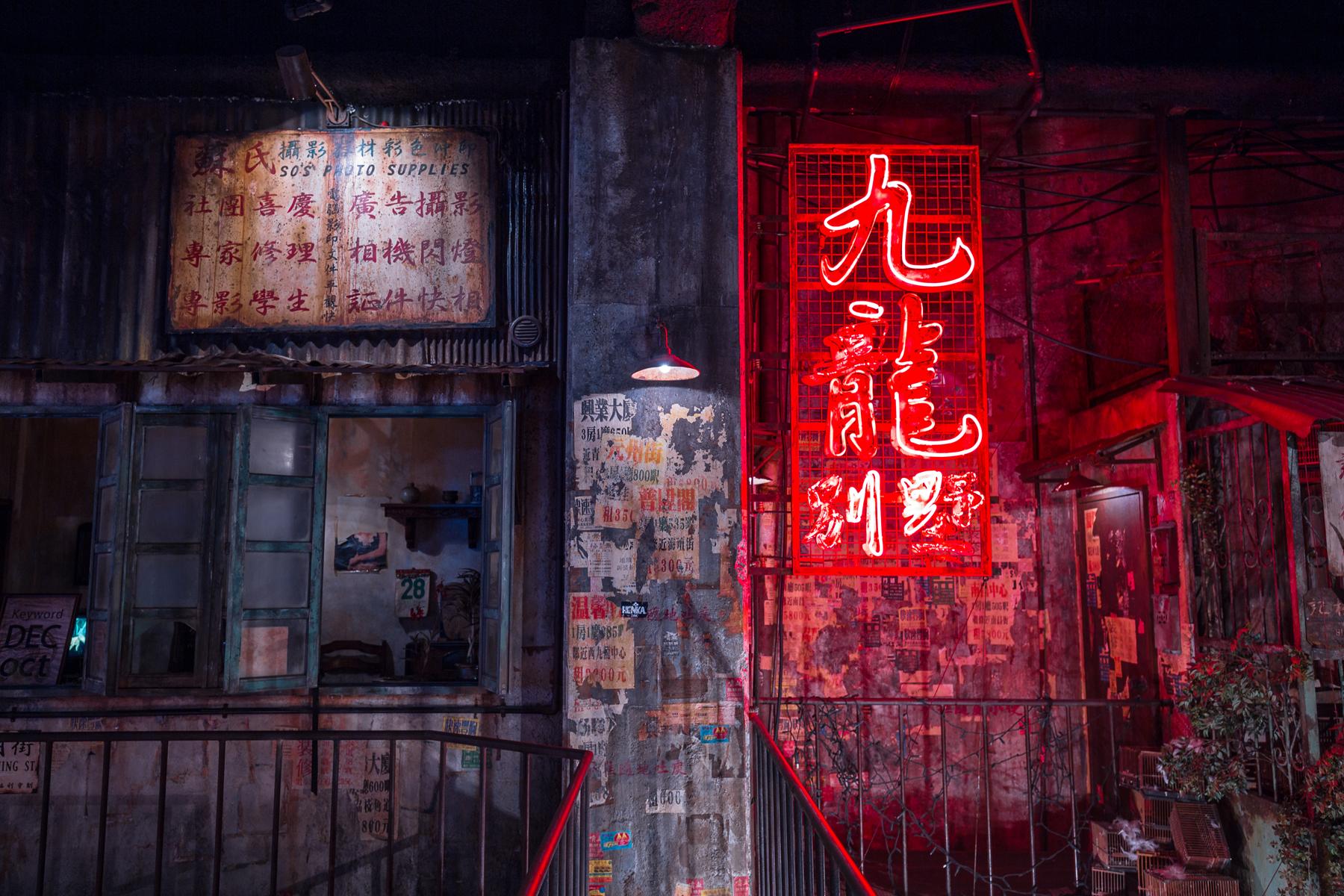 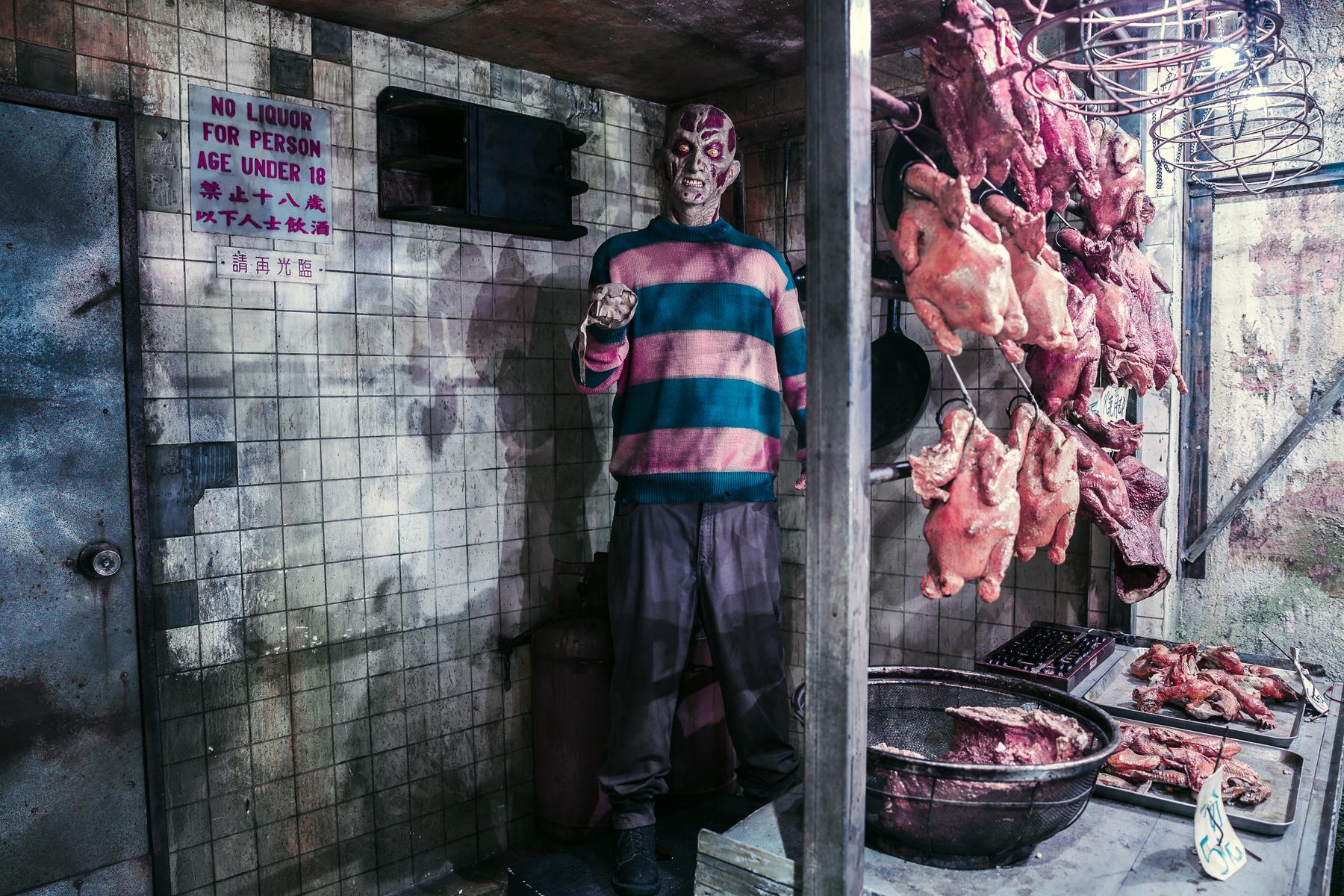 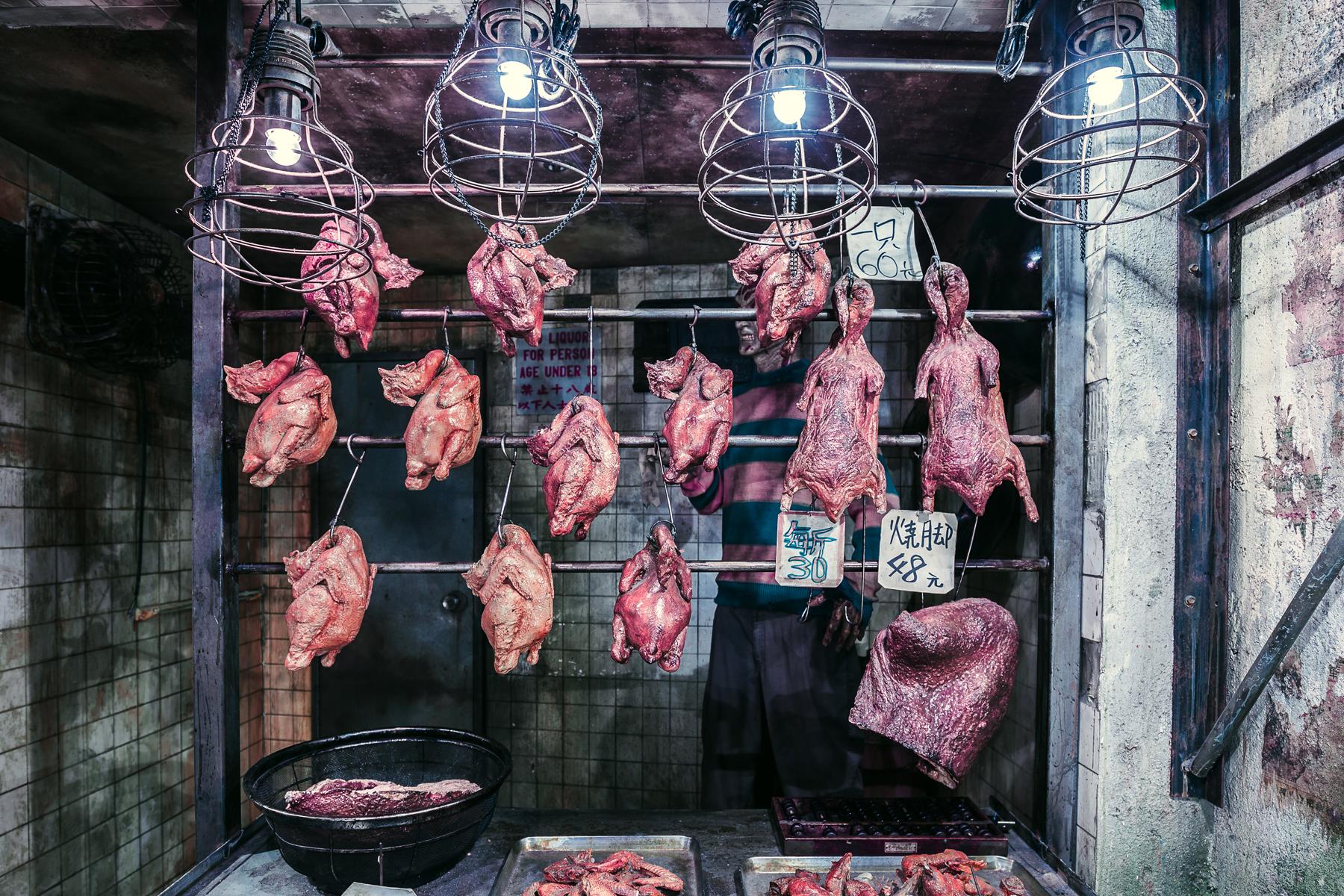 The facade of the city becomes more apparent with store signs, advertisements, mailboxes, and a meat vendor stall. From here on, the city’s dystopian aesthetics mix with the arcade vibe. 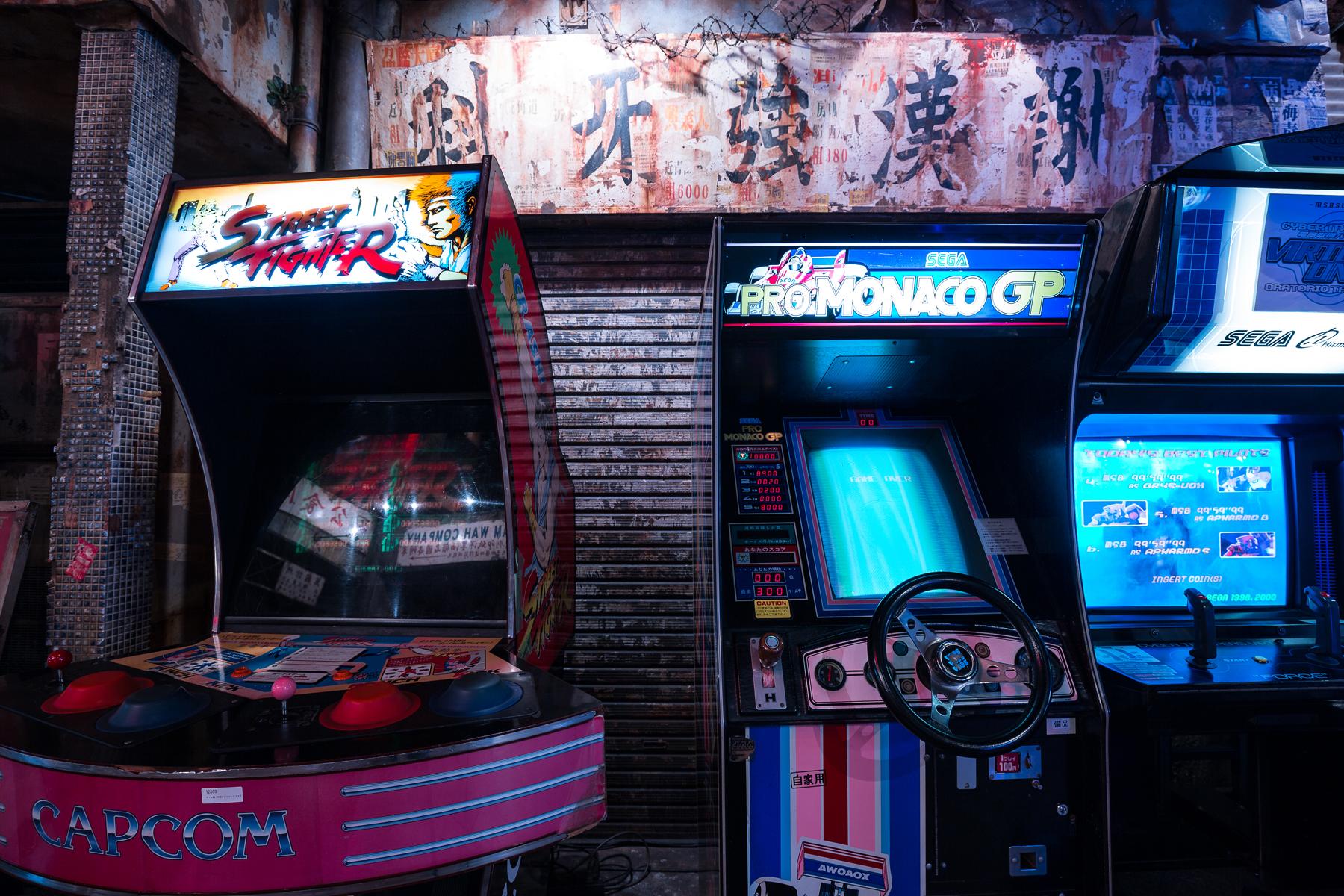 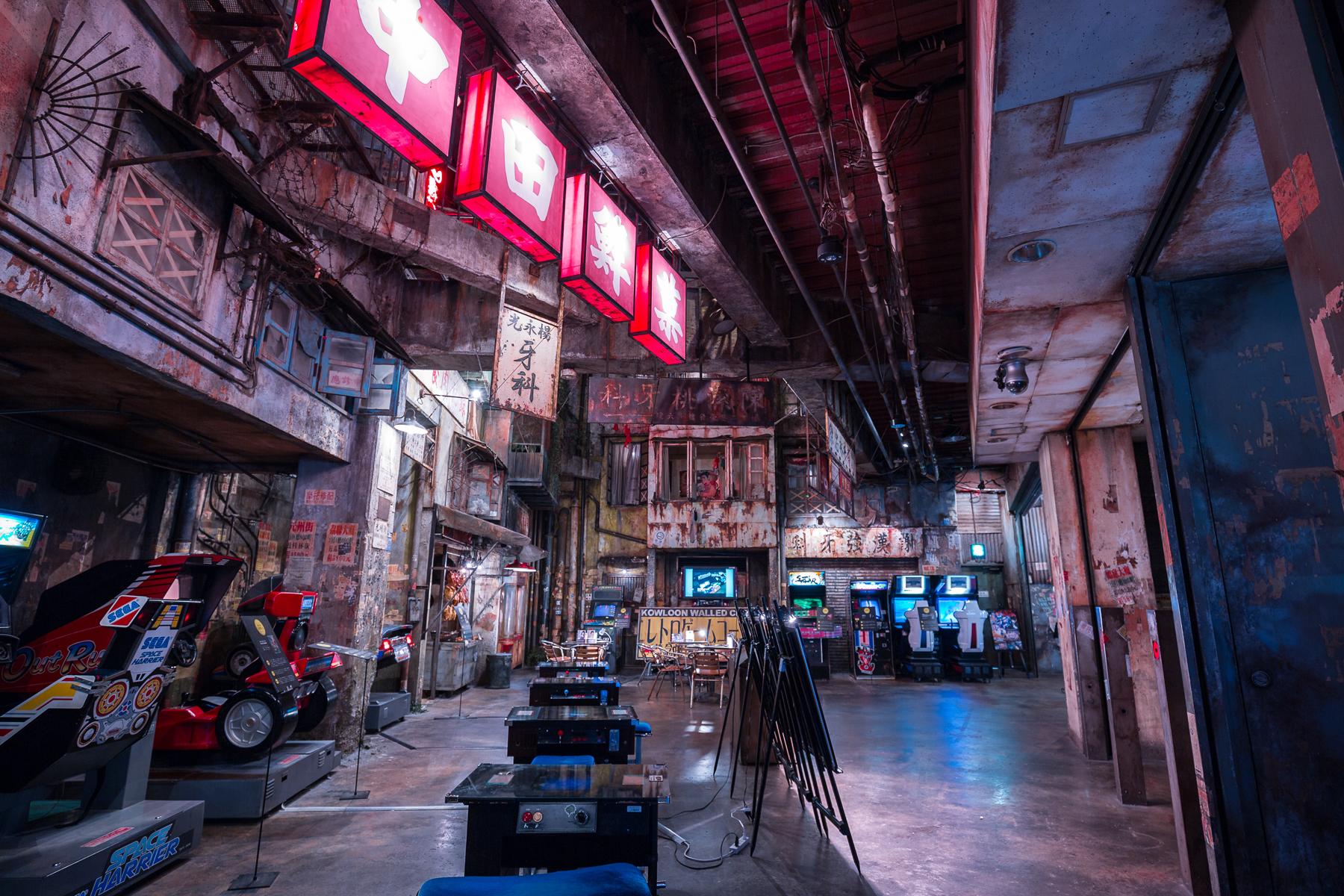 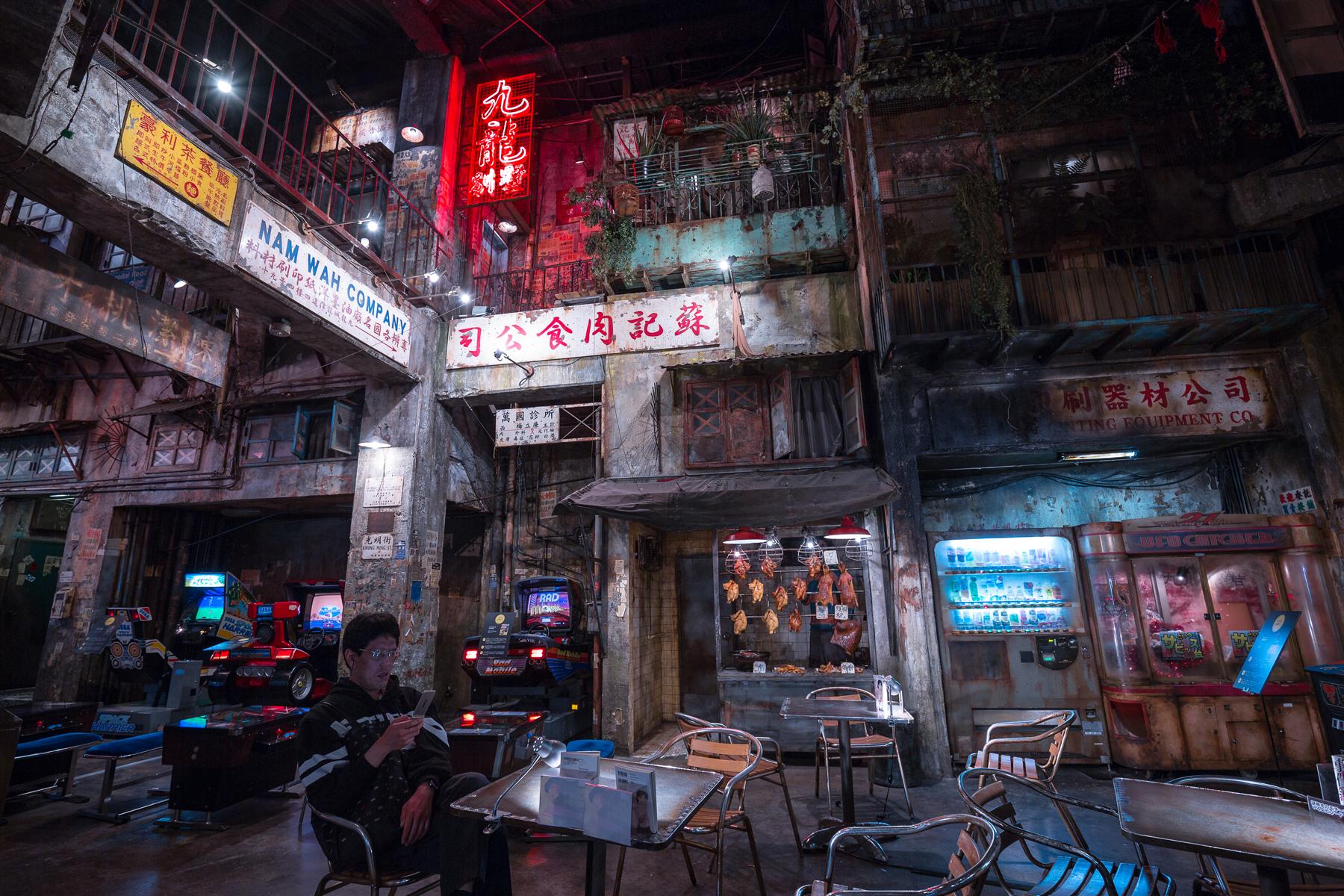 The warehouse is filled with the kinds of games that would have been played in Hong Kong during the late 80s and early 90s when the Walled City saw its final days. 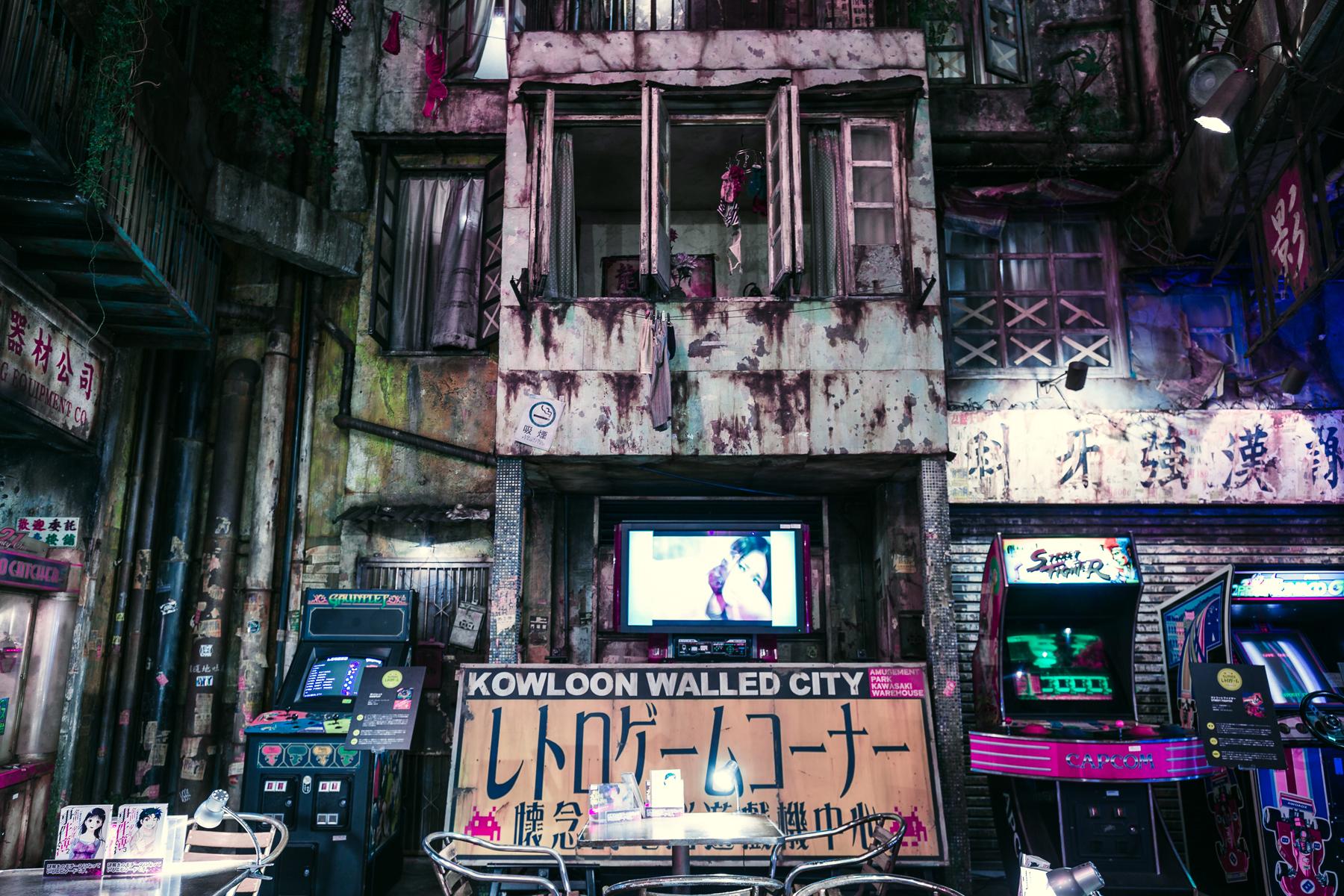 There are windows that peer into staged rooms where fake prostitutes lounge. Moisture stains cover the walls alongside ads for dubious dental and medical services. 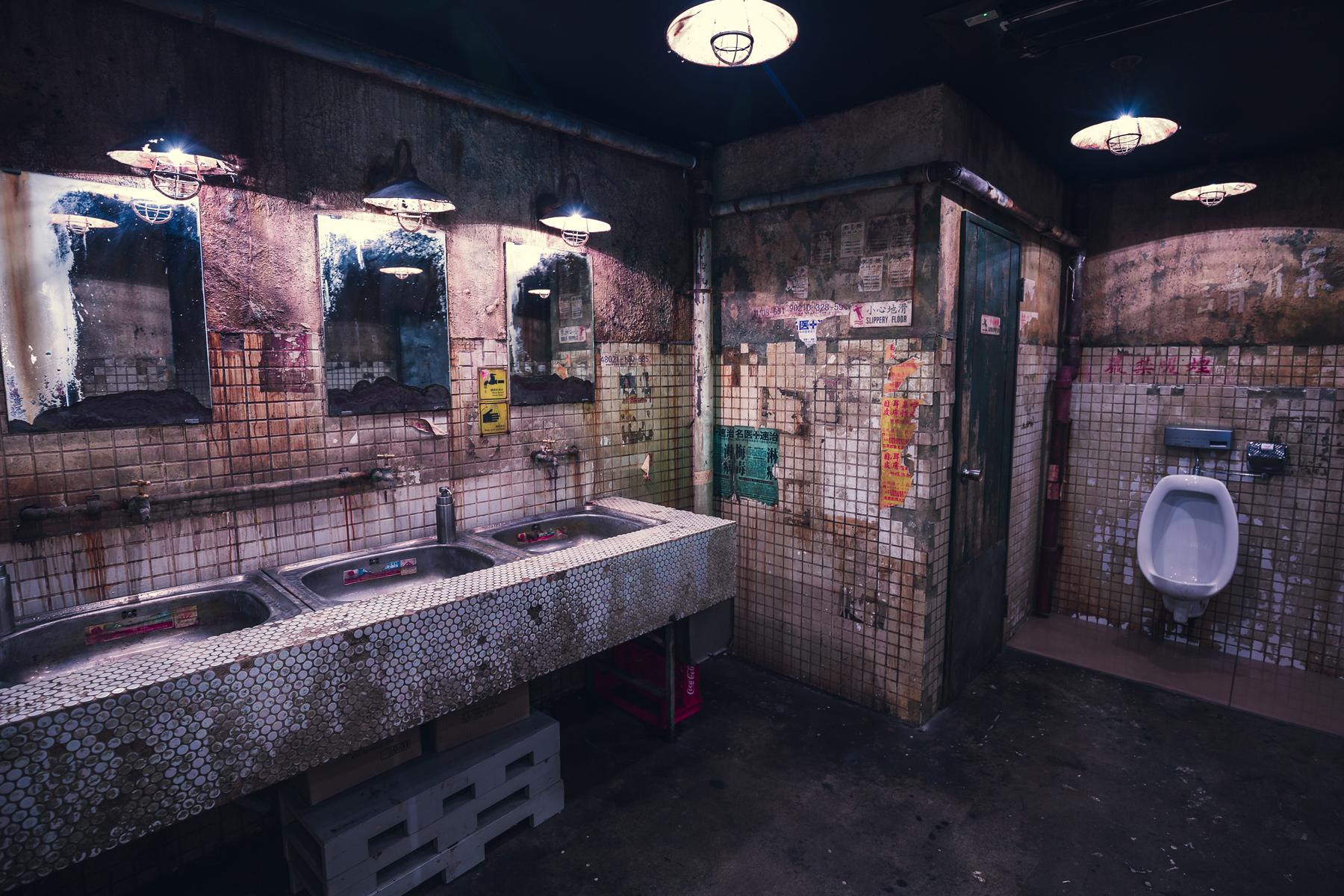 The bathrooms are covered in fake scum to add authenticity to the recreation. While building the arcade, the designers studied old photographs of Kowloon and even had trash shipped over from Hong Kong to help replicate the grimy atmosphere. 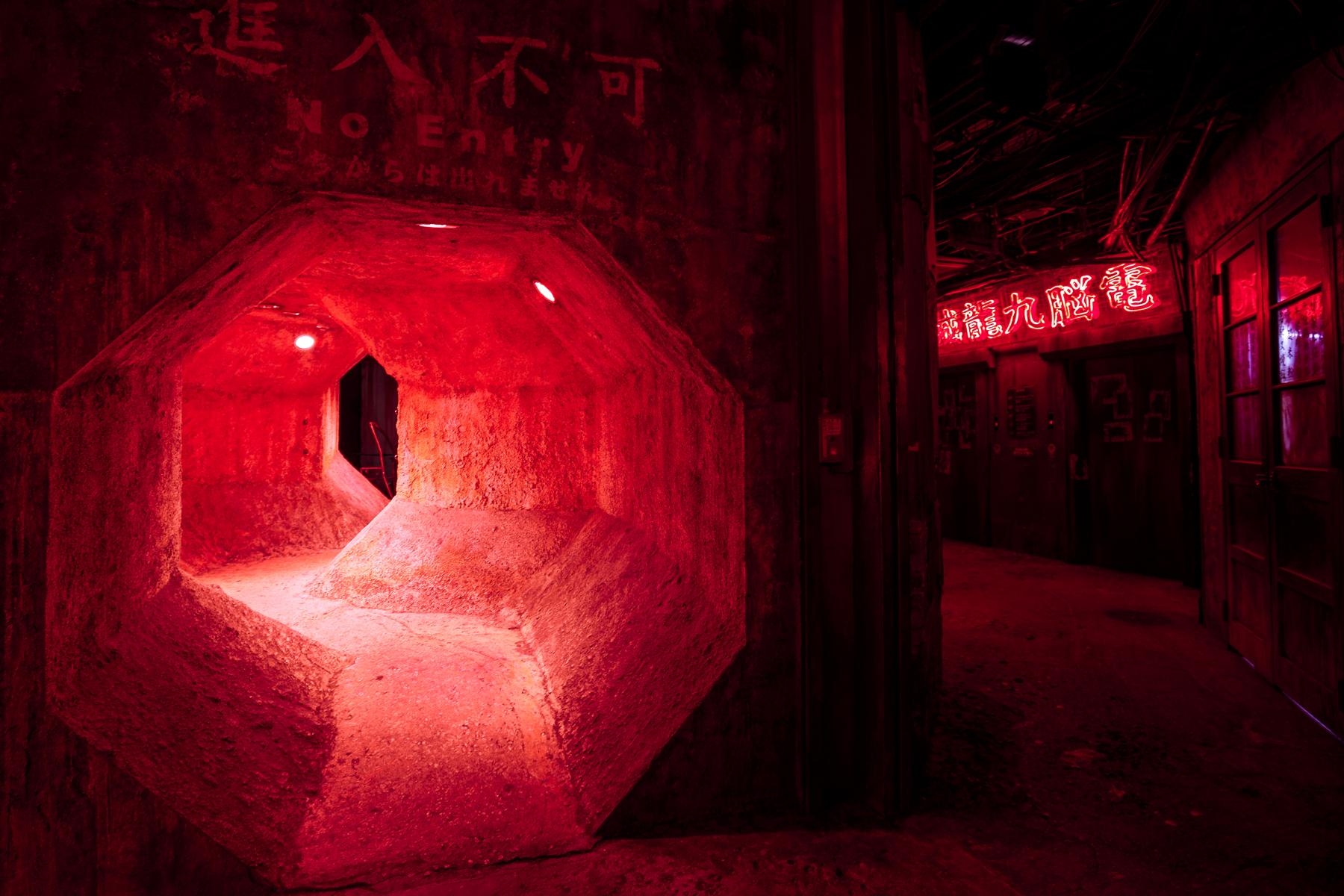 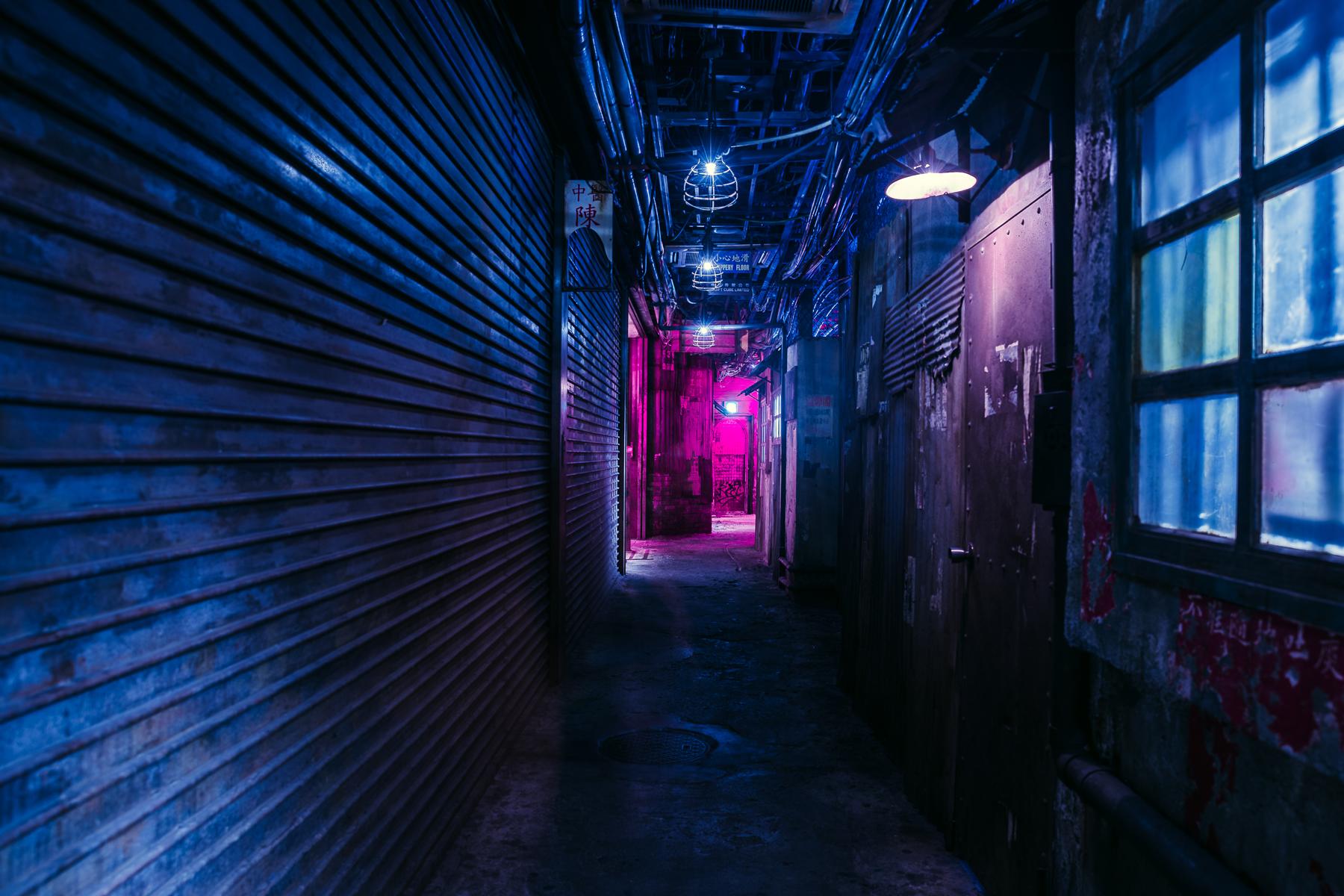 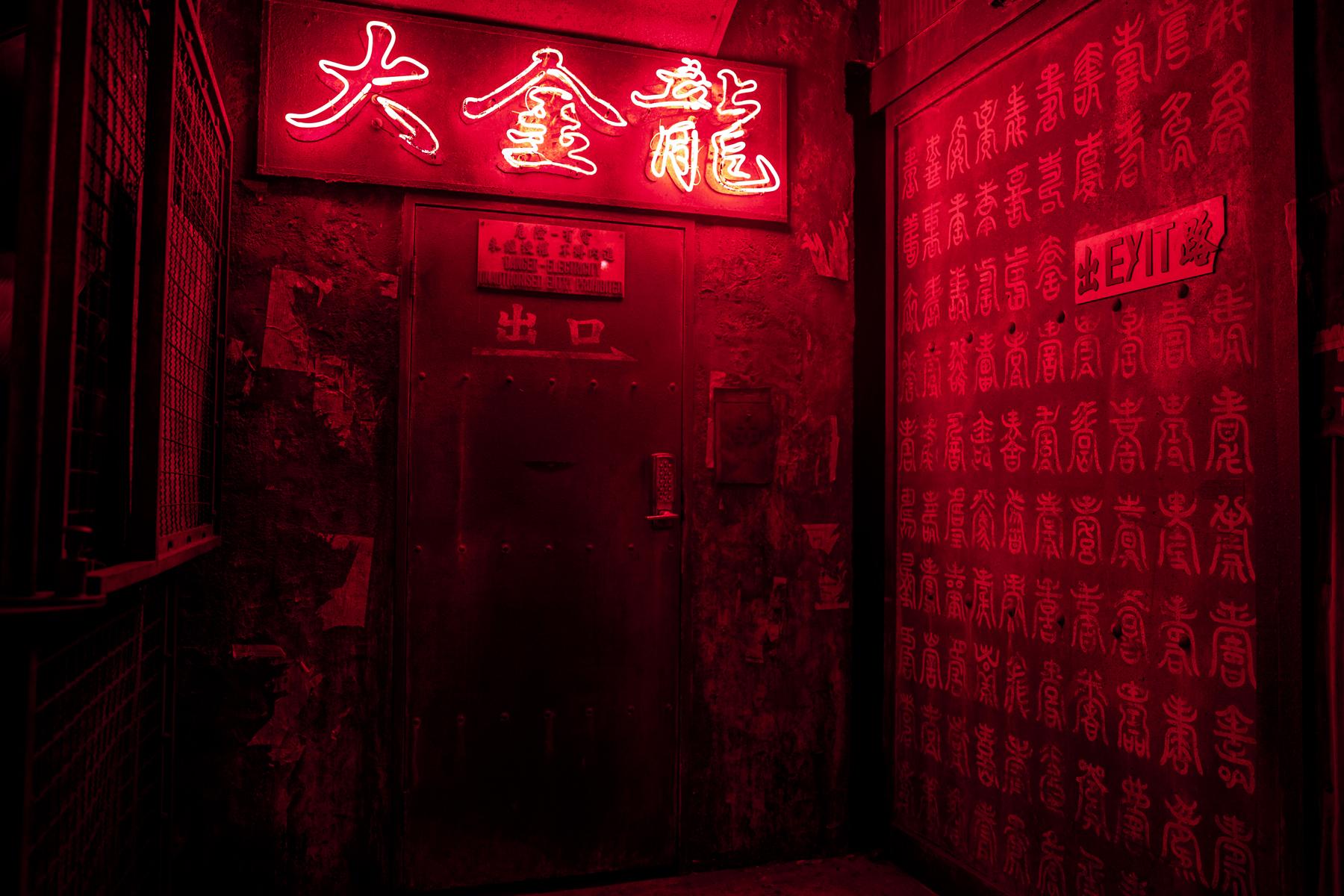 The theme takes a sci-fi-fantasy twist in the hallways leading through to the back exit, which contains an eerie red flood-lit tunnel. 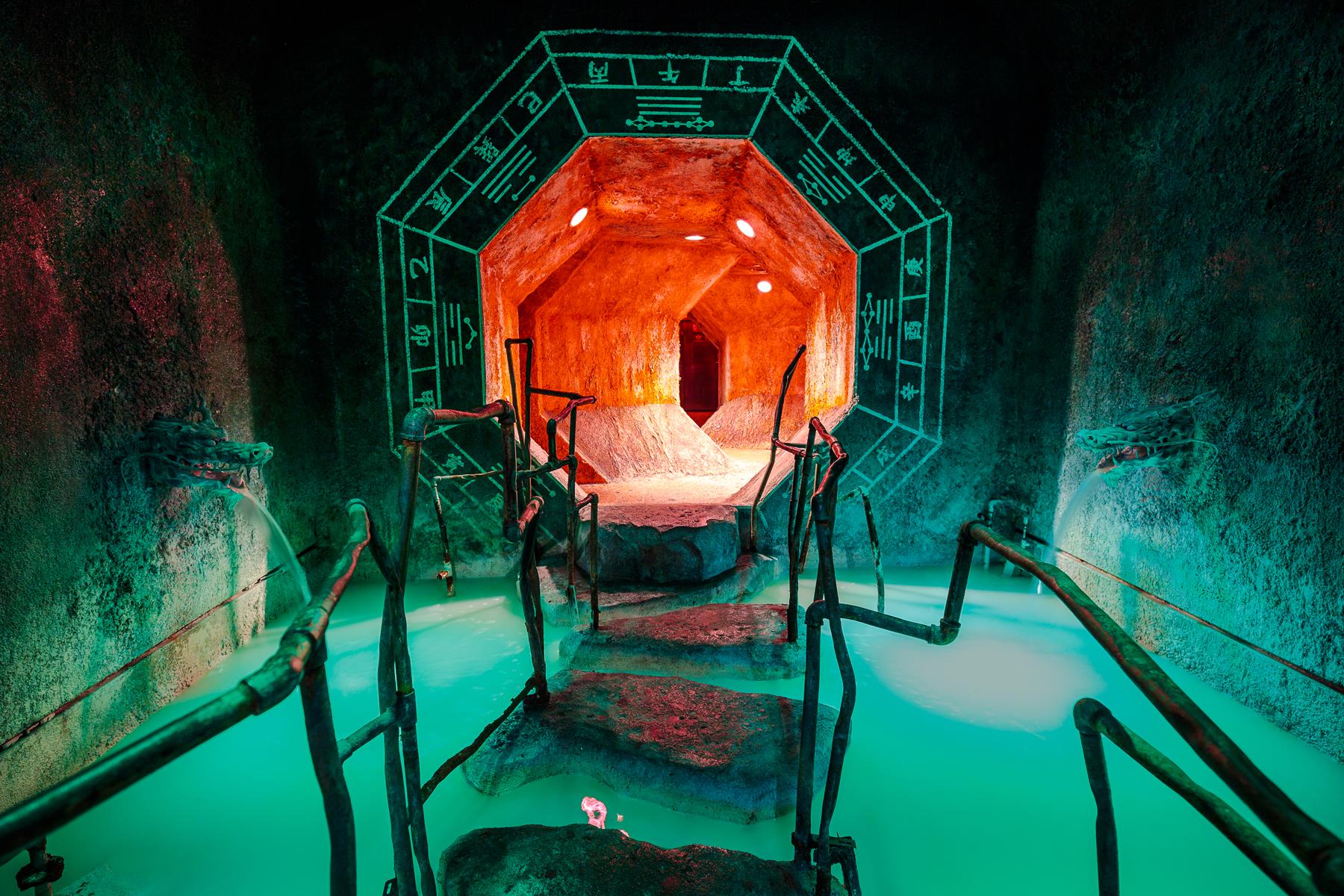 A foggy pool of neon-green acid with a stepping-stone path must be traversed to get to the exit door. 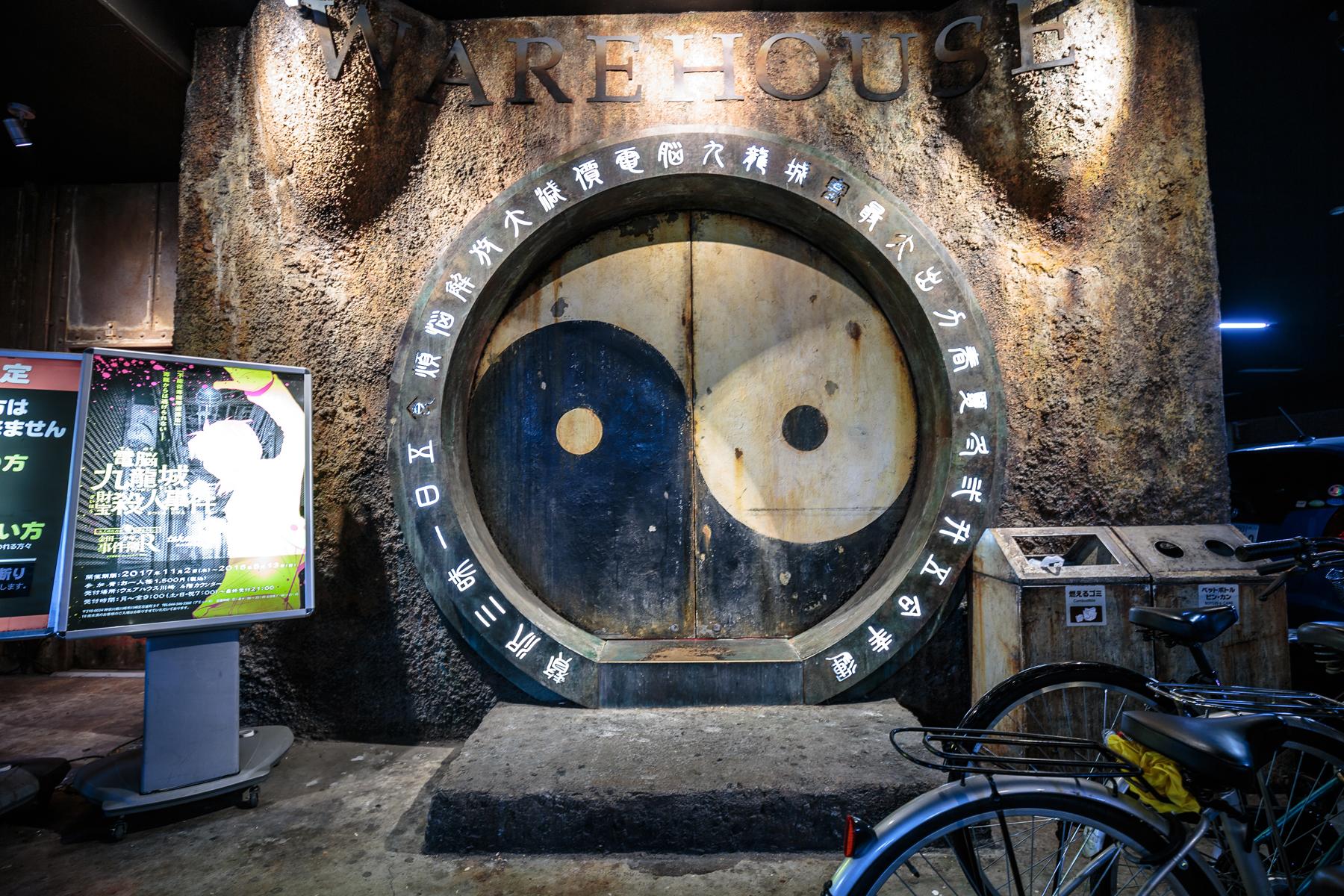 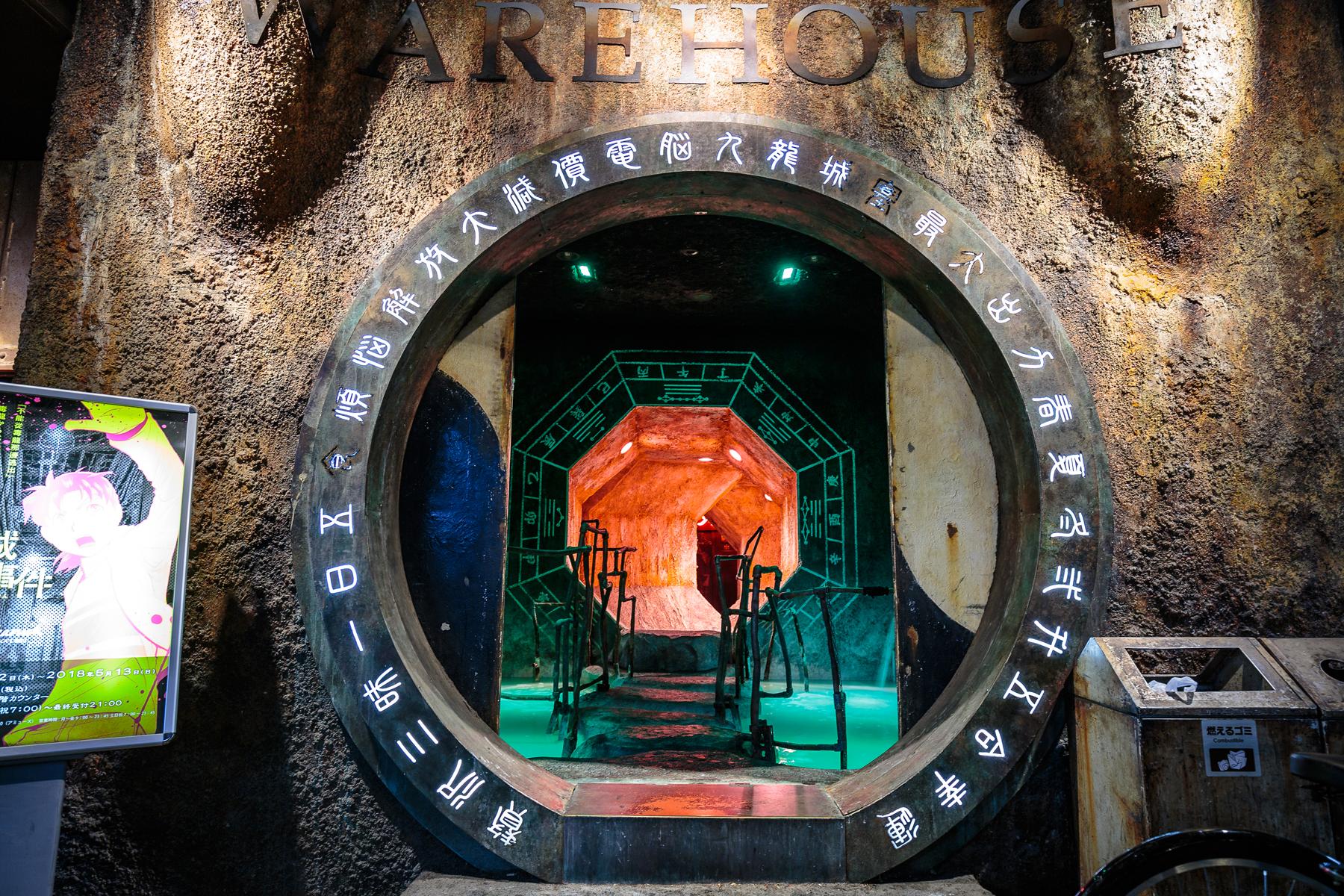 A round yin-yang door marks the way out—or a back entrance for those who know their way around.