Three different otters, two of which are mascots, have been affected by the actions of one culprit, and it has resulted in the firing of a real otter (who is innocent).

Confused? Here is the tale.

How It Began: The First Otter

Japan loves mascots. Yuru-chara is the Japanese term for their mascot characters, created to promote just about anything. They have mascots for cities and regions, businesses and events. They’re usually very cute and incorporate some sort of local culture in their design.

The mascot in our story is named Chiitan.

Chiitan, who is a popular real-life otter (rather than a man in a costume) with a large social media following, was given the title of “Honorary Tourism Ambassador” last year by Susaki, a city in southern Japan.

After Chiitan was given the Honorary Tourism Ambassador title, an unsanctioned costumed mascot based on her likeness began wreaking havoc on the city by posting videos of it performing frightening stunts all over town, including tipping over a car and swinging a weedwhacker in the air. This mascot, who wears a pink turtle on her head as a hat, was created by people unassociated with Chiitan, but they, confusingly, have taken on the same name.

The imposter mascot that no one asked for, who is verified on Twitter, also posted a video online depicting the costumed mascot otter taking a baseball bat out of a locker, with the caption of “Chiitan going to visit your house.” Naturally, all of these videos went viral and caused panic throughout the city. 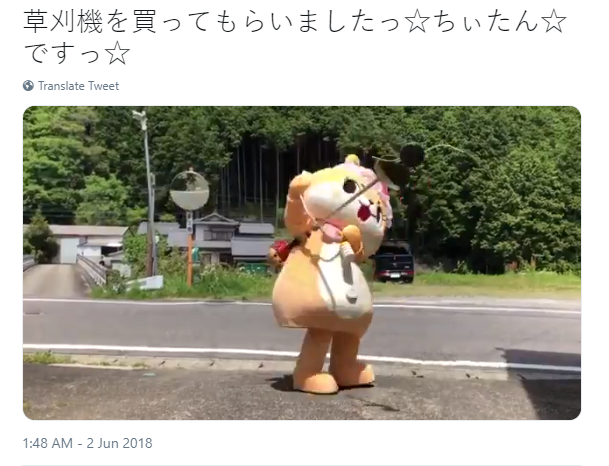 And Here Comes a Third Otter

Wait, it gets weirder. There’s a third otter involved in this debacle and he is also a mascot–this otter is named Shinjokun, and he is the city’s official mascot–not to be confused with Chiitan, who is the honorary mascot. When Unsanctioned Mascot Chiitan started tormenting the city with her shenanigans and claims of Chiitan authenticity, many citizens wrongly mistook her for Shinjokun, who does not do unsafe things (unless you count wearing a bowl of noodles on his head as a hat, which he does do) and is neither Chiitan the real otter nor Chiitan the mascot otter. As such, this third otter (who actually was the original otter mascot) was villainized and condemned simply for being an otter mascot.

So, where are they now? After the city received over 100 calls from concerned townspeople, they quickly fired Chiitan (the real otter, who did nothing wrong), in order to separate themselves from the ordeal entirely. Chiitan the horrible mascot continues to post unsettling videos for seemingly no real reason and with no regard for the fallen hero of our story (the actual otter). Shinjokun, the original otter mascot, still remains the official mascot of the city, after his name was cleared in relation to the crimes committed by the mascot version of Chiitan.

This is a good reminder that sometimes life is just not fair. Our respects go out to Chiitan, who has gone back to being a regular, unemployed famous online otter.