This city by the sea may soon be in the sea.

On Monday, Indonesian President Joko Widodo announced that due to the fact that Jakarta is sinking into the sea, the country will be establishing a new capital in the East Kalimantan province. Construction will last a decade and the cost of the move is estimated to be $34 billion.

In recent years, Jakarta’s rapid growth has prompted concerns with regards to sustainability. According to the United Nations, the overpopulated capital—which contains 60% of the country’s population—has 10 million residents and 30 million live in the greater metropolitan area. Paired with the fact that it lies on swampy ground, sits adjacent to the Java Sea, and is being severely affected by an over-extraction of groundwater, it’s no surprise that a report from World Economic Forum showed that it’s actually one of the fastest-sinking cities on Earth. Additionally, traffic congestion has led to air pollution so intense that some of Jakarta’s residents have filed lawsuits. 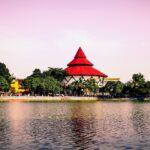 “The most ideal location of the new capital city is North Penajam Paser Regency and part of the Kutai Kertanegara Regency in East Kalimantan,” Widodo said Monday. While plans to make a capital transfer were announced in April, no specific location was declared. Reports claim that the decision was finalized after a thorough study was conducted and Widodo reviewed and confirmed the city to be the new capital “some time ago.”

Construction on the location is set to begin in 2020, and the Indonesian government is reportedly expected to begin moving its 1.5 million civil servants to the new area in 2024. “The burden Jakarta is holding right now is too heavy as the center of governance, business, finance, trade, and services,” said Widodo, who also claimed that the location is very strategic. The new (currently jungle-covered) area is nearly four times bigger and its population density is 38 times lower than Java’s, the island on which Jakarta is located. Though conservationists are skeptical as the number of incoming people could affect the area’s rainforest habitat and its wildlife, the Indonesian government says it plans on building a green city that will be friendly to the environment.

Is Jakarta…Going to Be Okay?

This move will hopefully relieve some of the literal pressure that’s being put on Jakarta. Additionally, a $40 billion outer sea wall that’s being built along the Jakarta Bay will (ideally) both help with flooding caused by rain and create a sort of lagoon that will help lower water levels so the city’s rivers can properly drain. But just in case those things don’t work, here’s why you should maybe go sooner rather than later: Jakarta is an astounding city with lots to see and experience, including a thriving restaurant, bar, and club scene plus a host of museums and landmarks (like the Textile Museum and the towering National Monument) that preserve its history. 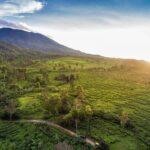