These are the essential foods to try in Java, Indonesia.

Java may only be Indonesia’s fifth largest island by mass, but it’s the most populated island in the country. Once dominated by Hindu and Buddhist empires from the 8th century, the culture shifted to an Islamic sultanate in the 16th century, followed by the Dutch colonial period. The Javanese ethnic group now makes up the largest population on the island (and the country), residing primarily in Central and East Java. In West Java, you will find Sundanese people, as well as the Betawi people (an ethnic group from Jakarta). The various ethnic groups on the island, along with historical influences contribute to Java’s rich culinary traditions. In between exploring Java’s temples, crater lakes, and 45 active volcanoes, spend some time exploring the island’s fare, starting with these 12 traditional foods. 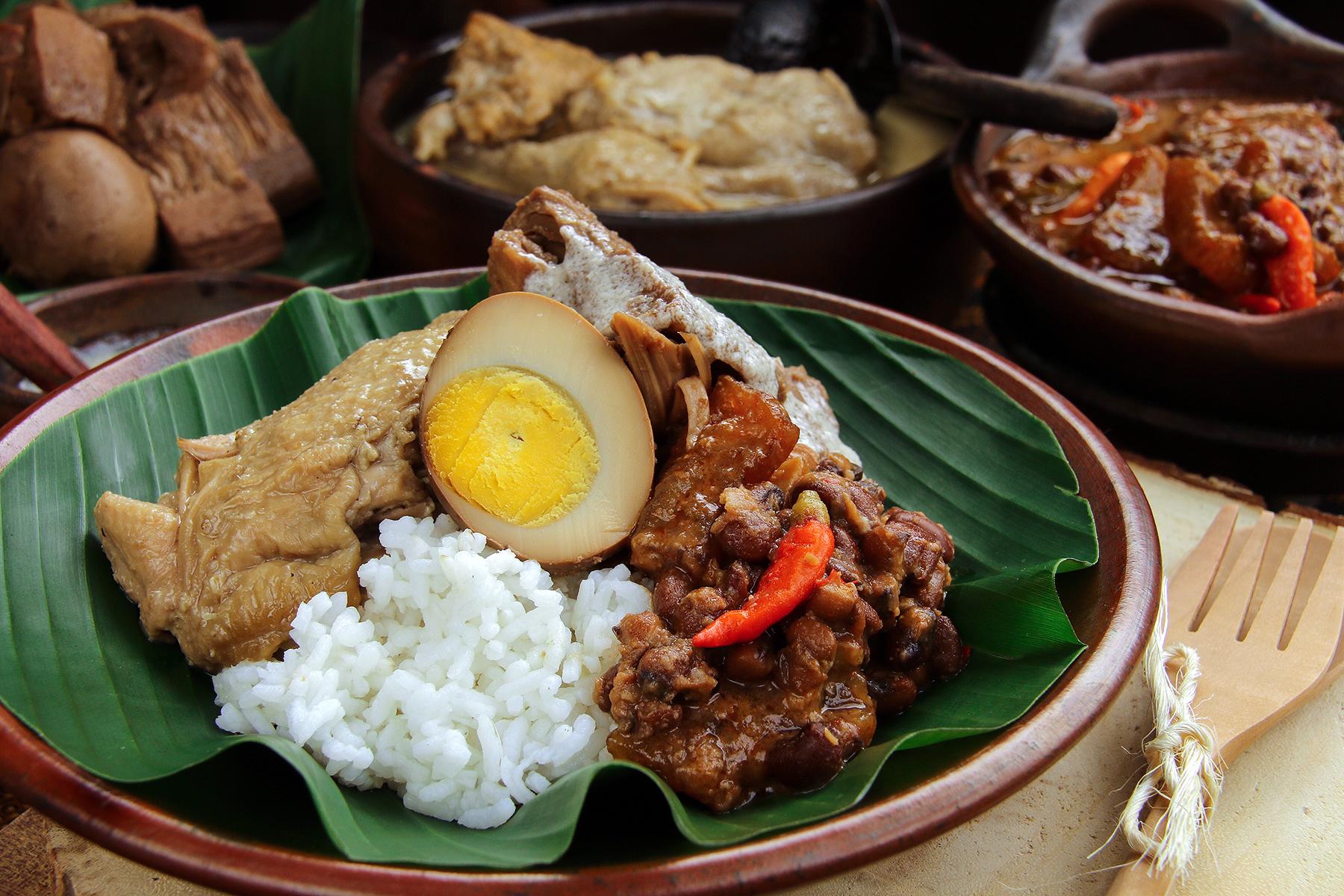 Travelers come to Yogyakarta for two things: Borobudur temple and gudeg. Gudeg is a jackfruit stew that is a regional specialty of Yogyakarta. The jackfruit stew is only one component of the dish, though. It also typically comes with chicken, marinated boiled egg, and krecek (braised beef skin). Head to Wijilan street in Yogyakarta to find rows of the best gudeg restaurants in the city, like Gudeg Yu Djum. Gudeg is so popular that some restaurants have started to can the dish to take home. 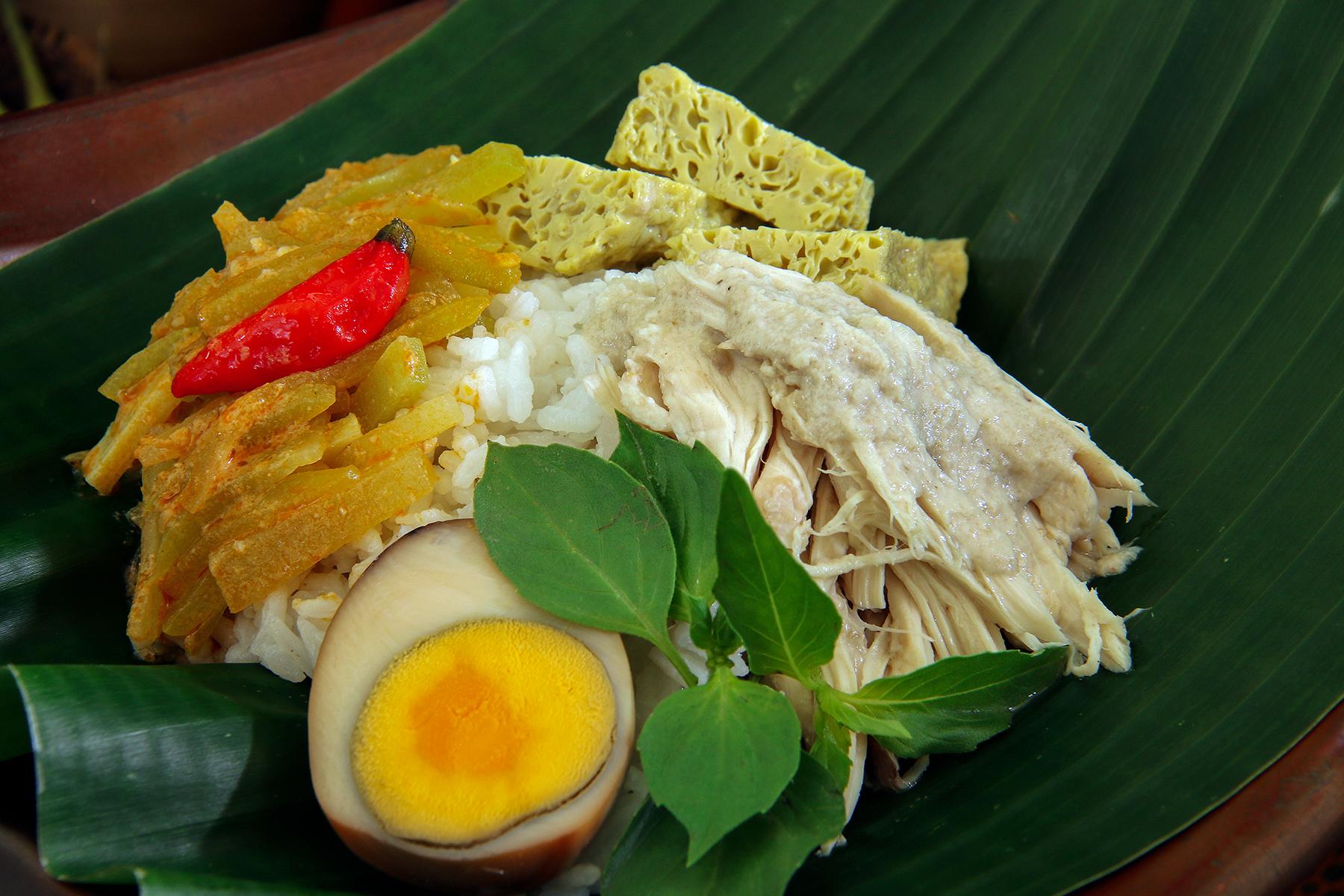 A rice dish cooked in coconut milk, chicken broth, and spices, nasi liwet is a must-have when you are traveling to the city of Solo in Central Java. Stroll into a lesehan, an eatery where diners sit on woven straw mats instead of chairs and eating with your hands is encouraged. The toppings that accompany this fragrant rice vary by the restaurant but typically include at least shredded chicken and hard-boiled egg. One of the most popular spots is Nasi Liwet Bu Wongso Lemu, which has been open since the 1950s. 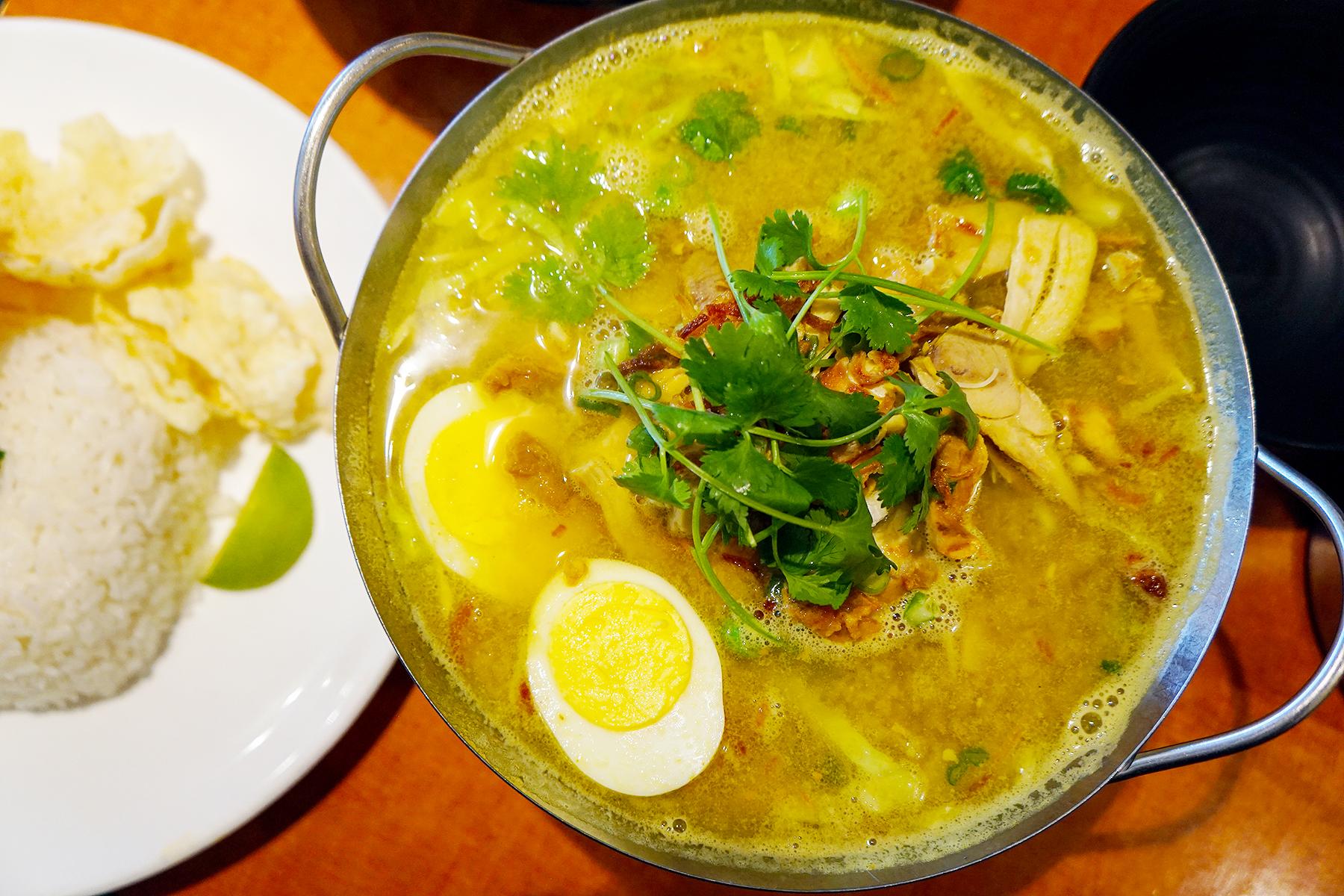 Several cities have their own versions of this yellow turmeric chicken soup. One of the most popular, however, is the Soto Ayam Ambengan from Surabaya in East Java. To have a taste, head to Soto Ayam Ambengan Pak Sadi Asli or Soto Imam Bonjol. Customers can choose the chicken parts they want in the soup, which is served with rice, egg, and cabbage. For a true Surabaya-style soto, don’t miss adding a spoonful of koya, a seasoning powder made with grated coconut, crushed shrimp chips, and garlic. Pecel is a traditional Javanese “salad” made of various boiled vegetables with a spicy peanut sauce. It’s typically made of spinach, bean sprouts, and cucumber and dressed with a peanut sauce mixed with chili pepper, galangal, kaffir lime leaf, and other seasonings. Sometimes eaten with rice cakes called lontong, pecel can be found at most traditional eateries in East Java, but the city of Madiun is most famous for this dish. Try it at Pecel Yu Gembrot, a third-generation restaurant that has been in business since before Indonesia’s independence. Not traveling to Madiun? They’ve also opened locations in Yogyakarta and Malang. 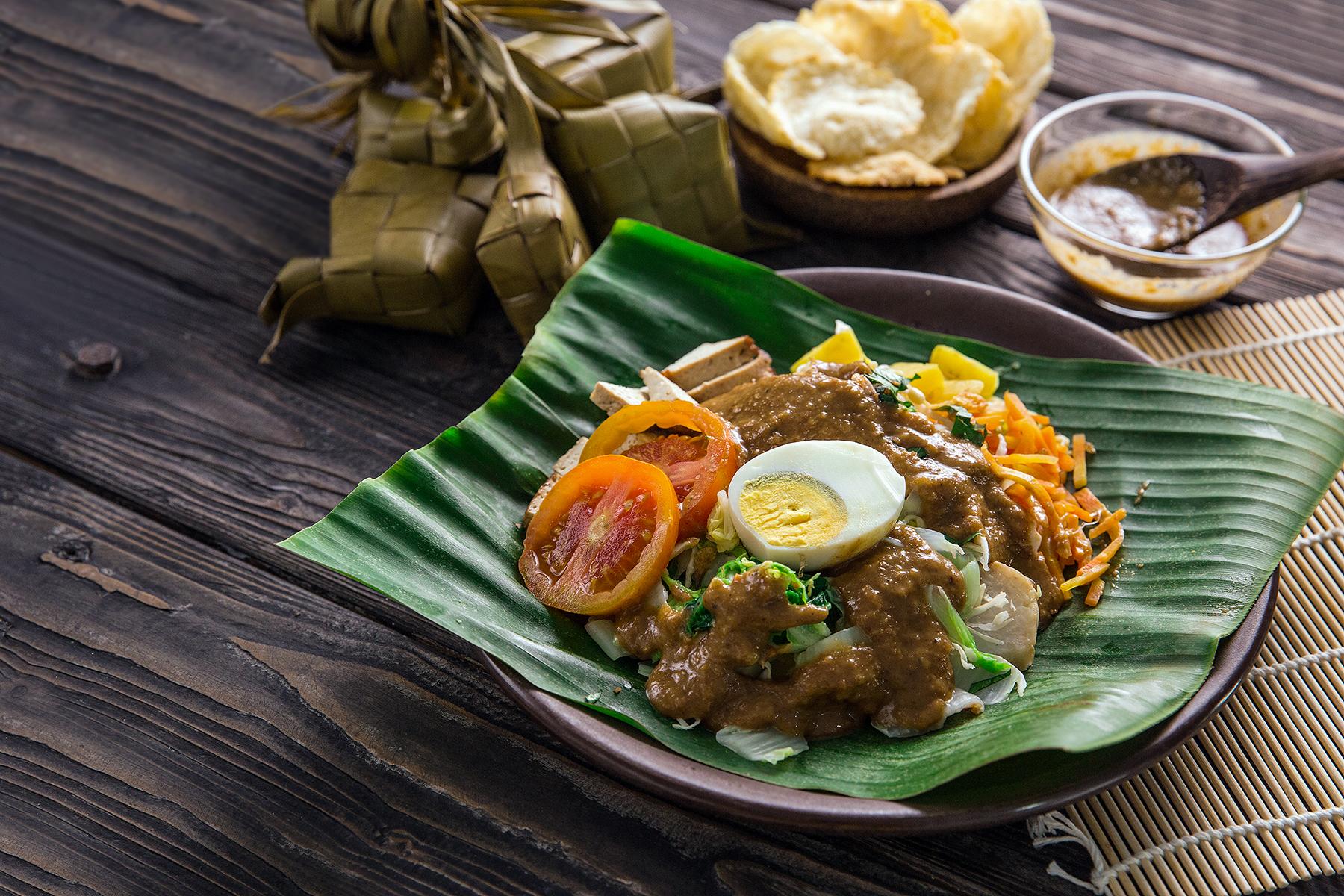 While pecel is the Javanese “salad,” gado gado is a similar dish associated with the Sundanese culture of West Java. Sundanese food typically has a simpler flavor profile and highlights fresh ingredients. Gado gado is usually made of tofu, spinach, bean sprouts, hard-boiled egg, and potatoes and topped with a peanut sauce mixed with tamarind and palm sugar. Gado gado is widely available around the country, but since it originated in West Java, be sure to try it at one of Jakarta’s legendary spots like Gado Gado Cemara, open since 1947. 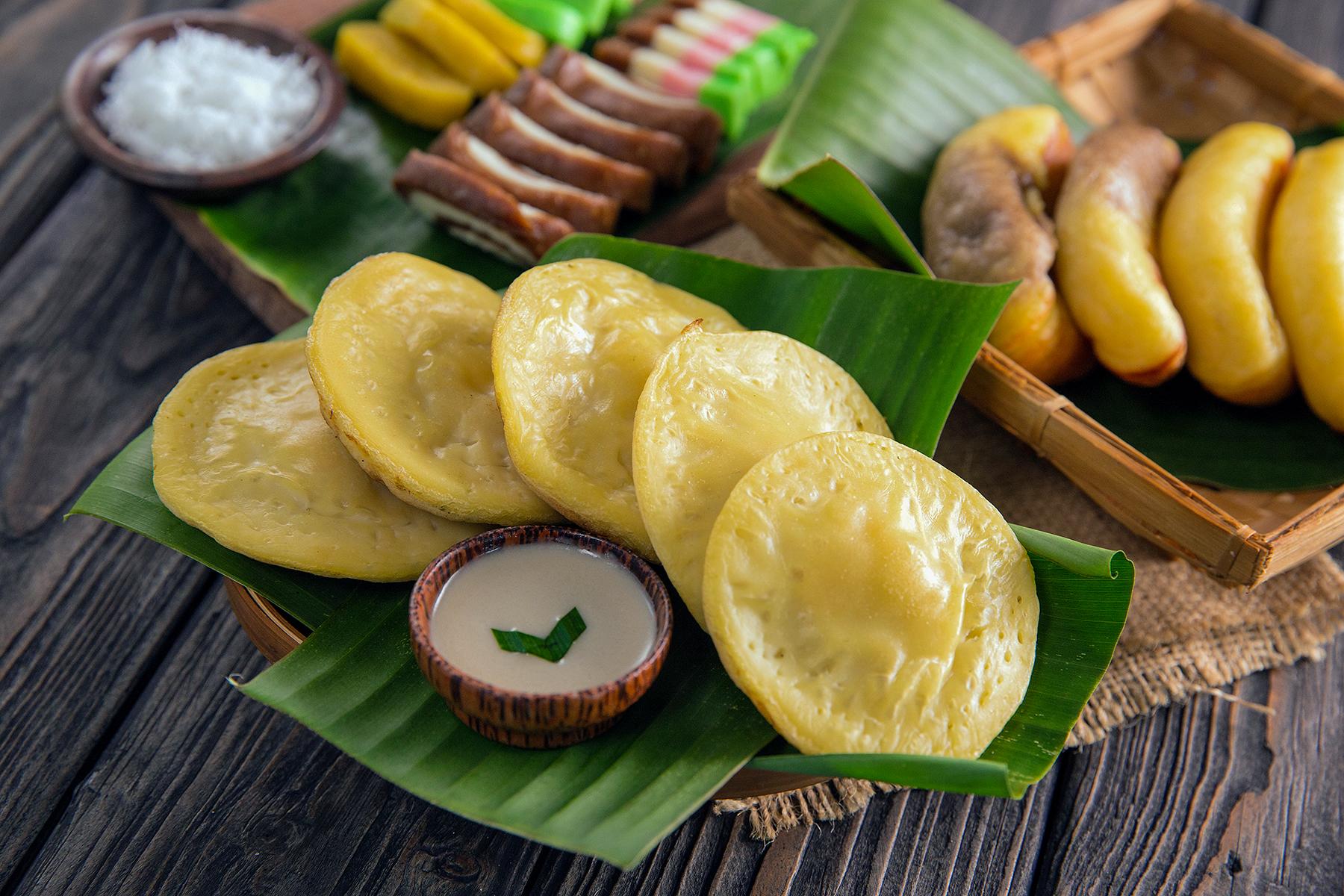 Serabi (sometimes spelled surabi or soerabi) is a type of coconut pancake that originated in Java, and is cooked in a clay pan over charcoal. Traditionally eaten for breakfast, serabi is now a popular snack, especially in Bandung and Solo. In Solo, you will find a more traditional preparation topped with coconut sugar syrup, while many serabi shops in Bandung, like Waroeng Setiaboedhi and Soerabi Kang Sena, offer various modern toppings including cheese and chocolate. 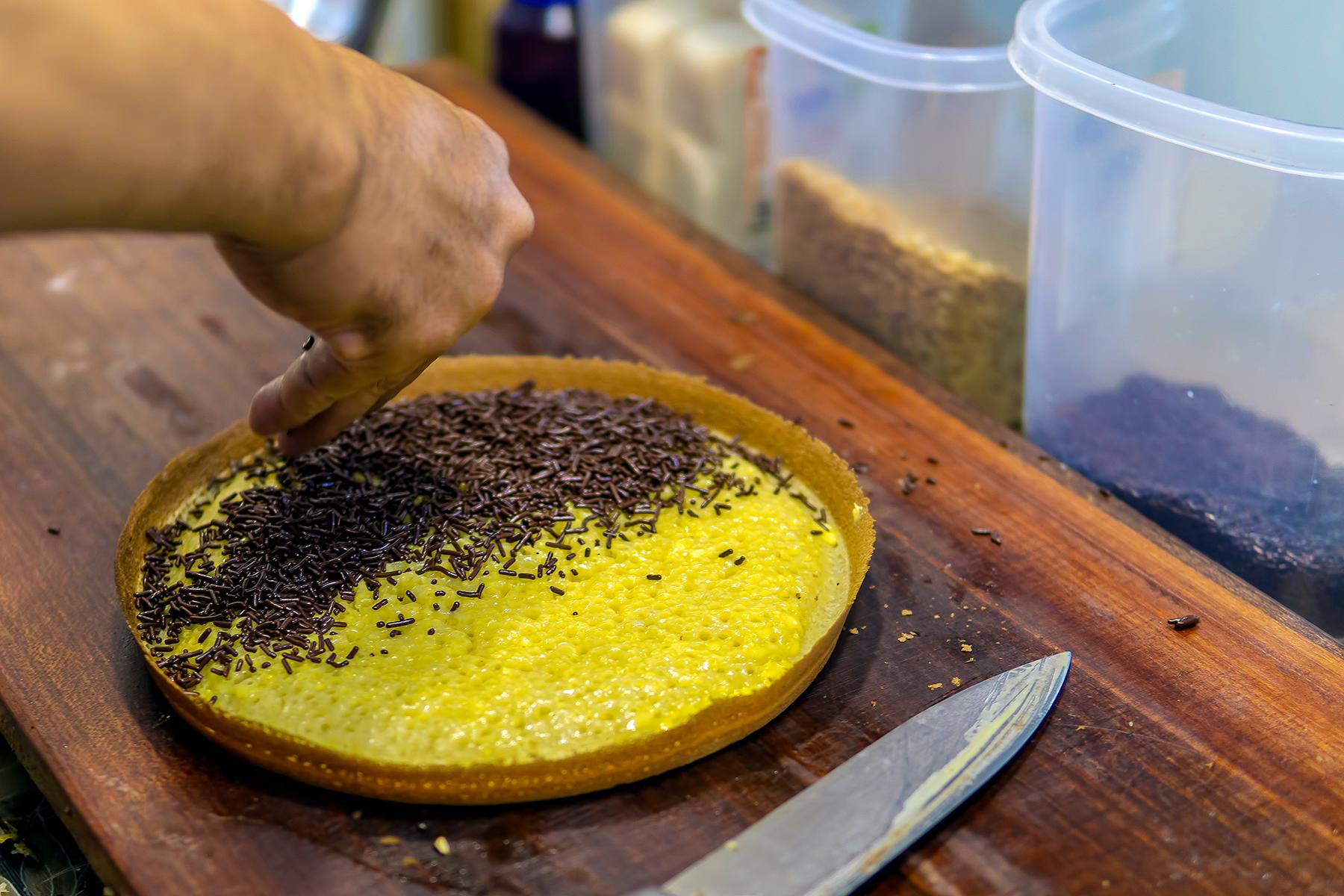 Known as martabak manis (sweet martabak) in Jakarta and terang bulan elsewhere, this filled pancake is a traditional dessert that’s popular in Indonesia, Malaysia, Singapore, and Brunei under different names. The folded pancake is cooked on an iron pan and traditionally filled with peanuts as well as cheese and chocolate sprinkles (thanks to the Dutch influence in Indonesia). It was commonly sold at street stalls, but larger cities like Jakarta and Surabaya have recently seen a resurgence with new spots incorporating hip ingredients such as red velvet and Oreos, as seen in martabak shops such as Martabak Boss in Jakarta and Martabak Mafia in Surabaya. 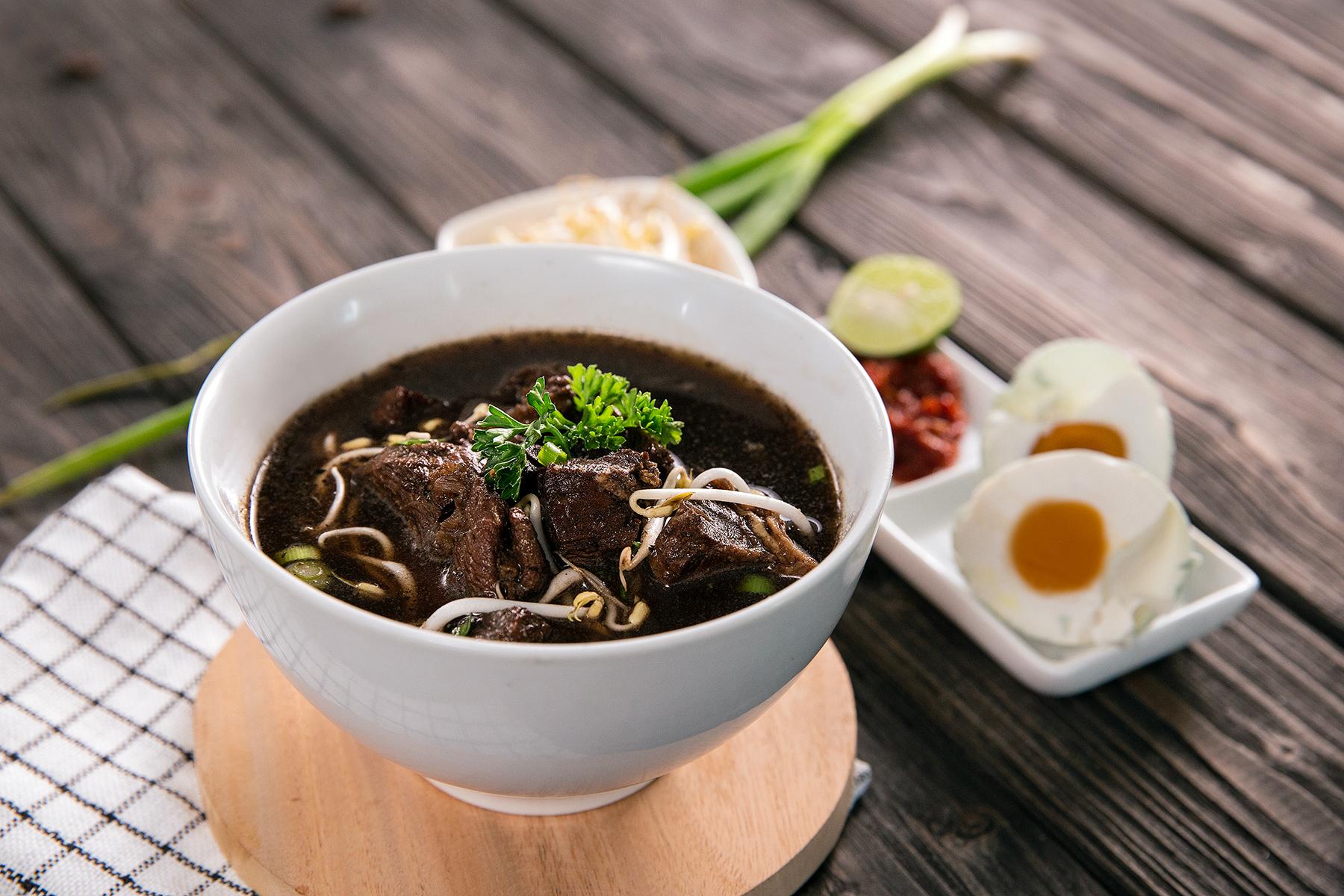 This black beef soup gets its color from the keluak nuts (Indonesian black nuts), which are used as the main seasoning and give the soup its deep nutty flavor. The soup originated in Surabaya, where tourists and locals continue to frequent the most popular shop, Rawon Setan. The name translates to Devil’s Rawon, referring to the late night hours the shop keeps. There are also a number of frequently sought out rawon shops in the nearby highland city of Malang, like Rawon Brintik. 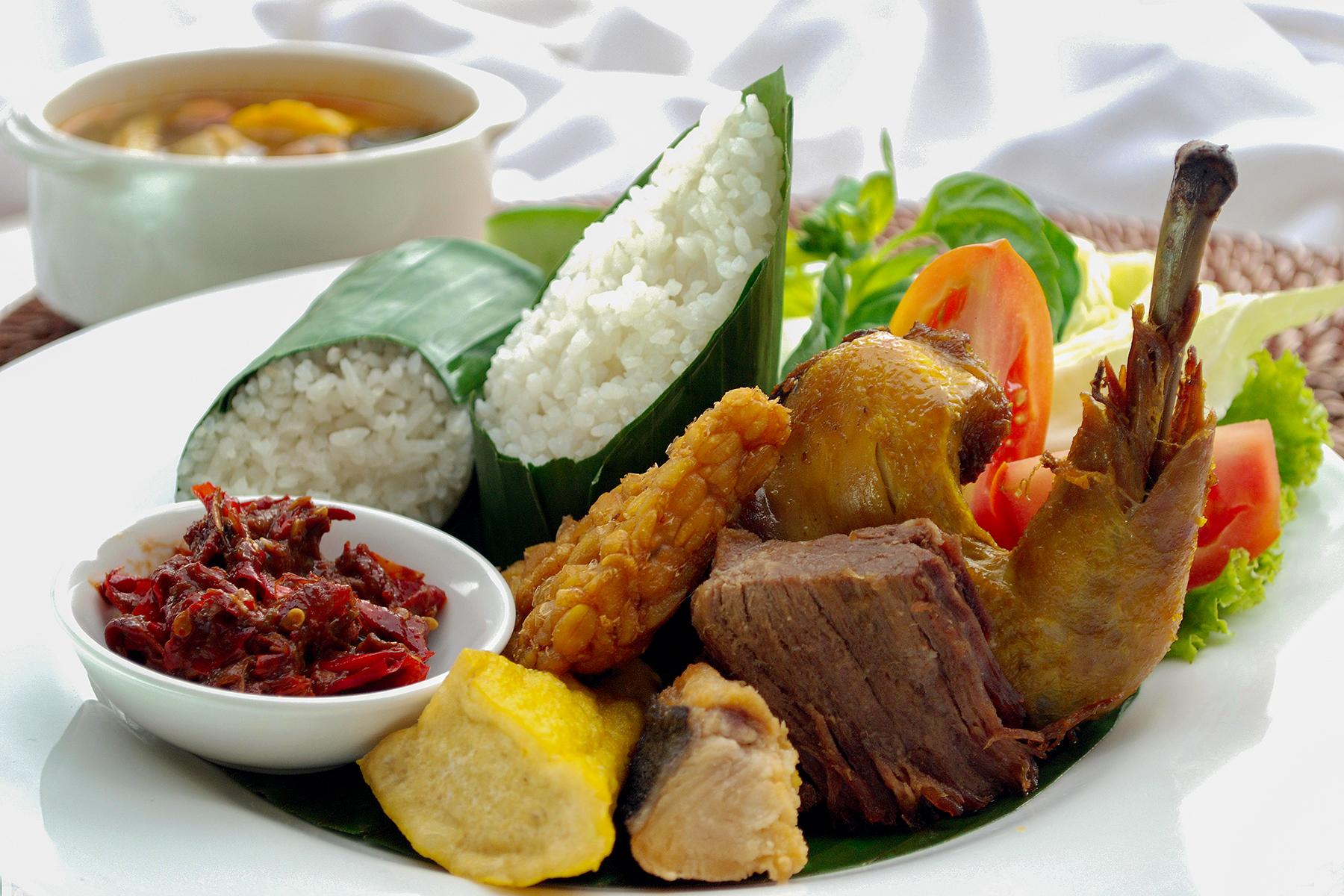 For this Sundanese meal, hot steamed rice is wrapped in banana leaves for a unique fragrance. At Nasi Timbel Parahyangan in Jakarta, the rice is then served with a variety of side dishes such as fried chicken, tempeh, and tofu. You can also try it while dining in teak bungalows surrounding a waterfall at Resto Gurih 7 in the highland city of Bogor or at Kampung Daun in Bandung. Look for a variant called nasi bakar, which takes it a step further by grilling the banana leaf-wrapped rice for a stronger aroma. 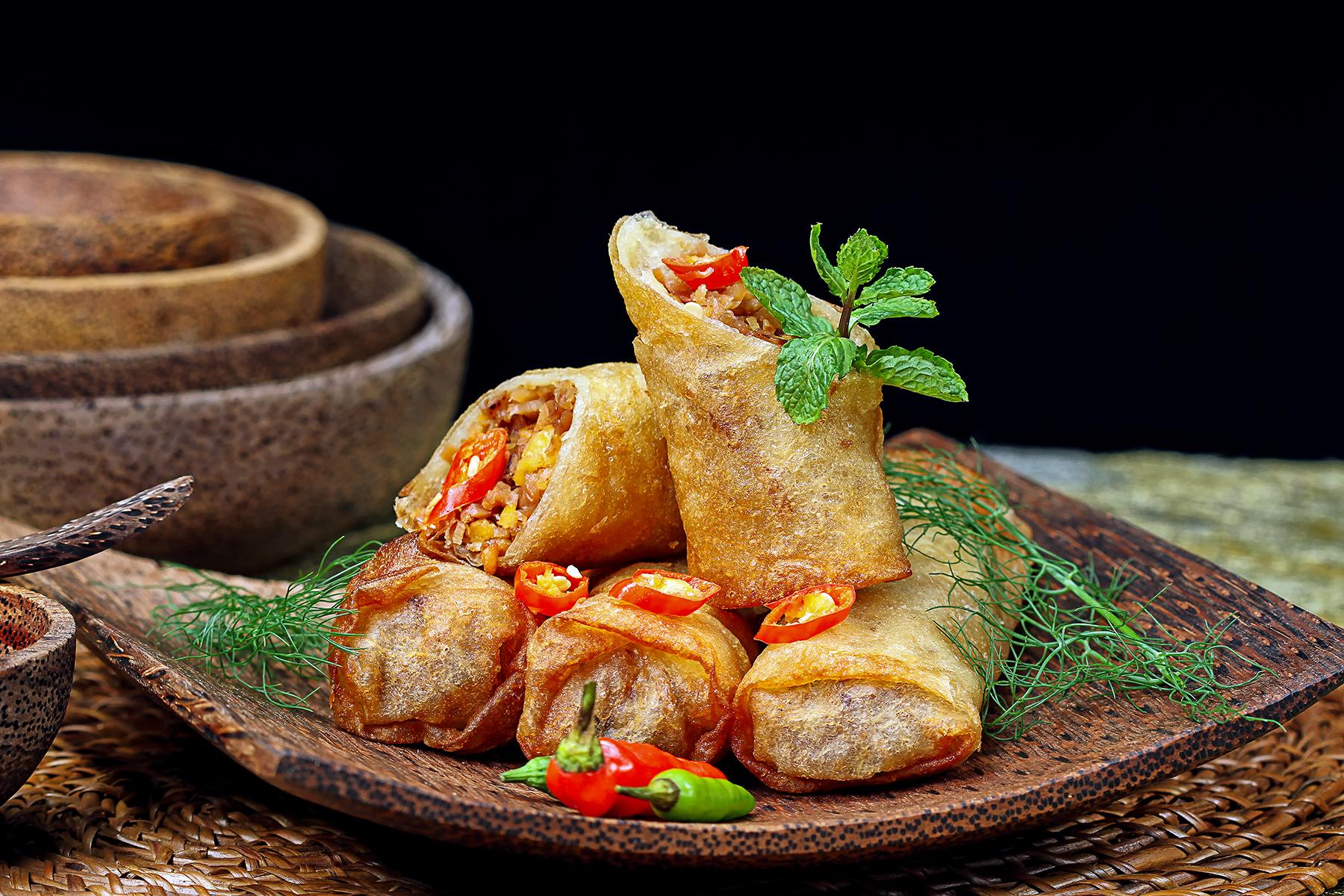 While you can find lumpia, or egg rolls, all over Indonesia as well as the Philippines, the most famous lumpia in Indonesia is from the city of Semarang in Central Java. The lumpia in Semarang can be deep-fried or served un-fried (“wet”), but what makes this dish special is the filling, made of bamboo shoots, dried shrimp, chicken, shrimp, and scrambled egg. Visitors often bring lumpia from Semarang home as souvenirs for friends and family, which comes vacuum-packed at shops like Lunpia Cik Meme. 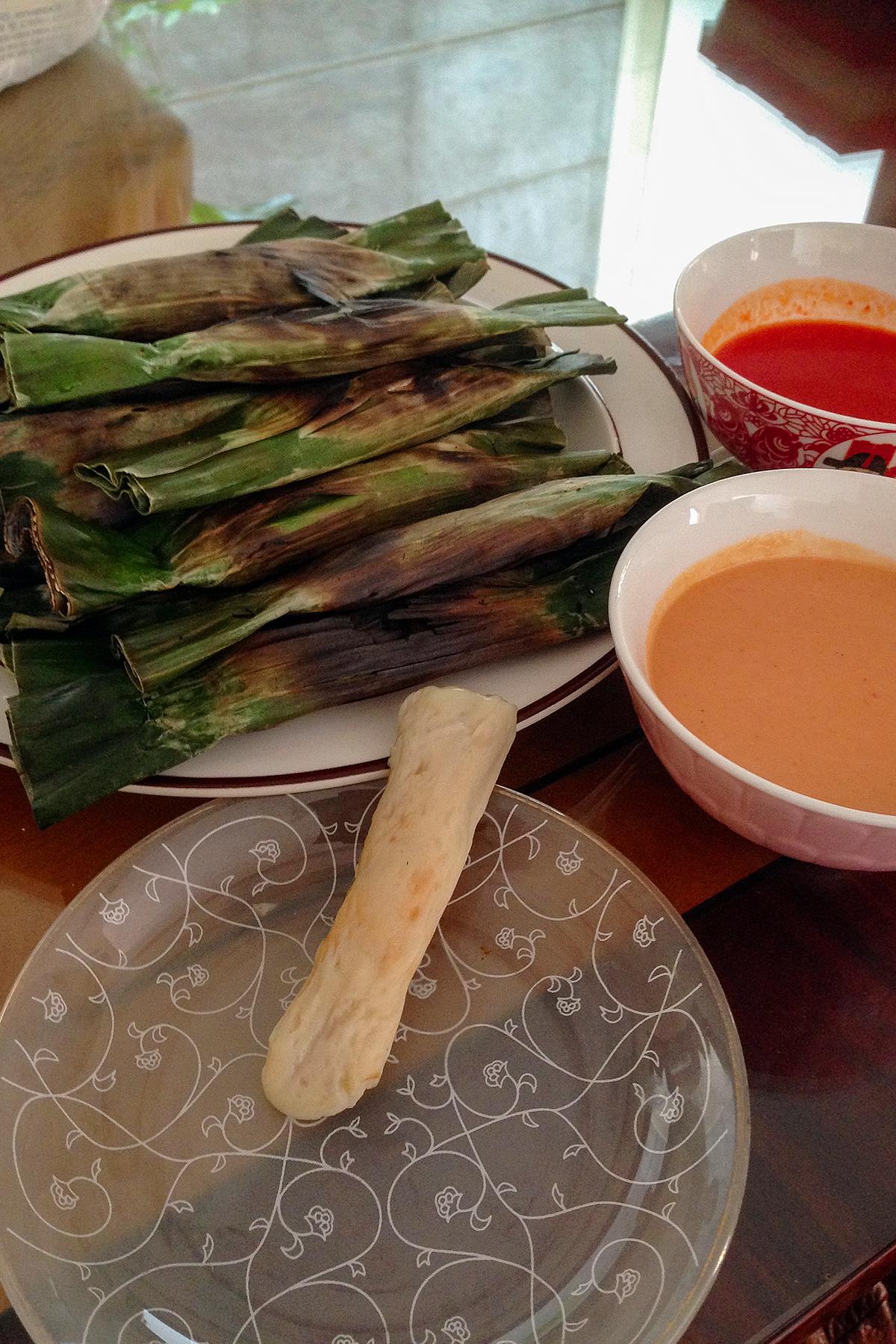 The name otak otak literally translates to “brain brain,” but there’s no brain involved here. Otak otak is actually a spiced fish cake that is wrapped in banana leaves and grilled over charcoal. The fish meat is mixed with coconut milk, tapioca starch, and spices. In Jakarta, otak otak is dipped in a spicy peanut sauce and eaten as a communal snack. Try some from Otak Otak Ny Elly in Jakarta. 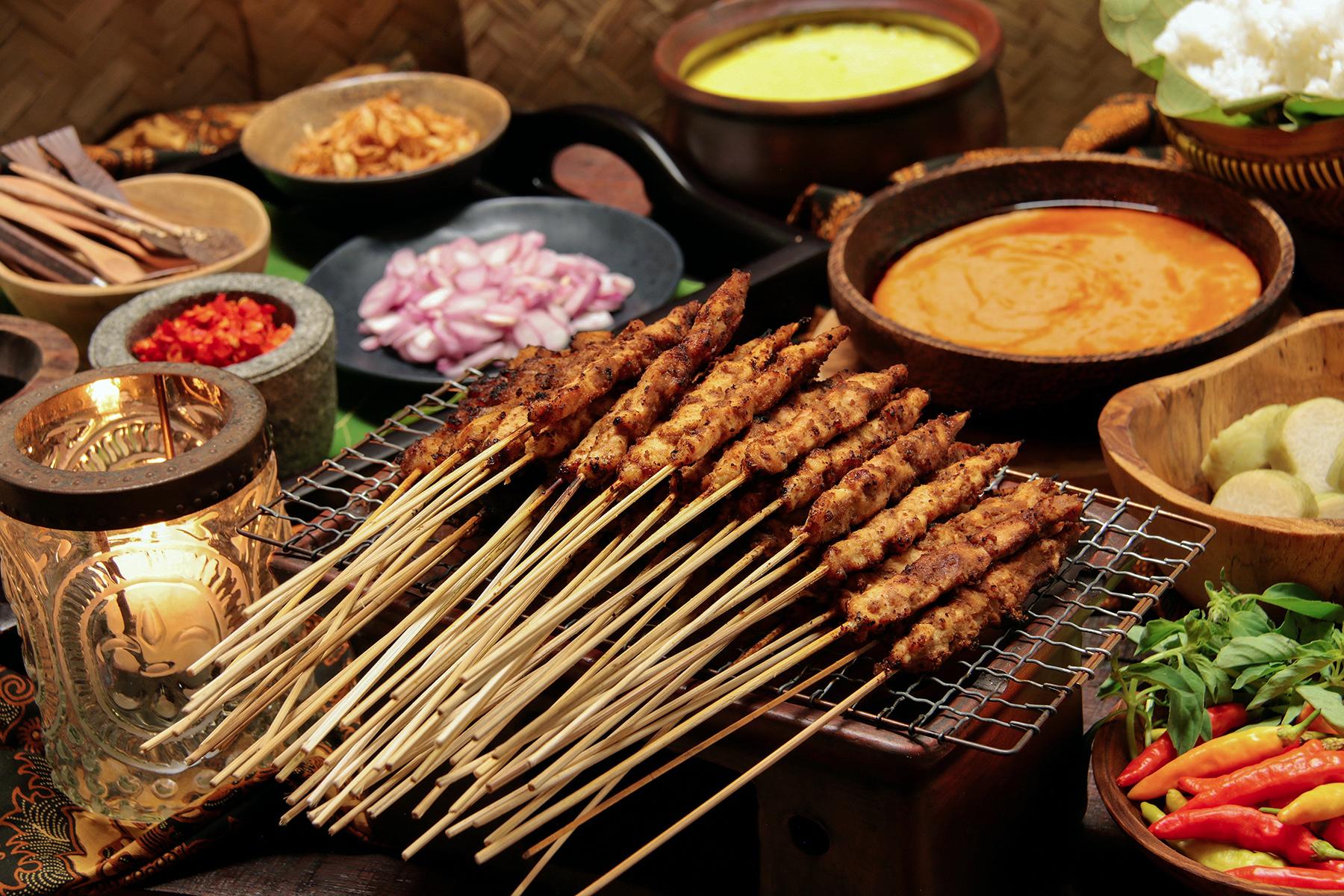 While sate, or meat skewers, are common around the country and all over Asia, each region has its own specific style. Sate is especially popular in Java (in fact, the governor’s office building in Bandung is known as Gedung Sate or Sate building because the pinnacle on its roof resembles a meat skewer). The most common sate is chicken sate and in Java, the meat is traditionally marinated in sweet soy sauce and then served with a peanut dipping sauce. A recently popular version is sate taichan, a white chicken meat skewer served with a spicy and sour sauce. Try some at G Walk in Surabaya, a late night food complex with many eateries including Saporo Suroboyo Sate Ayam and Sate Taichan Nyot Nyot.