From 7th-century rock-cut temples and colonial-era buildings to the oldest bookstore in India, Chennai’s eye-catching architecture is teeming with history

Chennai is one of India’s largest metropolitan cities. And yet, not many travelers make it a point to venture out to the coastal city when exploring India. In reality, Chennai—or Madras, as it was formerly known—is a lively hotspot of arts, culture, commerce, and cuisine, and offers an entirely different experience when compared to other parts of the country. And with the newly inaugurated metro, it’s even easier to get around.

Owing to its geographic location, Chennai has been a major economic and political center for thousands of years. Today, you’ll spot various examples of stunning Indo-Saracenic architecture from the colonial era standing alongside ancient temples, modernist buildings, and crowded commercial centers.

Here are 12 architectural sites in the capital of Tamil Nadu that are visually spectacular and packed with historical significance. 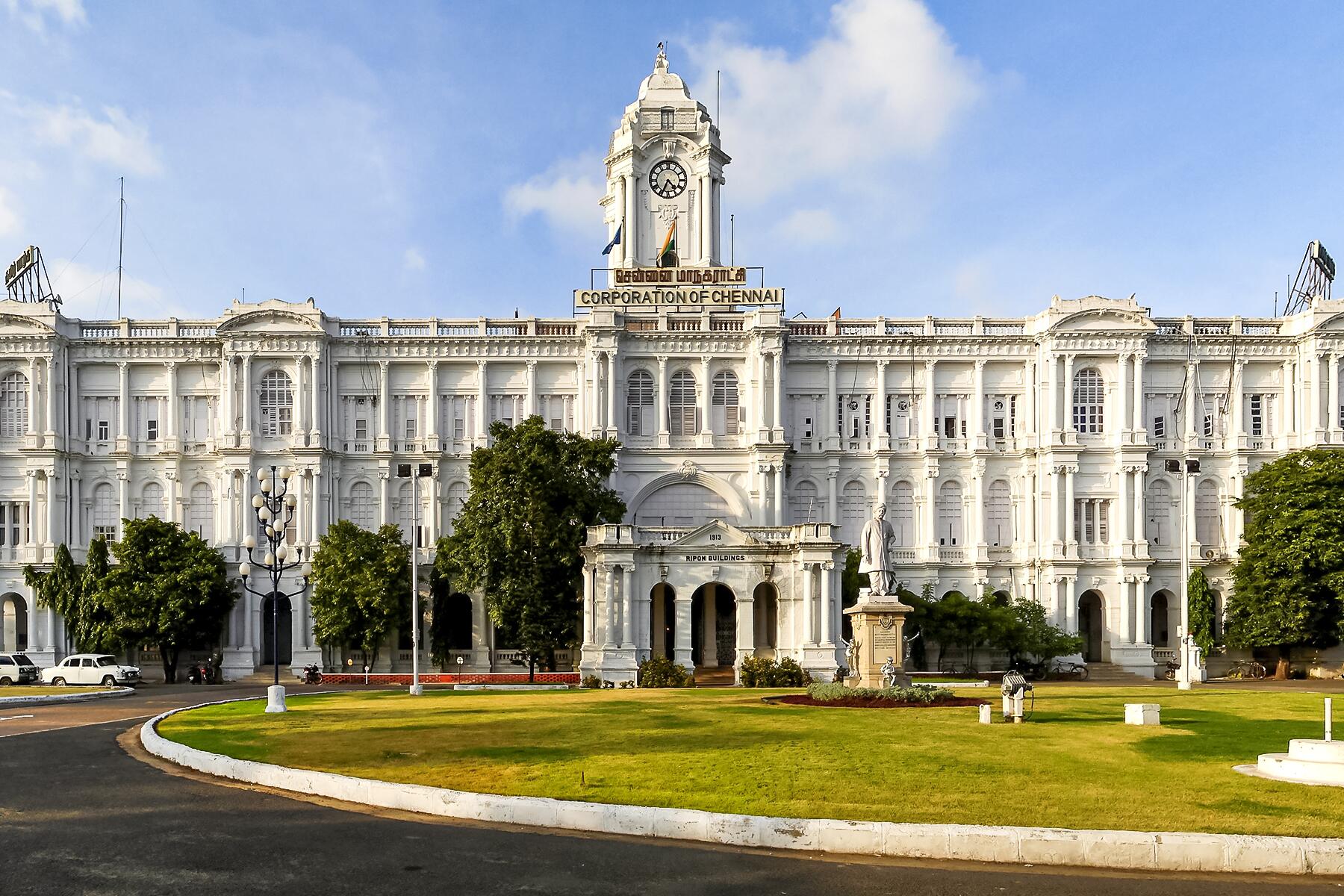 Not too far from the Chennai Central railway station stands the Ripon Building. It’s named after Lord Ripon, Viceroy of British India from 1880 to 1884 who drew much adulation from Indians—and provoked his countrymen’s ire—for his liberal policies and reforms. The heritage building’s looming façade is a salient example of Neoclassical architecture, and its inauguration in 1913 was a big affair that drew the who’s who of then Madras.

Today, the Ripon Building houses administrative offices of the Corporation of Chennai, so tourists aren’t typically allowed to enter. But it’s worth visiting just to admire the view from the outside as you drive past it on the busy Poonamallee High Road. 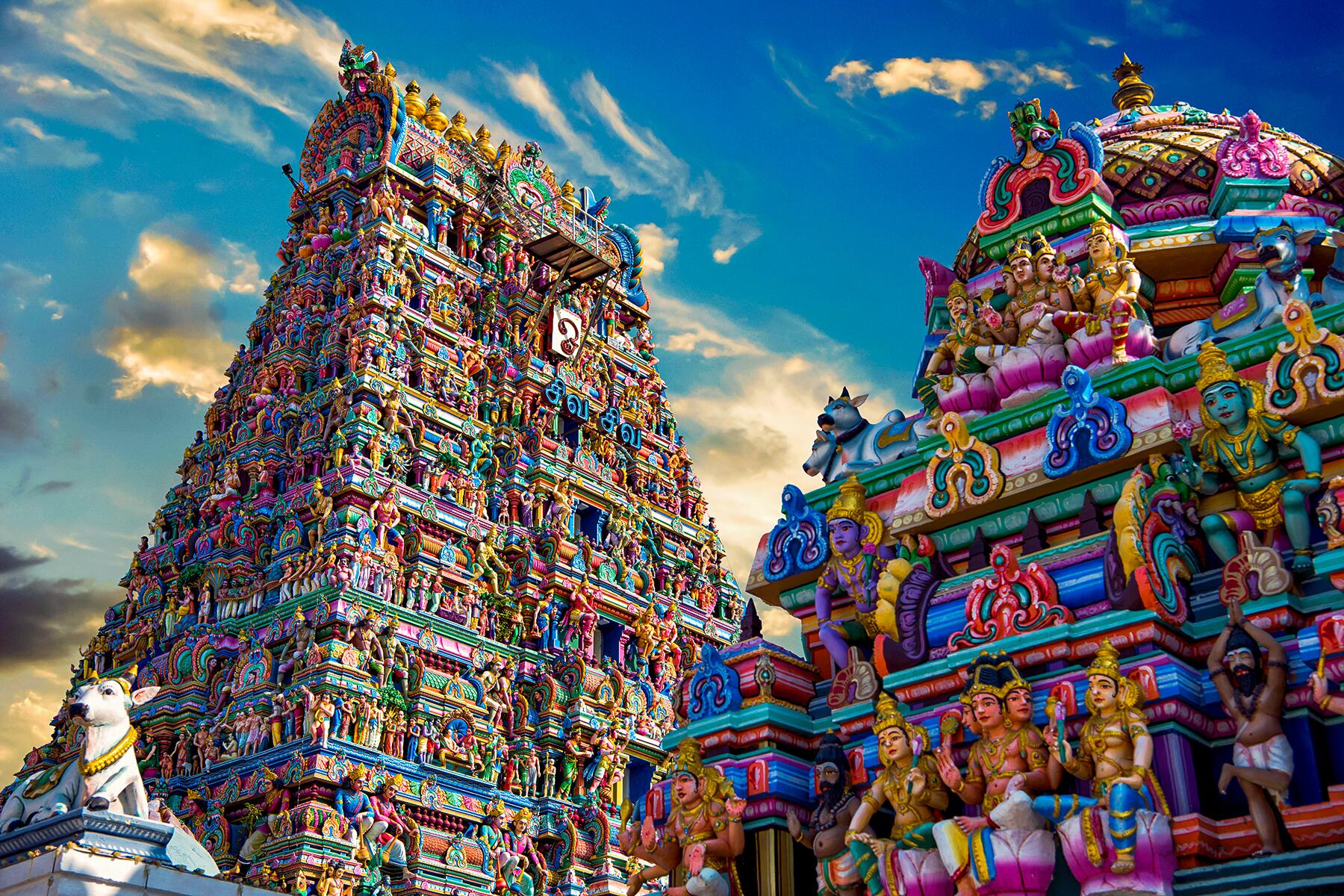 Chennai is home to numerous Hindu temples that trace their origins as far back as the Pallava dynasty in the 7th and 8th centuries. Among the most famous and oldest of these are the Kapaleeshwarar Temple, constructed in Dravidian-style architecture featuring an ornate gopuram or entrance tower, and the Parthasarathy temple, where the 7-day Teppothsavam or float festival takes place every year.

While everyone’s welcome to visit, just remember to dress modestly and remove your shoes before entering a temple.

INSIDER TIPFor a truly local experience, join in the special festivals that take place at various temples during the most auspicious times of the year, such as the Panguni Peruvizha (Spring festival). Dates and event info can generally be found through the official websites of temples or a general Google search. 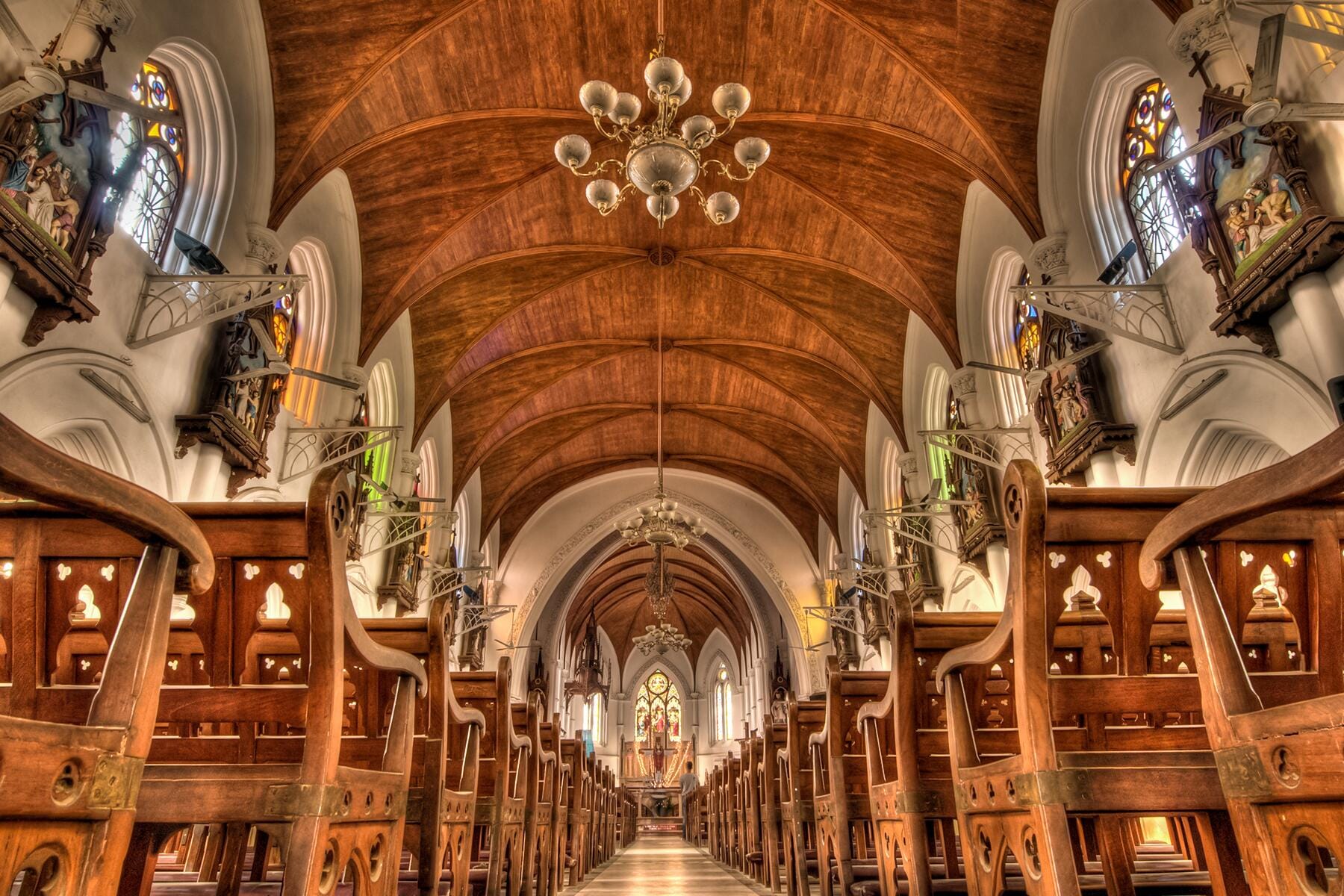 Portuguese colonial rule in India lasted from the turn of the 16th century until 1961, although it was largely confined to isolated colonies for much of that time. In Chennai, Portuguese explorers constructed the St. Thomas Cathedral Basilica or Santhome Church in the 16th century. Legend has it that the church was built over the tomb of Saint Thomas. According to Christian tradition, the Santhome Church is one of only three churches in the world—the others being Spain’s Santiago de Compostela Cathedral and St Peter’s Basilica in the Vatican—that stand on the tomb of an apostle of Jesus. In 1893, it was rebuilt by the British as an all-white neo-Gothic cathedral that continues to function today.

Other prominent sites include Luz Church, which was the first church built by the Portuguese; the Armenian Church; and St Thomas Mount, where Saint Thomas is said to have been martyred.

INSIDER TIPYou can take in a panoramic view of the green city from St Thomas Mount. 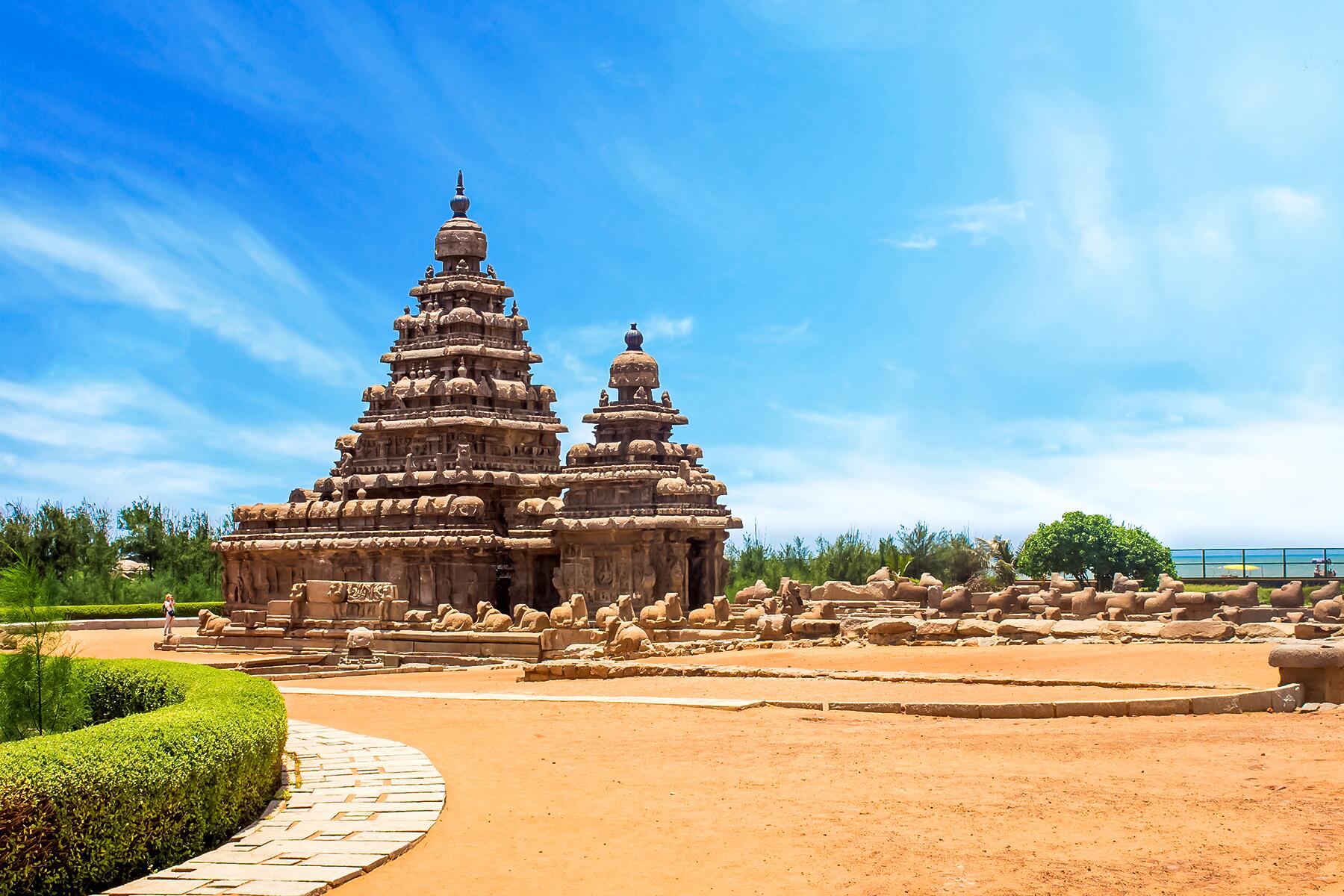 Group of Monuments at Mahabalipuram

About 35 miles south of Chennai, along the Coromandel Coast, lies the historic town of Mahabalipuram or Mamallapuram or, colloquially, as “Mahabs.” The town is home to a UNESCO world heritage site that features stunningly sculptured rock reliefs, cave sanctuaries, chariot temples and the Shore Temple dating back to the 7th century, and is a visual delight. You can reach the temple complex from Chennai by taxi/rental car or by taking an inexpensive bus to Mamallapuram town. Another good option would be to take a local train to Chengalpattu station around 15 miles away, followed by a taxi. 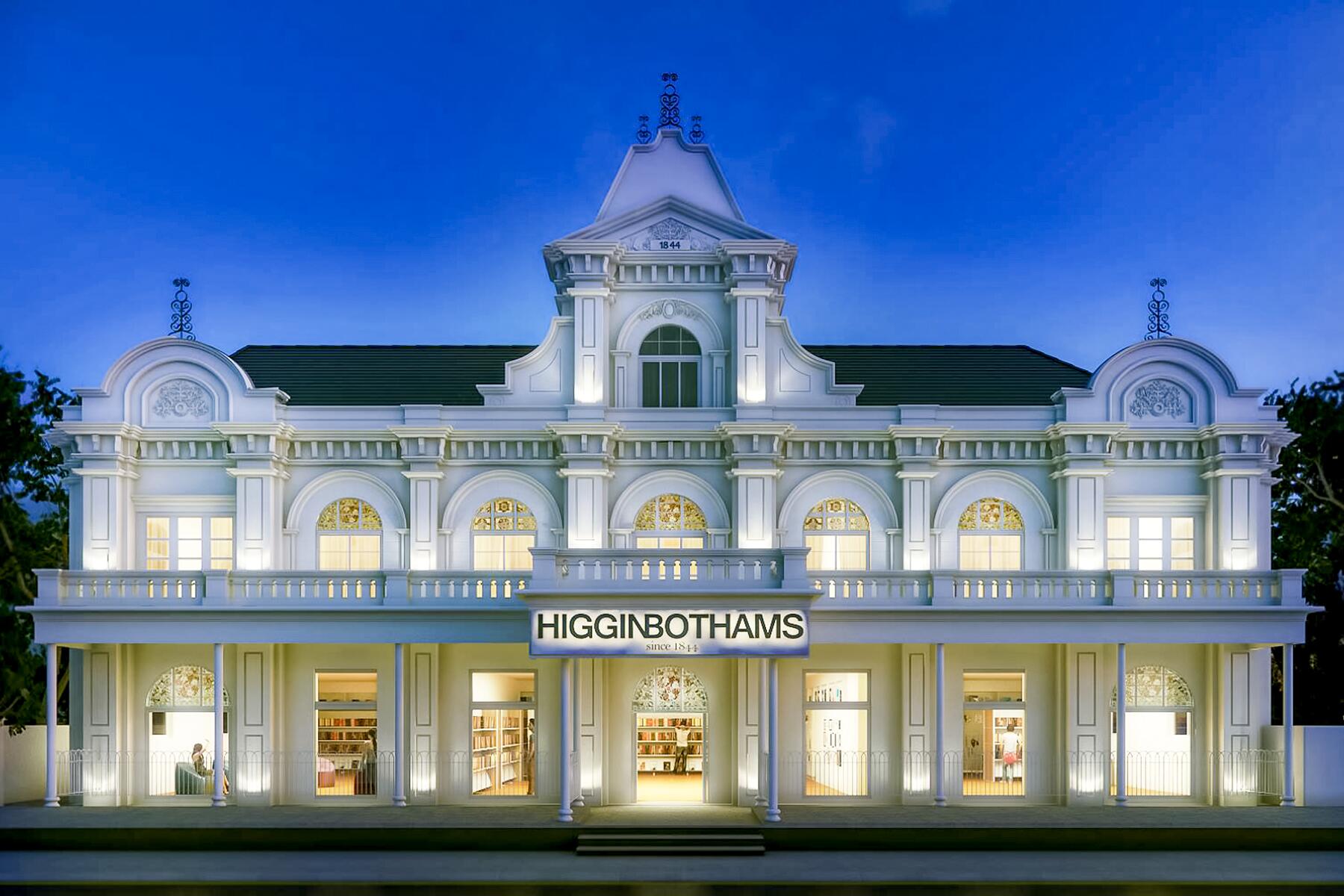 Among the things Chennai boasts about is the fact that the oldest bookstore in India is located here. Higginbotham’s was established in 1844 by Englishman Abel Joshua Higginbotham, who, incidentally, had arrived in India as a stowaway on a British ship. It moved to its current location on the arterial Anna Salai road in 1904.

Although the building has aged, the Palladian architecture—with an endearing old-fashioned sign announcing the name of the bookstore—still stands out among the surrounding structures. The interior is striking, with geometric black-and-white patterned floors, lofty ceilings, stained-glass windows, and a curved wooden staircase. Today, Higginbotham’s has several stores across South India.

INSIDER TIPJust down the road from Higginbotham’s, you’ll find The Old Curiosity Shop, a little antique store that’s worth a visit if you’re into vintage memorabilia. 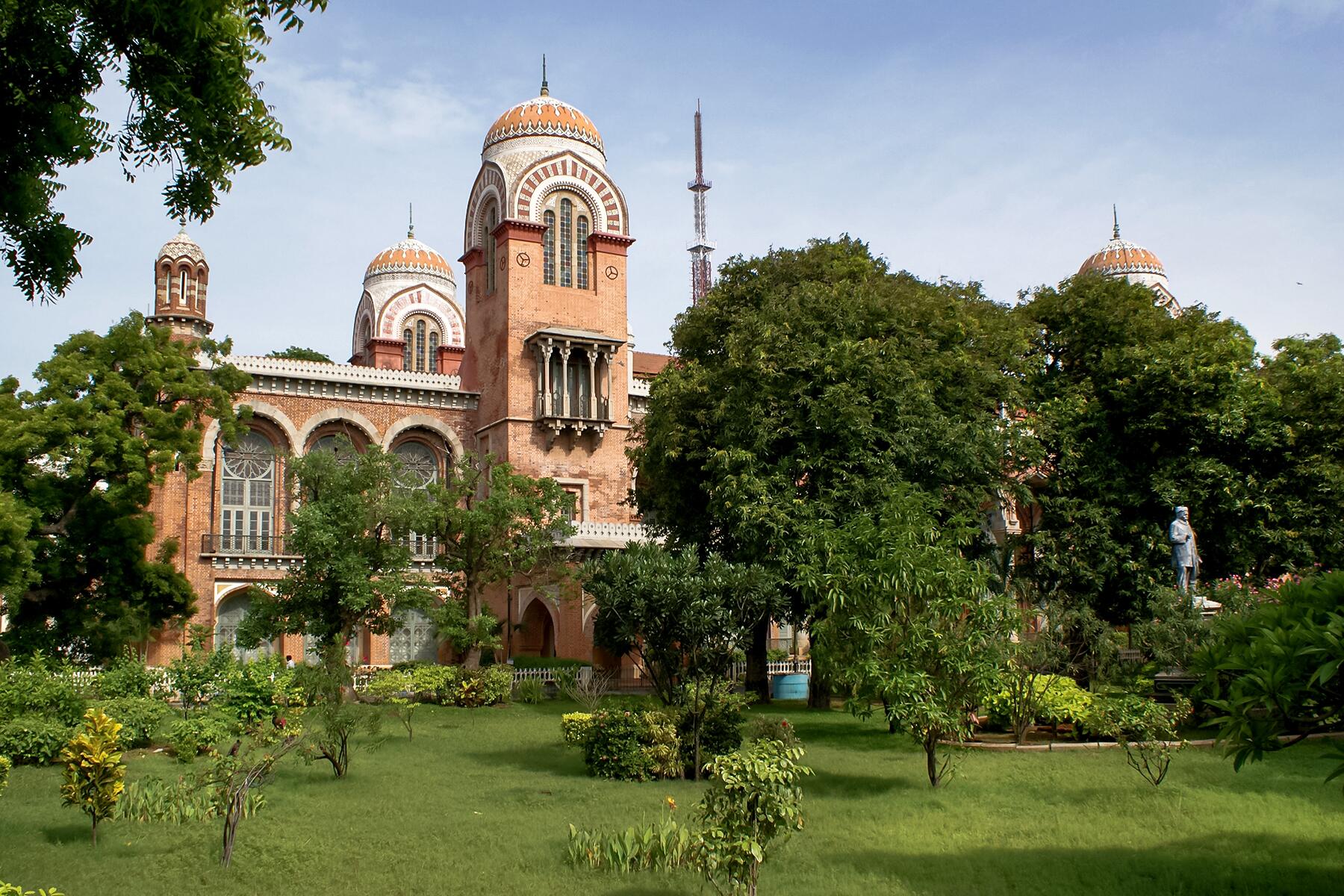 The Senate House is beautiful, particularly in its myriad details such as the exquisitely designed domes with stained-glass windows, and graceful porticos. It’s a classic example of colonial Indo-Saracenic architecture that Chennai is known for, pioneered by British architect Robert Chisholm, which incorporates Hindu, Mughal and Gothic styles. The building also features Byzantium architectural elements in its design. It was completed in 1879 and is presently located within the University of Madras campus.

INSIDER TIPThe Chennai Photo Biennale takes place at the Senate House and other locations across the city. Entry is free; check the website for dates. 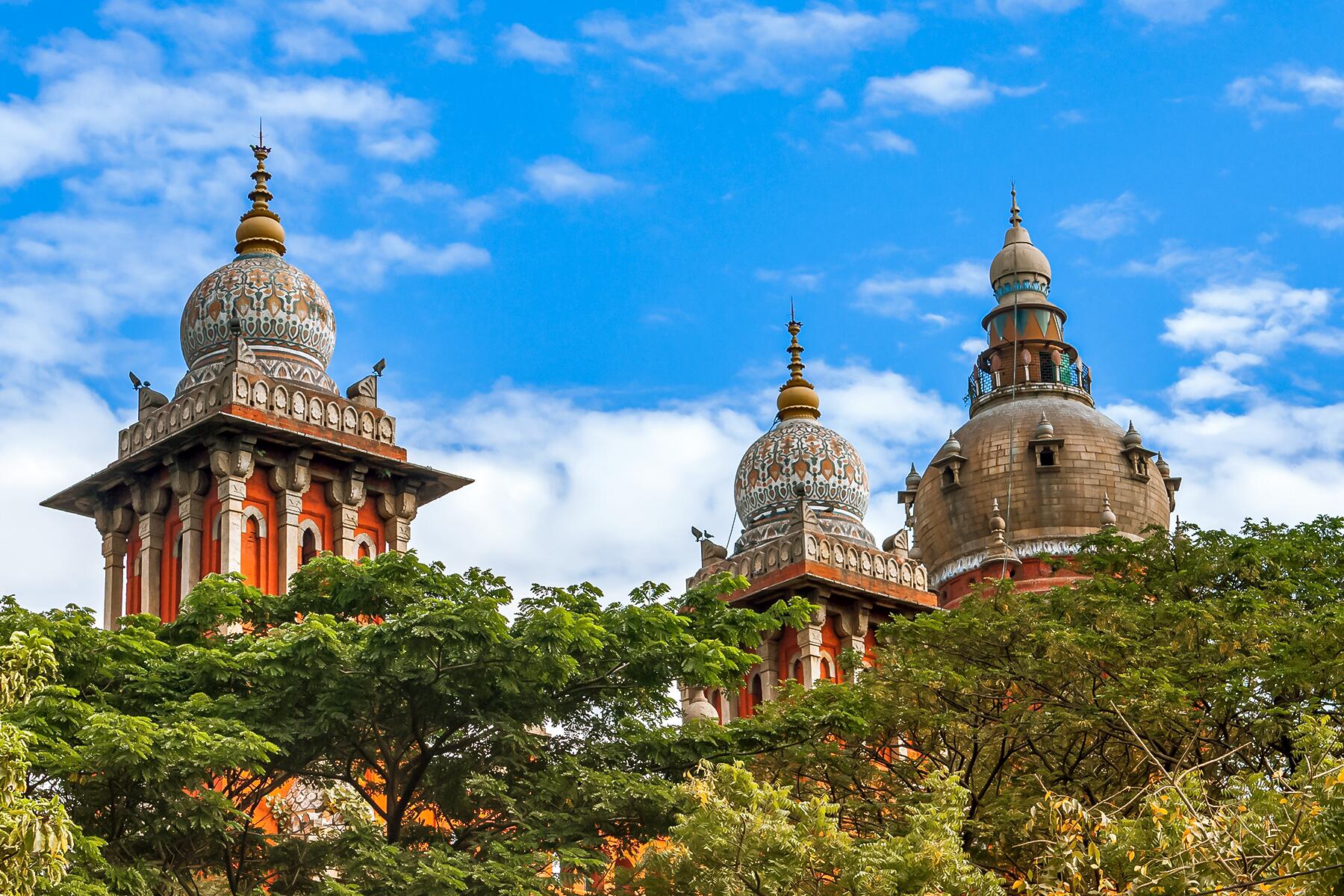 You couldn’t find a better example of exquisite Indo-Saracenic architecture than the Madras High Court, sprawled out over 107 acres of land and complete with two lighthouses. It was designed by JW Brassington and completed in 1892 by famed British architect Henry Irwin who is said to have been influenced by Robert Chisholm. The complex offers a heady mix of domes, minarets, and stained-glass windows, and the view from atop the dome overlooking the campus is spectacular. There’s also a museum that you can visit.

While you’re there, head out and explore the historic George Town neighborhood. It was the site of the earliest settlement from where the city of Madras grew, and the first English fortress in India—Fort St George—is located here. You’ll find bustling markets selling everything from textiles to electronics, as well as a mix of diverse architectural styles.

INSIDER TIPDon’t miss the Madras High Court heritage walk that takes place every second Sunday of the month! It’s free of charge and offers the chance to take a closer look at this fascinating structure. Register by getting in touch with senior advocate and author NL Rajah at [email protected] 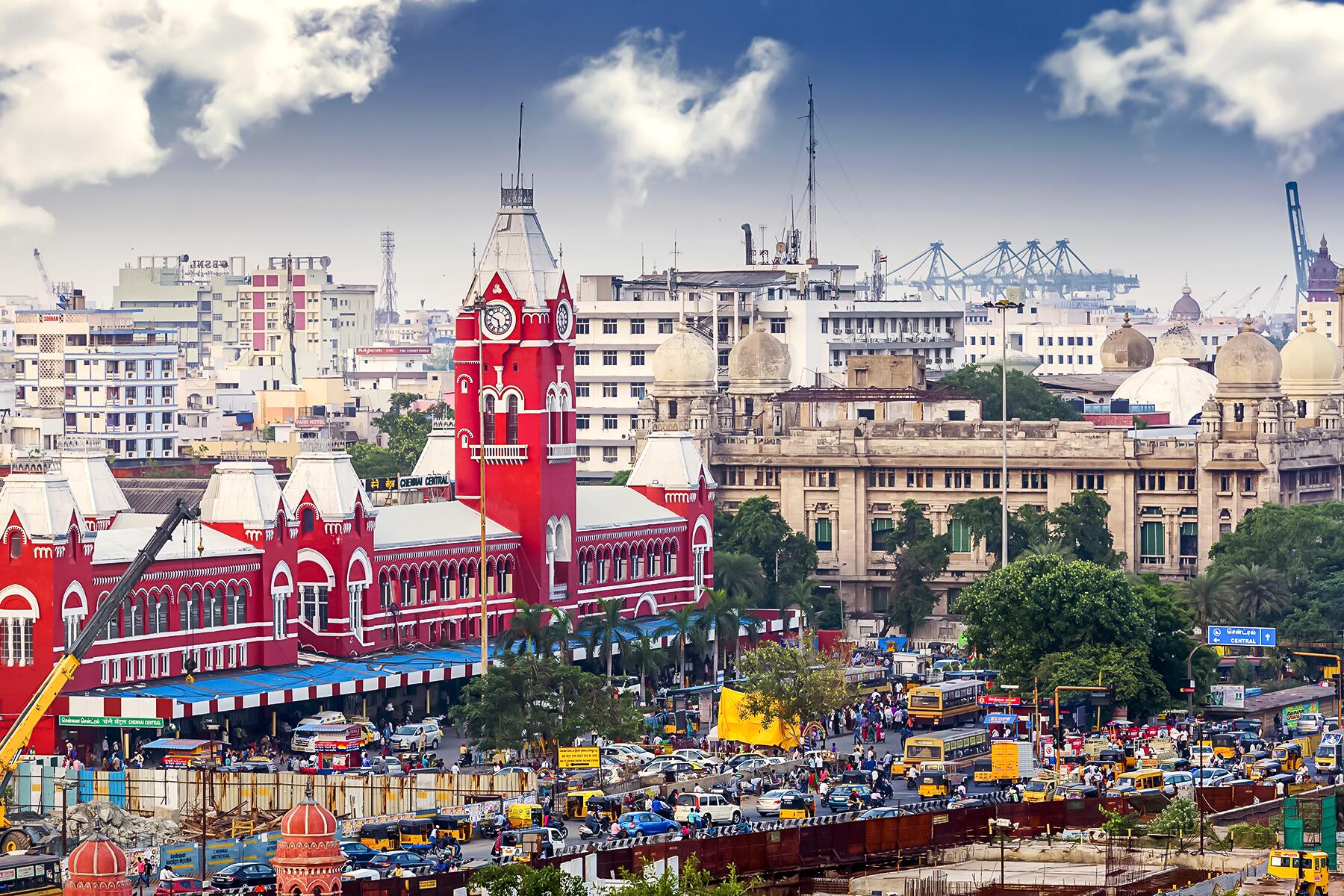 If you happen to travel to Chennai via train, you’ll arrive at an imposing brick-red structure that is teeming with passengers, vendors, and red-shirted porters hauling suitcases. Indian Railways comprises the world’s fourth-largest railway network, and Chennai Central happens to be the busiest railway station in all of South India. It was originally built in 1873 and was considered to be a ‘gateway to the south’ during the British Raj. The design of the building incorporates Romanesque and Gothic architectural styles, and the central tower complements that of the nearby Ripon Building.

INSIDER TIPTrain tickets get sold out fairly quickly. So if you’re planning to include train travel in your itinerary, it’s advisable to book your tickets well in advance using the Southern Railways online ticketing website. 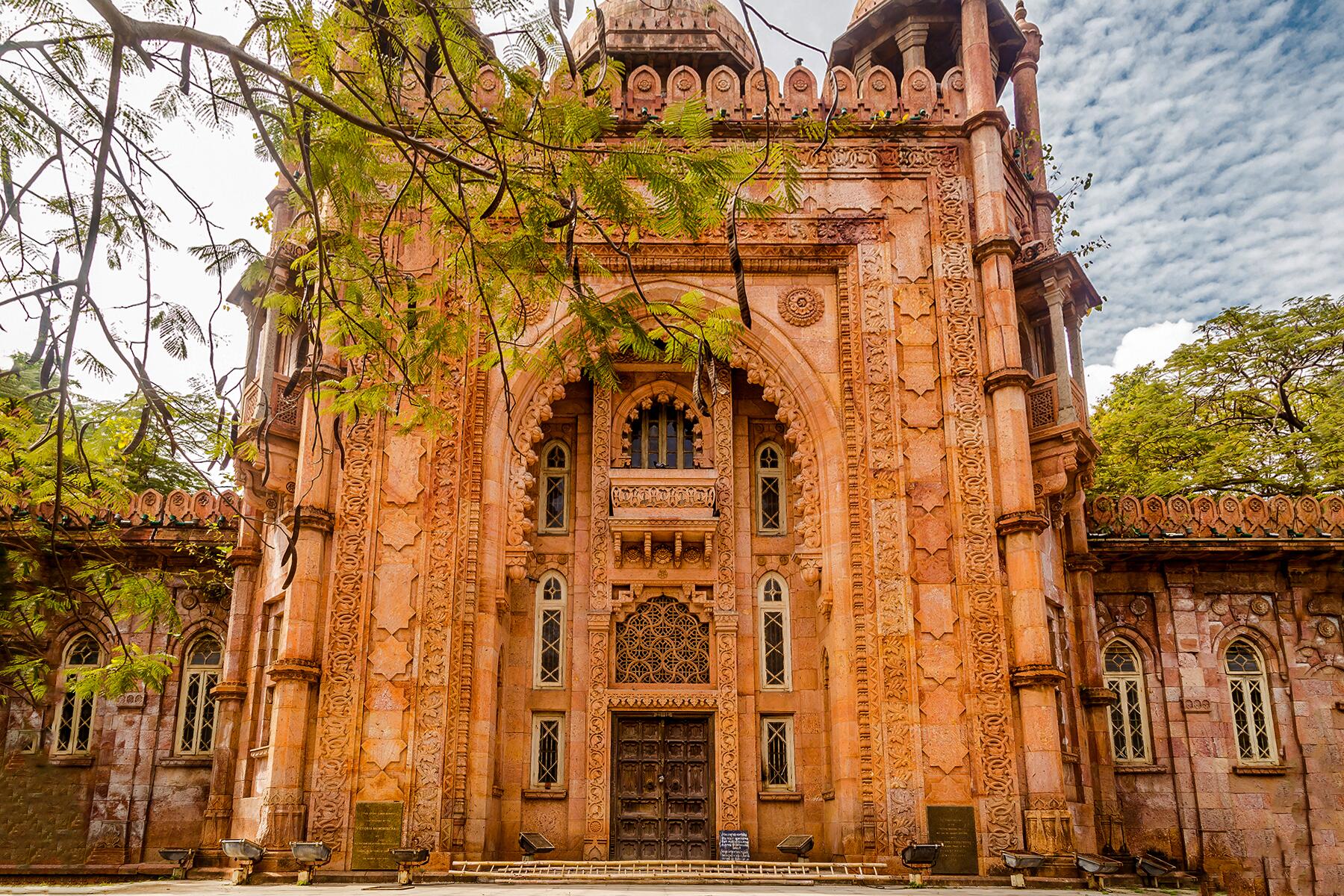 The Government Museum, established in 1851, is spread out over the 16-acre Pantheon Complex, where you’ll find a bunch of buildings including the Museum Theatre, Bronze Gallery and Contemporary Art Gallery. There are grander museums in the world, but it’s worth visiting to appreciate the varied architectural styles within the complex, such as the remarkable Italianate-style Museum Theatre and the Indo-Saracenic façade of the National Gallery of Art. What a lot of people don’t know is that the country’s second-oldest museum also houses the largest collection of Roman antiquities outside of the European continent, from way back when seafaring Romans landed in the Indian peninsula during the reign of Emperor Augustus. 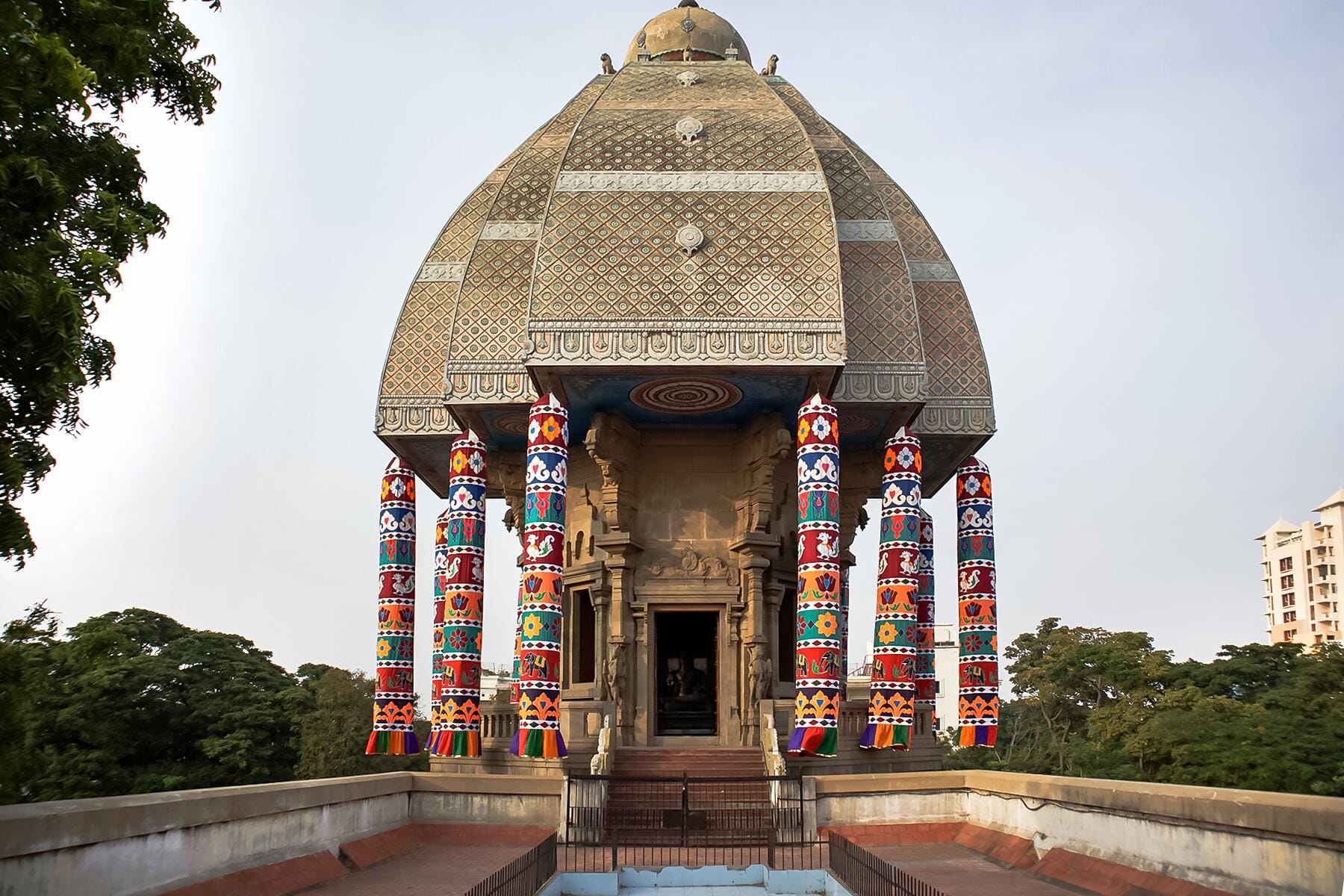 Valluvar Kottam is a site of cultural significance that was erected in 1976 to commemorate Thiruvalluvar, widely regarded as the greatest Tamil poet and philosopher. While little is known about his life- he is said to have been born sometime between 4th and 1st century BC—his legacy continues to be celebrated to this day. His magnum opus, the Tirukkural– which translates to Sacred Verses—consists of 1,330 couplets focusing on leading a life of virtue in the context of ethical, economic and political affairs.

The main hall of Valluvar Kottam has each of these 1,330 couplets inscribed on its surface, and the monument’s most striking aspect is the ornate 128-foot replica of a temple chariot containing a life-size statue of Thiruvalluvar. 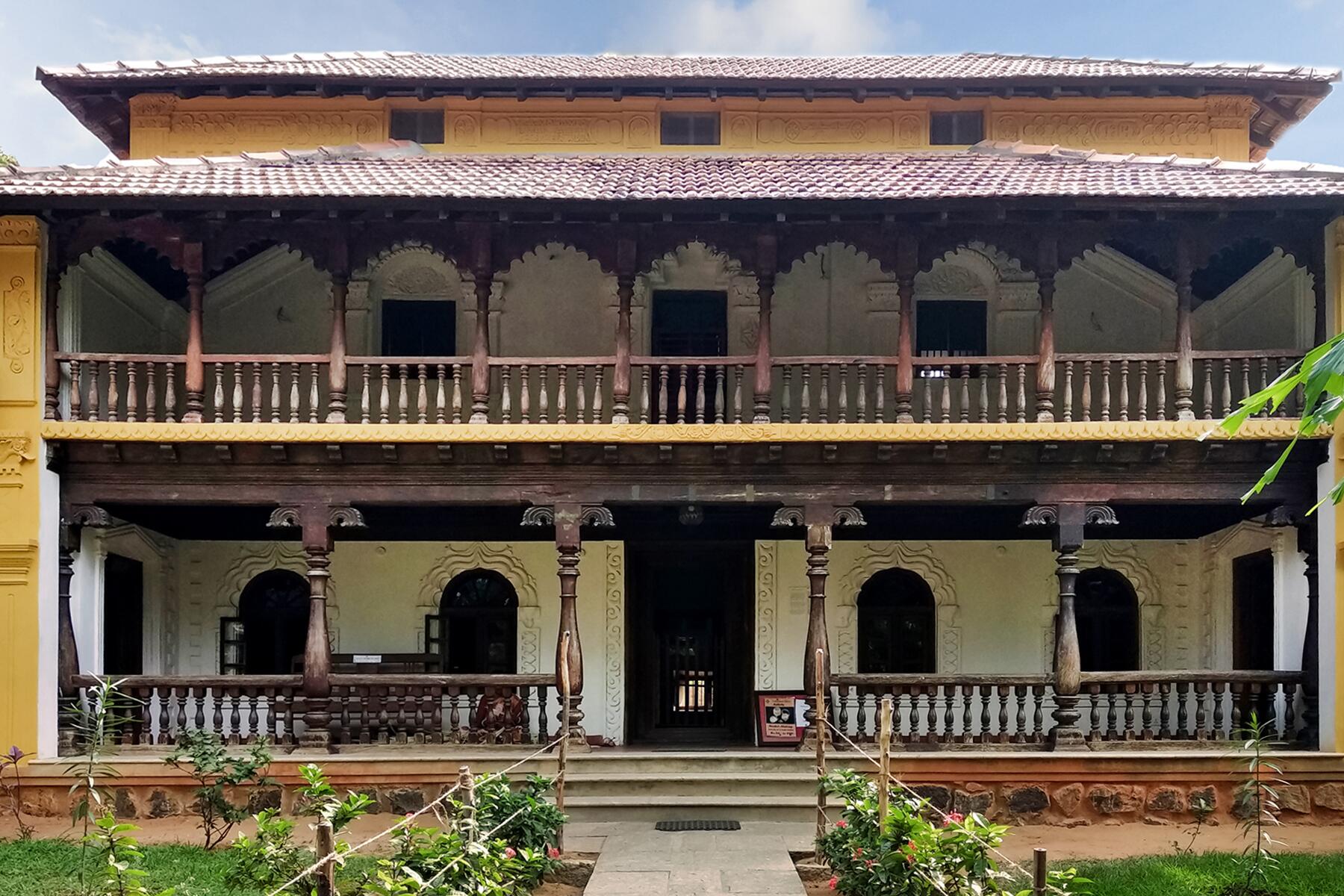 If you’re curious to understand how different communities in Tamil Nadu—and other regions of South India—lived over the years, head over to DakshinaChitra to soak in some cultural history. The open-air museum showcases various styles of houses, as well as art, local crafts, and traditional objects. The houses have been recreated in the same manner as the original structures, and consist of several elements that’ve been brought over from the original site and carefully reconstructed.

INSIDER TIPThe museum features regular traditional performances and exhibitions, so take a look at the official website to know what’s happening when planning your visit. It’s also a good place to pick up souvenirs.