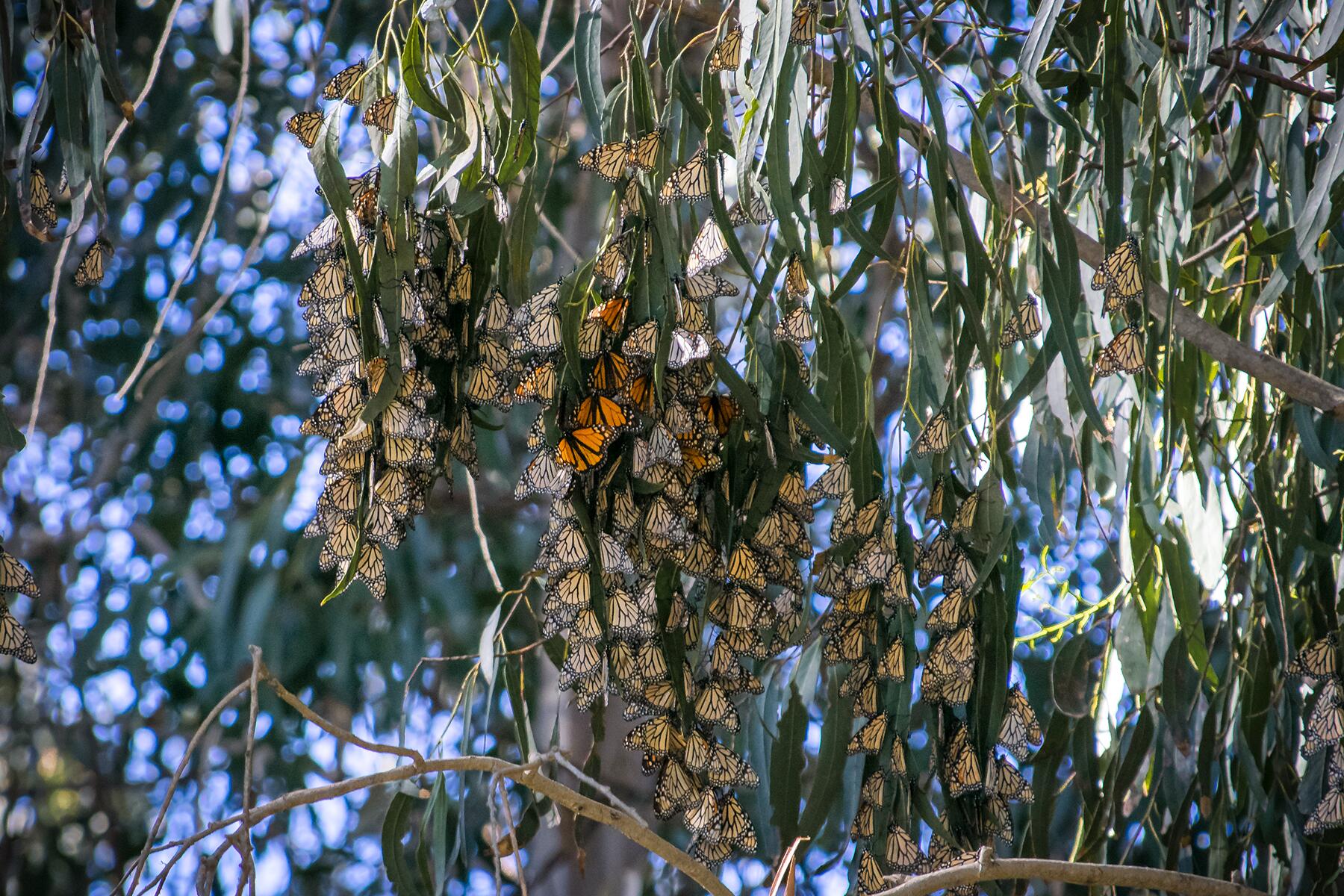 From the royal tiger to freshwater dolphins, these rare species aren’t found anywhere else in the world.

India is home to 104 national parks and 553 wildlife sanctuaries. It is rich with nature—its deserts, wetlands, forests, and coasts give shelter to about 8% of the world’s species, and new ones are found every year. Although the elusive cats and majestic elephants are the postcards of wildlife in India, there are many other creatures that inspire awe, like the Great Indian Bustard and barasingha. Is it any surprise then that a safari experience in the country is nothing short of a wildlife documentary?

However, like any other country in the world, India, too, is dealing with the loss of biodiversity. About 12% of wild mammals and 3% of bird species face extinction in India according to WWF-India—many are endangered and vulnerable. Conservation efforts have given a new lease to some and as per the UN, transformative change can protect nature even after so much destruction.

Responsible tourism helps in safeguarding natural habitats and communities that depend on nature, so plan a conscious trip to India and learn more about these species that are found nowhere else in the world (mostly). 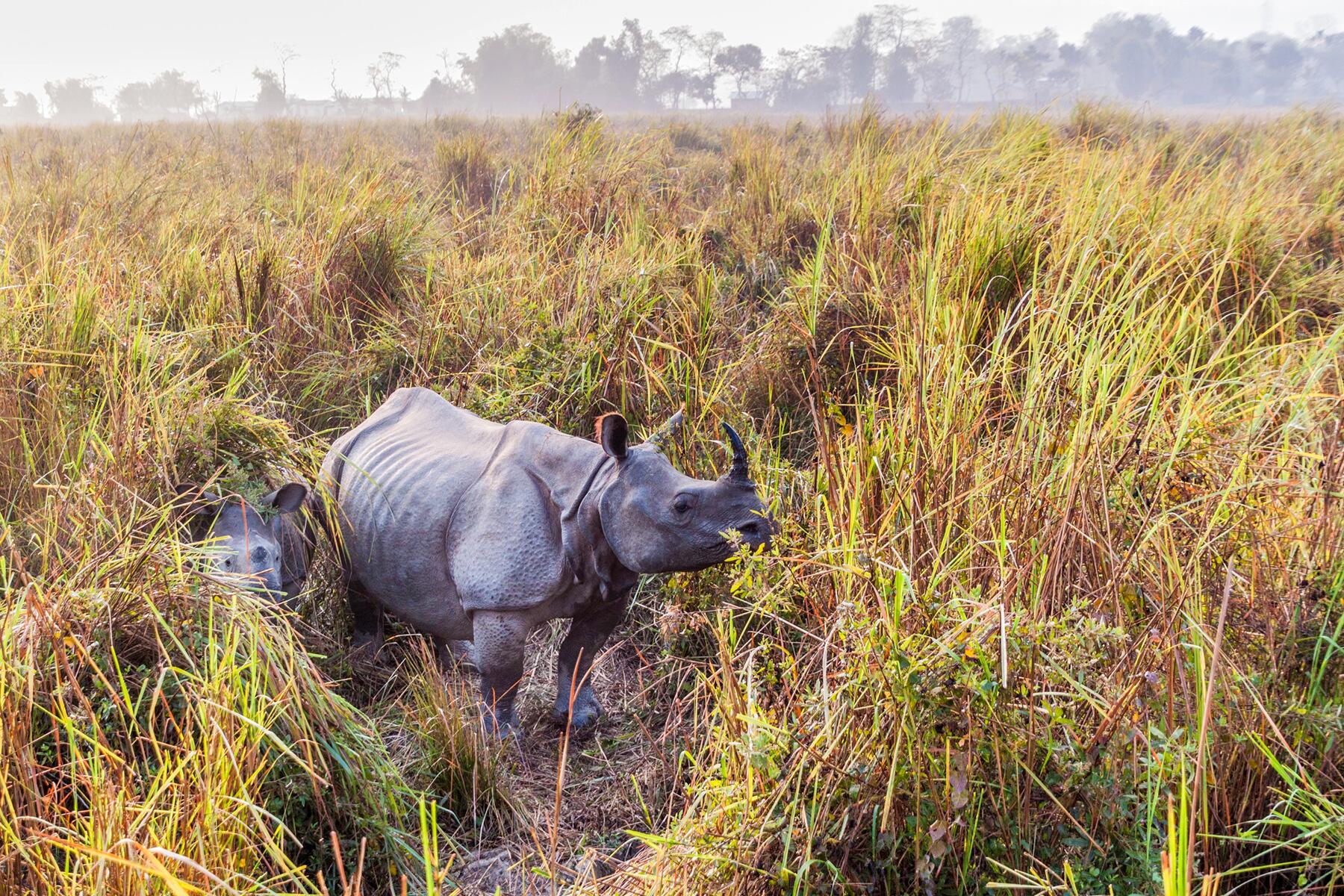 In the 20th century, the number of Indian rhinos was dwindling (less than 200 were left) and the species was listed as endangered. The characteristic horn of the Indian Rhino is the reason it needs protection from humans—it is poached for the valued horn, used for medicinal purposes in Asia.

Now with conservation efforts by both governments, the population is increasing and its status has been down-listed to vulnerable—the only large mammal in Asia to have changed its status. 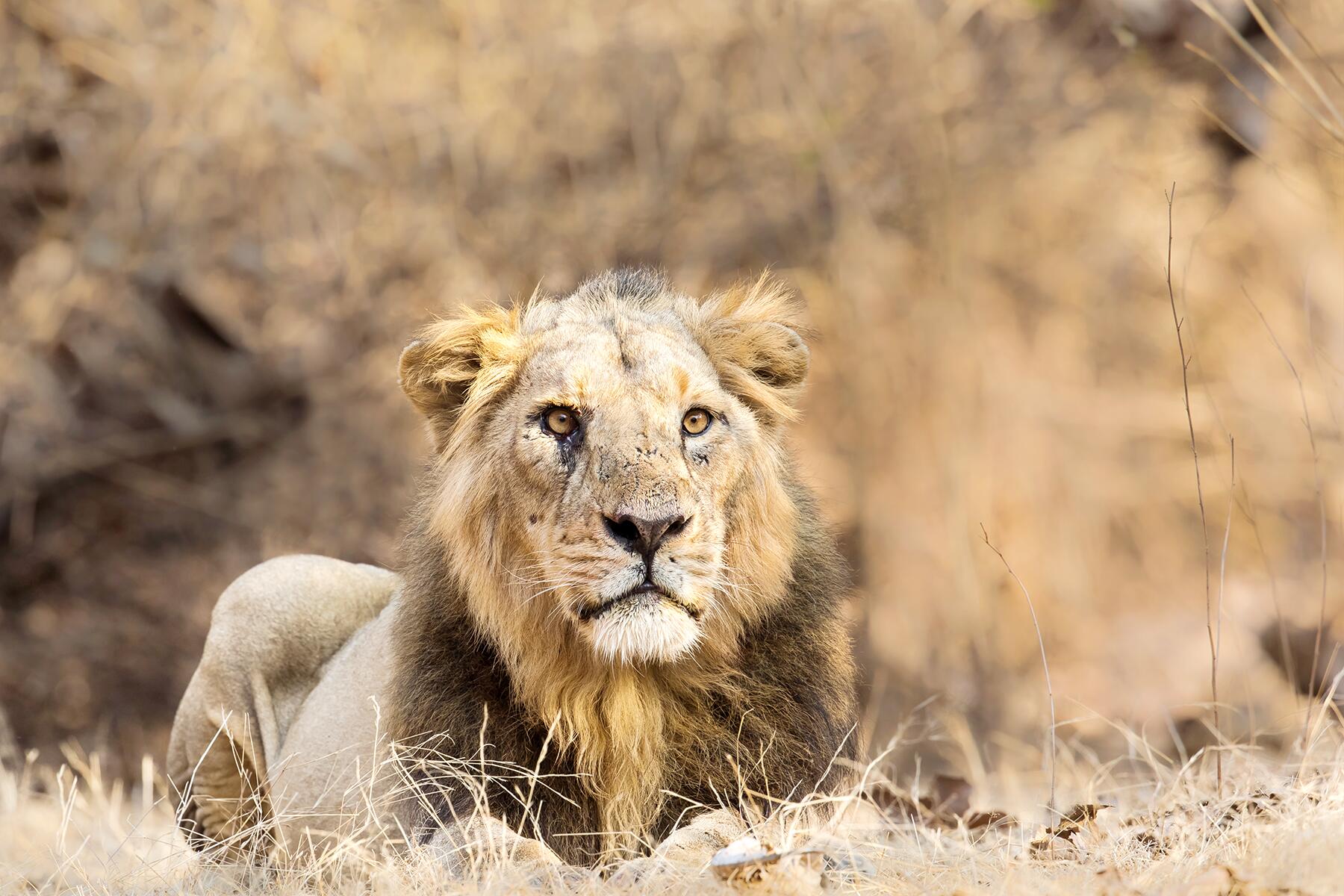 An endangered species, the Asiatic lion lives in the Gir National Park, Gujarat—this is the only population of this species that split from the African lions. They were once found in the Middle East as well as Madhya Pradesh and West Bengal, but due to excessive hunting and drought, there were just a few left in the early 20th century. It was then that the Nawab of Junagarh stepped in and banned the hunt.

Now Gir is the only abode for these big cats that are smaller than their African cousins. The population has risen from 284 in 1990 to 674 in 2020. If you’re lucky, you will be able to spot one of these well-loved animals in the Gir National Park while on a jeep safari.

The Gir Protected Area is too small for the growing population, which may lead to human-animal conflicts. There are efforts to relocate a few to a wildlife sanctuary in Madhya Pradesh to save the species from extinction, in case of an epidemic in Gir. 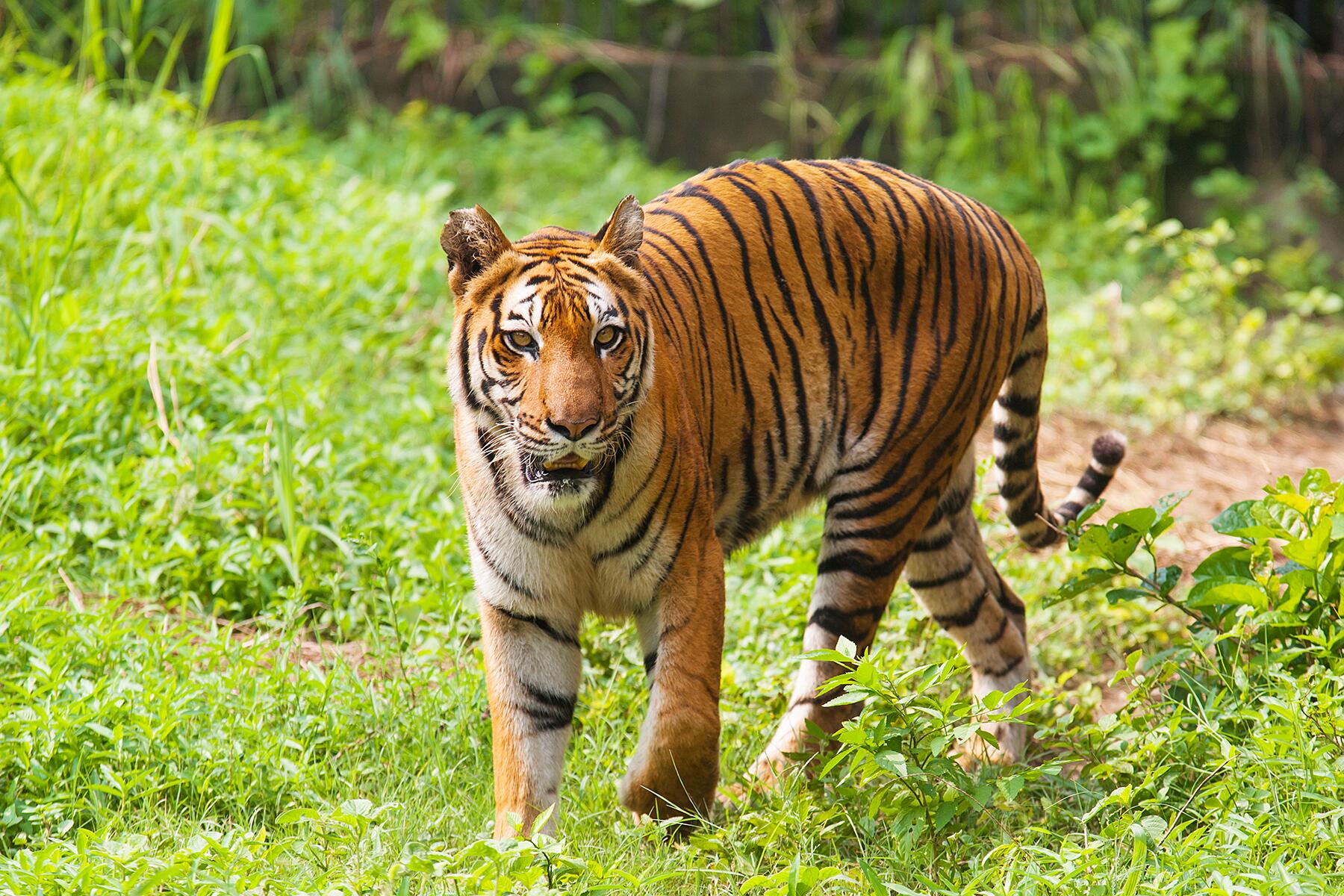 Remember Richard Parker in the Life of Pie movie? The CGI tiger was a central character—and the striped Royal Bengal tiger is just as important to the story of India.

India has more than 70% of the tiger population, with 50 tiger reserves and more than 3,000 tigers. There are few that live in China, Bhutan, and Nepal. As the national animal of India, it enjoys a special status in the country and draws tourists from all over the world to its national parks and sanctuaries.

INSIDER TIPStay at an eco-friendly safari lodge for the ultimate wildlife experience. Aman-i-Khas on the edge of Ranthambore, Diphlu River Lodge close to Kaziranga, Baghvan near Pench, and The Serai Bandipur are great choices! 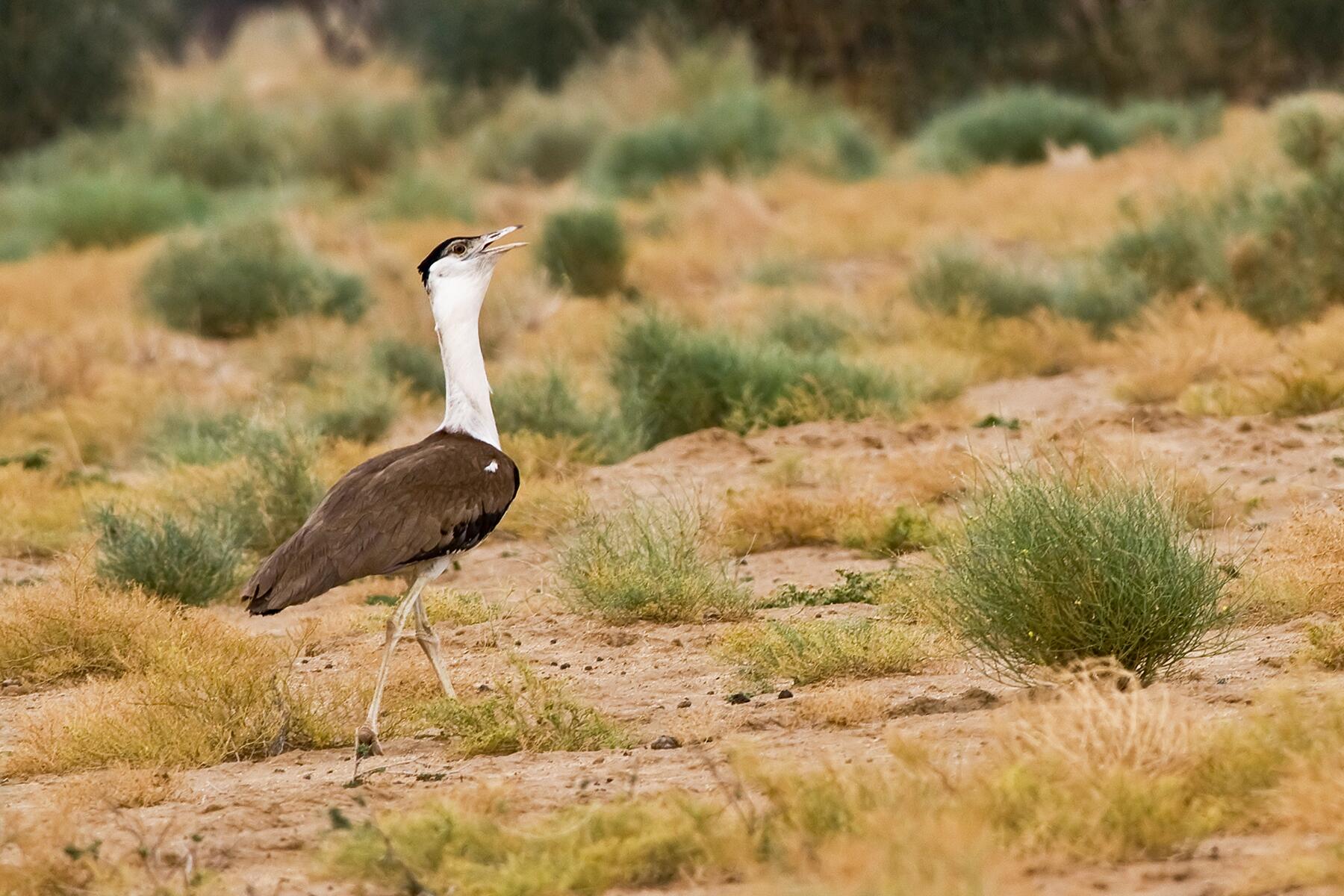 WHERE: Rajasthan and Gujarat

There are only 150 great Indian bustards in the world now. It is one of the heaviest flying birds but prefers flat, dry grasslands and is known to be shy. Once thriving in the Indian subcontinent, hunting of the bird has brought it to the brink of extinction—it is still prevalent in Pakistan. Like other animals, their population has been threatened by hunting and poaching. And, because the bustard has poor eyesight, collisions with power lines, windmills, and electric poles have also caused their numbers to dwindle.

They were found in 11 Indian states as well as Pakistan (the consensus was 1,260 in 1969). Now 122 of these are found in Rajasthan and the local communities are working with the authorities in conservation efforts. So your best chance of spotting the bird is at the Desert National Park near Jaisalmer, where a captive breeding program is raising the number.

WHERE: Karnataka, Kerala, and Tamil Nadu

In the rainforests of the Western Ghats of India, you will find these primates in the trees, distinct due to their leonine tail. The lion-tailed macaques are known to be arboreal in nature—they love the trees and feed off them. With about 3,000 to 4,000 left in the wild, they are also living with the challenges of human encroachment. It is believed that their behavior is changing as the rainforests disappear and they are becoming dependent on humans for food, coming down from the shadows of the trees to scavenge.

As per a report by Mongabay, the best places to spot these monkeys are the Silent Valley National Park in Kerala, the Anamalai Tiger Reserve in Tamil Nadu, and the Sharavathi Wildlife Sanctuary in Karnataka.

INSIDER TIPWild Karnataka, a documentary on Karnataka’s diverse wildlife, gave an insight into the bounty of the state’s natural gifts, but it failed to mention human impacts. It was widely criticized for it. 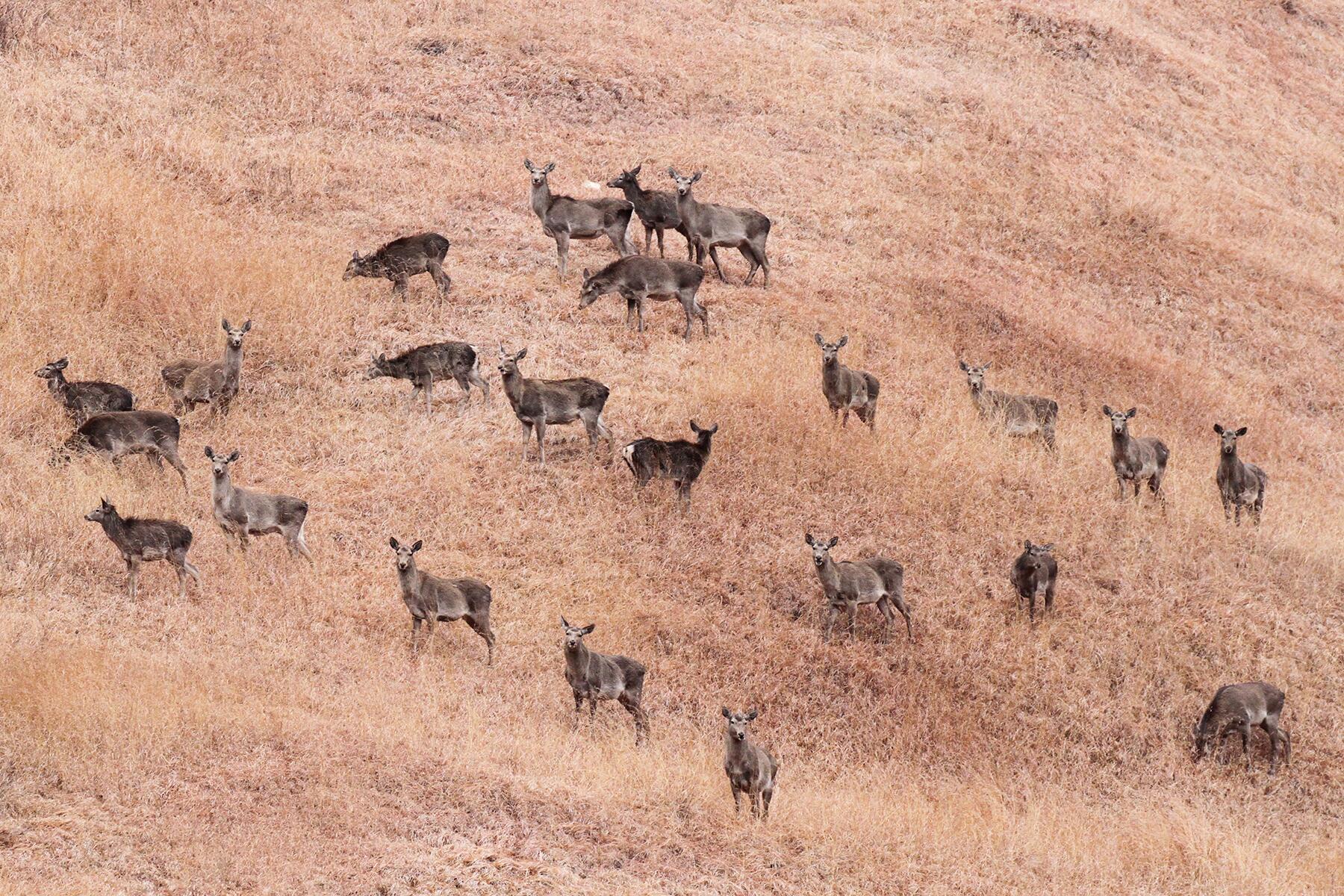 WHERE: Jammu and Kashmir

The Kashmir stag or hangul is a sub-species of the European red deer and is confined to the Dachigam National Park. This stag with giant antlers is the state animal of Jammu and Kashmir. In the 1900s, there were about 3,000-5,000 of these species found in Jammu and Kashmir and Himachal Pradesh, but today, about 150 remain in the state. The biggest conservation challenge for the hangul, other than human habitation, has been dogs! 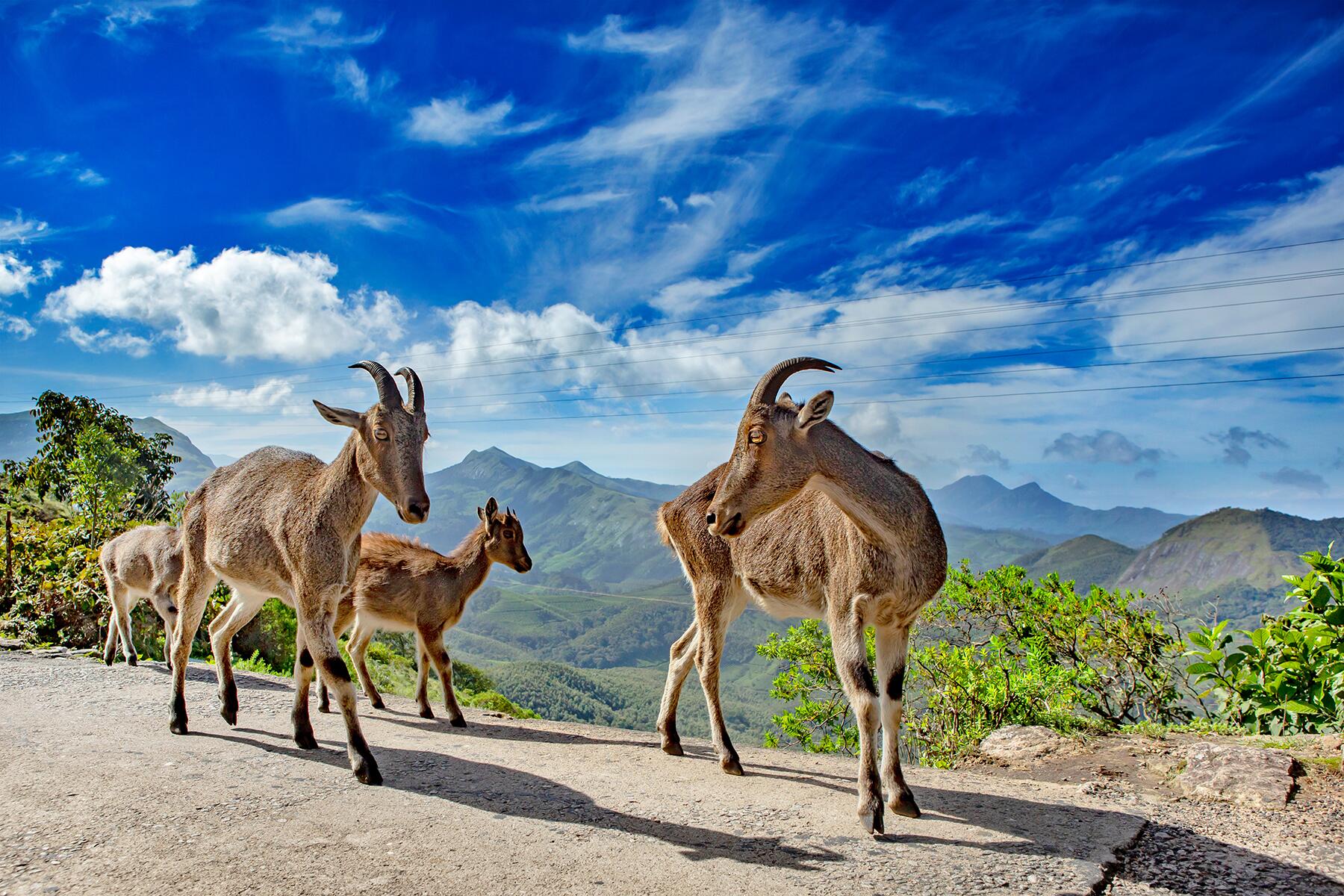 WHERE: Tamil Nadu and Kerala

The Western Ghats are home to this elusive goat that lives at an altitude of about 6,500 feet. These tahr, with a population of about 3,000, were everywhere in the Western Ghats once upon a time, but now can be seen in the Nilgiri Hills, Anamalai Hills, and other southern parts of the Western Ghats.

The Nilgiri tahr is the only mountain ungulate in India and if you want to spot one, drive to the Eravikulam National Park in Kerala which has its largest population in the world. 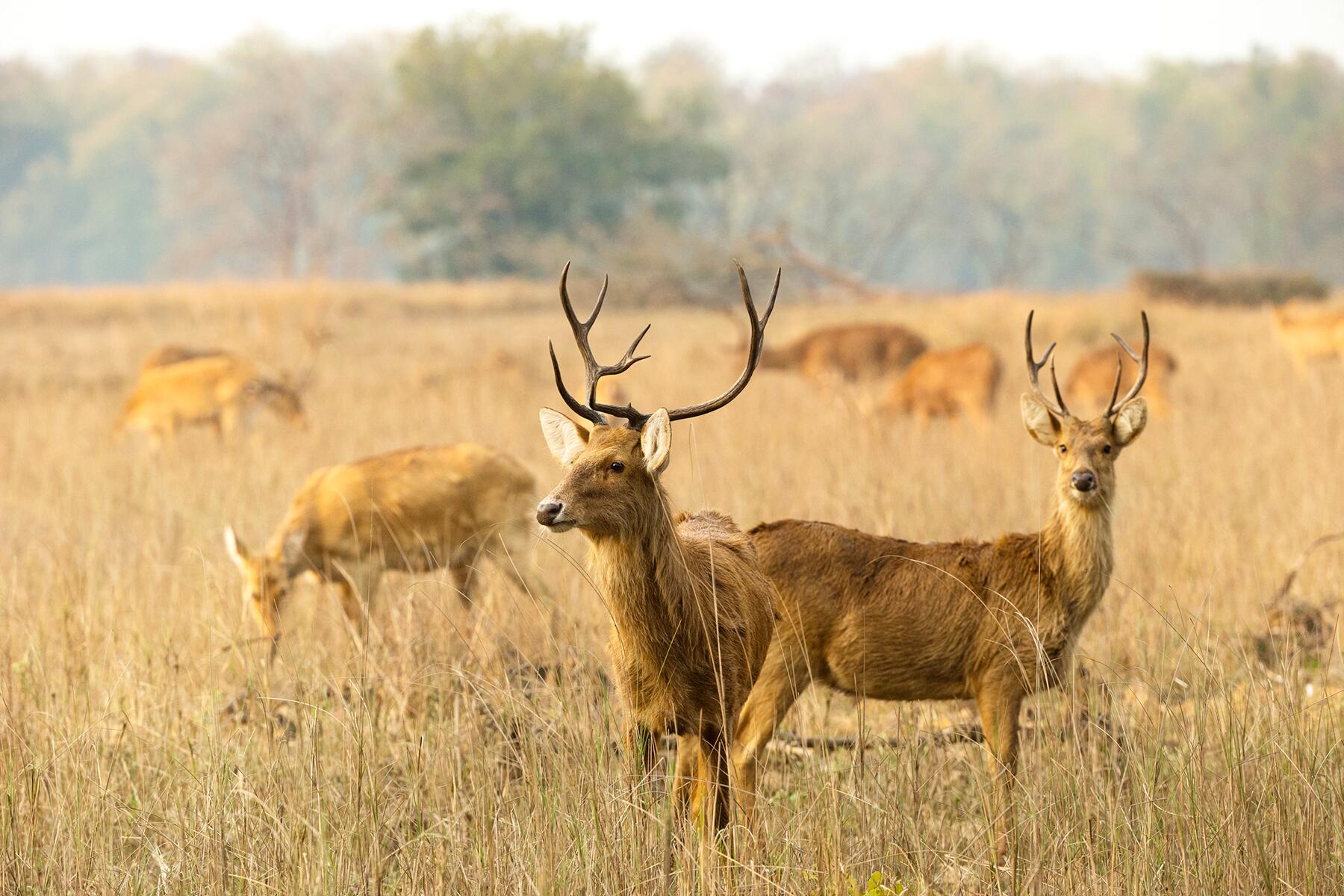 Barasingha, a 12-horned swamp deer (bara = 12 and singha = horns), lives in the Kanha National Park in Madhya Pradesh. The state animal of Madhya Pradesh almost went extinct in the 1960s, but the population has grown after consistent effort—there are now 800 of them in the park, which is also the home of the tiger. They are extinct in Bangladesh and Pakistan, but a small population has managed to survive in Nepal.

In India, you can also spot them in Satpura Tiger Reserve in Madhya Pradesh and Kaziranga National Park in Assam.

It may be very difficult to follow the birdsong of this rare robin, but the Eravikulam National Park in Kerala and the Anamalai Hills in Tamil Nadu are the best bets. 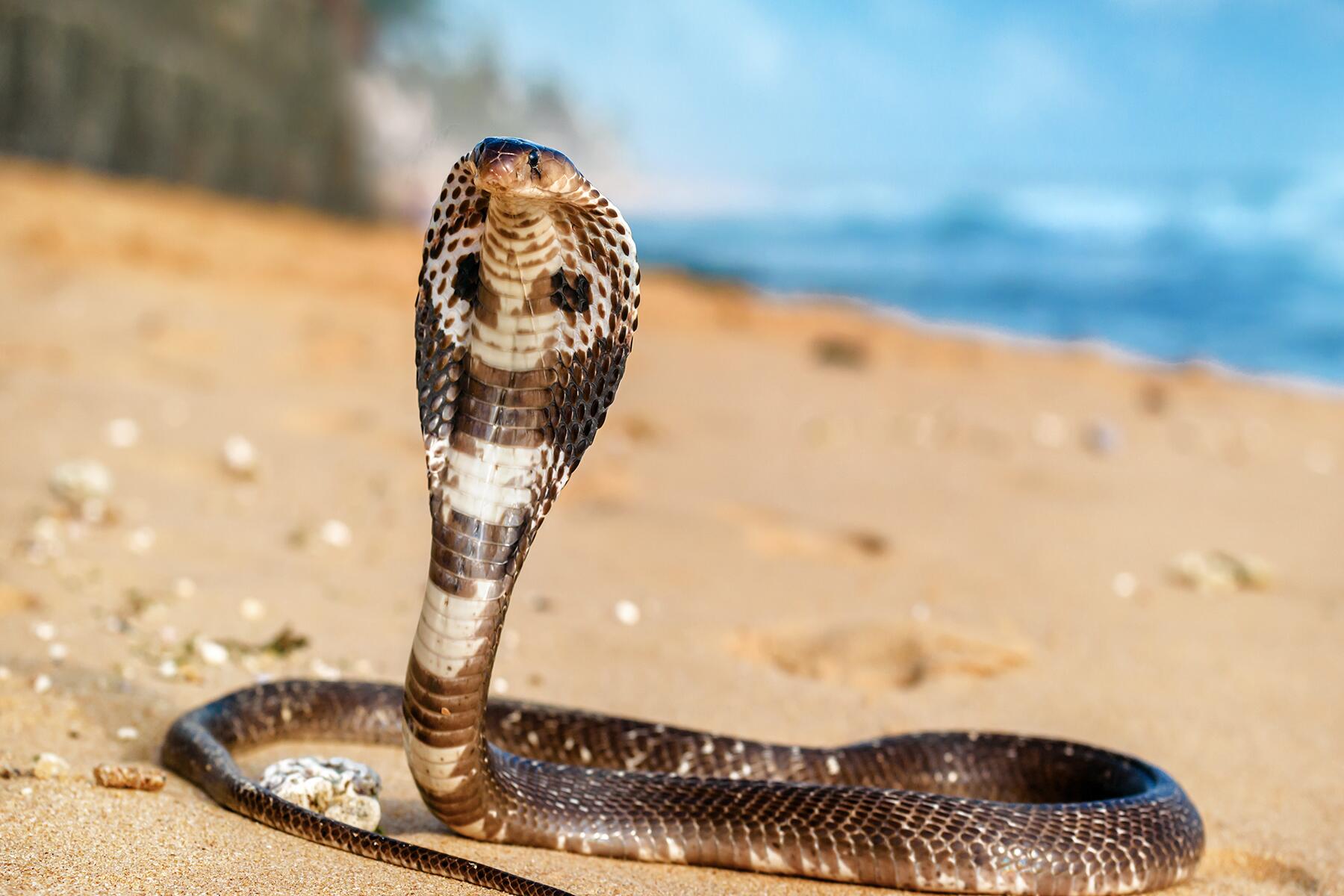 The Andaman and Nicobar Islands have a variety of species, including turtles, cobras, macaque, and turtles. The islands have fragile ecosystems, and out of the 572 islands, only 36 are inhabited. Nicobar is completely out of bounds for tourists, but on the Andaman, wildlife lovers can explore Mount Harriet National Park, a short distance from Port Blair, that’s known for its biodiversity.

The cobra species, eponymous to the island, is a venomous snake that’s part of this diverse ecosphere. Out of the 76 reptile species found on these islands, 24 of them are endemic. 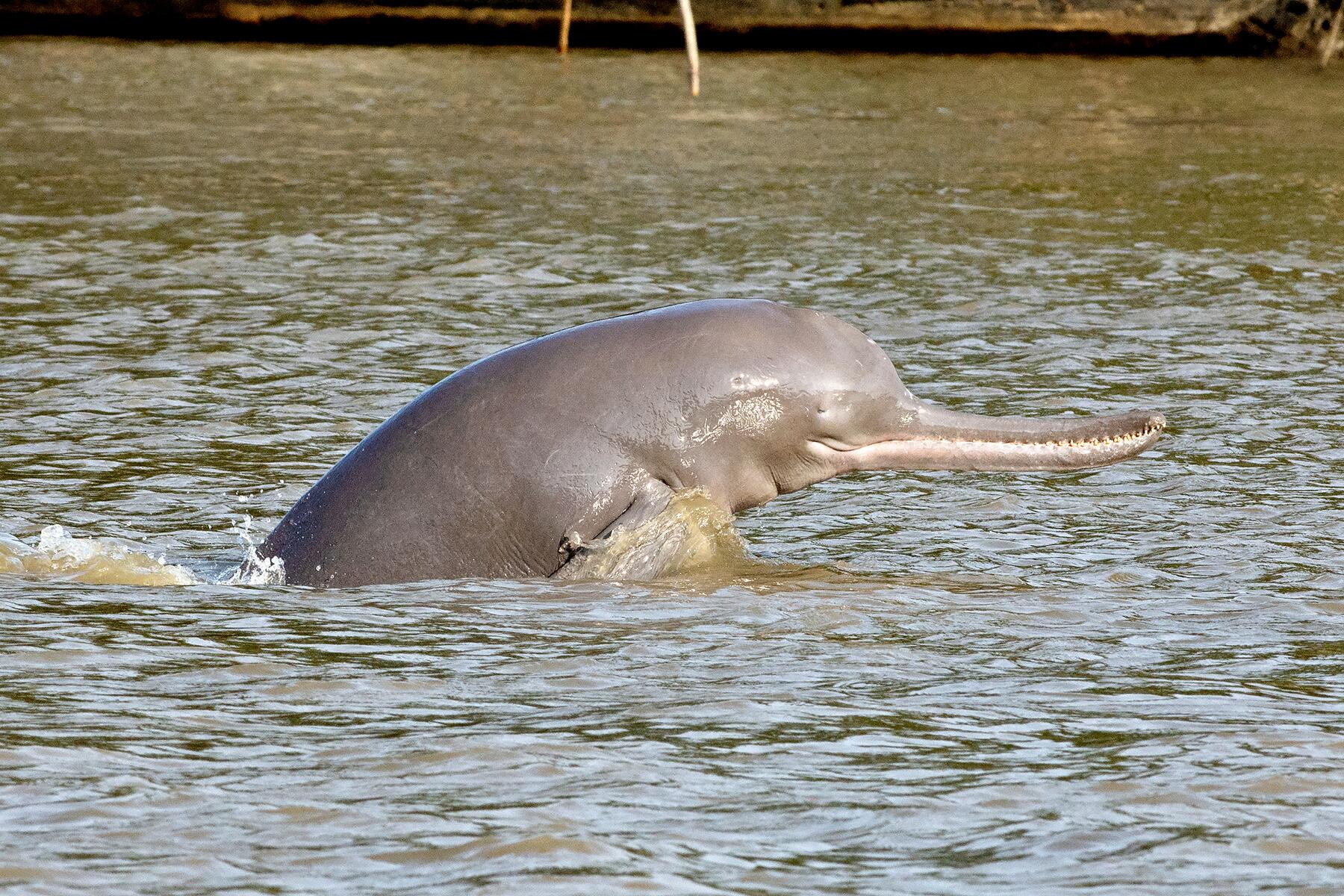 The Ganges river dolphin is another endangered species found in freshwater rivers in India. It is the national aquatic animal of the country. The dolphins were once plentiful in Rivers Ganga and Brahmaputra, along with their tributaries in India, Nepal, and Bangladesh, but as the freshwater flow has decreased, the numbers have reduced considerably.

There may be 3,750 dolphins in the Ganga river system in the three countries. Now travelers can go on dolphin safaris with trained volunteers in the river in Bihar, Uttar Pradesh, and West Bengal. The government of India launched an ecotourism program on October 5, Ganga River Dolphin Day, to raise awareness about this aquatic animal.

Nice article. However, the title and preface are deceptive given that -- the article itself states that -- some of these animals are also found elsewhere in the subcontinent. Clickbait?