Resist the urge to pet the panda-dog.

In order to stand out from the crowded pet café marketplace, the Cute Pet Games café, which recently opened in Chengdu, China, landed on a way to distinguish themselves. The star attractions of their café would be six chow chow dogs with purposefully dyed markings that make them look like pandas.

Now, pandas are cute. Chow chows are cute. So when presented with the image of a chow chow that has the markings of fluffy little panda cub, your brain is going to immediately going to start sending signals carrying such messages as “Cuddle the panda-dog!” and “If you do not cuddle the panda-dog, the deprivation will cause you to perish from this earth!” Even science is inclined to agree, we can’t help but adore animals that are round, soft, and fuzzy—traits they share with human babies. And pandas are particularly round, soft, and fuzzy. So, if your first response to seeing a chow chow that looks like a panda is “Dang, that’s cute!”, just know that you’re only human.

But in order to achieve the effect, the dogs’ fur was dyed by humans. After a video of the panda-dogs went viral, the café received a deluge of backlash, prompting them to make a post on their Weibo page stating that the dyes were plant-based, the dogs’ fur and skin were unaffected, and that they would no longer offer the dyeing service.

However, even in the least damaging scenario possible—100% free of chemicals/irritants/allergens—the experience can still be stressful for the animals, and if the process involves a lot of water, breeds with floppy ears would become more susceptible to ear infections. Plus, this trend could inspire copycats attempting to dye pets with chemical-based products that could hurt the animals. It may seem like common sense to not dye a dog using products meant for humans, but this is exactly the kind of mistake people have made and with tragic results.

If what you want to do is see something that looks like a panda in Chengdu, boy do we have good news for you: the Chengdu Research Base of Giant Panda Breeding is just a 45-minute drive from the heart of the city. 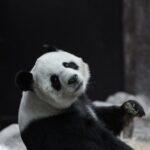 RELATED STORY
Pandas 101: Everything You Need to Know About Visiting ‘Large Bear Cats’ in Chengdu, China

There you can see all kinds of actual pandas, plus your admission goes toward funding the breeding program, ensuring the creation of future panda cubs that you can fawn over (from a respectable distance) as they dine on bamboo and cause adorably clumsy chaos.